We don’t see this very often, but the tropical region is facing two merging cyclones this week. A so-called Fujiwhara effect of tropical cyclone Seroja and Odette revealed a spectacular satellite view. Seroja will be a dominant feature of both and turns towards western Australia with an extremely dangerous landfall with severe winds and flooding on Sunday.

A rare weather phenomenon is developing off the West Australian coast this week. Tropical Cyclone Seroja and another tropical low Odette off the coast of Western Australia are merging together and are expected to bring heavy rain to the state’s north this week.

When tropical systems get close to each other, they interact and circulate around each other, which is known as the Fujiwhara effect. 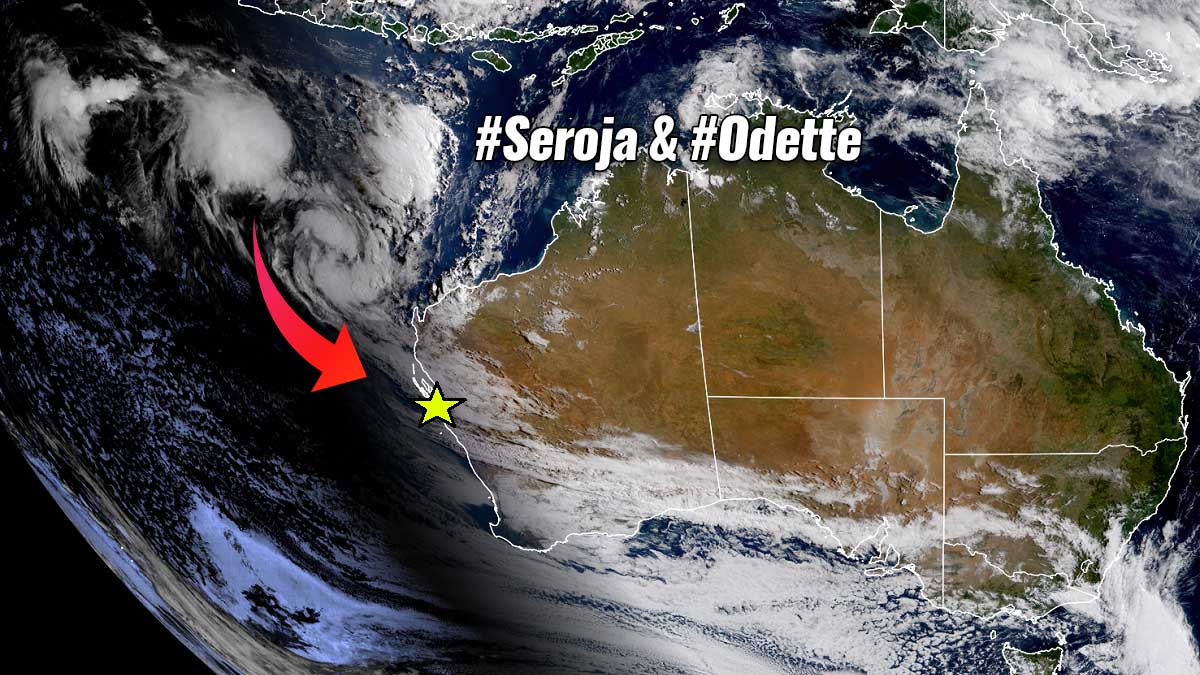 The Fujiwhara effect can make forecasting track and intensity even more challenging, as a number of weather scenarios can occur with the general track and also intensity. One system typically becoming more dominant and overtakes the weaker one.

On rare occasions, the two systems can combine into one larger and intense system (as is this case), or they destroy each other. Tropical Cyclone Seroja reaches a Category 3 intensity this weekend, while the tropical low is expected to be of much weaker intensity.

People between Onslow and Coral Bay, including tourism hub Exmouth, are urged to be prepared.

Tropical Cyclone Seroja continues to track to the southwest over open waters, located well to the west of the North West Cape. Seroja continues to intensify until mid-Saturday when it reaches its peak intensity. On Sunday the tropical system accelerates while taking a southeast track and weakening slightly as it approaches the central west coast.

Weather conditions will change and deteriorate rapidly near the west coast on Sunday as Seroja approaches the coast, making landfall late Sunday or early Monday between Carnarvon and Jurien Bay. The cyclone should gradually weaken as it moves inland on Monday but still likely to be causing gusty winds east and north of the track.

Some rain is also expected across the south of the state during the rest of the week, according to the BOM.

WHAT IS A FUJIWHARA EFFECT?

The official description of the Fujiwhara effect by NOAA stands:

When two hurricanes spinning in the same direction pass close enough to each other, they begin an intense dance around their common center. If one hurricane is a lot stronger than the other, the smaller one will orbit it and eventually come crashing into its vortex to be absorbed.

The storms closer in strength can gravitate towards each other until they reach a common point and merge, or merely spin each other around for a while before shooting off on their own paths. But often, the effect is additive when hurricanes come together, and we usually end up with one massive storm instead of two smaller ones. 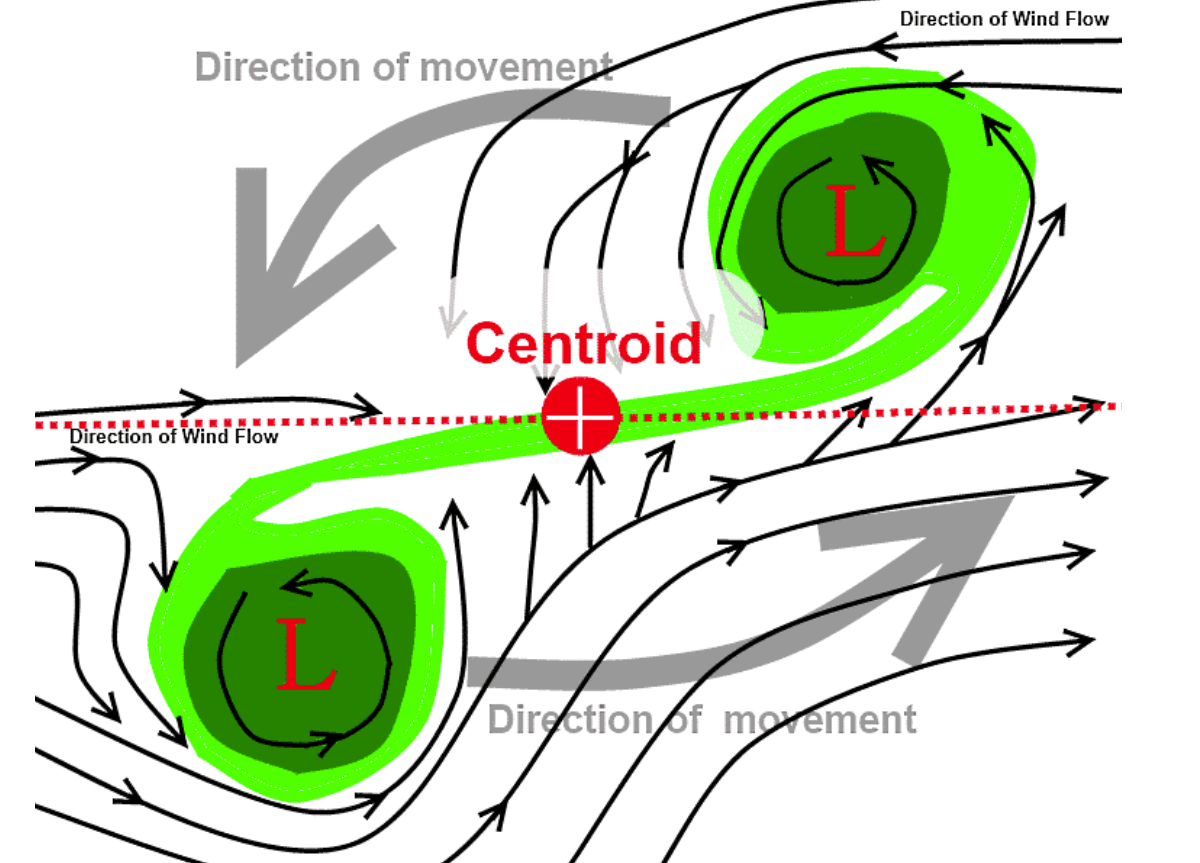 The Fujiwhara effect was named by Sakuhei Fujiwhara, a director of the Central Meteorological Observatory of Japan. Mr. Fujiwhara was the first person to describe the interaction of vortices in water in his scientific paper, published 100 years ago, in 1921.

He observed the properties of spinning phenomena of whirlpools and cyclones and saw when two or more were close to one another. They could affect each other; their speed, strength, and the future track. The same effect can occur when two tropical systems get close enough – roughly 900 miles (1450 km) of each other. 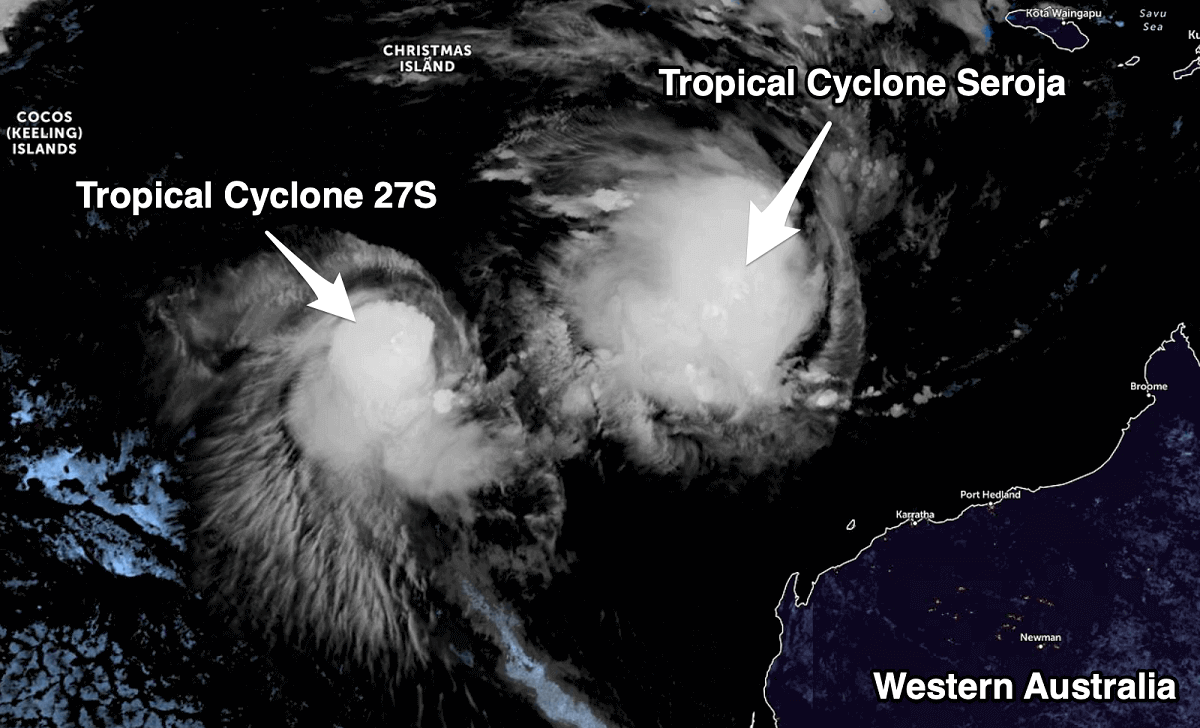 Normally, to get the Fujiwhara effect, we need two storms to pass relatively close to each other. Meaning, that they have to pass close enough that both storms absorb the other into their circulations, simultaneously. When this interaction occurs, each system carries the other around itself.

When two tropical systems come close to each other, there is one that is usually much stronger than the other one. The upper-level outflow ventilation winds from the stronger storm rip the thunderstorms from the weaker system to shreds. In the case of this event, the Tropical cyclone Seroja is dominating Odette and kills it.

So this effect causes the smaller system (Tropical cyclone Odette) to collapse and eventually its death. So the larger tropical storm continues, depending on the environmental conditions it is feeding on.

Seroja and Odette are orbiting each other in a clockwise direction, which should cause Odette to swing around and pass close to the northwest corner of Western Australia on Saturday. 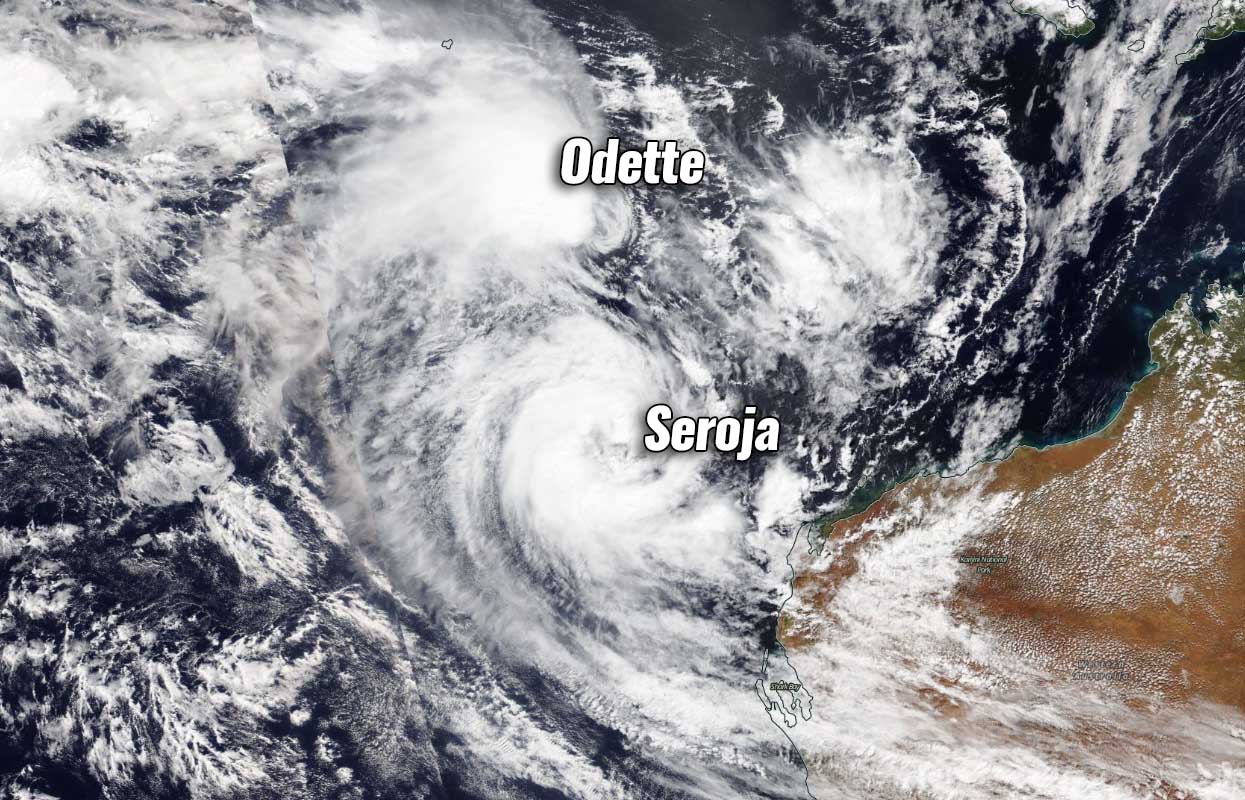 It is very rare that the Fujiwhara effects lead to merging cyclones into one “mega-storm” or similar. Everyone remembers “The Day after tomorrow” movie? Well, we will not be seeing that kind of system, but according to the weather models, tropical cyclone Seroja will significantly gain its strength this weekend and maintain a strong Category 2 or a Category 3 intensity.

Typically, when tropical systems meet during the Fujiwhara effect, the interaction of both is destructive. A strong interference of low-level wind circulations and an increase in upper-level wind shear is something that tropical storms don’t like to interact with. When this happens, they soon evaporate. 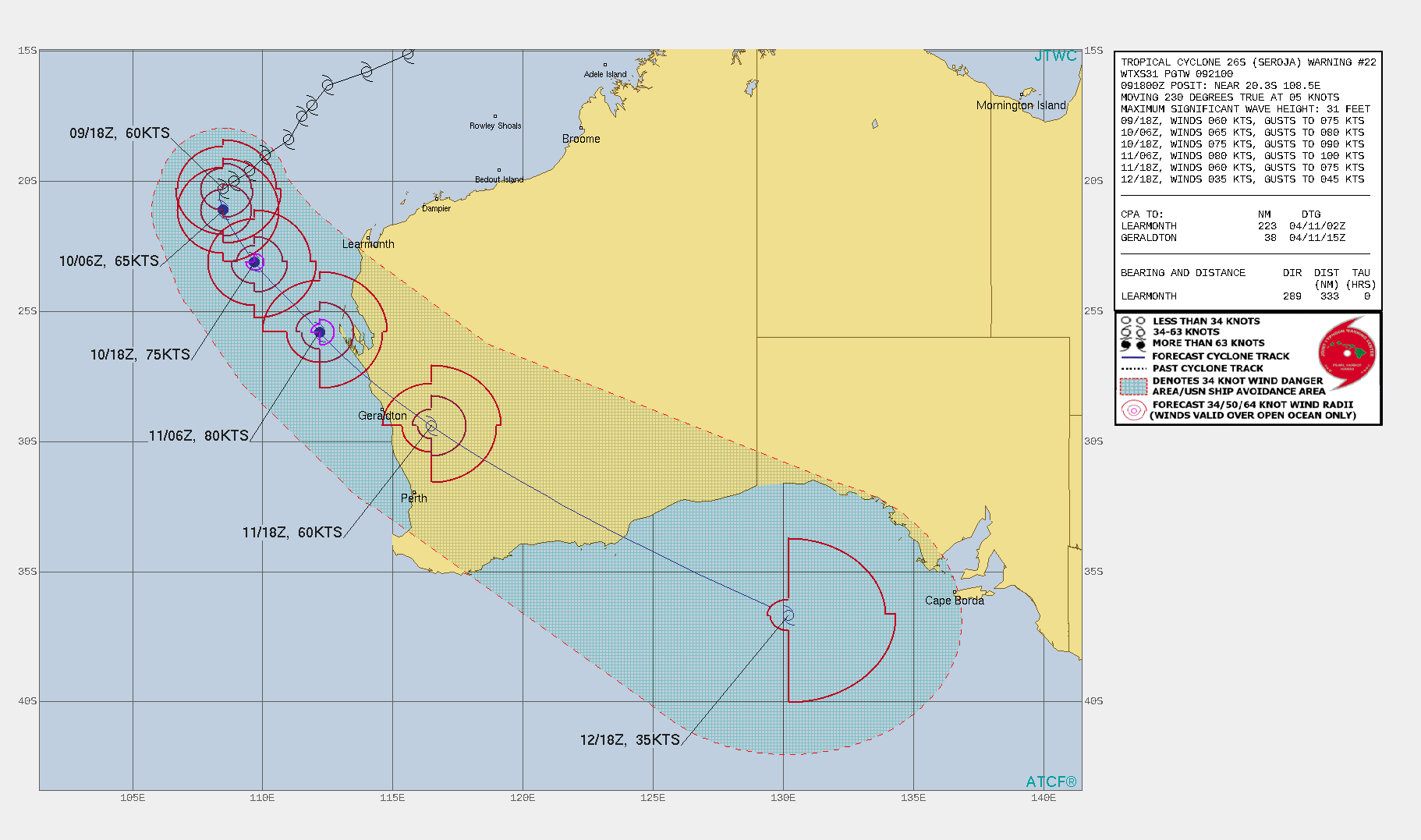 The satellite also reveals improved convective structure with deep convective banding over the western semicircle wrapping into a microwave eye feature, which supports the initial position with high confidence.

Environmental analysis indicates favorable conditions with low vertical wind shear, robust poleward outflow into the westerlies and warm sea surface temperatures of around 29-30 °C are present along the west-northwest of Australia. 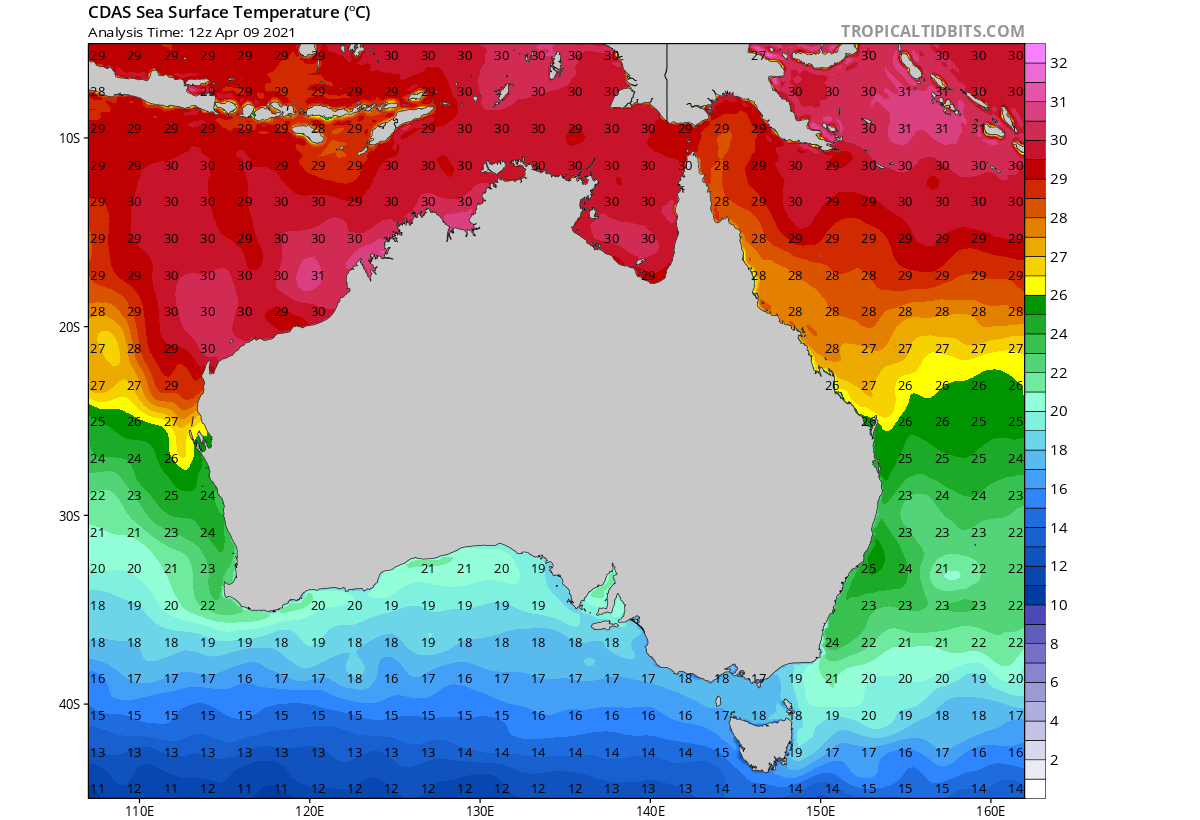 The initial intensity is assessed at 60 knots based on an average of Dvorak intensity estimates, also additionally supported by a SatCon estimate of 58 knots.

Tropical cyclone Seroja is expected to recurve over the next 12 hours and accelerate south-southeastward with extra-tropical transition coming on Sunday morning as the system begins to interact with the baroclinic zone and westerlies. Seroja will then turn southeastward over Southwest Australia, tracking within the mid-latitude westerlies. 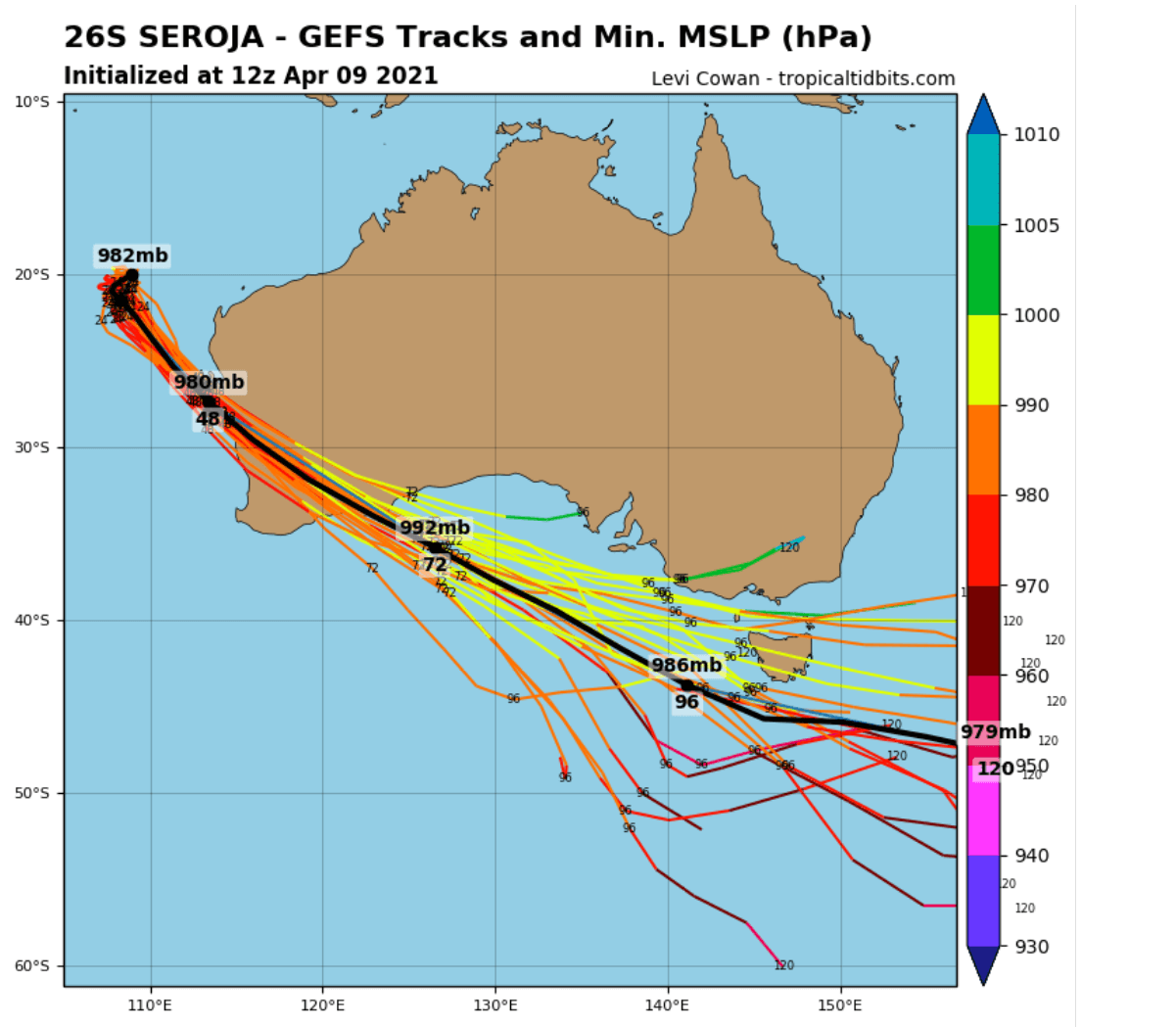 The tropical cyclone will complete its extratropical transition on Sunday during the day when it becomes embedded within the jet region and gains frontal characteristics. Seroja will weaken significantly after it encounters strong vertical wind shear and interacts with the land of western Australia.

Modeled wind swath suggests that the approach of tropical cyclone Seroja will include severe winds, potentially becoming violent prior to the landfall of the system on Sunday. Wind gusts will be dangerous along the coast, possibly with gusts 140-170 km/h at the landfall. 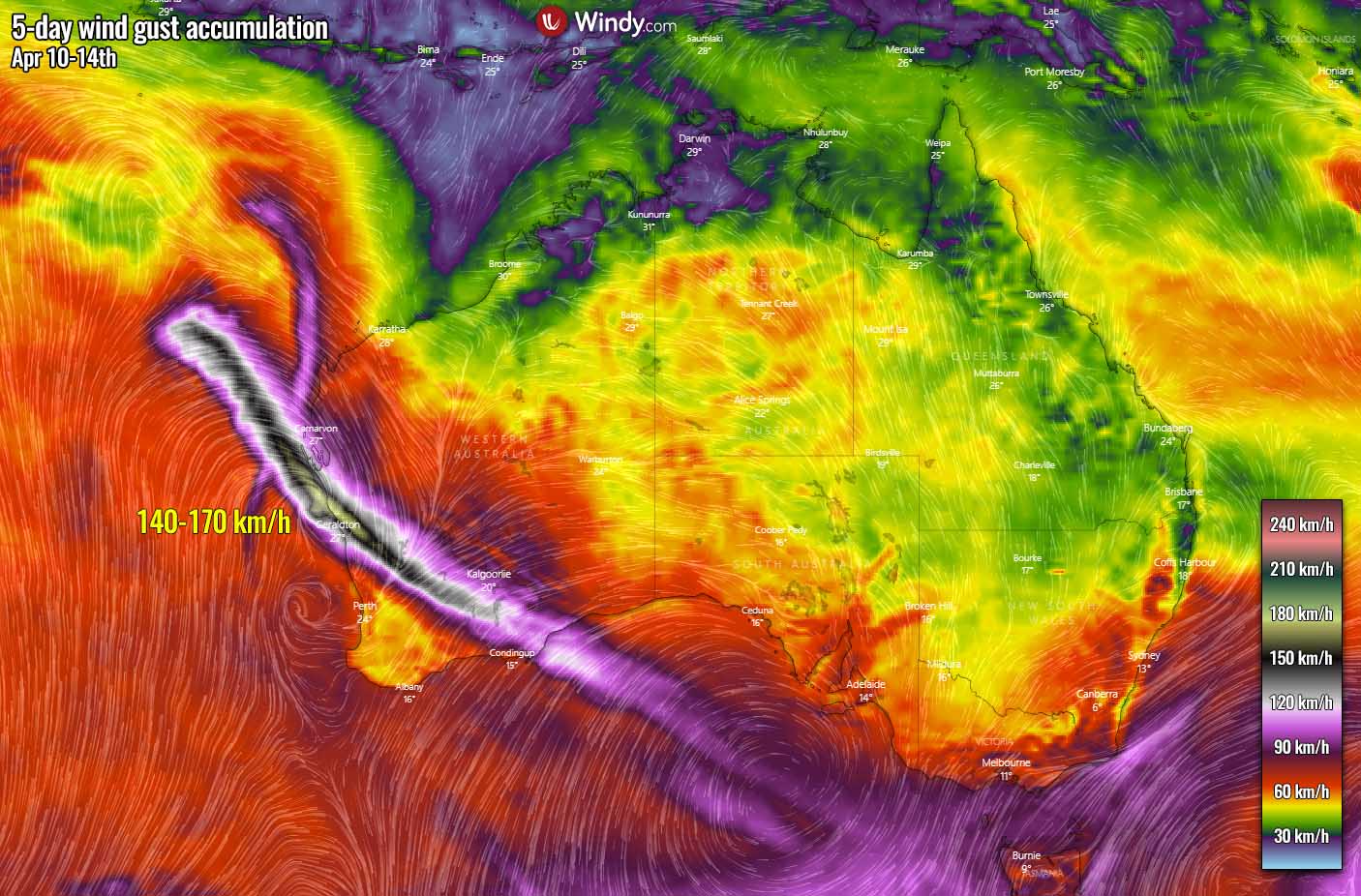 Seroja is expected to come ashore between Geraldton and Kalbarri. Very intense rainfall with a high risk for flash floods will be accompanied by storms within the system.

The main weather hazards include:

1. GALE-FORCE WINDS with gusts to 100 kilometers per hour are likely to develop in an area between Coral Bay and Kalbarri during Sunday. Gales will extend further south towards Lancelin and inland into the Gascoyne and northern Wheatbelt later Sunday and then further inland to the southern Goldfields during Monday.

2. SEVERE DESTRUCTIVE WINDS with gusts to 150 kilometers per hour are forecast to occur closer to the center of Seroja as it moves across the coast and into adjacent inland parts.

3. HEAVY TO INTENSE RAINFALL and FLASH FLOODING are likely close to the track of Seroja during Sunday and Monday.

4. VERY HIGH TIDES could cause minor flooding at the coast between Coral Bay and Lancelin, increasing to be SERIOUS FLOODING in the Denham and Shark Bay region.