There are now 6 tropical systems ongoing in the Atlantic tropical region. Tropical Storm Sally, located near the Florida Keys is expected to significantly intensify over the Gulf of Mexico and head for a destructive landfall as a hurricane at the Gulf Coast.

The system could possibly bring destructive flooding, storm surge, and hurricane-force winds into the Gulf Coast of Louisiana, Mississippi, Alabama, or southwest Florida.

Gulf Coast under a hurricane watch

Hurricane Watch has been issued from Grand Isle, Louisiana to the Alabama/Florida border, including Metropolitan New Orleans for Tuesday.

There is a mandatory evacuation order for residents outside of the New Orleans’ levee protection system, for the areas of Venetian Isles, Irish Bayou, and Lake Catherine.

Tropical Storm Sally has formed near southern Florida and southeast portions of the Gulf of Mexico today. It is currently packing winds of 35 knots (40 mph) with the minimum central pressure of 1004 mbar. 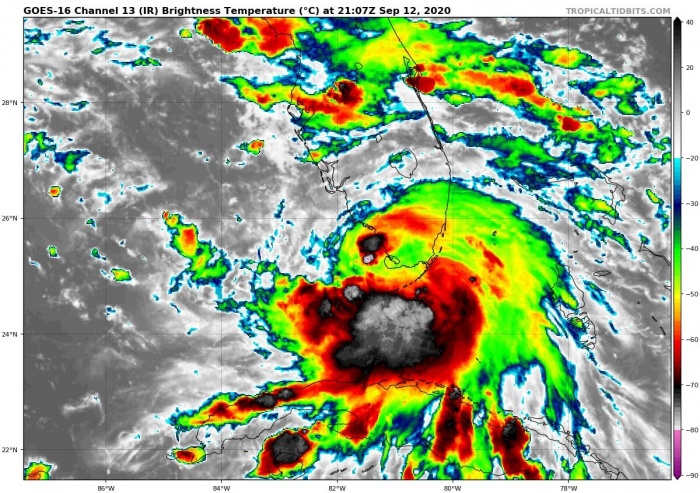 Sally has set the new record – the earliest 18th named storm of the 2020 Atlantic hurricane season. Breaking the previous record set by Stan back on October 2nd, 2005.

Both Infrared and Visible satellite channels are indicating that fuel for the storms is very high. Explosive storms are ongoing around the forming/deepening low around the Florida Keys and the southeastern Gulf of Mexico. 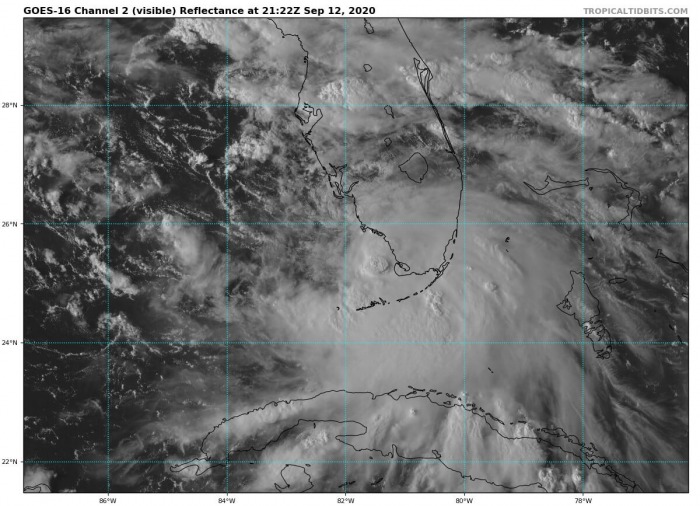 The water vapor imagery indicates the upper-level outflow ventilation is healthy. With an expanding cirrus in all directions. This is calling for a very favorable environment for further strengthening on Sunday and Monday. 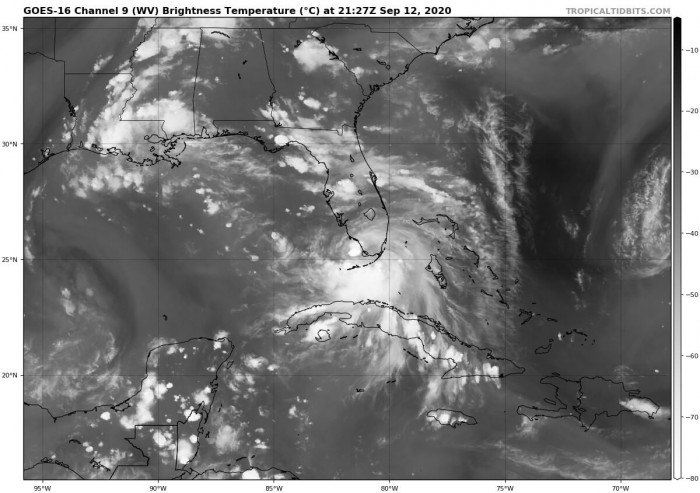 Sally continues to gradually become better organized, with developing convective banding features primarily over the southern portion of the circulation at this time.

Favorable warm waters of the Gulf

Very warm 30-31 °C Gulf of Mexico sea waters are observed, which will support fuel for explosive storms associated with Sally. A faster rate of intensification is forecast to begin on Sunday. And potentially rapid on Monday into Tuesday when the systems will be approaching the Gulf Coast. 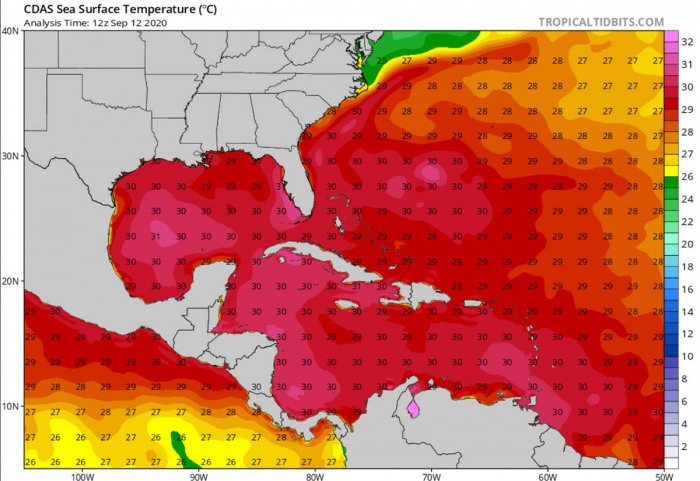 Tropical waters of the Western Atlantic and the Gulf of Mexico are well above the long-term average, from 1-2 °C above normal. 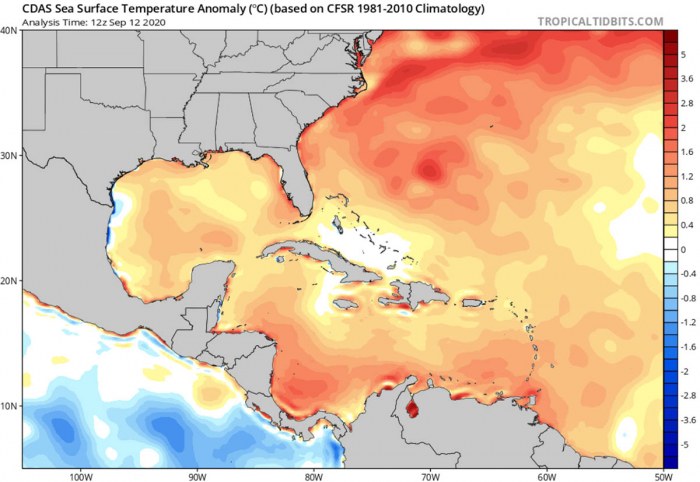 Weather models are hinting Sally to become a hurricane by Monday while moving toward the Gulf Coast. The landfall is likely somewhere between New Orleans (Louisiana) and Panama City (Florida) by Tuesday. 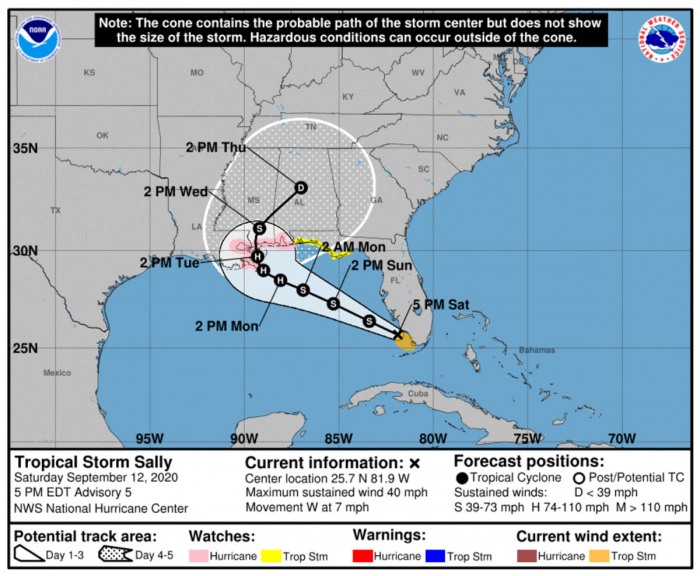 Flash, urban, and minor to moderate river flooding is likely across portions of the central Gulf Coast from Sunday through the middle of next week.

Here is NAM-model forecast for the wind potential along Sally while moving from southern Florida across the Gulf of Mexico towards the coast of Louisiana:

Very warm waters and a moist tropospheric environment ahead of Sally suggest that strengthening is likely. Sally will become a hurricane on Monday. 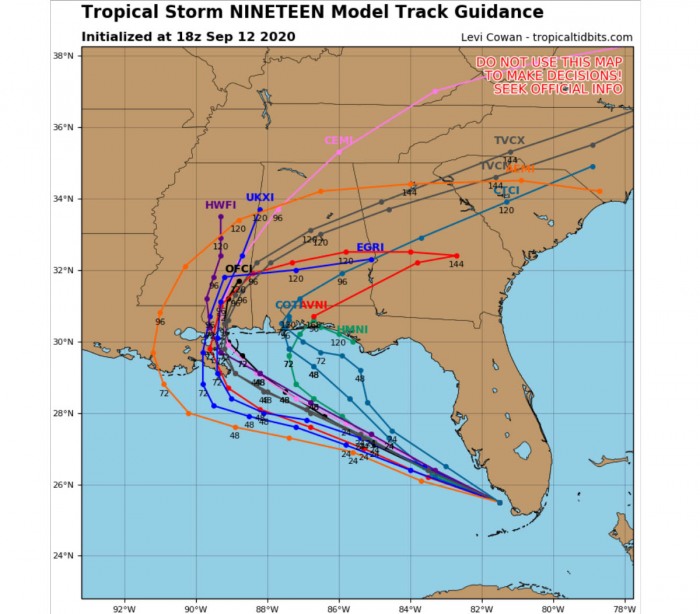 Some increase in westerly shear over the northern Gulf in 48-72 hours could at least slow down the intensification process around that time.

Sally will likely reach at least a solid Category 1 strength, NHC is forecasting 75 knots (85 mph) prior to landfall on Tuesday. However, some models are rising the potential that Sally could become even stronger. 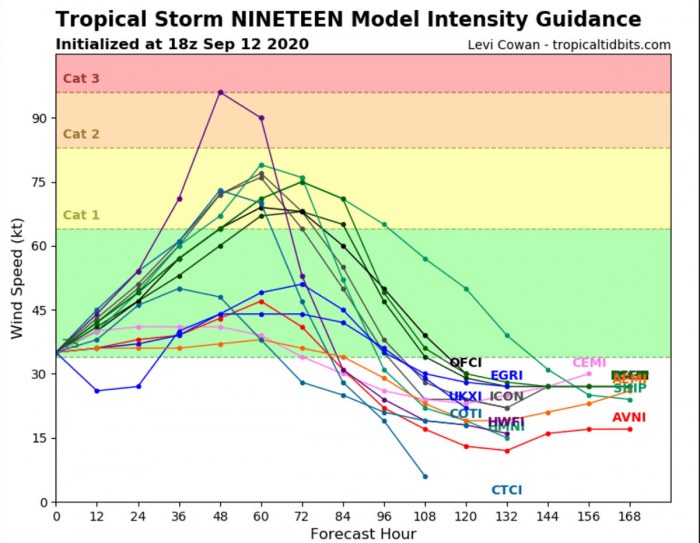 The most likely arrival times of dangerous winds into the Gulf Coast are from Monday morning onwards. 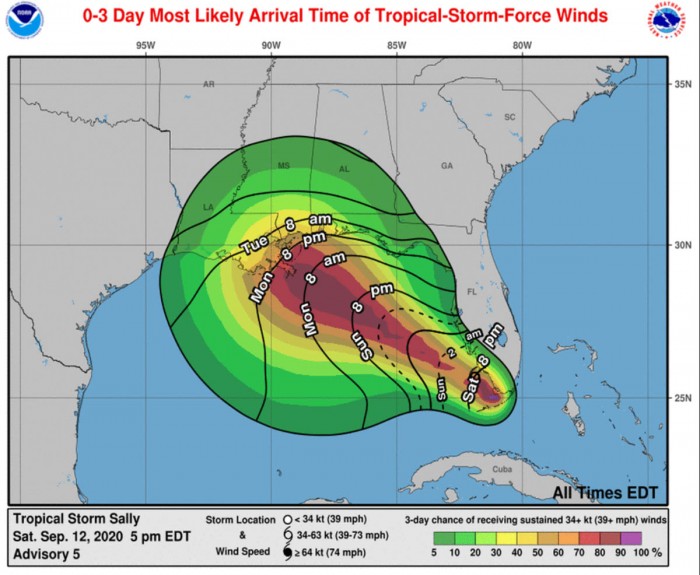 Once Sally intensifies into a hurricane, it is likely to develop extremely dangerous and life-threatening potential for storm surge, destructive winds and flooding along the Gulf Coast. 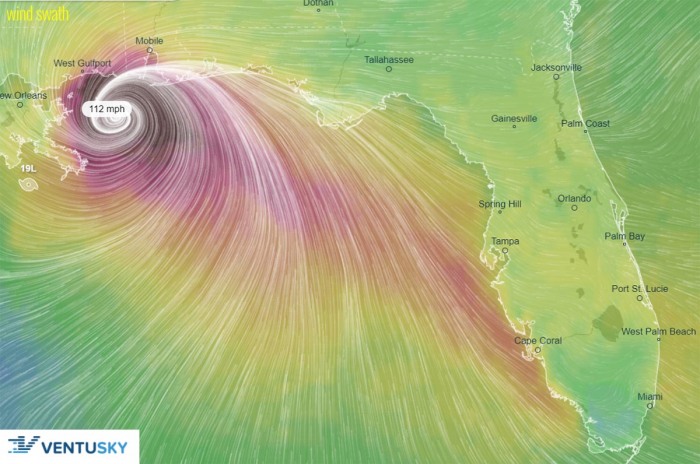 Various models are hinting there will be an enormous amount of rain over the 5 days, more than 10 inches (250 mm) is expected.

Some models, e.g. the European ECMWF are even simulating more than 500 mm (20 inches). 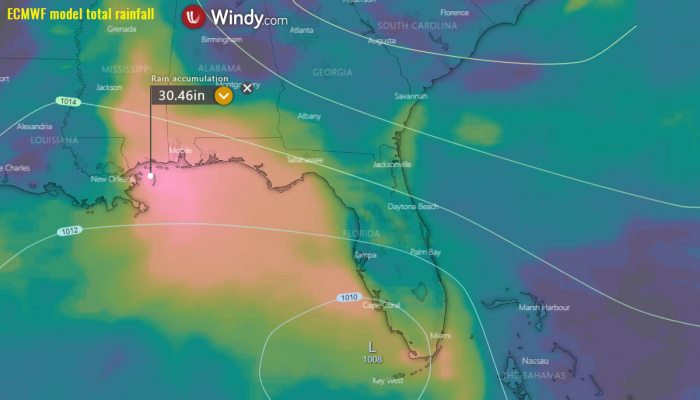 Another concern is the potentially life-threatening storm surge along the Gulf Coast beginning on Monday. A Storm Surge Watch is in effect for areas outside the southeast Louisiana Hurricane and Storm Damage Risk Reduction System from the Mouth of the Mississippi River to the Alabama/Florida border. 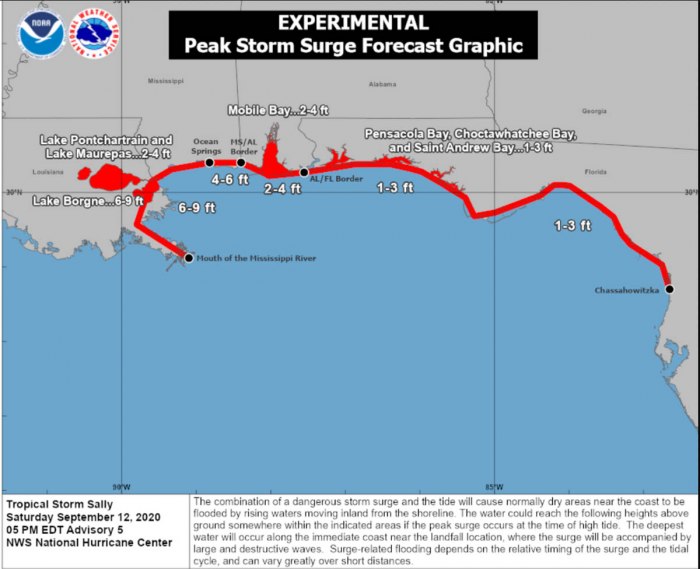 Around 1-3 feet storm surge is possible along the south-southwest Florida, 2-6 feel along southern Alabama and Mississippi and up to 9 feet for southeastern Louisiana.

After Sally, there are then only three names left on the 2020 Atlantic hurricane season list. Teddy, Vicky, and Wilfred are the last names reserved for this year.

When these three names are used, the National Hurricane Center will begin using the Greek alphabet.