The extremely warm Western Caribbean Sea churned yet another potentially dangerous storm – Tropical Storm Zeta has formed on Sunday morning.  Zeta will intensify into a hurricane and first make landfall in Yucatan, then head into the Gulf and potentially for the 11th landfall of a tropical system in the United States mainland next week.

It has been less than three weeks since Hurricane Delta made landfall in Louisiana. But the Caribbean region is now ramping up. Tropical Storm Zeta has formed overnight and will turn towards the Gulf of Mexico and probably also towards the Gulf Coast of the United States.

Hurricane warning has been issued for portions of the Yucatan peninsula.

Tropical Storm Warning has been issued for Western Cuba.

The National Hurricane Center (NHC) warned, that “through Wednesday, heavy rainfall is expected from Tropical Storm Zeta across portions of central and western Cuba, the Cayman Islands, Jamaica, the northeast Yucatan peninsula of Mexico, Southern Florida, and the Keys. This rainfall may lead to flash flooding in urban areas”. 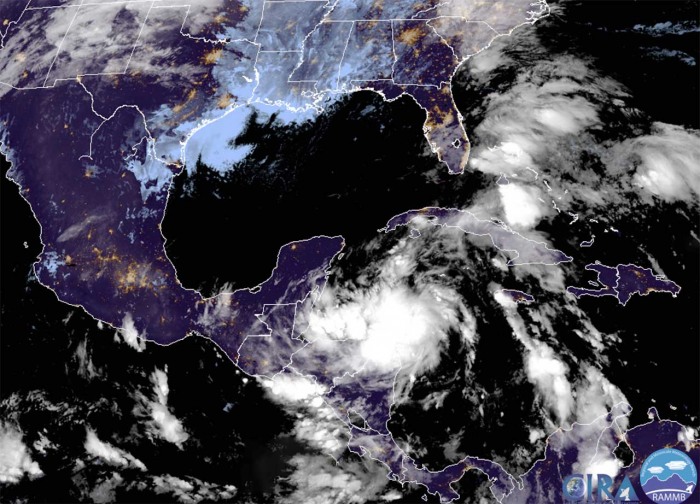 The tropical disturbance/wave had a designated name #95L by NOAA NHC and has been upgraded to a tropical depression on Saturday but soon intensified into a Tropical Storm.

Zeta could become a hurricane while heading towards the northeast over the next few days. There is an increasing potential for a dangerous landfall in the Yucatan peninsula, Mexico on Tuesday. 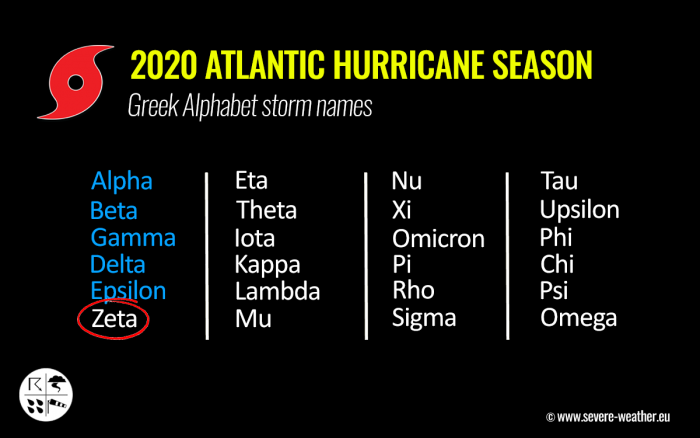 Don’t miss: Hurricane Epsilon will soon begin an extratropical transition and merge with a large upper trough and a low pressure to its north on Sunday. It will become a powerful extratropical storm. Weather models are hinting its central pressure could dip below 940 mbar on Tuesday when it will travel south of Iceland towards western Europe.

We will have an update on this on Monday.

The Atlantic hurricane season has been a record-setting for named storms to date, Oct 25th. There were 27 named storms, which is about 250 % of the long-term average (10.8) for this time period. So far, there were almost double the number of hurricanes (10) and four major hurricanes (Laura, Teddy, Delta, and Epsilon). 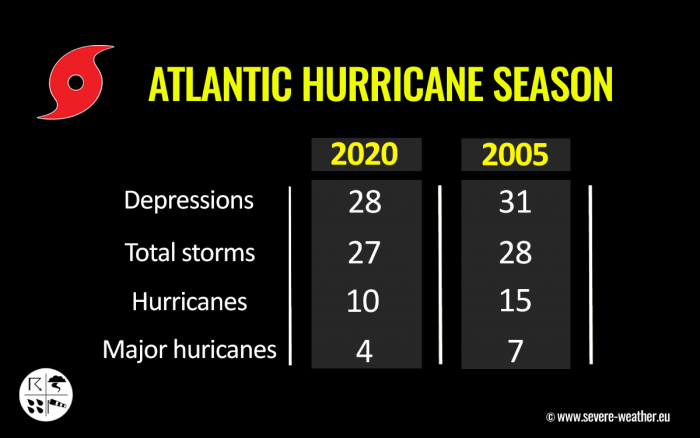 Laura and Delta both made destructive landfalls in Louisiana. And what weather models are now hinting with the Tropical Storm Zeta, it could head for the Gulf Coast of the United States – there are quite some chances it could reach Louisiana. Again.

Recent satellite images indicated that the broad area of low pressure is generating explosive storms with intense convection in the southern semicircle of the cyclone’s large circulation. 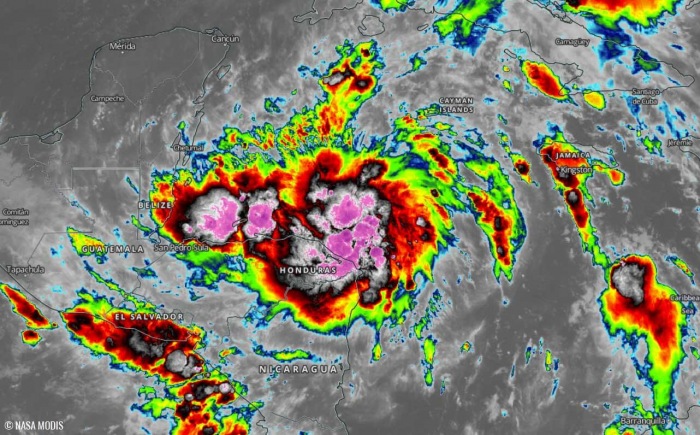 The NOAA hurricane hunters reconnaissance aircraft was also scanning Zeta and has found estimated surface winds of around 35 knots. Therefore, the disturbance was upgraded to a Tropical Storm Zeta.

As can be seen from the animation below, there is a really intense convection ongoing, with cloud tops below -85 °C. Water vapor satellite imagery indicates the cyclonic system has already developed low-level spiral bands with impressive upper-level outflow ventilation.

Graphics for the video animation are provided by Tropical Tidbits.

The environmental conditions remain very conducive for further strengthening in the coming days, so Zeta seems to have an easy job to become the 11th hurricane of the 2020 Atlantic season.

According to the NHC, Zeta is expected to bring Hurricane conditions and storm surge in portions of the northern Yucatan Peninsula of Mexico Monday night and early Tuesday. Tropical storm conditions could occur over extreme western Cuba on Monday.

The National Hurricane Center (NHC) is forecasting that Zeta will move generally northwest and have landfall in Yucatan on Tuesday morning, likely as a Category 1 hurricane.

As the system is still developing, there still some uncertainties regarding the potential track after Zeta passes near or over the peninsula. As seen by the various model forecast tracks below, Zeta is quite likely on the way for landfall in Yucatan first. 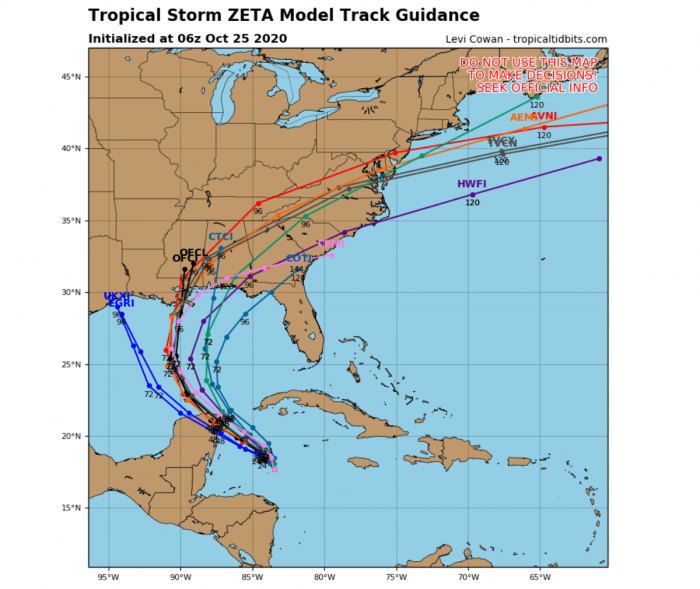 But then the potential impact along the Gulf Coast is yet to be defined. The system should continue into the Gulf of Mexico while maintaining its hurricane strength until it has support from the warm Gulf waters.

However, weakening is likely prior to landfall in the United States due to cooler waters present along the Gulf Coast. 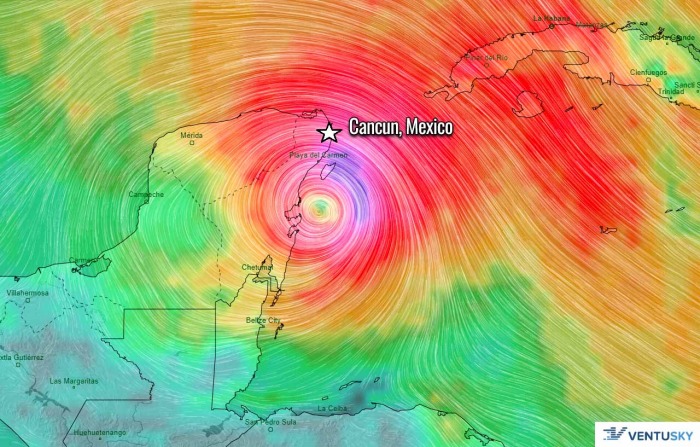 As can be seen from the chart above, the ICON model it hinting the landfall of Tropical Storm Zeta in the northeast part of the Yucatan peninsula, south of Cancun.

Nevertheless, conditions are forecast to remain favorable for further development through Monday as wind shear will remain relatively low with the sea-surface temperatures of near 29 °C (84° F), and plenty of moisture in the mid-levels.

POTENTIAL INCREASING FOR THE GULF COAST

Zeta is forecast to approach the northern Gulf Coast on Tuesday night into Wednesday as it will be moving quite fast after it is past the Yucatan peninsula. It could bring storm surge, heavy rainfall, and wind impacts to areas from Louisiana to the Florida Panhandle.

Residents in these areas should monitor the progress of Zeta in the following days. 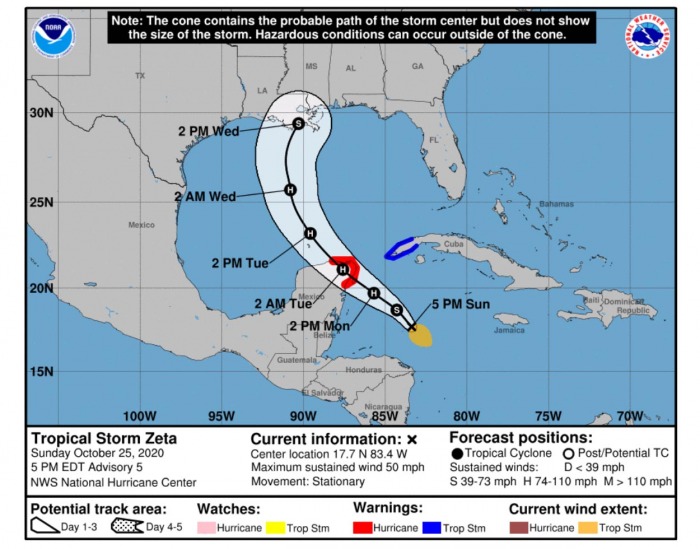 Flash floods are possible along the path of Zeta and especially enhancing landslides potential across the higher terrain of Cuba while the core passes to the west of the country.

By October 25th, the 2020 hurricane season now still has about 35 days left until we close the books at the end of the season. 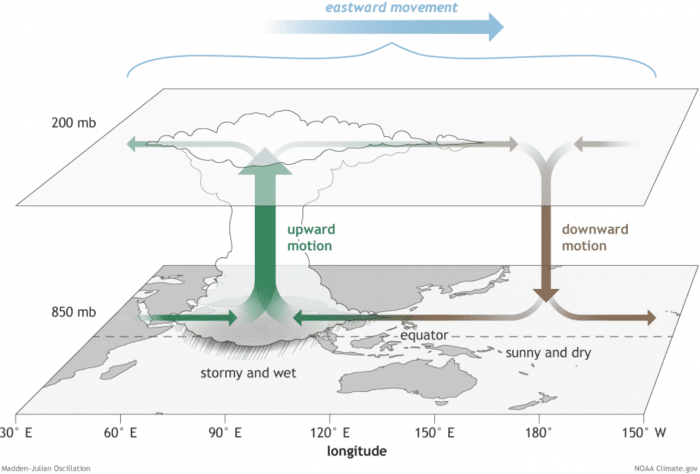 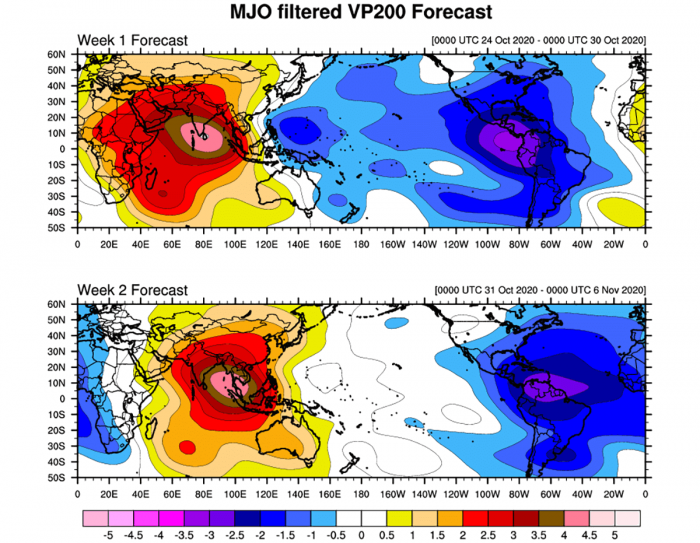 Based on the current statistics, the Atlantic hurricane season 2020 is only one system away from the record of 28 named storms in 2005. For example, the 2005 season had eight (8) additional storms forming in October itself and a few more later in November. Some storms formed even past the official end of the season in December.