The long-lived tropical system, now hurricane Leslie, will finally come its grand finale this weekend. Latest model guidance suggest it will probably make landfall in southwestern parts of Iberian peninsula. Based on both global and high-resolution models the landfall in southern Portugal is becoming increasingly likely sometime on Sunday morning. Leslie will first cross very near to Madeira island tomorrow before it continues towards Iberia. Severe winds and torrential rainfall will be the primary threats along its path.

This afternoon’s satellite imagery still reveal an impressive structure of Leslie with organized convection around the centre, while recent microwave overpasses indicate at least a partial eyewall is present under the overcast. The estimated intensity of max sustained winds is 90 mph, a high-end Category 1 hurricane. Central pressure is around 969 mbar. 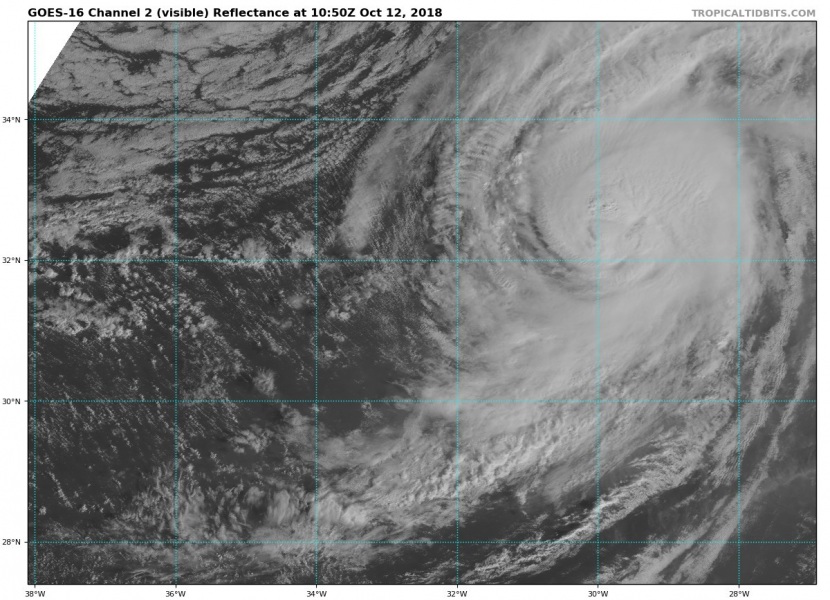 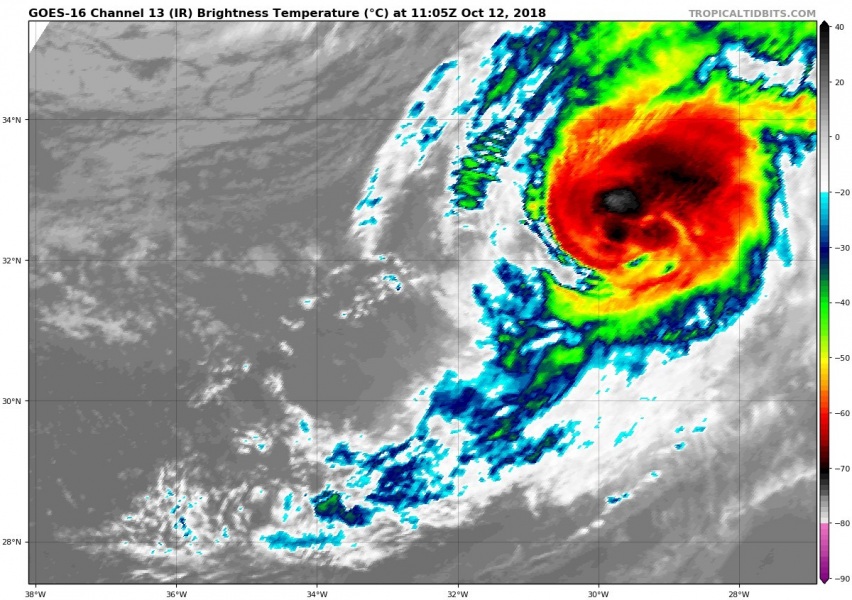 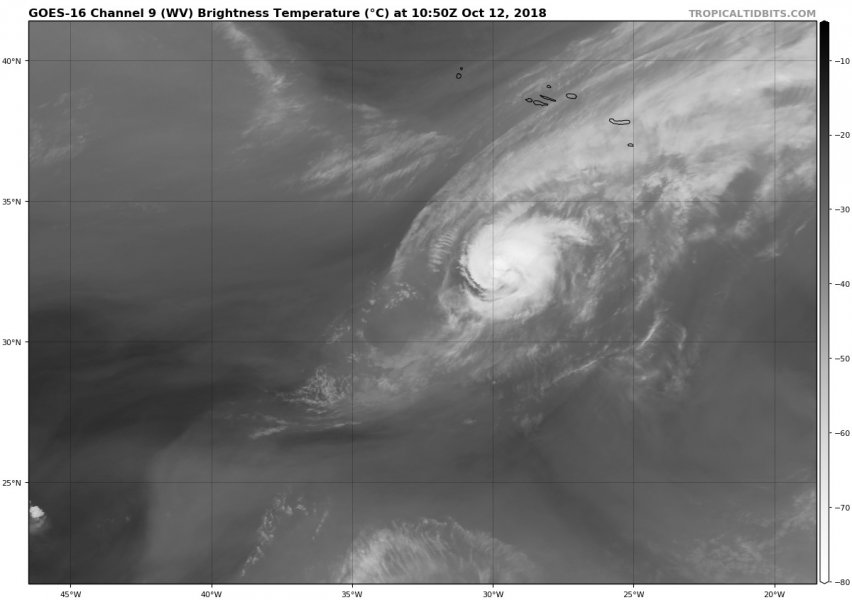 Category 1 hurricane #Leslie on its way towards Madeira island. Leslie will likely have a landfall in SW Iberian peninsula on Sunday, Oct 14th. Animation via @TropicalTidbits pic.twitter.com/Sd3ENodKce

Here are a couple of models today, hinting at a higher confidence in landfall in south-western Iberian peninsula, eventually in south Portugal on Sunday. What’s interesting is Leslie could maintain its warm-core structure all the way up to landfall – that means we could actually see a hurricane / high-end tropical storm force make landfall in the Iberian peninsula. 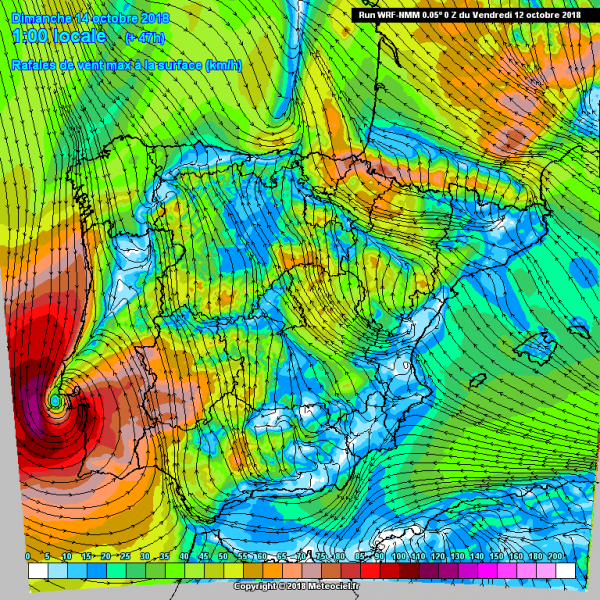 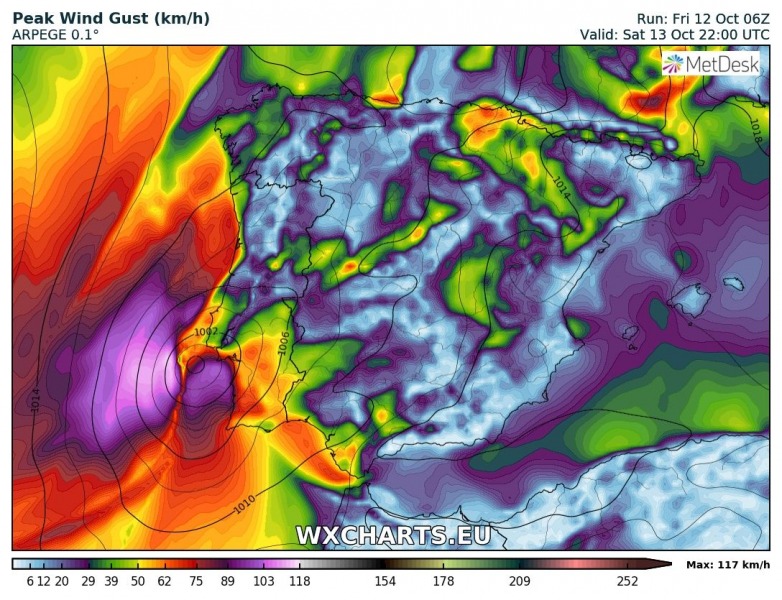 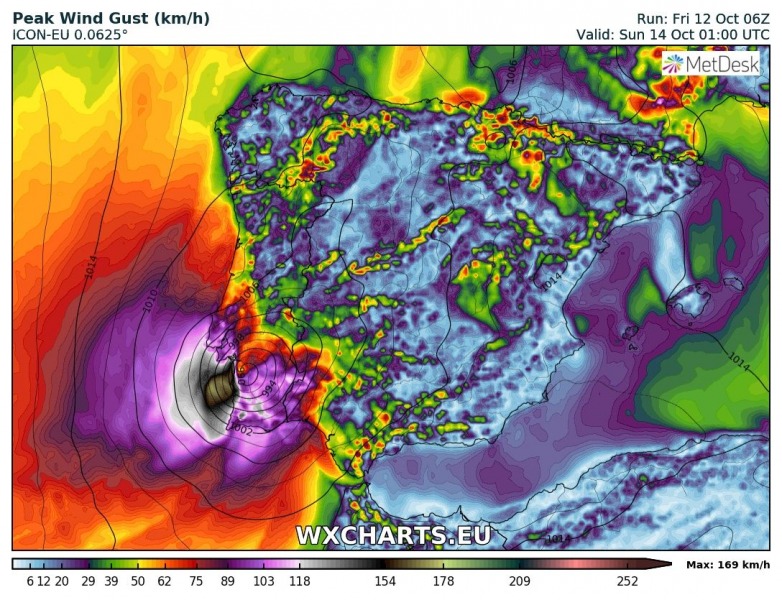 Also the European ECMWF model guidance suggest Leslie’s track is now leaning more towards Iberian peninsula again, while past few days were trending it more towards turning back SW after it passes by Madeira island. 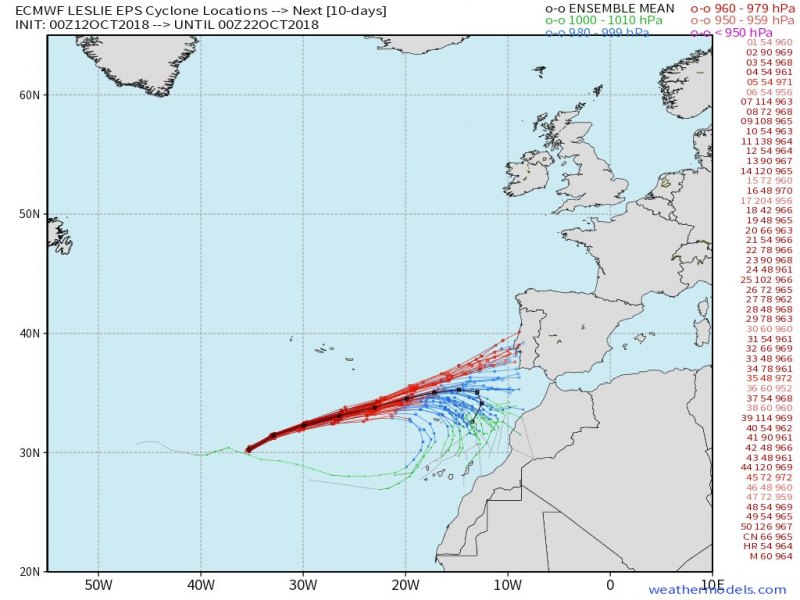 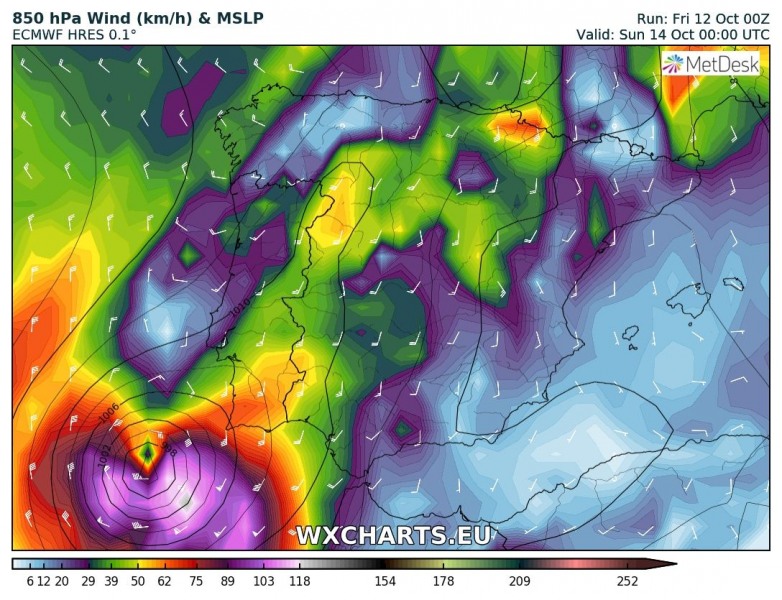 Peak wind gusts swath per GFS, ARPEGE, ICON-EU and NMM models, all are in fairly good agreement of landfall as an intense storm in south Portugal. Max sustained winds would be 90-120 km/h which is borderline Category 1 hurricane strength. 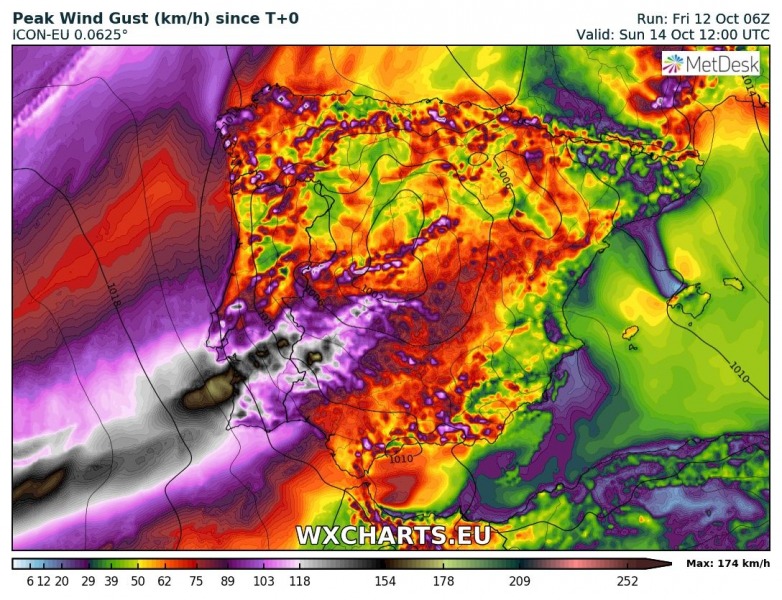 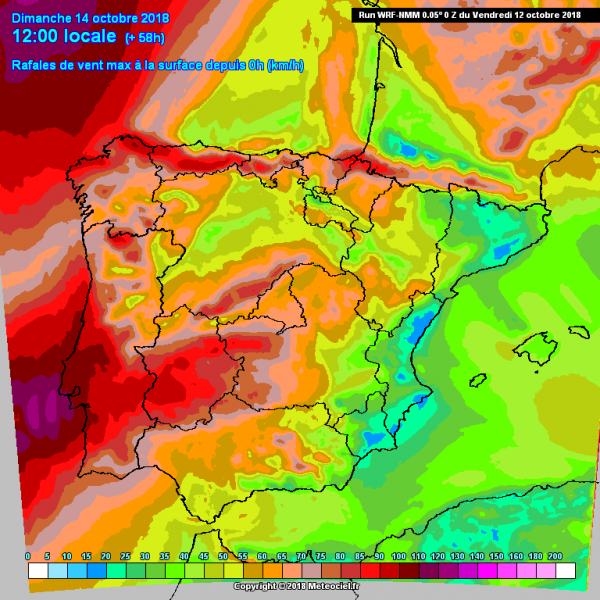 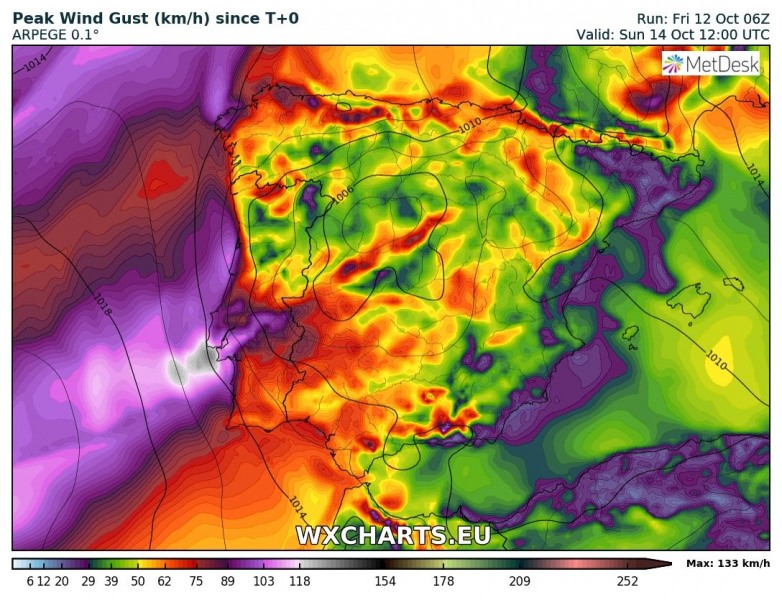 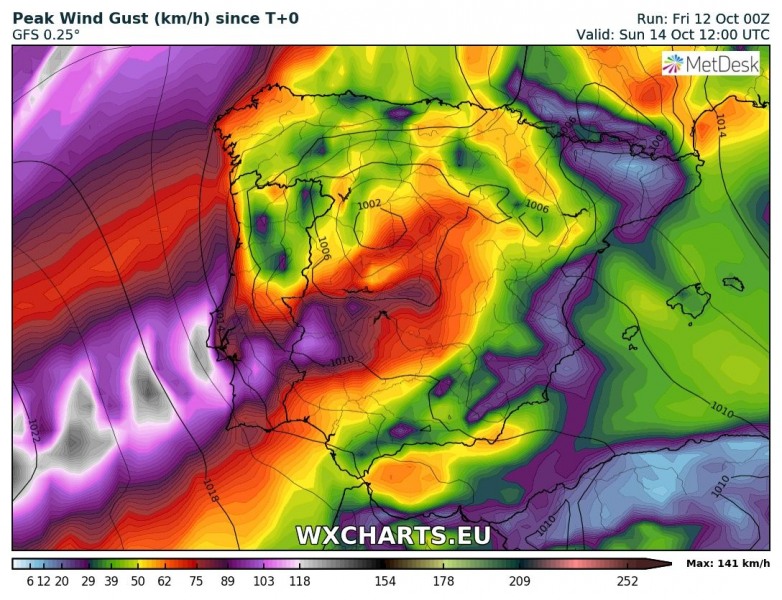 The additional threat associated with Leslie will also be severe storms and likely torrential rainfall with excessive rainfall locally. 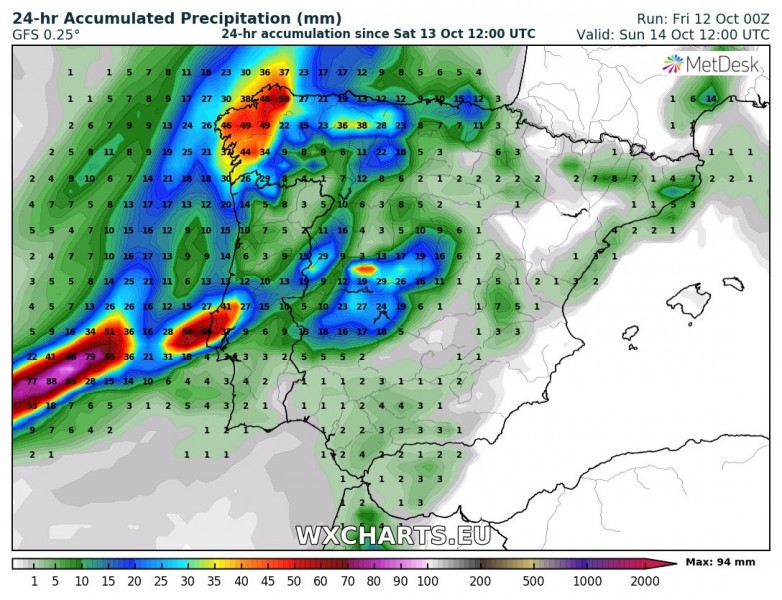 An interesting look at cyclone tracks ensemble model spread across the Atlantic this weekend: we can see hurricane Leslie trending towards landfall in south Portugal. In addition, ex-hurricane Michael rapidly crosses the Atlantic and nears the Bay of Biscay and NW Iberia a day after Leslie’s landfall. 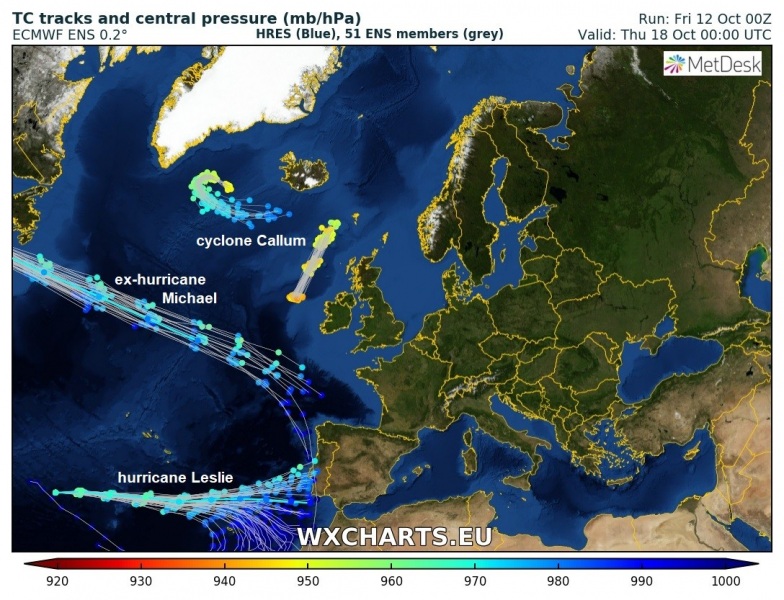 We are closely monitoring Leslie’s future track and will keep you updated! – stay tuned!