After a brief period of stagnation due to dry air intrusion last night, the latest satellite imagery suggests the Tropical Cyclone #Damien is now beginning rapidly intensifying! A small pinhole eye is appearing on the IR satellite scans with a forming potentially strong eyewall. Conditions are deteriorating now as the outer rain bands start to spread over the Karratha area. Very favorable sea temperatures near the coast suggest it is highly unlikely #Damien has any chance to stop intensifying or weaken before making landfall – this is the *worst* case scenario! Destructive winds in excess of 200 km/h, major storm surge and severe flooding are expected on the coast.

Dampier radar site is already picking up the cyclone’s core, the eyewall is also quite well-visible with additional outer rain bands south of it, already affecting the coastal areas. 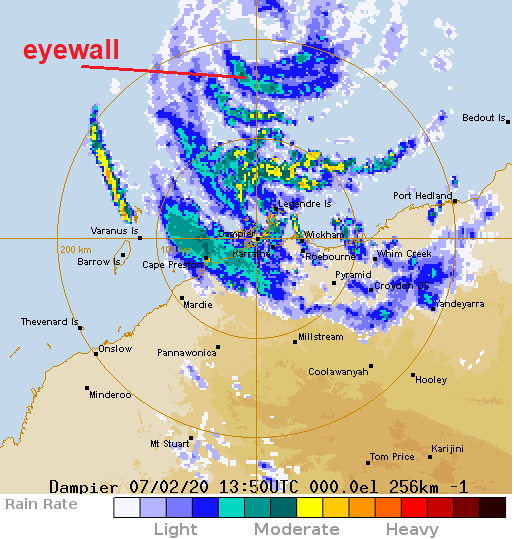 Latest satellite imagery reveals a forming small, pinhole eye surrounded by a strengthening eyewall. While impressive upper-level outflow ventilation is present. This is a sign Damien is rapidly intensifying now! 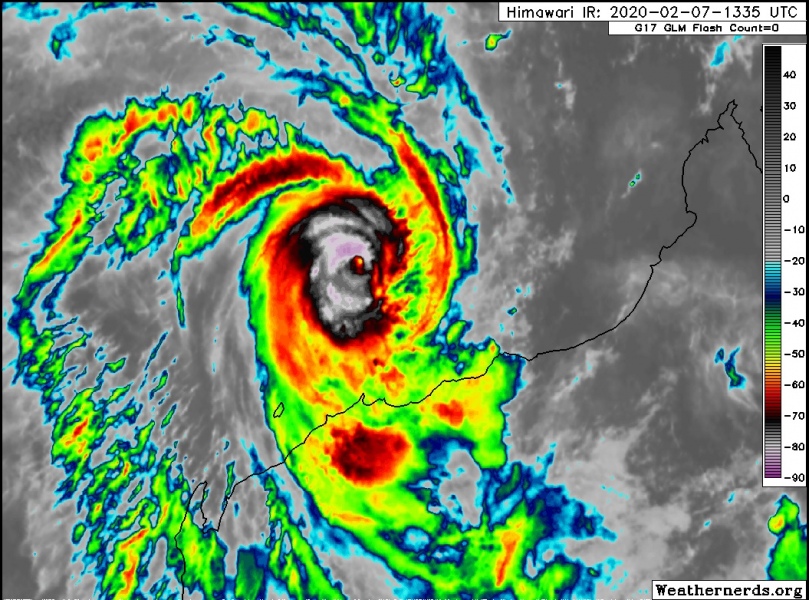 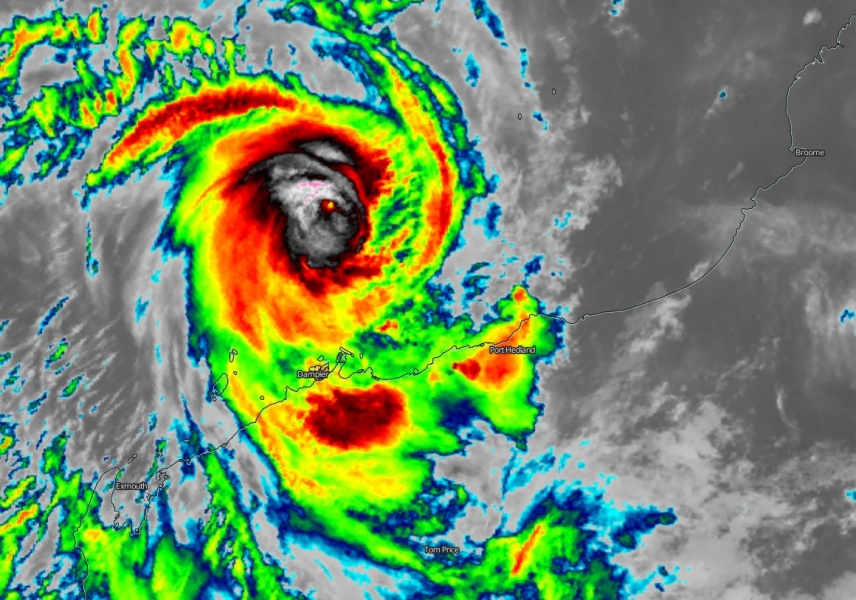 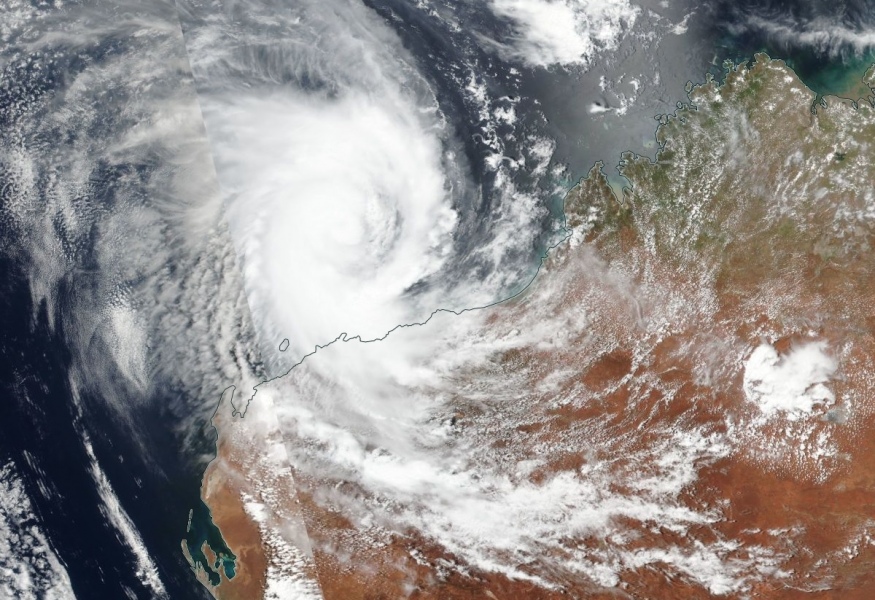 After a brief period of stagnation due to dry air intrusion last night, #Damien seems to be strengthening again as curling CBs within the RMW of the small pinhole eye axisymmetrize the inner-core windfield and produce a potent eyewall. pic.twitter.com/IAWOFksEoC

As we mentioned yesterday, the very favorable hot sea waters of 30-32 °C along the coast of Western Australia should help to fuel the storms with high moisture. The Ocean Heat Content (OHC) map indicates Damien is just coming into these favorable conditions, so further rapid strengthening is expected! And it seems the ocean conditions are very similar all the way to the coast, so, for this reason, it is highly unlikely the system would stop intensifying or weaken before making landfall.

Hazards:
Gales are forecast to develop along the Pilbara coast between Pardoo and Mardie including Port Hedland, Karratha and Dampier from as early as late Friday evening. DESTRUCTIVE winds with wind gusts to 150 kilometers per hour are likely to develop during Saturday morning as the cyclone approaches the coast.
VERY DESTRUCTIVE winds with gusts to 230 kilometers per hour are expected near the cyclone center as it crosses the coast during Saturday.
If the cyclone tracks further to the west then gales may develop during Saturday between Mardie and Onslow.
Residents between Mardie and Port Hedland, including Dampier, Karratha are warned of the potential of a VERY DANGEROUS STORM TIDE as the cyclone center crosses the coast. Tides are likely to rise significantly above the normal high tide mark with DAMAGING WAVES and VERY DANGEROUS FLOODING.
Heavy rain is likely to cause flooding in the Pilbara and Gascoyne as the cyclone moves inland over the weekend. Flood Watches and Warnings are current, please refer to http://www.bom.gov.au/wa/warnings/ for further details.

The Advanced Dvorak Technique (ADT) analysis estimates suggest there are 50-knot winds around the center now, expanded 20-25 miles across SW, SE and NE quadrants of the cyclone. 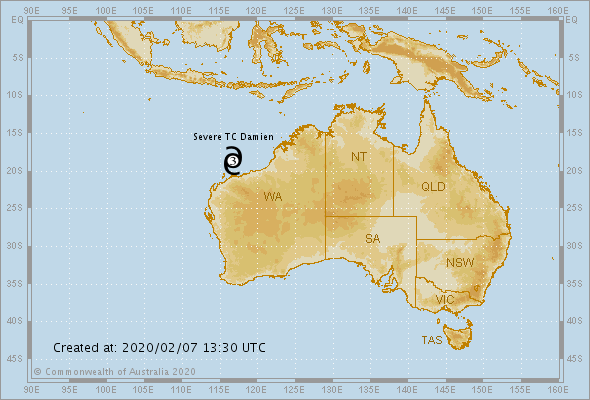 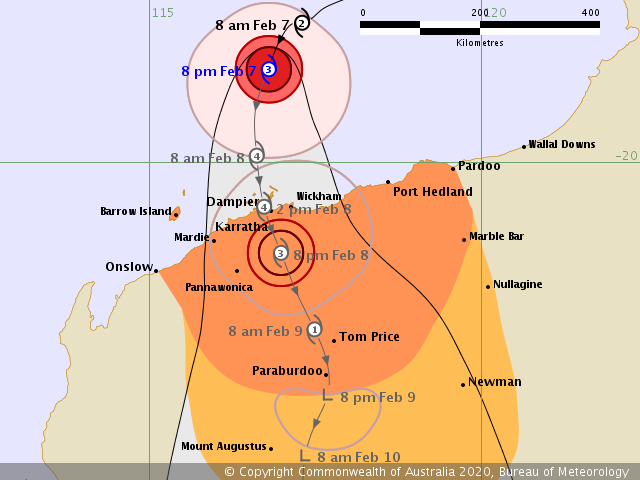 Please refer to the previous discussions for details:

Read also about the ongoing explosive cyclones over the North Atlantic: