As we have discussed yesterday, a potentially dangerous tropical system forms along the coast of Western Australia. Then, the former Invest #92S has been upgraded to a Category 1 Tropical Cyclone #Damien. The system is indicating explosive convection around the virtual center of the low, packing maximum sustained winds of 50 knots and 992 mbar central pressure. Damien will continue steadily strengthening while moving south-southwest towards a potential destructive landfall on Saturday afternoon – soon after the system gets into a rapid intensification. The most probable scenarios are bringing it ashore near the city of Karratha.

NEW UPDATE: Tropical Cyclone #DAMIEN becomes a Category 3 cyclone – will intensify into a Category 4 prior to landfall in Western Australia – expected in less than 24 hours

#Damien is posing a dangerous threat to Western Australia this weekend as all models are leaning towards the potential it could rapidly intensify into a Severe Tropical Cyclone. Most of the models are hinting ar least a strong Category 3 (Severe Tropical Cyclone) strength, some of them even a Category 4 strength. Based on the Australian tropical cyclone classification, that brings the maximum sustained winds above 85 knots (= 100 mph = 155 km/h)! Cities like Port Hedland, Karratha, and Dampier are under the gun of this dangerous tropical system.

Satellite imagery reveal an impressive upper-level outflow, meaning the system has a very good potential for significant strengthening in the next 48 hours. Explosive storms are ongoing, gradually organizing a cyclonic structure of the system. 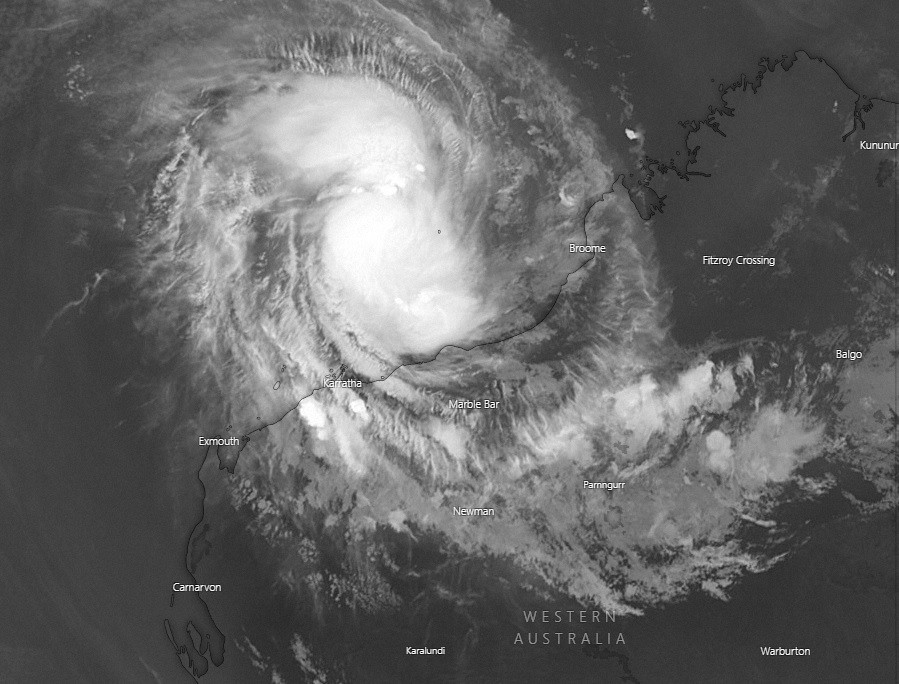 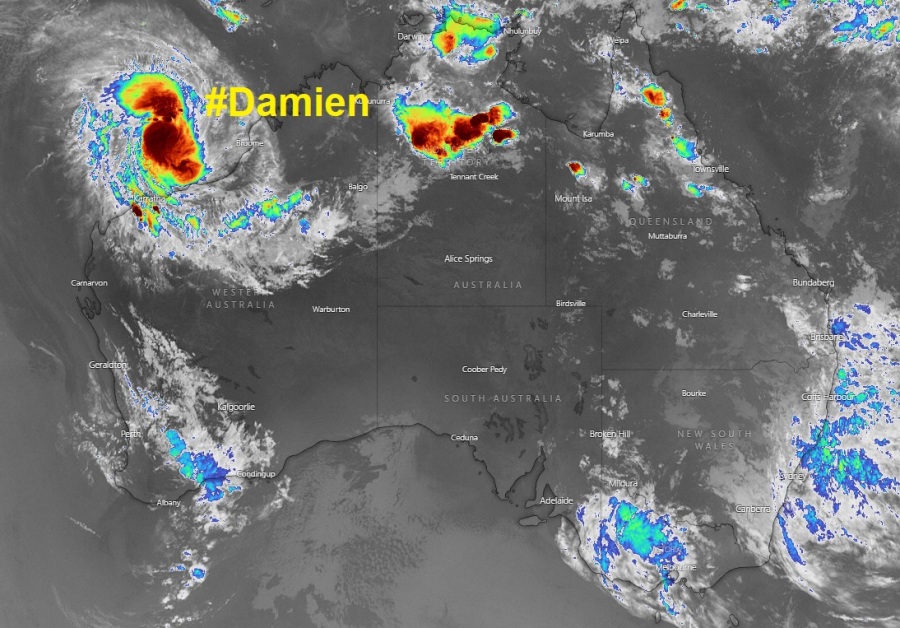 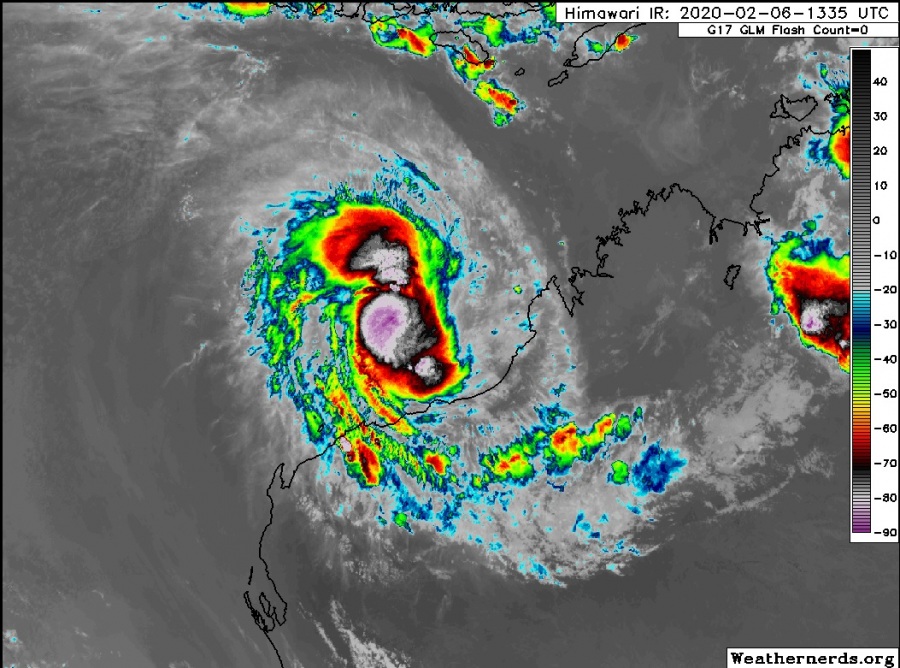 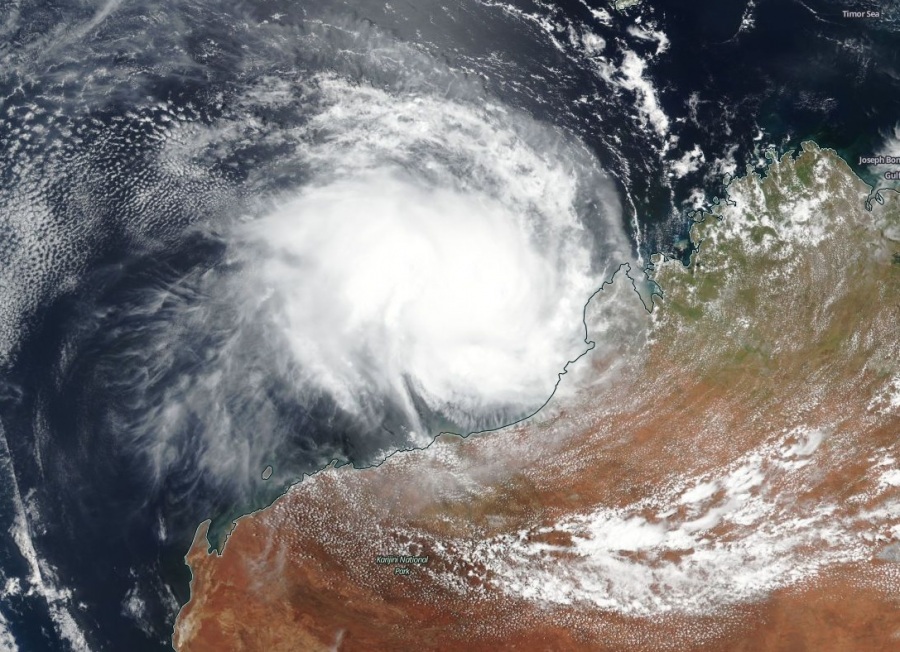 #Damien is posing a threat to #WesternAustralia. FOrecast point out that it could rapidly intensify into a Severe Tropical Cyclone. Towns like Port Hedland, Karratha, and Dampier are under the gun of this dangerous storm. pic.twitter.com/gIQrKFEG5x

Tropical Cyclone #Damien off the northwest coast of #Australia is forecast to strengthen further before landfall. Note also the extreme heat of the terrain via enhanced IR. https://t.co/qGdHTcDE3G pic.twitter.com/N7bfm5u2OP

The latest forecast track hints #Damien could make a Category 4 landfall on Saturday. Tropical Cyclone weather advisories and warnings have already been issued for coastal areas. The system should continue to intensify as it tracks southwest tonight, gradually growing in size and gaining strength – Damien will likely reach a Category 2 strength by the morning hours. Damien is then expected to turn south towards the Pilbara coast on Friday and make the landfall on Saturday during the day. A severe tropical cyclone impact is forecast for the Pilbara coast during Saturday. The main threats with this tropical cyclone will be destructive winds with gusts potentially reaching 180-230 km/h near the cyclone’s center while it nears the coast on Saturday. It strongly depends where the exact track will be, therefore different areas will be affected by extremely torrential rains, destructive winds and storm surge along the coastal areas. JTWC forecast ints 100 knots sustained winds six (6) hours before landfall. 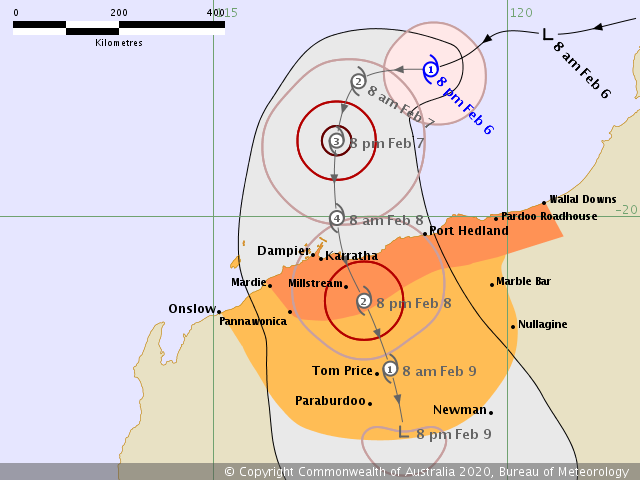 Here is the official forecast discussion by the Bureau of Meteorology (BoM):

Hazards:
Gales are forecast to develop along the Pilbara coast between Pardoo Roadhouse and Mardie including Port Hedland, Karratha, and Dampier from Friday afternoon or evening. DESTRUCTIVE winds with wind gusts to 150 kilometers per hour may develop overnight Friday night as the cyclone approaches the coast. VERY DESTRUCTIVE winds with gusts to 230 kilometers per hour are expected near the cyclone center on Saturday. If the cyclone tracks further to the west then gales may develop Saturday morning between Mardie and Onslow. If the cyclone tracks further to the east then gales may develop Saturday morning between Pardoo Roadhouse and Wallal Downs.
Residents between Dampier and Pardoo Roadhouse, including Dampier, Karratha and Port Hedland, are warned of the potential of a VERY DANGEROUS STORM TIDE as the cyclone centre crosses the coast. Tides are likely to rise significantly above the normal high tide mark with DAMAGING WAVES and VERY DANGEROUS FLOODING.

Here’s an incredible HWRF model guidance for the final 12 hours before rainfall – if this model verifies, Damien will be a violent cyclone! Attached are the composite reflectivity maps and 850 winds: 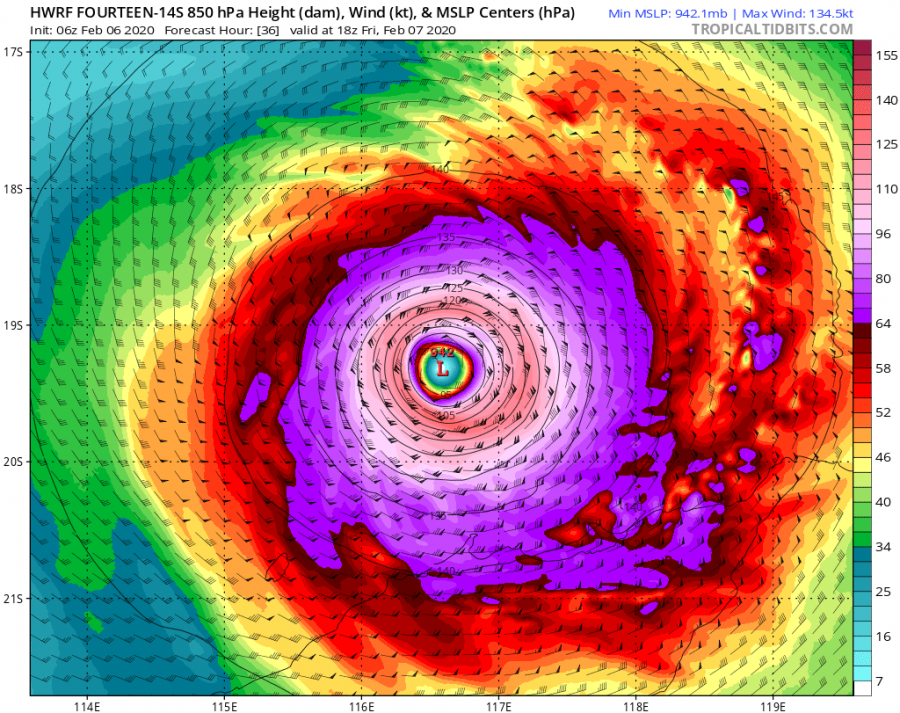 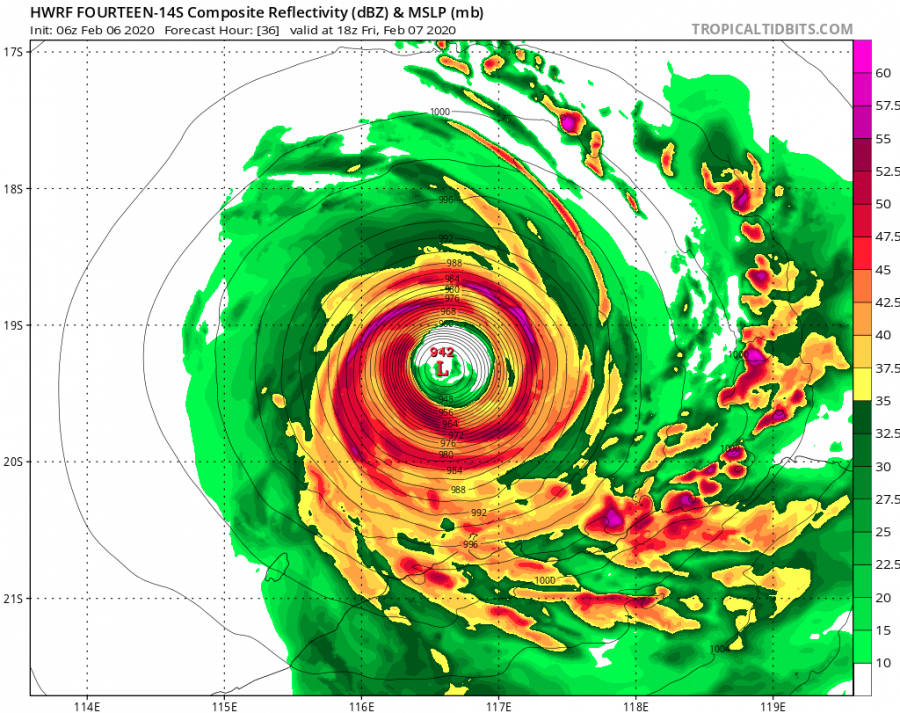 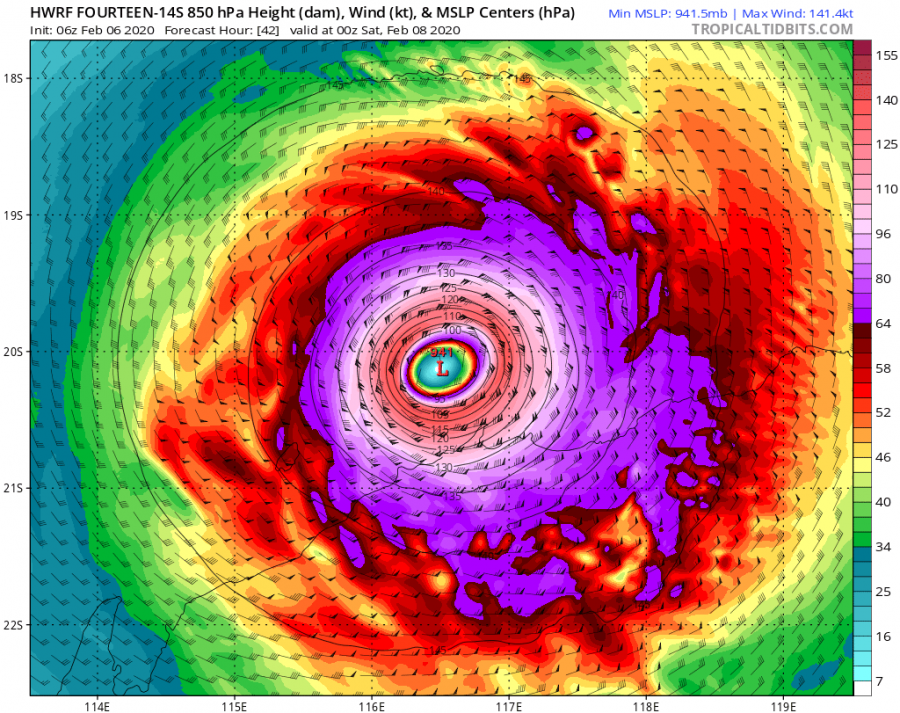 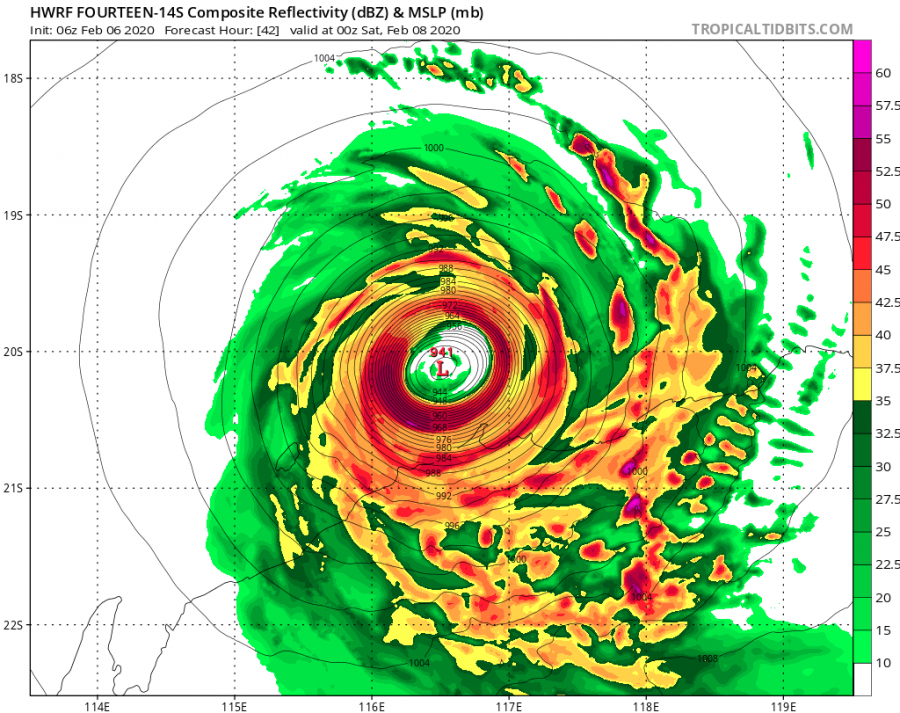 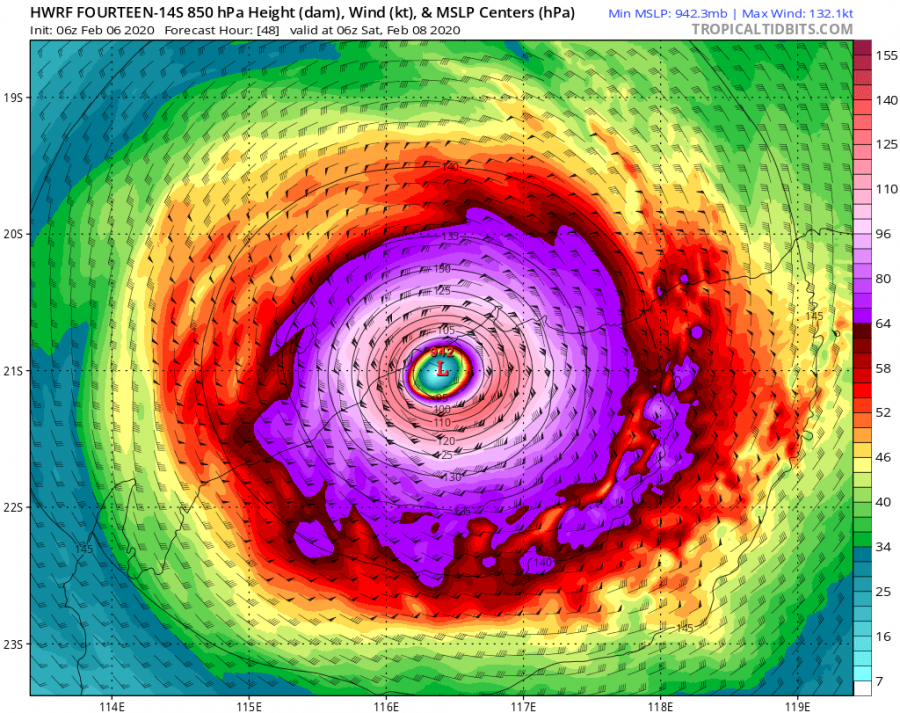 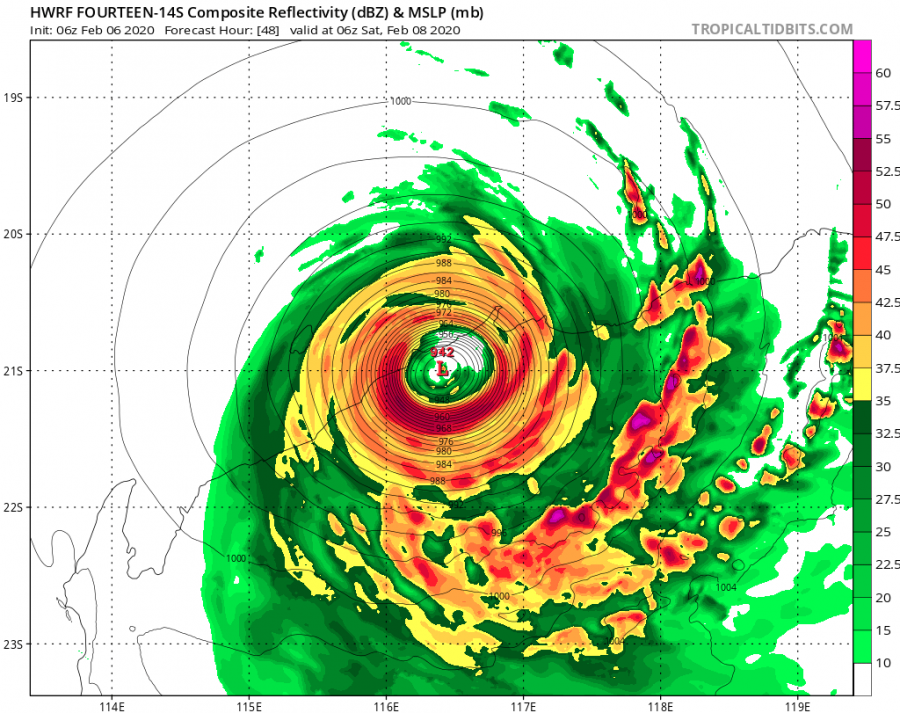 As forecast by the various models, it appears likely Damien will become a severe tropical cyclone, likely reaching at least a Category 3 strength, if not Category 4 in the final hours prior to landfall. Looking over the IR satellite simualtions, Damien should also develop a large eye, surrounded by an intense eyewall! 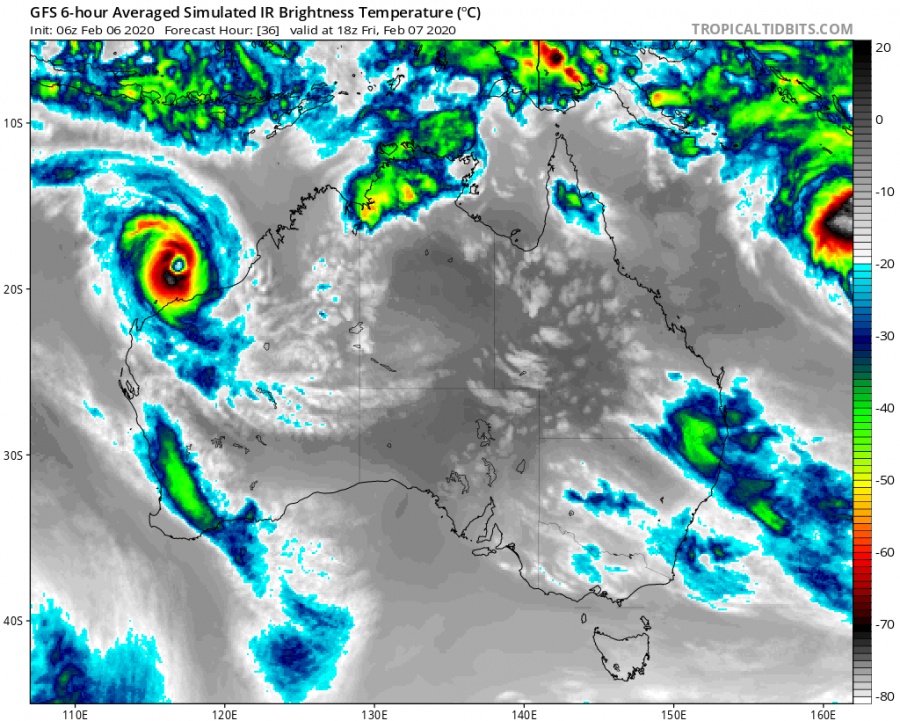 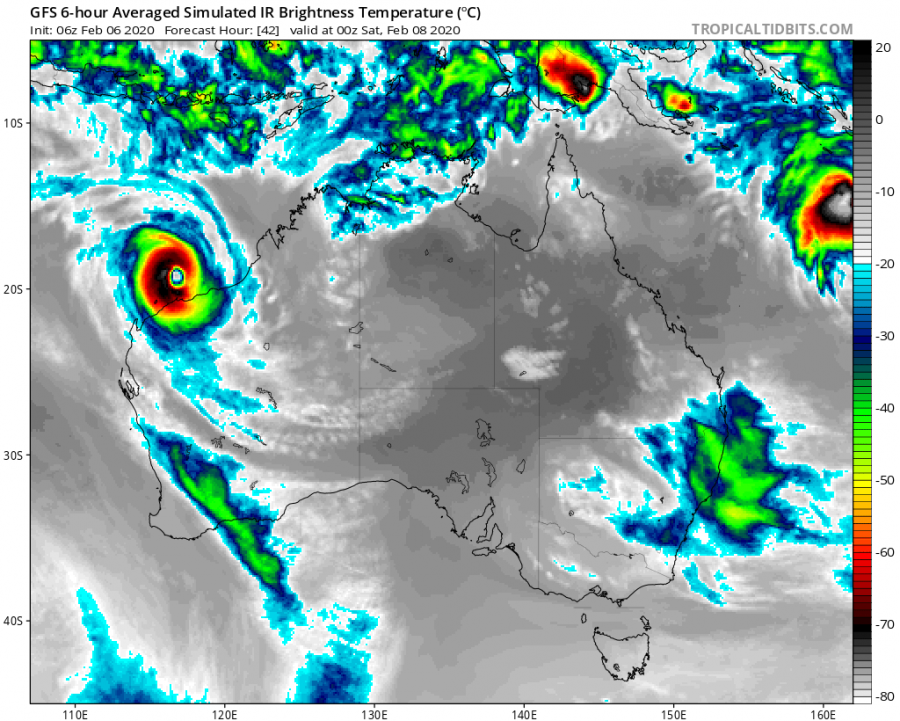 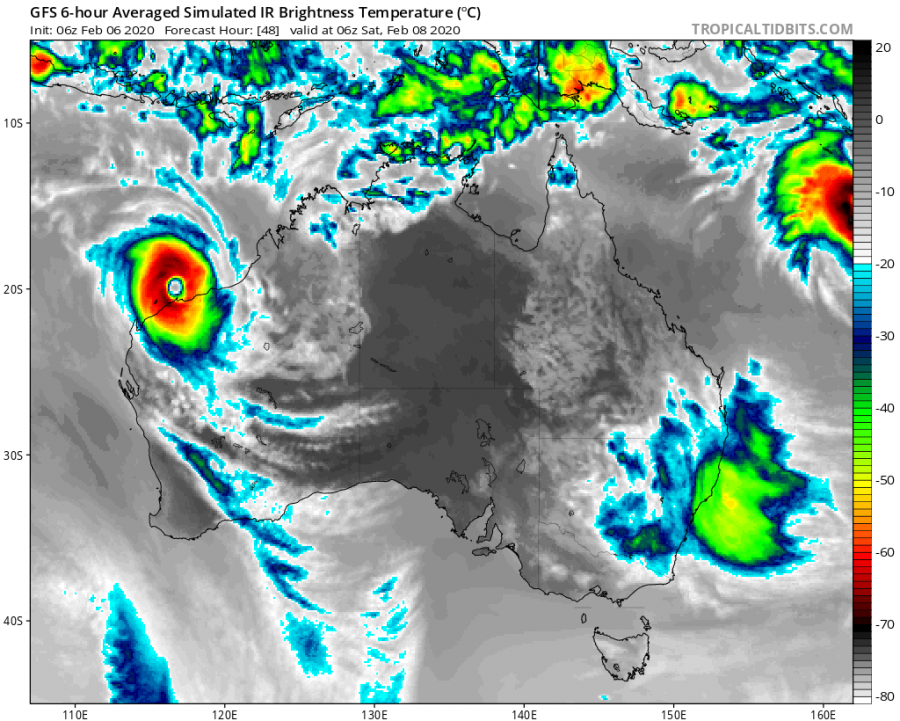 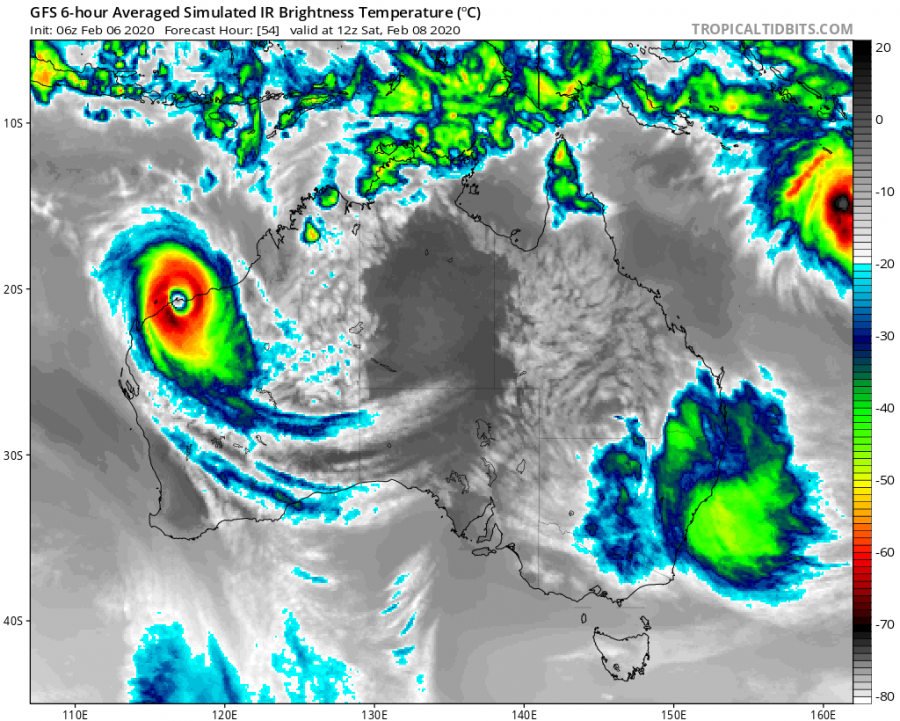 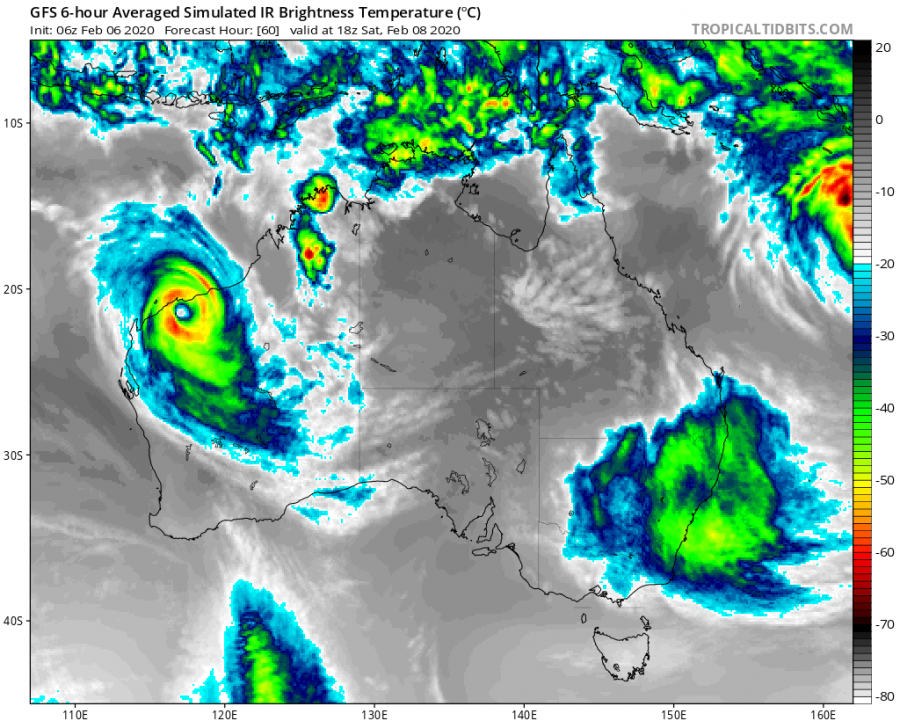 Additionally, here are some high-resolution close-up maps for the impacted area near the likely landfall – an intense wind gusts swath peaking at 122 kt (= 140 mph / 230 km/h) right on the coast. This would be destructive! A HUGE amount of rainfall is also likely, locally more than 400 mm of rain in 24-36 hours is expected, leading to dangerous flooding threat. And indeed a damaging storm surge on the coast! 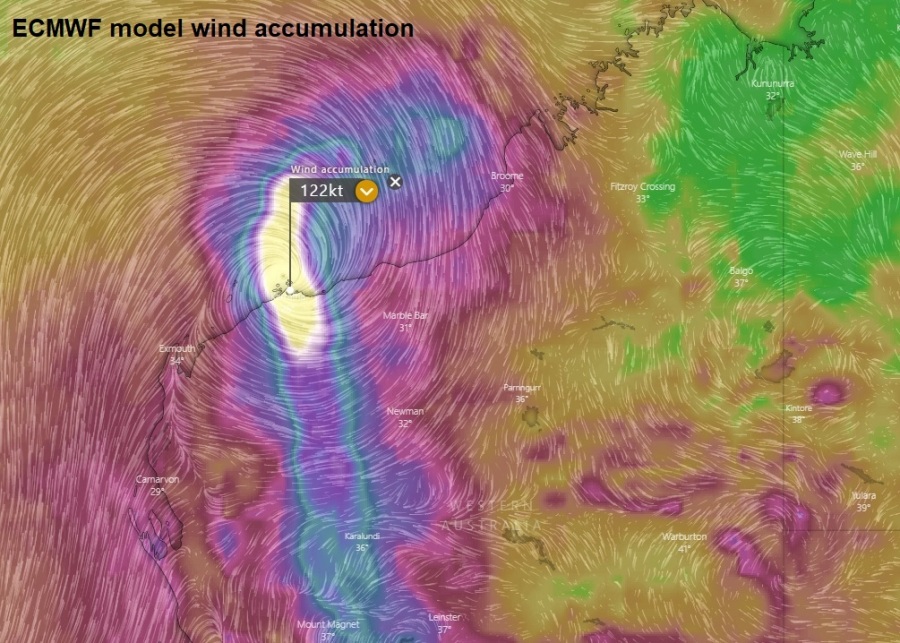 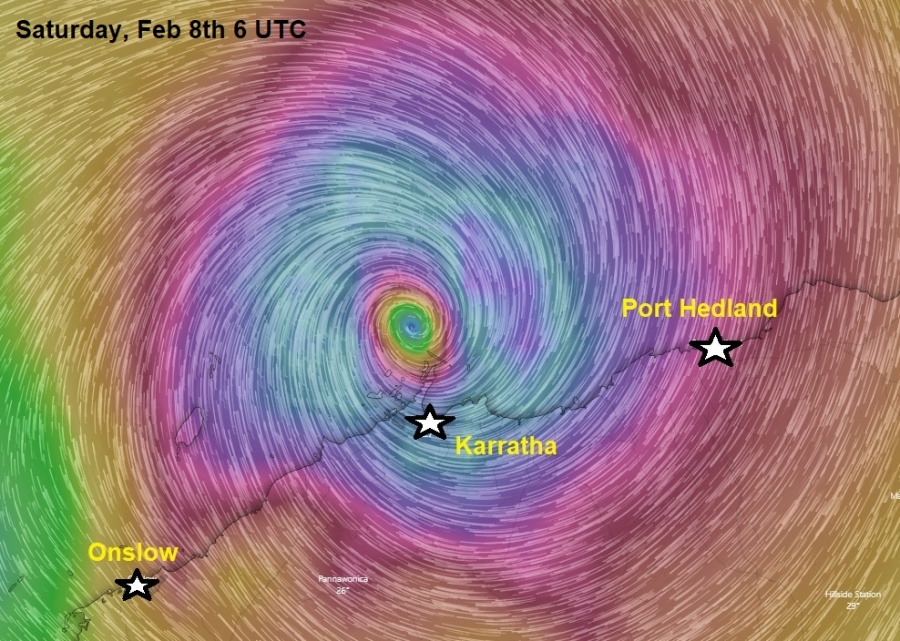 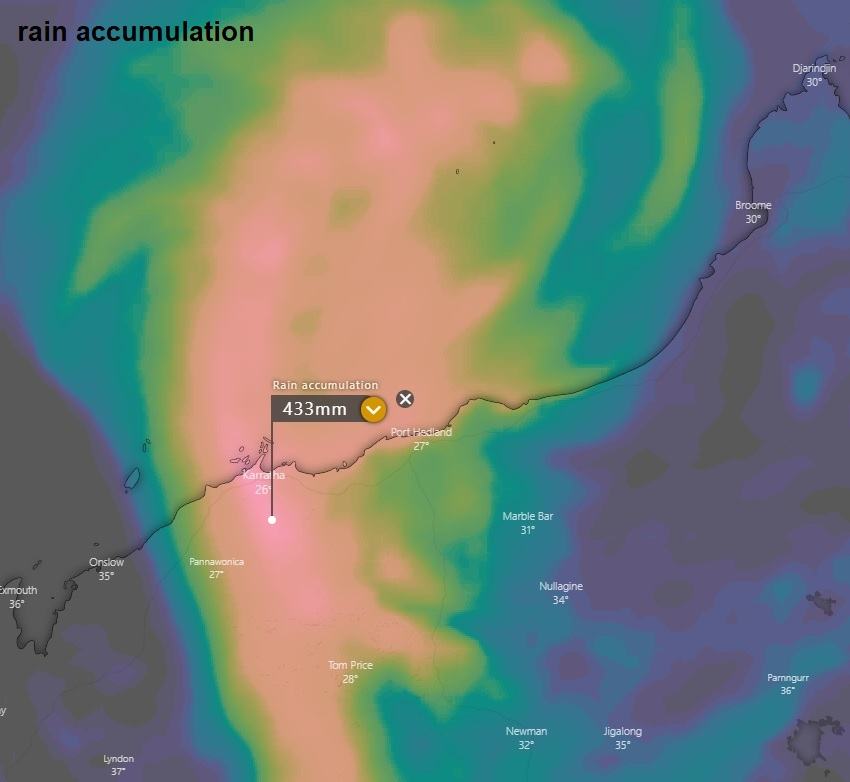 Soon after Damien makes landfall, it will begin a significant weakening trend. It will lose its strength and intense wind field over the land further inland. However, the system will be violent over the coastal areas! 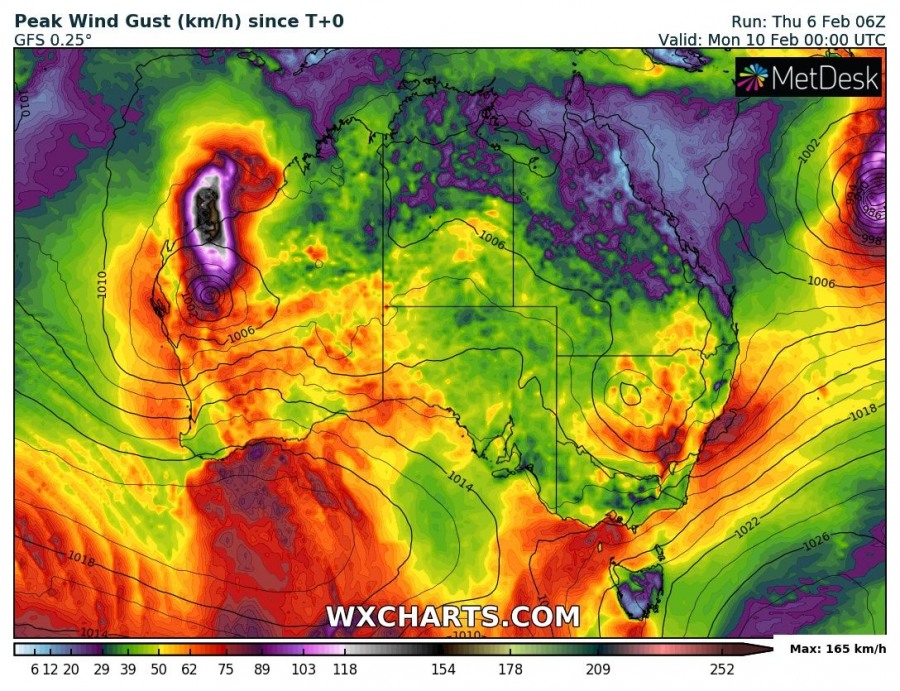 And the other two tropical systems currently ongoing:

Tropical Cyclone #Francisco (#13S) in the South Indian Ocean, heading west-southwest towards Madagascar while weakening – should dissipate before hitting any land areas