NEW UPDATE: The intense #stormCiara (windstorm) across the UK and Ireland through Sunday & Monday – severe winds and major waves are expected!

The ‘bomb cyclone’ developing over the northeast US and eastern Canada today (Friday) will ejects into the North Atlantic on early Saturday. Its activity will then quite rapidly continue east towards Europe. While its former upper wave occludes, the surface low re-intensifies again with the additional cold advection from the extremely deep cyclone further north near Iceland/Greenland. A powerful broad wind field under the jet-streak maintains all the way across the ocean and smash into the UK and Ireland on Sunday! 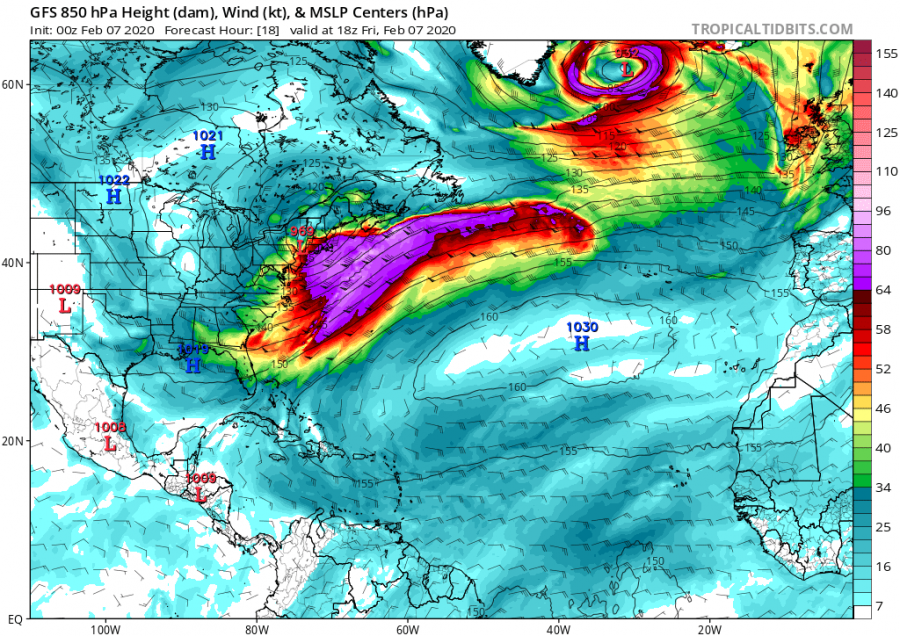 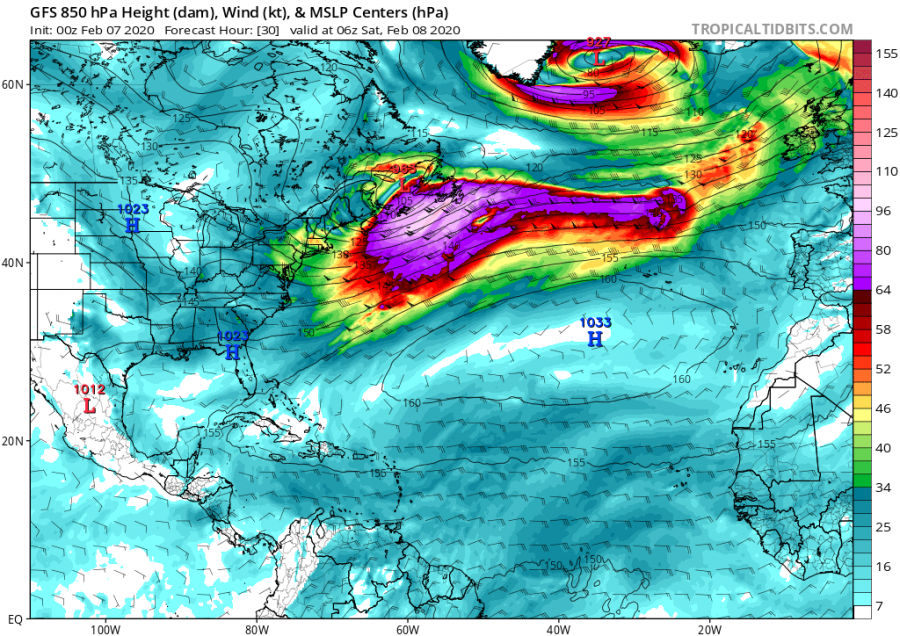 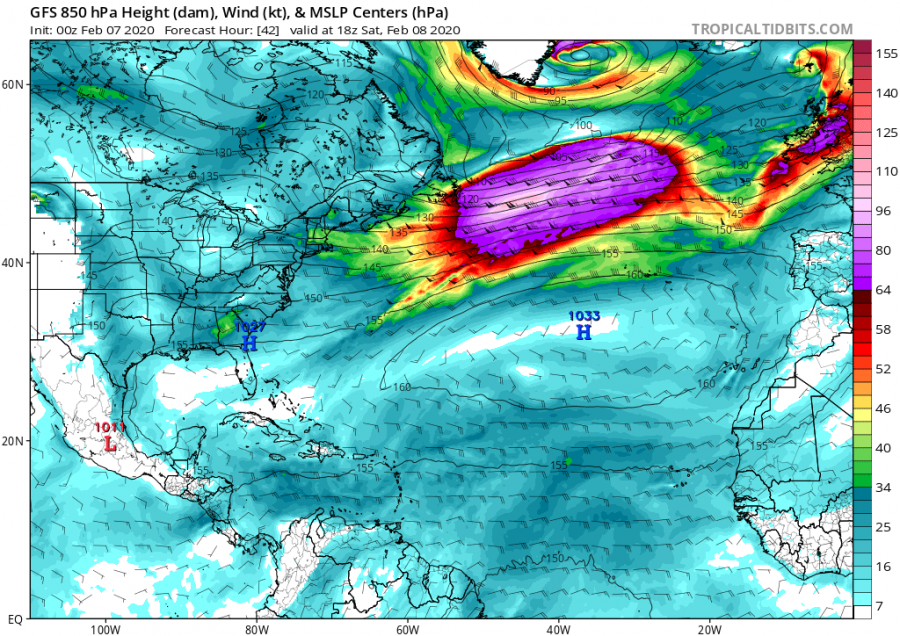 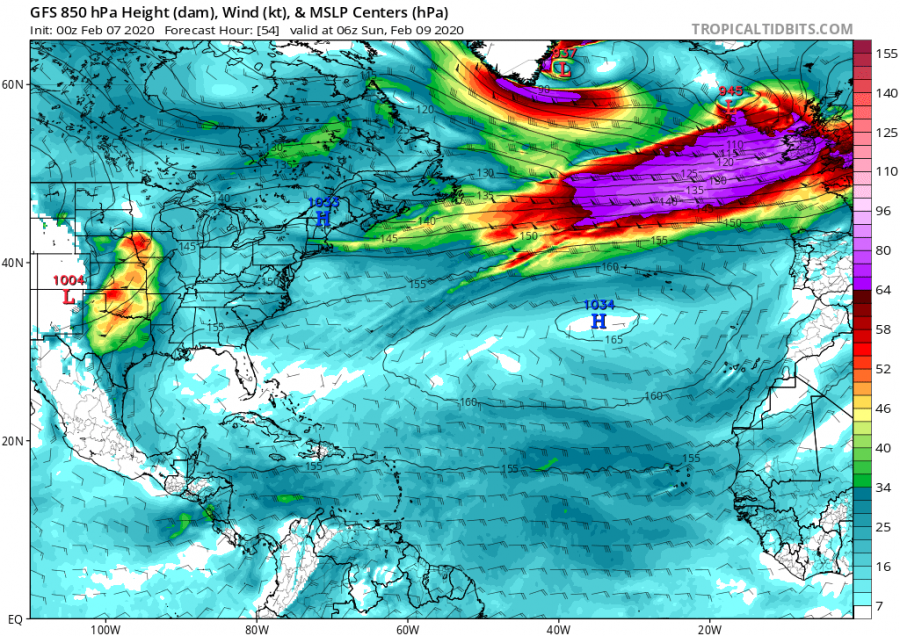 Let’s get into details; Although the first extremely deep cyclone is already placed over the far North Atlantic, the main interest for the west European weather pattern this weekend will be the low-pressure system ejecting off eastern Canada (former ‘bomb-cyclone’), which soon re-strengthens, beginning rapidly intensifying while moving over the Atlantic and blasts into western Europe on Sunday. An impressive central pressure drop is expected, likely with almost 30 mbar pressure change in its core. 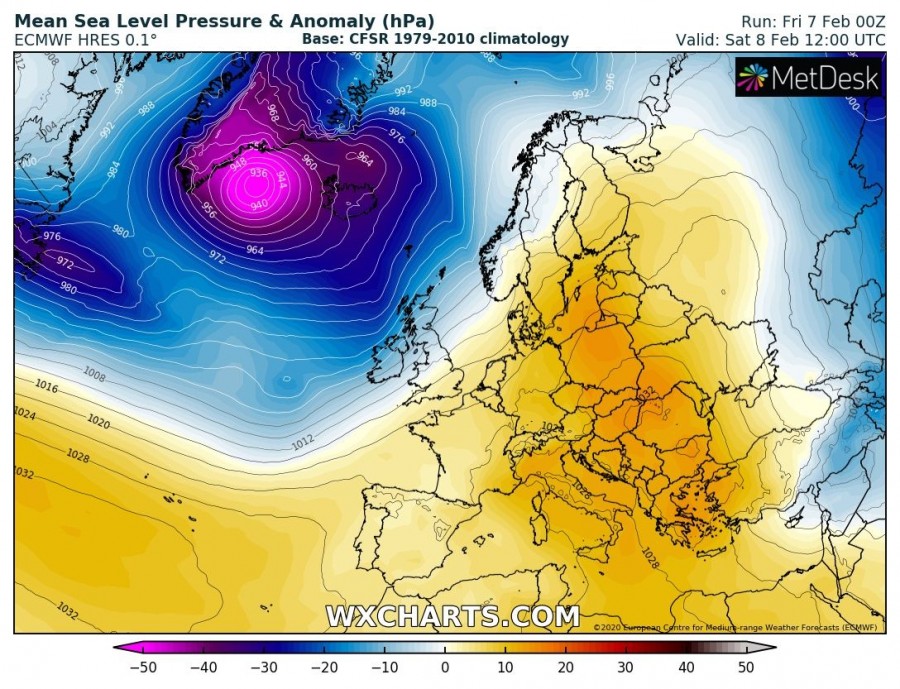 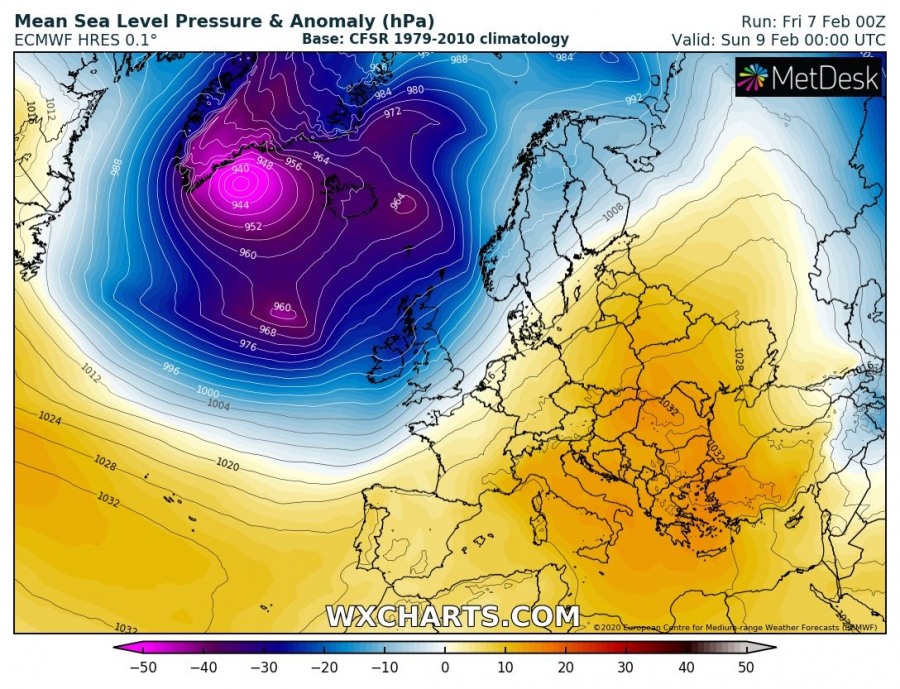 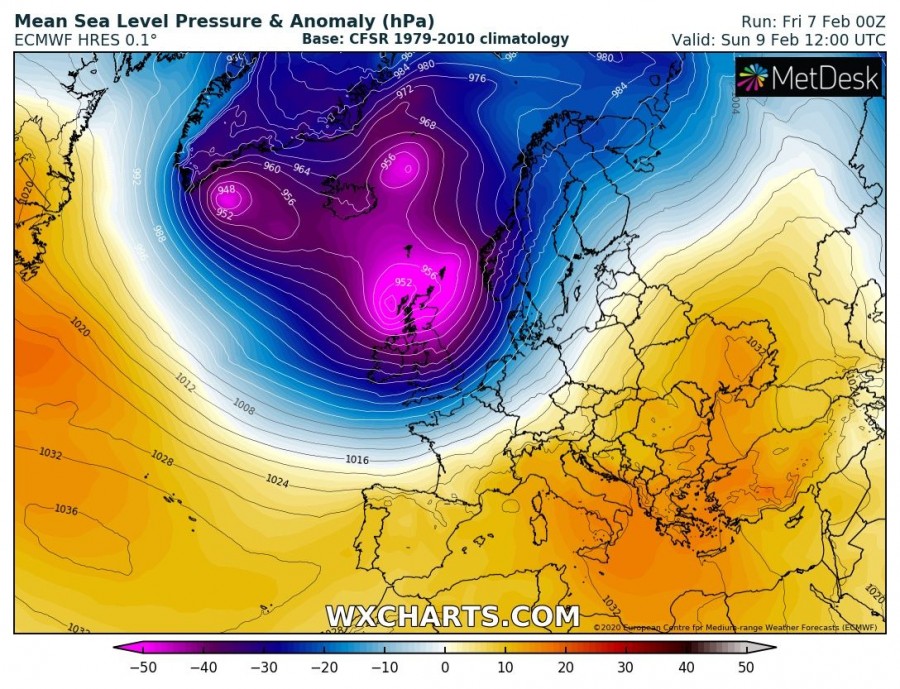 Here is the 6-hour sequence of the deep low-pressure system moving into UK and Ireland, starting Sunday morning due west of the region. An intense frontal system will first push into Ireland, Northern Ireland and Scotland in the morning hours, then spread further across England during the late morning and early afternoon hours. Locally heavy rain with wind squalls is expected, also thundery at times! A huger amount of cold maritime air mass will then spread behind the front from the Atlantic 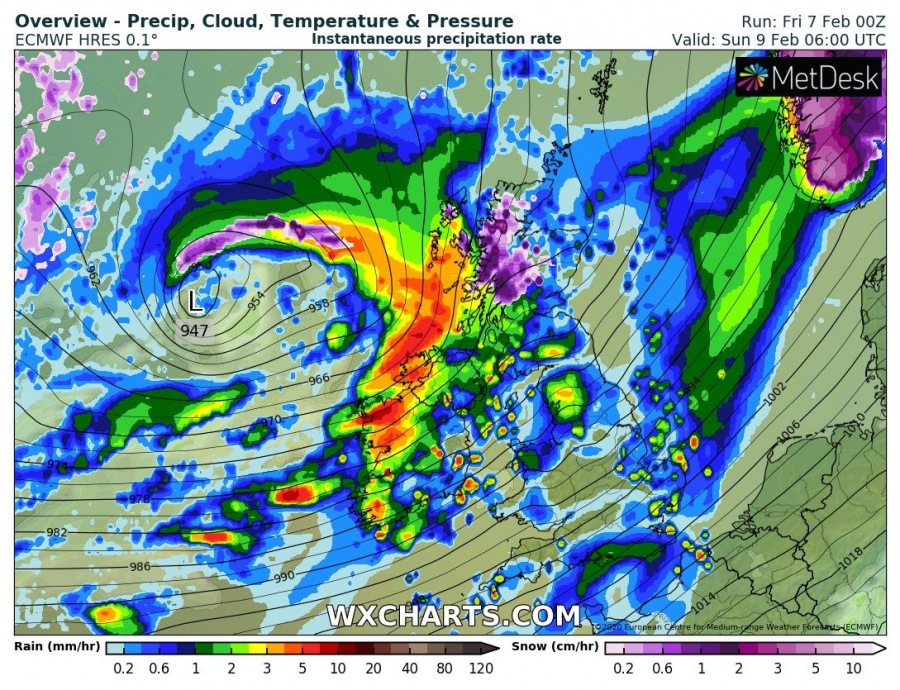 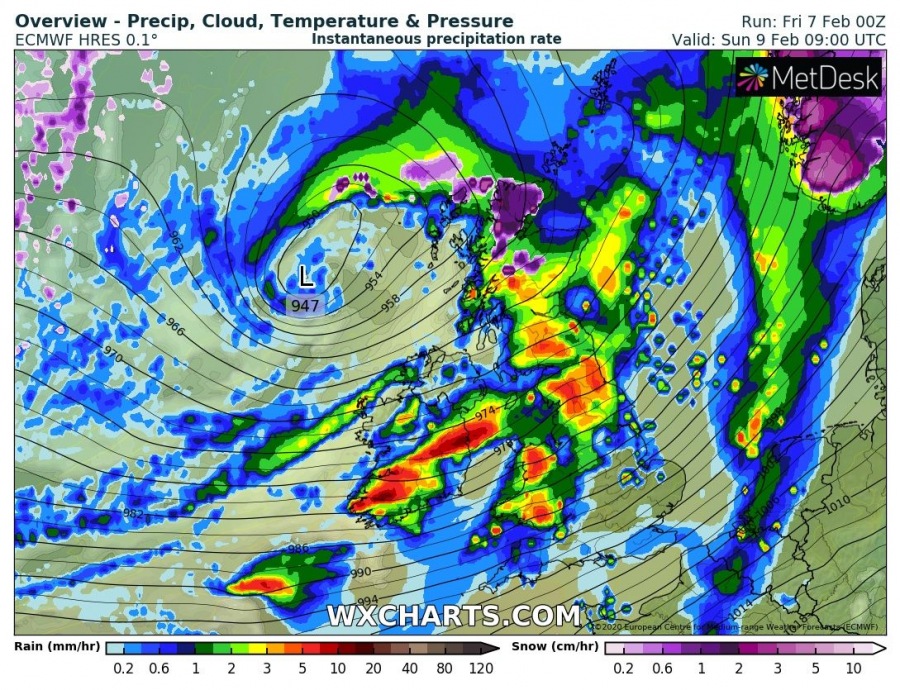 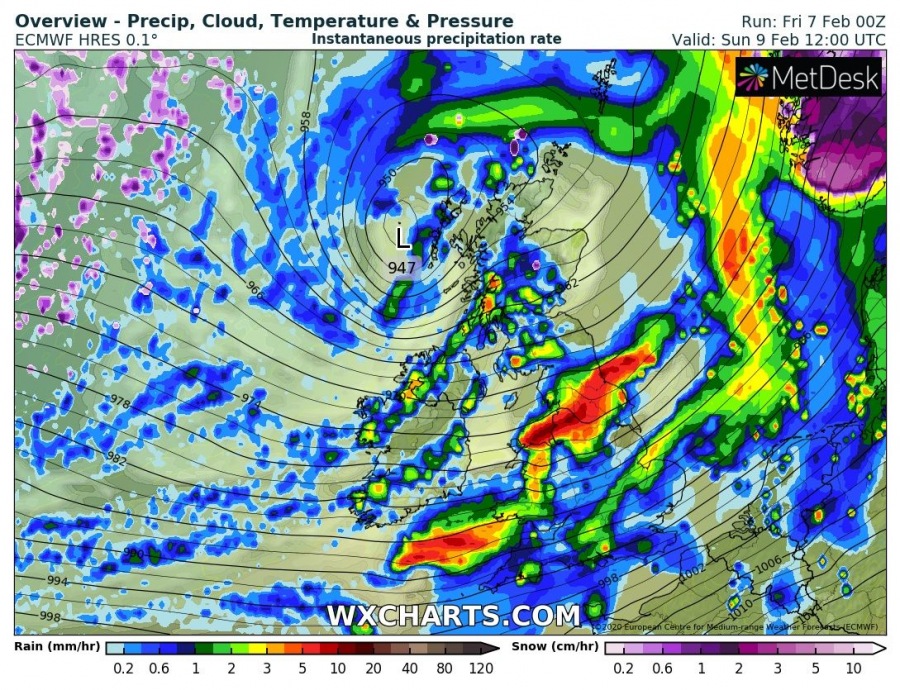 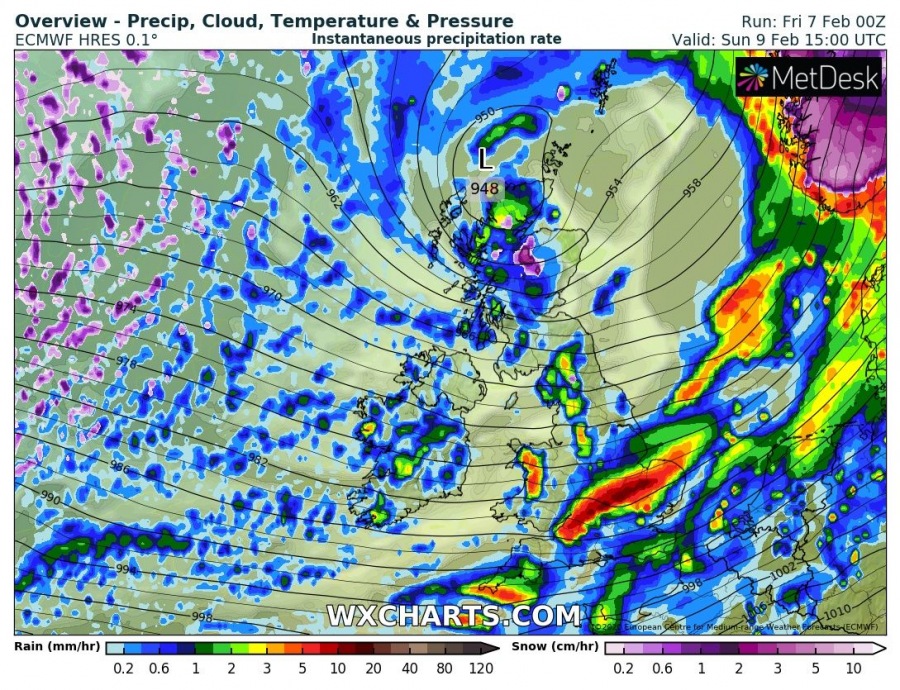 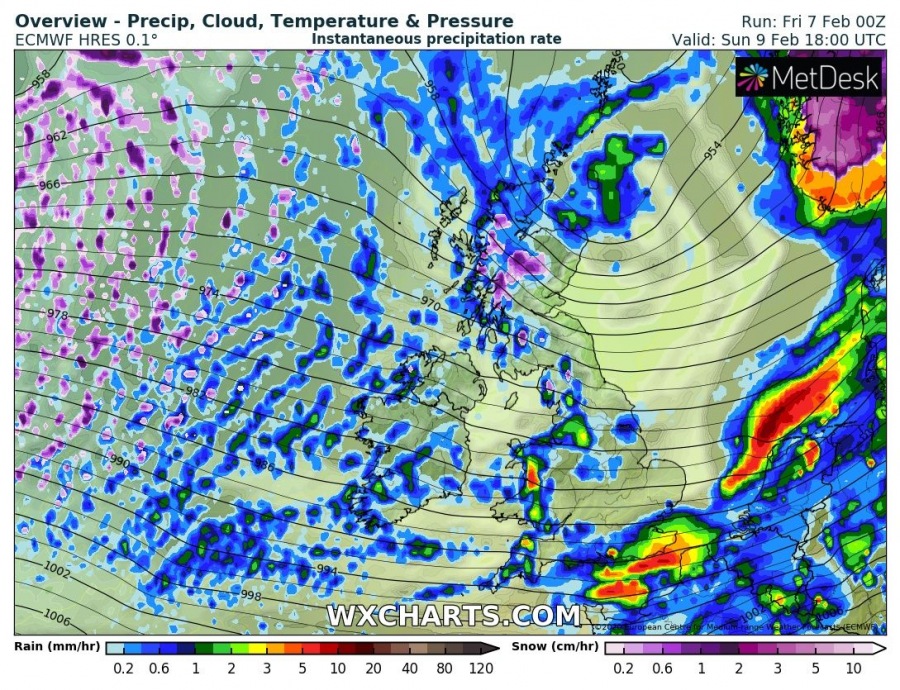 Also, persistent moist westerly flow will establish strong orographic rainfall (and snowfall over the Scottish Highlands) through the weekend, bringing a significant amount of accumulated rain in some areas – up to 150 mm is locally quite possible, especially across west-southwest Ireland, Northern England, Wales, and Southwest England! Quite some snow should accumulate only across the Highlands. Elsewhere, it will be too warm for winter precipitation but intense rain squalls with graupel are expected at least. 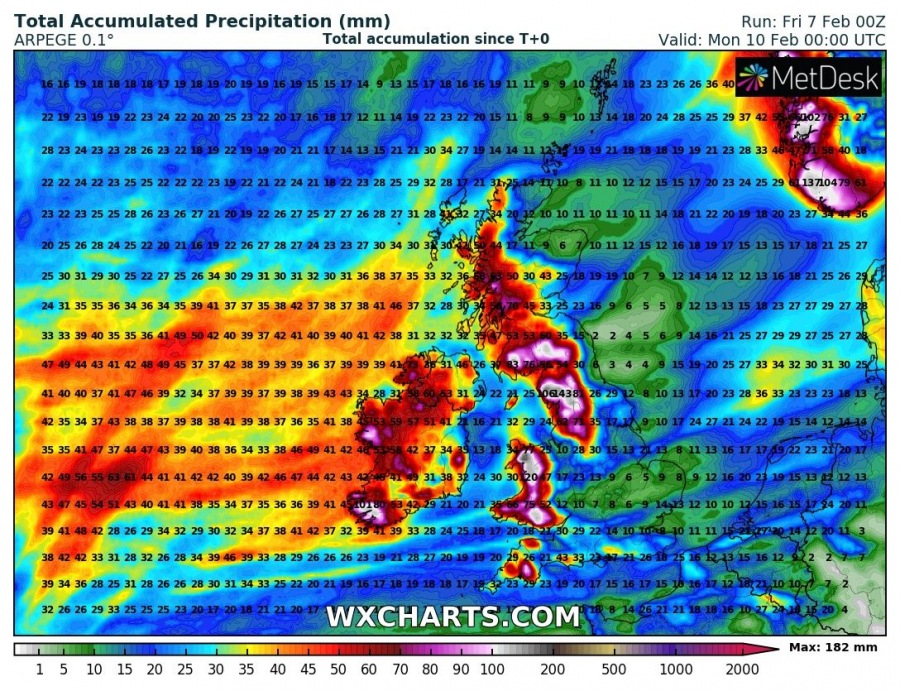 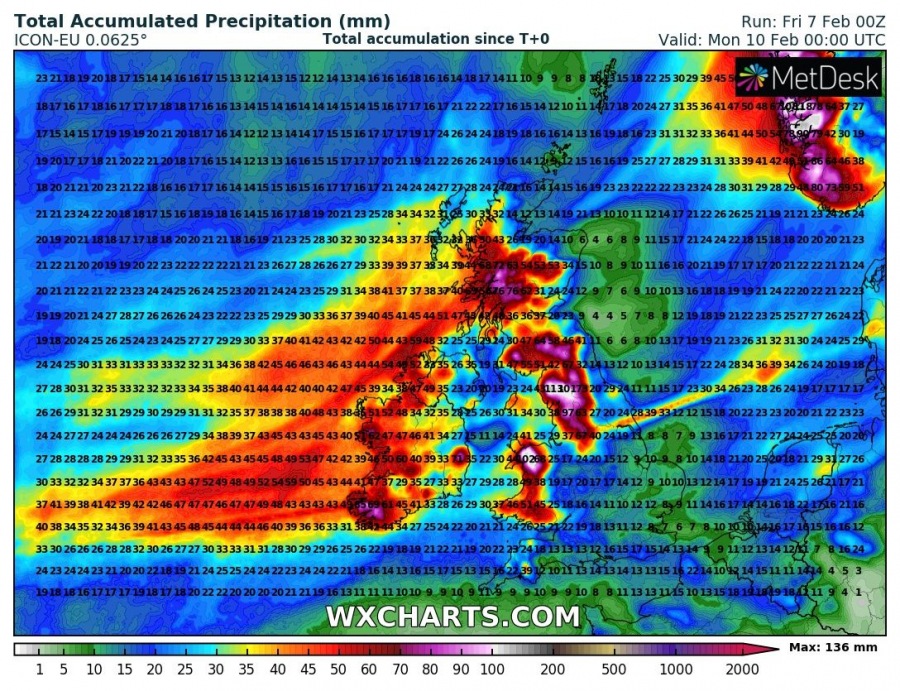 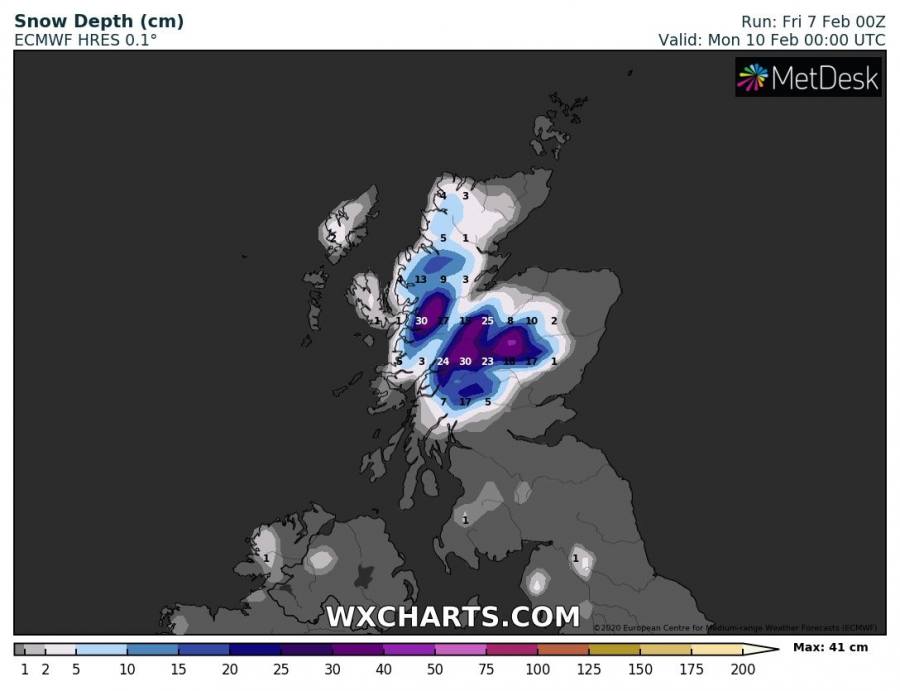 The main concern with this intense windstorm is the very large severe wind field, spreading across the whole western Europe, introducing dangerous wind gusts across much of UK and Ireland, then also further east across the North Sea and SW Norway. Peak gusts are likely to reach 70-85 mph (= 100-140 km/h) across many areas, even higher over the Highlands – possibly in excess of 120 mph (= 190 km/h) again! 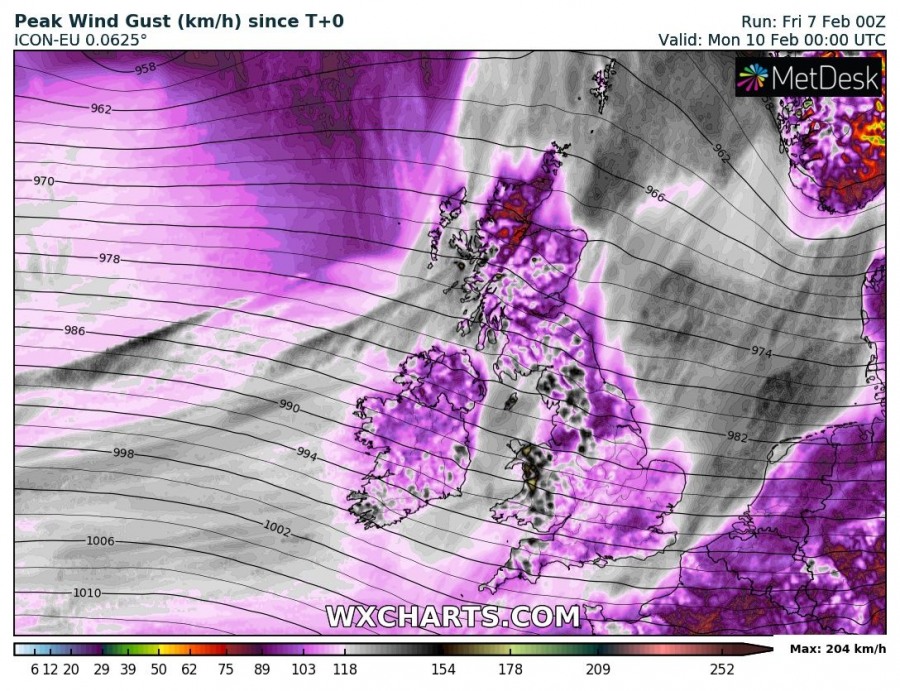 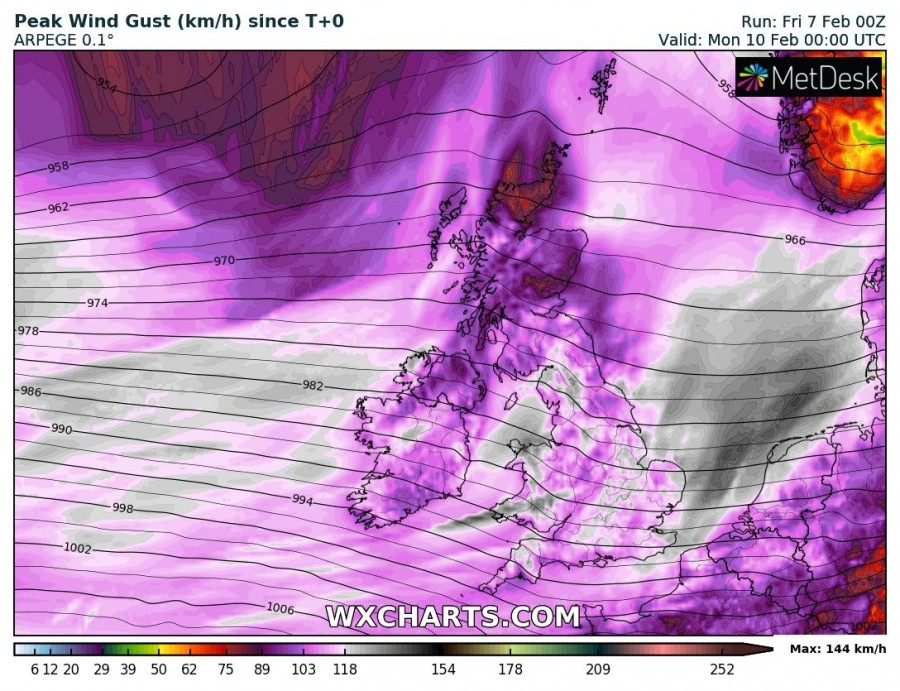 Close-up view of the peak wind gusts swath across the UK, Ireland and surroundings on Sunday morning – up to 80 mph in some area, 65-70 mph across most of the region! 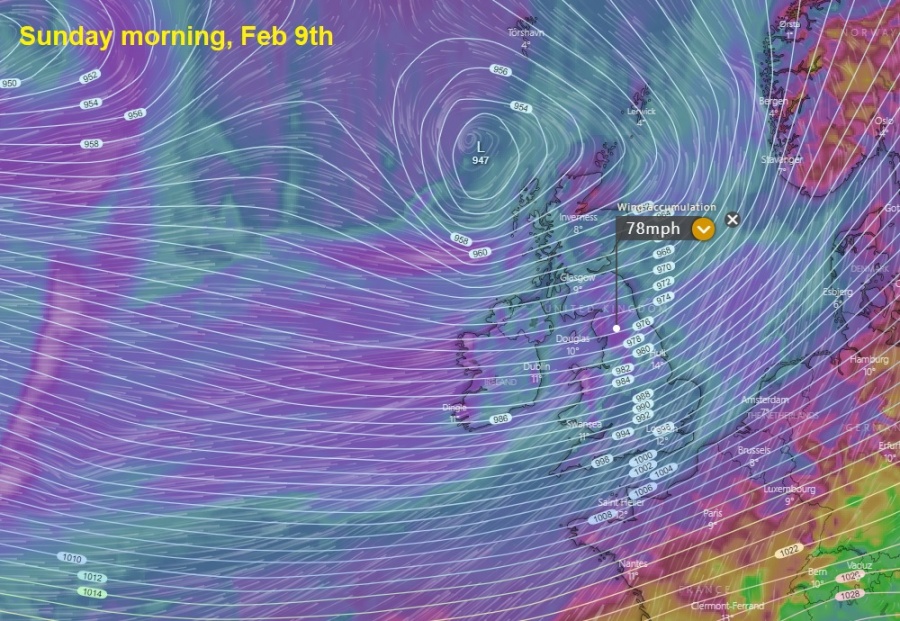 In addition to the widespread winds, major waves are expected across the region, battering the coastal areas of Ireland, Scotland, and England for days. Significant wave heights are also quite likely early next week. 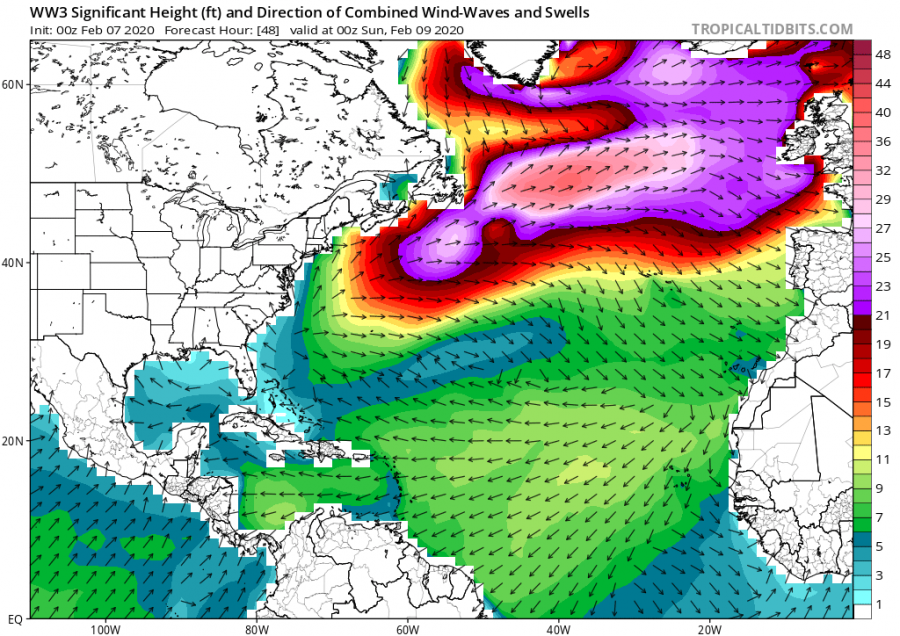 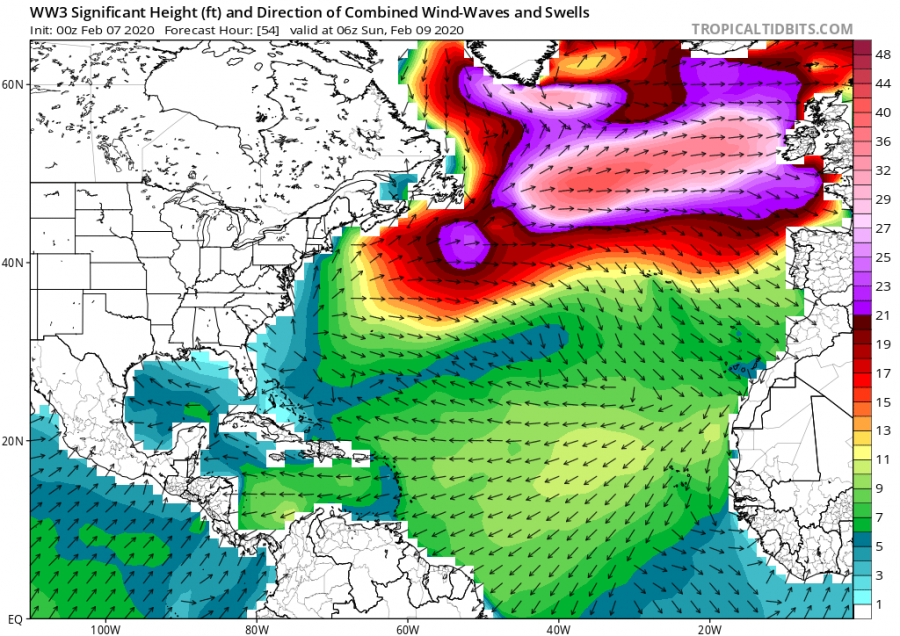 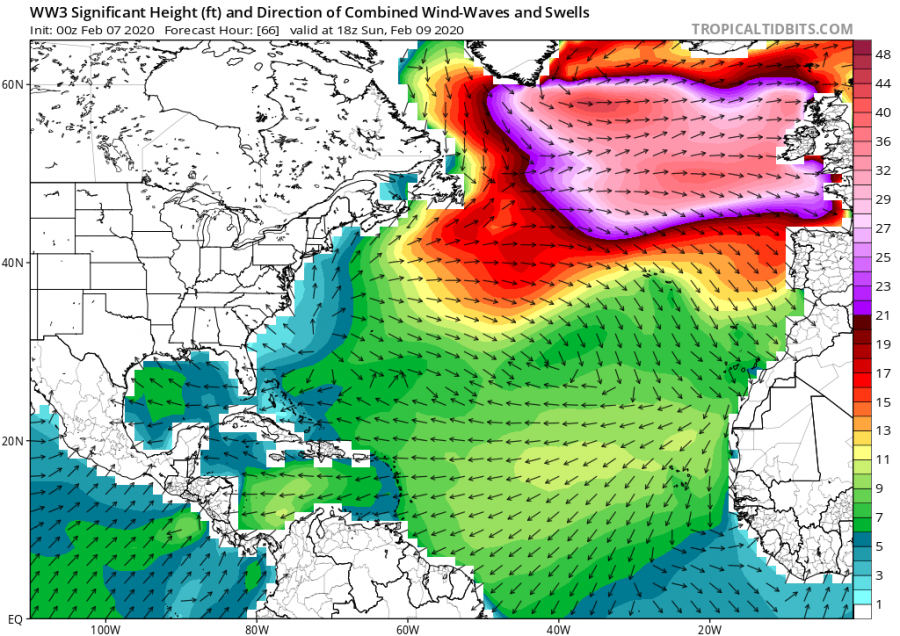 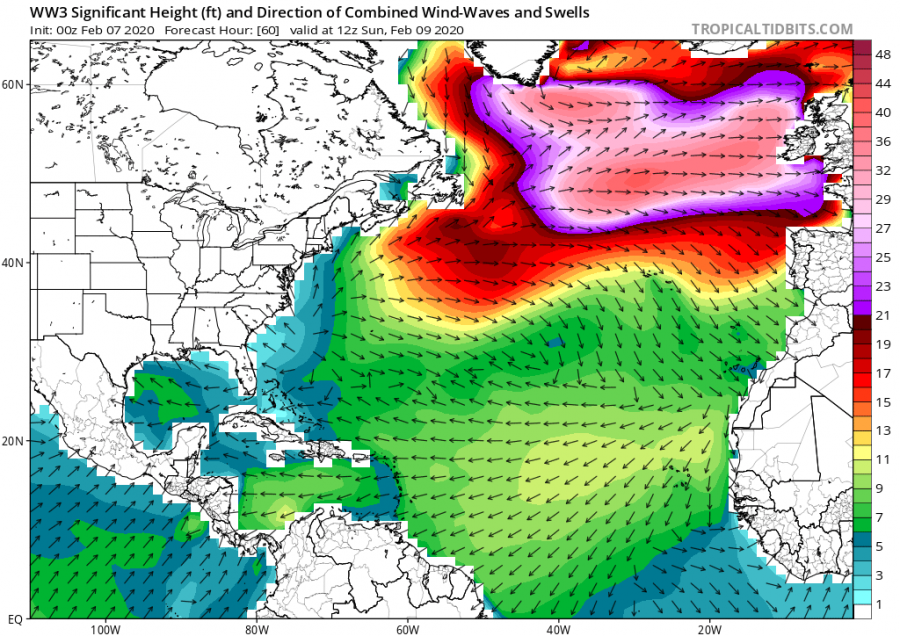 Stay safe and alert for developing dangerous conditions. We are covering this event with further updates over the weekend – stay tuned!

See also – ‘bomb cyclone’ developing over the northeast US and eastern Canada on Friday, Feb 7th: