Major hurricane Delta is now maintaining its powerful Category 4 strength, winds have increased to 145 mph. Although looking relatively small on satellite, it is a violent hurricane. Delta is heading towards the northwest and will severely impact the northern Yucatan peninsula – landfall is expected very near the city of Cancun.

Hurricane Delta has continued explosively intensifying today and is now a solid Category 4 major hurricane. It is packing the maximum sustained winds of 125 knots (145 mph) and a central pressure just shy above 950 mbar.

The NOAA Hurricane Hunters aircraft continued to report an extremely small 4-to-5-nmi-wide eye. There was also some appearance of a pinhole eye visible on the satellite imagery. 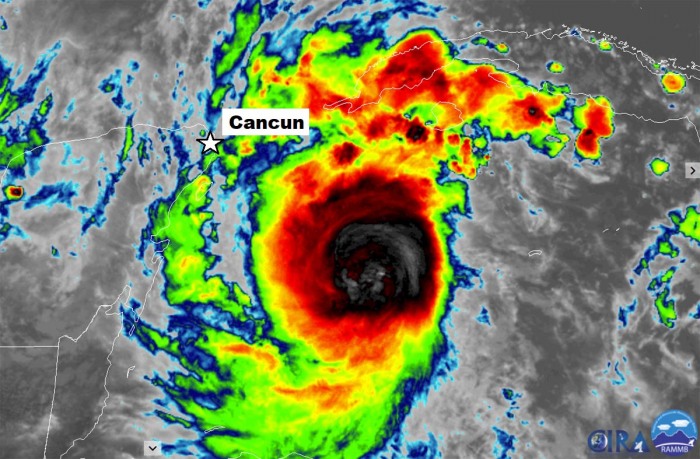 Delta is expected to strengthen further before making landfall near the city of Cancun, the Yucatan peninsula on Wednesday (tomorrow). Cancun’s population is about 628.000.

Life-threatening storm surge and potentially catastrophic wind damage are expected within portions of the northern Yucatan Peninsula of Mexico beginning tonight. All preparations to protect life and property should be rushed to completion. 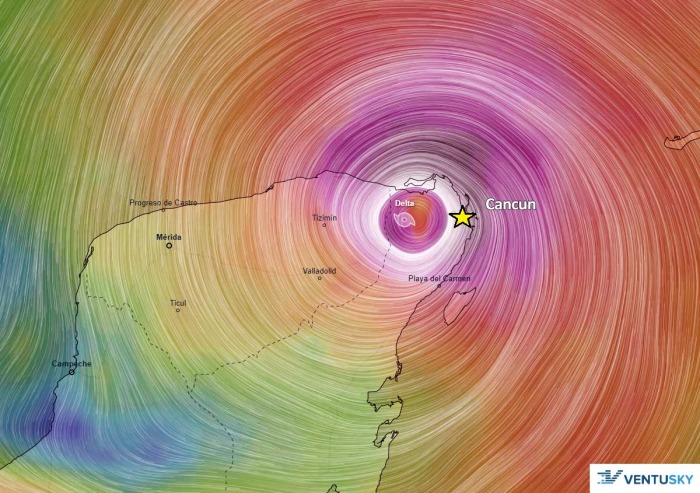 The National Hurricane Center (NHC) noted that Delta could be stronger than indicated, potentially with near 140 knots (155 mph) winds – that is a borderline of a Category 5.

Next: Delta will re-emerge in the Gulf of Mexico, expected to intensify and head for the secondary landfall in the southern United States. Most likely along the US Gulf Coast in Louisiana, Texas, or Mississippi. 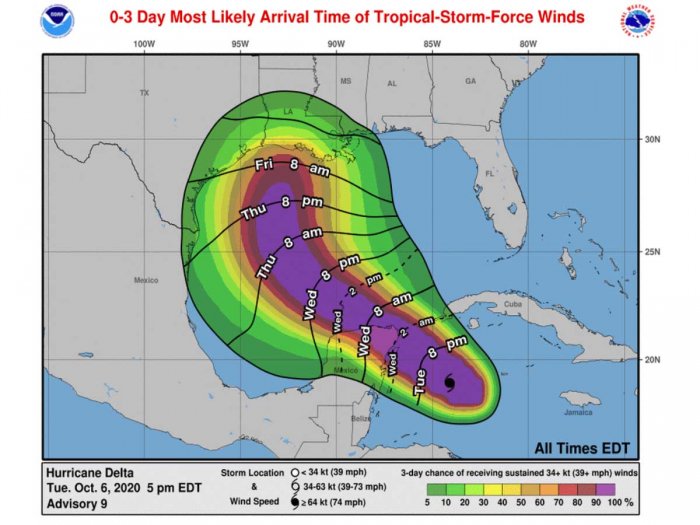 More details on the potential landfall risks for the southern United States will be added on Wednesday.

The initial wind speed is set to 100 kt (115 mph). Delta has become a Category 4 hurricane, confirmed by the latest Hurricane Hunters pass through the center. The central pressure is near 950 mbar, falling fast.

Delta is becoming a violent storm, despite being relatively small for now. 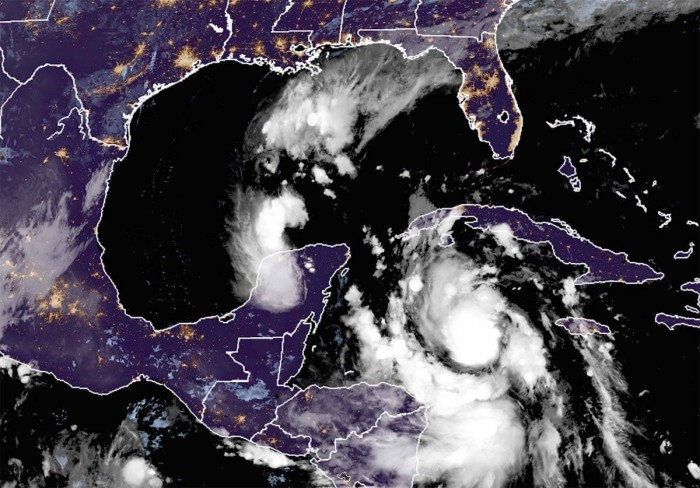 Hurricane Delta has entered a very impressive rapid intensification episode, having strengthened over 50 knots during the past 24 hours. Given both oceanic and environmental conditions along its future track, there is barely anything that can stop its additional rapid strengthening until Yucatan.

Delta got its name on Monday when the National Hurricane Center (NHC) upgraded a tropical depression 26L to Tropical Storm Delta in the morning, located southwest of Jamaica in the Caribbean Sea. Then, Delta began rapid intensification and has already been upgraded into a hurricane Monday night.

The forecasted surface winds are indicating Delta will be a large hurricane, with destructive winds.

There is an extremely dangerous storm surge and hurricane conditions are expected within portions of the northern Yucatan Peninsula of Mexico beginning tonight, and a Hurricane Warning is in effect.

After the landfall in Yucatan, hurricane Delta will re-intensity over the warm Gulf of Mexico and turn towards the northern Gulf Coast.

If Delta makes landfall in the Gulf Coast, it would be the 10th named storm to hit the US in a single season. This is then yet another all-time record.

So far, the 2020 hurricane season has already had nine (9) landfalling storms/hurricanes, which tied the record from 1916!

According to NHC forecasters, Delta has maintained a very deep central dense overcast during the past several hours, with overshooting cloud-top temperatures to -90 degrees Celsius. There are hints of a pinhole eye trying to emerge soon. 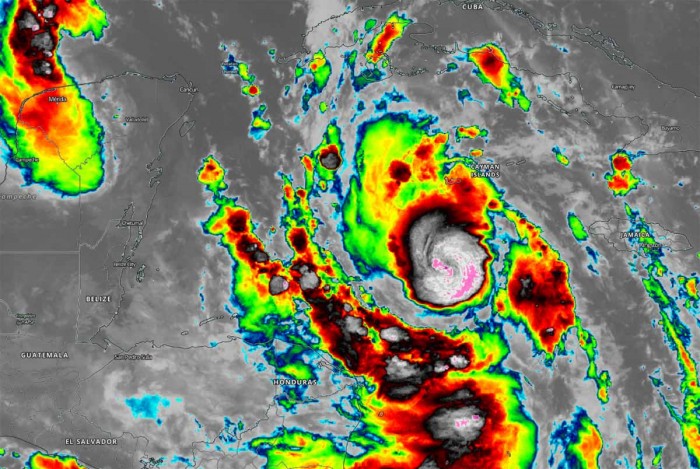 Hurricane Hunters are scanning the system and the last pass through the center, the Air Force plane reported a 4 mbar pressure fall in one hour to 968 mbar, with believable SFMR values of 80-85 kt. 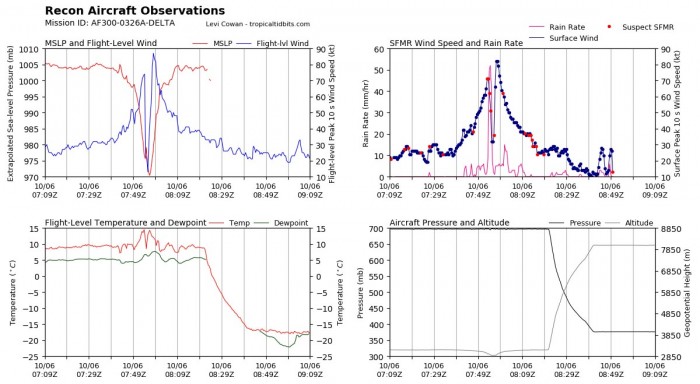 The environmental conditions over the Caribbean region as impressive, but what makes the ideal conditions for Delta’s explosive intensification, are the extremely warm sea temperatures.

With nearly 31 °C across the central and western portions of the Caribbean Sea, conditions are prime for the very rapid intensification of tropical systems. The attached Ocean Heat Content (OHC) map indicates there is around 150 along the path of Delta until it reaches Yucatan. 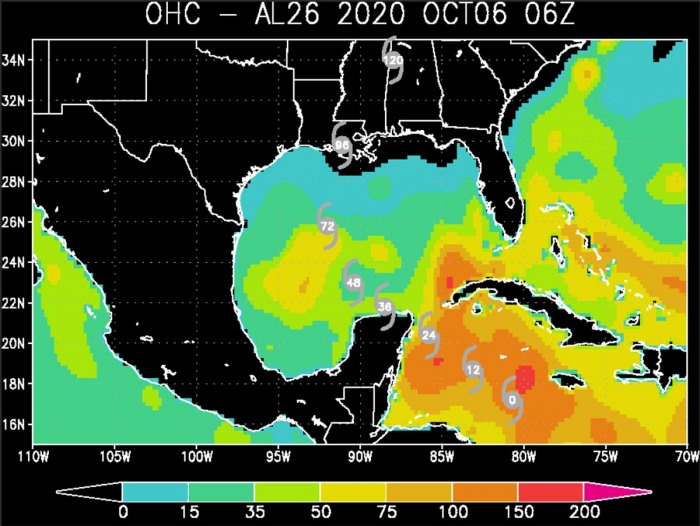 Delta seems to be on track for a potentially destructive landfall near the city of Cancun, the Yucatan peninsula on Wednesday. The storm is expected to make landfall as a likely Category 4.

If landfall occurs in Yucatan of such intensity, it will be the first after hurricane Wilma made a destructive landfall in 2005. This was the only other year when the Greek alphabet letters were used for tropical storm naming. 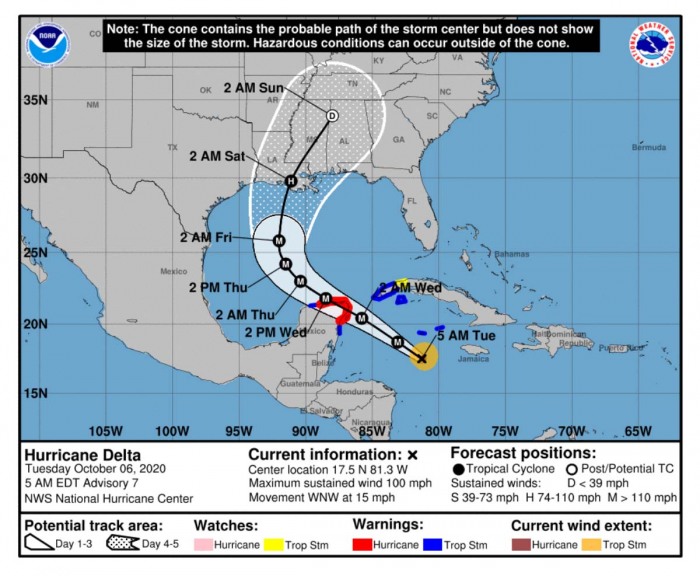 Until it reaches the northern Yucatan, there are low vertical wind shear, high deep-layer moisture, and the very warm and deep waters of the northwestern Caribbean. This is also supported by SHIPS rapid intensification probabilities that are well above 50 percent for most categories.

Therefore, there is not much of cause to stop its further rapid intensification. Delta will develop a violent wind field. It is expecte to affect northern Yucatan, western Cuba and travel across the Gulf of Mexico towards the potential severe impact to US Gulf Coast after Thursday.

Delta will become a *violent* storm over the next 24-36 hours. There is surely a very high potential for it to become at least a Category 4 prior to a destructive landfall near Cancun, in the northern tip of the Yucatan peninsula on Wednesday morning. 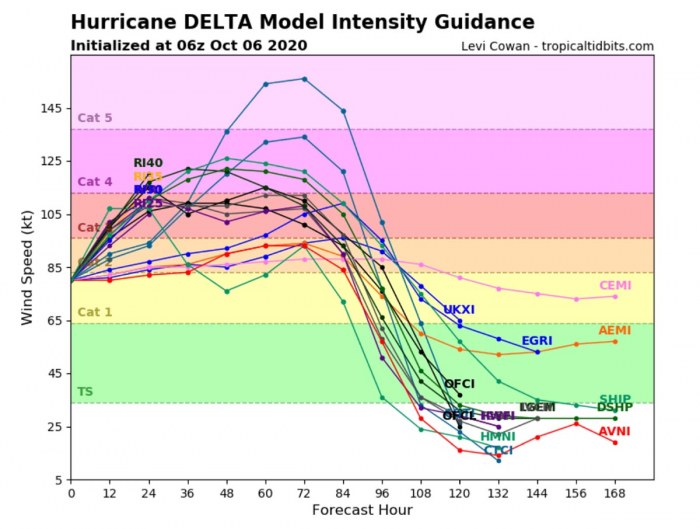 It has to be noted, that some models are even hinting there is a rising potential Delta could intensity close to a Category 5, given so extremely warm seas ahead of it today and tonight.

Re-strengthening in the Gulf

Some weakening is expected due to land interaction, but conditions look ripe for re-intensification over the Gulf of Mexico. Almost all the guidance is higher, now showing Delta reaching Category 4 strength in the 2-to-3 day time frame.

The attached image above is for late Thursday when Delta re-emerges over the Gulf. Definitely, the interaction with Yucatan needs to be watched, as its future behavior will also depend on that. The image is provided by Tropical Tidbits.

Heavy rainfall will affect portions of the Cayman Islands, western Cuba, and the northern Yucatan Peninsula through midweek. This rainfall could lead to significant flash flooding and mudslides. By Wednesday morning, Delta is forecast to cross the extreme northern tip of the Yucatan peninsula, very close or over the city of Cancun.

The attached HWRF model forecast for 10-meter winds and mean sea-level pressure is a great concern. This would be a destructive impact near the city of Cancun, with violent winds, storm surge, and flooding. 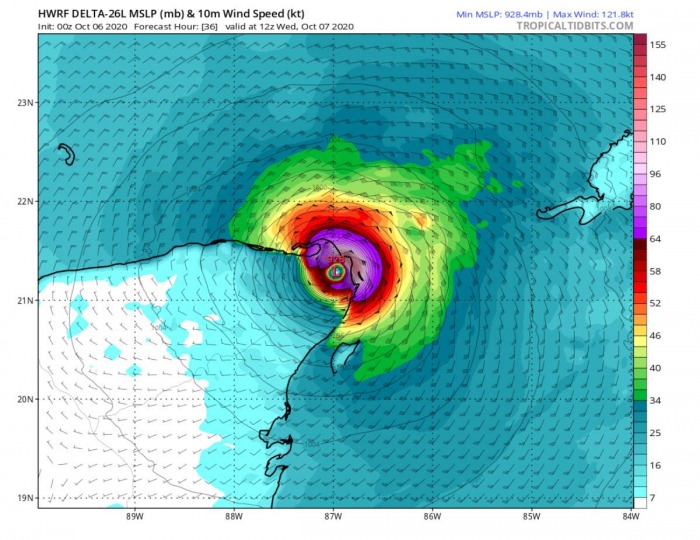 As said, the near-ideal environmental and oceanic conditions could definitely bring hurricane Delta into a strong Category 4 status (or even 5) prior to its landfall in Yucatan tomorrow. The simulated infrared brightness temperatures chart is a real concern, indicating a textbook compact and large hurricane! 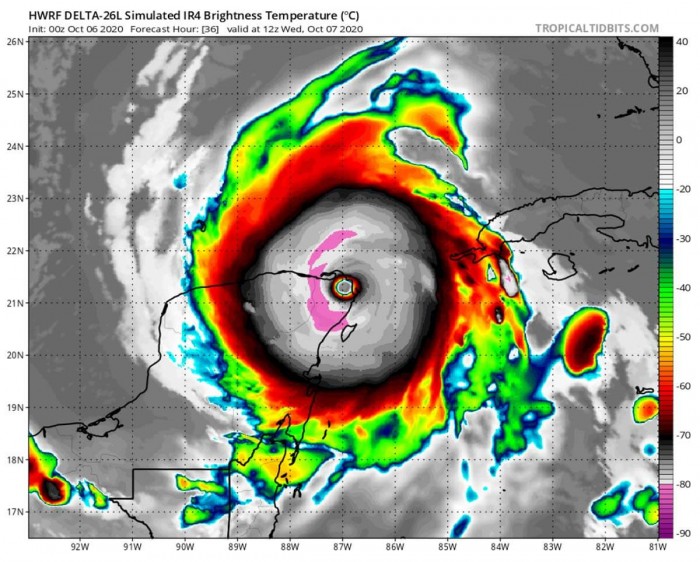 Although there are still some minor changes the Delta’s center (eye) missed the peninsula, its large field, and intense eyewall will graze across the northern parts of Yucatan, including Cancun. Nevertheless, the impact will develop very dangerous, life-threatening conditions.

Gulf Coast and US threats

The potential for heavy rain and flash flooding will increase across portions of the central Gulf Coast, Tennessee Valley, and the southeastern United States as Delta moves inland later this week.

Delta is forecast to approach the northern Gulf Coast late this week as a hurricane. While there is large uncertainty in the track and intensity forecasts, there is a significant risk of dangerous storm surge, wind, and rainfall hazards along the coast from Louisiana to the western Florida Panhandle beginning Thursday night or Friday.

Residents in these areas should ensure they have their hurricane plan in place and monitor updates to the forecast of Delta.

With Delta being the 25th storm this year, how is the Atlantic hurricane season 2020 actually standing? Is it really that extreme? We can compare it with 2005, the only season when Greek alphabet were in use until now.

2005 was also the same year, destructive impact of hurricane Wilma occured over the Yucatan peninsula, first over Consumel island and then just south of Cancun, Mexico. Nearly at the same path Delta is expected this week. 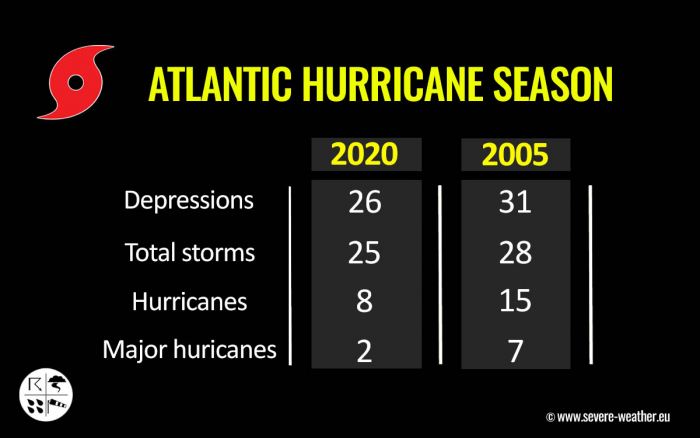 As of Oct 6th, the 2020 season has already had 4 names from the Greek alphabet. While at the end of the 2005 season, there were 6 storms used from this list. The last-named storm that season was Tropical Storm Zeta. 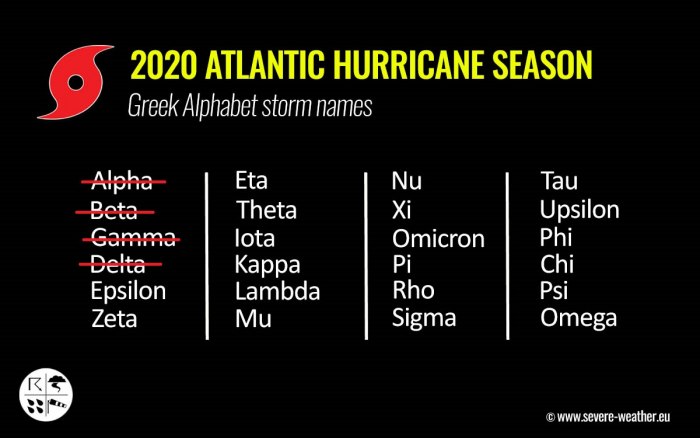 2020 is definitely calling for a new record to be set over the next few weeks. It is, actually based on statistics, quite likely that this year could see more than 28 named storms before the month of October is over.