Woohoo, now this is some great news for the meteo fans! From today (Oct 7th, 2020) onwards, hundreds of ECMWF forecast charts will become free and accessible to all. Publicly.

Let’s start with some initial quotation from the ECMWF:

“Medium-range, extended-range, and long-range forecast charts of temperature, wind, precipitation, clouds, and ocean waves are just some of the products that are becoming available. The likelihood of extreme conditions, as well as tropical and extratropical cyclone activity, are also included.”

Until now, the full access to various forecast charts was restricted to members of WMO (World Meteorological Organisation), the national meteorological and hydrological services of ECMWF’s Member and Co-operating States* and indeed commercial customers. 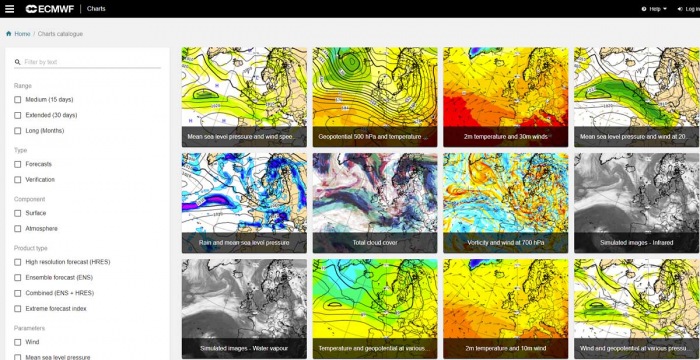 The image above: Forecast charts cover all regions of the world; the figure shows just a selection of the hundreds that are being made available for free.

Member States also have access to the supercomputers and permanent tape storage. 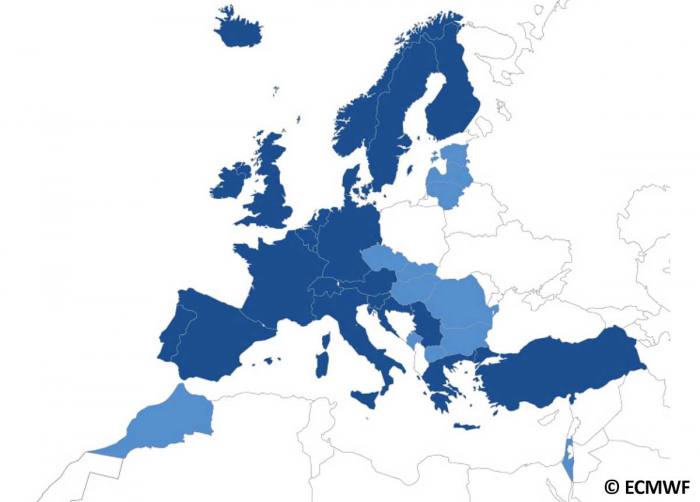 Up to now, their access was subject to a range of bespoke licenses and often incurred charges for customers. Only a few charts were freely available.

What is also important to note is that “Making these hundreds of charts free and open means that, not only is there no charge for the information, but users can also share, redistribute and adapt the information as they require, even for commercial applications, as long as they acknowledge the source as ECMWF. The charts are available under the Creative Commons license (CC-BY 4.0)”.

These changes also mean a move to an open data policy for historical information in ECMWF’s huge data repository. The Meteorological Archival and Retrieval System, or shortly, MARS.

MARS contains tons of valuable data with hundreds of petabytes of data including recent and past forecasts, analyses, climatological data, and research experiments. It represents the largest archive of such data in the world!

“Making these MARS data open will simplify and expand their use and, importantly, allow their re-use, thus stimulating further research and the development of applications related to weather and beyond. For more information about accessing our archive data, please contact us.”

An example of tropical weather forecast data access below. There are numerous data available, definitely a great step ahead for many: 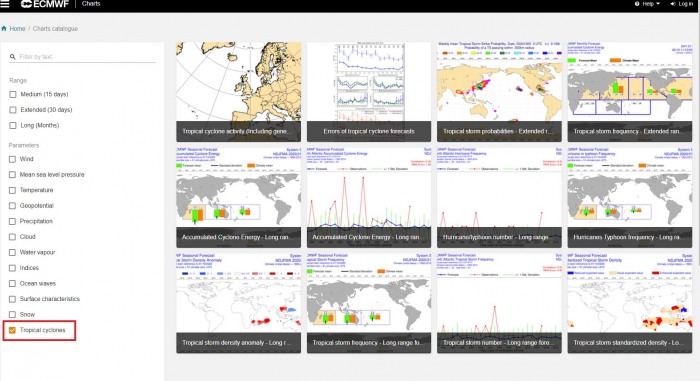 ECMWF statement was actually, an inspiration: “These changes are part of broader developments across Europe to encourage the wider use of public sector data – for the benefit of all.”

Getting free and open data aims to support creativity and innovation in the field of scientific research as well as weather applications. This news is the first step, while “it has the potential to already increase accountability and transparency, and enable more necessary and critical scientific, social and economic advances”.

Here is a typical use of ECMWF model forecast charts globally. The attached animation hints at the weather patterns developing over the North American and European continents. Warmer weather is forecast over the United States and Canada, while cold weather spreads across the western half of Europe in the coming days:

There are now available data from all past ECMWF forecasts, back to the early 1980s. Those are just some of the billions of fields within ECMWF’s huge MARS data repository.

According to the ECMWF, “The epitome of the term ‘big data’, MARS offers immense opportunities for machine learning, where a computer uses observations or other data, to ‘learn’ relationships between different variables. If there are sufficient data for training, machine learning can be used to develop numerical tools that can mimic complex systems. In fact, researchers are using machine learning to investigate the development of a ‘digital twin’ of the Earth system. Reanalyses and simulated satellite data from the MARS repository have been key to this work.”

Forecasters of the national services then rely on WMCs for the information they need to carry out their operational activities and in particular to increase public awareness through warnings of severe weather events.

These are indeed only a couple of examples, but this shows how much has already been achieved through free and open data. And this offers a glimpse of how much more could be possible in the future.

The answer is simple and this discussion has been ongoing for quite some time now. The European Union and ECMWF Member and the Co-operating States are themselves moving towards an open data policy.

Rolf Brennerfelt, Chair of ECMWF Policy Advisory Committee, commented: “The ECMWF Member States have been keen for the Centre’s data to be open and free for a while. The societal benefits associated with free and open data are big. We are aware that the move comes with its financial challenges, but the benefits outweigh those challenges. We are in a period of transition, and this first batch of data being made freely available is a very good start and illustrates well our commitment to this principle.”

In the European Union (EU), a Directive on open data and the re-use of public sector information, also known as the ‘Open Data Directive’* entered into force on July 16th last year (2019).

The Directive focuses on the economic aspects of the re-use of information. It encourages the EU Member States to make as much information available for re-use as possible to the general public.

This Directive also introduces the concept of high-value datasets, which indeed also includes weather data, the re-use of which is associated with particularly important benefits for society and the economy.

*Read more about the Open Data Directive here: European legislation on open data and the re-use of public sector information.

So, what’s ahead in Europe now?

A developing pattern over the North Atlantic and Europe reveals a large negative anomaly of 500 mbar geopotential heights over western and central Europe. This typically means wet and cold conditions, so unsettled weather conditions are likely over the 5-10 days. 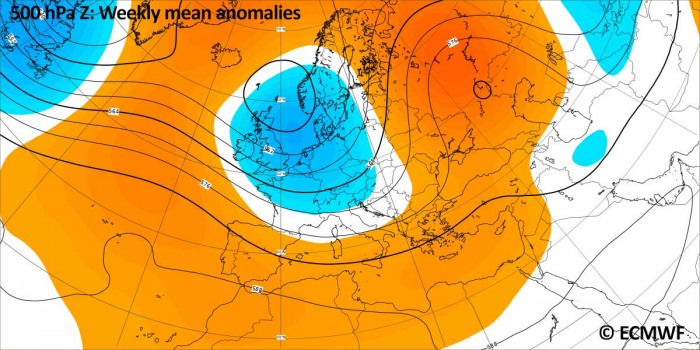 If we take a look over the cold weather and temperature probabilities, there are very poor chances of temperatures below zero in most of Europe. It could be some cold days over central Europe and the Balkans with the frontal system next week, but the cold is mostly forecast over northern Europe and Russia through mid-October. 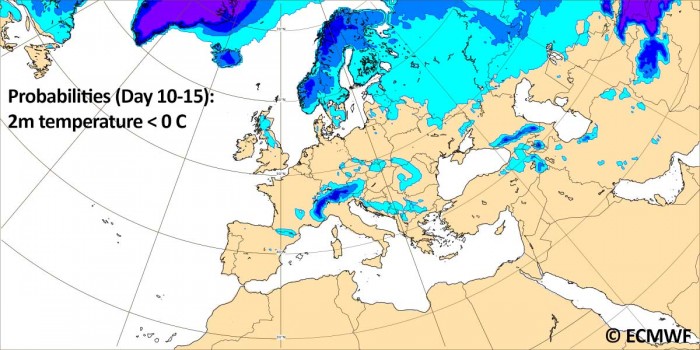 As we discussed in our deep model analysis a few days ago, the upcoming winter season 2020/2021 is forecast to be under the spell of a strong La Nina cycle. 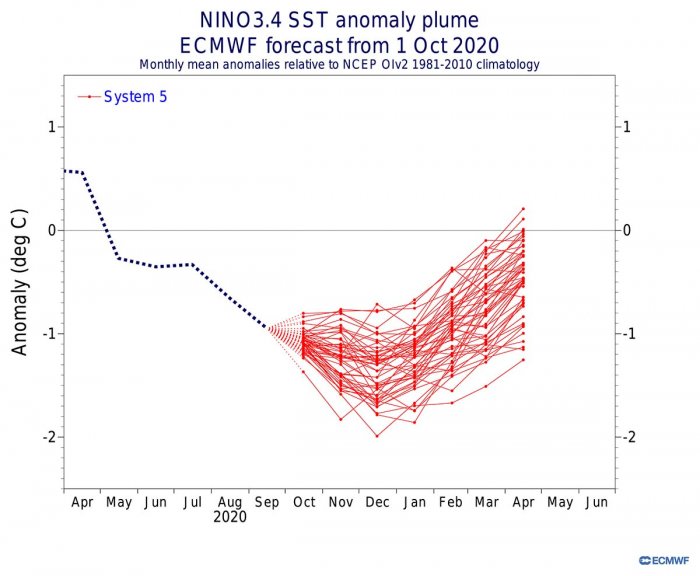 The above ECMWF model does confirm a quite strong La Nina is developing, becoming even stronger through the winter months.

ECMWF model hints at a strong high-pressure system in the North Pacific, through the period December 2020 – February 2021. This is quite typical of a La Nina. The low-pressure system is developed over western Canada. 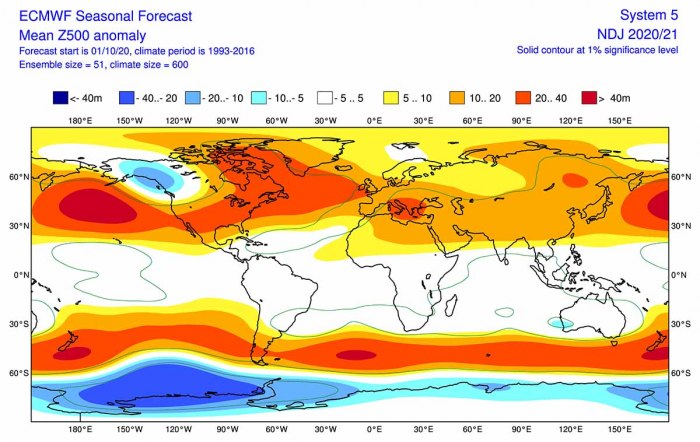 We can also see the North Atlantic in a positive NAO mode. Most likely if the high-pressure system in the central Atlantic can crawl further up north, blocking the flow and creating a more northerly flow into Europe.

The temperature forecast below shows much of North America, Europe, and northern Asia in above-normal temperatures. Alaska and Western Canada will be colder than normal. 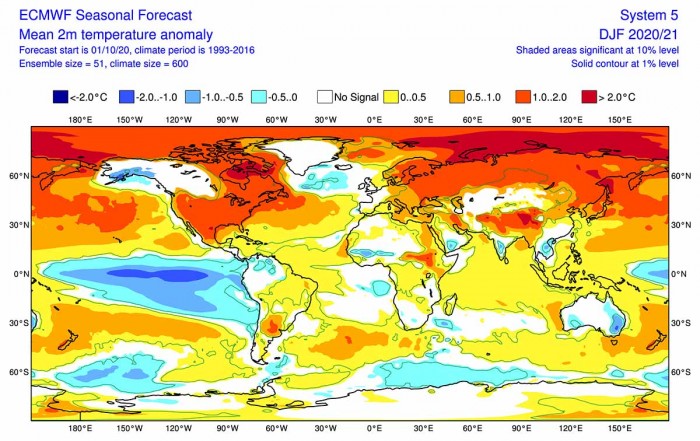 Although Europe also features higher than normal temperatures, th western parts are forecast to remain near average, as no signal of significant anomalies is seen. This usually hints at occasional meridional flow with cold outbreaks from the Arctic region towards the south. 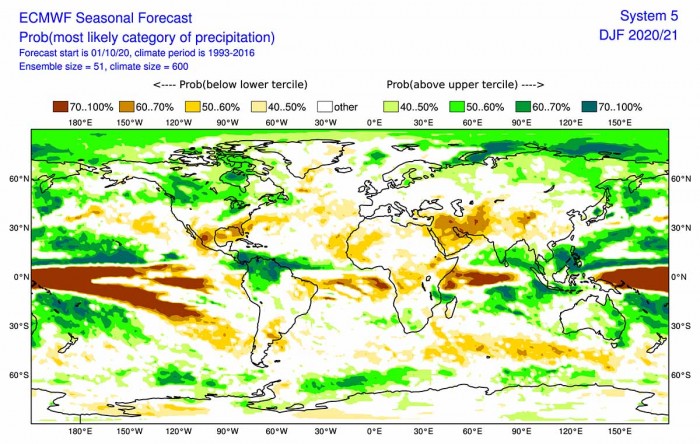 Europe is basically a complete neutral when it comes to precipitation anomalies. This indicates that the westerly flow pattern is not particularly strong, meaning that a higher pattern diversity is likely to be expected.

Recap: Europe is now increasingly likely to expect a warmer than average temperatures over most of the continent. This indicates that cold outbreaks might be less frequent than normal, meaning the higher winter average at the end. Near-normal wet conditions are likely over the mainland. As typically, the British Isles and Scandinavia could have more unsettled winter given the jet stream positioned over these regions.

A classic La Nina type warm winter is forecast across North America this winter. The colder and snowier conditions are expected over most of western Canada and Alaska.