Tornado Season 2021 peak is here, with a potential severe weather outbreak developing across the central Plains over the next 48 hours. The threat for large and destructive hail, very damaging winds and tornadoes exists. Southern Nebraska and northern Kansas will see the worst during the late Wednesday afternoon and evening, while Thursday brings dangerous storms further south across Missouri and Oklahoma.

The general weather pattern across the Contiguous United States indicates there is an upper-level trough moving across the northwestern portions of the country, expected to translate towards the Midwest through Thursday, with a deepening surface low towards the central High Plains today.

In response to this wave, a quite strong warm/moist air mass advection is underway farther north across the central Plains, while a favorable upper-level divergence provides the support for storm initiation along the surface front to the east of the Rockies this Wednesday afternoon, as well as tomorrow further south. 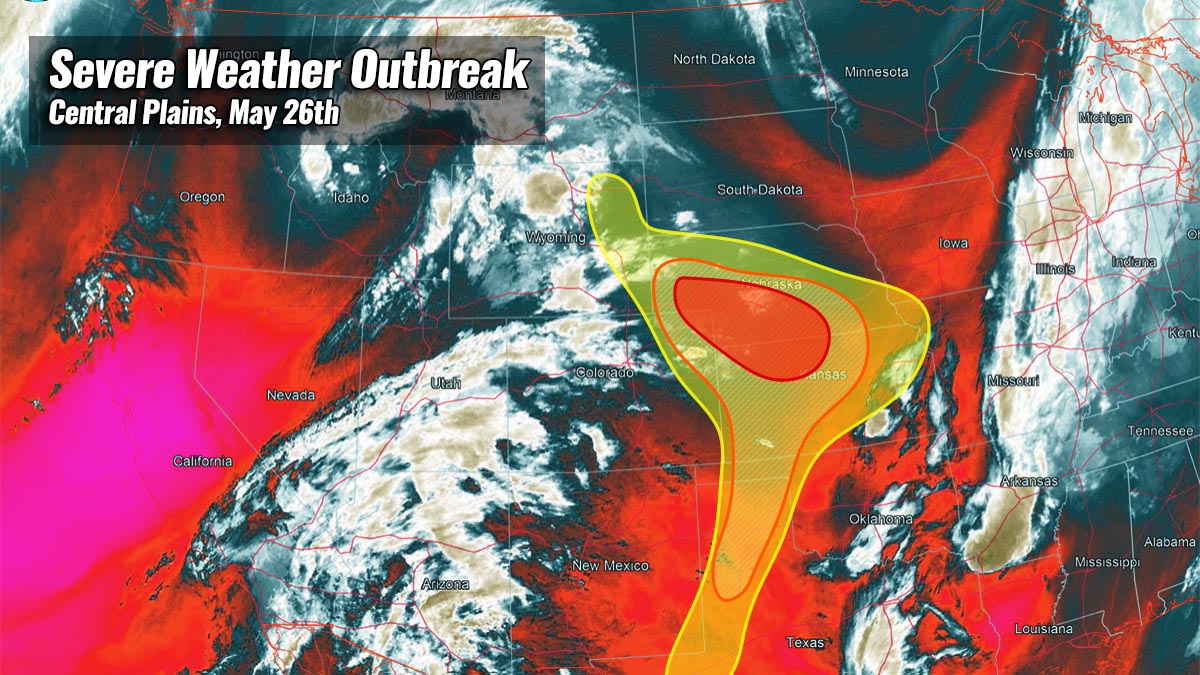 On Wednesday, the main areas for the development of dangerous storms will be across Southern Nebraska and Northern Kansas while Thursday brings severe weather outbreak further south. Parts of Texas, most of Oklahoma, Missouri, northern Arkansas, and southern Illinois will be in the most robust severe threat.

The attached water vapor satellite imagery animation reveals the emerging upper-level trough into the northwestern U.S. with air mass being favorable for widespread severe thunderstorms development across the central Plains later this afternoon.

Widespread large to locally destructive hail will be possible. Some baseball-sized hail is likely with the most intense supercell storms. In addition to the damaging hail and tornadoes, widespread damaging winds with some hurricane-force gusts are possible when a large cluster of storms (MCS) forms with the strengthening of the low-level jet in the evening hours.

Tornado season is referred to as the period in which tornadoes are most common, and it usually lasts from March through June across the favorable region for their development in the United States, known as Tornado Alley. However, many tornadoes, including violent tornadoes and major tornado outbreaks, have been documented in the United States during every month of the year. 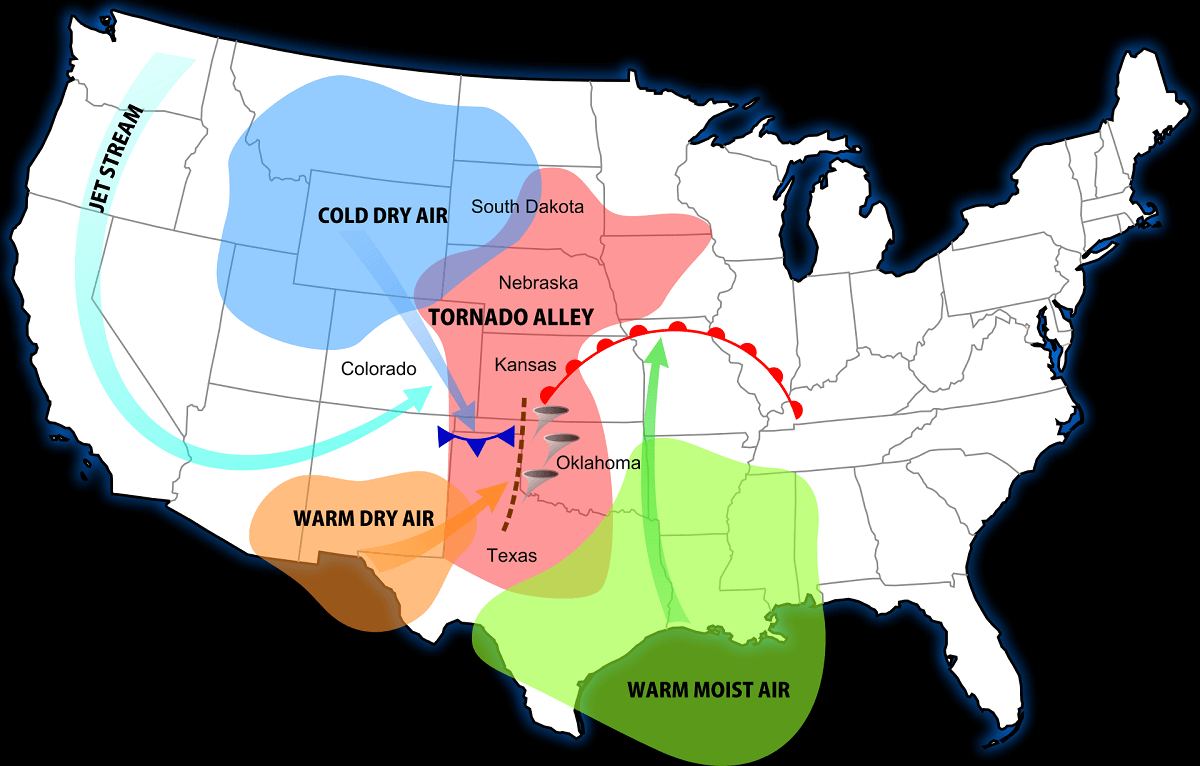 The peak of the tornado season for the southern Plains (e.g., Texas, Oklahoma, and Kansas) is from May into early June, while the Southern U.S. sees tornadoes earlier, from February through April. The Northern States has the peak of tornado season through June and July. Tornado activity also extends into portions of southern Canada.

Although it was a very slow start of the tornado counts until mid-March this year, the numbers were rapidly improving until mid-April as tornado season 2021 ramped up. Since then, the activity was near the long-term average in regard to tornadoes across the United States, going up with a bit faster rate this May. 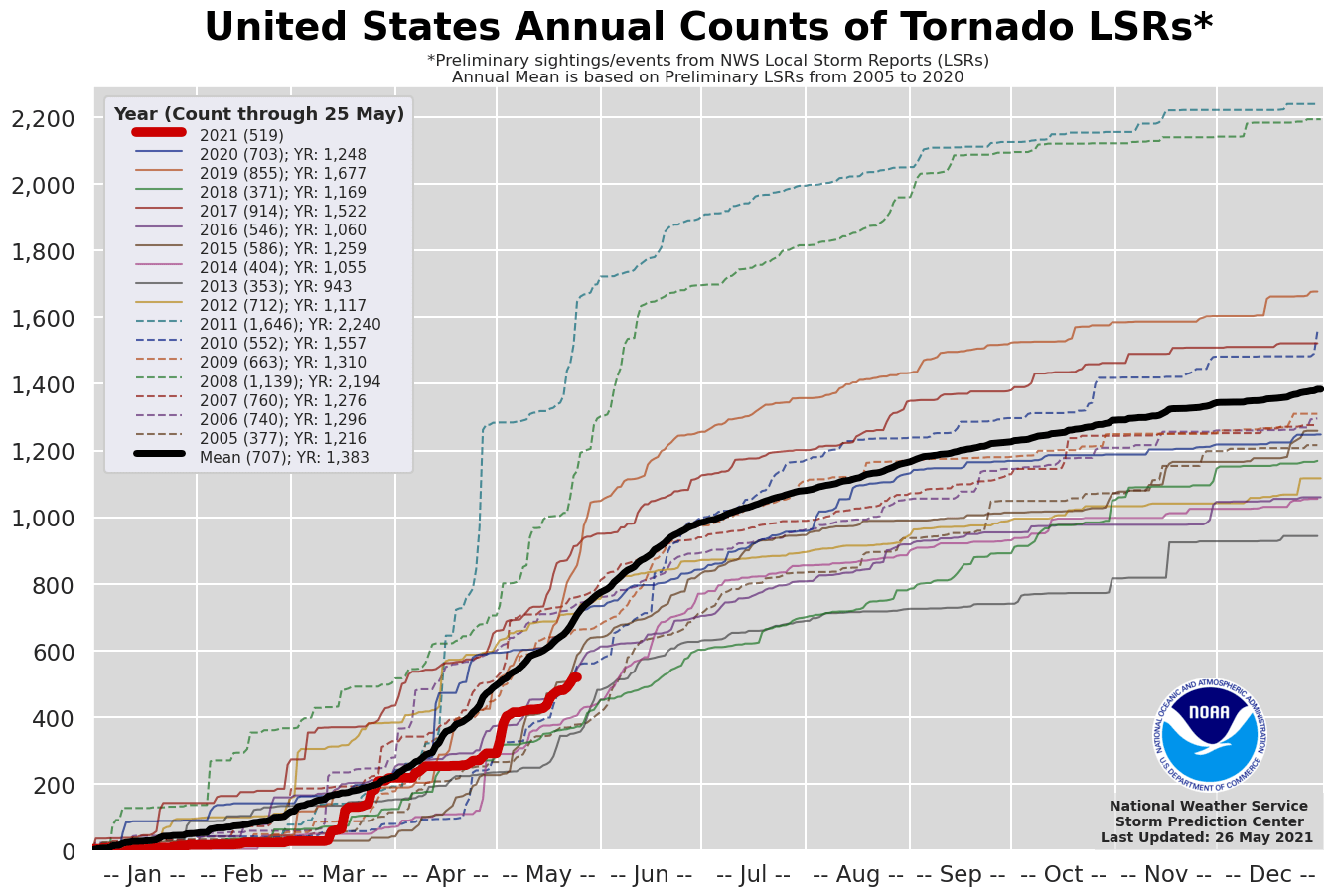 As we can see on the U.S. annual counts of tornadoes above, counted until May 25th for this year, there were 519 preliminary tornadoes reported across the United States. This is about 75 % of an average year which brings about 710 tornadoes to this date.

There were several tornado outbreaks already this season, including the one on St. Patrick’s Day which helped to boost the statistics, and other events as well. So the total number of tornadoes is growing, but still lagging a bit behind due to the strongly limited activity through the first two months and also during the below-average activity through most of April.

The peak of the tornado season is usually during most of May and the first half of June, so it can be expected that the tornado numbers will continue to increase in the following weeks.

First, potentially bigger events will happen over the next two days, today and tomorrow. Both days are likely to bring quite a few tornadoes besides the other severe weather threats across the central and southern Plains.

A moderate (MDT) risk has been issued by the Storm Prediction Center (SPC) for Northern Kansas into Southern Nebraska for Wednesday. Scattered severe weather is also expected across the southern High Plains and much of the northeastern US where damaging winds are the primary concern. 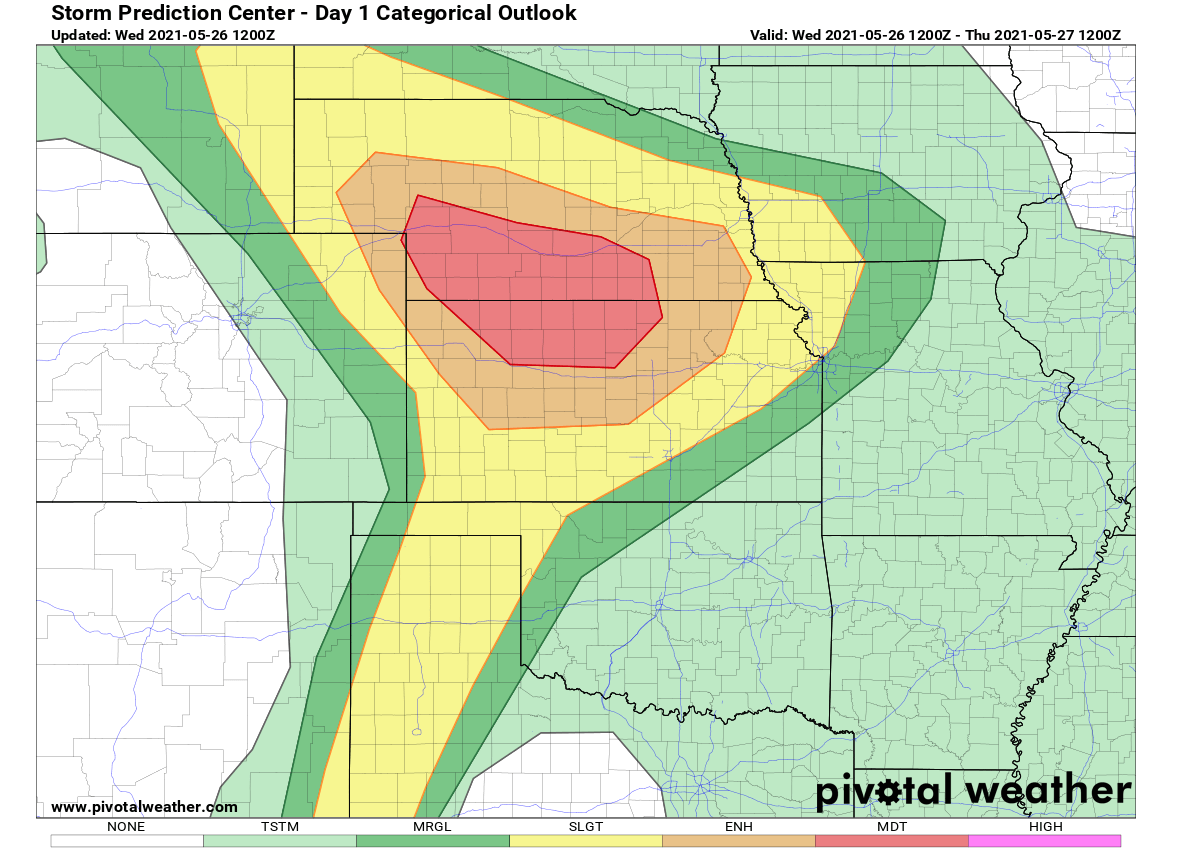 According to the SPC, the central and southern Plains will be in the prime zone for very unstable and dangerous conditions with a potential for a severe weather outbreak from this afternoon into evening hours.

Looking over the satellite image this Wednesday morning, a well-defined upper trough was located over the northwestern United States. This large-scale feature is forecast to translate into eastern Montana and Wyoming by Wednesday night with a diffluent high-level flow expected to spread across the northern High Plains region during the afternoon. 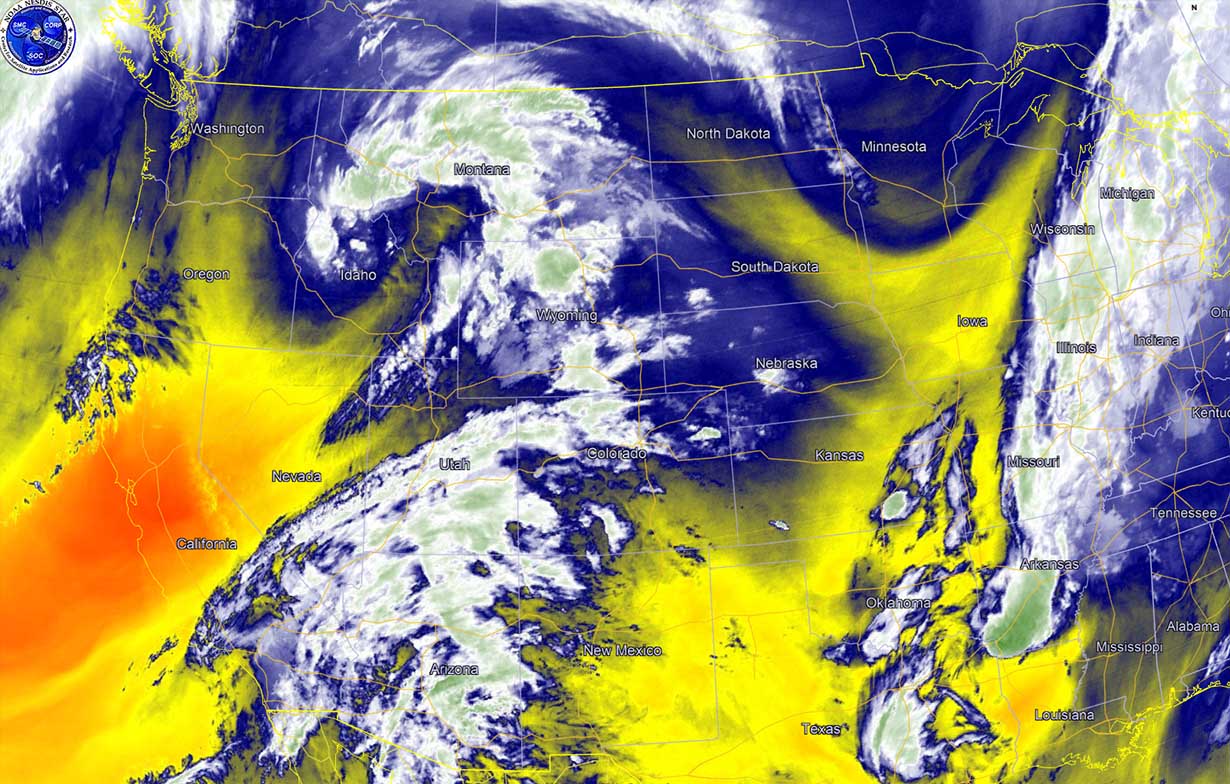 In response to the upper-level flow, a surface low should develop over southern Wyoming in the afternoon, then settle southeast along a frontal zone draped across the central Plains. Favorable low-level winds trajectories across Kansas and Nebraska will deliver higher boundary layer moisture towards the Nebraska Panhandle near the peak time heating.

Above: High boundary layer moisture advection across the Great Plains

Soon after, isolated supercells will likely initiate across parts of eastern Wyoming under the large-scale forcing aloft. With forecast sounding exhibit very high convective instability (3000 J/kg of MLCAPE) and the deep-layer bulk shear on the order of 40 knots, the environmental conditions appear very favorable for discrete supercells to rapidly develop.

With time through the afternoon hours, numerous supercell storms should grow upscale as they mature along/south of the aforementioned frontal zone across the central Plains.

Very large hail will likely develop in this early storm activity, then a favorable SRH (storm-relative helicity) values hint that tornadoes will be a threat until storms merge into a larger system. Those could lead to a potentially significant MCS (mesoscale convective system) downstream across southern Nebraska and northern Kansas.

The HRRR model guidance of simulated reflectivity through the evening hours hints at the robust thunderstorm activity across parts of Nebraska and Kansas, with intense discrete supercells possible. While storms will then continue growing upscale and merge into an MCS towards the evening and continue east through night hours. 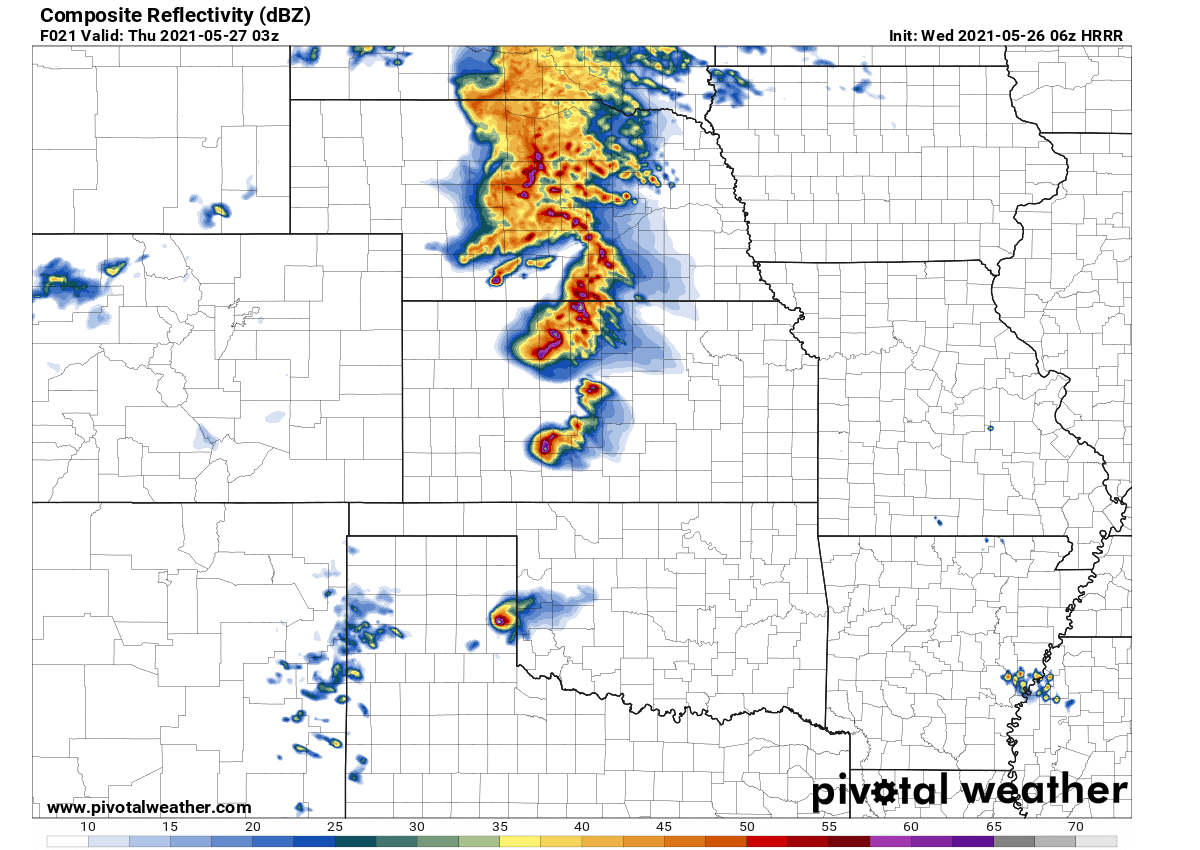 Above: Simulated reflectivity for Central Plains as per HRRR model

The attached chart below is the sounding diagram across northern Kansas for this evening. The vertical wind profile indicates the veering winds with height, with a textbook curvature of the hodograph (upper right), favoring organized rotating storms. High instability in the hail-growth region also hints at an enhanced potential for severe hail.

If an intense MCS does evolve, very damaging winds with locally near hurricane-force gusts, could develop along the leading edge of this cluster as it surges east-southeast along with the nose of a pronounced low-level jet from the south. 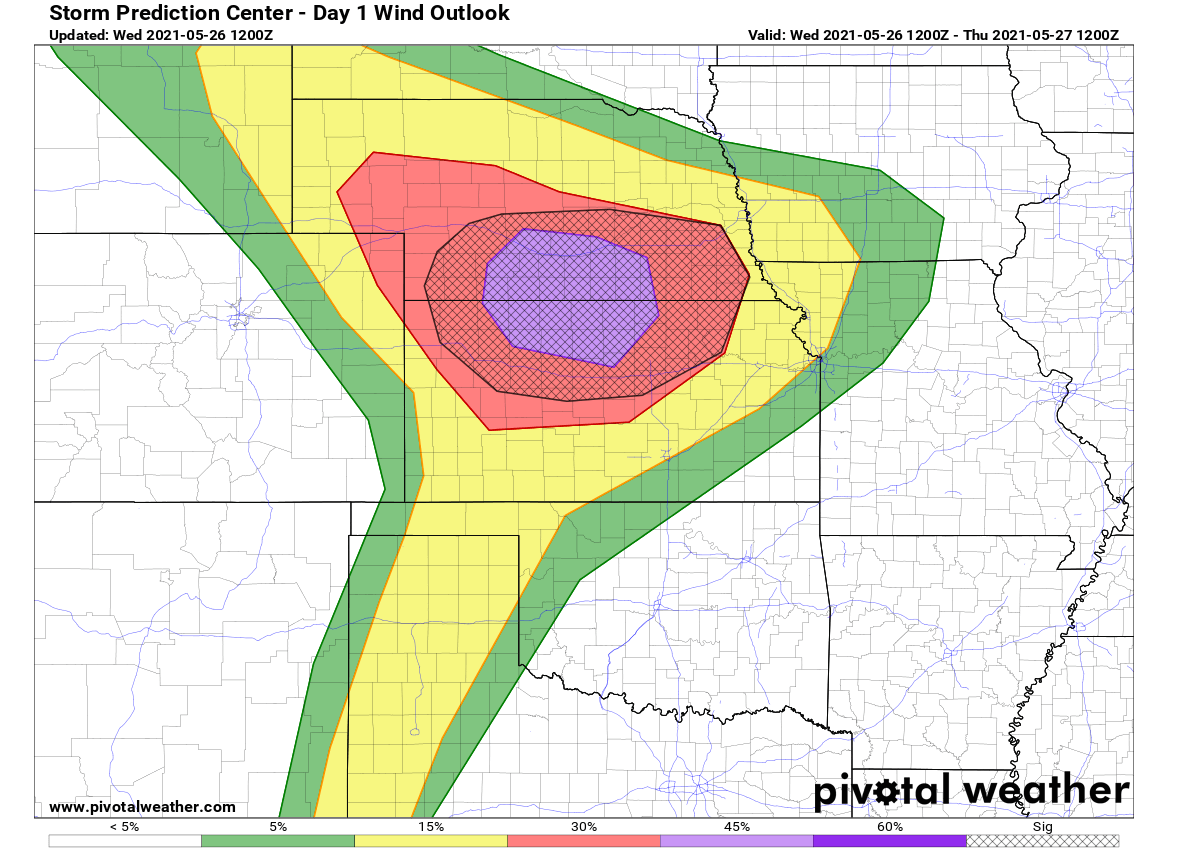 Further south across the southern Plains, isolated severe thunderstorms will also develop across the High Plains into west Texas. Strong afternoon heating will once again allow surface parcels to reach their convective temperatures by late afternoon. A combination with modest southwesterly flow aloft will support supercells, with large hail/wind being the greatest risks along the southern dryline.

An enhanced (ENH) risk has been issued by the Storm Prediction Center (SPC) from the eastern Texas Panhandle across Oklahoma to Missouri for Thursday. It might be upgraded to moderate (MDT) risk in the future updates of the outlook.

Scattered severe thunderstorms are likely on Thursday and Thursday night from parts of the southern Great Plains into the Ozarks and middle Mississippi Valley. Very large hail, significant severe wind gusts, and several tornadoes are all well possible. 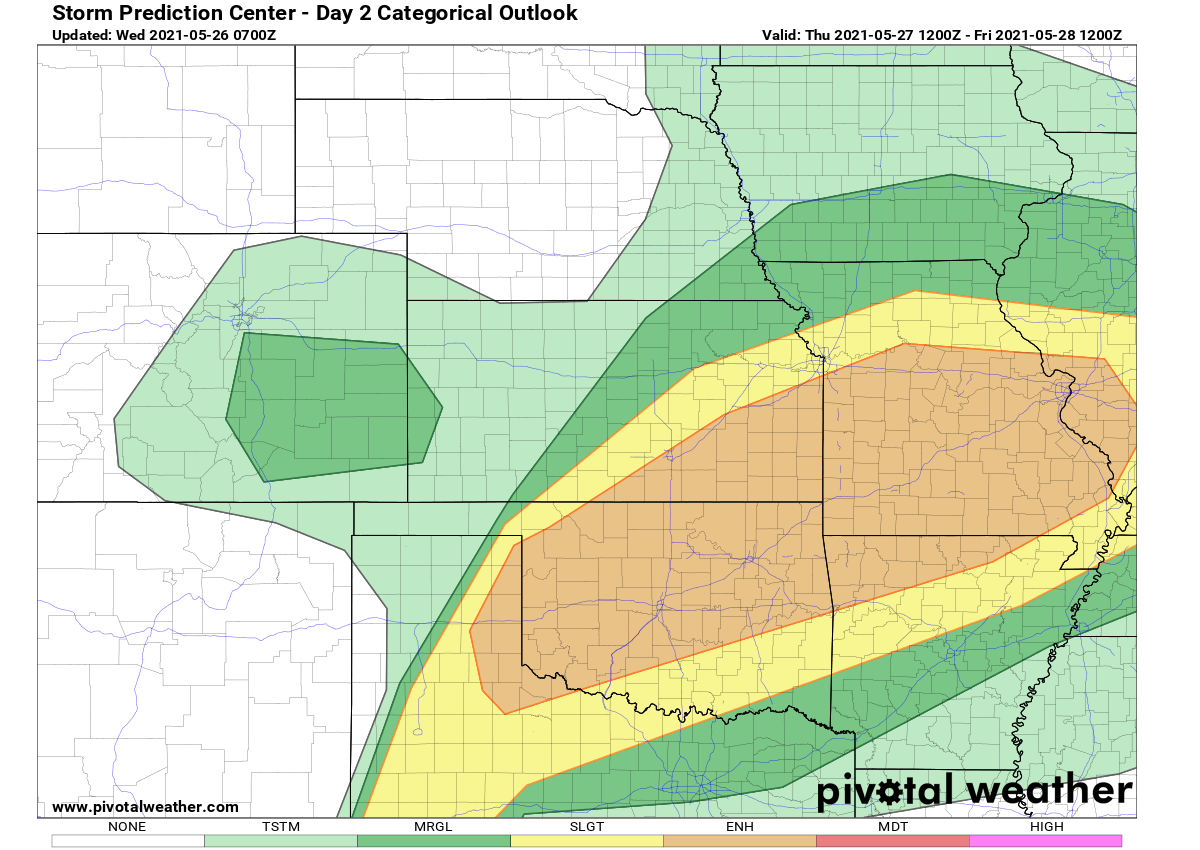 First, it seems likely the remnants of the mesoscale convective system from Wednesday central Plains’ nighttime activity, probably aided by an MCV (mesoscale convective vortex), will continue during the day across Missouri towards Illinois. It could spark damaging gusts and perhaps a localized risk for significant wind damage/weak tornado may develop.

The main concern then comes again in the afternoon and evening hours further south, across Kansas, Oklahoma, parts of Texas into the Ozarks. Very high low-level moisture will result in very to extremely unstable (3000-4500 J/kg of MLCAPE) air mass by the mid-afternoon hours. 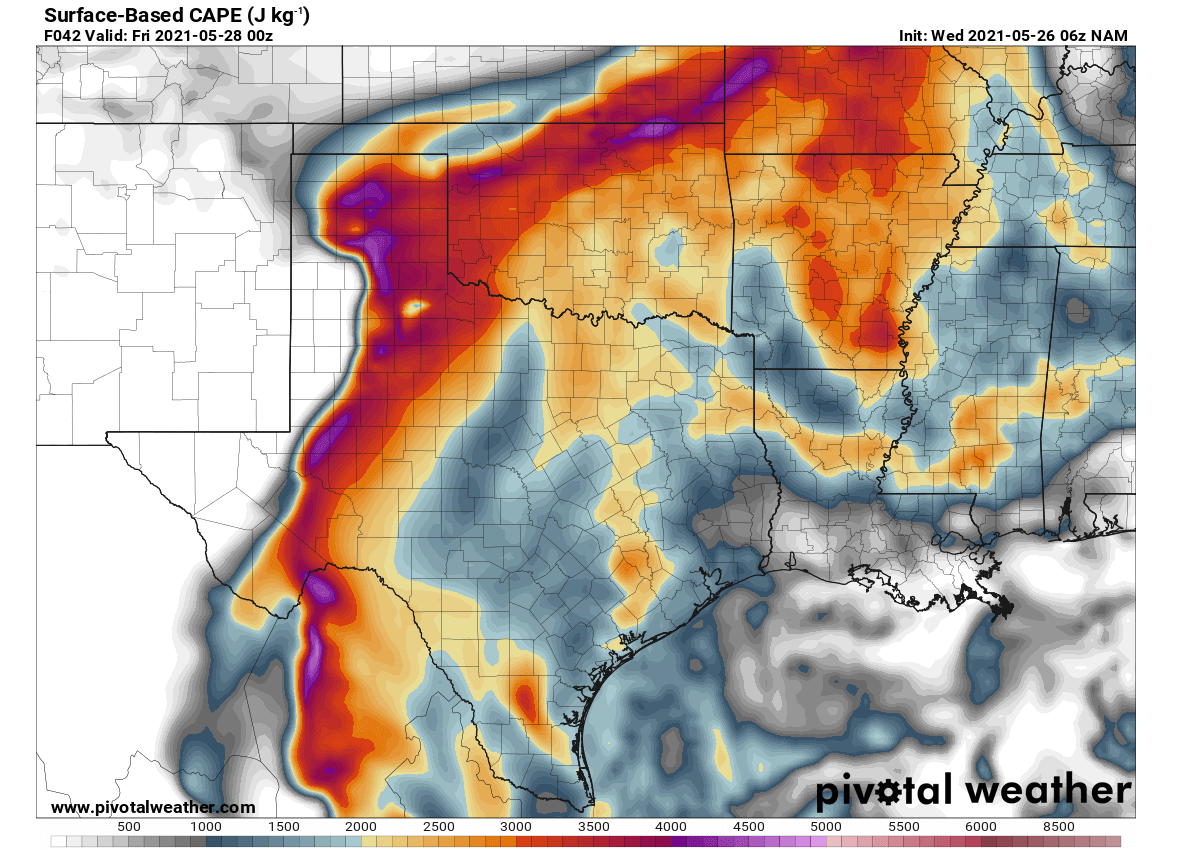 Above: Extreme instability across the warm sector from the Texas Panhandle to Oklahoma

The strong heating near the front and outflow boundary from the overnight activity will likely be preferable locations for thunderstorm development by mid-late afternoon. Forecast soundings show ample deep-layer shear favoring organized storms, including intense supercells with high instability in the hail-growth region, that is between the -10 to -30 °C layer.

The HRRR model guidance of simulated reflectivity through the Thursday evening hours hints at the scattered to widespread thunderstorm activity from the eastern Texas Panhandle across parts of Oklahoma into north-central Missouri and western Illinois.

Above: Simulated reflectivity for Southern Plains as per HRRR model

Intense discrete supercells with very large to giant hail will be possible over Texas and Oklahoma. Storms will continue growing upscale and merge into a larger system or two (MCS) through the evening and night hours.

As we can see from the attached sounding diagram chart for the eastern Texas Panhandle below, the hail-growth region depicts a very high available potential energy, a textbook example for strongly enhanced severe hail threat. This layer has an important role when it comes to growing hailstones. 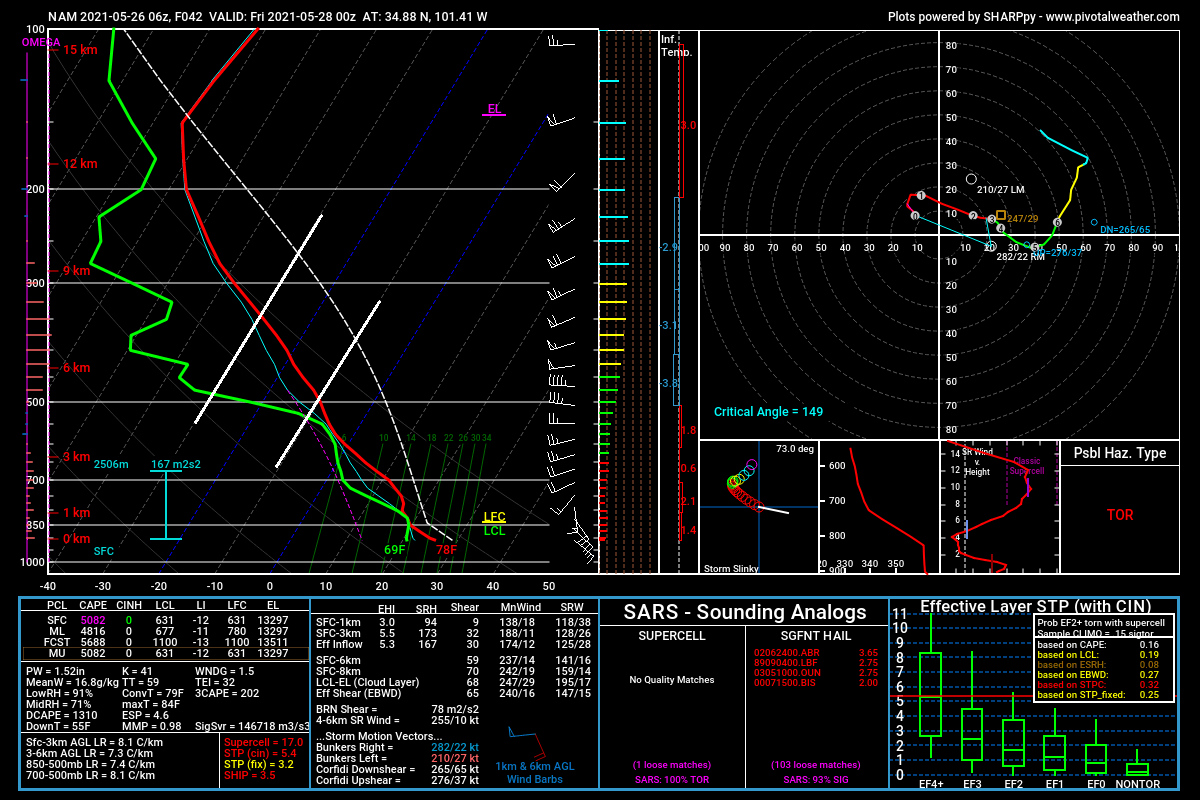 Therefore, very large to giant hail is possible with the early discrete supercell activity. Some tornado risk will also develop near a potential outflow boundary where SRH (storm-relative helicity) is maximized during the early evening over northeast Oklahoma into southeast Kansas.

Storms could grow upscale and merge into one or more surging bows (a bow echo) that may occur during the evening and persist overnight. Significant severe straight-line wind gusts may accompany the stronger supercell to the squall line transition process with embedded mesovortices within a moist low-level airmass centered over central/eastern Oklahoma.

Further south, along the Texas dryline, strong heating will contribute to very steep low-level lapse rates beneath an elevated mixed layer. Scattered thunderstorms should develop during the late afternoon into the evening, including a few supercells and clusters with hail/wind the primary severe risks.