Last year, 2020, the global average surface temperature was the warmest on record. But it could get even warmer until 2025. According to the latest study by the World Meteorological Organization (WMO), Earth’s average temperature will likely reach its tipping point in climate change. The anomaly of +1.5 °C is likely in the next 5 years.

2020 had the globally averaged temperature of 1.02 °C (1.84 °F) warmer than the baseline 1951-1980 mean, according to scientists at NASA’s Goddard Institute for Space Studies (GISS) in New York. 2020 edged out 2016 by a very small amount, within the margin of error of the analysis, making the years effectively tied for the warmest year on record.

But now, there is a 90 % likelihood that at least one of the next five years, including 2021, becoming the warmest on record. The high-latitude regions and the Sahel* are likely to be wetter than normal, as well tropical cyclone activity is very likely to be increased compared to the recent past (the period between 1981 and 2010).

*Note: The Sahel is the ecoclimatic and biogeographic realm of transition in Africa between the Sahara to the north and the Sudanian savanna to the south. Having a semi-arid climate, it stretches across the south-central latitudes of Northern Africa between the Atlantic Ocean and the Red Sea. 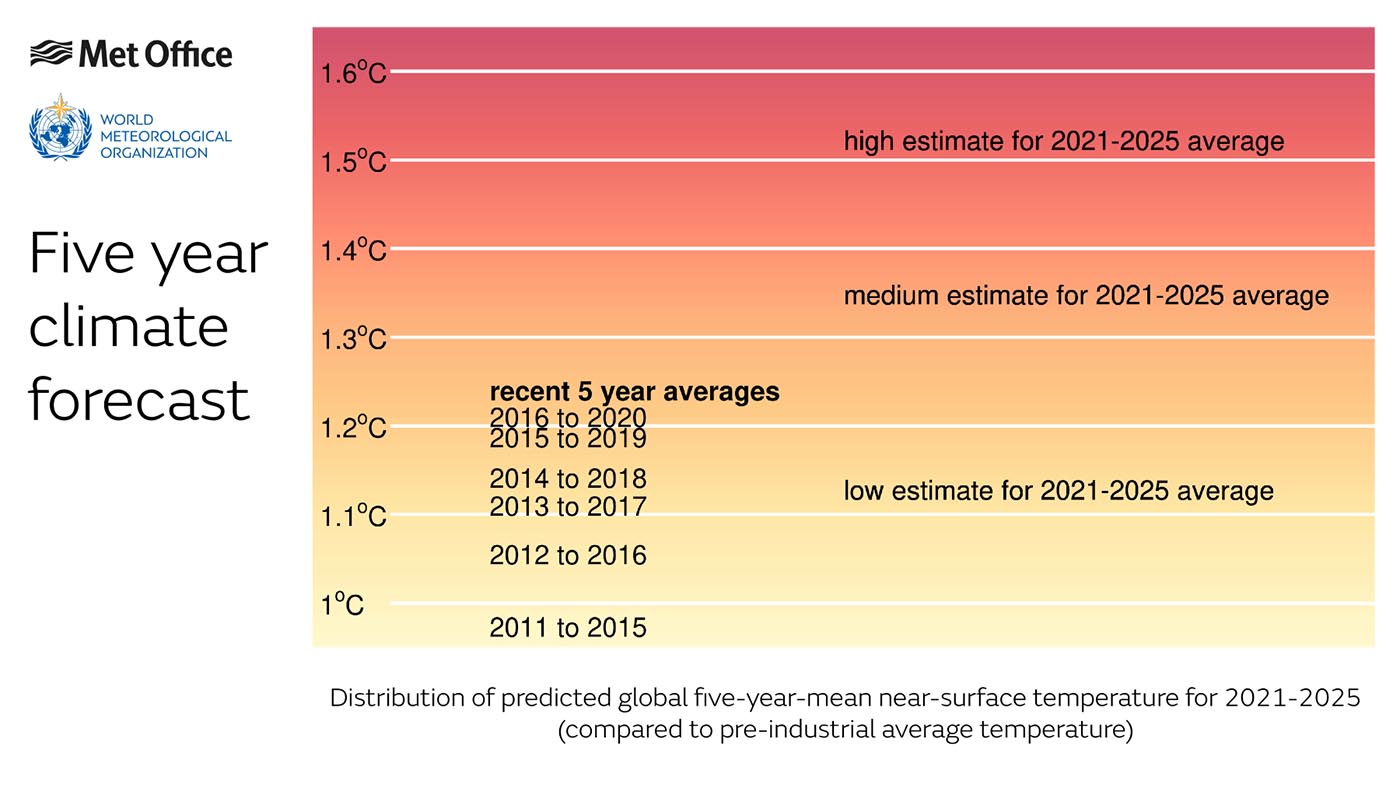 The UN Intergovernmental Panel on Climate Change (IPCC) has identified the 1.5 °C markers as a tipping point after the hazardous weather as the extreme drought, wildfires, floods with more torrential rain and intense tropical systems will significantly increase.

Above video: Global warming between 1880 and 2020. The Earth’s global average surface temperature in the last year (2020) tied with 2016 as the warmest year on record, according to an analysis by NASA. This video is shown in Celsius degrees.

STRONG ANOMALIES IN THE RECENT YEARS 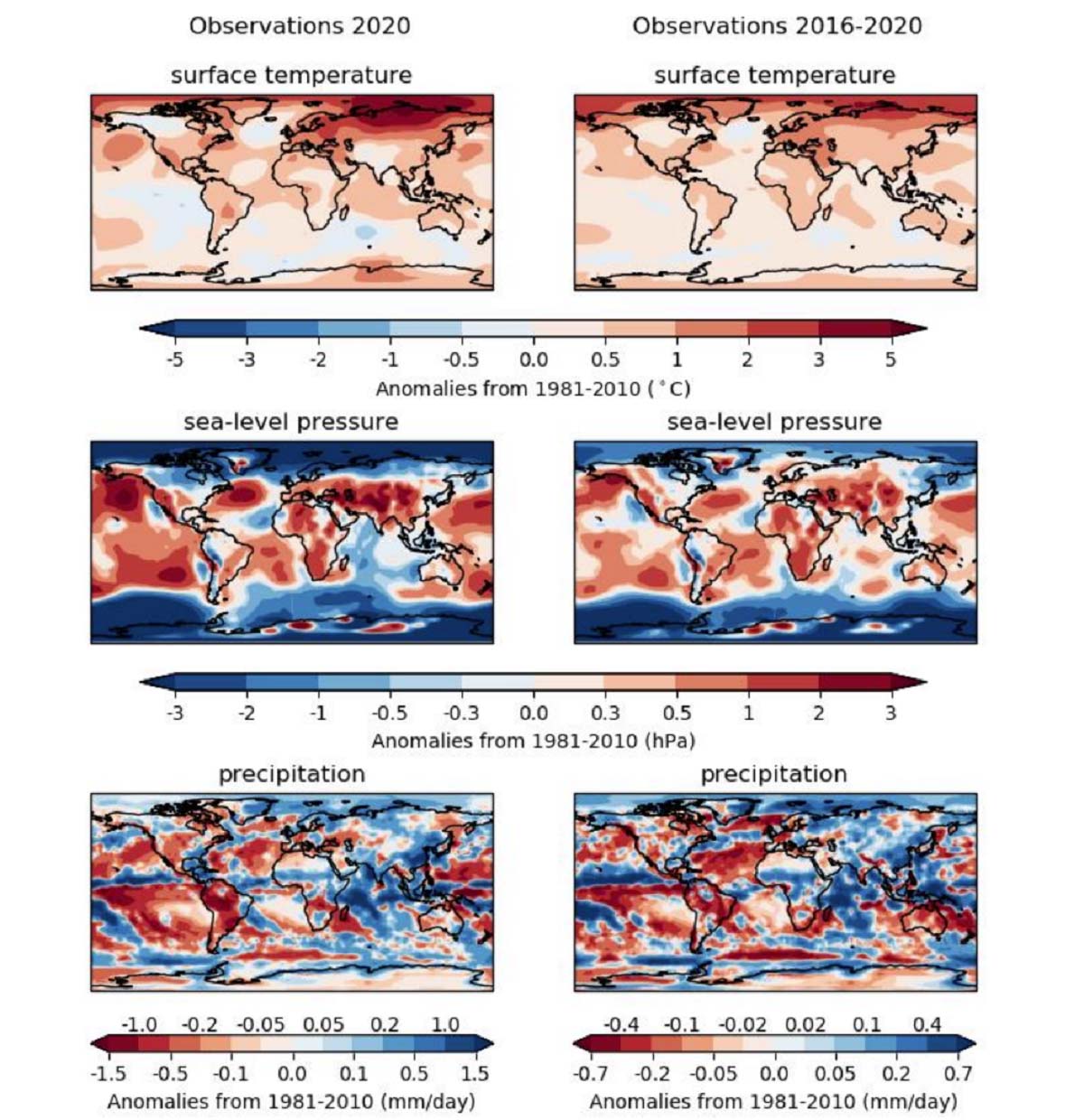 Above: The climate over the last year and last five years as anomalies with respect to the recent period 1981-2010.

In the last five years, sea-level pressure was anomalously low in both polar regions, with the strongest negative anomalies over Antarctica. Hence both the Arctic and Antarctic Oscillations have been positive on average.

Parts of Eurasia, the eastern USA, and the African Sahel have been anomalously wet, with southern Africa, eastern Australia, north-east Brazil, and western Europe anomalously dry in the period between 2016 and 2020.

“This study is yet another wake-up call that the world needs to fast-track commitments to slash greenhouse gas emissions and achieve carbon neutrality,” said Prof. Taalas.

Last year was one of the three warmest years on record, with the global average temperature well above the pre-industrial baseline, according to the WMO’s report released in April. The report highlighted the acceleration in climate change indicators like rising sea levels, melting sea ice, and extreme weather. As well as worsening impacts on socio-economic development.

The chart below is showing the change in global surface temperature relative to the 1951-1980 period average temperatures. Nineteen of the warmest years have occurred since 2000, with the exception of 1998. The year 2020 tied with 2016 for the warmest year on record since record-keeping began in 1880. Image is provided by NASA/GISS.

And the chance of temporarily reaching 1.5°C above average has roughly doubled compared to the predictions made last year. The main reason behind it is the use of an improved temperature dataset to estimate the baseline rather than sudden changes in climate indicators.

The head of seasonal to decadal prediction at the Met Office, professor Adam Scaife, has commented on the update: “Assessing the increase in global temperature in the context of climate change refers to the long-term global average temperature, not to the averages for individual years or months. Nevertheless, a temporary exceedance of the 1.5-degree level may already be seen in the next few years.”

SUMMARY POINTS OF THE STUDY 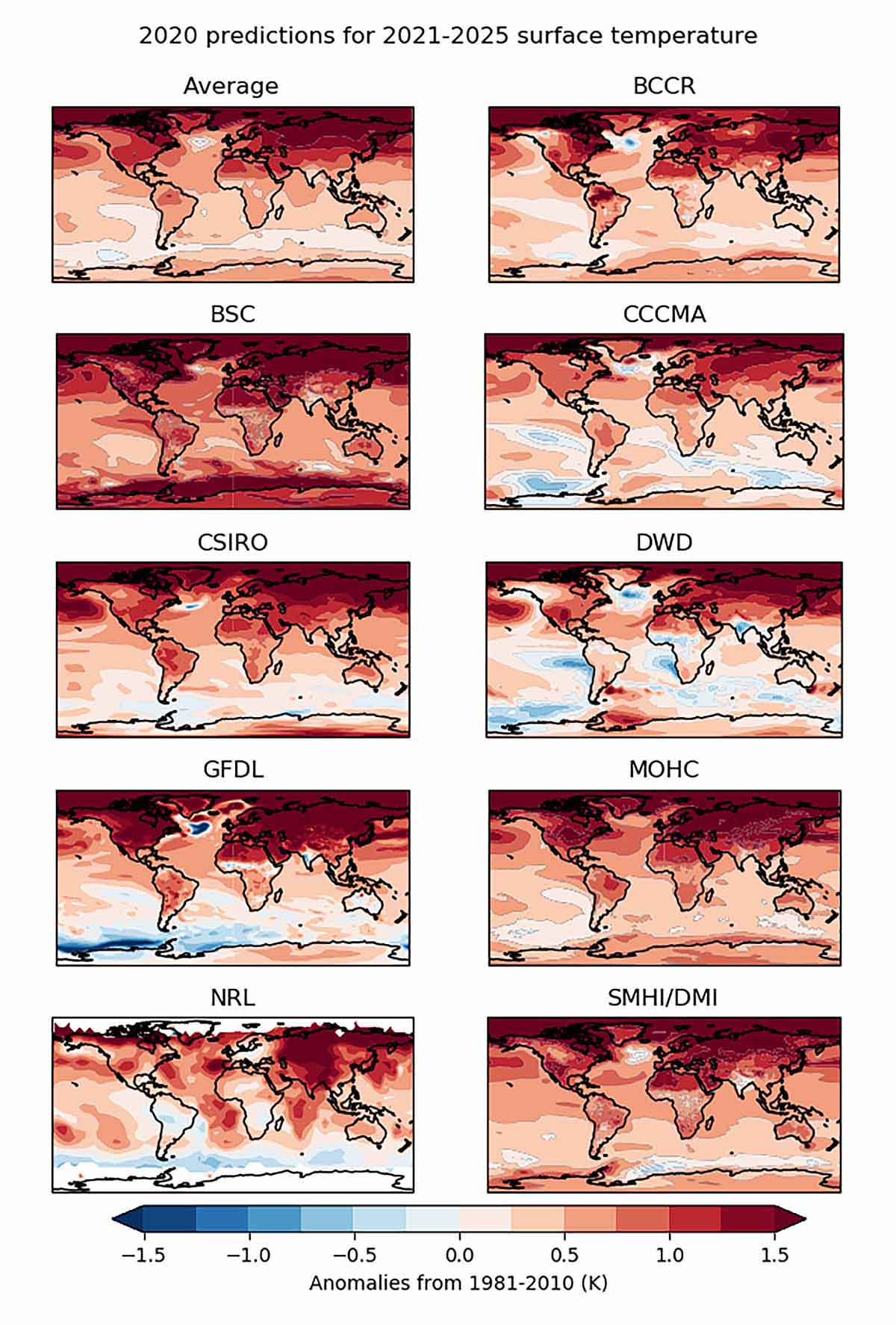 Above: Next 5-year predictions by various climate change groups

You can read more details in the study below: