Imagine a melon-sized chunk of ice falling out of the sky? Punching a hole in your car windshield? Your roof? Breaking bone? In this article, we take a look over the biggest, heaviest, and deadliest hail records on Earth.

Hail is one of the biggest hazards with severe thunderstorms – while it is usually small and relatively harmless, it may grow to tennis ball-sized or even larger. It may cause severe damage, injuries, and in extreme cases even death.

Hail or hailstone forms as supercooled water droplets within a thunderstorm updraft begin freezing onto a condensation nucleus. The supercooled droplets have a temperature below freezing (0 °C or 32 °F), but still in a liquid state.

As they come into contact with the growing hailstone, they freeze onto it, making it grow larger. The growing hailstone is kept in the air by the storm’s updraft until it grows too big and heavy for the upward wind to keep it aloft. 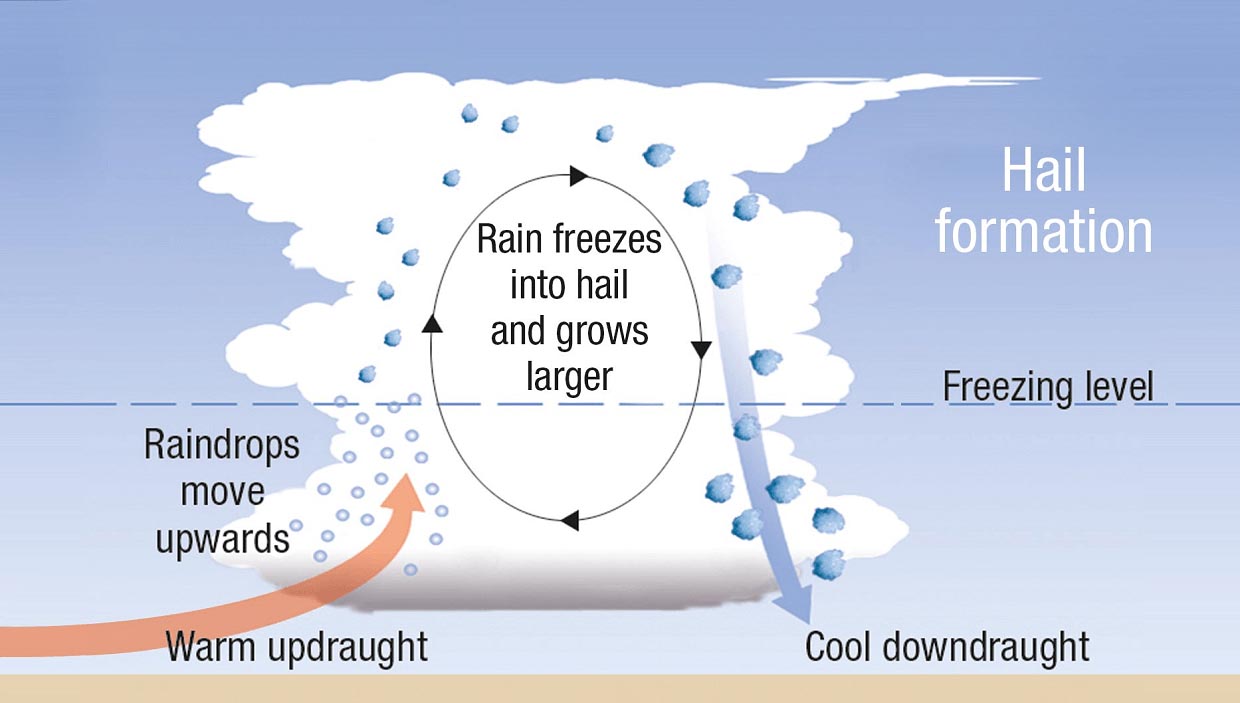 How hail form. Graphics by Bureau of Meteorology

The hailstone may make a single round within the updraft of the storm, but often it makes several rounds within the updraft. Each round results in the formation of a new layer of ice around the chunk of ice, producing a concentric onion-like structure.

Some hailstones form and grow by many smaller hailstones sticking and freezing together into a large hailstone – such form is called an agglomerate. The largest hailstones sometimes even form long icy horns or spikes!

The most severe hailstorms and largest hail are usually associated with supercell thunderstorms. It takes very high to extreme instability, strong wind shear, and dry mid-levels for very large hail to form.

But just how big and heavy can hailstones grow? Below are some of the records for the largest, the heaviest, and the deadliest hailstorms around the world.

On the 8th of February, 2018, gigantic chunks of ice were falling down from the sky in Villa Carlos Paz, a resort city west of Córdoba, Argentina. A supercell thunderstorm bombarded the city center.

Researchers investigating the 2018 storm found that one of the hailstones had a diameter between 7.4 inches (18.8 cm) and 9.3 inches (23.6 cm) across. This diameter may approach or even exceed the official world record for the biggest hail – recorded in Vivian, South Dakota (see below). 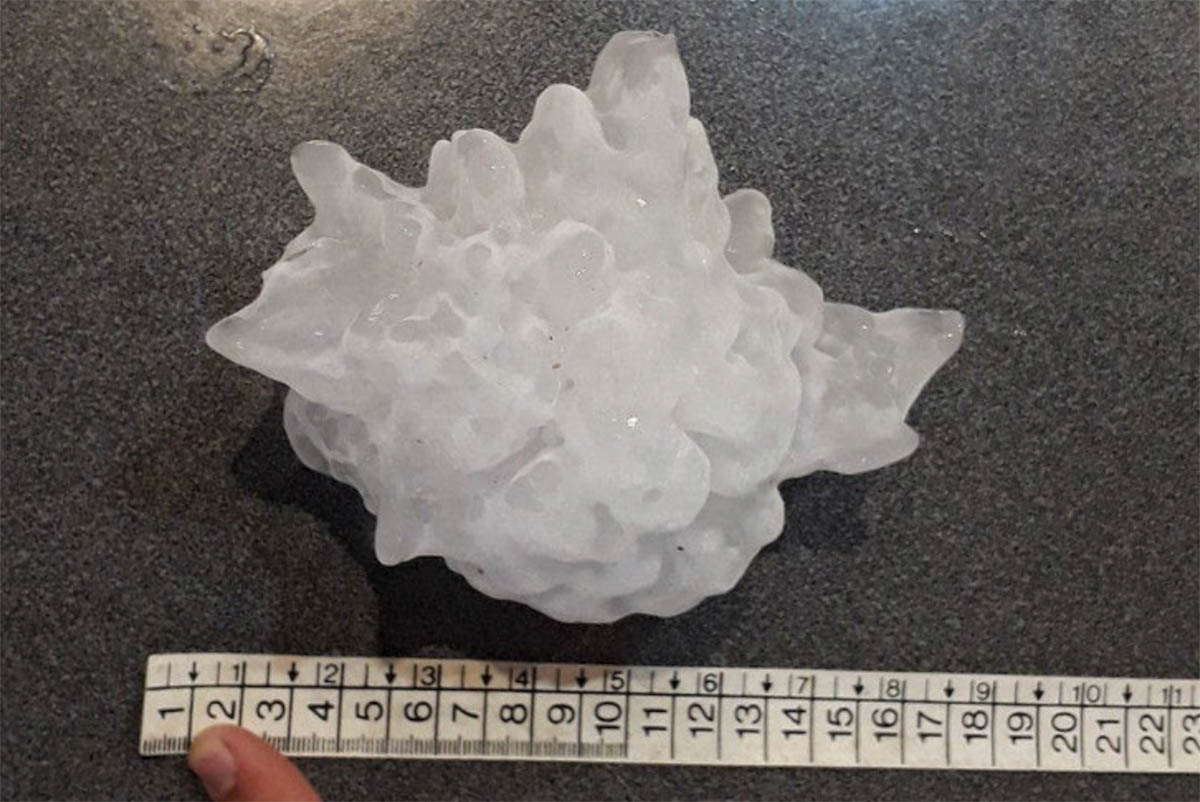 The hailstones were so large that scientists suggested a new category to describe them — a gargantuan hail.

Based on the official reports, this so-called ‘gargantuan’ hailstone that fell in Argentina may beat the actual world record, according to researchers. But these reports have not been officially confirmed yet.

According to the National Oceanic and Atmospheric Administration (NOAA), the official world record for the largest hailstone belongs to an 8-inch (20.3 cm) hailstones that fell near Vivian, South Dakota, the United States in 2010.

On July 23rd, 2010 an 8.0 inches (20.3 cm) hailstone was recorded in the severe hailstorm produced by the Vivian, South Dakota severe supercell. The hailstone was found by Mr. Lee Scott, and it had the size of a volleyball! 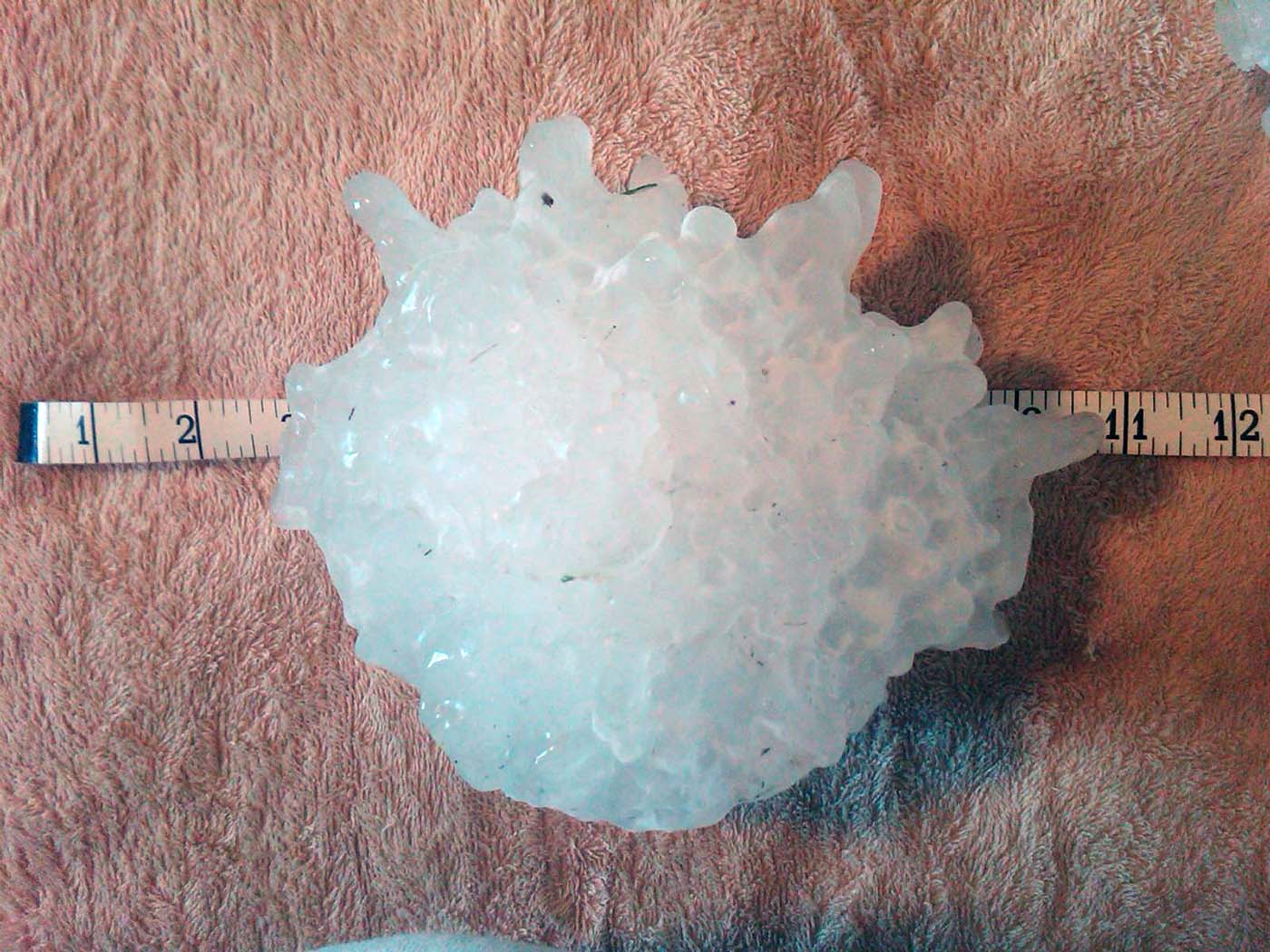 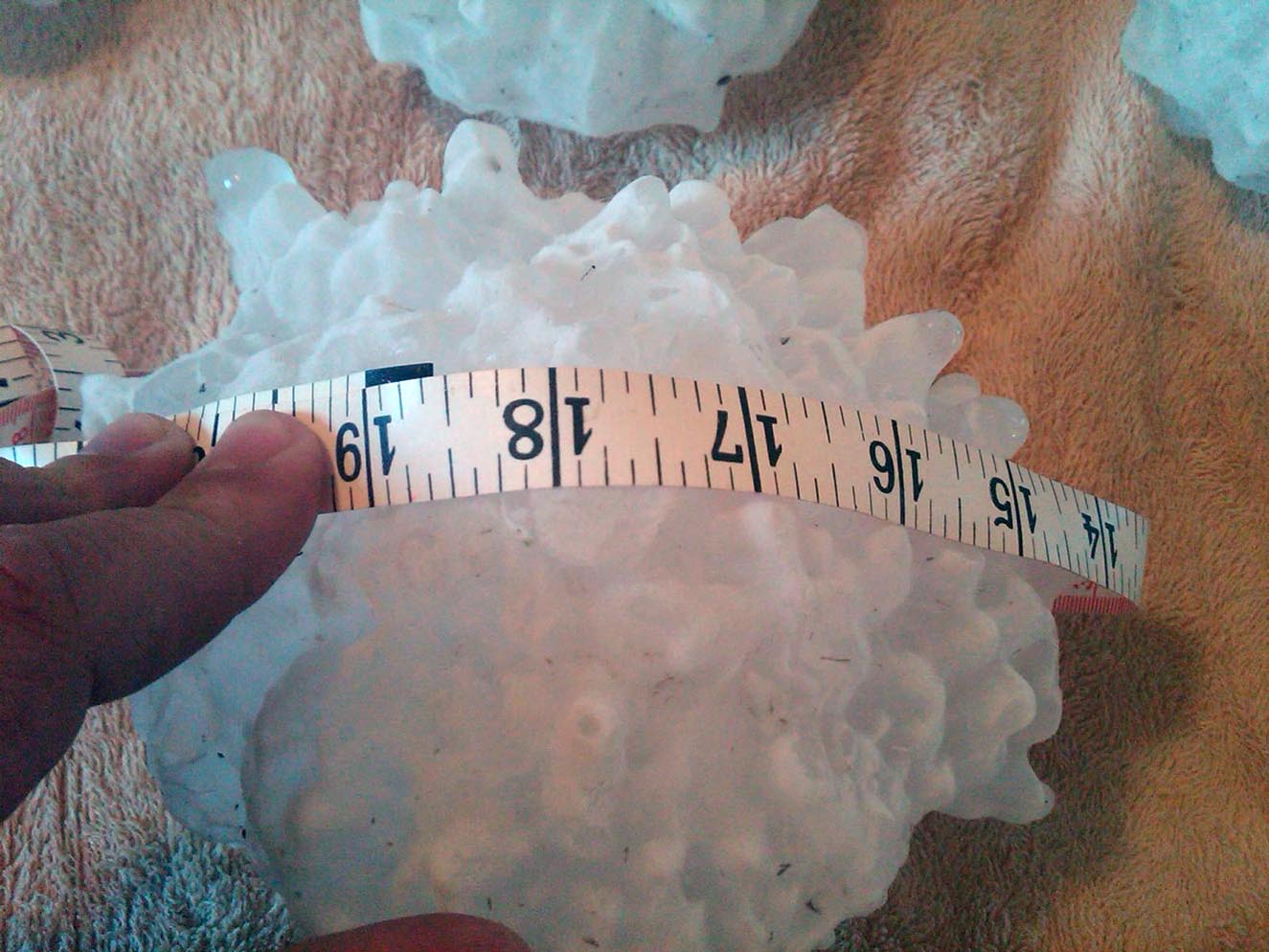 The capital of Libya, Tripoli has been hit by a severe supercell storm on Oct 27th, 2020. The storm produced an exceptionally large, *giant* hail, with an estimated diameter of 17-18 cm (6.5-7 inches). The event was associated with an upper-level trough moving across the Mediterranean in the late evening hours. 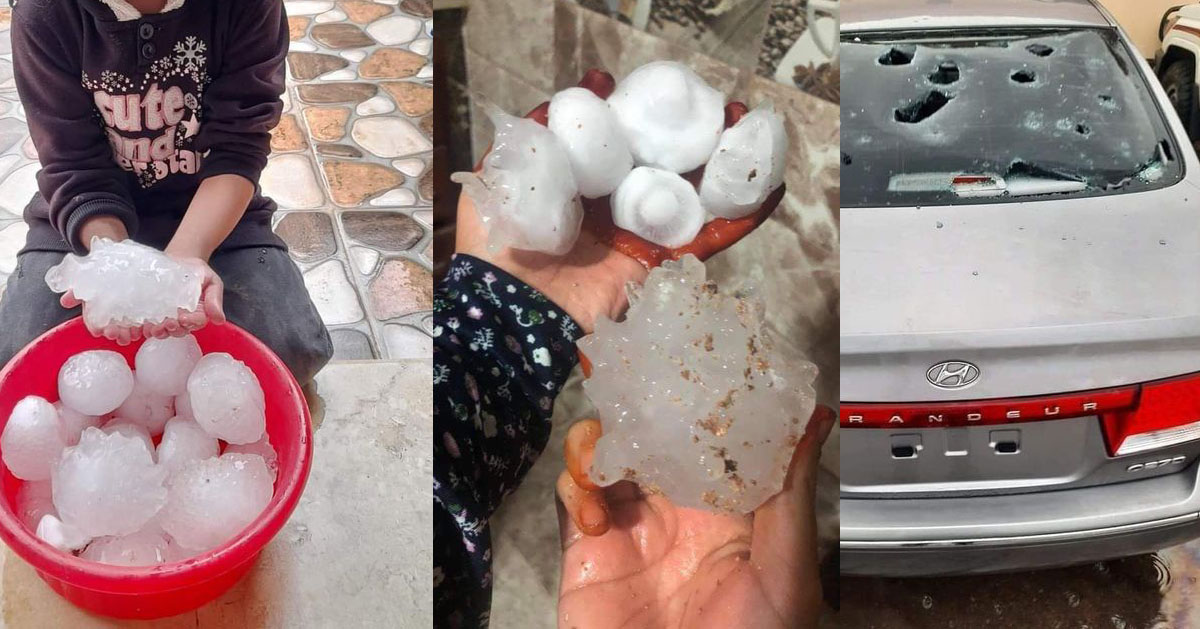 Local reports said the sudden storm resulted in severe damage to properties as many trees were knocked down and hailstones struck several vehicles. The Libyan Port and Shipping Authority confirmed that the port of Tripoli sustained damage, including fallen containers in the squares and port basin.

Here is another photo of a person holding these giant hailstones which seem to be easily between 16 and 18 cm (6-7 inches) in diameter. The rugged nature of this stone makes it very difficult to estimate its mass or equivalent spherical diameter. 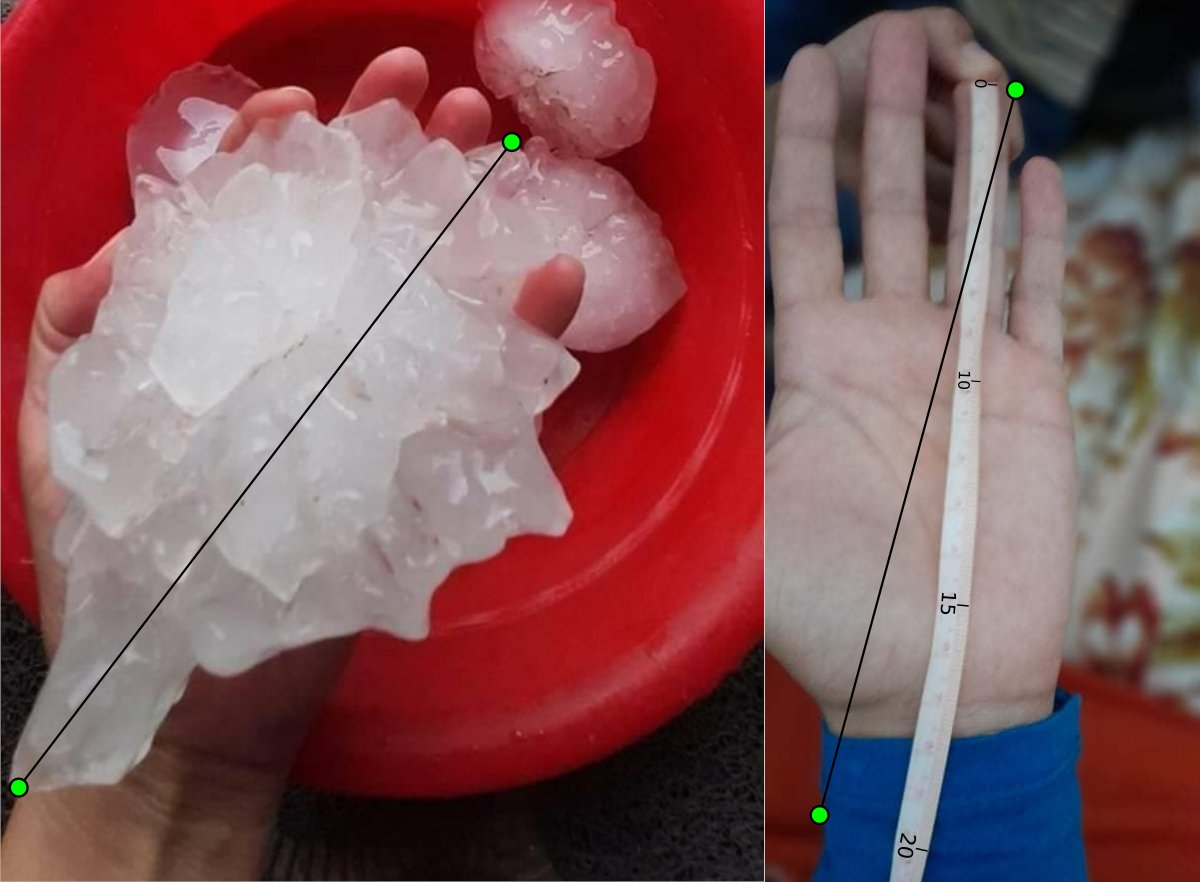 There are other, unconfirmed reports of similarly sized hail found. For example, Ponca City, Oklahoma is reported to have been hit by up to 8 inches (20 cm) hailstones on April 17th, 1935.

In Europe, the largest reported hailstone diameters in recent years are 15 cm on June 20th, 2016 in Sânandrei, western Romania, and 14.1 cm on August 6th, 2013 in Undingen in southwestern Germany. 14 cm hailstones were also reported in Stari Trg ob Kolpi, Slovenia on June 11th, 2019. 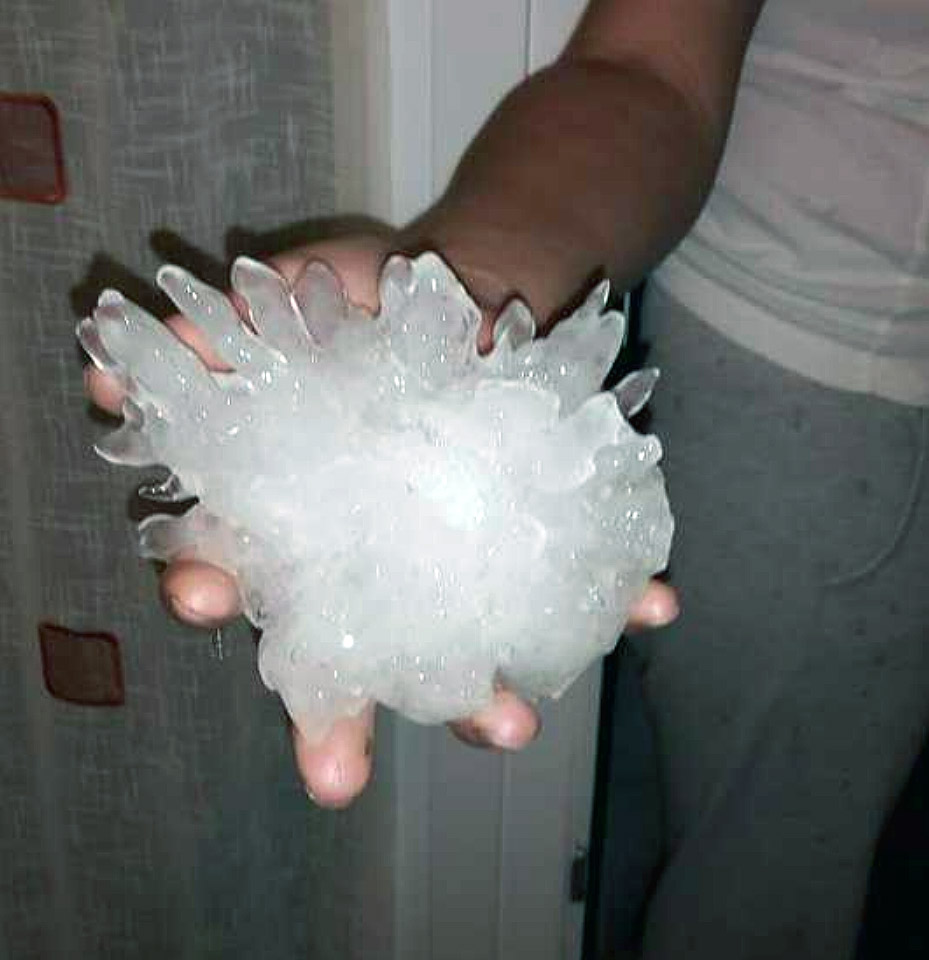 In 2020, one giant hail event was also reported in Slovenia, the city of Domzale was hit by 10+ cm hailstones: Destructive hailstorm in central Slovenia, July 29th – the first 10+ cm *giant* hail event in Europe of summer 2020.

An 18.75 inches (47.6 cm) circumference hailstone was recorded on June 22nd, 2003 on a severe thunderstorm that hit Aurora, Nebraska, United States. The hailstone was 7.0 inches (17.8 cm) in diameter, but no weight was officially recorded as the hailstone partially broke off as it hit the roof of a house.

It is noteworthy, that the hail that hit Hamilton County (including Aurora) produced impact pits on the ground up to 14.1 inches (36 cm) across.

NWS Hastings staff measuring the diameter and circumference of the Aurora, Nebraska hailstone. Again, the ruler is in inches! Photo: NWS Hastings.

The heaviest hailstone that has been authenticated by official authorities fell during a severe hailstorm in the Gopalganj district of Bangladesh on April 14th, 1986. It weighed in at 2.25 pounds (1.0 kg).

In Europe, the record is held by a large, 2.1 pounds (0.97 kg) hailstone that fell in Strasbourg, France on August 11, 1958 – unfortunately, no dimensions were recorded.

BIGGEST HAIL ACCUMULATION ON THE GROUND EVER RECORDED

A persistent, virtually stationary hailstorm hit Seldon, Kansas on June 3, 1959. It produced a blanket of hail up to 18 inches (45 cm) thick over an area of (54 sq miles) 140 square kilometers. 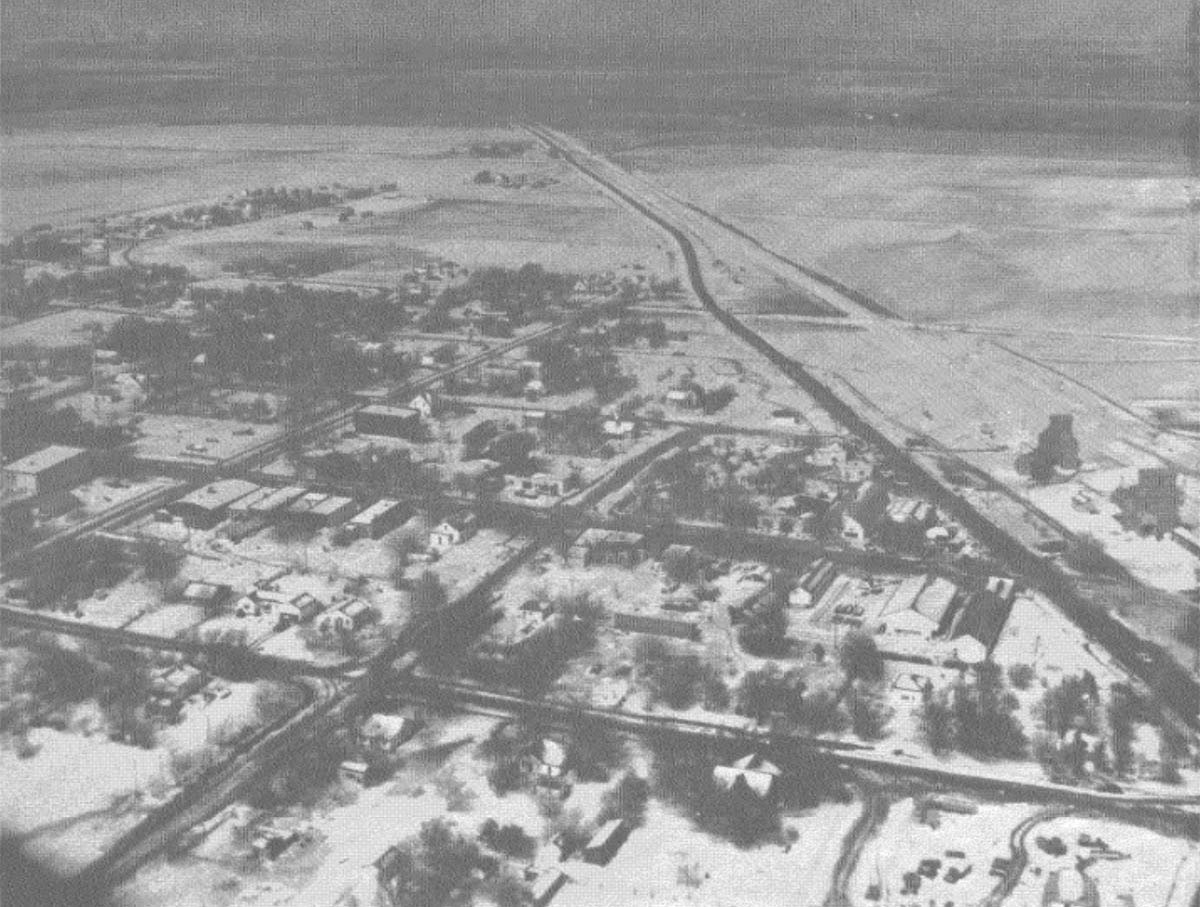 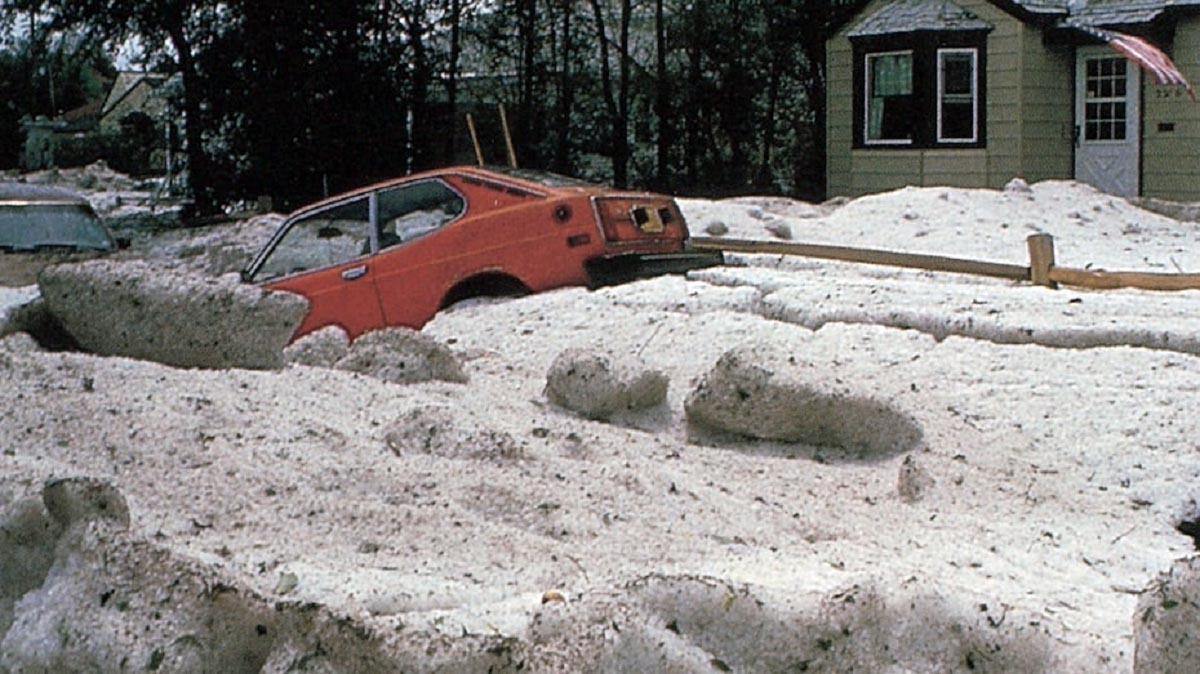 Hail drifted into huge heaps in a low-lying area after floodwaters washed it, Michael Mee (FEMA).

On April 30th, 1888 the deadliest hailstorm in the modern history hit Moradabad and Beheri districts, the state of Uttar Pradesh, India. It caused 246 fatalities, 1600 cattle and sheep with hailstones as large as “goose eggs, oranges, and cricket balls”, according to World Meteorological Organization.

The hailstones were reportedly as big as oranges and in some places accumulated to up to 2 feet in height.

VIDEO EXAMPLE OF SEVERE HAILSTORMS AROUND THE WORLD

Check some more interesting articles on the hail records: