It has been the slowest start of the severe weather and tornado counts across the United States in more than 15 years, thanks to the very active winter period since January. But the pattern change will soon bring much warmer weather across the country, and increase chances for severe weather this coming week. A severe weather outbreak could follow over the weekend.

The number of cold weather outbreaks across the country through February was so high and strong, that one would almost lose their count. But it did help to reduce the amount of severe weather and storms for the South. The first two months of 2021 brought the slowest start of the convective season in more than 15 years.

What we have seen in recent years, the severe weather activity has kicked-off earlier than usual. This year has been an exception so far, but the changing pattern these days will bring *much* warmer weather soon. And this typically means also an increase in severe storms, including tornadoes.

The pattern seems to become more robust over the weekend, with increasing potential for a severe weather outbreak as well.

After all, knowing we are still under the effect of moderate La Nina, the upcoming severe weather season could lead to above-average tornado events this spring.

As of March 1st this year there were 24 tornadoes reported across the United States. Including two destructive tornadoes with 4 fatalities (one in Alabama on Jan 25th and three in North Carolina on Feb 15th). This is a very slow start for the tornado numbers actually, just about 20 % (percent) of a typical ~116 tornado reports during the first two months of the year, January and February together. 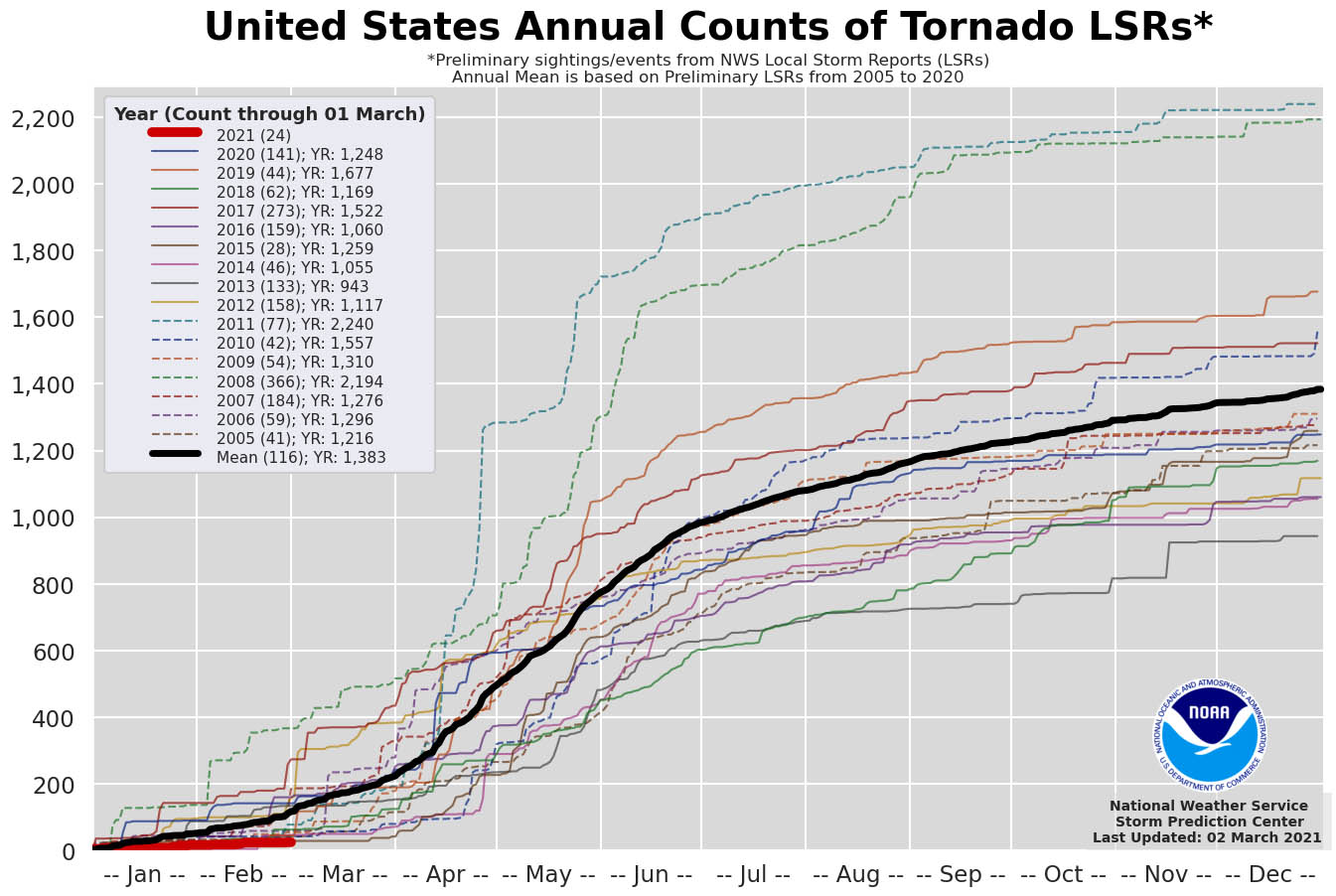 This slow start brings the lowest number of tornado reports in the last 16 years as we can see from the chart above. It is not a big surprise actually, as the rather harsh winter months had consecutive cold outbreaks since the Polar Vortex collapse back in early January.

But thanks to the below-average sea temperature across the tropical central Pacific waters – known as La Nina, the spring months could trigger above-average severe weather and a significant tornado activity this year. This changing Pacific water temperature, known as ENSO (El Niño–Southern Oscillation) is a natural cycle, known as one of the main drivers for the weather dynamics around the Earth.

Based on the recent 30-year average, March has the highest average of tornadoes across the South. Most of them occur in Texas – 11 tornado reports. While Kansas, Oklahoma, states along the Mississippi Valley, and the Southeast US typically see 4-6 tornado reports on average during the month of March. 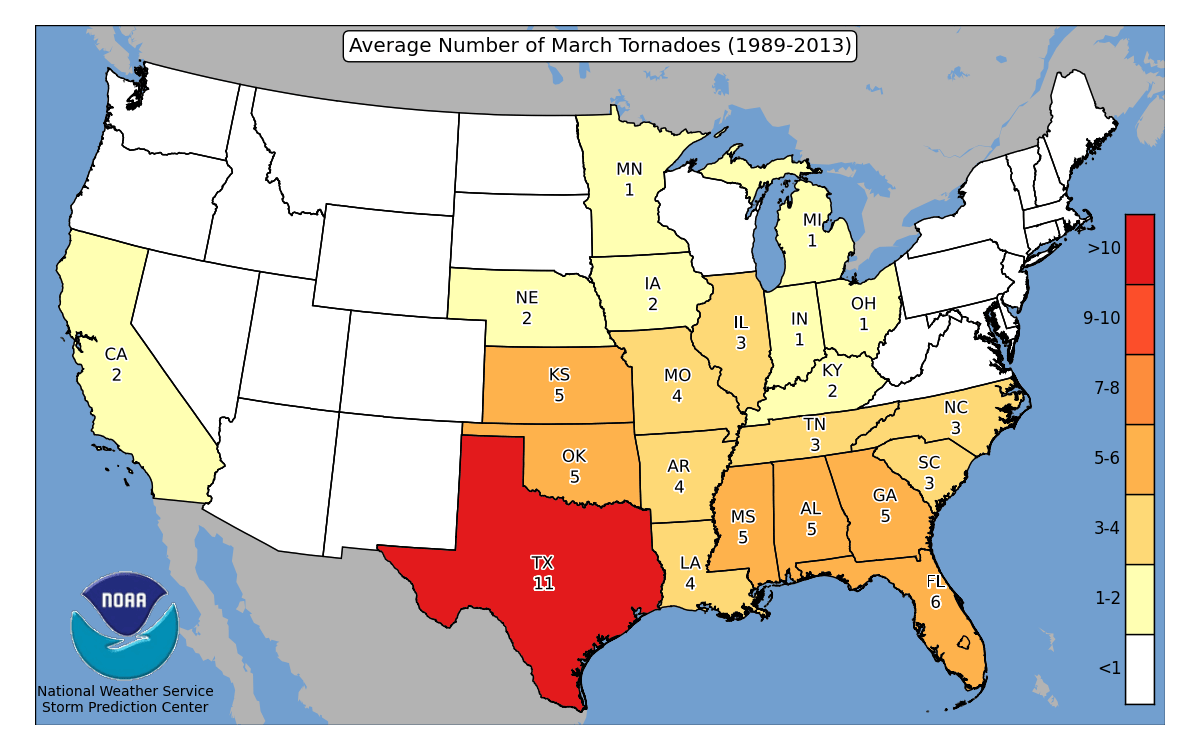 These numbers are not surprising as the warming up starts closer to the Gulf of Mexico first, so when a favorable pattern and frontal systems dig into the southern region, they could trigger severe storms and form tornadoes.

The severe weather storm season, however, lasts from March through August across the US, with the peak activity from mid-April through May into most of June while the activity gradually spreads further north.

GULF OF MEXICO IS VERY WARM

Severe storms fuel from the warm and moist air, which is typically coming from the much warmer tropical region. So it is an important source of the ingredients needed for storms to become strong or severe. The above-normal sea temperatures over the Gulf of Mexico play a very important role each year.

Lately, much warmer than normal temperatures are being observed over the Gulf. Especially across the eastern parts, a well-known Loop Current, where water temperatures are very warm. The Loop Current is a warm ocean current that flows northward between the Yucatan Peninsula and Cuba into the Gulf of Mexico delivering warm sea waters.

Warm seas typically result in higher moisture and therefore higher dewpoints, leading to more robust convective instability. This also hints at the rather concerning potential for severe weather across the Dixie Alley, the south-southeastern portions of the country this spring.

Once the winds ignite the moisture return from the Gulf of Mexico, strong instability would build up. The red arrow on the chart below indicates a typical April-June wind pattern flow over the Gulf into the US mainland. 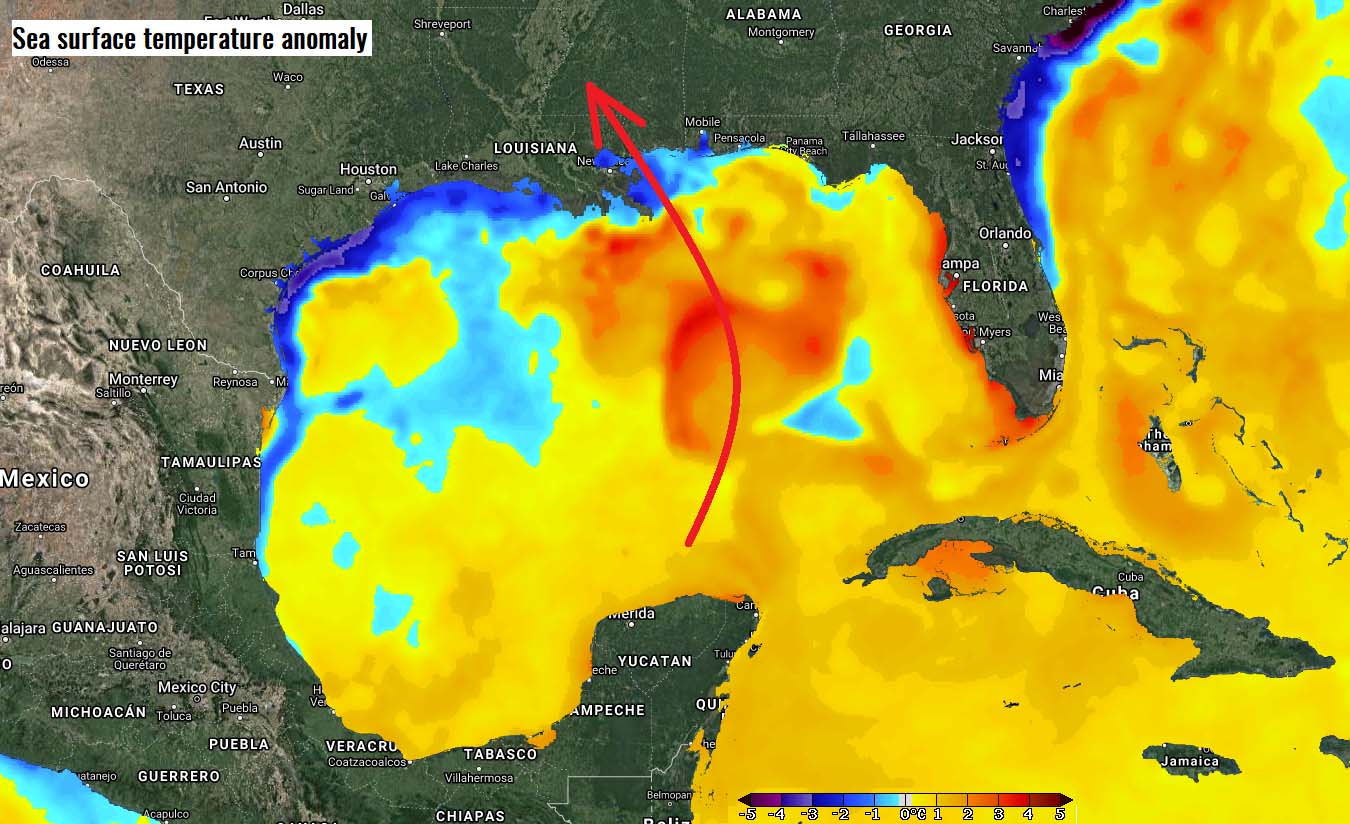 Notice one very obvious anomaly on the map as well. The waters along the Gulf Coast running from deep south Texas to Louisiana and Mississippi coast are significantly lower than normal. That is the effect of the historic cold outbreak a couple of weeks ago. Frigid cold air mass did cool down the sea waters as well, keeping them around 2-4 °C below average even now, in early March.

This should have a definite effect on the start of the severe weather season across the Plains, likely delaying its start as we discussed in one of the articles last week. The coastal waters are cooler across the narrow band, however, as the shallow depth plays a role in their temperature change more dramatically than having deeper water.

Note: Besides the high dewpoints needed, there is another ingredient needed for storms to get going, that is the jet stream. The jet stream is the name for the fast winds in the upper-level parts of the atmosphere.

And the combination of very moist and warm lowest levels of the atmosphere and the enhanced winds (jet stream) aloft, bring these ingredients together and the result is organized severe storms, including tornadoes.

Generally speaking, the higher the instability and winds/shear, the more robust and organized/dangerous storms can develop.

The interaction of the cold air masses coming from the north with the much warmer air mass developing farther south, lead to frontal systems and convective weather. When we have a transition from late winter into the early spring season – this normally happens during the month of March, both pressure and temperature gradients between the north and south are the most pronounced.

On this chart, we can see the general pattern across North America through mid-March, with a deep cold pool remaining over Arctic Canada and a significant warm plume across the southern United States. In between, pronounced jet stream winds expand from the West Coast across the Great Plains into the Northeast. 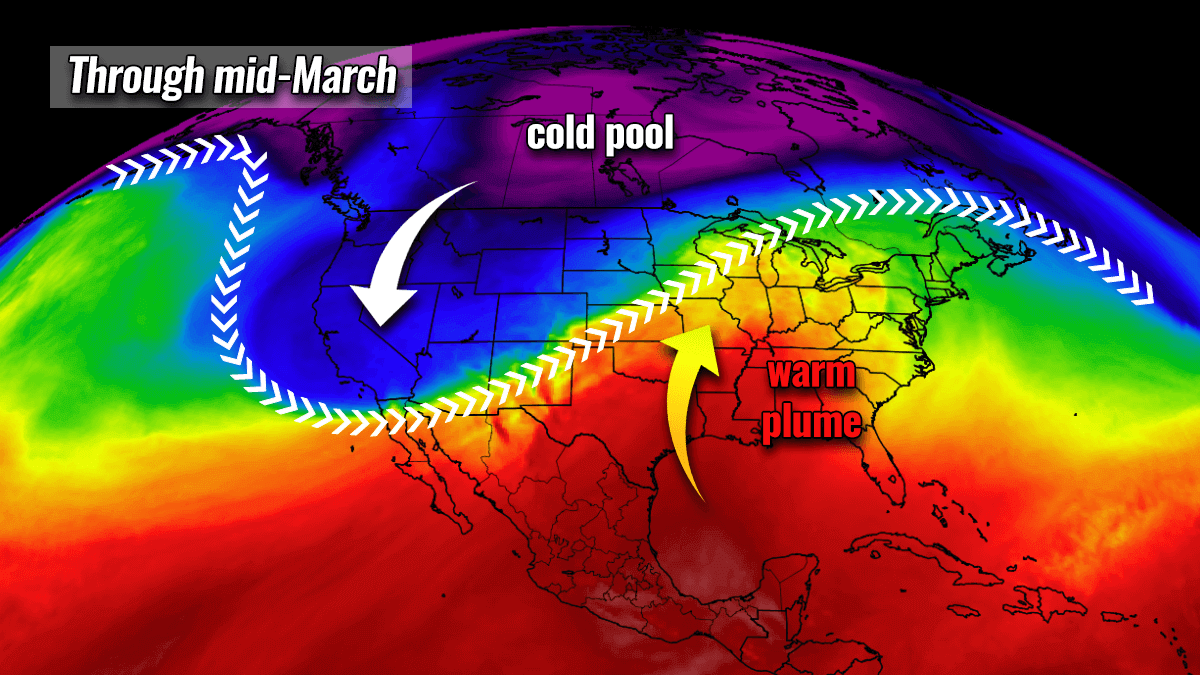 This means the environments get more volatile and weather changes are more dramatic and significant. A shift in the upper-level weather pattern will bring widespread warmth for the south, central and eastern United States next week. Even record warmth in some places e.g. Oklahoma, Kansas, and Nebraska through mid-week.

The weather models are lately hinting at a developing more progressive weather pattern across the central United States coming up next week. Through the mid-week, the frontal system could lead to severe storms across the southern and central Plains into the Midwest. With also some snow further north of the cyclone’s tracks. 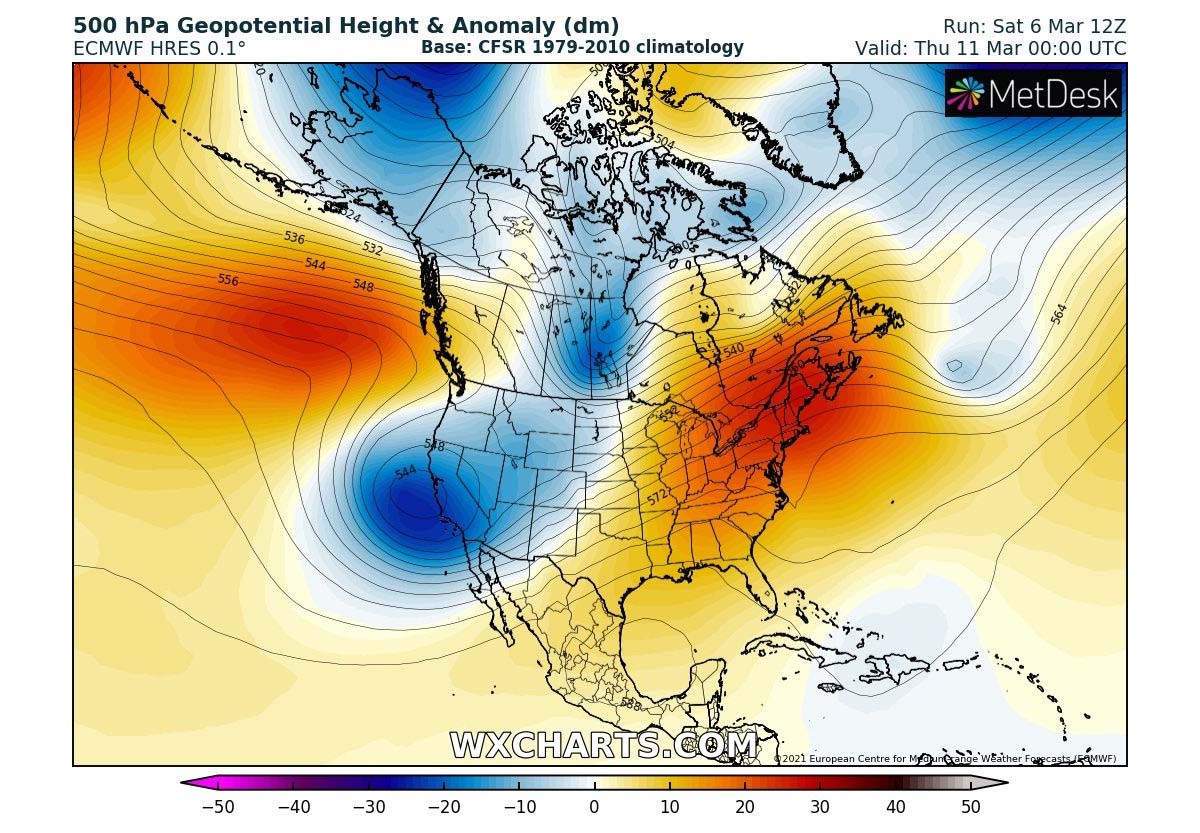 It looks like a developing ridge across the southeast portions of the US will ignite much warmer weather for millions, while the cold pattern keeps pressing into the northern states from Canada. In between, more dynamic activity is expected due to enhanced jet stream with the favorable position for storms to develop over the Plains. 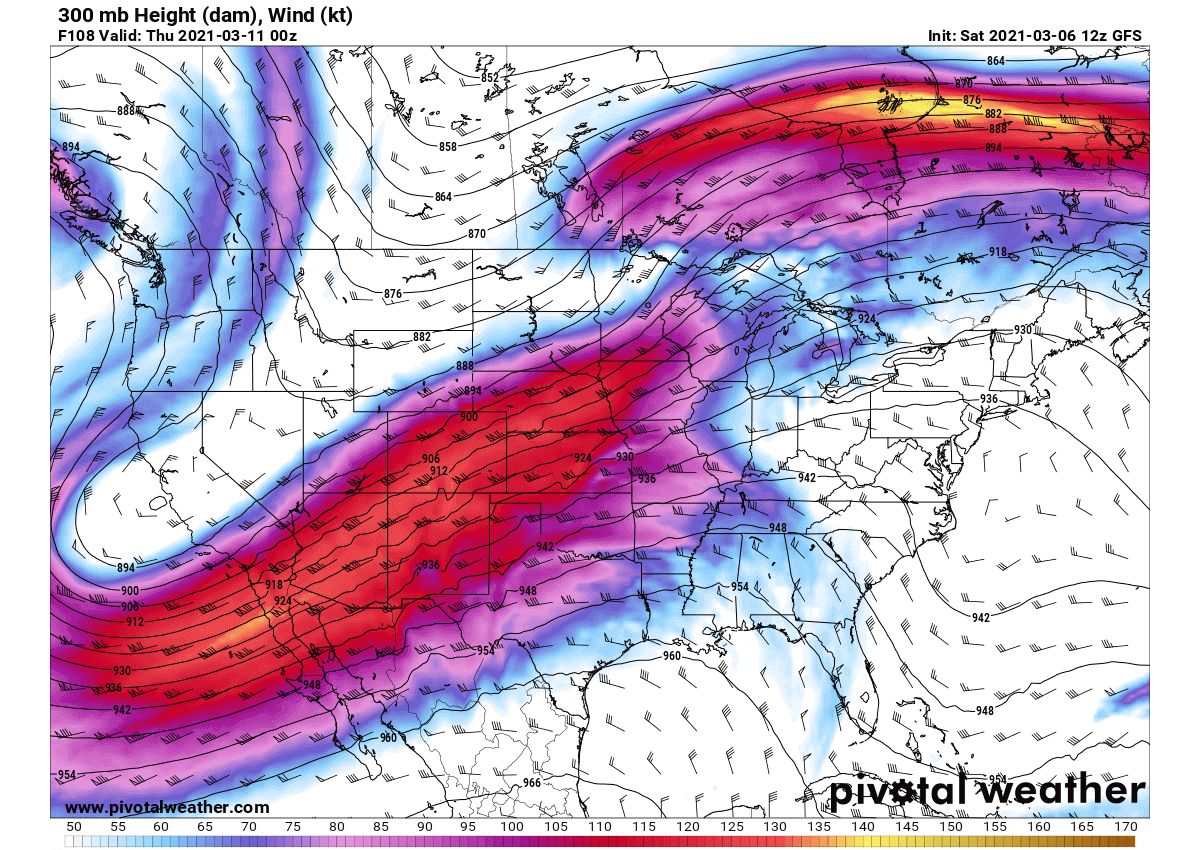 A few systems are likely to travel across the central parts of the country, from the Rockies towards the Great Lakes and Midwest. Their exact trajectory is still hard to define so far in advance, but it seems the overall change in the pattern is trending this way.

Thanks to the quite impressive temperature difference between the cold to the north and warmer to the south of this corridor, frontal systems could be in for quite robust severe thunderstorms at times. Recent model guidance hints at a few days period from Wednesday through Sunday as being the more pronounced days for potential severe weather events. 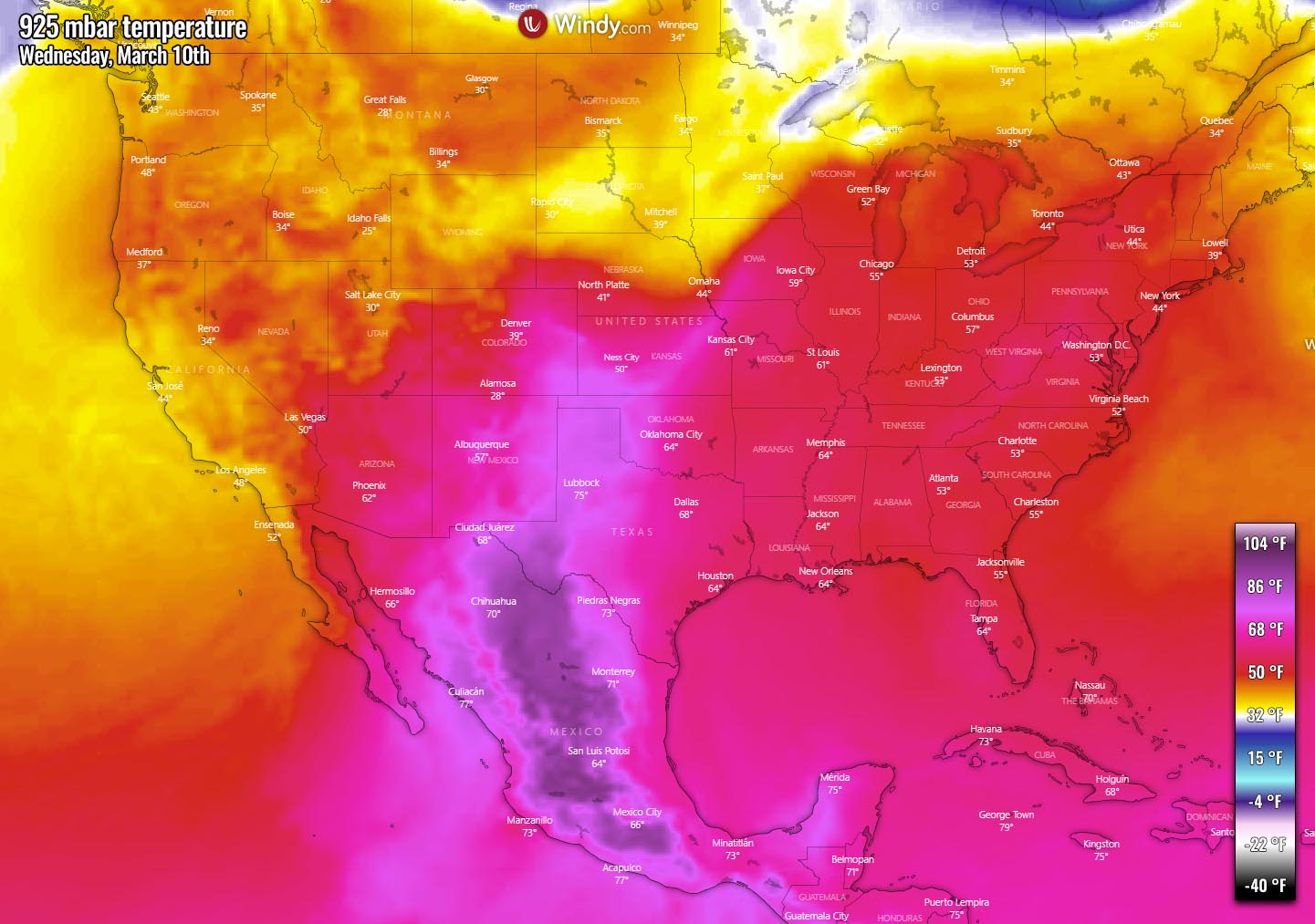 The general area which should monitor the potential increasing threats for severe weather extends from Texas, Oklahoma to the mid-Mississippi Valley into the lower Midwest to Ohio Valley after Tuesday next week. Severe thunderstorms will be possible, including supercells with large hail, damaging winds, and tornadoes.

Although still a week ahead, the global model ECMWF is hinting at a pronounced deep upper troughing pattern to intensify through the late next week into the weekend days. A deep trough develops over the West and gradually pushes across the Rockies into the central parts of the country. 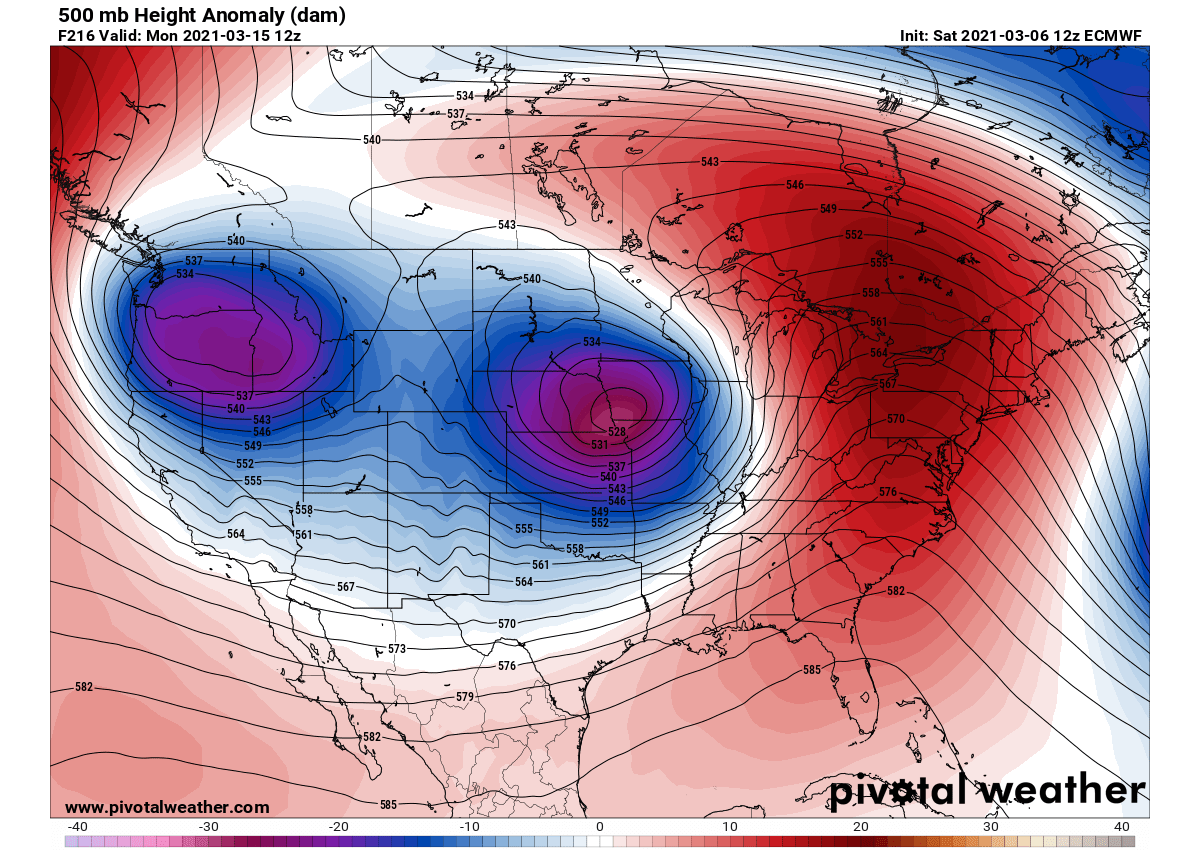 This is a rather typical pattern that often leads to severe weather outbreaks for the South. Over the weekend, a powerful jet stream seems to develop across the Great Plains, leading to a secondary low in the Lee of the Rockies which brings higher moisture return from the Gulf of Mexico farther north into the Plains.

So the environment becomes conducive for dangerous severe weather evolution across the south-central Plains into the mid-Mississippi and parts of the Midwest. 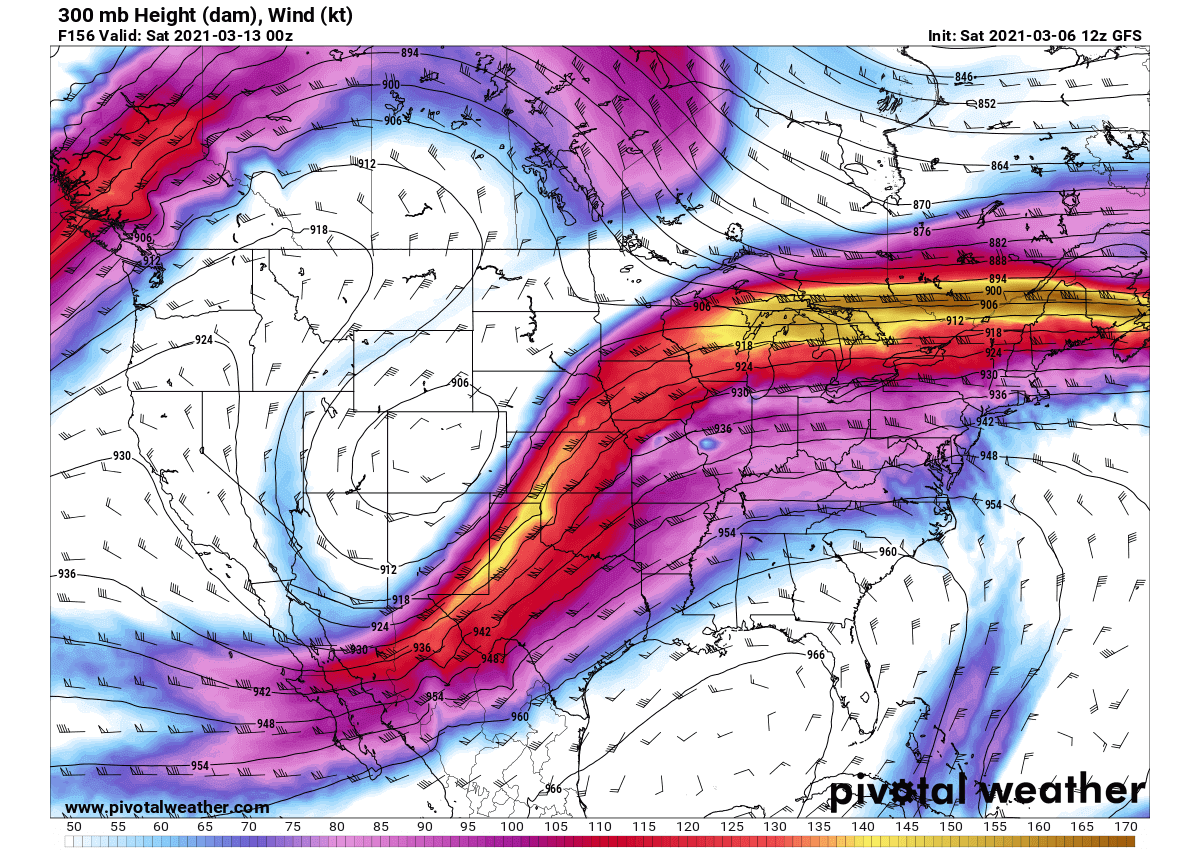 Indeed, let us repeat, it is way too early to make any conclusions but the trend keeps the pattern change this way in the recent days. The potent upper low could trigger widespread convective storms and bring dangerous weather for many. Also with fresh snow in the wake of the systems farther north across the Northern Plains and the Rockies.

Certainly, a follow-up update is needed and the pattern evolution to be monitored in the coming days. Stay tuned.

***The images used in this article were provided by NOAA, Wxcharts, Pivotalweather, and Windy.