The Earth narrowly missed a meteor storm on October 9

Meteor storms are some of the most intense and spectacular space weather events. They may also pose a very significant hazard for our orbital infrastructure: satellites and space stations may be damaged by incoming meteoroids. Last week, on October 9, the Earth narrowly missed a meteor storm – here is what happened.

Meteor storms occur when the Earth ploughs into clouds of dust (meteoroids). Typically the dust originates from comets: icy dirtballs that round the Sun in elongated elliptical orbits. Each time a comet comes close to the Sun, ice in its nucleus sublimate and release small dust particles trapped within it. These dust particles form elongated dust clouds, called meteoroid filaments that move in orbits very similar to the comet. If and when the Earth crosses a meteoroid filament, a meteor outburst happens; if there is enough dust in the filament, a downpour of meteors happens – a meteor storm. 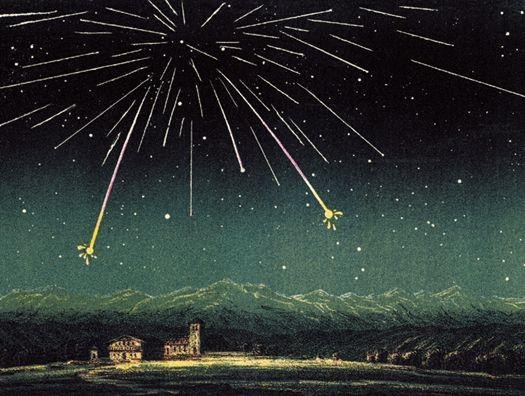 Why meteor storms are important

Prior to the space age, meteor storms were mostly ‘just’ exceptionally exciting celestial events. Studying these events produced knowledge of the orbital dynamics and matter transfer in the Solar system. Over the past 60 years, however, with increasing number of satellites in near-Earth space and our increasing reliability on orbital infrastructure, meteor storms pose an increasing threat to our everyday lives. Meteoroids (dust particles) approach the Earth at tens of kilometers per second: a typical Draconid meteoroid impacts the Earth’s atmosphere at 20 km/s (kilometers per second!), while a typical Leonid meteoroid moves at over 70 km/s! That is 20x and 70x faster than a bullet from a high-power rifle, respectively!

Basically when a meteor storm happens, satellites in Earth orbit are under fire from high-speed cometary projectiles. Even a relatively small meteoroid has a lot of kinetic energy and the potential to mechanically damage a satellite. Smaller meteoroids may not produce mechanical damage, however, on impact they vaporize, producing a cloud of plasma – strongly ionized and electrically conductive gas – which can shortcircuit electronics on a satellite.

On October 9 the Earth encountered the Draconid meteor shower. This is a well-known meteor shower, produced by meteoroids of the also well-known comet 21P/Giacobini-Zinner (which was easily visible with binoculars back in August and September). The Draconids are a very interesting meteor shower: typically this is a very weak shower, producing perhaps one or two meteors per hour. Except for years when the parent comet is close to the Sun, then the Draconids may erupt in a torrent with hundreds to tens of thousands of meteors per hour. As this autumn the parent comet was close to the Sun, so were the densest meteoroid filaments. On October 8 and 9, between 22h and 2h UTC, the Earth serendipitously passed right between two dense stacks of multiple meteoroid filaments. Were these stacks just 800 000 km (just over twice the Earth-Moon distance) Earthward, we would have experienced a meteor storm with about 3000-4000 meteors per hour, perhaps significantly more. There was some cometary dust between the two dense clouds, and the Draconid meteor shower actually made a pretty good show, with observers seeing over 100 meteors per hour. A good meteor shower, but far short of a meteor storm. 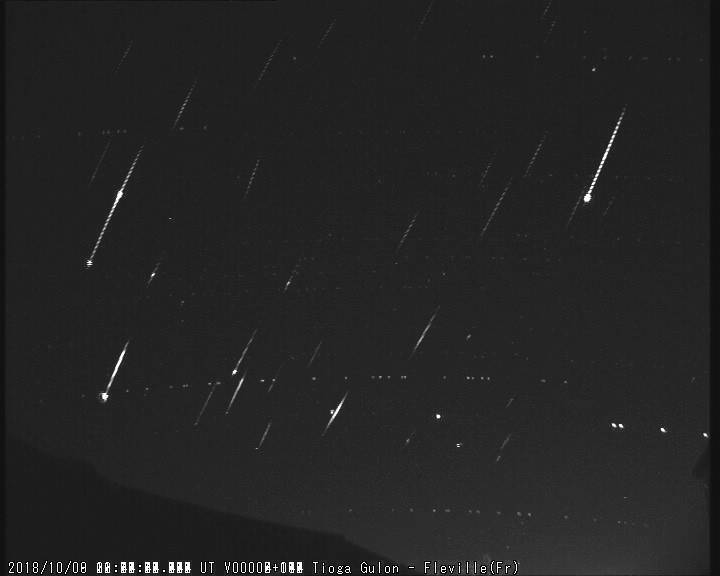 It was a more harrowing ‘night’ for spacecraft in Lagrange points L1 and L2. As modeling by Auriane Egal and coworkers indicates, meteoroid flux in these points was very significant. Lagrange point L1 is occupied by a number of spacecraft, including SOHO, ACE, GGS and DISCOVR. The flux of meteoroids in L1 was equivalent to a minor meteor storm with over 2000 meteors per hour. It was even more intense for the GAIA spacecraft in Lagrange point L2. The spacecraft is mapping a billion stars in our galaxy; it experienced a downpour of meteoroids equivalent to a minor storm with almost 4000 meteors per hour. Currently there are no indications of significant damage to any of these spacecraft.

When is the next meteor storm?

A relatively little known meteor shower, the Tau Herculids may be the next one to erupt into a major meteor storm. This obscure meteor shower was first spotted in 1930, when Japanese observers noted a flurry of meteors coming from the constellation Hercules. Not much of the shower has been seen since. However, in 2022 the Earth will encounter meteoroid filaments from this meteor shower which is expected to produce significant meteor activity. But there is more.

While dust is typically released from the parent comet by outgassing of sublimating ice, occasionally comets fragment or disintegrate, releasing much more dust. This happened with comet 3D/Biela in the first half of the 19th century; the enormous dust release produced the intense Andromedid meteor storms of 1872 and 1885. In the same manner, the parent comet of the Tau Herculid shower (comet 73P/Schwassmann-Wachmann 3) has been observed to be fragmenting and disintegrating since 1995. On May 22, 2022 the Earth encounters several meteoroid filaments, including the one formed in 1995 when the comet first underwent major fragmenting and disintegration. That year the comet was over a thousand times brighter than expected, which shows that there was a massive release of dust. Similar to the Andromedid storms a century and a half ago, we may well be heading into a major meteor storm when we encounter dust from 1995. One prediction, by Mikhail Maslov who has a number of successful meteor shower predictions under his belt, is for 10 000 to 100 000 meteors per hour. If it pans out, it will be one of the biggest meteor storms in the past 2 centuries.

More about the Draconid meteor shower outburst of October 9, 2018

First impressions of the 2018 Draconids outburst