For the past few weeks, snow cover has been increasing across the northern hemisphere, as it is usual for autumn. Snow cover extent over North America has been rapidly increasing, thanks to a specific weather pattern. On the other side, over Eurasia, we currently have below normal snow extent. Ensemble forecast does indicate a possible change in the near future.

In the first two weeks of October there was a very specific weather pattern across the north hemisphere. We had ridging over the Bering Sea and the Arctic, which caused a cross-polar flow from the Arctic down into North America. That has helped increase the snow cover over the continent. On the other side of the world in Siberia, the same pattern had the opposite effect, and has contributed to slower snow cover advance. 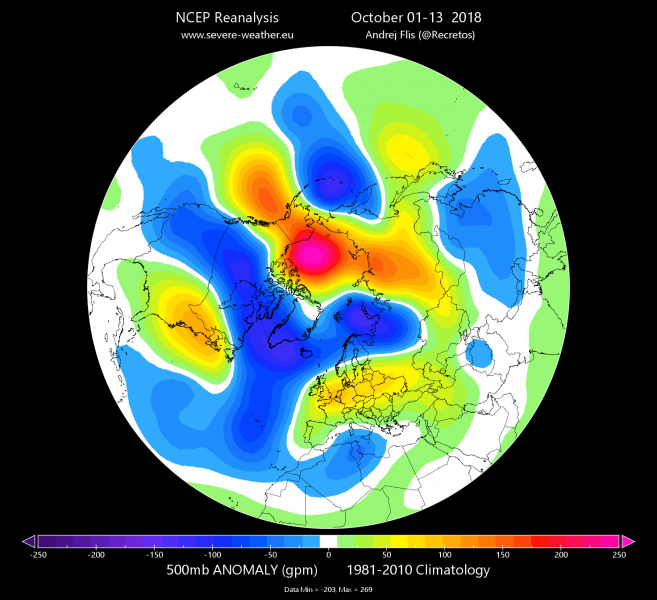 Looking at the NCEP snow cover analysis, we see quite a large area of snow cover over the western hemisphere. Eurasia has below normal snow cover for this time of year. 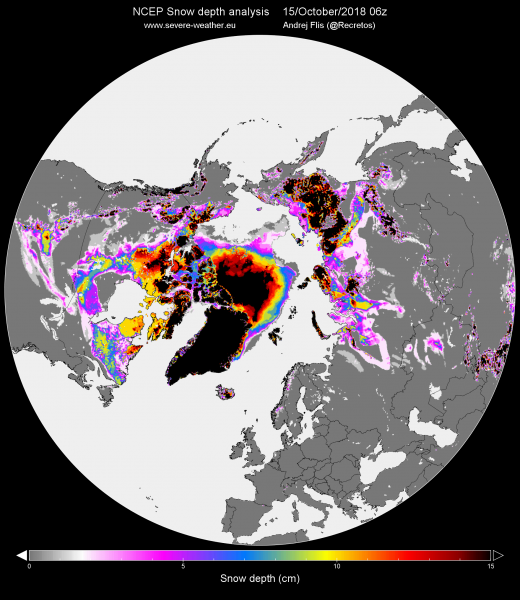 Data from NOAA/NESDIS shows the snow area extent for the last decade. North America is at the highest level in over a decade, while Eurasia is currently struggling to get to normal values. 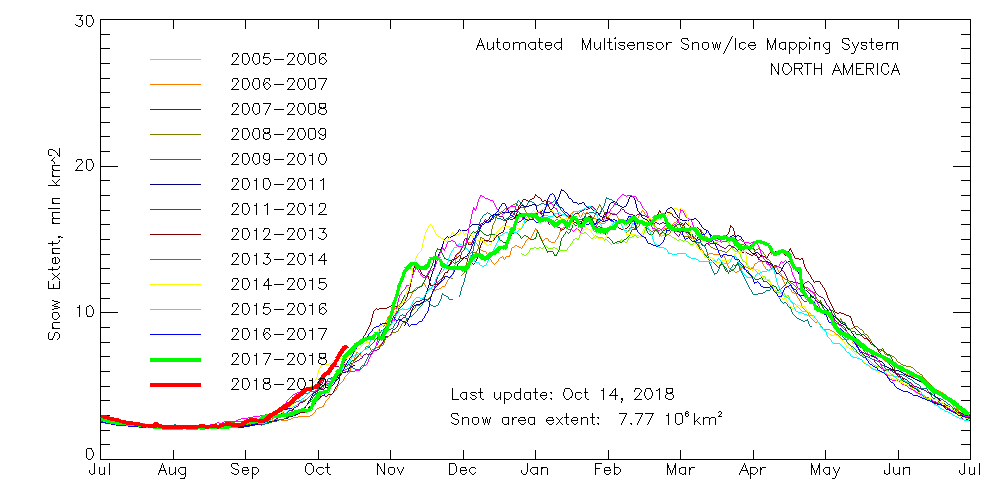 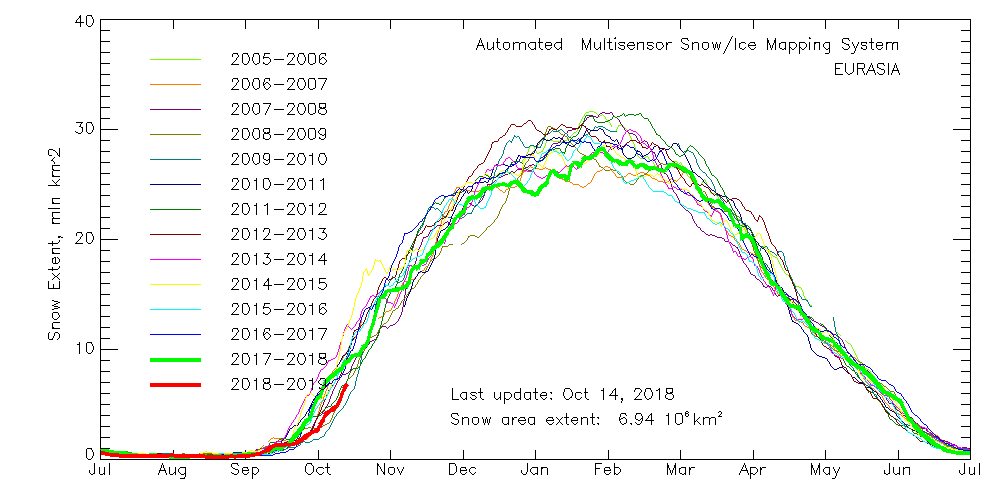 The snow area extent in Eurasia, mainly in Siberia, is very important for long range weather development. It has been proven by multiple studies that the snow cover extent in October over Siberia has a major effect on weakening of the stratospheric polar vortex. It does so by enabling a stronger “Siberian High”, a well know winter anticyclonic feature over Siberia. That process in return has a feedback effect on the mid-winter troposphere, as it can cause the arctic oscillation to drop and causes the cold arctic air to move further south, causing more cold air outbreaks and more cold fronts to advance down into the mid-latitudes over Europe and continental United States. The chance for this increases significantly if there is a “Sudden Stratospheric Warming” or SSW, which is a complete breakdown or displacement of the stratospheric polar vortex. This entire process also heavily depends on other global factors, and weather patterns on a week-to-week basis. 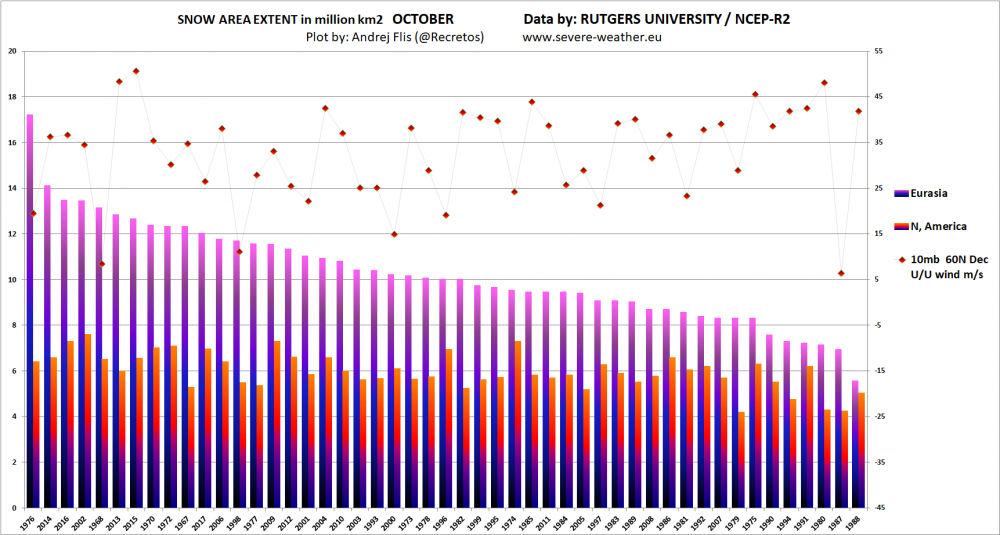 Looking at the graph above, we can see the years are ranked from highest to lowest. Note the two plots of sea level pressure anomalies for winters following the highest 5 and lowest 5 October Siberian snow cover areas. It is very obvious that the winters following the 5 highest snow cover extents in October, had high pressure over Arctic, which corresponds to a negative Arctic oscillation. That promotes transport of cold arctic air down into mid-latitudes of Europe and United States.
The second plot shows winter sea level pressure anomalies, following the 5 lowest October Siberian snow cover extents. It shows positive Arctic oscillation, with low pressure being closed over the north pole, promoting warm/dry conditions in the mid-latitudes of Europe and United States. It was assisted by a strong stratospheric polar vortex. 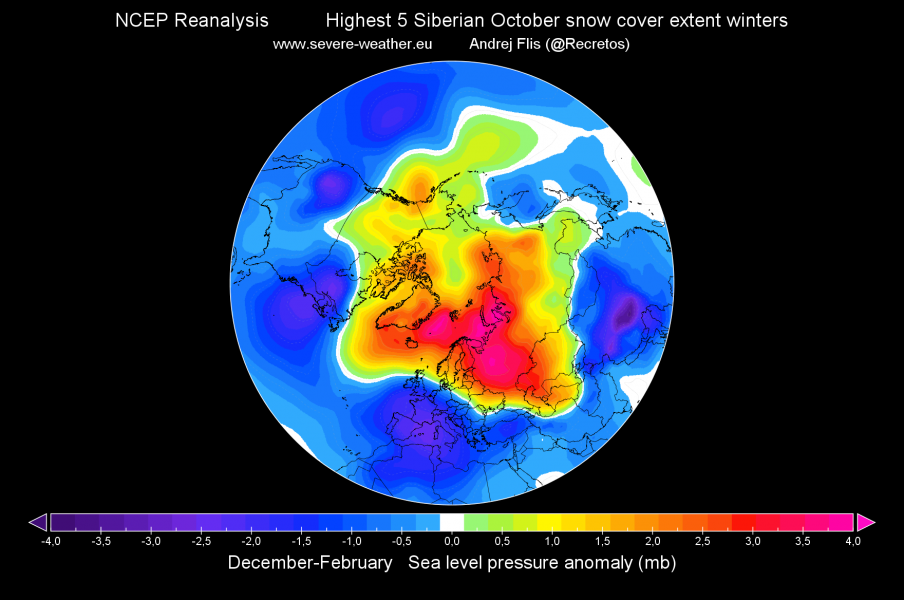 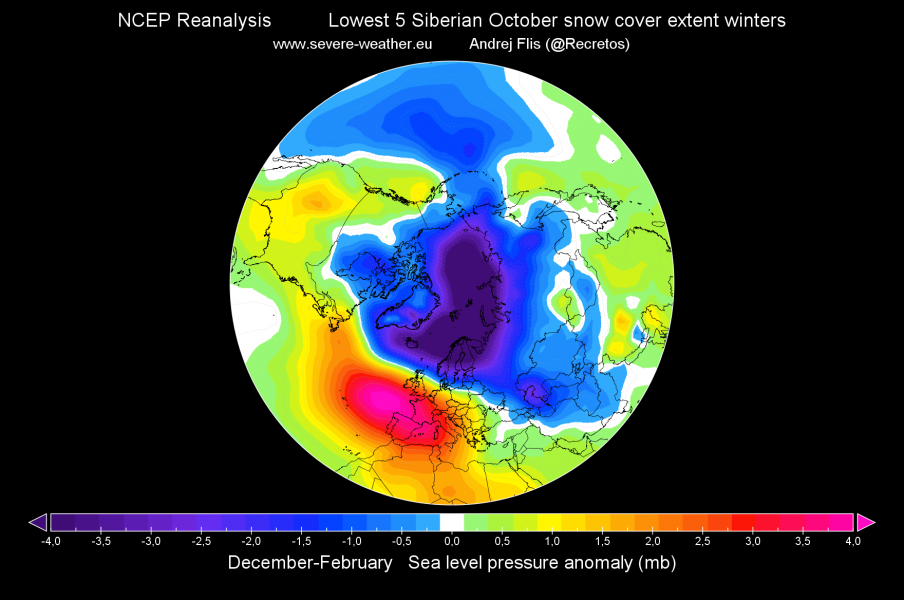 Currently, the GEFS ensemble forecast shows the Eurasian snow cover to start advancing at a higher pace, likely reaching normal or above normal snow extent by the end of October. That is perhaps a welcome sign for those that like colder and/or snowier winters. It is not necessarily used as a forecast for the winter, but just one of the very important factors that we need to be aware of that can have major implications for the weather that lies ahead. 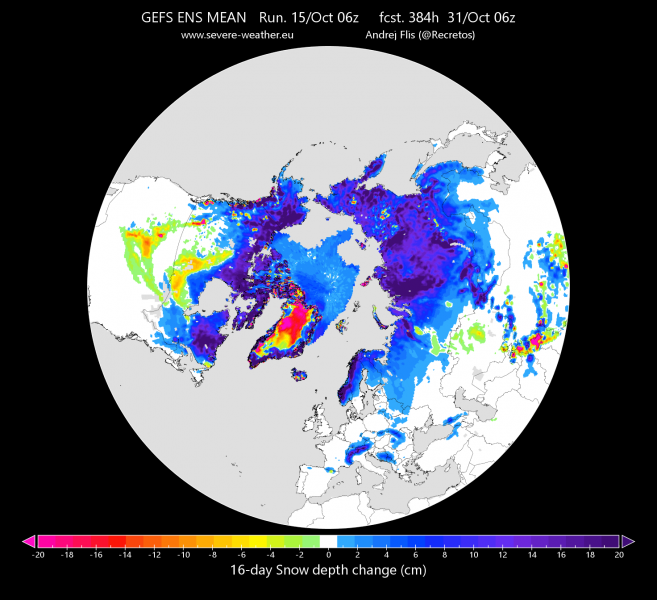 Stay tuned for future updates on the development of the weather patterns across the hemisphere as we go slowly towards the new winter season.