A few days ago, we wrote about the intense sudden stratospheric warming starting over the south pole. As recent data shows, it will go down as the strongest in known records over the south pole, strong enough to even temporarily reduce the size of the ozone hole.

The warming is currently still ongoing, and is forecast to persist for a while. As the south pole goes deeper into spring, the stratosphere will remain warm, since there is more influence and warmth from the sun with each day. Below we see the data from NOAA/CPC, which shows the warming in the stratosphere over south pole at high altitudes, and moving down with time, influencing weather at the surface. 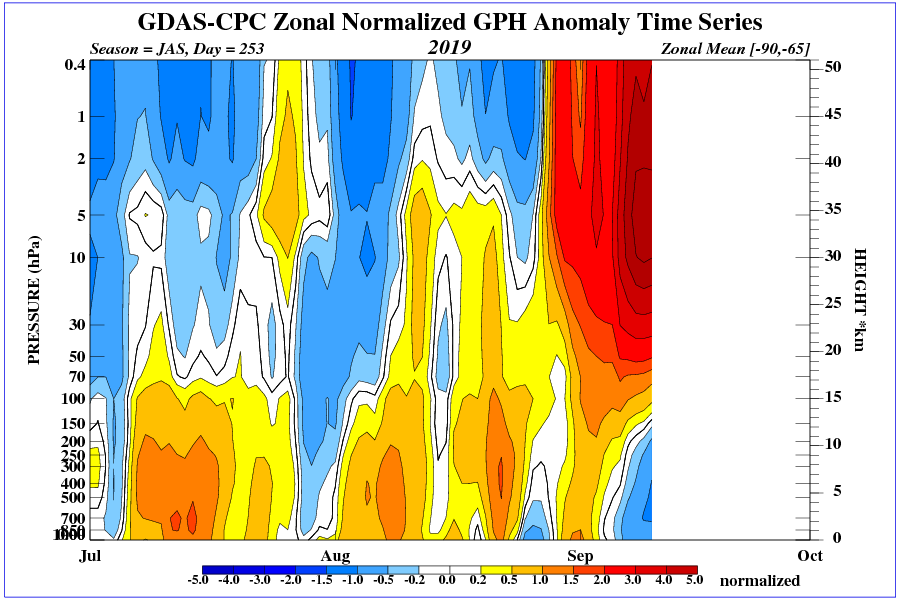 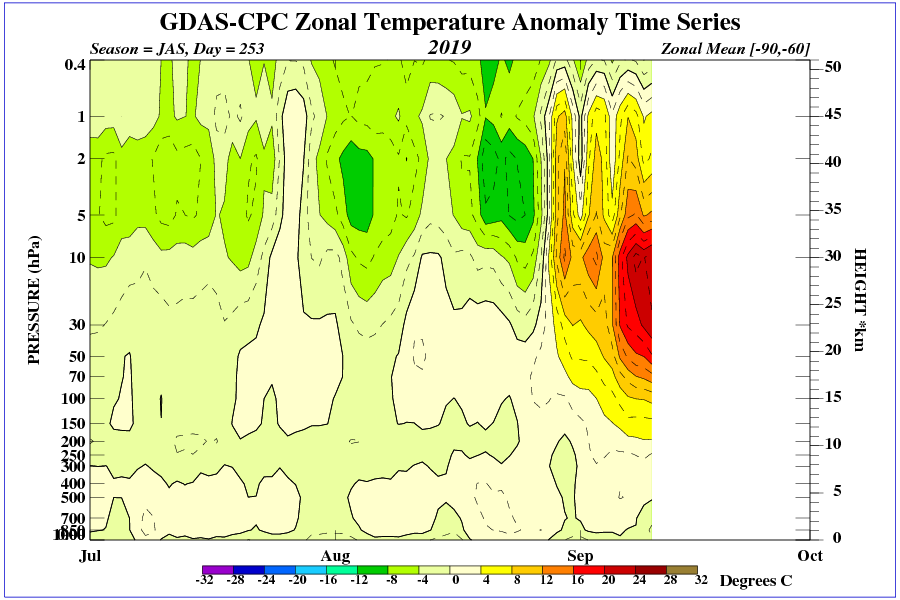 As the upper levels warm, they tend to raise pressure in the lower levels. That can cause a shift in weather patterns, which can push the cold air out from the pole and into surrounding continents. One such example is the cold air moving into Australia next week. The stratospheric warming influences the regular chain of events, causing changes in weather patterns. Below we can see how the cold air enters Australia in the west. Maps show temperature anomalies at 850mb level (~1500 m altitude) and on the surface. Some places are forecast to get air temperatures  more than 10 °C below normal. 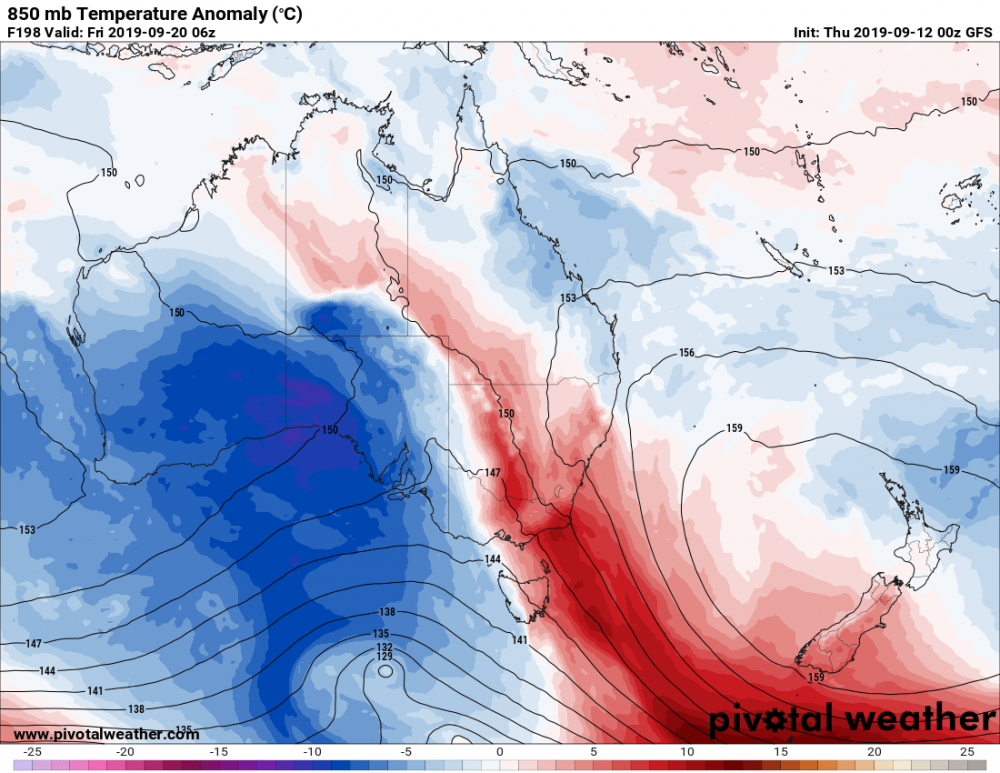 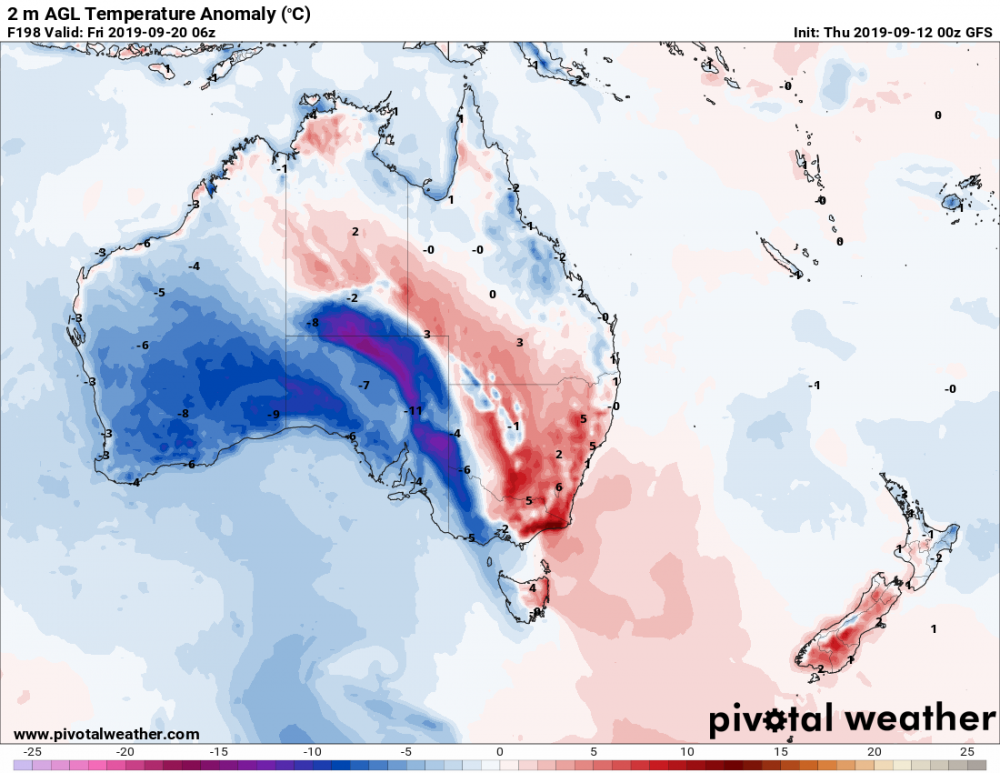 The cold wave then moves further east, where it persists for longer time in eastern and southern parts of Australia. The diagram below shows the ensemble forecast for southern Australia, where we can see the cold air persisting for a while. 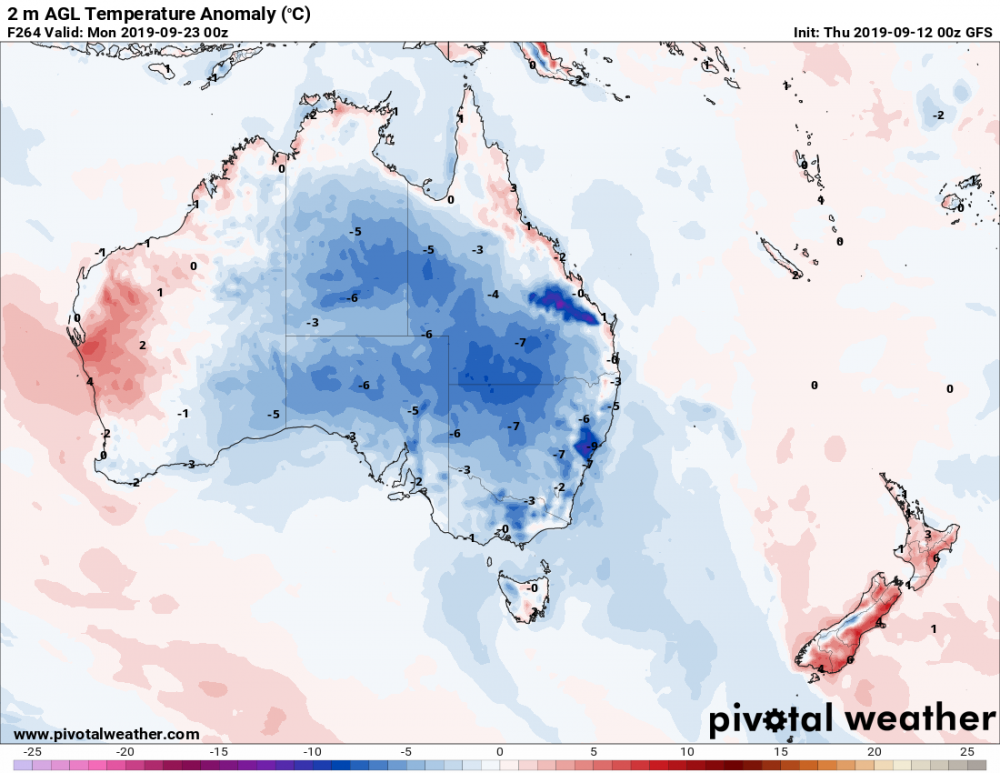 The warming is strong enough to even reduce the size of the infamous ozone hole over the south pole. The ozone hole forms as the stratospheric clouds form in the cold air (below -78°C) in the stratosphere, which start a foto-chemical reaction once the sunlight hits them. That is why the ozone hole only forms in spring when the air is cold enough and Sun rays already strong enough.  That reaction (powered by the human releases of CFC and HFC aerosols) destroys ozone, and creates the well-known ozone hole, an area of very low ozone concentration. Ozone is the protective layer that shields us from dangerous UV radiation. Under an ozone hole, that protective layer is gone, which can cause problems for living organisms, as the harmful UV radiation hits them. Its well known to cause skin cancer.  A stratospheric warming event naturally warms the stratospheric air, reducing the amount of stratospheric clouds, and limiting the ozone destruction process. That all together limits the size of the ozone hole, as we can currently see. The image below shows the ozone analysis on September 9th 2019, from the NASA ozone monitoring project. We can see high values of ozone in red, powered by the stratospheric warming, since warmth and ozone go hand in hand. The ozone hole (lower, blue values) is a bit limited in size and does not feature severely low values of ozone (violet color). Some of it was displaced towards the tip of South America. 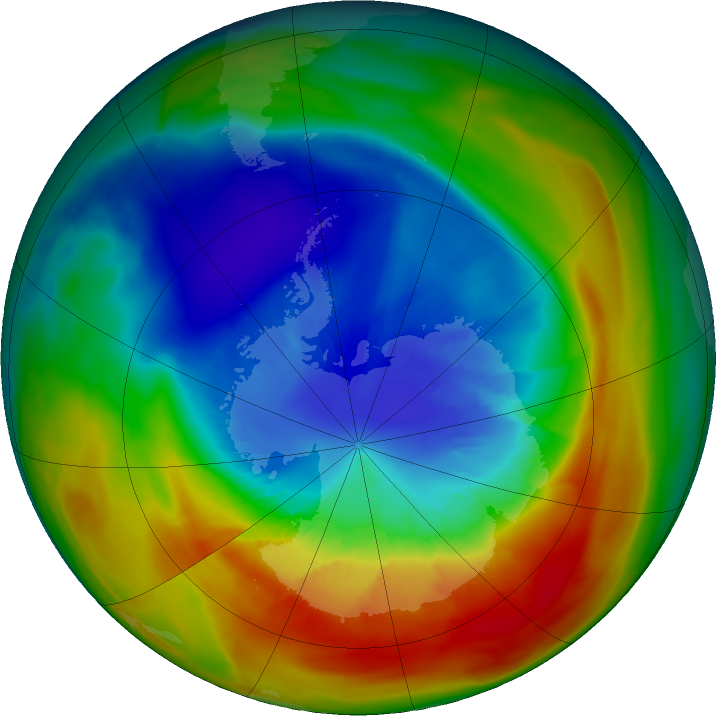 The size analysis from ECMWF data (graph is from the Copernicus EU project), shows the current size being well below the normal for the past 16 years, and is one of the lowest since 1980s, when the ozone hole first started to form. As the stratospheric warming weakens and the stratosphere cools briefly, the ozone hole will likely increase in size, but should remain below normal in size.