Severe storms including supercells with torrential/excessive rainfall, severe winds and marginal hail are likely across the northern Mediterranean on Thursday. A lot of rain is expected over northern Italy. Severe winds will spread in the wake of surface low across western Europe.

A very large and deep long-wave upper trough is moving into western Europe. A strong upper ridge develops over the Azores and northwestern Russia. A short-wave enter Turkey from the west. At the surface, a deep low forms over Ireland deepens while moving towards the southeast. It reaches Benelux on Thursday night. Cold front is moving into central Europe. 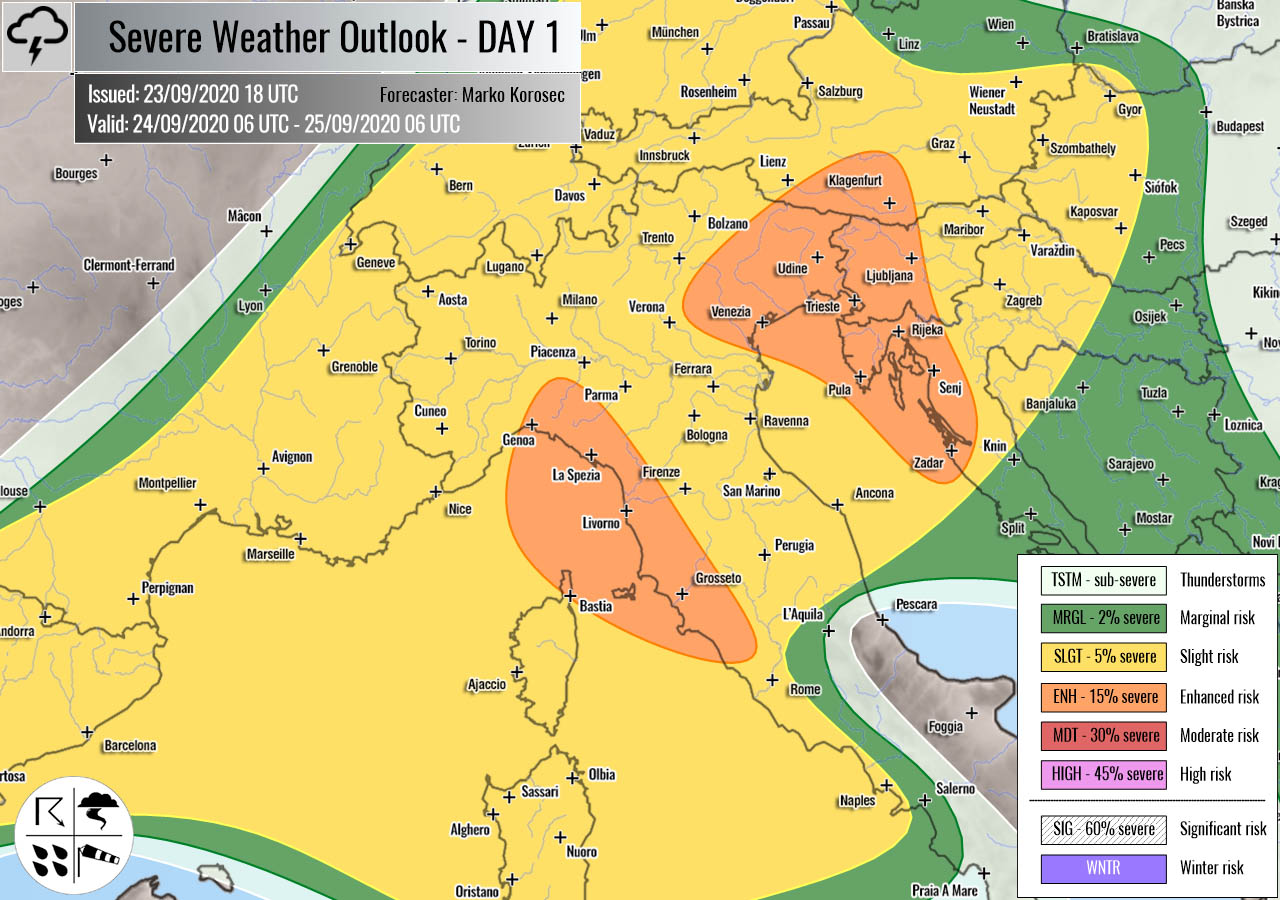 ENH risks have been issued for northeast Italy into southern Austria, western Slovenia, northwestern Croatia, and the northern Apennines with a threat for severe storms, capable of producing severe winds, marginal hail, and torrential/excessive rainfall.

SLGT risk has been issued for the areas surrounding the ENH risk across the northern Mediterranean and central Europe with a more isolated threat for severe storms, capable of producing severe winds, marginal hail, and torrential/excessive rainfall.

Large scale forcing along with the approaching upper trough will result in rather widespread organized storms, expected to form within a sheared and moderately unstable environment. Supercells are possible as well, especially across northeast Italy in the late afternoon and evening hours.

With time, shear will increase and therefore strongly organized storms are likely to form. While the primary threats will be intense rainfall and flooding threat, supercell storms could also bring severe winds and some hail.

Rainfall sums could reach 100-150 mm, potentially even close to 200 mm across the ENH risk areas. A combination of both strong orographic and convective rainfall could lead to flash floods.

The threat will be gradually enhance while spreading east-northeast with an arriving upper trough, moving into the Alpine region. Storms could cluster into larger systems over the northern Mediterranean region overnight to Friday.

SLGT risk has been issued for the Bay of Biscay, extreme south Ireland, southwestern England, and northwestern France with a threat for severe (non-convective) winds.

Associated with the deep surface low moving over the Ireland and UK, mainly non-convective severe winds are likely across the SLGT risk area. Peak gusts could exceed 100 km/h.

Some convective storms will also be possible to the north of the SLGT risk area, within very cold mid-levels of the maritime air mass.

TSTM risks have been issued for parts of eastern Europe and the Balkans, eastern Turkey into Georgia, and across Ireland and England with a threat for daytime driven storms. Limited shear is present, so the storms should remain sub-severe.