A severe weather outbreak is forecast for parts of the north-central Mediterranean on Saturday. Widespread severe storms, including intense supercells, will be capable of producing destructive winds, tornadoes (possibly strong), torrential rainfall with flash floods, and large to very large hail. The threat is particularly extreme along the eastern Adriatic coast! 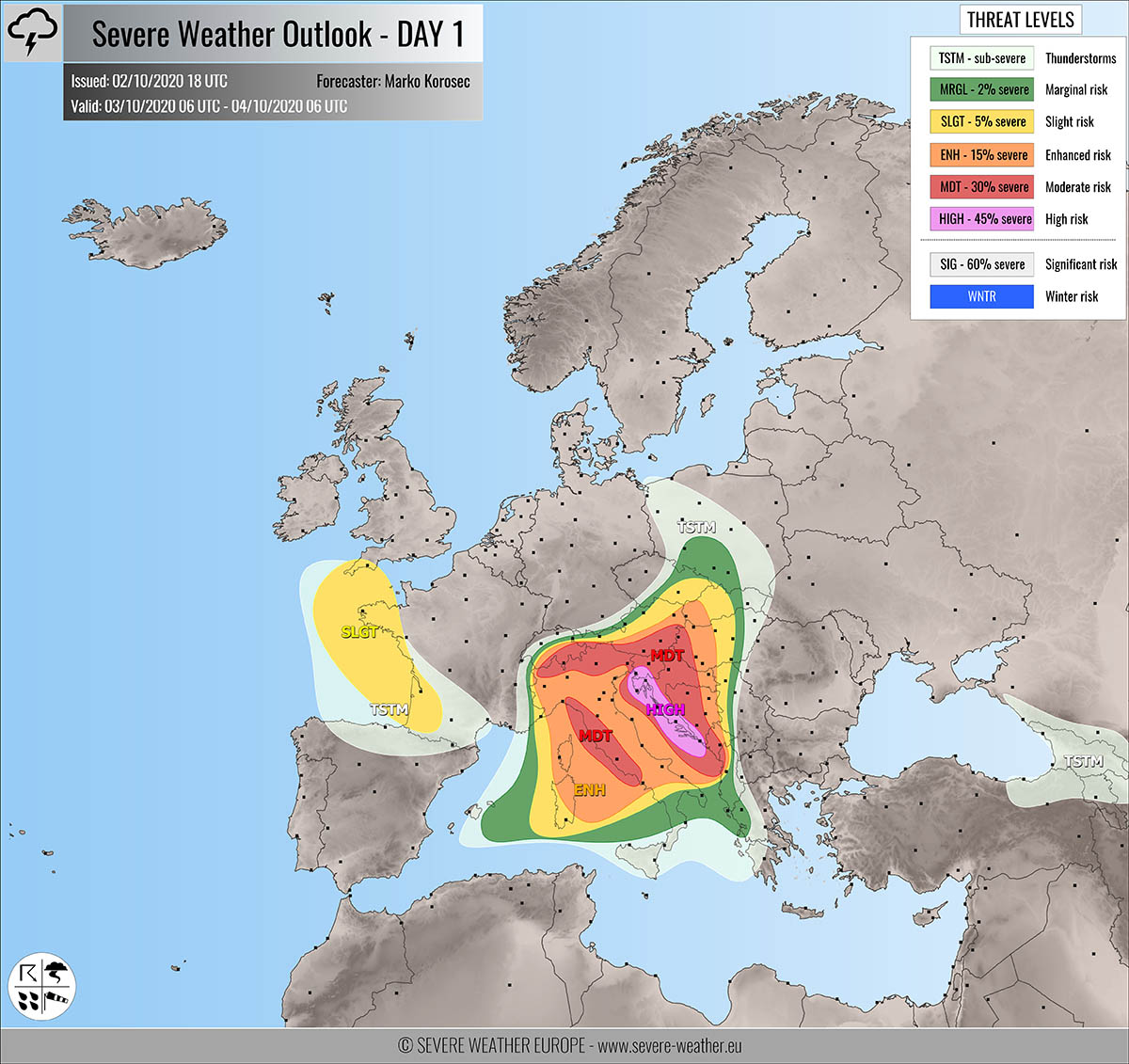 A large upper-level low is moving from western Europe towards the Alps and the northern Mediterranean. Surrounded by the upper ridge to its north, east, and over the Azores. At the surface, a deep low – storm Alex is rotating over France with an associated sharp cold front pushed east across Italy and the western Balkan peninsula. 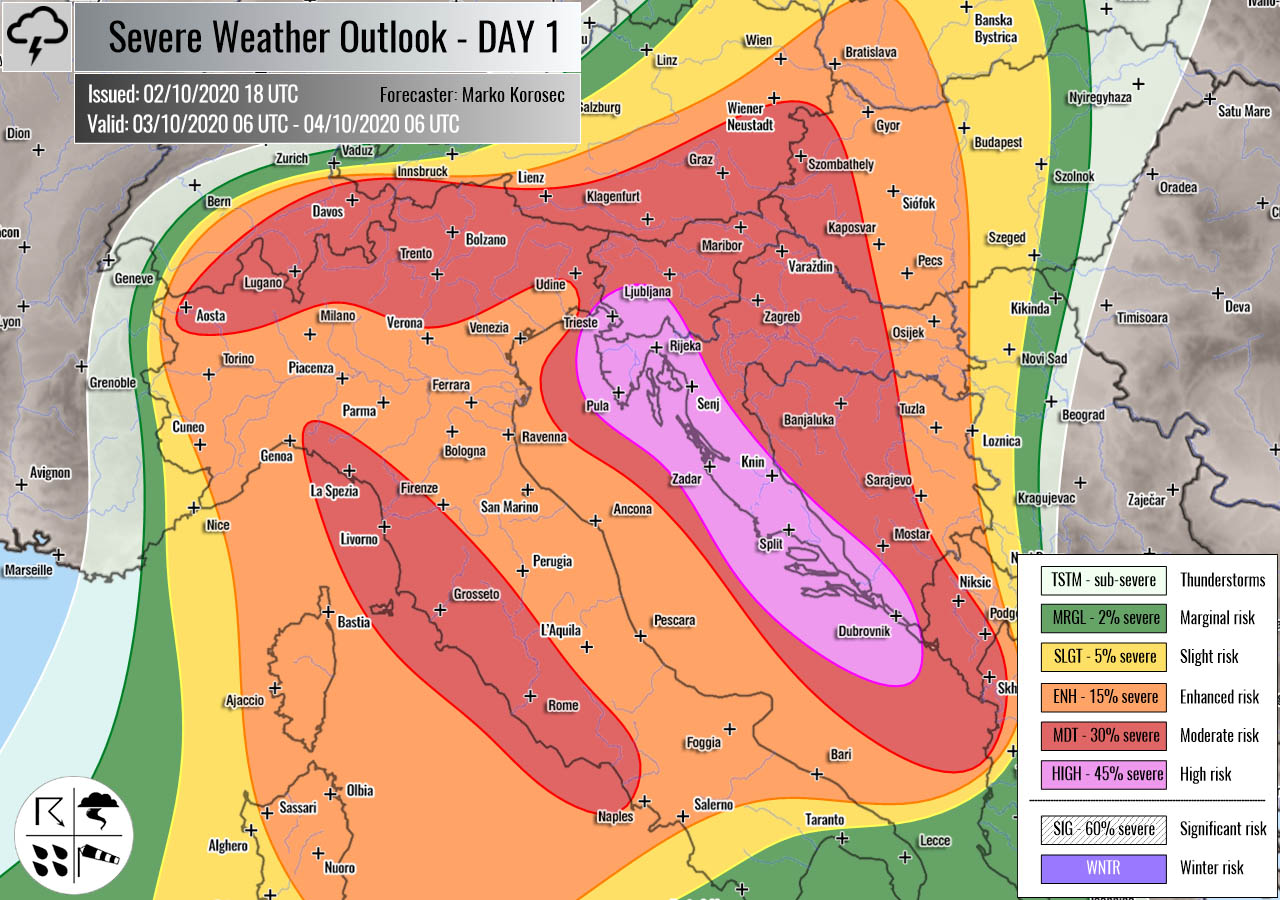 HIGH risk has been issued for southwestern Slovenia into western Croatia and southwestern Bosnia with a threat for widespread severe storms capable of producing severe damaging winds, torrential rainfall with flash floods, large to very large hail, and tornadoes.

MDT risk has been issued for central Italy with a threat for severe damaging winds, tornadoes, and torrential rainfall.

The overlap of a strengthening jet stream with a very moist boundary layer should support damaging storms to develop. Widespread convective activity is likely throughout the day and night to Sunday further east.

A severe weather outbreak is expected.

The main focus of interest will be the eastward-moving sharp cold front, associated with a deep storm Alex, centered over northern France. The front is advancing east along the approaching deep upper trough/low.

A large-scale upper-level forcing will overspread the warm sector, expanding over Italy, the Adriatic region, and across the western Balkan peninsula. Providing a favorable lift for widespread convection initiation along and ahead of the front.

A moderate to strongly unstable but extremely sheared (70-80 knots) environment is present ahead of the surface front. Nearly 1500-2000 J/kg of MLCAPE will accumulate across southern Italy, the Adriatic region, and western Balkan, even high further south.

The environment will be conducive for explosive and strongly organized storms, including intense supercells forming ahead of the main frontal line. The threat of damaging winds, tornadoes, large hail, and torrential rain will develop.

Very strong low-level shear and helicity, especially along the south-central Adriatic and the Tyrrhenian Sea will enhance the potential for strong tornadoes. This threat is limited to the discrete supercells, possibly forming ahead of the main frontal line.

MDT/ENH risks have been issued for areas surrounding the HIGH risk with a more isolated threat for severe winds and torrential/excessive rainfall.

Once the main frontal boundary enters from the west, an intense squall-line will likely develop. Therefore, supporting destructive winds and torrential rainfall.

A damaging line of storms, including embedded supercells, could develop and race east across the Adriatic region into Slovenia, Croatia, and Bosnia. The line should also remain well-organized further east across eastern Croatia, south Austria, and western Hungary.

A large, quasi-linear MCS (mesoscale convective system) will develop along the front, gradually moving east-northeast across the risk areas.

In addition to the severe wind threats, high rainfall amounts are expected along the mountain chains (Dynaric mountain range, Apennines, and the Southern Alps).

Huge amounts of rain should result from both torrential convective rainfall and strong, persistent orographic rainfall. Rainfall sums could reach 150-300 mm in some areas, leading to damaging flash floods.

For this reason, a HIGH risk for also extended into southwestern Slovenia as high rainfall sums are possible in a short, 6-12 hours period, leading to flash floods.

Another concern is the southerly Scirocco winds across the Adriatic Sea, being the strongest along the eastern Adriatic coast towards the northeast Italian coast.

A combination of strong winds, sea waves, and high tide could result in coastal flooding. 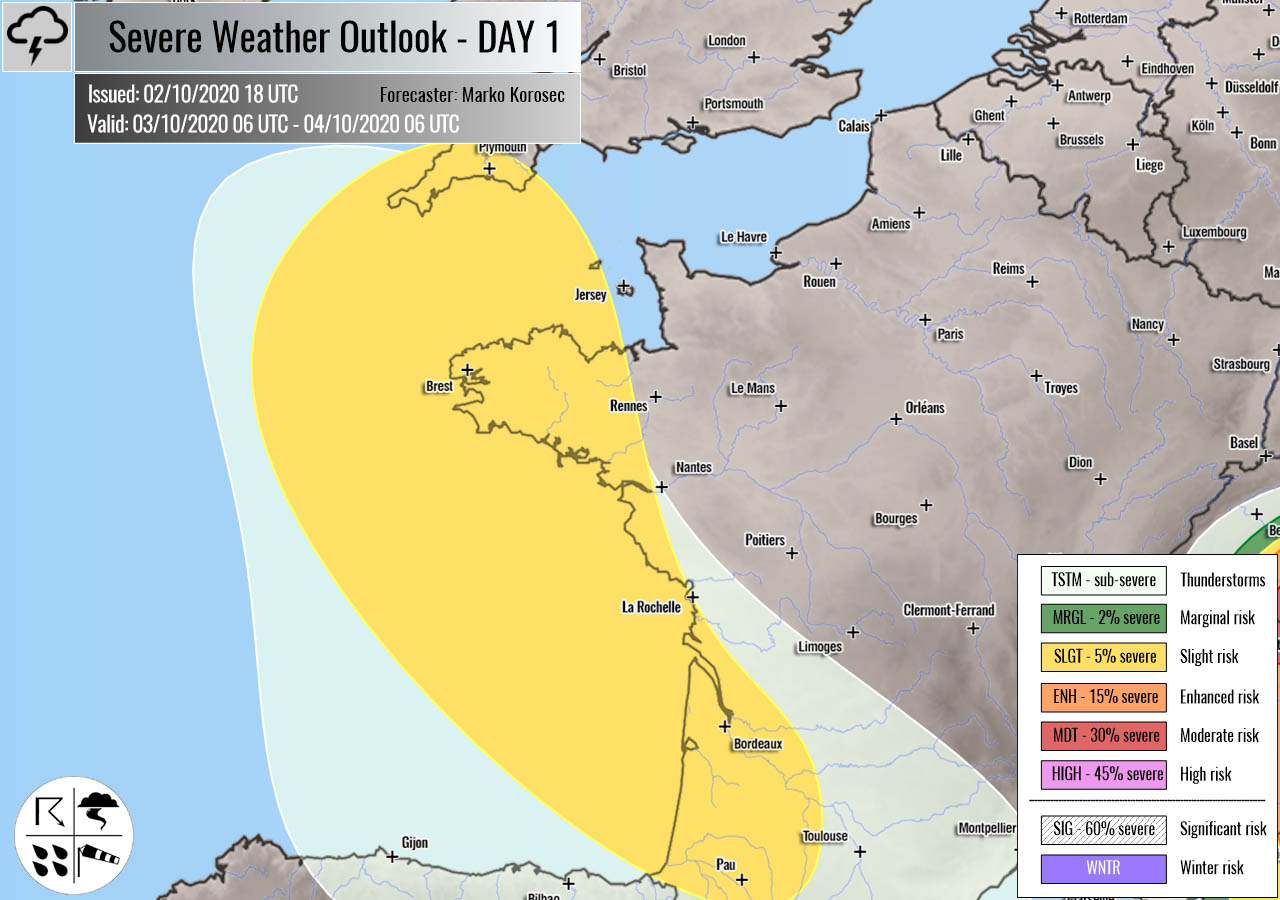 SLGT risk has been issued for southwestern England into western and southwestern France with a threat for severe winds.

The wind threat is associated with a storm Alex, centered over northern France. A tight pressure gradient across the western side of the large depression should bring peak gusts locally in excess of 100 km/h.

Heavy rains should also develop across southern England into northwestern France, with gusty squalls possible. 50-100 mm of total rain will locally be possible.

See the initial Mesocale Discussion about Alex: An intense storm Alex is now forecast to strike Brittany and England with severe damaging winds on Friday

TSTM risks have been issued for Poland and Georgia with a threat for daytime driven storms. Limited shear is present, so the storms should remain sub-severe.