A dangerous surface low – storm Alex – is expected to develop over the Bay of Biscay on Thursday. While moving towards France, it begins rapidly intensifying in the evening hours and introduce a hurricane-force winds threat across Brittany, the English Channel, and southern England overnight to Friday. Damaging winds and local flooding can occur.

Some strong winds should also reach Ireland and Wales.

Very heavy rainfall will spread across the area with a risk of flooding, as well as strong to gale force winds along with coastal areas. The rain is set to diminish by late Saturday into Sunday.

Heavy rain overnight Thursday into Friday morning will turn heavier and more persistent through Friday morning, while the east-northeast winds will be increasing. Alex will remain deep near 970 mbar low while moving across northwest France into the English Channel.

Storm Alex should bring wet and windy weather across Ireland, Britain, and France during the rest of this week, including some storms and heavy downpours and local flooding.

The general pattern over Europe reveals that there is an upper-level ridge strengthening over northern Europe and northwestern Russia. While another strong upper ridge persists over the Azores and North Atlantic.

In between these large scale features, a fast-developing deep upper-level low enters western Europe. At the surface, an associated surface low forms over the Bay of Biscay and begins rapidly intensifying from the late afternoon hours onwards. 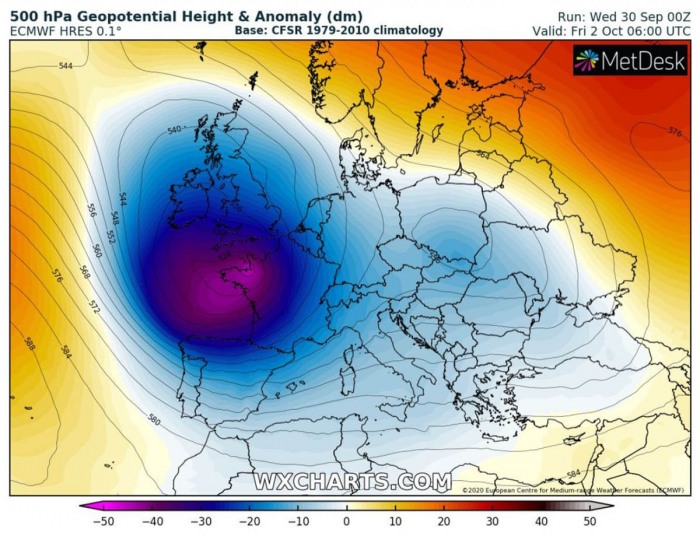 Storm Alex continues its rapid intensification while it travels across the Brittany region and towards the English Channel. The central pressure will continue deepening until Friday morning.

By Friday morning, Alex stalls over the Channel and slowly begins its retreat back south-southwest. Storm moves back into northwestern France on Friday.

Over the weekend, storm Alex vanishes moving into France while the upper-level low remains very deep and quite large. This pattern dominates the whole of western Europe while its frontal system also affects central Europe through the rest of this week.

Thunderstorms, including some severe storms and excessive rainfall threat, are likely to develop over the northern Mediterranean and the Alps from Friday to Sunday. 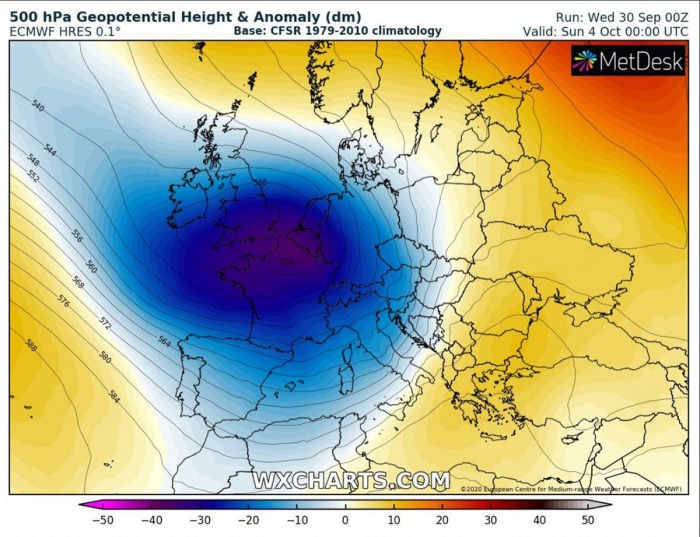 The rapid intensification of the low

The rate of intensification for storm Alex is forecast to be very high. While the low begins developing over the Bay of Biscay, weather models are hinting its central pressure will be around 983 mbar by Thursday 18 UTC (evening).

The explosive cyclogenesis and the most rapid strengthening is expected through the evening hours. 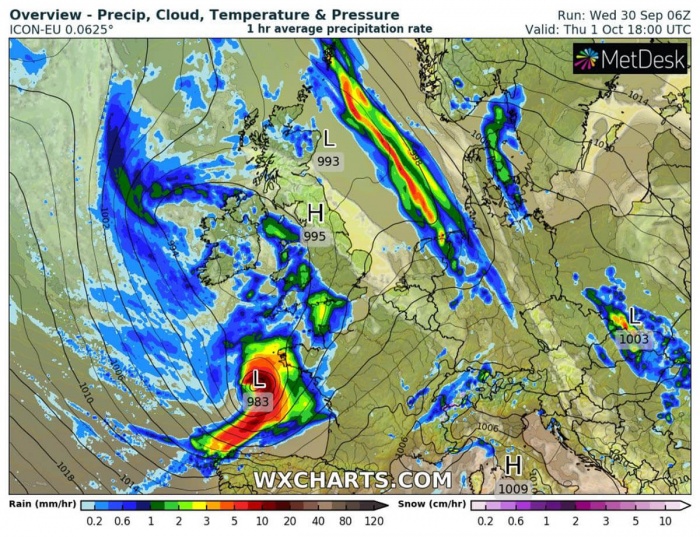 In the late evening hours, Alex should already reach around 970 mbar. That means more than 12 mbar through the 6-hour period from Thursday 18 UTC to Friday 00 UTC (early Friday). The storm will develop very intense rainfall and violent winds, as a tight pressure gradient is expected. 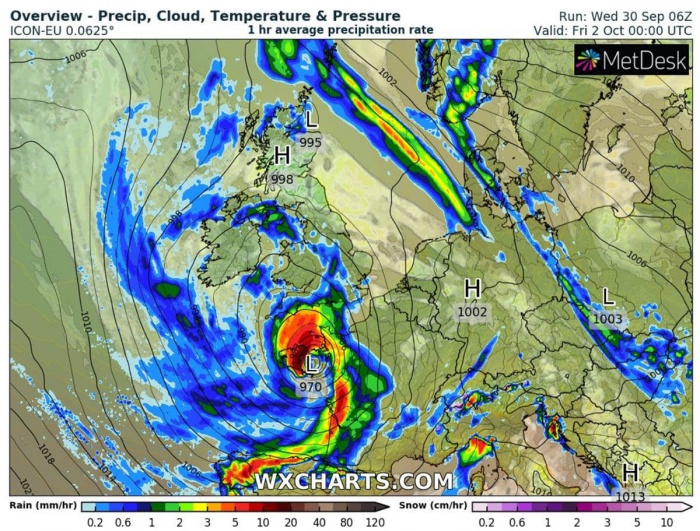 Alex continues deepening through the Friday morning hours while the storm drifts north-northeast and reach the English Channel. Some weather models are hinting its central pressure could even reach around 965 mbar by 06 UTC (Friday morning). 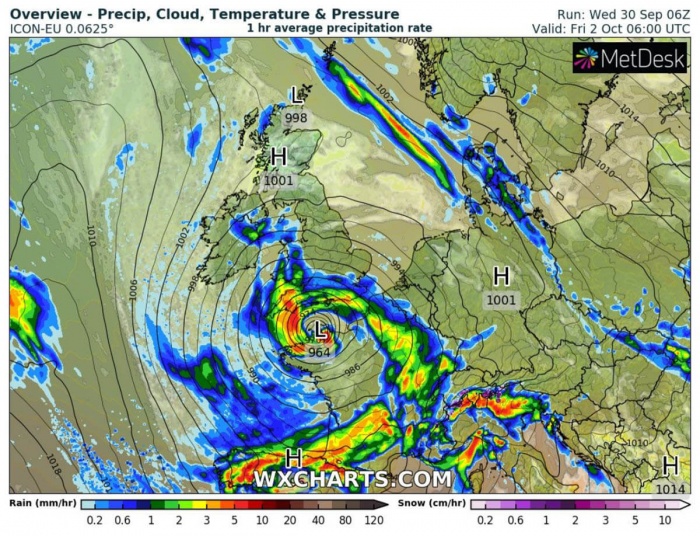 Nevertheless, a tight pressure gradient remains, resulting in very intense rainfall around the center of the low. And indeed violent winds!

Video animation includes the forecast maps by the AROME model, indicating a potential developing sting-jet over the Bay of Biscay. Violent, hurricane-force winds would strike the southern coast of Brittany region, France.

A textbook appearance of the cyclone’s evolution is also seen on the attached precipitation maps in the animation.

Storm Alex is set to begin the rapid intensification phase by Thursday afternoon, moving across the Bay of Biscay. While the central pressure of the low will be falling rapidly, violent winds are expected to develop. 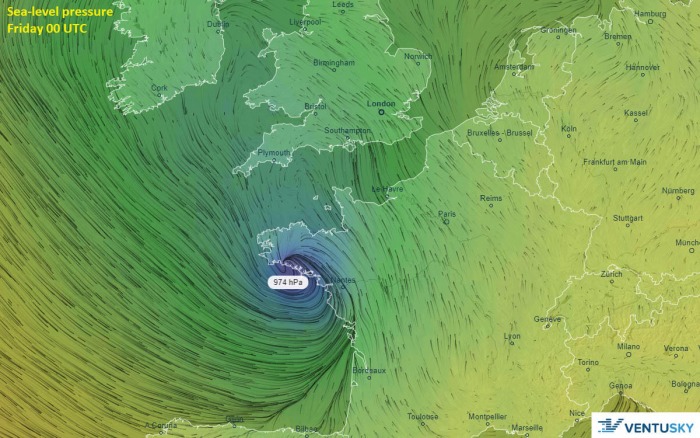 AROME model is even hinting a possible sting-jet wind maximum developing prior to the low’s center reach Brittany. Gusts could well exceed 150 km/h in a narrow swath near the center. 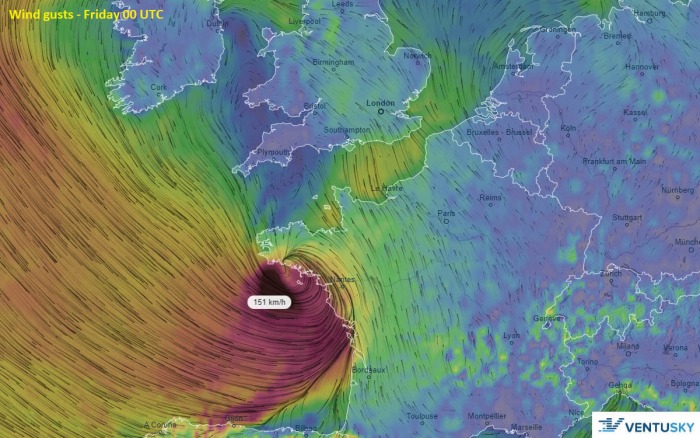 Alex should cross northwestern France overnight and reach the English Channel on Friday morning. Then, its center stalls, and the central pressure should stop falling. It is likely to pressure will reach near 970 mbar or even lower. 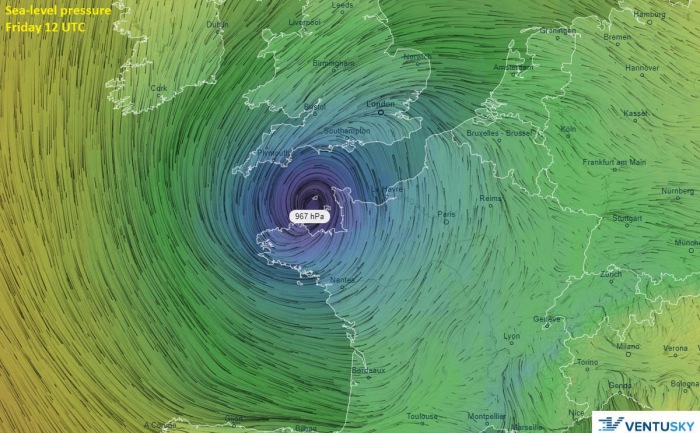 Severe winds will affect both south-southwestern England and northwestern France on Friday morning when the center will be over the Channel. Gusts seem to remain in excess of 100 km/h.

The gradual weakening process should start during the day as the cyclone drifts back towards the souht-southwest. 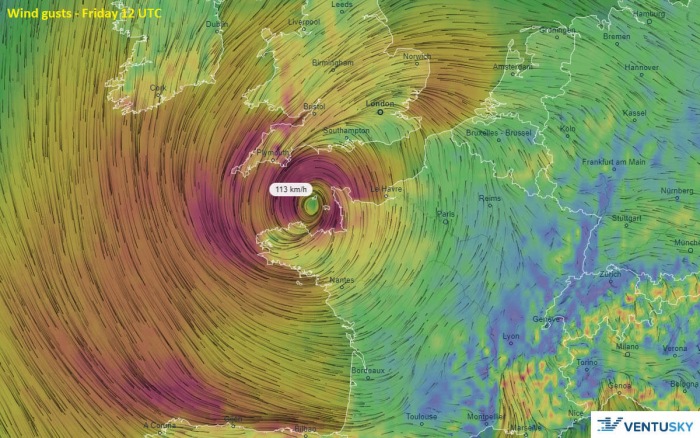 Through Friday night, Alex will turn south-southeast and weakening while moving into western France. However, its central pressure should remain below 980 mbar until Saturday morning. 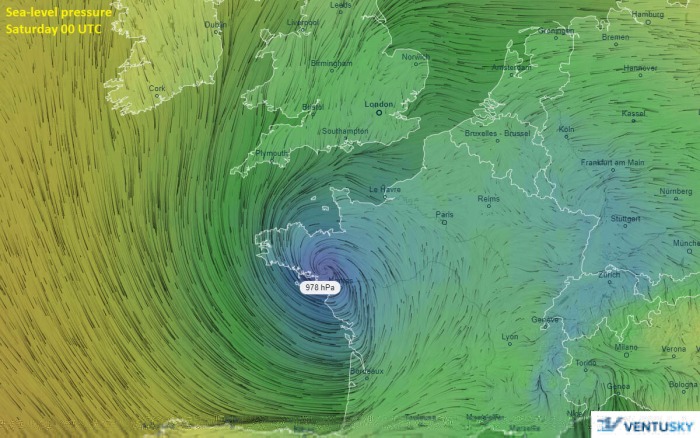 But its wind field will expand and will be less intense as during its earlier stages. The strongest winds should be limited for the eastern Bay of Biscay and coastal western France. Locally 90-110 km/h will be possible. 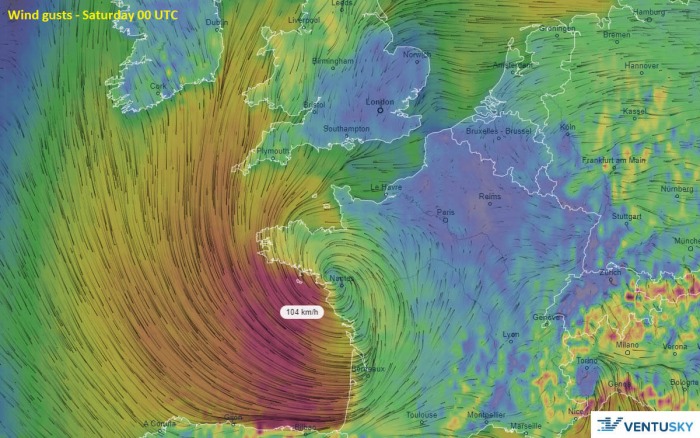 Storm Alex could bring very intense winds due to its rapidly developing process. Violent, hurricane-force winds reaching near 150-160 km/h are increasingly likely to develop across the northeast part of the Bay of Biscay into extreme northwest France.

While severe to locally extremely severe winds between 100 and 130 km/h are also possible along the storm’s track across Brittany into the English Channel through Thursday night.

The surface low will remain very deep and intense until it reaches the Channel on Friday morning. 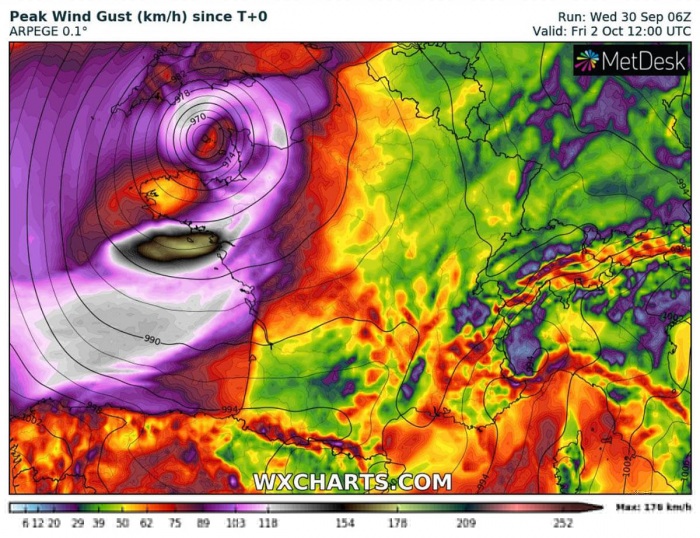 Both ARPEGE and also ICON-EU high-resolution models are in a very good agreement there is an increasing potential for hurricane-force wind gusts to develop south the southern coast of the Brittany region.

An excessive amount of rainfall is expected along with the core of Alex. A very tight pressure gradient will also introduce intense rainfall which should result in high rainfall sums. The highest accumulations are expected across the Brittany region, northwestern France. 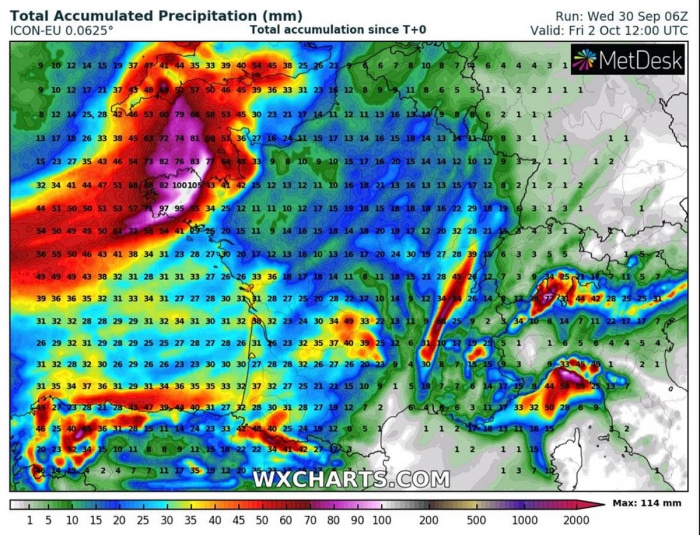 Here is a rainfall total map zoomed in over England, 50-80 mm of rain could accumulate by Friday afternoon across the southern parts. Flooding can locally occur. 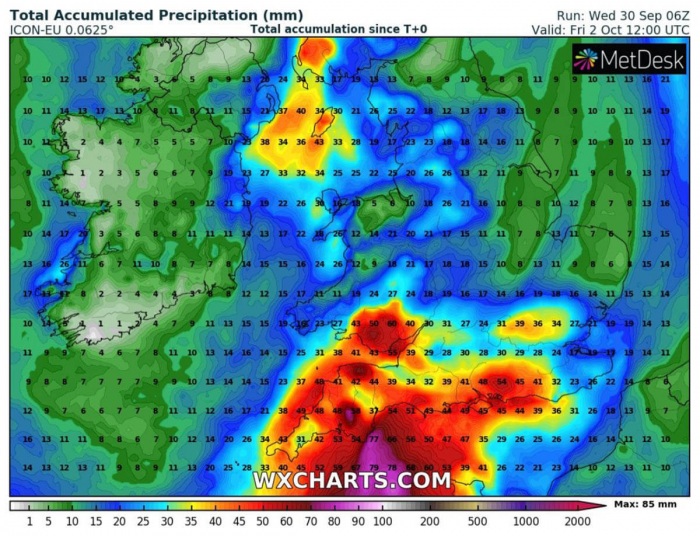 Severe winds and flooding warnings are in effect through Thursday night into Friday morning. For this reason, a Moderate (MDT) risk has been issued! 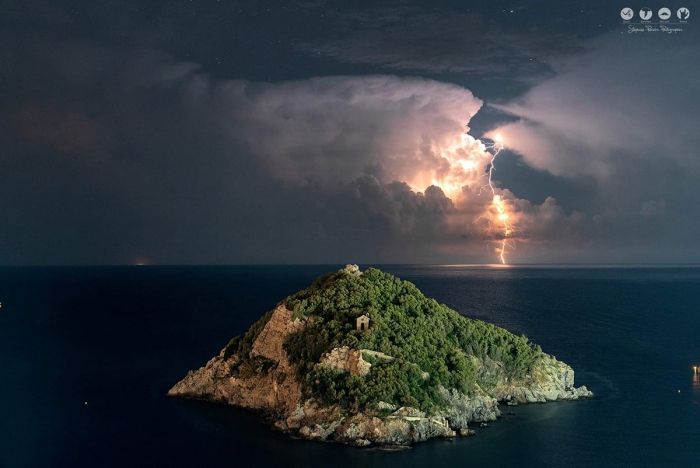 Stay alert for severe damaging winds along the path of Alex!

Back in late August, a violent Atlantic storm Ellen hit Ireland with violent winds. Ellen was, before hitting Ireland, classified as a bomb cyclone.

Such cyclone is characterized by a very rapid intensification led by the explosive cyclogenesis process. In such systems, the air pressure drops by more than 24 millibars in the 24-hour period. Storm Ellen has a remarkable pressure drop of nearly 30 mbar.

Ellen’s impact was the worst over Ireland, while severe winds also spread across Northern Ireland, Wales, southwestern England, and Scotland.

Destructive winds up to 180 km/h were reported just off the coast of southern Ireland!