Widespread severe storms, including supercells with a threat for large hail, severe winds, and torrential rainfall are expected across parts of northern Italy across Austria and Slovenia towards Czechia and Slovakia on Monday. Another area for severe storms is along the shallow front across northern Germany. 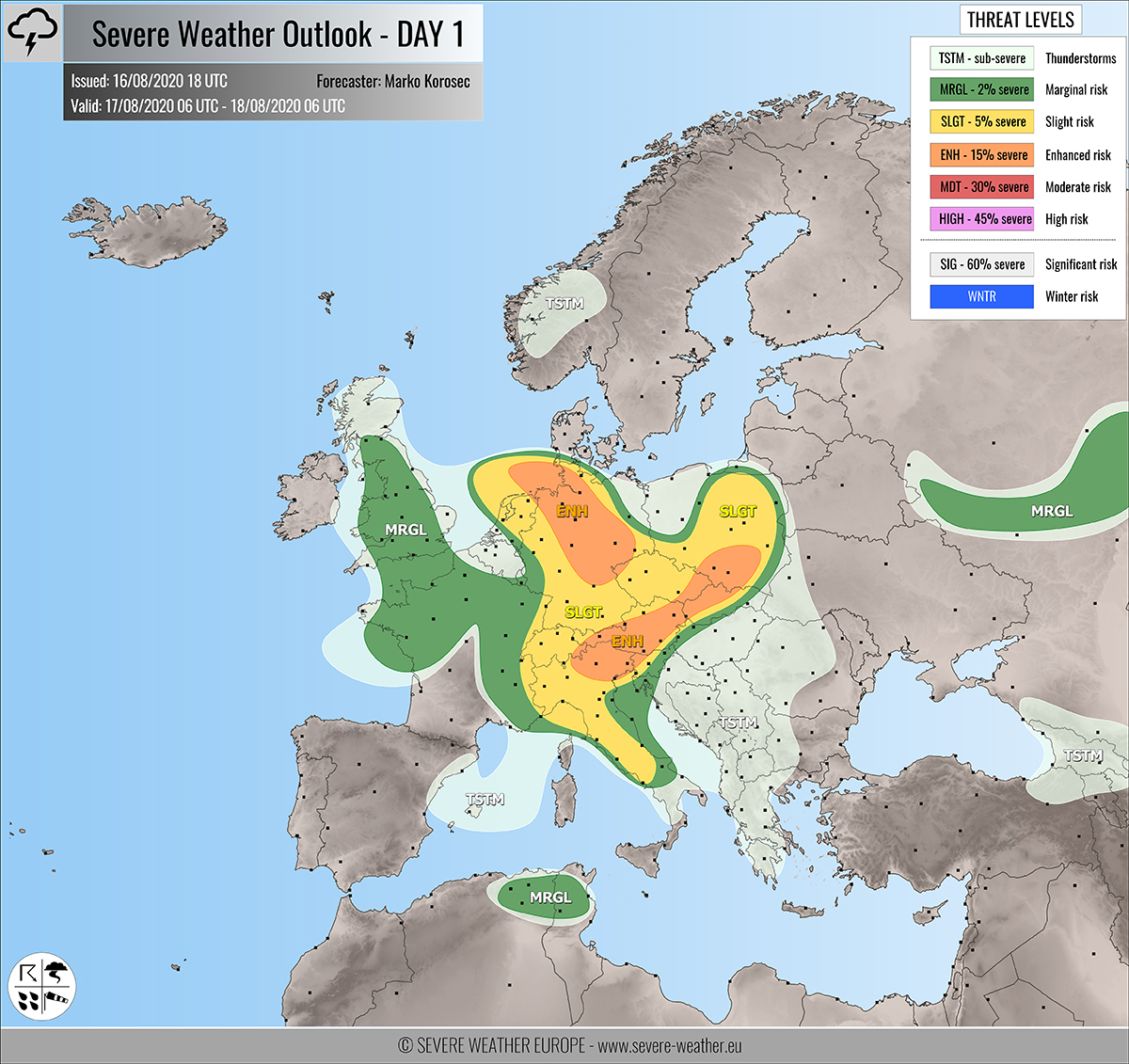 An upper ridge over western and northern Europe is collapsing while a large upper low over the North Atlantic significantly strengthens. An upper low over France opens into a long-wave trough and spreads towards central Europe. A large trough over western Russia pushes a surface frontal system towards the south. 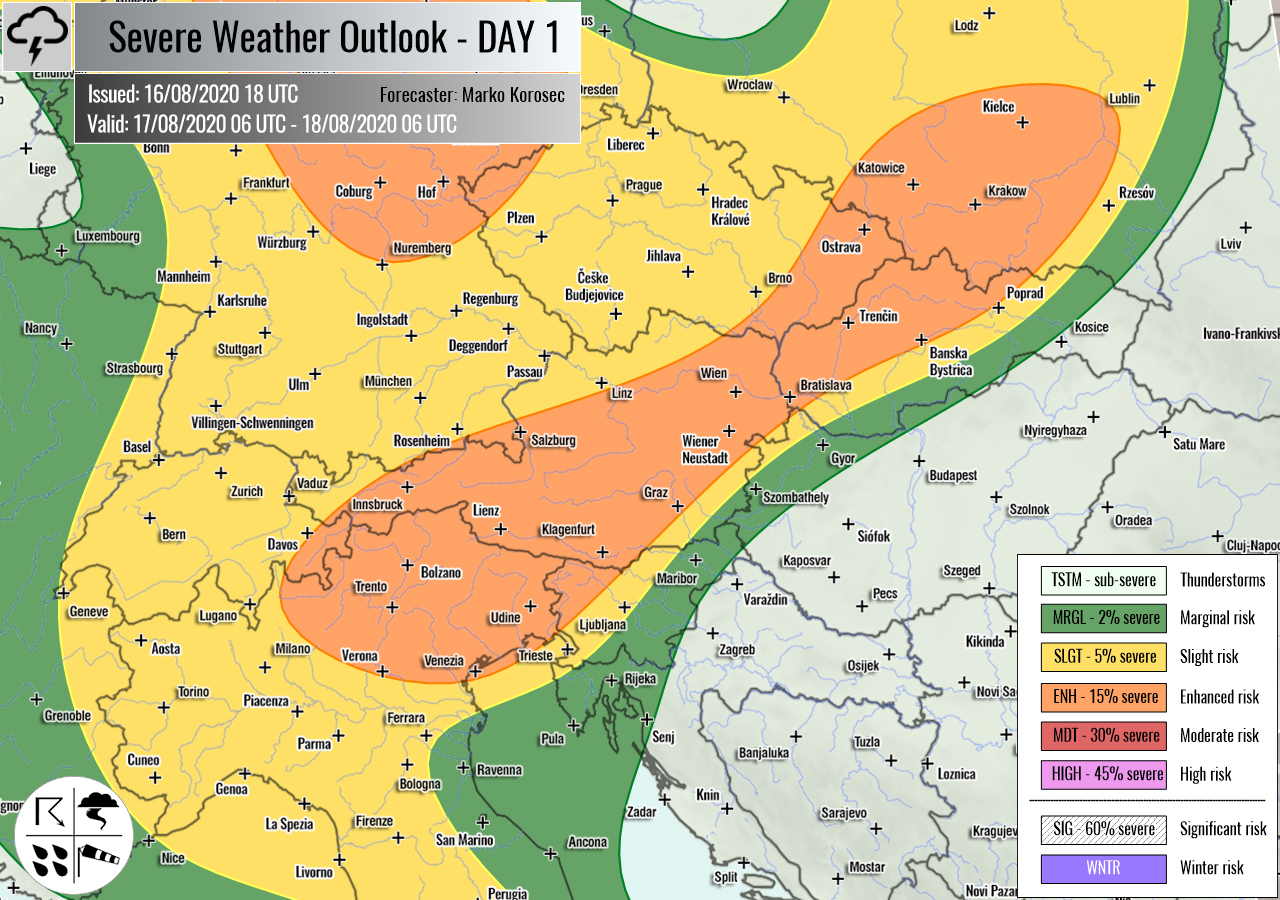 A short-wave moving from west to east will be the main focus for convective initiation during the afternoon and evening hours. Moderate to locally strong instability is present, coupled with marginal to moderate shear. Shear is higher over Slovenia and north Italy.

Organized storms, including a few supercells are likely to form by the afternoon, gradually growing while moving towards the east-northeast. Large hail and severe winds are possible with the most intense storms. High moisture should also contribute to torrential rainfall and locally flash floods.

Very low shear but strong instability will be particularly supportive of flash floods from eastern Austria across eastern Czechia and western Slovakia into southern Poland. Widespread storms are expected there.

Storms are likely to merge into a large cluster or two over the Alps in the evening hours and continue overnight towards Slovenia and southern Austria. 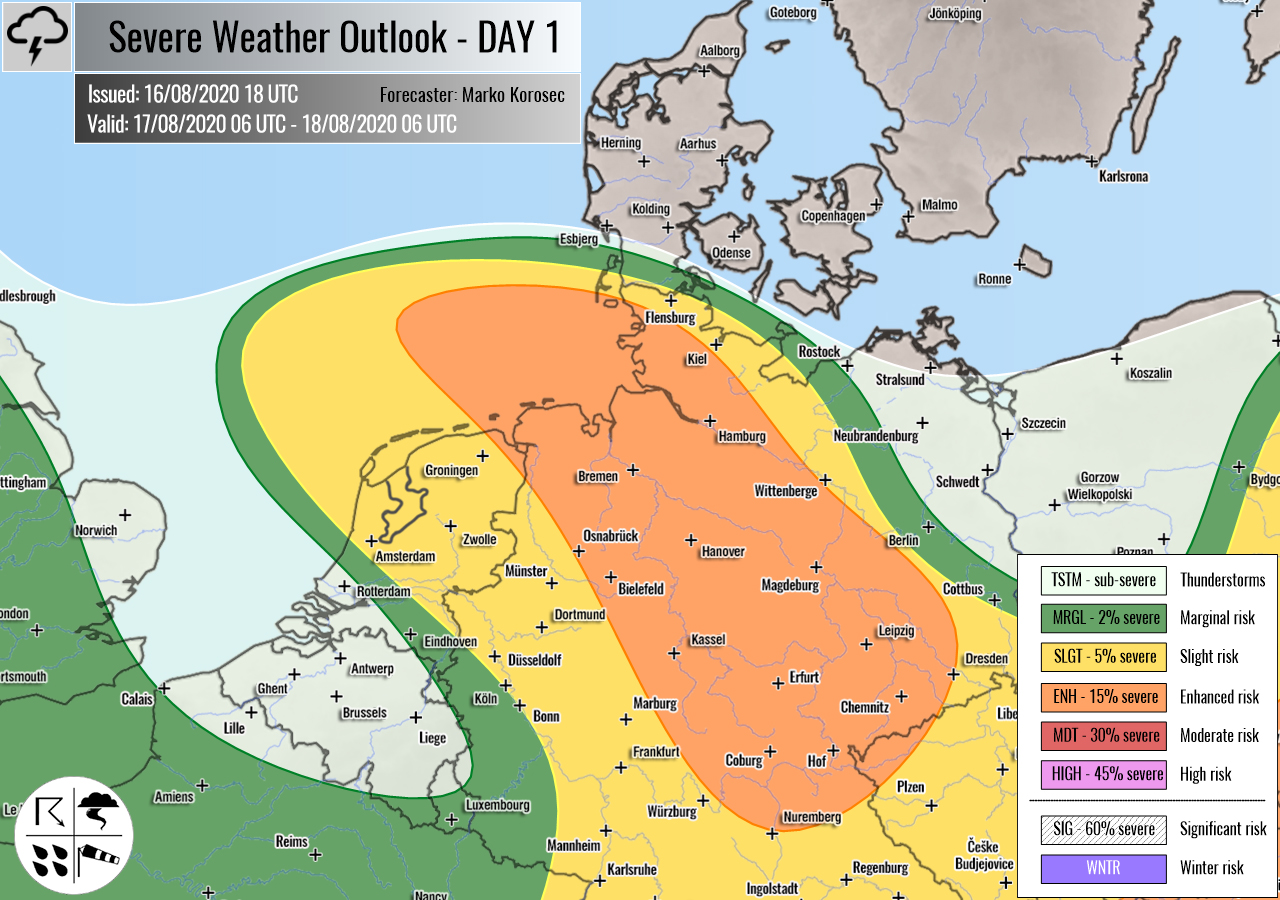 ENH/SLGT risks have been issued for north-central Germany, the Netherlands with a threat for severe storms, capable of producing severe winds, marginal hail, and torrential rainfall with flash floods.

A decaying surface front will continue moving towards the northeast and support additional storms from the afternoon into evening hours. Moderate instability remains, but the shear weakens. However, favorable forcing should allow numerous storms to form along the front, including intense multicells. Marginal hail and severe winds will be possible, but also torrential rainfall and locally flash floods threat.

MRGL risk has been issued for England into southern Scotland and France under the cold air aloft, allowing a few isolated storms to form. A marginal threat for some large hail and heavy rainfall exists.

MRGL risks have been issued across northeastern Algeria into northern Tunisia and across western Russia where some isolated severe storms are possible. Mainly with a threat for large hail and severe winds.

TSTM risk areas have been placed across southern Norway, the Balkans, western Mediterranean and Georgia with a threat for daytime driven storms. Limited shear is present, so the storms should remain sub-severe.

Share on TwitterShare on RedditShare on FacebookShare on PinterestShare on WhatsApp
Destructive derecho hit Midwest, US - Iowa damage size of nearly 70% of Ireland
← Previous
An unseasonably strong extratropical cyclone (ex storm Kyle) will blast into Ireland and the UK
Next →
Comments are closed.