A severe weather outbreak is expected across parts of central Europe this Saturday, as a strong to locally extremely unstable and sheared environment combine together.

A HIGH risk has been issued for parts of the northern Mediterranean to cover the potential threat where the most intense severe storms, capable of producing giant hail and severe destructive winds will develop.

A large mesoscale convective system (MCS) with destructive winds and wind-driven large hail will likely form through Saturday night racing across Italy into Austria and Slovenia towards Sunday morning.

Above: Video animation of the convective storm’s development across Europe from the Saturday morning through the Sunday morning, July 31st to August 1st, 2021.

This Saturday, a progressive pattern develops over Europe, with dangerous severe weather moving across central Europe and the Alps, as well as over eastern Spain. Two large upper troughs/cores will dominate western, northern, and southwestern Europe, while a strong ridge remains over southeastern Europe.

In between the large troughs and the high, a strong southwesterly jet stream is spread across the Alpine region and the northern Mediterranean. Providing a large-scale forcing over the highlighted regions.

At the surface, a well-defined cold front is moving east across central Europe, curving from the large surface low over Scandinavia towards southwest. The frontal boundary will be moving from west to east extending from Poland across the Alps into southern France and eastern Spain. A shallow surface low develops over northern Italy.

Note: Under the persistent blocking High in the Balkan peninsula, an extremely intense heatwave is underway. Temperatures are nearing 44 °C and are expected to continue today and also in the coming days. 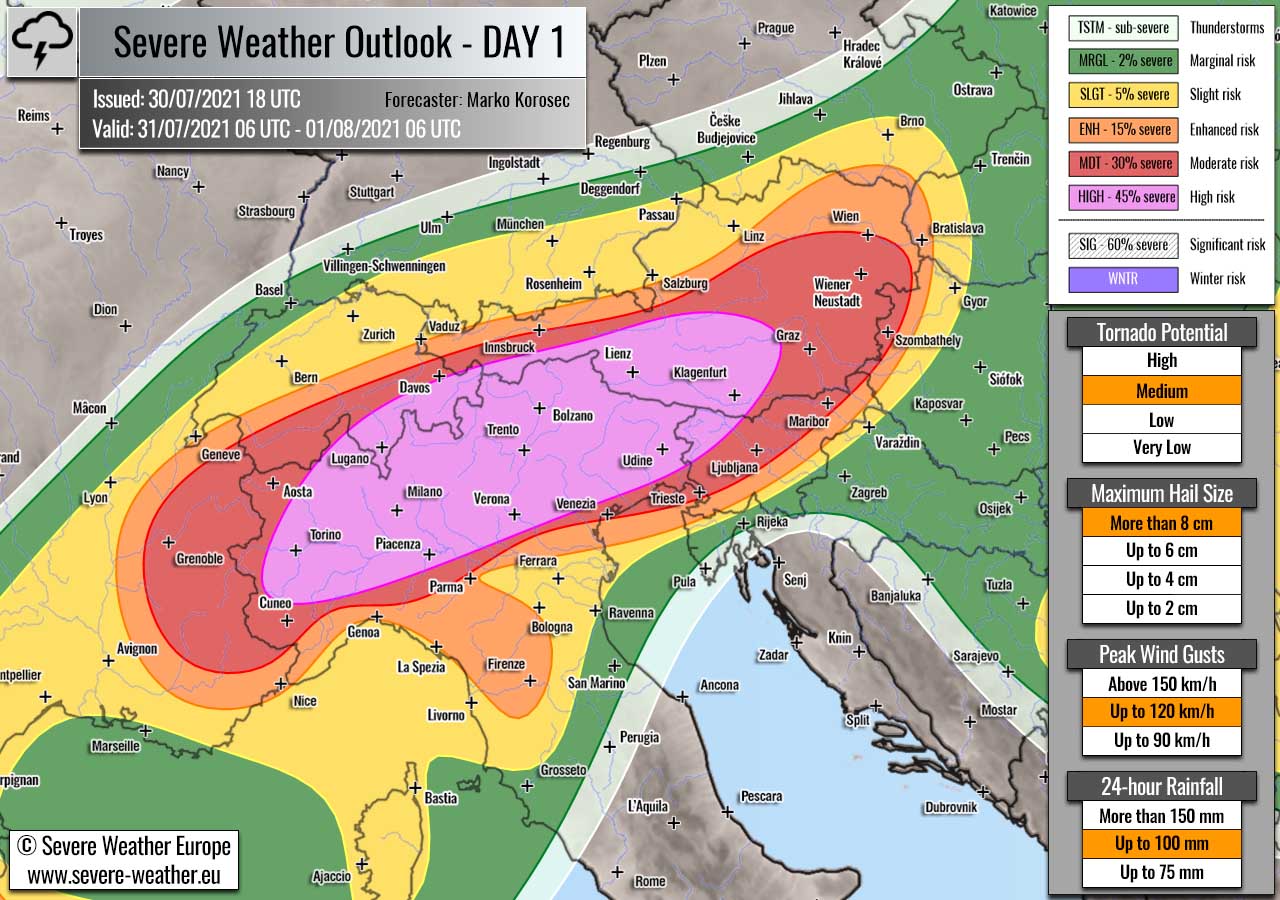 HIGH risk has been issued for parts of northern Italy across southern Austria into northern Slovenia with a threat for severe destructive winds, very large to giant hail, torrential rainfall with flash floods, and tornadoes.

MDT/ENH/SLGT risks have been issued for areas surrounding the HIGH risk area across parts of Switzerland, northern Italy, Slovenia into northwestern Hungary with a threat for severe and potentially destructive winds, large to very large hail, torrential rainfall, and low tornado threats. Coverage will be lower than inside the HIGH risk area.

The upper-level forcing will be favorable to support widespread convective activity, starting in the morning hours as the upper trough emerges from the west. During the day, the activity will gradually expand east into the unstable air mass building up with the strong diurnal heating across northern Italy and the Alps.

Strong to locally extremely unstable air mass will develop, especially across the north Italian plains. MLCAPE from 2500 J/kg to near 4000 J/kg will likely accumulate, providing a volatile setup for the explosive development of severe thunderstorms.

Combined with favorable forcing within the left-exit jet region aloft, storms will organize and rapidly increase in coverage and intensity, fueled by high/extreme instability and strong 40-60 knots deep-layer shear. The primary storm modes will be long-lived supercell thunderstorms, thanks to favorable wind profiles.

Intense supercell storms are expected to produce very large to locally giant hail, with hailstones between 5-8 cm or possibly even more with the most robust cores. Fast-moving supercells will also enhance the risk for destructive winds, being locally combined with wind-driven large hail.

Besides discrete supercells from the mid-afternoon onwards, another concerning threat is a very high potential for severe destructive winds as storms merge into a large cluster along the Southern Alps towards the evening hours. A large MCS (Mesoscale Convective System) is expected to track east with a fast forward speed.

This increases the threat for destructive wind gusts reaching up to 120 km/h across northeast Italy into northern Slovenia and southern Austria, mainly along the leading edge of the eastward-moving MCS.

The HIGH risk has been issued for the areas where these conditions seem to best overlap and produce damage with life-threatening conditions possible. Violent winds with wind-driven hail can be destructive in places, especially across northern Italy where shear and extremely unstable air mass will align together. As well as with the most intense storms with then nocturnal MCS.

A severe squall-line could result in numerous downed trees as well as damage to the powerlines Saturday night while the MCS continues east along the southern Alpine rim. Thanks to increasing winds in the evening and night hours, the large cluster should travel a long distance towards the east.

These winds will also increase the wind shear and helicity in the lowest levels across northeast Italy, enhancing the tornado potential with the discrete supercells storms before the activity merges into the large convective complex. A tornado or two cannot be ruled out.

Training cells with torrential rainfall and flash floods are also expected in the mountainous terrain of southern Alps, from southeastern Switzerland to northern Italy, and across northwest Slovenia and southern/western Austria. Up to around 100 mm are likely in some areas, potentially even more if cells could maintain over the same areas for longer.

Activity is expected to continue until the Sunday morning as instability and shear, despite some nighttime capping, remain in place along the leading edge of the MCS to its south and east. 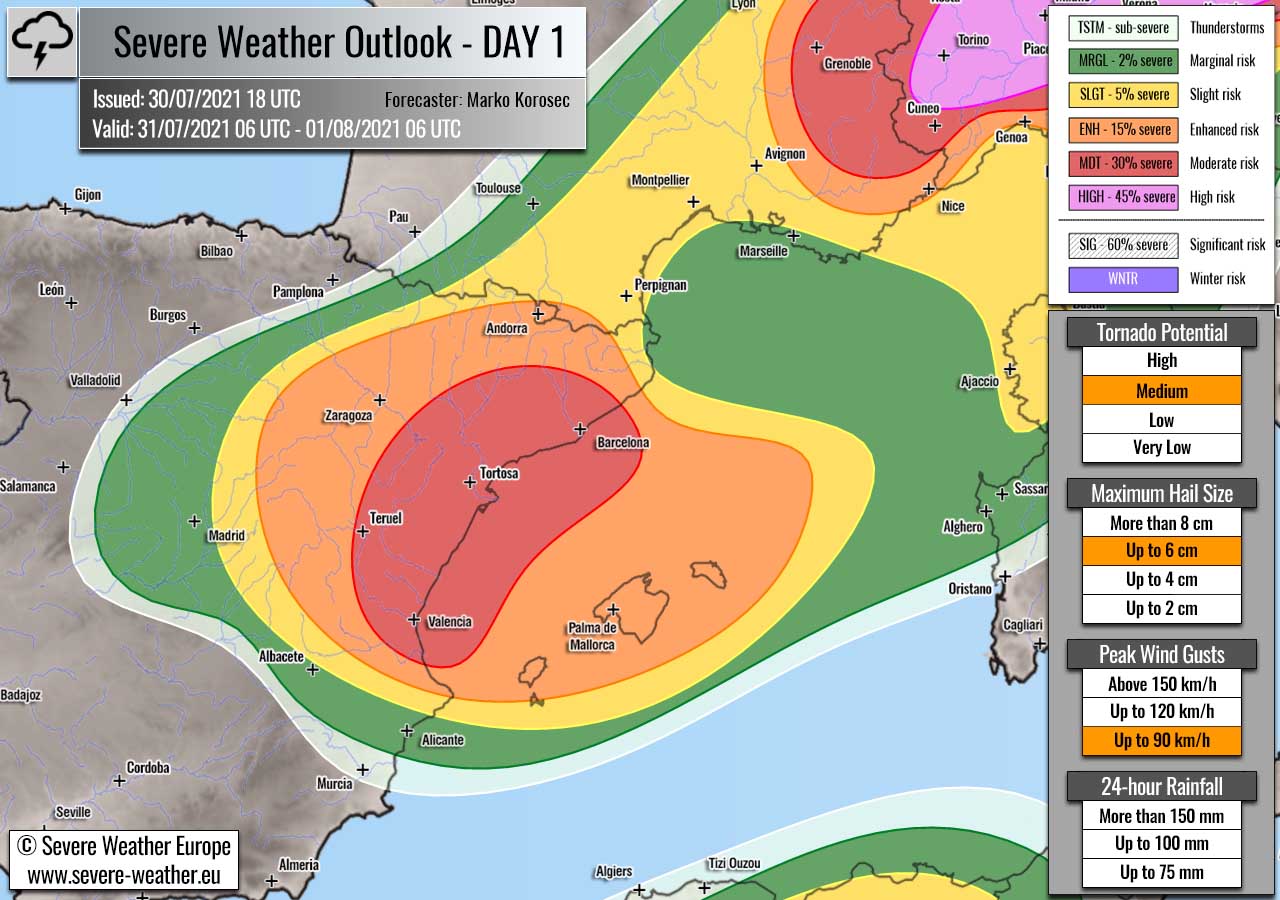 MDT/ENH/SLGT risks have been issued for eastern and northeastern Spain into western Medtierranean with a threat for large to very large hail, severe winds, and some tornado threats.

A sharp upper wave will push across the northern part of the Iberian peninsula during the day, providing a significant forcing for isolated to scattered storms to develop. Thanks to the very moist air mass across the western Mediterranean, strong instability of more than 2000 J/kg of MLCAPE will be in place.

With the strong mid-level jet rounding the trough axis to its south, ample deep-layer shear (50-60 knots) will overspread the high instability beneath. This should be more than enough to support a rather explosive development of severe thunderstorms, including supercells.

Large to locally very large hail will be the primary threats, while also heavy rainfall and severe winds will be possible across the MDT risk area. Some tornado threats will also exist, thanks to quite strong low-level shear along the northeast Spanish coast.

ENH/SLGT risks were extended east across the western Mediterranean, including the Balearic Islands as upscale growth of the storms is likely through the mid to late afternoon hours. Severe winds and large hail, together with heavy rainfall will push quite far east, especially if a strong MCS develops.

Thunderstorm activity will be gradually losing its strength in the evening hours as strong capping develops over the Mediterranean and limits the convective support for the ongoing storm cluster.

SLGT risk has been issued for western parts of Latvia and Lithuania with an isolated threat for severe thunderstorms, capable of producing severe winds, marginal hail, and some tornado threats.

An occluded front, associated with the deep surface low over southern Scandinavia will serve as the main trigger for severe storm formation. While instability should be rather marginal, moderate shear will help to rotate the storms.

A few stronger storms could bring some hail and severe winds, while given the enhanced low-level wind shear a tornado is not ruled out either. Especially as the Baltic Sea is much warmer than normal this summer.

Storms will gradually diminish towards the evening hours as instability vanishes.

SLGT risk has been issued for western Russia where some isolated to scaterred severe thunderstorms are possible along the eastward moving surface cold front. Moderate shear and instability could lead to large hail and severe winds.

SLGT risk has been issued for northern Algeria where an isolated threat for severe thunderstorms exists. Diurnal heating could breach the cap and a few storms could develop in a moderately unstable and sheared environment. Isolated large hail and severe winds will be possible. 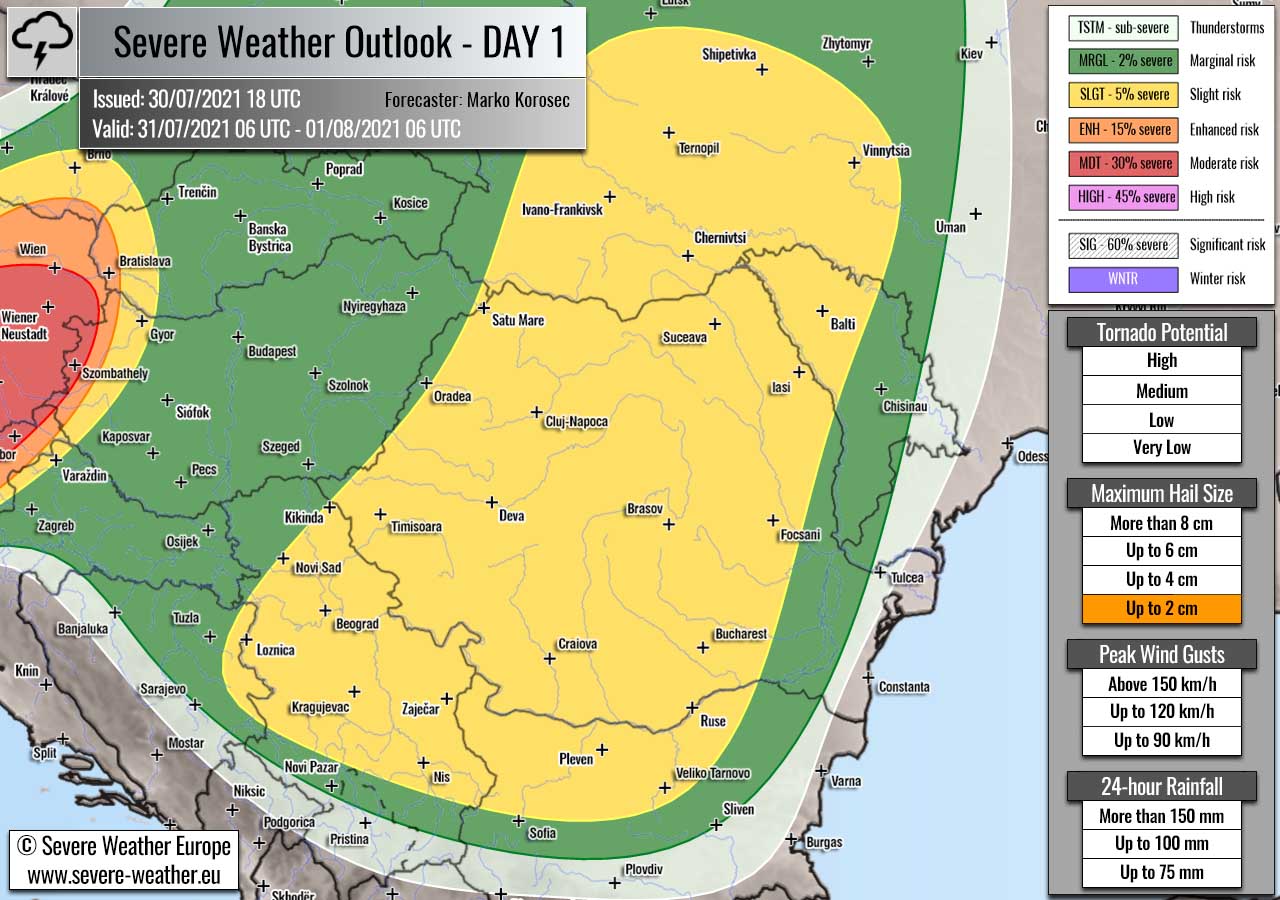 SLGT/MRGL risks have been issued for areas across Balkan peninsula into parts of eastern Europe as threat for daytime-driven thunderstorms exists. Although the shear will be rather limited and only marginal, strong instability could lead to some large hail and torrential rainfall with slow-loving storms.