A HIGH risk has been issued across the eastern Alpine region further northeast across Slovakia into southern Poland and surroundings to cover a particularly dangerous threat where the most intense severe storms will develop.

Another focus is the frontal zone moving northeast from the eastern Baltic region into northwestern Russia where severe storms are also likely to form during the day.

Above: Video animation of the convective storm’s development across Europe from Sunday early morning through the Monday morning, Aug 1st to 2nd, 2021.

A progressive pattern has developed over Europe this weekend, with a dangerous 2-day severe weather outbreak moving across central Europe and the Alps into eastern Europe. On Sunday, a large long-wave trough pushes further east with three deep cores – one over Scandinavia, over Denmark, and the most potent one over France and the Alps.

A strong upper ridge remains over southeastern Europe, resulting in an extremely intense heatwave over the southern Balkan peninsula. Temperatures are nearing 45 °C and are expected to continue also on Sunday and in the coming days.

A powerful southwesterly jet stream is placed across the northern Mediterranean towards the Baltic region, providing a large-scale forcing and strongly sheared environment over central and eastern Europe.

At the surface, a cold front is moving east across central and eastern Europe, extending from the large surface cyclone centered over Scandinavia. The frontal boundary will serve as the main focus for explosive storm development through Sunday into Monday morning. 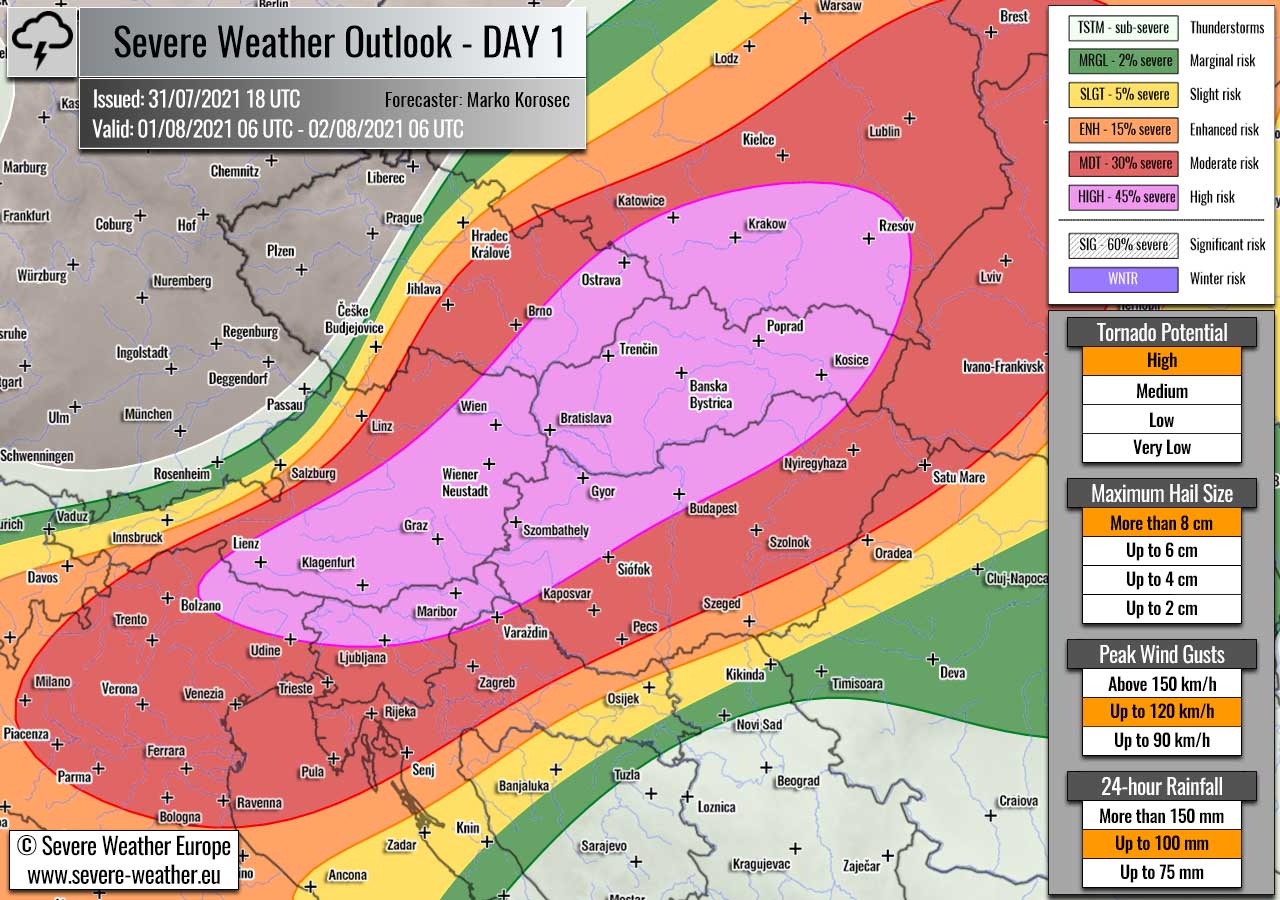 MDT/ENH/SLGT risks have been issued for areas surrounding the HIGH risk area including parts of Switzerland, northern Italy, Slovenia, Croatia, Bosnia, northern Romania, Ukraine to Belarus with a threat for severe and potentially destructive winds, large to very large hail, torrential rainfall, and tornado threats. Expected storm coverage will be lower than inside the highlighted HIGH risk area.

Ahead of the approaching frontal zone from the Alpine region, strong south-southwesterly winds are advecting very hot and moist air mass across parts of central and eastern Europe. This will lead to strong instability, with MLCAPE of 2000 J/kg to potentially more than 3000 J/kg across the HIGH risk area.

While the upper-level forcing will be more than favorable to support widespread convective activity. It is likely that the ongoing strong thunderstorm activity from Saturday night will continue across the western portions of the HIGH/MDT risks already on Sunday morning and re-intensify during the day as the wave continues northeast.

For this reason, the HIGH risk was placed across southern Austria and north-northeast Slovenia to cover the potential dangerous morning MCS threat. Further west, across Italy, additional storm activity is expected to take place as diurnal heating results in strong instability within the sheared environment.

Isolated to scattered supercell thunderstorms will develop, gradually moving east-northeast through the afternoon and evening hours. Very large hail, severe winds, and torrential rainfall are expected with the strongest storms. 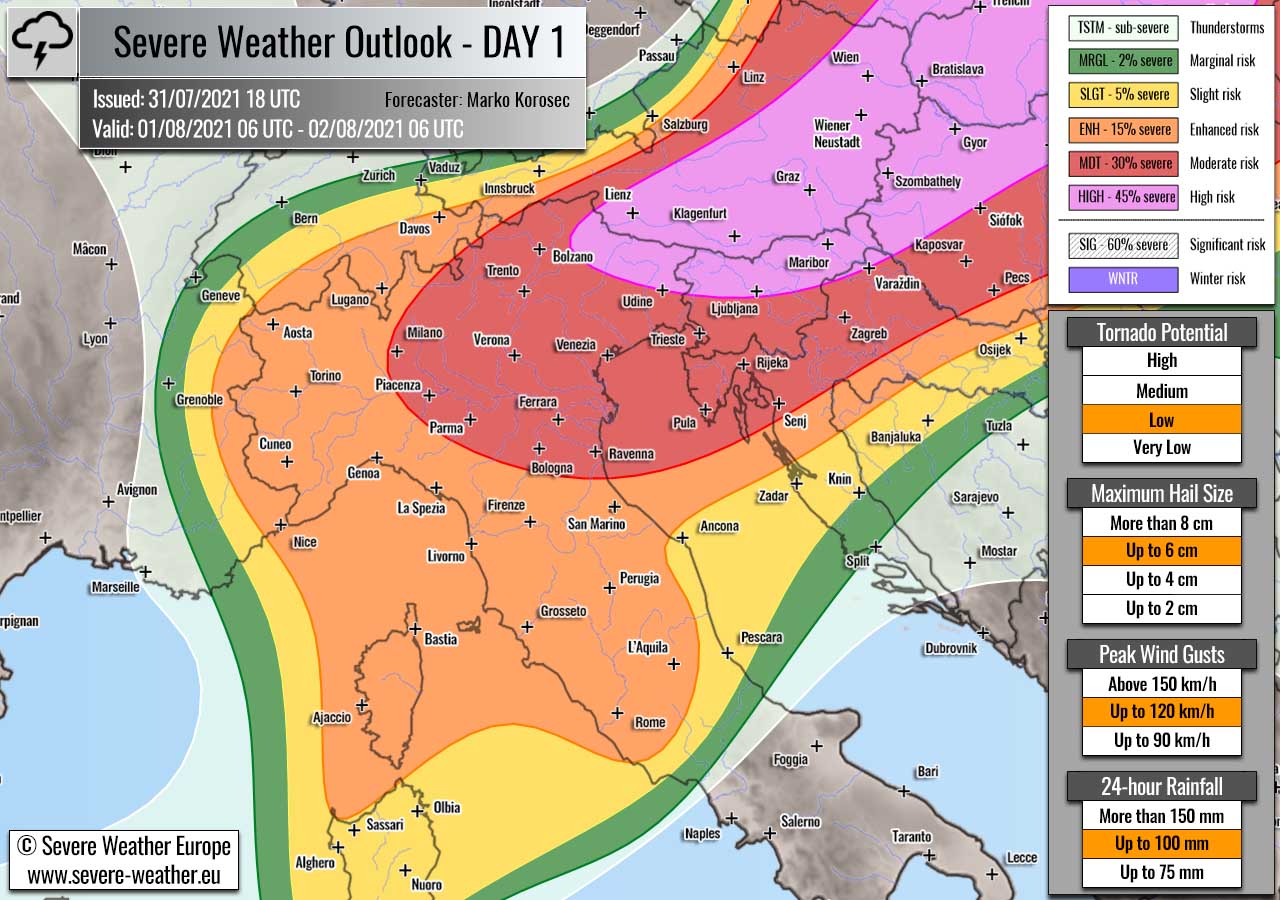 Further northeast, across the core of the HIGH risk area, strong to locally extremely unstable air mass will lead to another day of a rather volatile environment for the explosive development of severe thunderstorms. Combined with strong divergence under the left-exit jet region aloft, storms will rapidly organize into supercells once the initiation starts.

Regardless the morning MCS activity, a rapid increase in storms’ coverage and intensity will take place during the day, fueled by high instability and strong 50-60 knots of deep-layer shear. Supercell storms will be long-lived and could track across long distances, resulting in long swaths of dangerous threats across the HIGH risk area.

Intense supercell storms are expected to produce very large to locally giant hail, with hailstones between 5-8 cm, hail even larger is possible with the most robust cores. Fast-moving supercells will also enhance the risk for destructive winds, being locally combined with wind-driven large hail.

Towards the late afternoon, storms will be growing upscale and merge into a large MCS (Mesoscale Convective System), hinting at another concerning threat for severe destructive winds and wind-driven hail. The MCS would potentially be spreading east-northeast across the HIGH risk and across MDT risk further east through Sunday night. 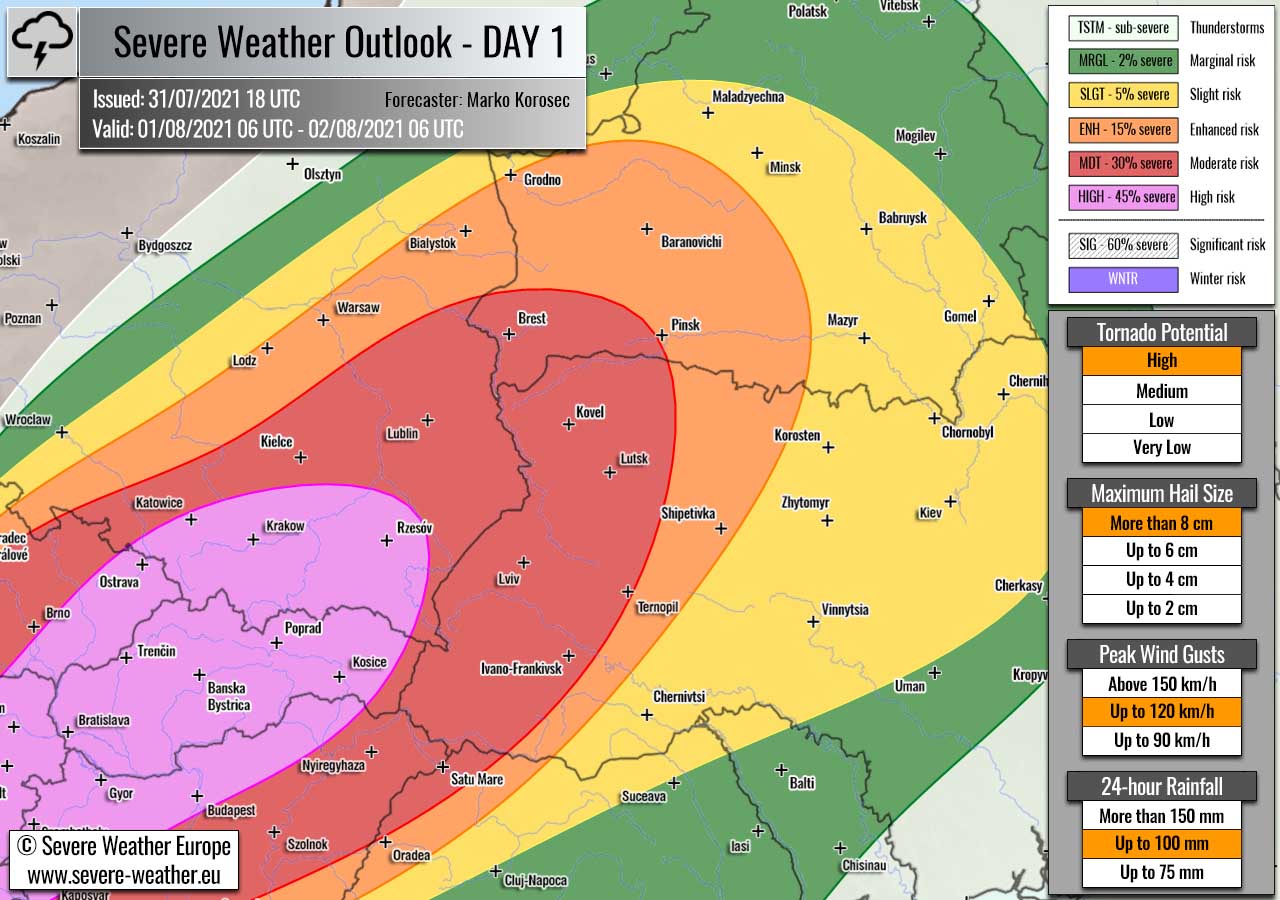 This will significantly increase the threat for destructive wind gusts reaching up to 120 km/h across Slovakia into western Ukraine and southern Poland, mainly because of the bowing segments. A severe squall-line along the leading edge of an MCS could result in numerous downed trees as well as damage to the powerlines while the MCS continues east towards Ukraine and Belarus.

Prior to the emerging storm cluster, discrete supercell thunderstorms will be taking an advantage of strong shear and helicity in the lower 3 kilometers, mainly across eastern and southern Slovakia, northern Hungary into southern Poland. This hints at a high tornado threat with any storm that will develop in this environment.

The HIGH risk has been issued for these areas where these conditions seem to best overlap and produce tornadoes, destructive winds and very large or giant hail.

Activity is likely to continue until Monday morning as instability and shear keeps fueling the large cluster as it continues further east overnight.

ENH/SLGT risks have been issued for eastern Estonia into northwestern Russia with a threat for severe storms, capable of producing marginally large hail, severe winds, and low tornado threats.

The activity is mainly expected along the eastward progress of the front, associated with the low over Scandinavia. Moderate instability with MLCAPE up to around 1000 J/kg and moderate near 40 knots wind shear could produce a supercell or two.

The strongest storms could bring some larger hail and severe winds, possibly even a tornado as enhanced low-level wind shear will be in place. Storms will gradually weaken through the evening hours as instability vanishes.

MRGL risk has been issued for southwestern Russia, eastern Ukraine and Georgia where some isolated severe thunderstorms are possible. Although shear is low, moderate CAPE could spark large hail and severe winds.

TSTM risks have been placed across Finland, Benelux, southwestern Mediterranean and eastern Turkey where daytime driven thunderstorms are likely. But limited shear should keep them sub-severe.