Iceland is a land of fire and ice. It is also a land of volcanoes and earthquakes, and they usually come in abundance.

A strong earthquake swarm is ongoing at the Fagradalsfjall mountain on Reykjanes peninsula. The swarm started yesterday (December 15th) around 8am. The strongest earthquake in the first burst was an M3.5 at around 5km depth. The image below shows the map with the location of Fagradalsfjall mountain and the surrounding towns/cities. Red lines/dots are used to mark the location of known fault zones, which have regular tectonic earthquake activity. The mountain is actually of volcanic origin, with the last eruptions here being over 12.000 years ago. 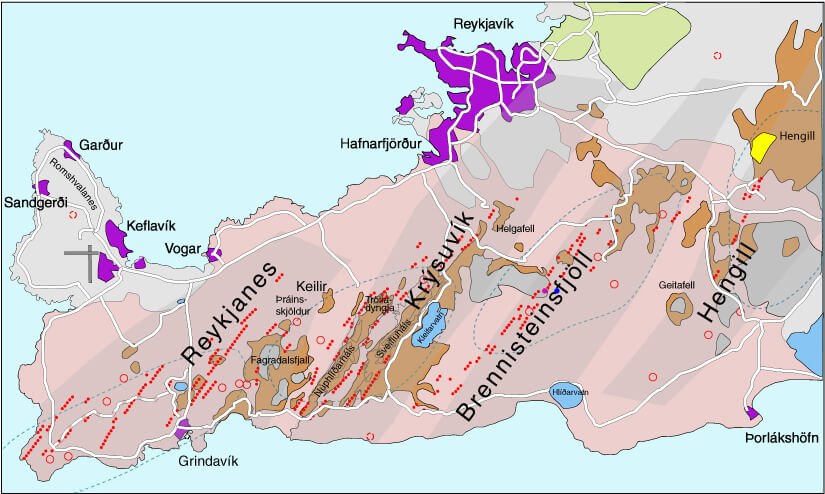 A second burst of earthquakes followed in around 12 hours. This burst was stronger, with the strongest earthquake being an M3.7 at 7:48pm, that was followed by an M3.6 just 9 minutes later. So far, a total of 10 earthquakes above magnitude 3 have been listed. Over 900 earthquakes have been detected in the whole swarm by the monitoring. IMO (Iceland Met Office) has received felt reports from Grindavík, Keflavík, Reykjavík (capital of Iceland) area and Akranes. The graphics below from Iceland Met Office show the location and progress of the earthquake swarm. 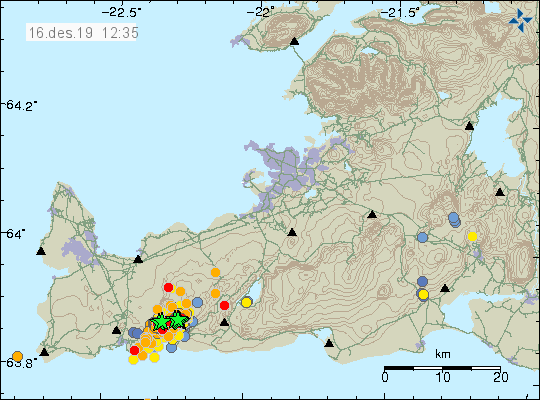 The sensitive seismic monitoring equipment has seen this earthquake swarm very clearly. The first image (from IMO) shows the waveforms from a seismometer unit near the swarm, where individual earthquakes can be seen, with stronger ones having larger spikes. On the second graphic (from IMO), we can see the monitoring grid data at a certain frequency, where it is obvious that the signal/noise from the ground cracking was very strong across the seismometers in the region. The earthquakes detected by this automated monitoring grid system, must be individually manually verified/corrected by a human specialist for depth and location errors, since the computer system has its limits when it comes to the accuracy of location. That can be a very time-consuming process during large swarms with hundreds of earthquakes to correct. 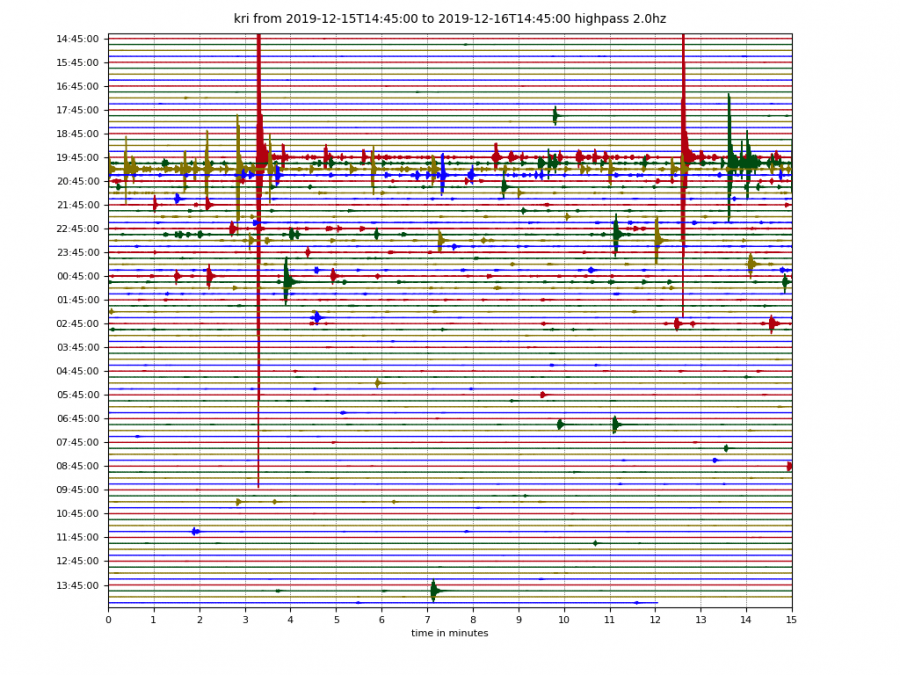 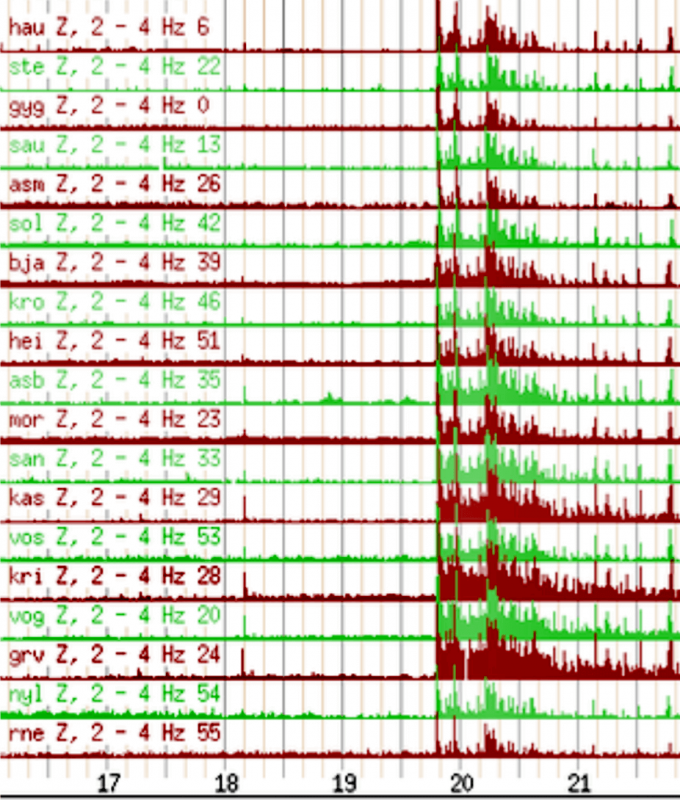 Looking at depth, the swarm is relatively shallow, with depths ranging from 2-9km down for stronger quakes. This graphic only shows the manually verified/corrected earthquakes that we mentioned above. The total number will be much higher once the whole swarm will be processed. 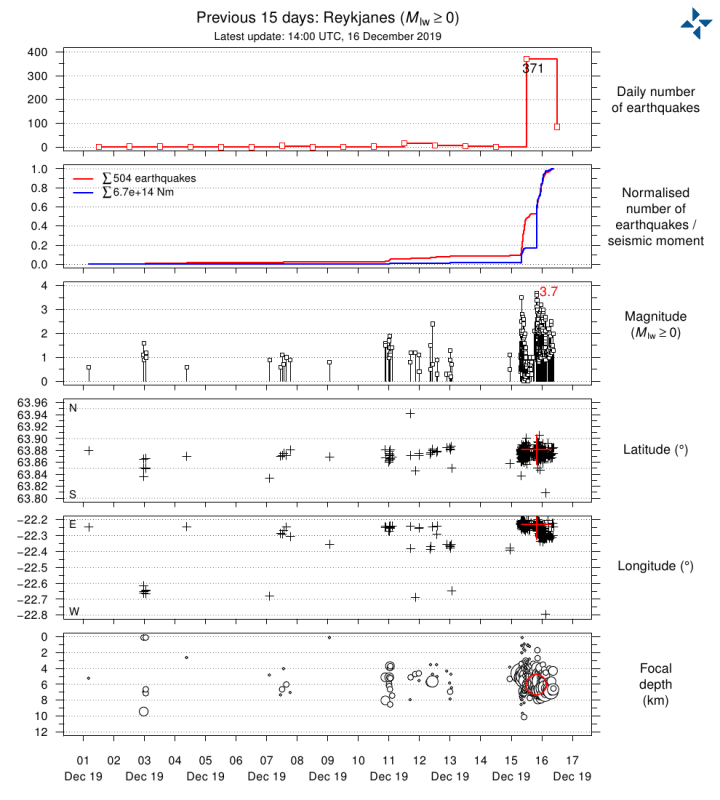 Earthquakes are generally common in this region. They are mostly of tectonic origin, but due to the unique geological setup of Iceland, there is a very short step between tectonic and magmatic swarms. Magmatic meaning that hot molten magma can rise through the crust, also causing earthquakes as it cracks upwards through the ground. Fagradalsfjall mountain has experienced several strong earthquake swarms in the past, mainly tectonic. A powerful swarm has occurred here on May 2009 (graphic below by IMO), with the strongest earthquake having a magnitude of M4.7! 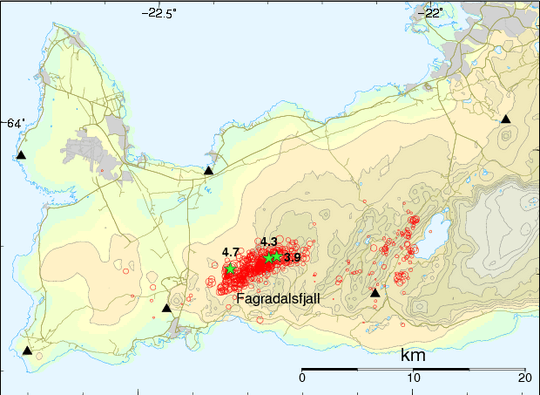 We will keep you updated on any important further development. While you wait for more updates, dont miss the extreme heatwave in Australia, which will raise maximum temperatures up to near 50°C (122°F):

An extreme heatwave is about to swipe across Australia, raising maximum temperatures up to near 50°C (122°F) in S/SE parts of the continent, breaking many all-time records!