With all the talk about the possible formation of a Medicane in the central Mediterranean over the next day or two, we take a look at current models. 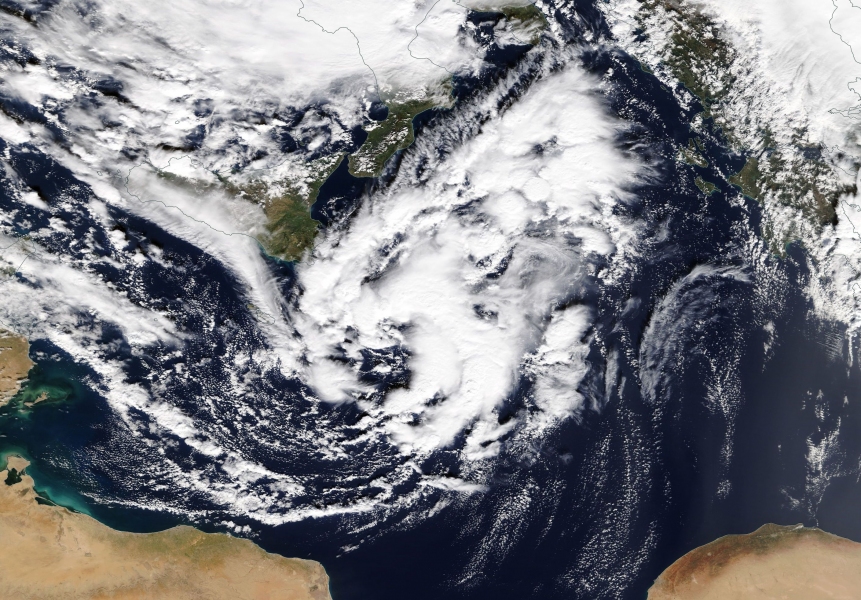 Latest (local noon, November 16) NASA Terra MODIS view of the tightening surface low over central Mediterranean, which may form a Medicane later today and tomorrow over the Ionian sea.

Medicanes or TLCs (Mediterranean Tropical-Like Cyclones) are relatively rare systems that share similarities with tropical cyclones, including a warm core and sometimes a clearly defined eye. They are infrequent phenomena, which sometimes reach severe status: usually with intense rainfall and some with severe winds (Medicane Qendresa in 2014, for example, reached peak sustained winds of 111 km/h and gusts of 154 km/h as it directly hit Malta). Two regions in the Mediterranean are favourable for Medicane formation: western Mediterranean and the Ionian sea. Both GFS and ECMWF models indicated the possibility of a Medicane in the central Mediterranean, in model runs early in the week. Most high-resolution models now also agree on the formation of a compact low over the central Mediterranean, with several indicating its winds will cross severe threshold (25 m/s, or 90 km/h). Below we review current model guidance of various high-res models. 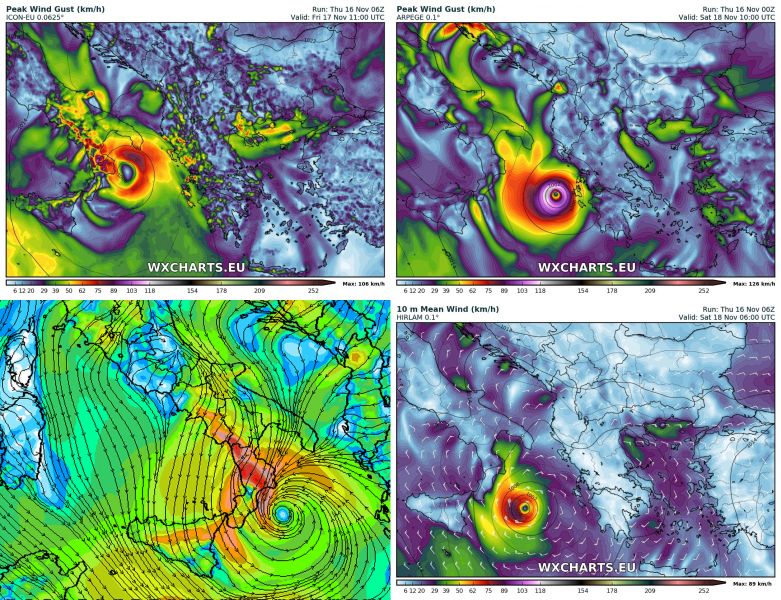 Current ICON model guidance has the low deepening as it tracks northward across the Ionian sea late today and the first half of Friday, turning westwards towards the Gulf of Taranto, reaching maximum intensity there (winds gusting at 100-110 km/h) and then slowly tracking along the coast of Calabria by Saturday morning while slowly dissipating. 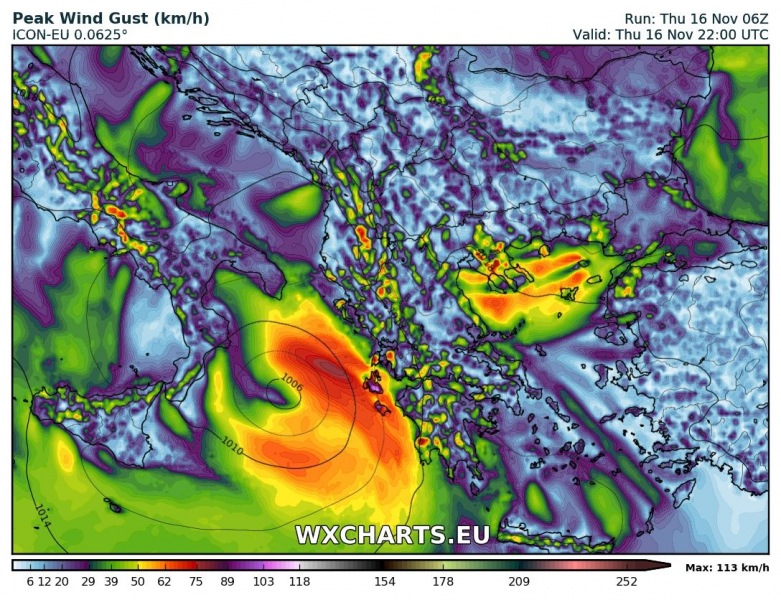 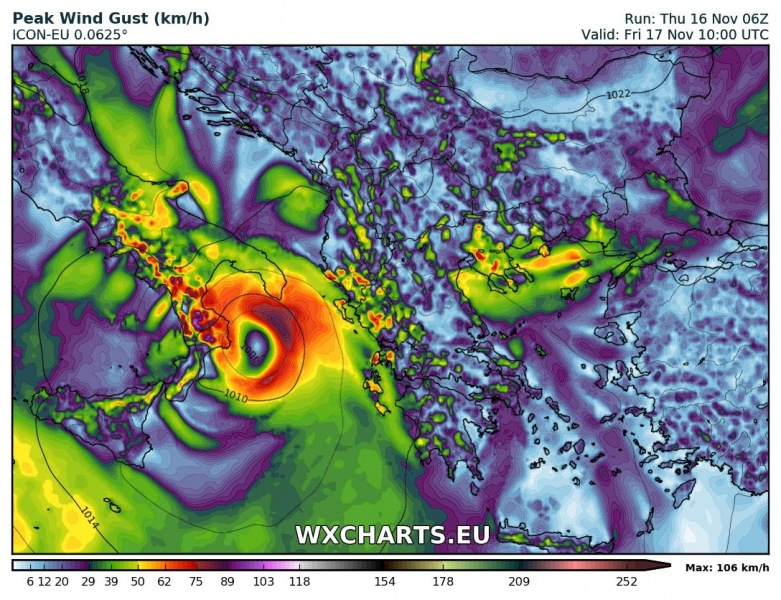 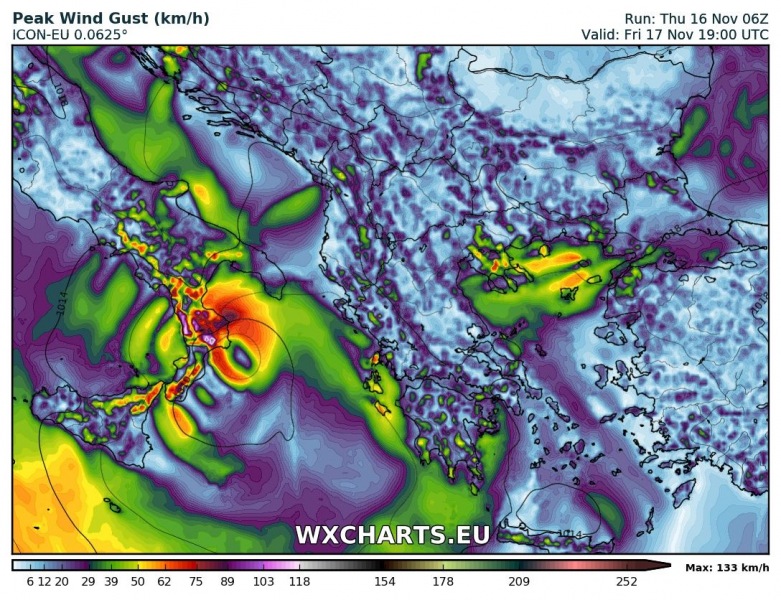 Latest ARPEGE model guidance has the system tracking northward through the central Mediterranean and Ionian sea today and tomorrow, making a loop across the northern Ionian sea late on Friday and early on Saturday, while intensifying (peak gusts up to 140 km/h), then tracking along the west coast of Greece possibly further intensifying. The forecast track has been changing significantly from each model run to the next and will likely require further updates. 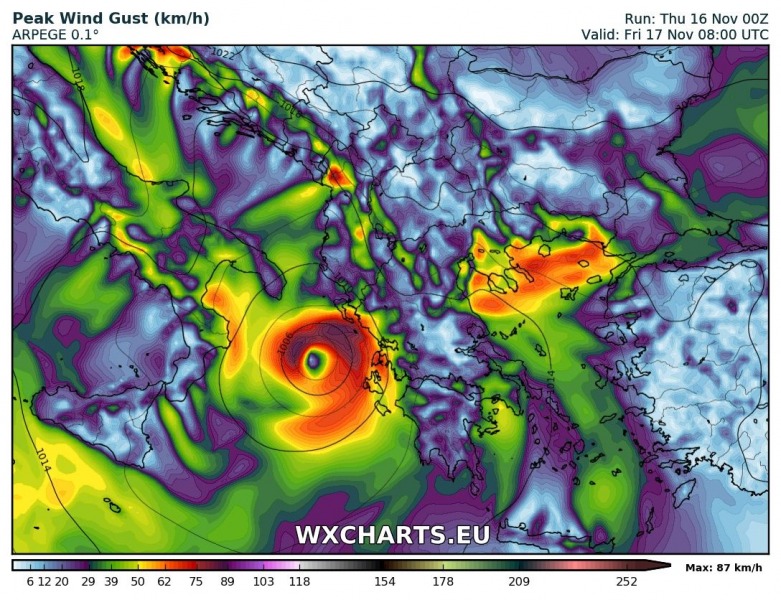 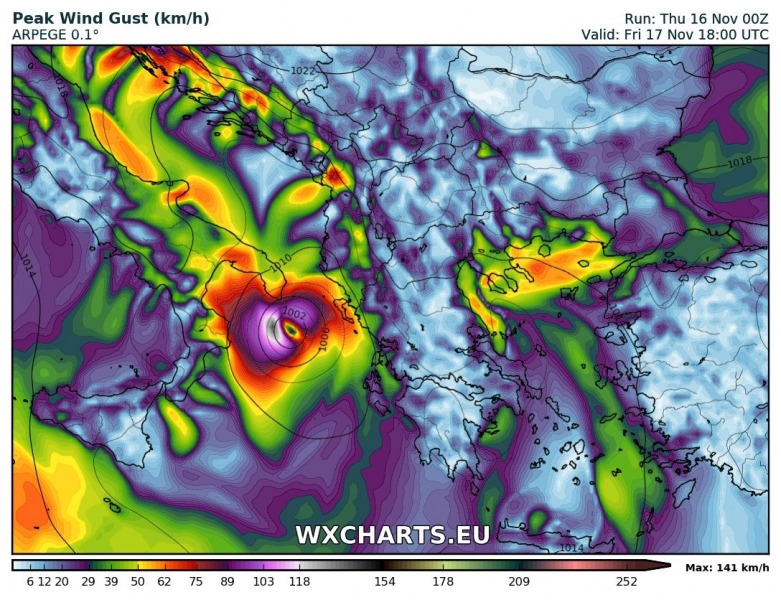 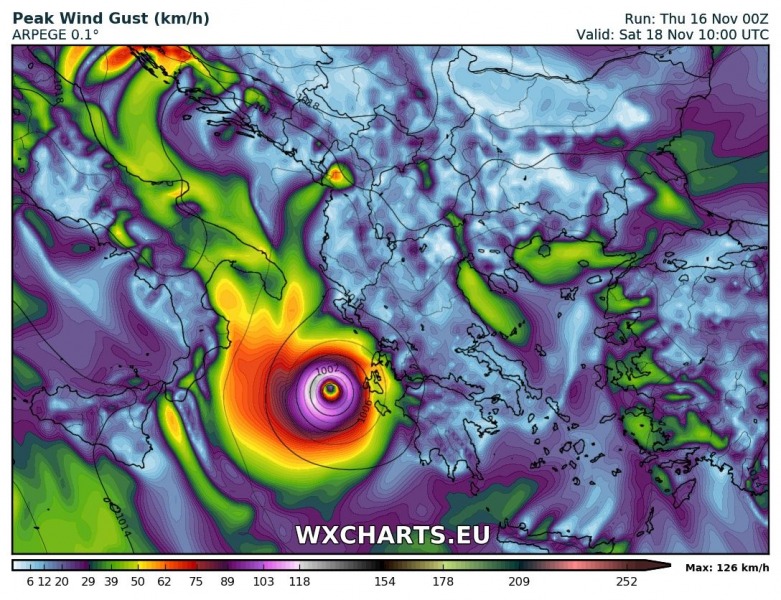 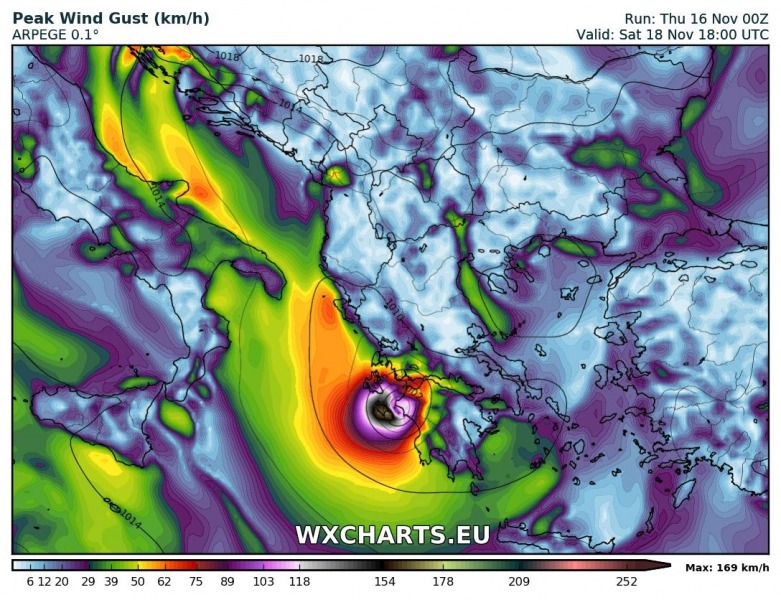 Latest HIRLAM model run also indicates the formation of a strong system, albeit later than other models. The low intensifies on Friday over W-CNTRL Ionian sea with sustained winds of 70-80 km, and then tracks southward early on Saturday, while intensifying to 90 km/h sustained winds. 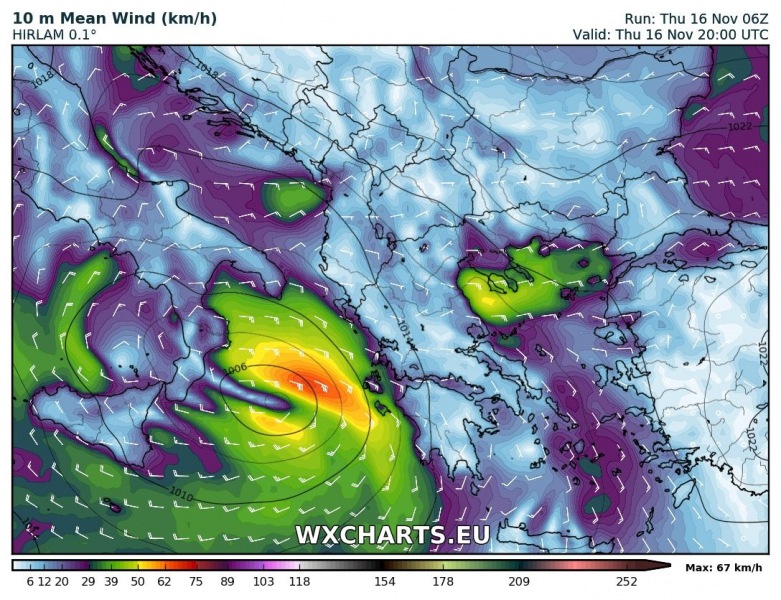 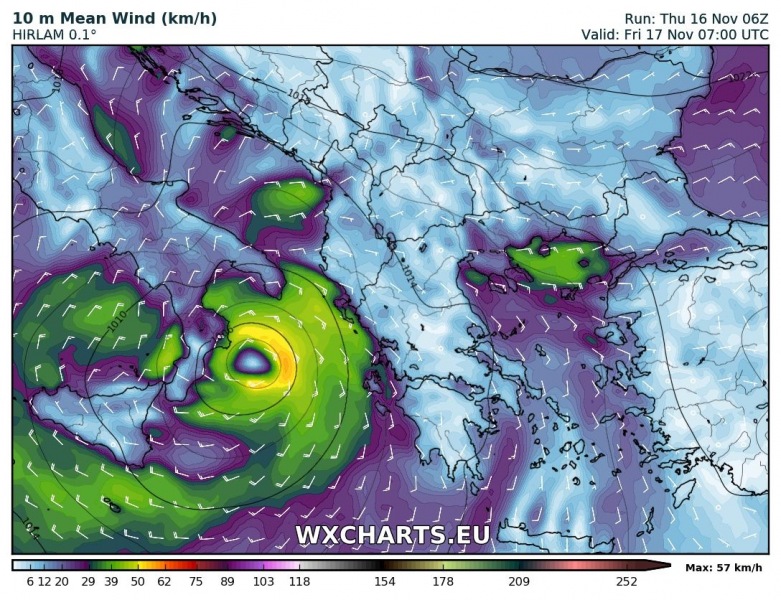 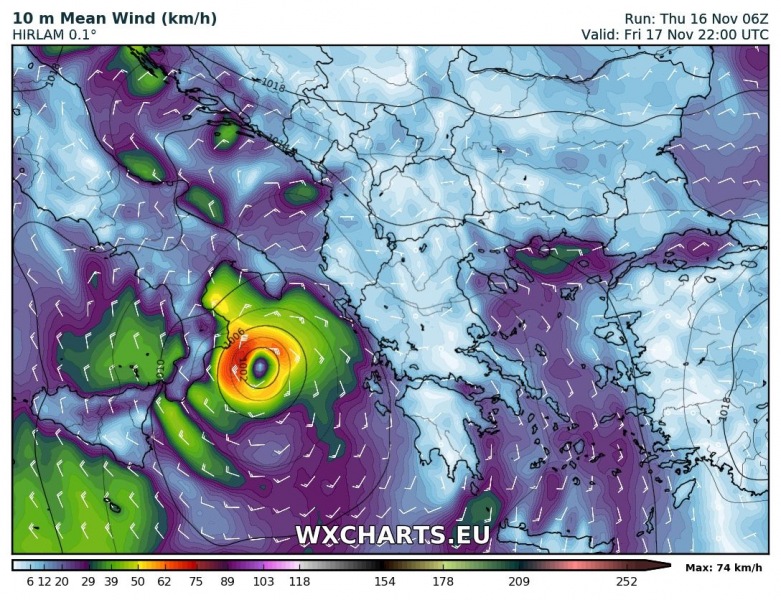 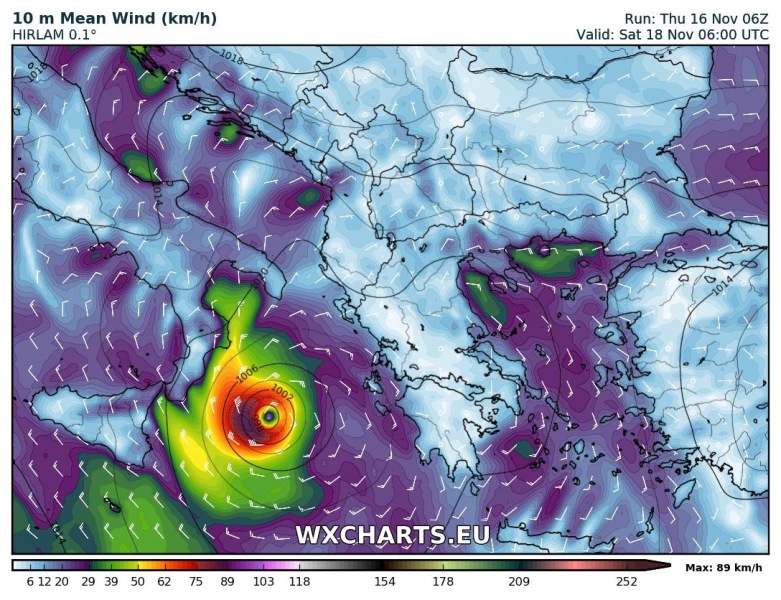 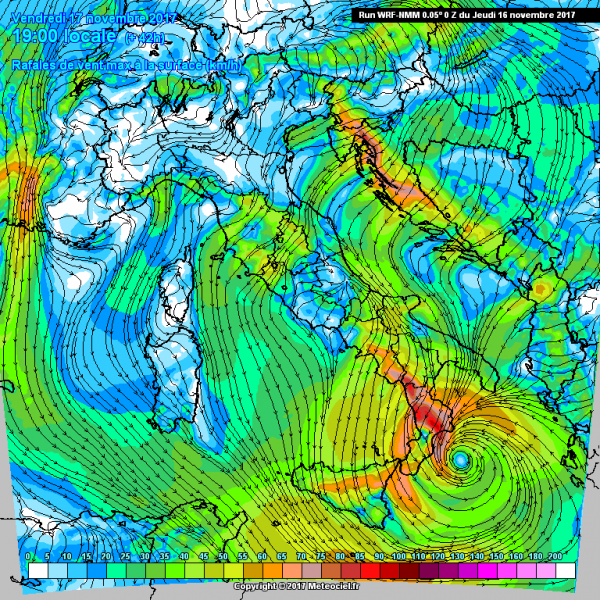 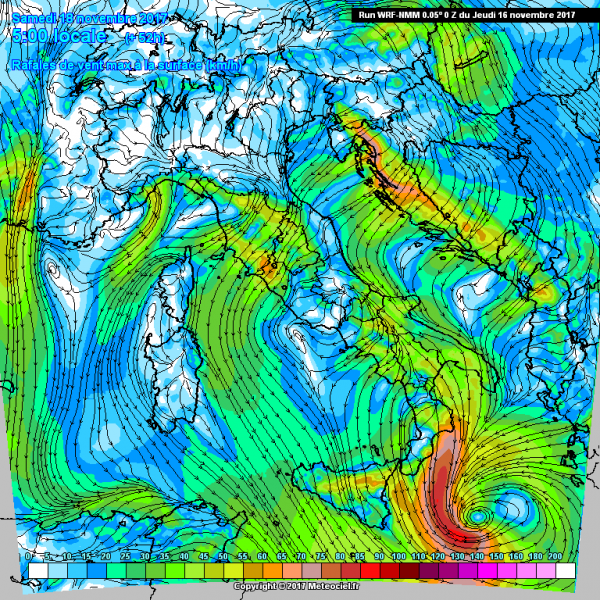 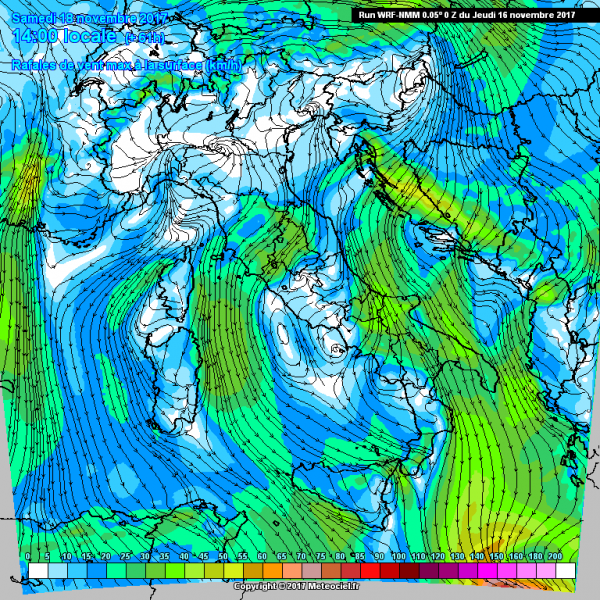 Stay tuned for further updates as the system evolves!