The Amazon rainforest is being set on fire, with wildfire smoke circulating the hemisphere

The lungs of the Earth are on fire yet again, after the devastation it was caused there last year. A new fire season begins, with many man-made fires that are spreading, clearing land for agricultural use. The Amazon wildfire spread is intense, sending smoke across the Southern Hemisphere.

Wildfires in South America occur every year, as the region enters its dry season. The main problem is that many of the wildfires in the Amazon rainforest are started artificially by locals, with the intention to burn down the forests to create open land for agriculture. The image below shows the wildfire hotspots from MODIS and VIIRS satellite observations for the past 7 days. A lot of fire hotspots can be seen in the central countries as well. 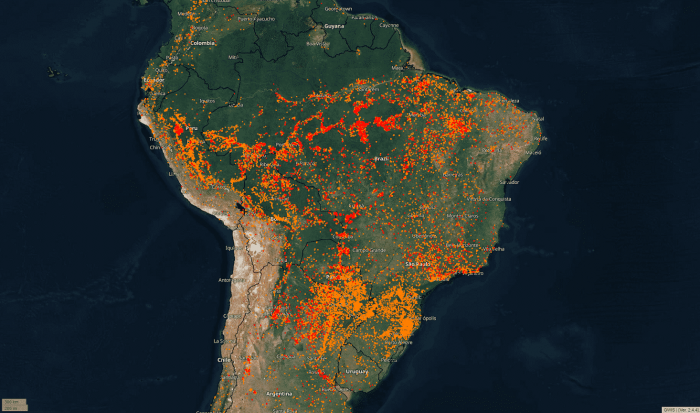 The peak of the fire season in South America coincides with the dry season, from July to October. The image below from the Global Fire Database, shows the number of detected fires for Brazil compared to the past years. This year, the number of wildfires in the early season is the largest in the past 10 years in Brazil. 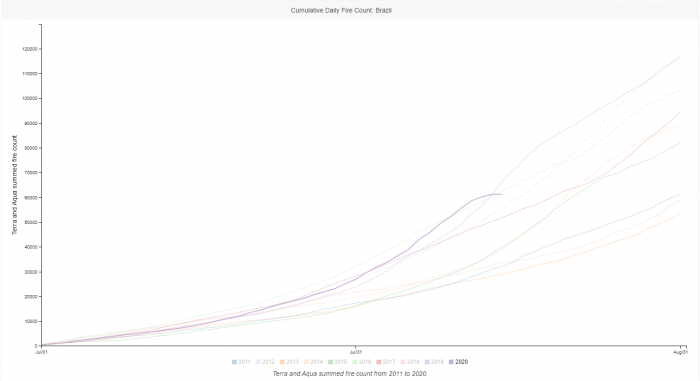 The Amazon wildfire numbers are also reaching a high count already. More than 40.000 individual fires have been recorded by the end of July. That is the second-highest number for the Amazon regions in the past 10 years. 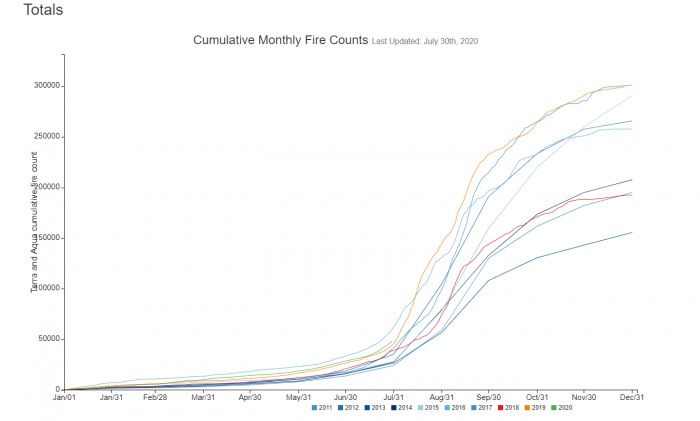 The region that is experiencing much larger numbers than last year is Mato Grosso in Brazil. Nearly 20.000 individual hotspots have been detected in this state alone by the end of July. Many forest fires in the country are started deliberately by illegal loggers and farmers wanting to quickly clear ground. The new land is being used for animal pasture when green, or for planting crops. The legislation in Brazil does not allow intentional forest burning, and as such is deemed illegal. But during the intense Coronavirus crisis in Brazil, the authorities are already struggling with the ongoing pandemic. 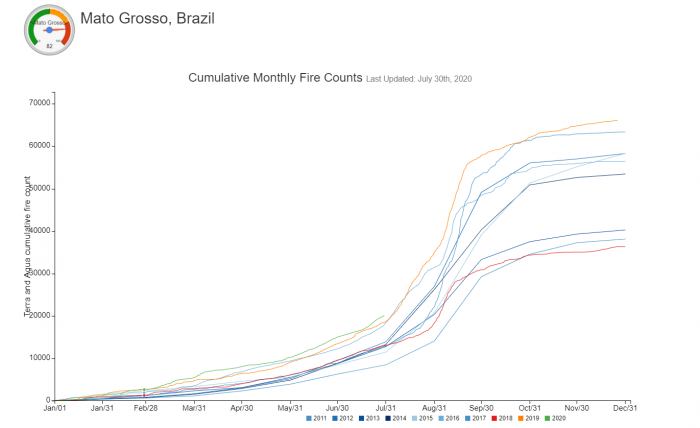 The ECMWF Fire danger index forecast for next week, shows very high values for Brazil. The weather will be drier and supportive of a large spread of wildfires from the Amazon towards the southern and central regions. 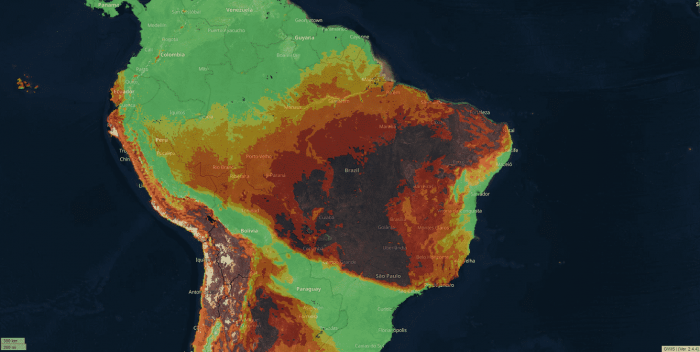 LUNGS OF THE EARTH

Wildfires release a lot of smoke, which contains dangerous gases. It can usually be seen from space, and also tracked by satellites. We can track the dispersion of smoke across the world, by looking at the Carbon Monoxide (CO). This is a gas that is being released in the burning of wood and other biomass. The analysis from NASA GEOS-5 modeling system shows the Carbon Monoxide concentrations around South America. A strong plume is being sent towards the Atlantic and the eastern Pacific. 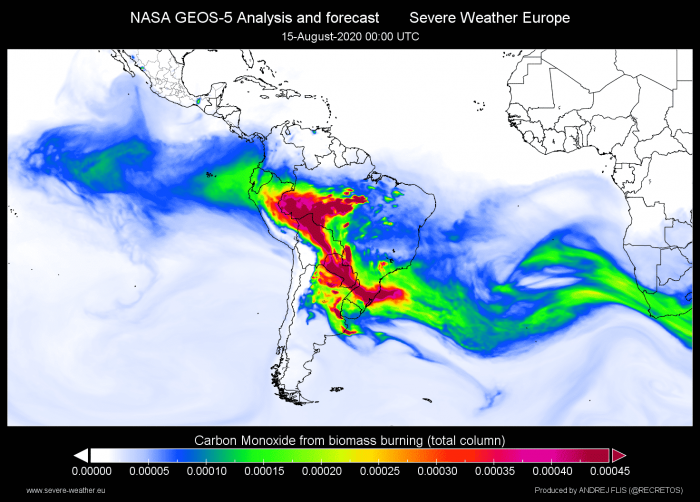 The forecast shows the plume of Carbon Monoxide spreading as far east as Australia. The smoke itself might not be seen anymore at this distance. But the particles can still reach very long distances, only visible with instrumentation. 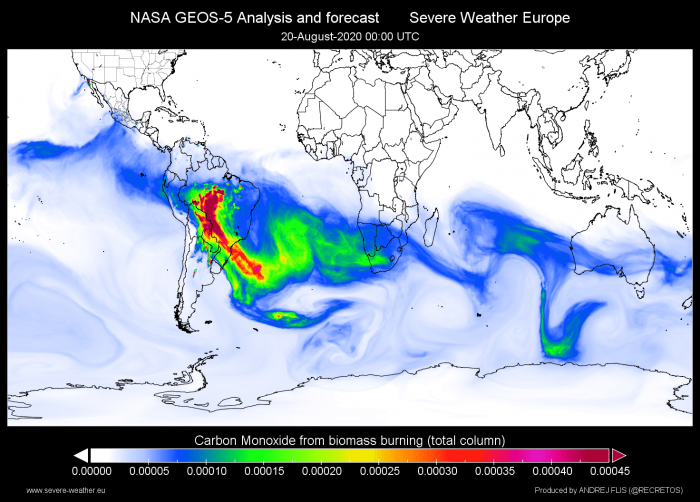 We produced a high-resolution video, which shows the transport of smoke and Carbon Monoxide from the South American fires. Also, note the smoke release in the state of California in the United States, where a fire crisis is also ongoing.

The Amazon rainforest is often called “the lungs of the Earth”. It produces a lot of oxygen and absorbs Carbon Dioxide. Despite the fact most of the world’s oxygen comes from the oceans, the Amazon rainforest is still an important factor in the global circulation. The graphic below shows the amount of atmospheric CO2 (the most well-known greenhouse gas) for August 15th, 2020. We see a reduced concentration of CO2 in the Amazon regions. That is because of fewer settlements and less CO2 release, and also because of the forests absorbing CO2 via photosynthesis. 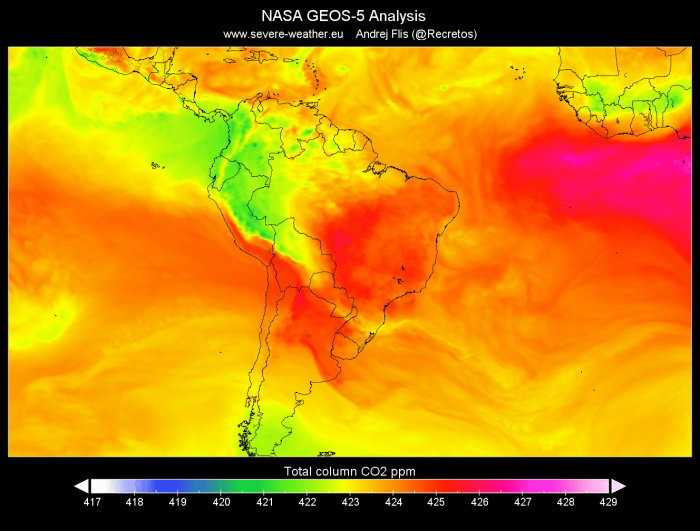 As mentioned before, the state of California, USA is also experiencing intense wildfires. NASA GEOS-5 data also shows Carbon Monoxide release in northern and southern California, where most of the hotspots are. 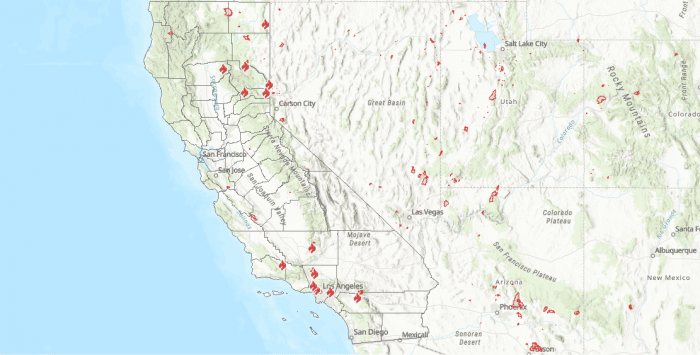 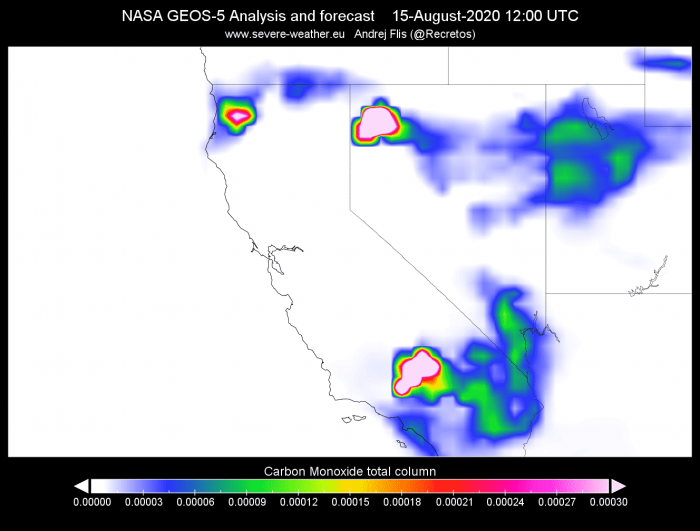