Severe storms with a threat for large hail, severe winds, and torrential rainfall with flash floods are again expected across parts of Germany, Czechia and southern Balkans. Additional storms are likely over western France, Algeria, and northern Scandinavia on Saturday.

An upper ridge is placed across western Europe and North Atlantic. To its north, a powerful deep upper low moves across northern Scandinavia. Another upper low is moving across the Bay of Biscay towards France and Iberia. A short-wave over the Balkans strengthens a bit. Another upper low forms along southern Greenland. 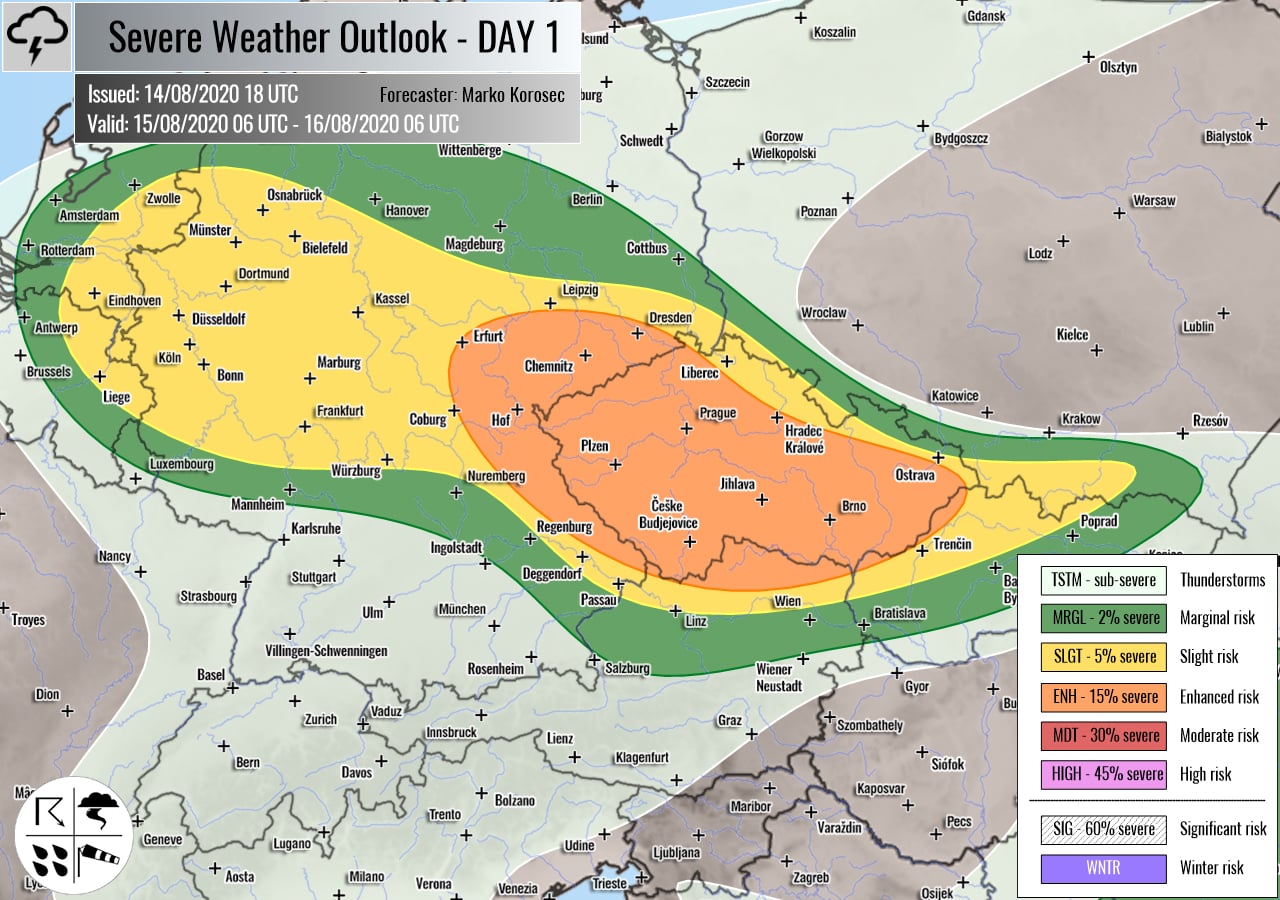 ENH/SLGT risks have been issued for east-central Germany, Czechia, northern Austria into northwestern Slovakia with a threat for severe storms, capable of producing torrential rainfall with flash floods.

Moderately instability is expected along the diffuse frontal zone, very low shear and high moisture are present. This will contribute to a widespread initiation of multicell storms with very intense rainfall. Storms will be slow-moving or nearly stationary. Therefore, flash floods are locally expected along with high rainfall sums. Storms may continue in the evening. 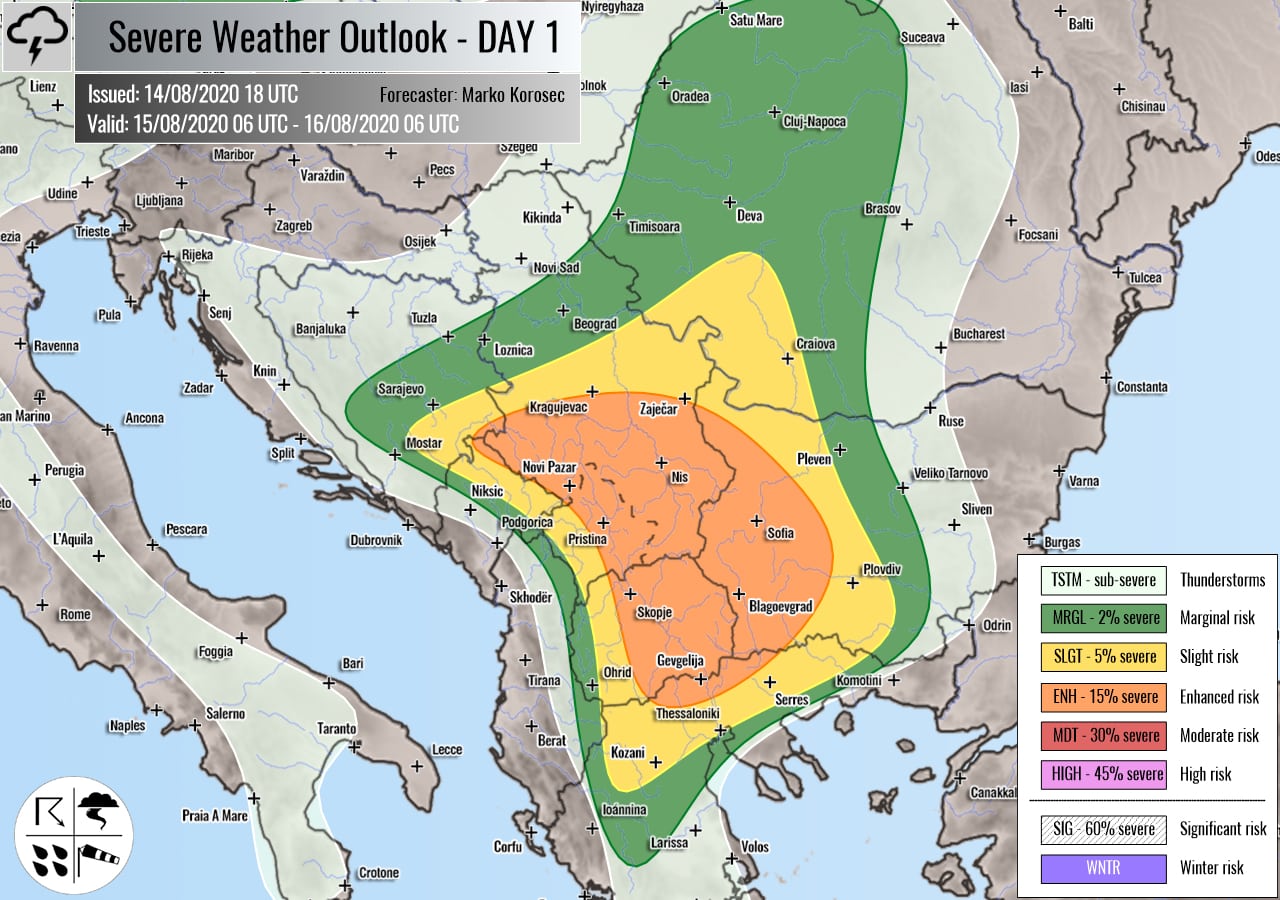 An upper wave continues east across the Balkans and deepens during the day. This serves as the main focus for rather widespread convective activity within a strongly unstable air mass but weak to moderate shear. Local topography and pre-existing outflow boundaries from the overnight activity will be the primary trigger for storms.

Again, numerous multicell storms and small clusters are expected, producing locally lots of rain and flash floods threat due to their slow-moving nature. A few supercell storms with very large hail are possible, especially across the southern parts of the risk areas where better shear is present. Storms will continue into the evening and night hours.

SLGT risk has been issued for northeast Spain into southwestern France and the Bay of Biscay with a threat for severe storms, including supercells with large hail, torrential rainfall, and severe winds.

A new upper low move in from the Bay of Biscay and results in moderate instability with increasing shear. This should become conductive for organized storms, including a few supercells. The most robust storms could produce large hail and severe winds. Activity will gradually spread north-northwest across western France in the evening hours.

SLGT risk has been issued for northern Sweden into northern Norway and northern Finland (Lapland) with a threat for isolated severe storms, including supercells with marginal hail, severe winds, and some tornado threat.

A very powerful upper low with intense wind field and shear crosses northern Scandinavia. Although the instability is strongly limited due to lack of moisture and significant heating, a few low-topped supercells could form and produce severe winds. Wind shear and helicity will also be quite strong, given the south-southeast winds ahead of a rapidly moving cold front from the west. These could promote tornadic potential.

SLGT risk has been issued for northern Algeria into northern Tunisia with an isolated threat for severe storms capable of producing large hail, and severe winds. Moderately instability and shear should support a few supercells with large hail as a primary threat.

TSTM risk areas have been placed across Ireland, southern England, Bay of Biscay, Italy, the Alps and northern Poland with a threat for daytime driven storms. Limited shear is present, so the storms should remain sub-severe.

Share on TwitterShare on RedditShare on FacebookShare on PinterestShare on WhatsApp
Severe Weather Outlook - Aug 14th, 2020
← Previous
The Amazon rainforest is being set on fire, with wildfire smoke circulating the hemisphere
Next →
Comments are closed.