Currently, a large Saharan dust cloud is moving across the Atlantic Ocean. It has already reached the Caribbean, where it will remain for a few days, before also heading for the southeastern United States early next week.

Strong thunderstorms and convective systems over Africa, sometimes create massive dust storms. If the pressure patterns and winds are favorable, these massive dust storms can reach the Atlantic Ocean and also far west towards the Caribbean and the United States.

Such large dust clouds are more commonly known as SAL (Saharan Air Layer). The Saharan Air Layer is a mass of very dry, dusty air that forms over the Sahara Desert during late spring, summer, and early autumn. It moves over the tropical North Atlantic every three to five days, with some events reaching very high volumes of dust.

Current analysis reveals a strong Saharan dust event ongoing across the Atlantic Ocean. The GOES-16 satellite imagery below shows a large dust cloud currently moving across the tropical Atlantic. It has already reached the Caribbean.

The satellite moisture analysis shows the massive dust cloud from another perspective. The bright pink colors highlight the large dust cloud extending from the Sahara Desert, west into the Atlantic, as a very dry area. 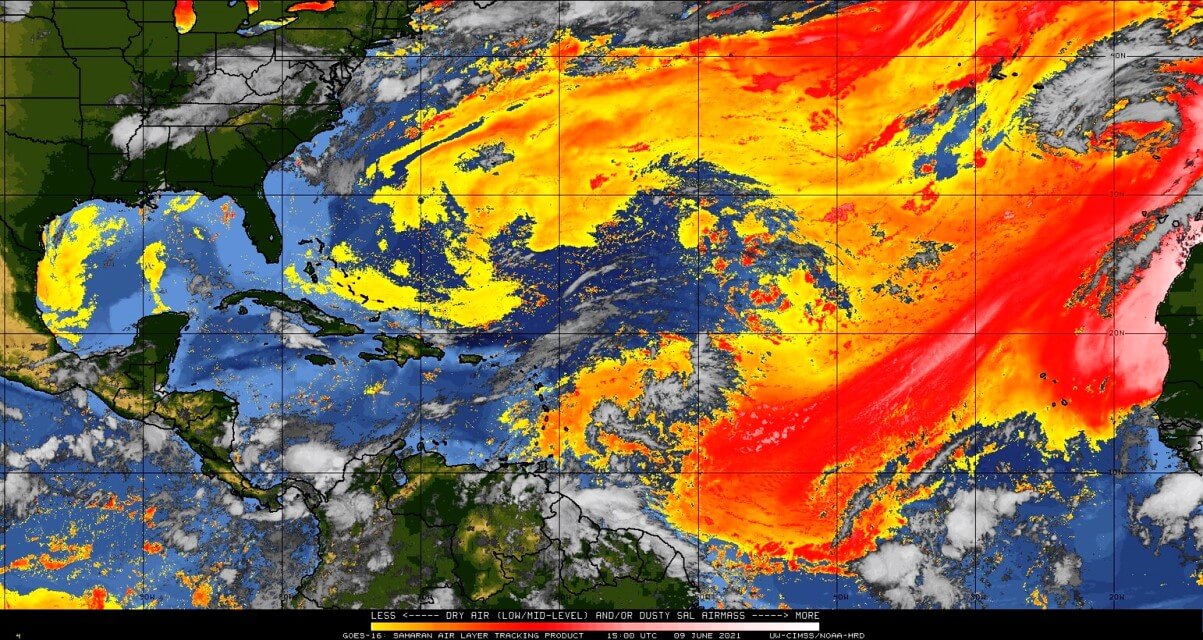 We produced a forecast animation, which shows the movement of this massive dust cloud across the Atlantic in the coming days. The dust cloud will remain over the Caribbean till the end of the week, likely extending towards the southeastern United States early next week.

The Saharan Air Layer is warm, stable, and very dry, as it has about 50% less moisture than the typical tropical atmosphere. This warm and extremely dry air can weaken a tropical cyclone or a tropical disturbance and prevents the formation of thunderstorms.

The satellite air moisture analysis below shows the large Saharan air layer as it is approaching the eastern Caribbean. There are storms right on its western edge, where the conditions still allow thunderstorm formation, but not inside the dust cloud, where the driest and most stable air can be found.

Research shows, that iron-rich particles inside these dust storms reflect sunlight, thus cooling the atmosphere. These fine particles also reduce the amount of sunlight reaching the ocean, which reduces the heating of the ocean surface, while the dust cloud is passing over.

The dust plume has already reached the island of Aruba today (June 10th), in the southern Caribbean. The image below by Jared Heil shows the dusty haze in the lower levels above the island. It is limiting visibility and affects the air quality. 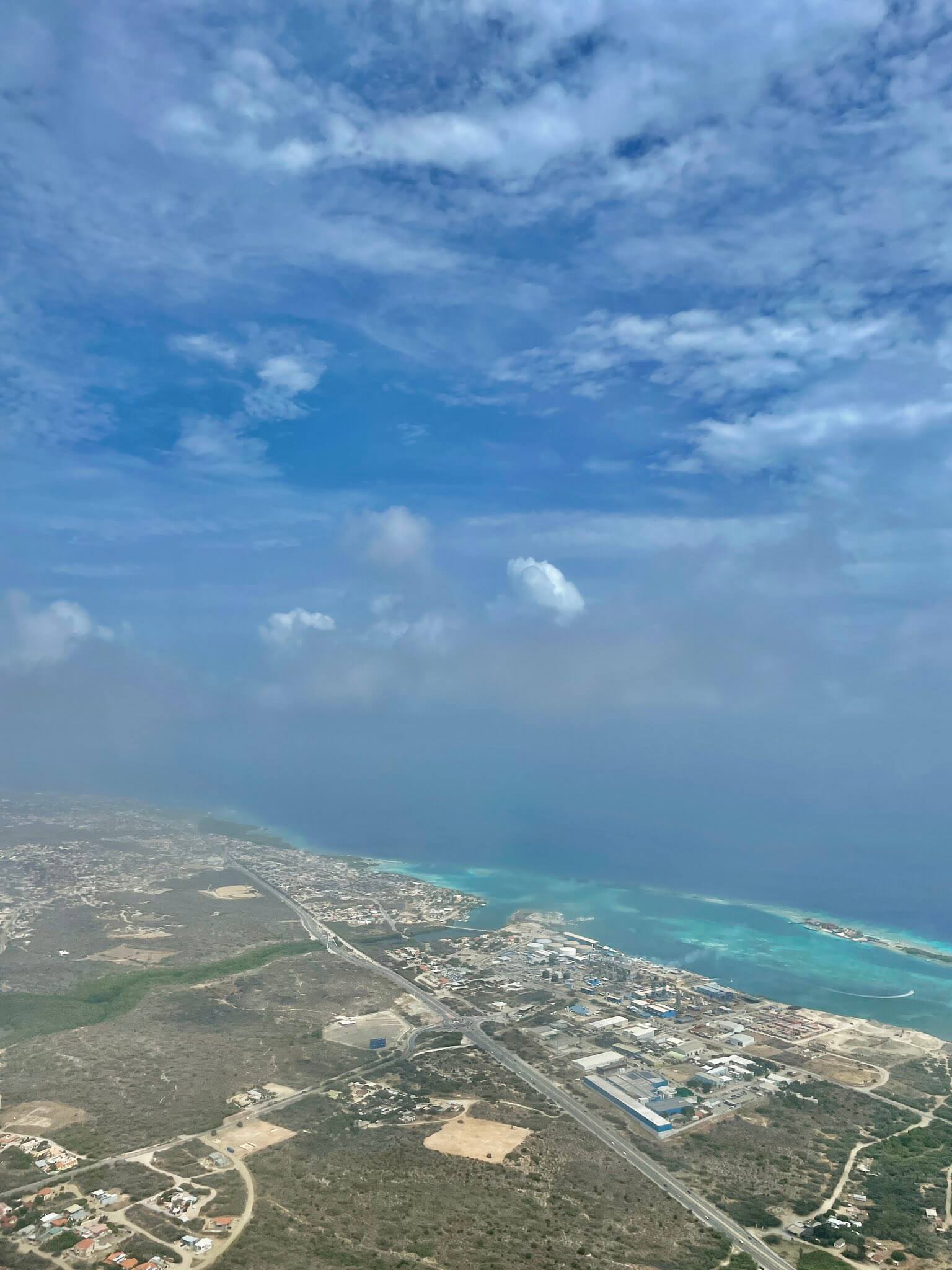 The persistent high-pressure system in the central Atlantic is the main steering mechanism. The easterly trade winds carry the dust clouds from Africa towards the west. 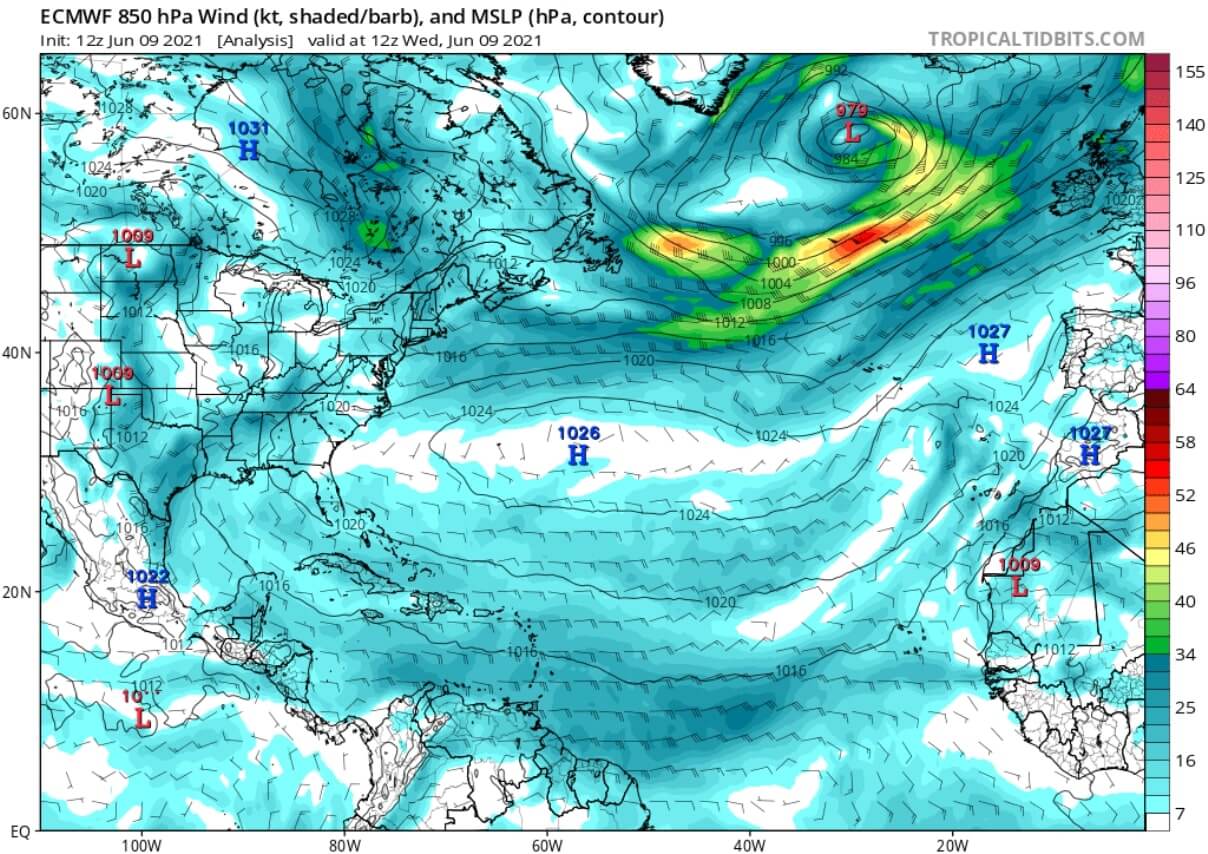 Below we can see the dust mass analysis from the NASA GEOS-5 modeling system. high concentrations of dust can be found in the main core of the dust cloud over the central Atlantic. The western leading edge of the cloud has already reached the eastern and central Caribbean. 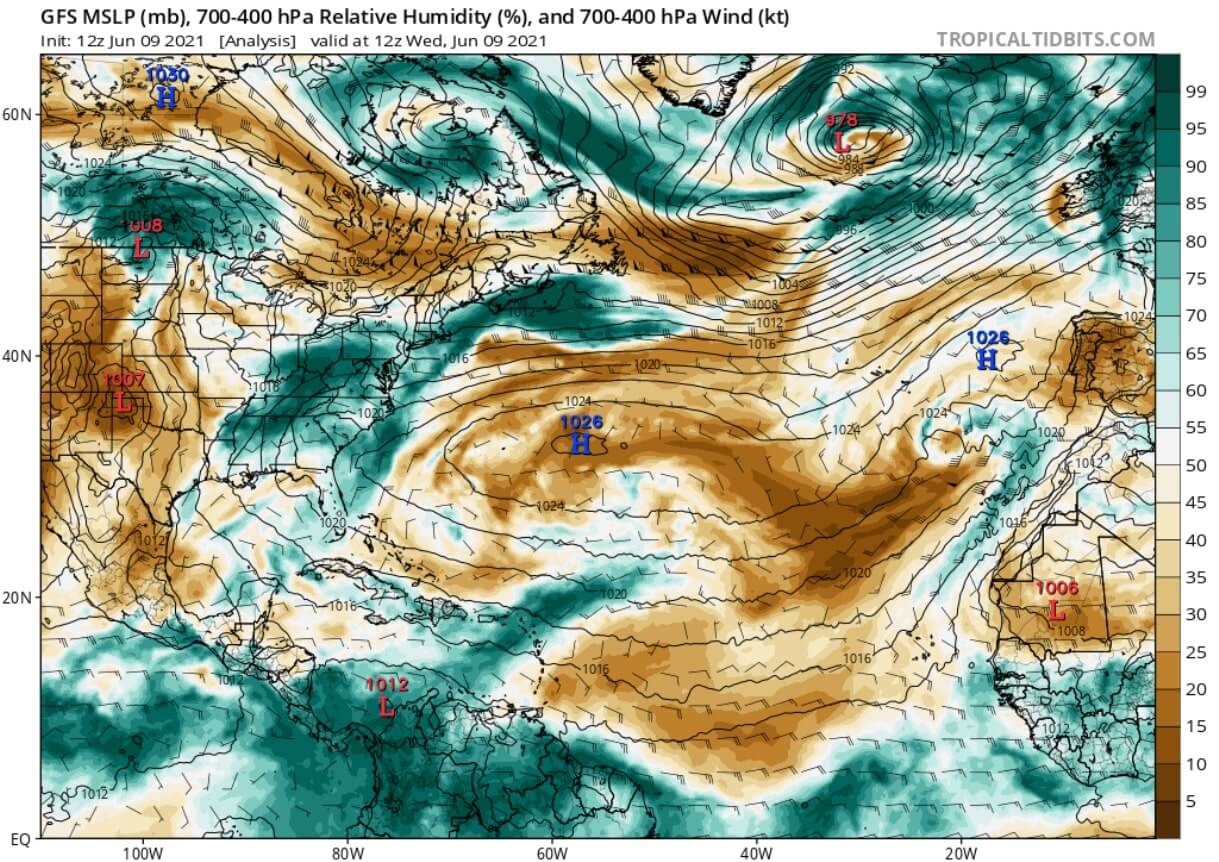 By the end of the week, the high-pressure system in the central Atlantic will pull back towards the east. That will help to amplify the easterly trade winds from western Africa, transporting a new dust cloud out into the Atlantic Ocean. 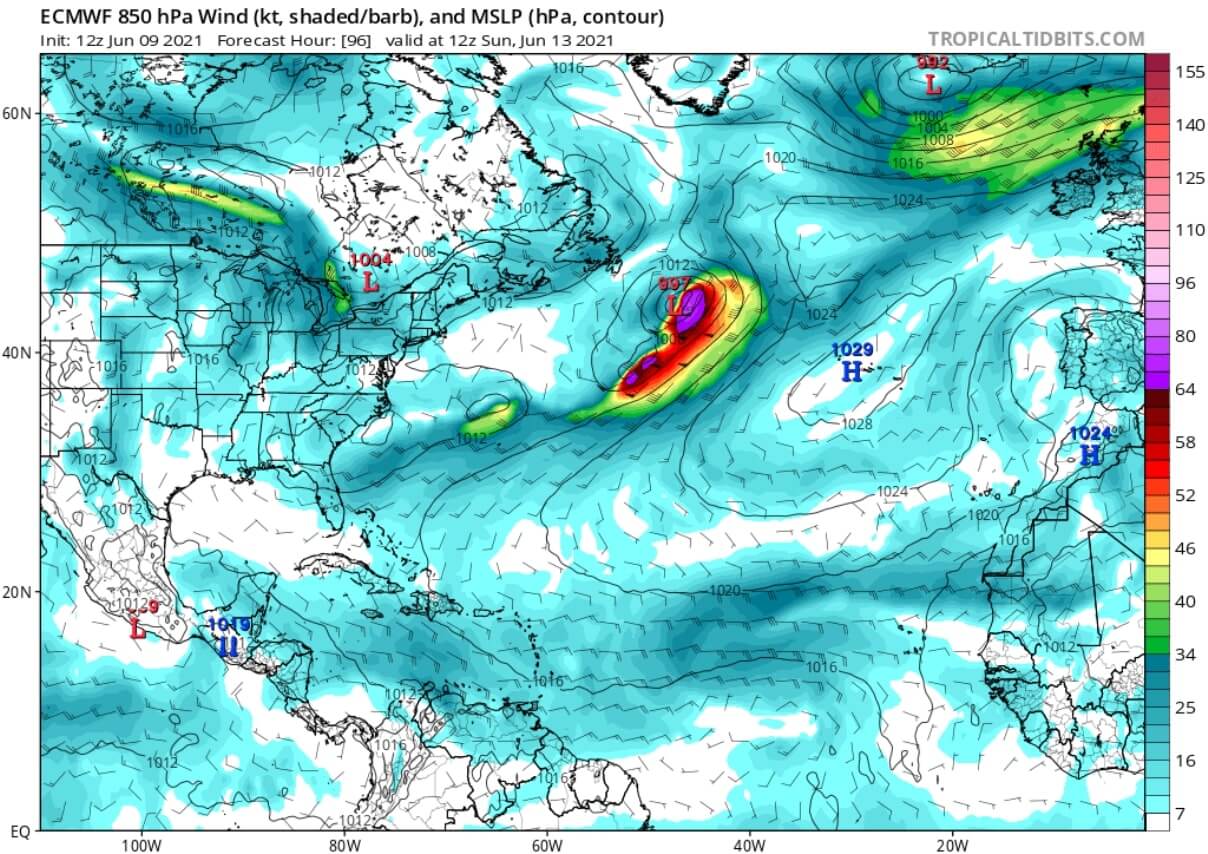 The dust forecast from the NASA GEOS-5 system shows the first dust cloud over the entire Caribbean. The dust concentrations are quite high for a dust cloud so far towards the west. A new dust cloud can be seen leaving western Africa.

Early next week, the high-pressure system in the central Atlantic will move slightly back towards the southwest. It will help to amplify the easterly winds from the central tropical Atlantic further west into the Caribbean.

The NASA GEOS-5 dust forecast shows the initial dust cloud reaching southern Florida early next week. The dust concentrations are forecast to be moderate over Florida and moderate to heavy over Cuba and the Bahamas. The second dust cloud is already forecast to reach the eastern Caribbean at this time.

Later next week, the high pressure in the central Atlantic will weaken, with a cold front moving from the United States into the Atlantic. A high-pressure area will expand over the southern United States behind the cold front. 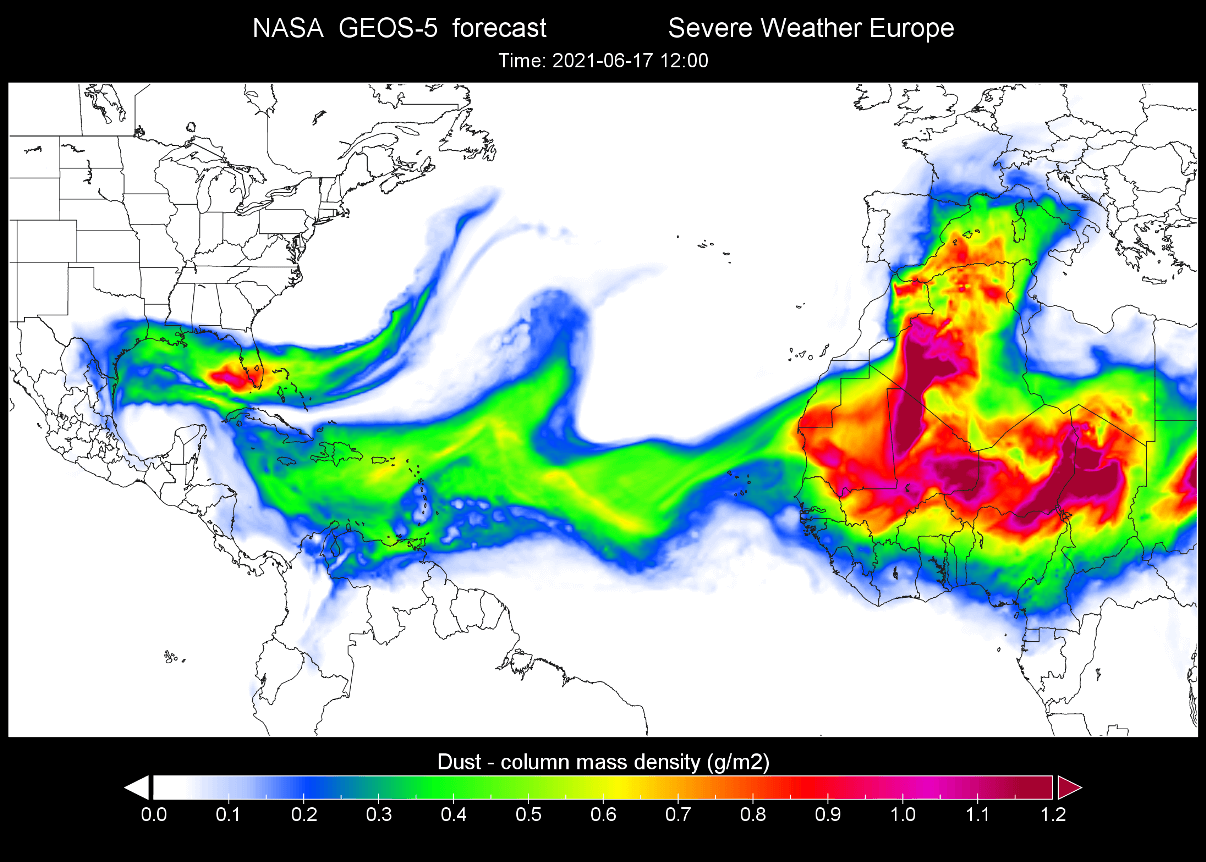 A similar event occurred last year, in late June. Below we have 3 images of this strong Saharan Air Layer event last season. The first image shows the view of the Saharan dust cloud over the Atlantic, as seen from the International Space Station in late June 2020. 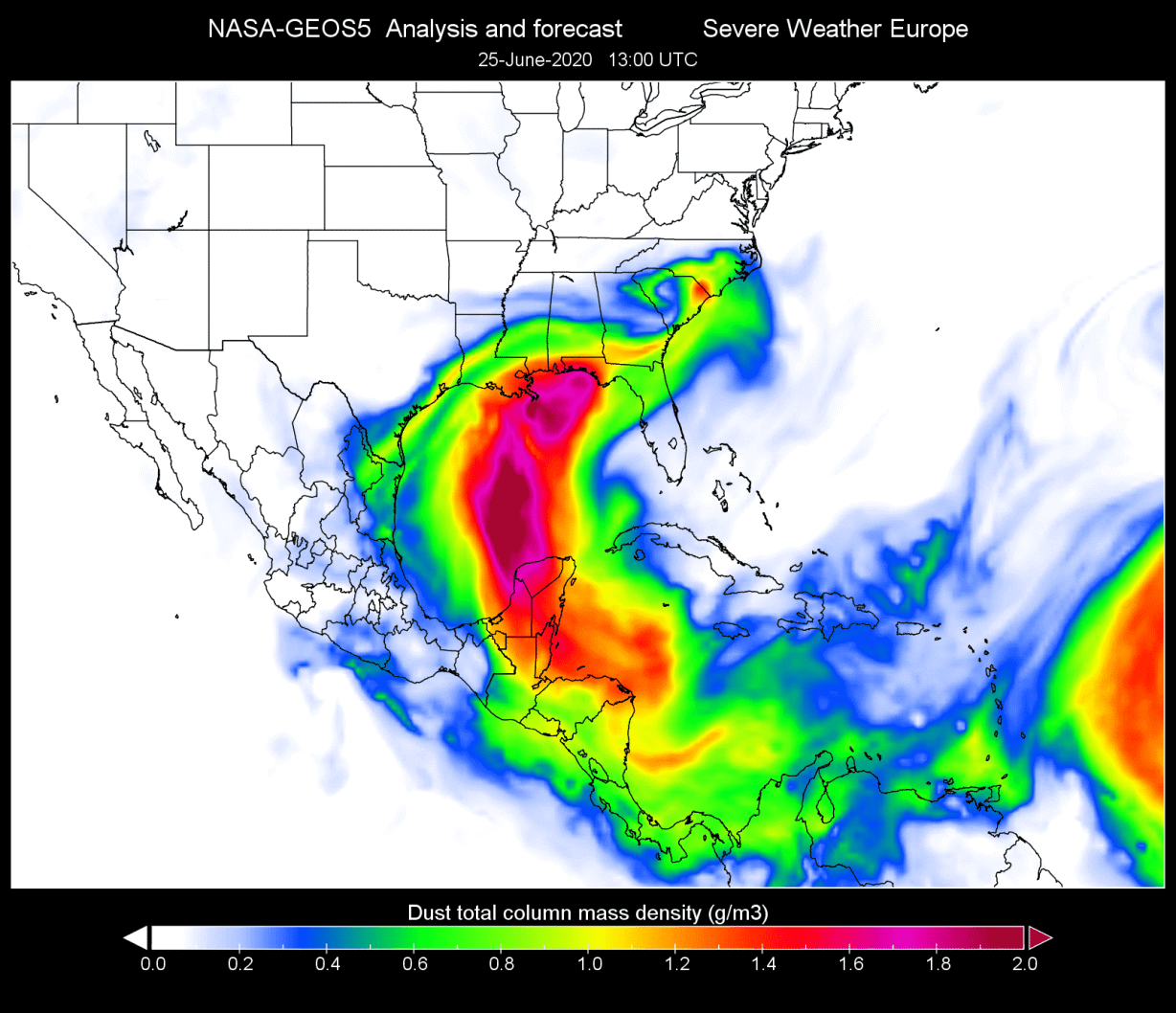 Such a large dust cloud can cause a change in weather, as it brings drier and more stable air, meaning less precipitation. Fine dust particles can also act as a natural fertilizer, so it is beneficial for the soil.

Arctic sea ice melt season is now underway, but not as strong as in recent years