Significantly worsening conditions are underway across western Europe as two named storms, Christoph and Gaetan, are heading for the UK, the North Sea, and southern Scandinavia tonight into Thursday. Violent damaging winds are likely to develop across the North Sea with close to a meter (100 cm) of fresh snow with the winter storm forecast to hit southern Norway until Friday.

As an effect of the Polar Vortex collapse through early January, the weather patterns across the Northern Hemisphere are changing dramatically over the past two weeks. A strong blocking ridge has developed over the polar/arctic region, including a strong high-pressure system over the far North Atlantic and Greenland. 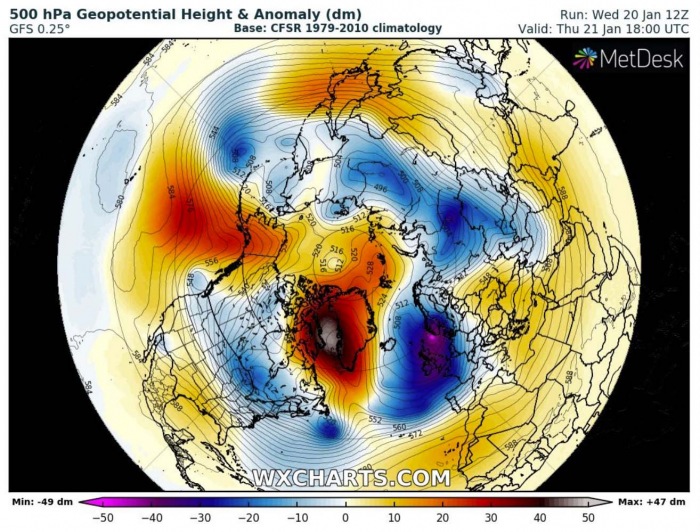 To the east and south of it, a deepening trough is underway over western Europe, significantly worsening the weather conditions this week. Explosive cyclogenesis, called a bomb cyclone, is expected to develop across the UK and the North Sea over the next 24 hours as progressive weather pattern starts.

This pattern shift has followed the vortex collapse. As generally speaking, the Polar Vortex is a connection between the bottom of the atmosphere (our weather) with the stratosphere aloft. As it often happens during the winter months, a significant exchange of energy between both layers leads to much more dynamic weather pattern development across the Northern Hemisphere.

The air masses and the weather we experience are found in the lowest part of the atmosphere, it is called the troposphere. Typically, the troposphere reaches up to around 16 km (10 miles) over the tropical (on both sides of the equator) and gradually falling down up to around 8 km (5 miles) altitude towards the polar regions.

Above this layer, there is a much deeper layer called the stratosphere. This layer is around 30 km thick and is very dry (low absolute humidity). Schematic image presentation of the atmospheric layers can be seen below, with the stratosphere in green hues, and the troposphere in blue at the bottom of the image. 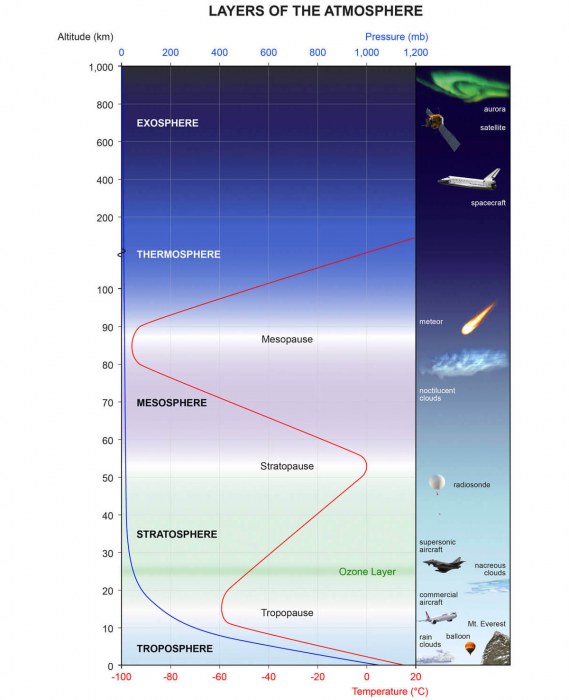 As we move into autumn months and the Earth’s tilt brings shorter days, the northerly regions begin cooling. While the atmosphere further south remains relatively warm as it keeps receiving enough energy from the Sun. As the north pole receives basically no sunlight as we head into December, the lack of thermal energy brings much more significant cooling.

So basically, it is almost like a very large cyclonic system, covering the whole north polar region, extended towards the mid-latitudes. The polar vortex is present at all of the levels, almost from the ground and further up. The closer to the ground we get, the more deformations it receives due to the complex terrain. And as the pattern is more dynamic with numerous frontal systems.

There is now an elongated surface low – storm Christoph ongoing across the southern portions of the UK this Wednesday, gradually losing its strength over the North Sea. Christoph was named by the UK Meteorological Office (UKMET) on Monday.

But the main focus is the second storm followed behind it, which is organizing over the Bay of Biscay. It is also expected to head for the UK tonight and literally explode into a very deep low over the North Sea, spreading a major winter storm to Norway by Thursday.

The system got a designated name Geatan, issued by the Portuguese Weather Service IPMA.

The general pattern over Europe is actually divided into two parts, the more ridging to the east-southeast parts with a deep trough/low moving into western Europe. A broad cold maritime air mass is being advected south in the wake of the large depression. As of this Wednesday afternoon, we could see some hints of Gaetan’s core over the Bay of Biscay, gradually moving northeast towards the UK. 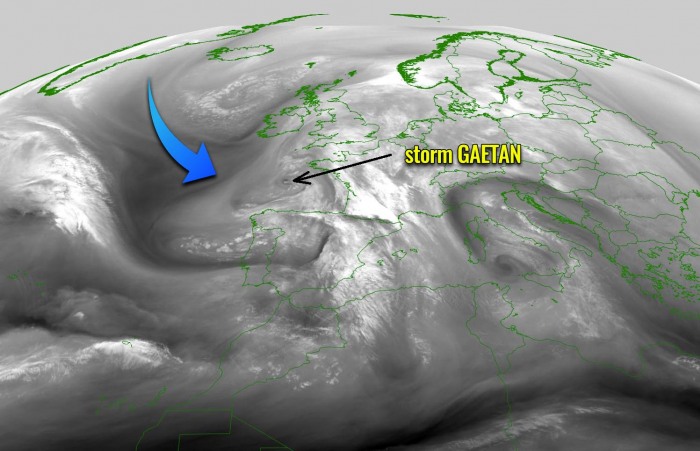 The low now emerging over western Europe is part of the complex pattern, developing with strengthening upper trough from the north to south. The lowest pressure has been observed within the narrow area from the North Sea across England into the Bay of Biscay, within this elongated low. 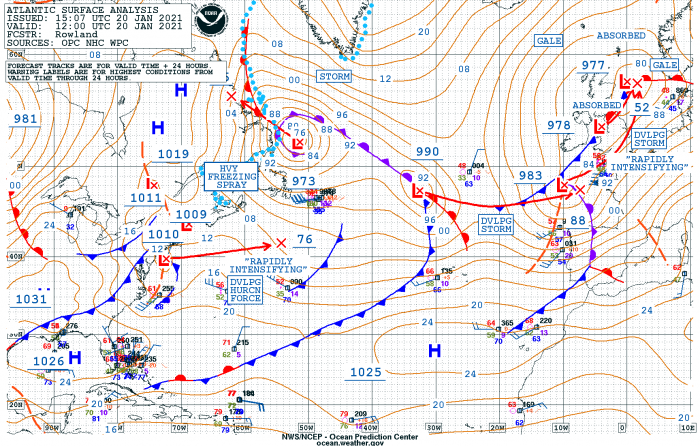 The NOAA forecasters agree with the model predictions, expecting this new low to explosively strengthen into Thursday and push towards 950 mbar. Further west over the North Atlantic, additional storms are present. With another rapidly intensifying storm ejecting New England (US), moving east.

As the Geatan intensification and pressure fall will be quite rapid, it is likely to become a bomb cyclone*. The forecasted pressure change over the 24-hour period is 25-30 mbar, so beyond the threshold bomb cyclones must have to meet the criteria.

*A bomb cyclone is defined as a system that is intensifying very rapidly. Bomb cyclones form when explosive cyclogenesis (or bombogenesis) with the rapid deepening of its barometric pressure occurs and the pressure change of at least 24 millibars within 24 hours is observed. 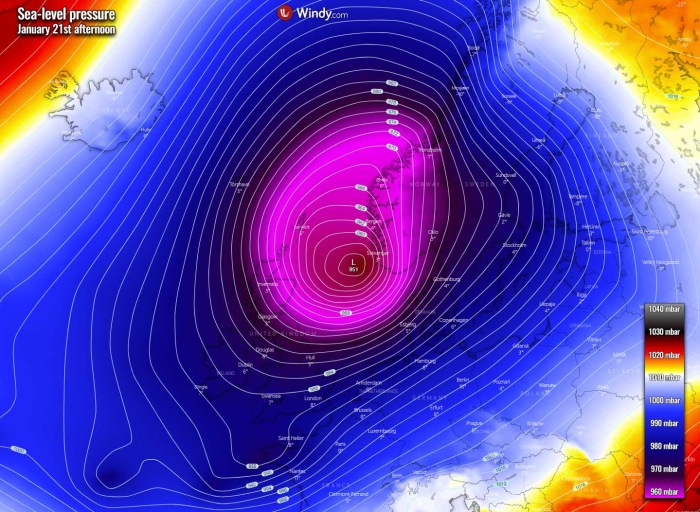 Rain associated with the first Storm Christoph will persist for the rest of Wednesday and into early Thursday across the UK, with some more intense rainfall possible before the activity vanishes. An additional 20-30 mm is likely, with more than 60 mm over some higher ground areas – bringing totals since Tuesday into the range of 100 – 200 mm over some hills. 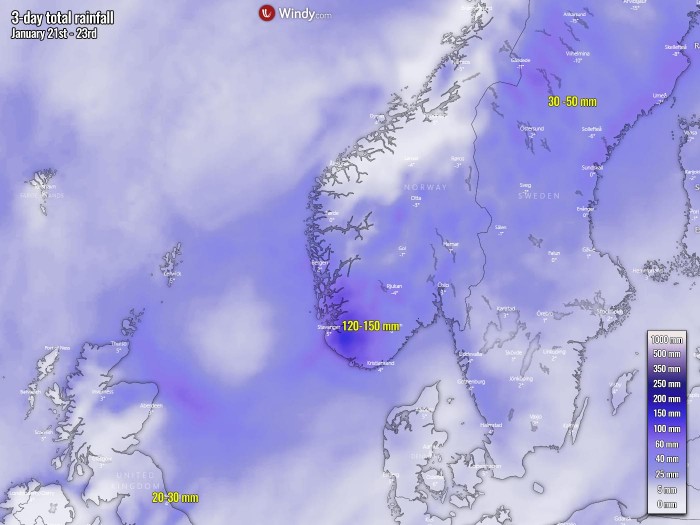 Homes and businesses are likely to be flooded in parts of the UK, causing damage to some buildings. Fast flowing or deep floodwater is likely, causing danger to life. Delays and some cancellations to train and bus services are likely. Spray and flooding probably leading to difficult driving conditions and some road closures.

A lot of precipitation is also expected across Scandinavia, especially across southwestern Norway where 120-150 mm of precipitation is likely through Friday night. Thanks to the persistent general southwesterly flow, causing the orographic rain/snow in the mountains. But also due to the major winter storm moving in through Thursday. Precipitation will the most intense on this day.

Travel delays on roads are likely, stranding some vehicles and passengers. Power cuts are possible, as heavy wet snow and severe winds could knock down trees.

More rain is also likely over the weekend as another Atlantic storm will push into western Europe. Worsening the flooding conditions peaking up in these days.

The greatest impact by the winter storm Geatan will hit the UK and Ireland through Wednesday night (tonight) into early Thursday when the system rather explosively strengthens, emerging into the North Sea. Its central pressure is likely to fall very near 950 mbar or even slightly lower.

Another impact with rapidly strengthening Gaetan will also be violent, severe, near hurricane-force winds along the southern portions of the low moving across the North Sea. It appears likely that the highest gusts there could reach 80-90 mph on Thursday. Those winds will blast the coast of extreme southwestern Norway, together with a high near 32-35 feet waves. 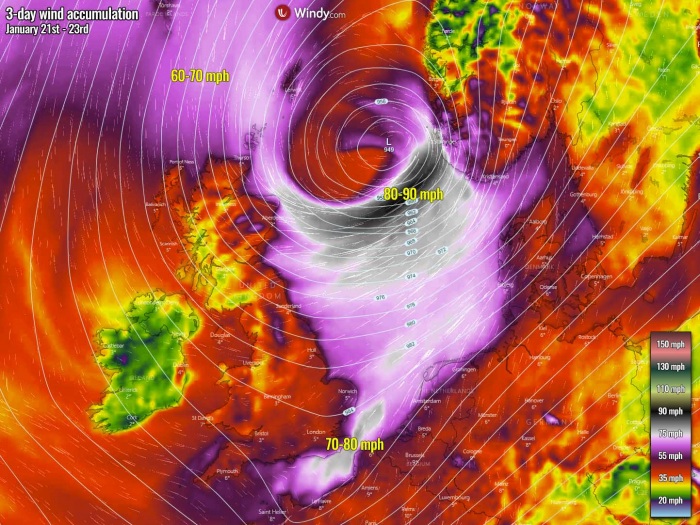 Channeling flow through the English Channel and along the coast of southern England, as well as northern France, Belgium, the Netherlands, northwest Germany, and western Denmark could also bring severe winds. Those could be damaging in places.

To the northwest of the storm, severe northerly winds will spread across the Faroe Islands and towards northern Scotland.

When storm Gaetan emerges over the North Sea, its violent strength will also push a lot of moisture and winds towards southern Scandinavia. A major winter storm will develop into Sweden and Norway, dumping *huge* amount of snow over the next three days.

The greatest impact is likely across southwestern Norway, with 75-100 cm expected there. Snowfall rates will be gradually intensifying through Thursday and become the most intense into the evening hours. Thanks to the strongest pressure gradient, winds, and moisture advection at that time.

Heavy snowfall will spread across much of southern and central Norway into central Sweden.

A lot of snow is also forecast through Thursday night into Friday as the frontal system and snowfall over Scandinavia will also extend further northeast. Although the low will be weakening along its track towards north-northeast and will gradually slow down and stall along western Norway on Friday into Saturday. 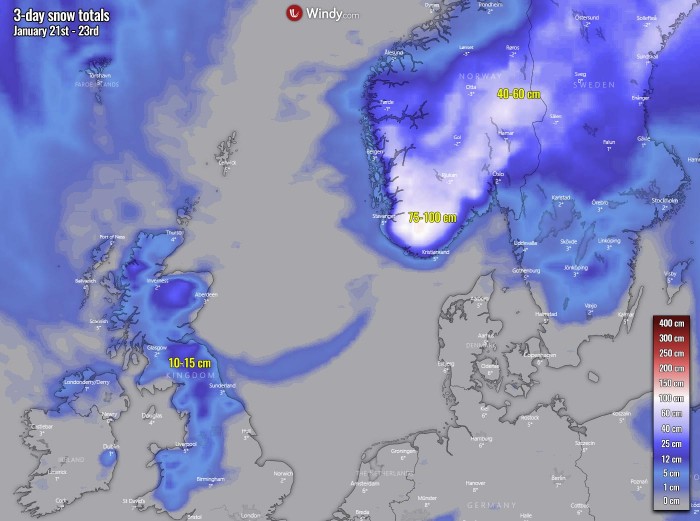 As the winter storm strengthens across the North Sea on Thursday, the intensifying winds will introduce blizzard and blowing snow conditions. Therefore, locally reducing visibility to near zero and bring whiteout conditions. Huge amounts of snow should also lead to high snowdrifts and impassable roads in many areas across south-central Norway and central Sweden through Friday.

Northerly winds in the wake of the deep low will also bring snow to Scotland. A good amount of snow is also possible across northern England, as well as some fresh snow also in higher elevations across Wales. 20-40 cm is also likely across the Scottish Highlands.

SIDE-EFFECT: WARMTH SPREADS ACROSS THE CONTINENT

The size of this deep depression over western Europe will be quite large, so its effect will actually dominate a large part of Europe. While cold advection is being spread in its wake across the Atlantic, strong warm advection is underway on its front side. This means warmer weather is returning to the European continent. 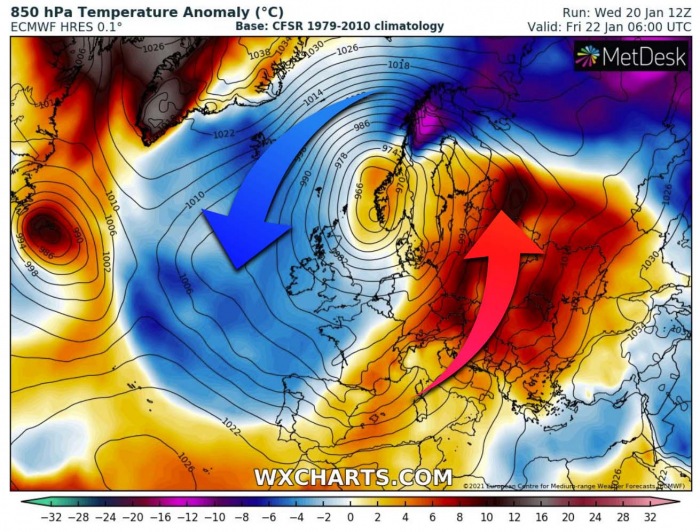 The greatest effects will begin on Thursday as the low deepens. And strengthens even more through Friday into Saturday when much warmer air mass overspreads a broad area from the Mediterranean sea across central into eastern Europe. As well as the Baltic region and western Russia.

Notice also extremely positive anomaly over Greenland and the Labrador Sea. This is the effect of the strong blocking ridge over the polar region, resulting in a strongly descending air mass towards the surface. Causing layers to warm up into nearly 15 °C warmer temperatures than normal.

***The images used in this article were provided by Windy, Wxcharts, and Vedur.