Weather across Europe has been quite warm (even exceptionally warm over the northern Europe and Arctic region) and is expected to continue for another week across most of Europe, except western parts and parts of Mediterranean where more dynmic pattern is expected. A powerful ridging pattern should dominate north, east and central Europe through most of this week, while trends are towards the strengthening ridge over the Atlantic through the weekend into next week – this would bring a change into colder weather over our continent again.

A strong and extensive upper ridge remains over the eastern Europe and western Russia while higher geopotential heights are also expected across the western and central Europe. A large upper low is located over the Iberian peninsula and western Mediterranean, resulting in unsettled conditions and cold weather. Very warm weather with 10 °C too warm airmass remains over the eastern Europe.

Similar pattern as early week continues until Thursday, with strong ridge to the eastern half of Europe expanding across west-central Europe while large upper low with two embeded vorticity maximums remains over the southwest Europe. Rainy and cold weather will continue there. Some colder weather will also be across the British Isles.

Hints in changing pattern are foreseen over the next weekend, as strong ridge across the eastern Europe starts to weaken, but ridge is strengthening over the northern Atlantic. Upper low over southwest Europe weakens and moves towards Canary islands. Warm weather spreads across the western Europe.

Next week after Oct 23rd

Global models are hinting in a possible significant pattern change towards the end of October as a powerful ridge could develop over the northern Atlantic and establish more meridional flow from the Arctic region towards south. This would bring much colder weather, but too many uncertainties exist for more detailed outlook so far ahead. 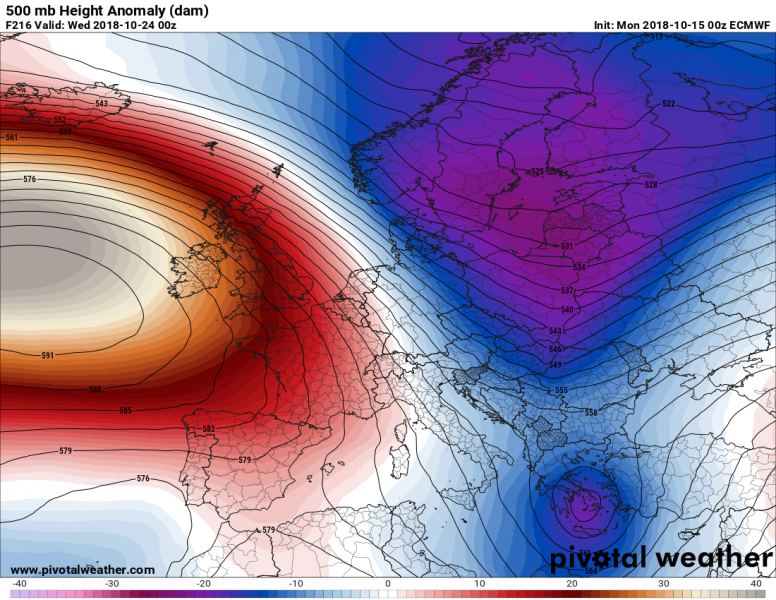 We will be covering separate setups more in details with other posts – stay tuned in the coming days!