February is the last official winter month. That doesn’t mean that you can’t have cold and snow in spring, but for proper winter weather that lasts more than a day or two (unless you live further up in the north), this month is your last bet for significant winter weather. And this February, the bets are really all in, with a near-record strong Arctic and North Atlantic Oscillation. Video below shows the current progression of the airmass over Europe, with a cold-warm phasing.

We usually hear a whole lot about these “oscillations” every winter. One is AO, the other is NAO, then we have QBO, PNA, EPO, WPO, ENSO, SOI,… The list could be endless. What are these oscillations in reality and why are they important? Oscillation generally means that something is oscillating, meaning to move back and forth. In weather and climate studies, this “movement” is usually up or down, the rising and dropping of a certain weather parameter. It can be the rise and fall of atmospheric pressure, temperature, sea surface temperature, wind direction, etc… Arguably the most famous such oscillation is the Arctic Oscillation or the AO for short.  The fact that we call it “Arctic” oscillation, means that it describes the rise and fall of pressure in the Arctic region. This means that by looking at the state of the Arctic Oscillation, we can determine the state of the atmospheric circulation and weather patterns. Arctic oscillation (or any other) is used ad an “index”, just like at Wall Street. It means that it is used as a quick first assessment of the circulation state, just by looking at one value of this index, instead of going through various weather maps. If we see that the Arctic Oscillation is currently, let’s say, -5 or +5, we tend to know right away what the atmospheric circulation might look like and what weather patterns to expect around the North Hemisphere. We can also make a forecast for these oscillations, and if we have a 10-day forecast of the AO index to be +4 or +6, we know somewhat what to expect. 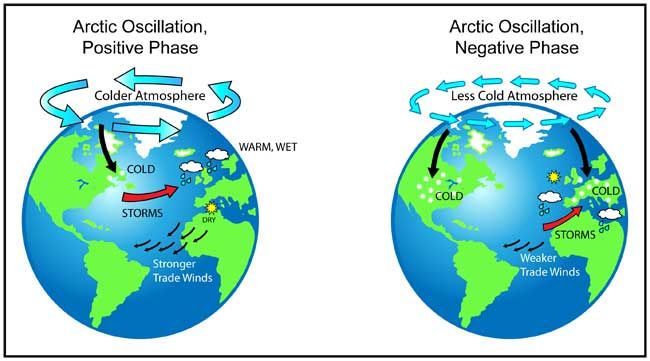 We created a simple graphic, from the AO index and 2-meter temperature. We made a so-called, “correlation”. This is a very simple concept. We basically compare two values (an index and a parameter in meteorology), and we can determine what is their relationship if any. A positive correlation means, that as one value goes up, so does the other. And a negative correlations means that as one value goes up, the other one goes down. The maximum possible correlation is -1/1, which you could interpret as a 100% match in one way or the other. Here we can see how the temperature changes along with the AO. This graphic can be interpreted as temperature tendency (warmer/colder) during a positive AO in February. It is very obvious that a positive AO means warmer/mild conditions for Eurasia and colder conditions in the North Atlantic and eastern Canada, as well as in parts of the western United States. This is something that you do not want to see in winter if you live in Europe or the eastern United States. We have to add that nothing is 100% in weather, so there can still be cold shots in Europe and the eastern United States during a positive AO in specific situations, but under a strong positive AO, that is only possible perhaps during some quick system transitions for a day or two at max. 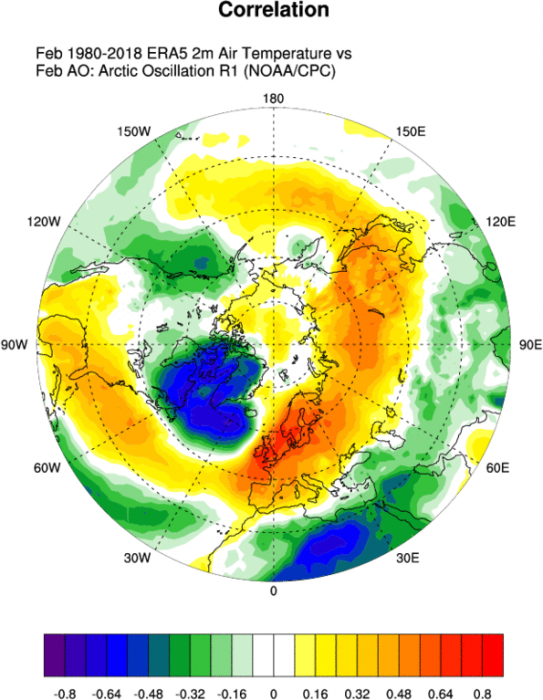 Current AO index forecasts call for a very strong positive AO phase, which, as we can see above, does not spell much good for winter in Europe, or parts of eastern and southeast United States. We can also see, that since the start of the winter, the AO has been mostly in the positive phase, reflective of the generally more mild winter overall across the Northern Hemisphere.

Another famous (and very important) index is the North Atlantic Oscillation, or the NAO for short. Similar to the AO, this index describes the atmospheric pressure, but it describes the difference in pressure between the Icelandic low and the Azores high. Since the North Atlantic region extends into/around the polar circle, the AO and the NAO are quite strongly connected but have their own modes of calculation. We also made a correlation plot for the NAO, which shows the connection between the NAO index and sea level pressure (SLP). We can see that the positive NAO features lots of low pressure in the North Atlantic and higher pressure south in the Azores region. This pattern amplifies the jet stream and sends the mild Atlantic airmass into the European continent. This limits winter potential over Europe as it is pushing the colder polar air up to the northeast, away from the continent. This is also a pattern with many strong windstorms over northern Europe. On the other side of the Atlantic, it can actually be beneficial for Canada, as the cold air is being pulled from the north on the backside of this deeper low-pressure system. In a negative NAO, we usually have a blocking high in the North Atlantic, and low-pressure systems traveling around it, creating an active cold air transport from the north. A strong negative NAO is what every winter lover wants to see on both sides of the Atlantic. 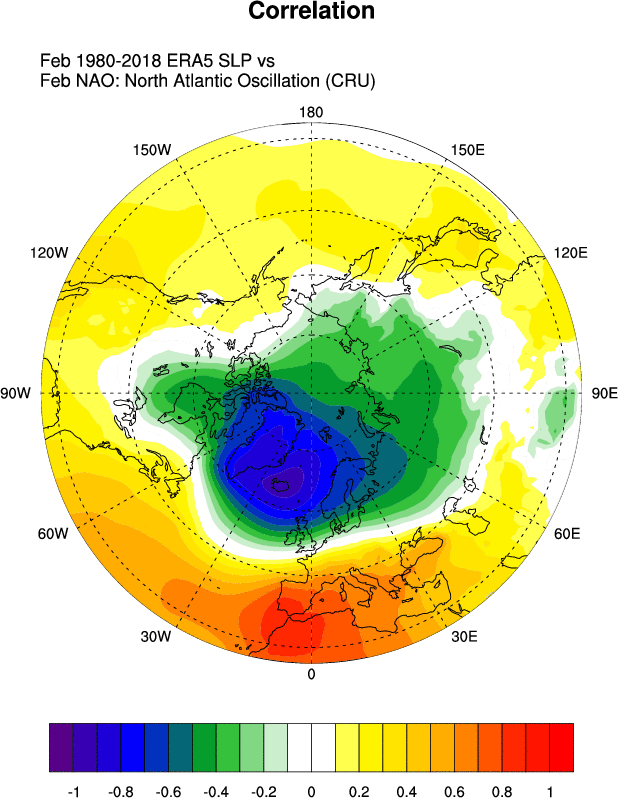 Current NAO forecasts tho, show it to turn strongly positive. This is a no-go for winter over Europe, with only transitional cold air passes likely, as sometimes the low-pressure systems that move across northern Europe, pull somewhat colder air down over the continent on their rear end. 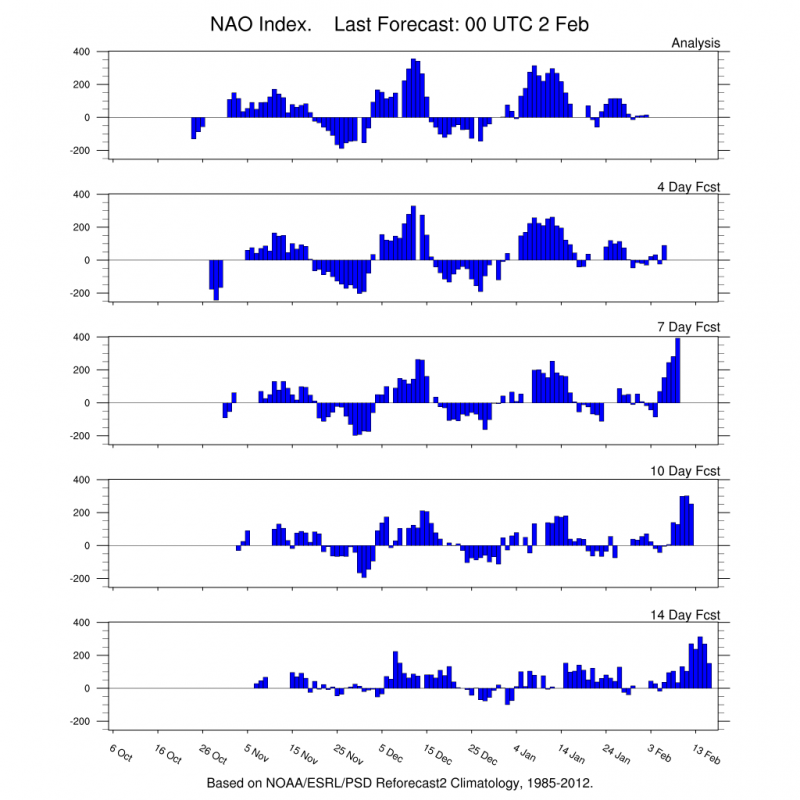 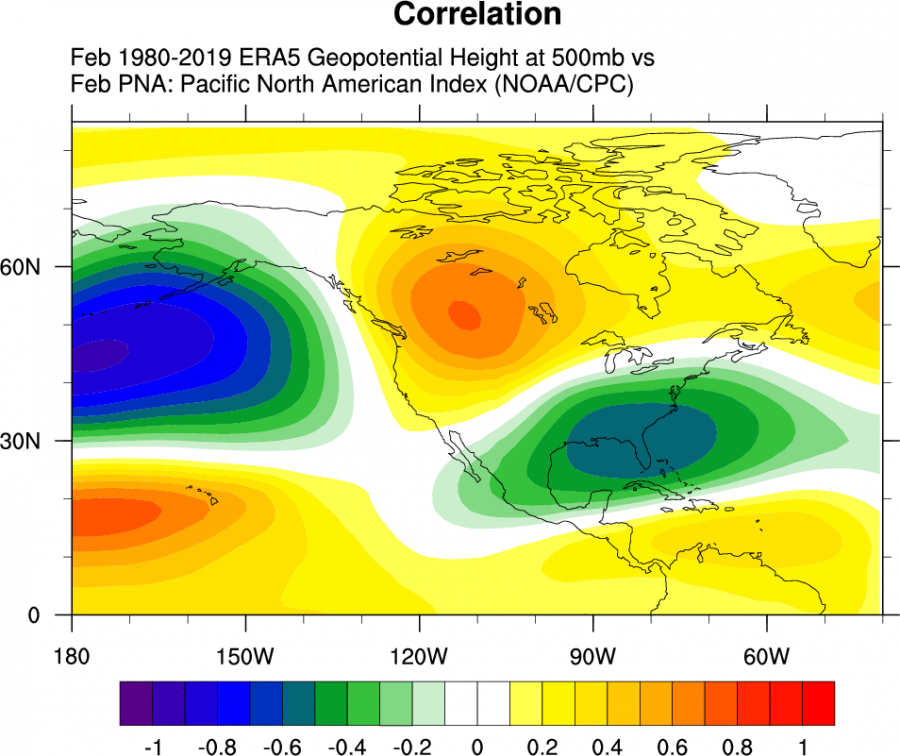 What that means for temperatures, is, of course, colder weather over the eastern United States and warmer across much of the western half of North America. This, again, is for the positive PNA phase. 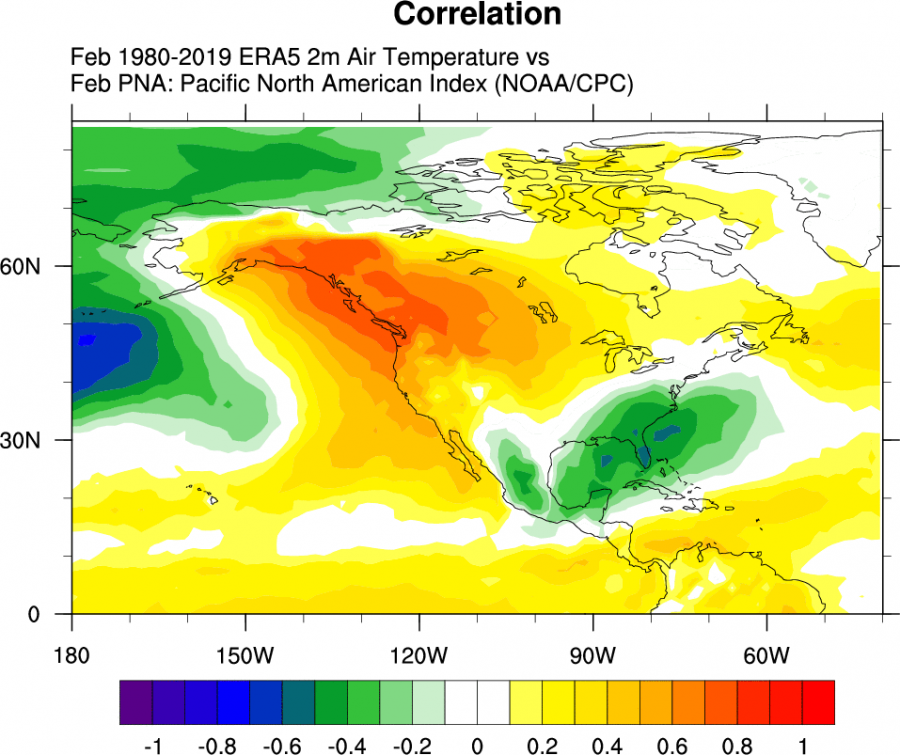 Current PNA forecasts take it into negative values. This means the opposite of what we see above. It means colder air and lower pressure in the western parts and warmer temperatures in the SE United States. The graphic shows 4 oscillations, two of which (PNA, NAO) we already described. We will leave the other two alone for now, so we do not complicate things even more. 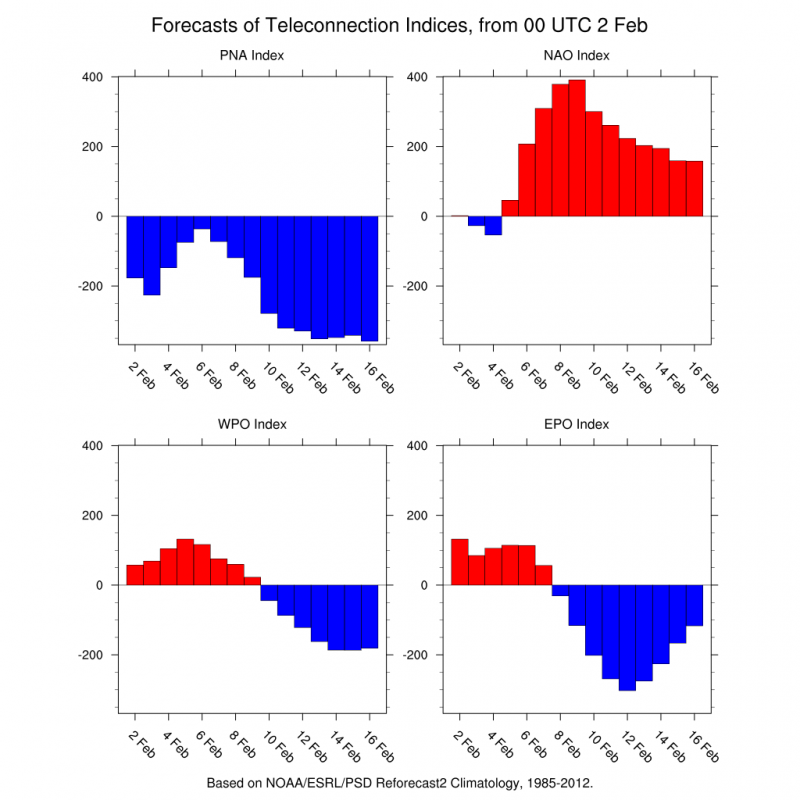 We now know what these oscillations are and how they work. But can we actually see this on the actual weather maps? Of course we can. Early next week we already see the positive NAO pattern, and also a negative PNA pattern over North America. This generally means milder weather into Europe and the SE USA, but enables colder air transport into NW USA. 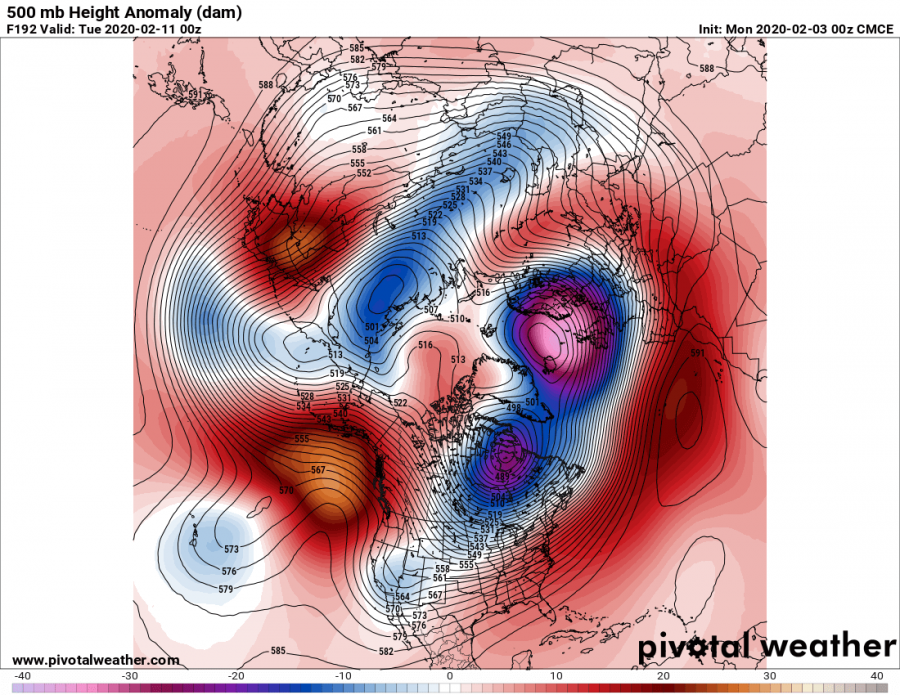 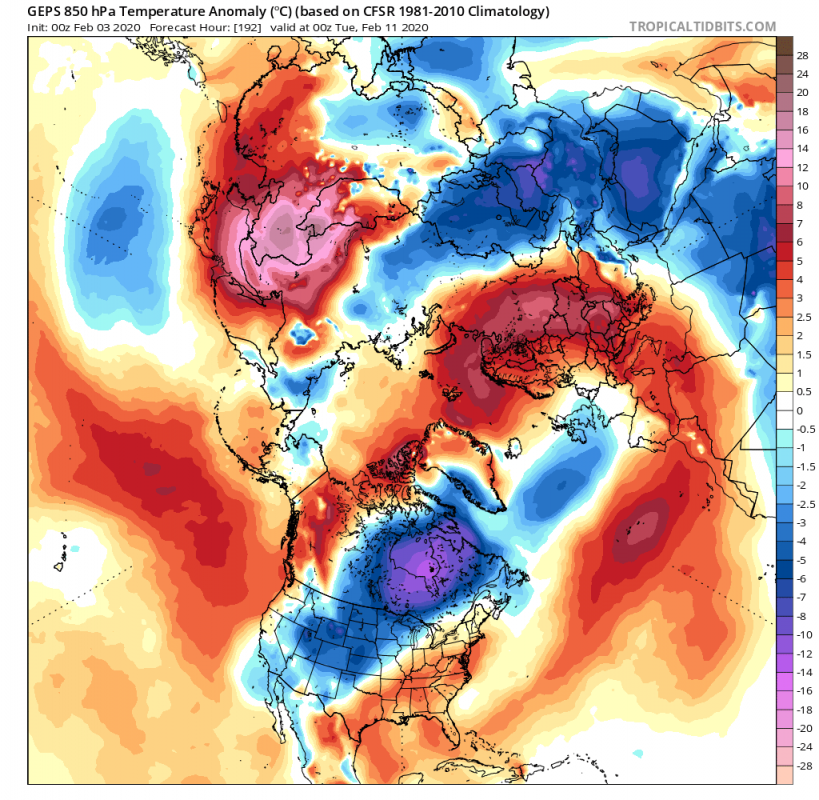 Mid week, the pattern persists, and some of the colder air is expected to also reach into parts of NE USA. The strong deep low that will pass northern Europe early next week, will pull some colder air behind, over the UK and Ireland, but it is not a strong cold air blast by any means. This deep low is partially what will drive the AO and the NAO to such high positive values, so we can now see first hand, how this “index” corresponds to milder weather, via such low-pressure systems. The index is actually calculated from the weather circulation itself. 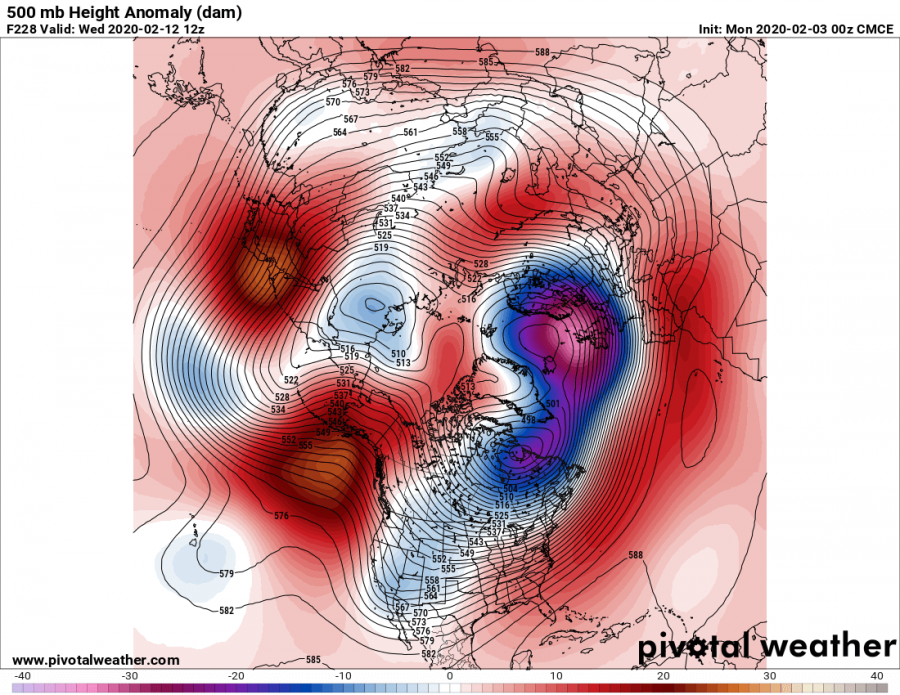 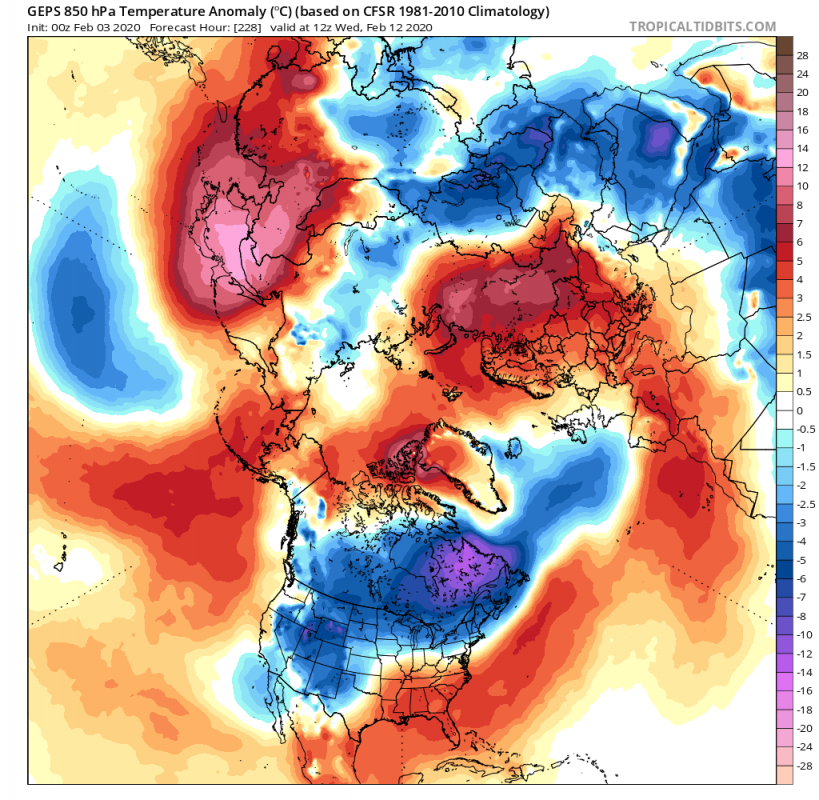 By the end of the week, the pattern stabilizes, and we see almost an exact same picture as on the plots we made above for various oscillations. The warm SE USA, cold NW USA is a typical negative PNA pattern, and warmer Eurasia is a typical positive AO style. 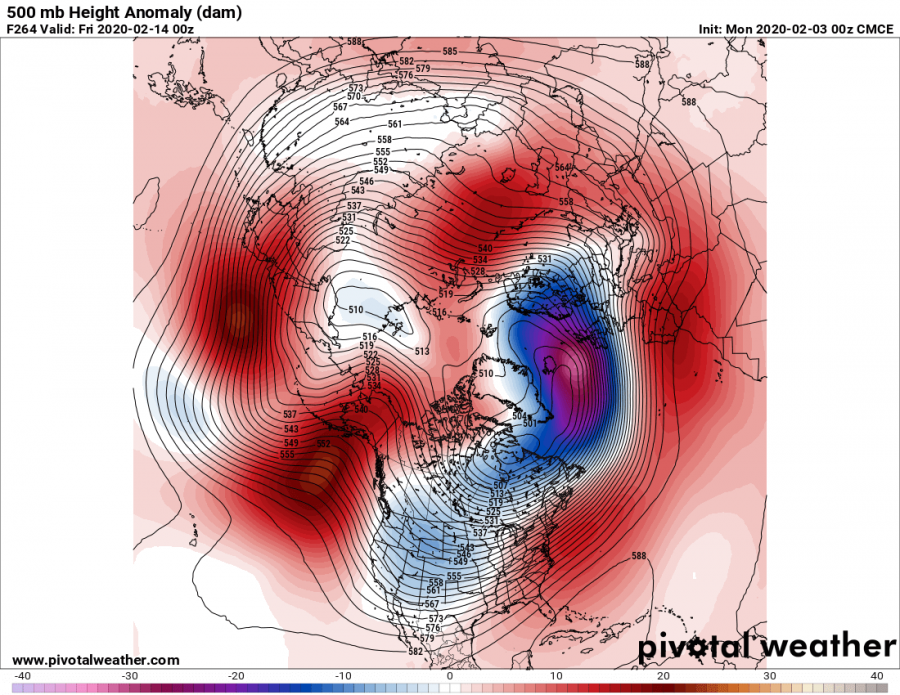 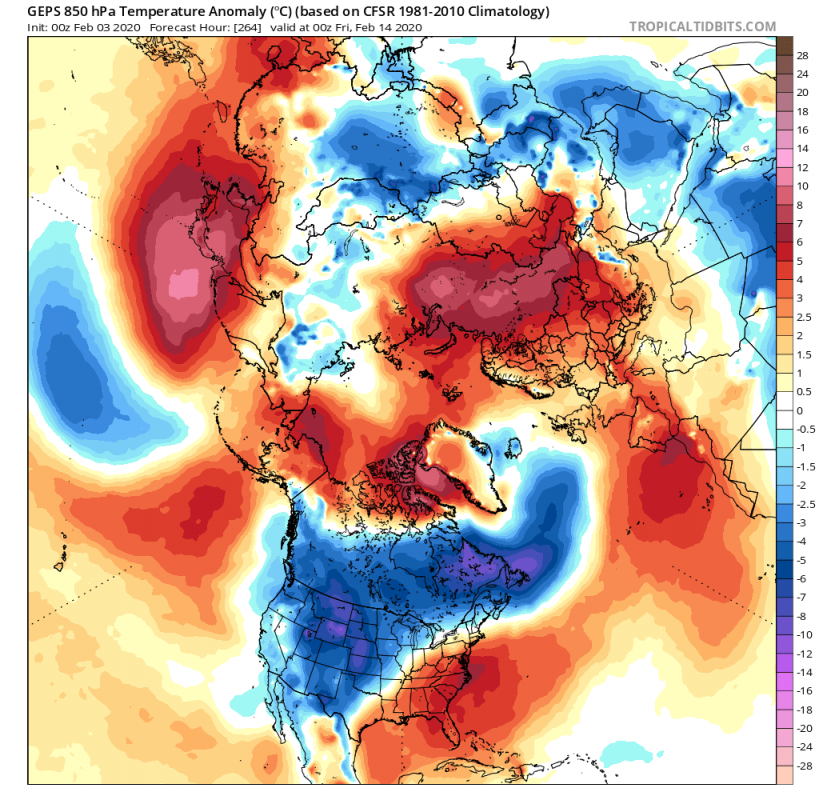 By the end of the next week, we have the typical positive NAO pattern and negative PNA. This does seem like a very stable situation for now, which prevents strong deep cold outbreaks into SE USA or into Europe. A transitional brief cold phase is possible, but not long-lasting. 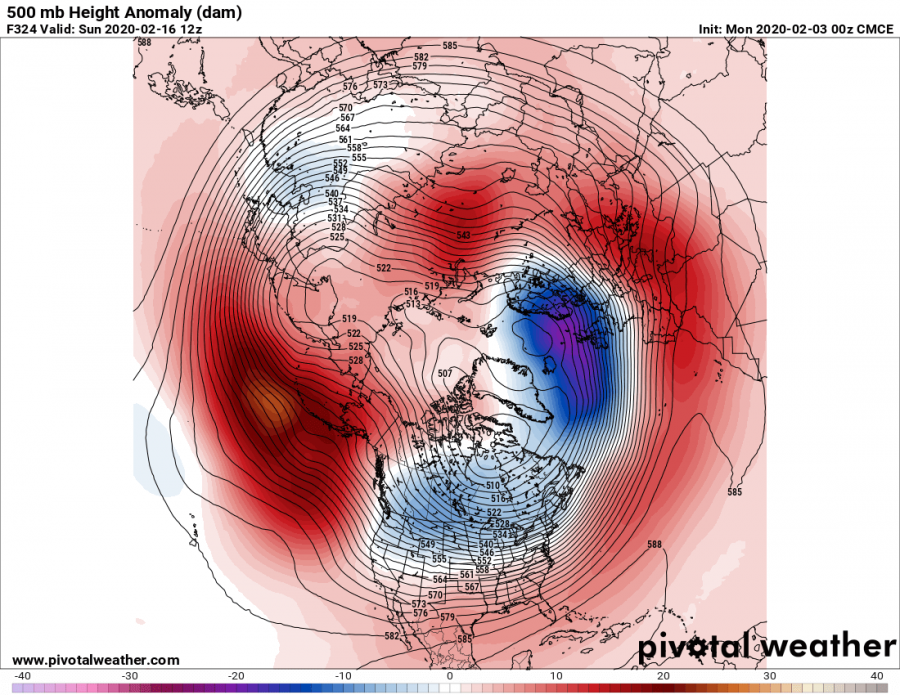 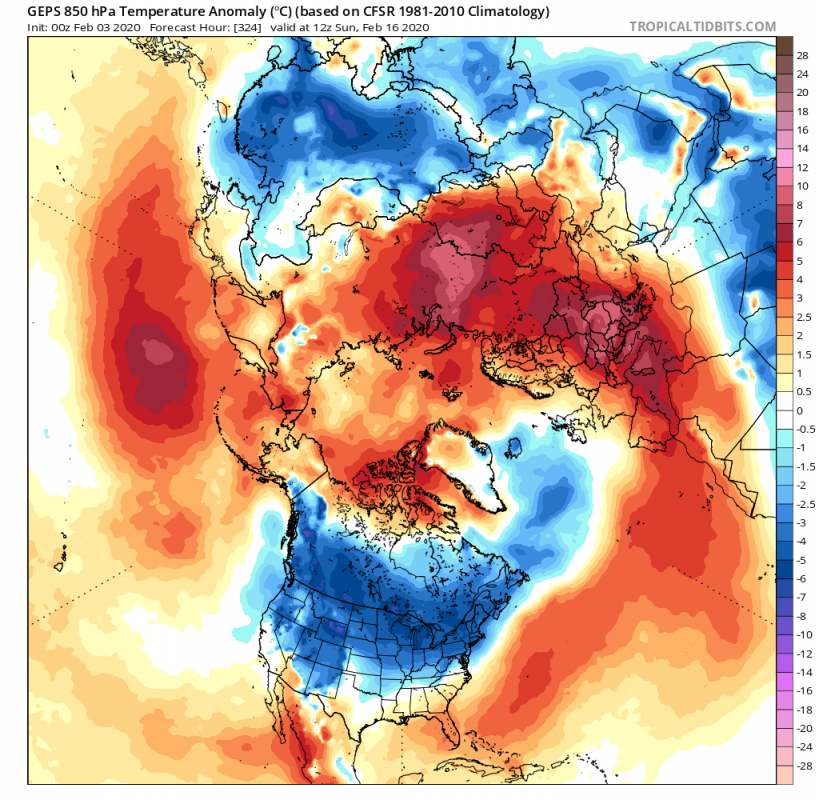 To summarize, the developing pattern promotes what we have seen a lot this winter. Milder conditions over Europe, with normal to below-normal precipitation in central and southern Europe, and wetter and windy conditions over northern parts. Over North America, we have the negative PNA dominating, promoting colder weather over Central Canada and also extending into eastern parts. In the United States, we expect the SE to be under a more milder flow, while north and western parts will be more exposed to colder northerly flow. The central area can see a bit of both worlds, as low-pressure areas transition across the country. In the NE USA, some colder air is generally likely, as a more northerly flow could establish, as discussed above. All in all, it seems this is the pattern that winter will end upon by the end of February. There is still a lot of room open for the second half of February if some specific dynamics would be involved.

Rest assured that we will keep you updated on any important further development. While you wait for more updates, don’t miss the early Spring 2020 and February long-range outlook, where models have hinted at exactly such development: