Overall, winter was rather mild across much of Eurasia and North America, with the exception of Alaska and parts of Canada. But, that means that a lot of cold air has stayed in the polar circle, helping to freeze more of the Arctic ocean and the surrounding areas.

The latest sea ice analysis shows that during this rather mild winter in the mid-latitudes, the trapping of the colder air in the polar circle was beneficial to the growth and recovery of the polar icecap. Every winter the Arctic ocean freezes, reaching a maximum sea ice extent around March. below is the graphic from NSIDC, showing the ice growth progress and a comparison with 2012, which had the lowest sea ice extent on record in September. We can see that the freezing season began at rather low levels, lower than 2012, but the stronger than normal polar vortex has helped to keep more cold air in the polar regions, promoting ice growth. The second graphic is a temperature anomaly analysis for the polar circle, showing the colder than normal phases during winter, and especially currently, greatly aiding in the sea ice growth process. 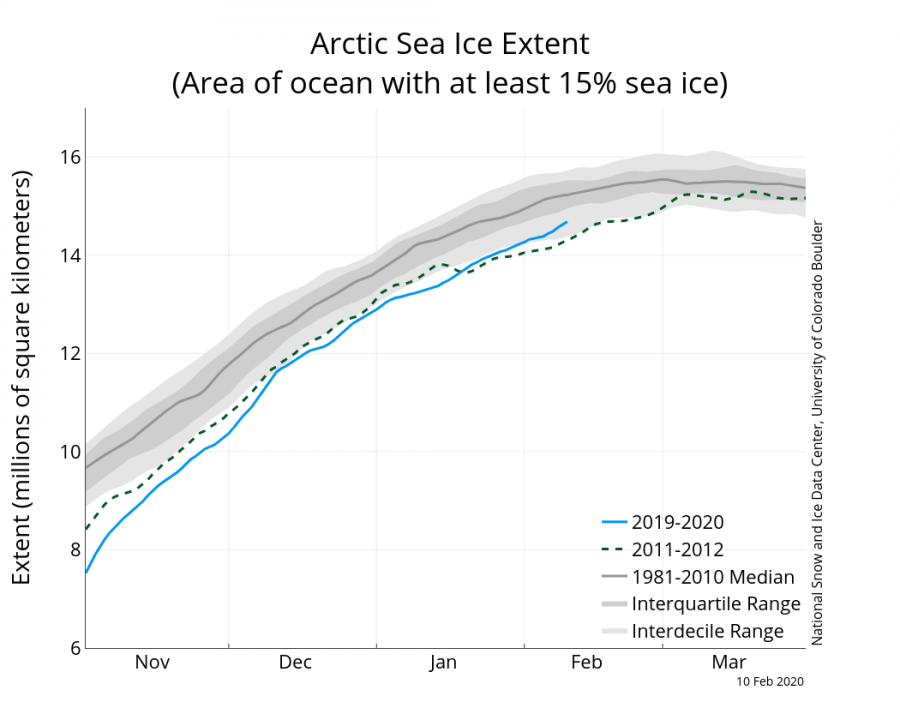 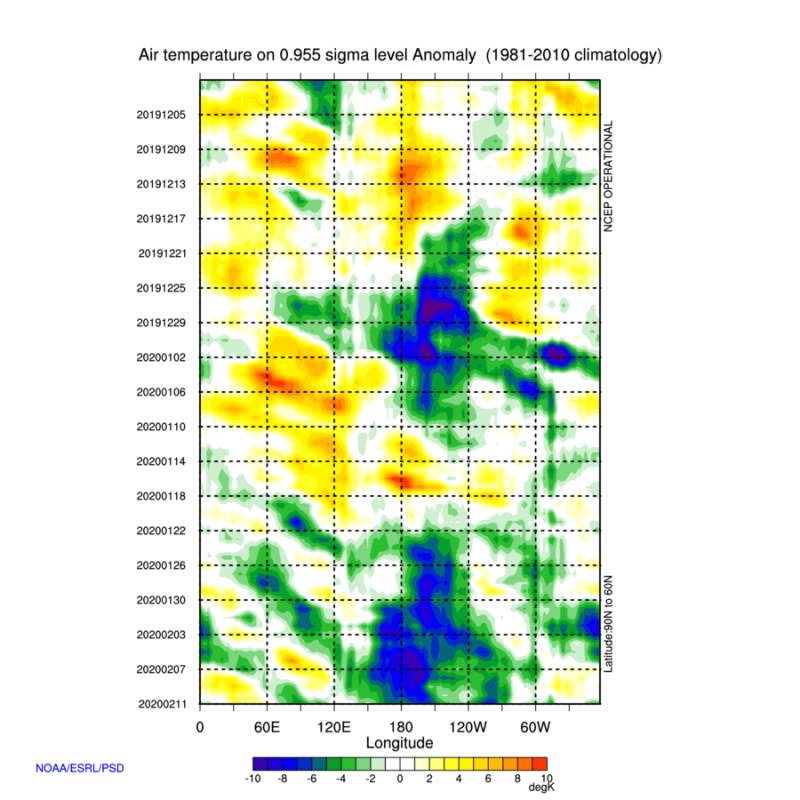 Below are two animations, produced by SWE from the MERCATOR ocean analysis dataset. We can see the rapid growth of the ice cap, and also how the ice thickness increases over time. 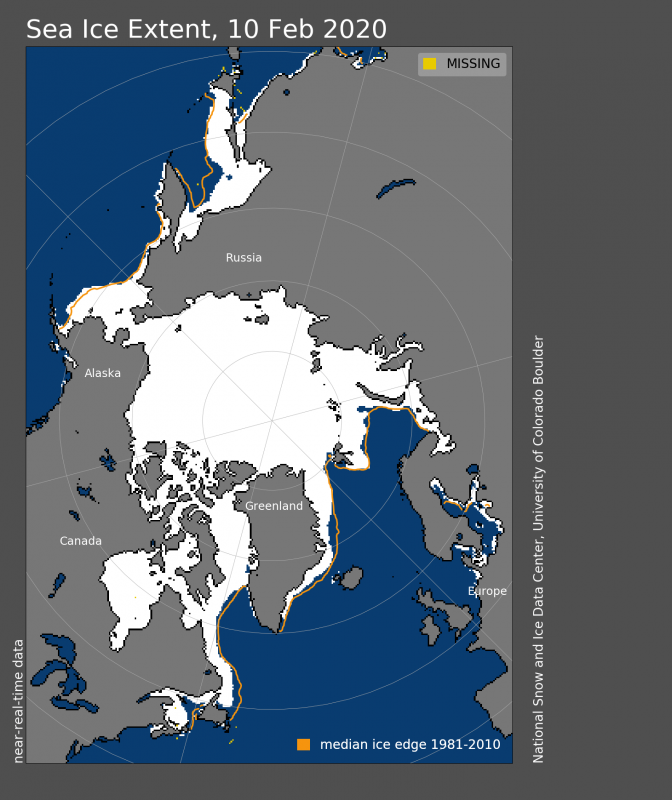 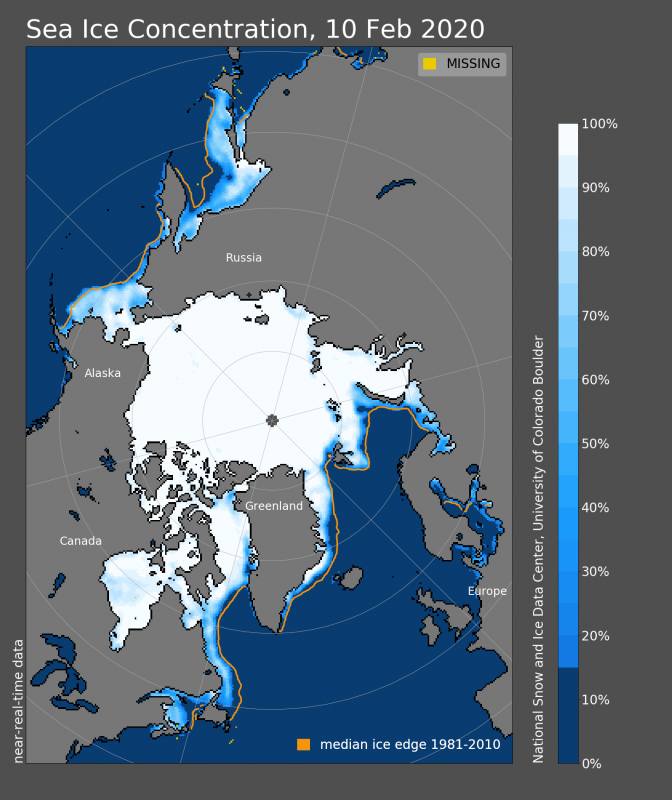 Looking at concentration in finer resolution, the ice cap is in pretty good shape. There are lower than normal concentrations on the outer edges, lacking behind the climatological averages, but compared to the past years, this is a very good concentration image. The ice thickness image reveals the oldest ice, as the thickest layer. Most of the outer, thinner ice is the fresh new ice, formed this winter. Most of it will melt during the warm summer season.

Speaking of previous years, when comparing to past years, we can see that there has not been such a large ice extent at least since 2010! A lot of it has to do with the favorable weather conditions this winter. In the past 20 years, 2020 is currently at the 7th largest ice extent for early February. It is just above the average extent of the 2001-2010 period. 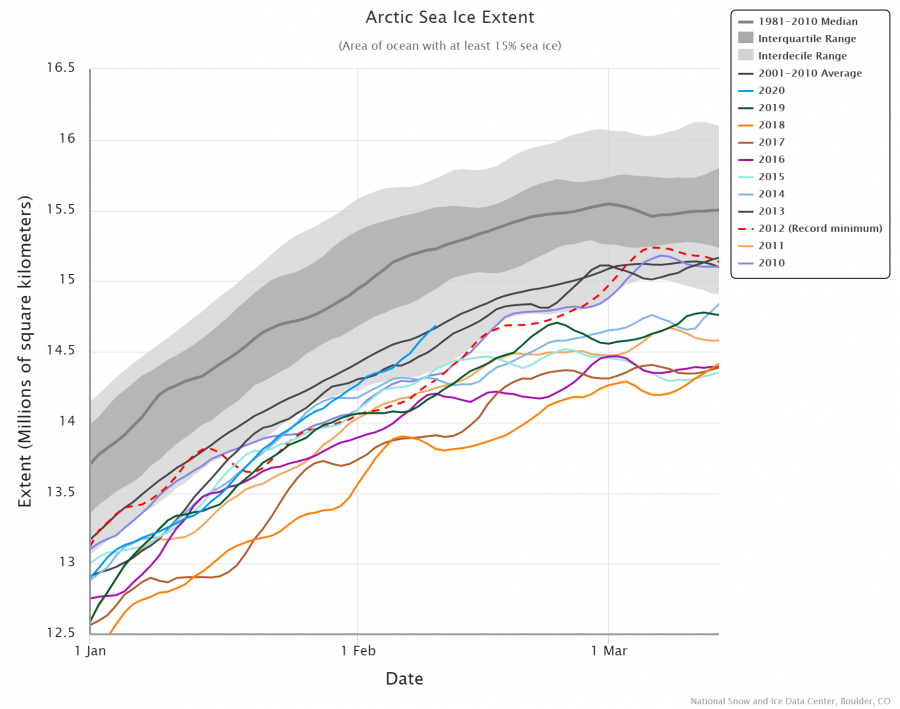 The model forecast actually shows the sea ice area growth extending into March with a similar pace. But the spring and summer forecast show one of the strongest melt seasons on record. This is still just a long-range forecast, but the sea ice forecasts are generally quite good at detecting melt season trends.

Meanwhile in the Atlantic… a very powerful extratropical cyclone is developing:

Here is the animation of wind gusts by ICON-EU model, with violent winds expected across the North Atlantic in the coming days.

*BREAKING* An incredible temperature high of 18.3°C (65°F) has been measured in Antarctica! This is possibly the highest temperature on the continent since the last interglacial period!