The strengthening upper-level ridge across west-central Europe is underway, the atmospheric pressure has already risen towards 1050 mbar across parts of United Kindom. The mid-1040s are reported across France, Benelux and W Germany, near 1040 mbar over the Alps and Denmark. The highest surface pressure is expected tonight, likely reaching 1050-1051 mbar in some parts of England and Wales. The pressure is then expected to be slightly lower tomorrow but should significantly rise also across the central Europe and Balkans, likely peaking into 1047-1048 mbar overnight to Tuesday.

Surface pressure readings are already very high across the UK and Ireland this evening, reaching 1045-1049 mbar across Ireland, England and Wales. The pressure has been steadily rising since yesterday: 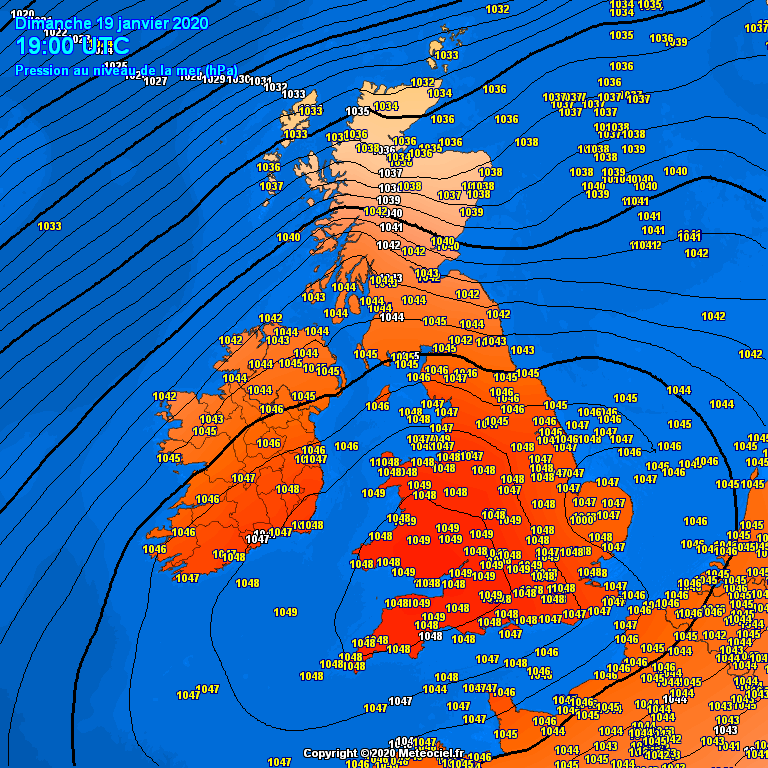 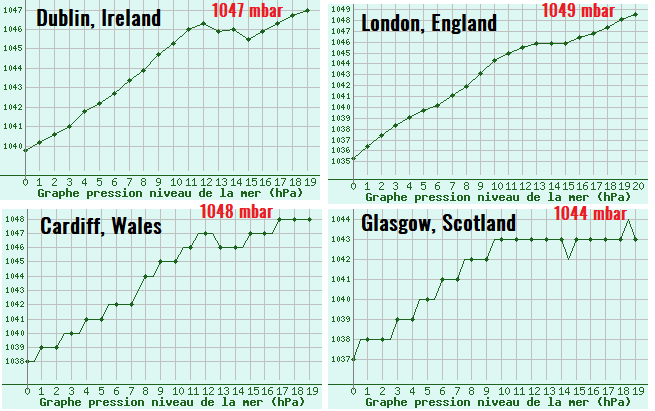 Upper ridge and the related surface pressure is strengthening across whole western and central Europe; extreme north France is already at 1048 mbar as well. Germany and Benelux are also reporting 1043-1047 mbar, 1040 mbar has been reached in Denmark, 1042 mbar in Austria… pressure continues rising across all these regions and countries. 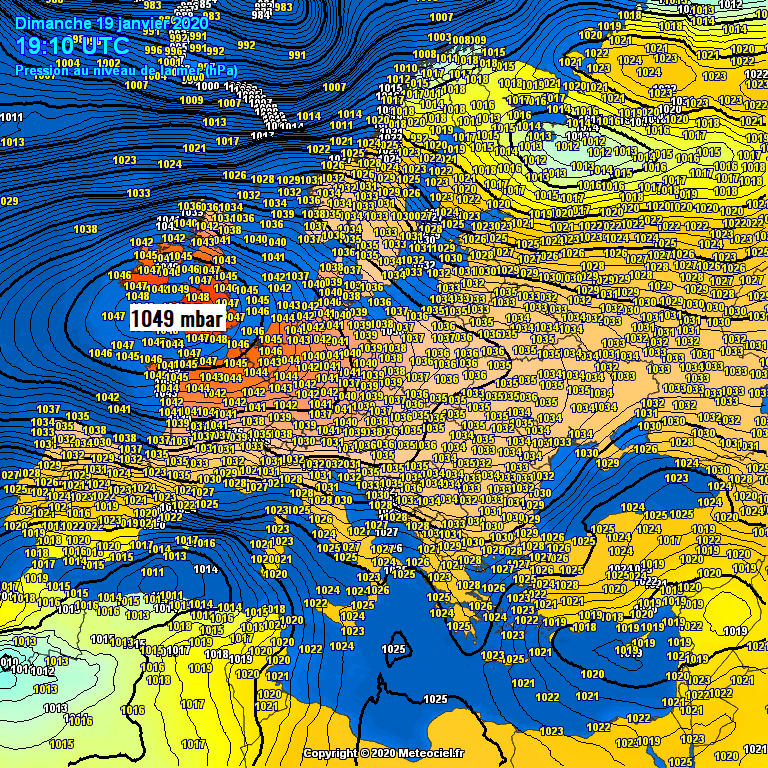 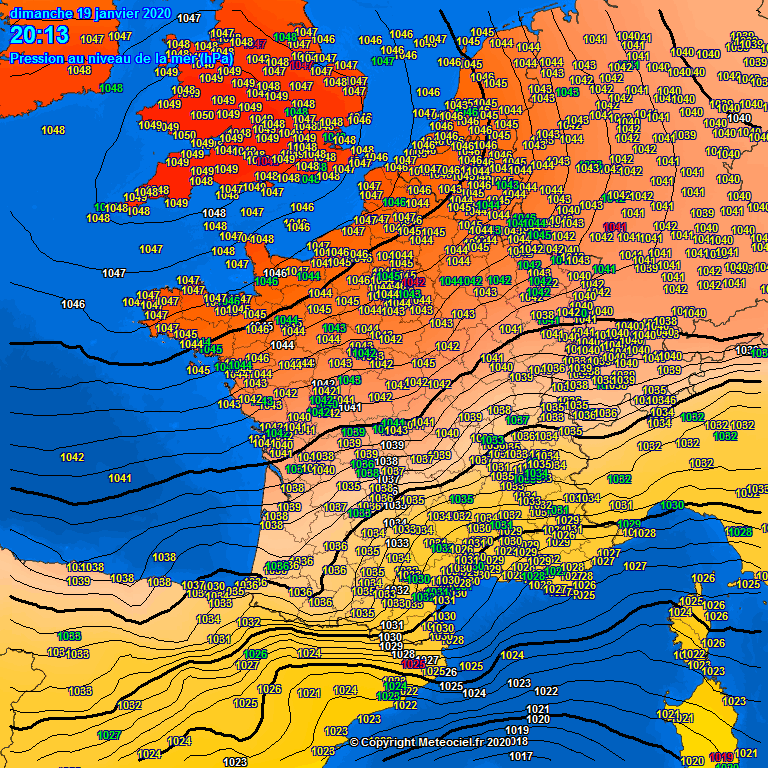 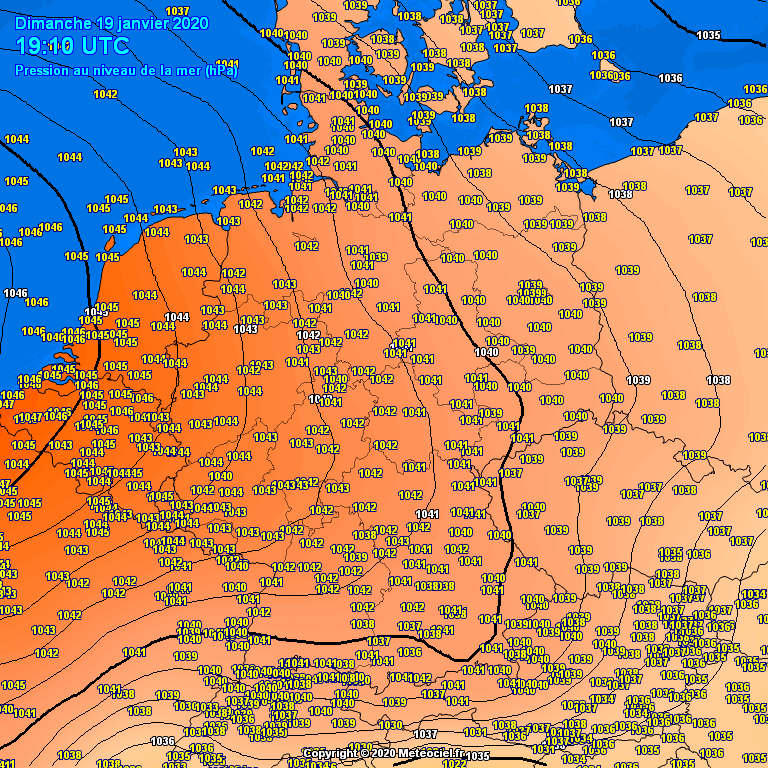 The future trends are more or less on track with the previous discussions – the high-pressure system is expected to peak tonight, during the early morning hours of Monday, Jan 20th, when pressure readings are likely to exceed 1050 mbar across parts of England and Wales. Cold night will help the pressure to rise. During Monday, pressure remains very high – 1045-1049 mbar – across western Europe while it begins to rise further across central Europe and the Balkans, peaking into around 1047-1048 mbar on early Tuesday. The ridge and an associated surface pressure system dominates most of Europe through Monday and Tuesday, becoming an elongated and extending from North Atlantic towards the Black Sea region. 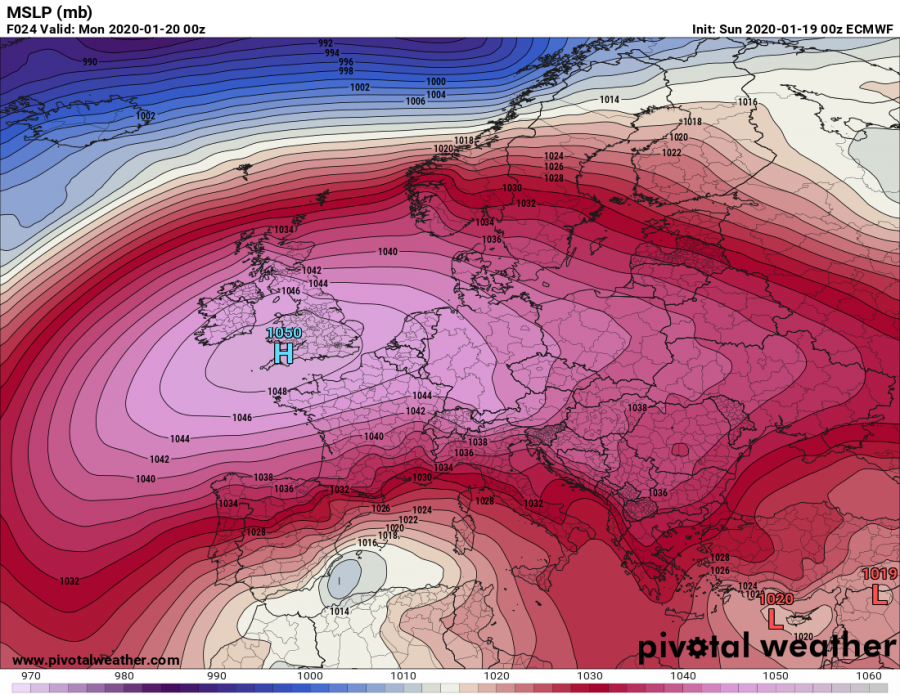 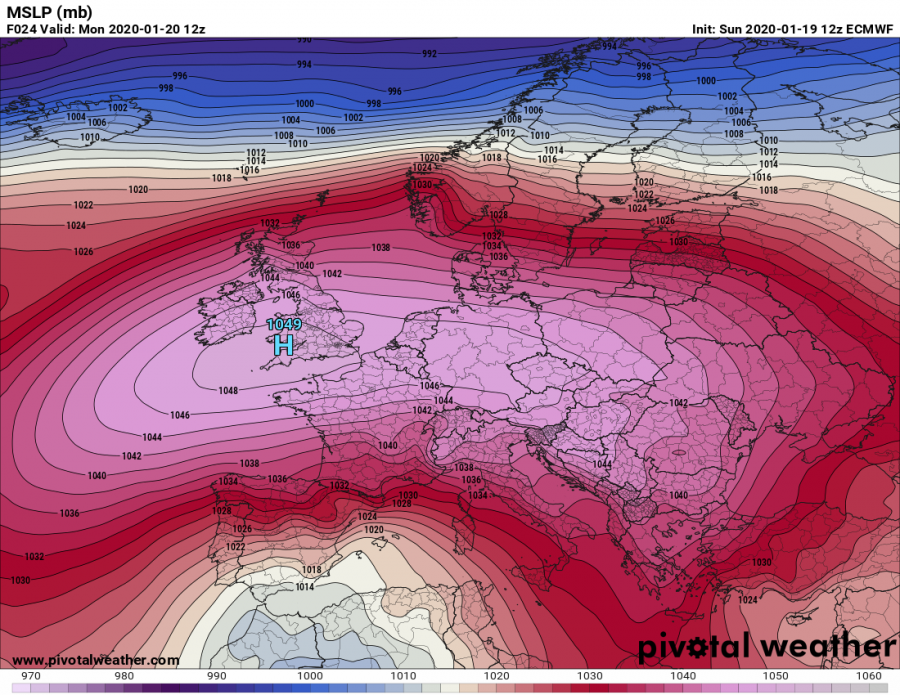 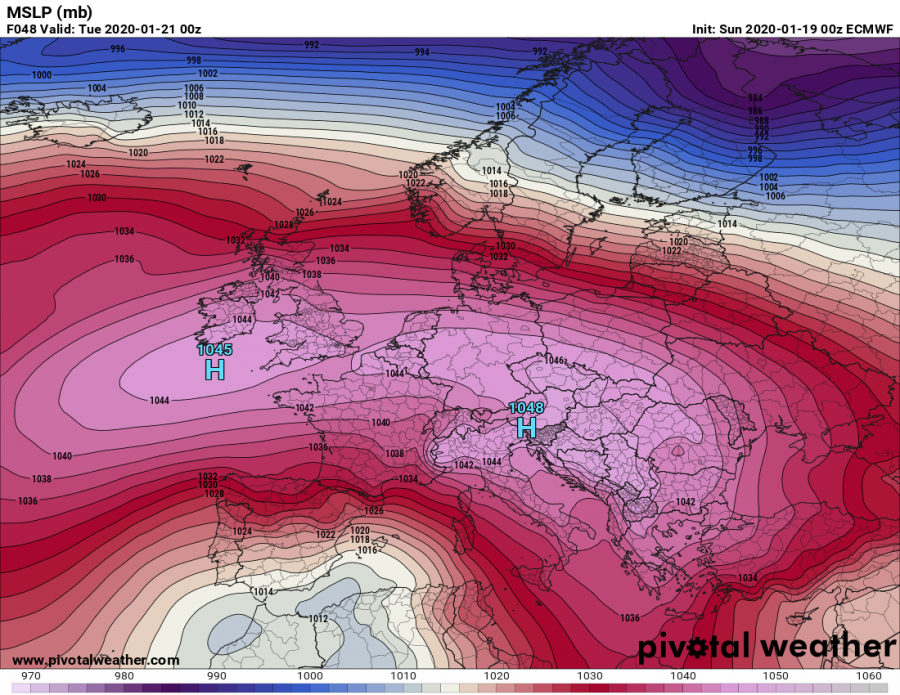 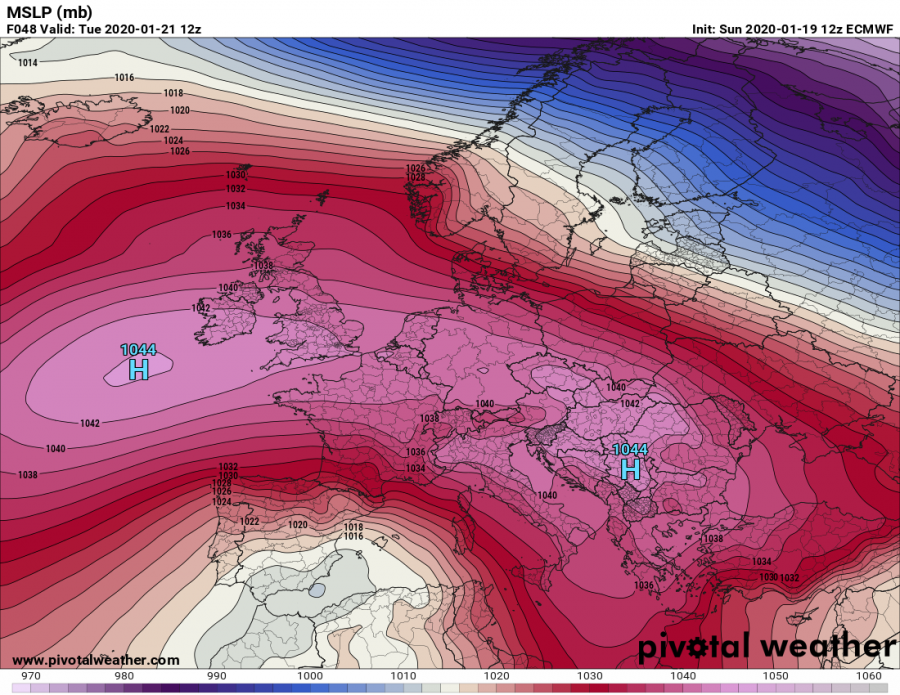 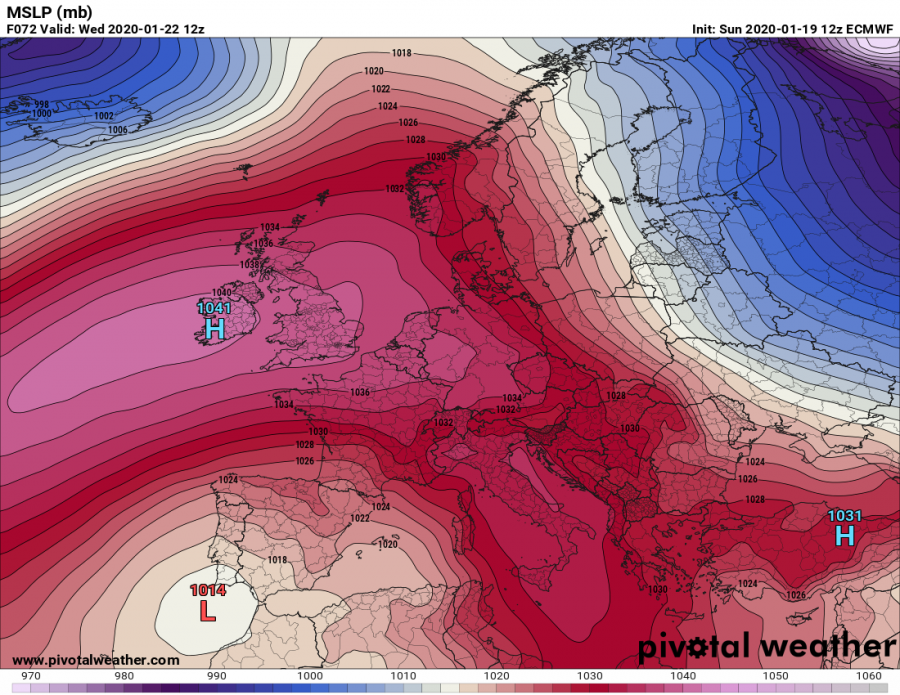 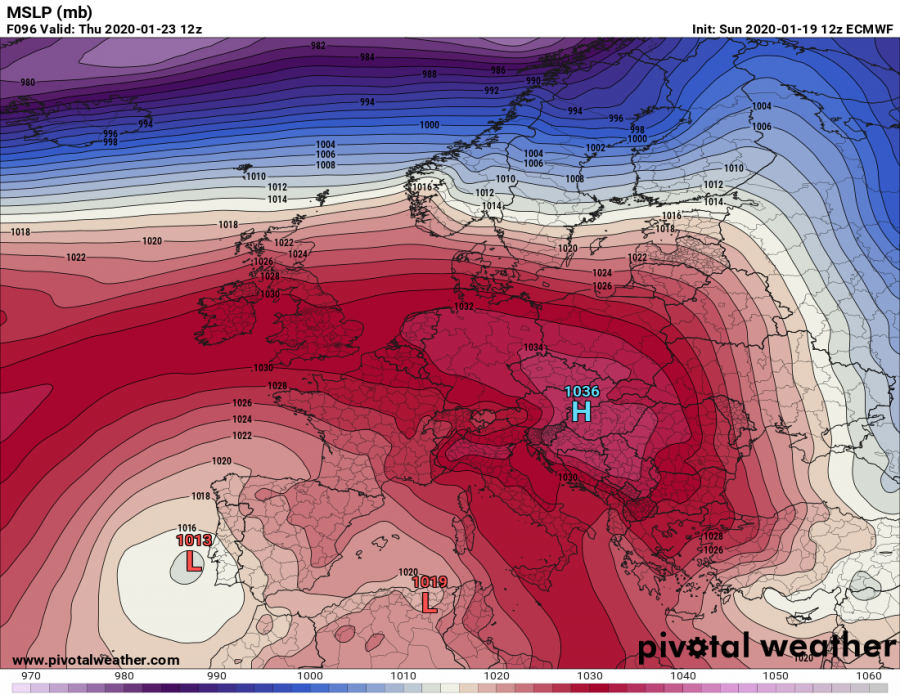 Zoomed-in view of the GFS model guidance across the western Europe where the center is seen:

Towards Tuesday, the surface high-pressure system become more elongated and expanding into central Europe and the Balkans – pressure reading from south-central Germany towards west-central Balkan peninsula will peak around 1047-1048 mbar during the Monday’s night:

We will be updating again tomorrow morning with the peak pressure readings across Europe – stay tuned!

In the meanwhile, see the previous discussions:

To the immediate south of the ridge, an intense upper low develops a warm-core cyclone in the western Mediterranean. The whole system is trapped over the Iberian peninsula and results in huge amounts of rain and enhancing flooding threat until Thursday: