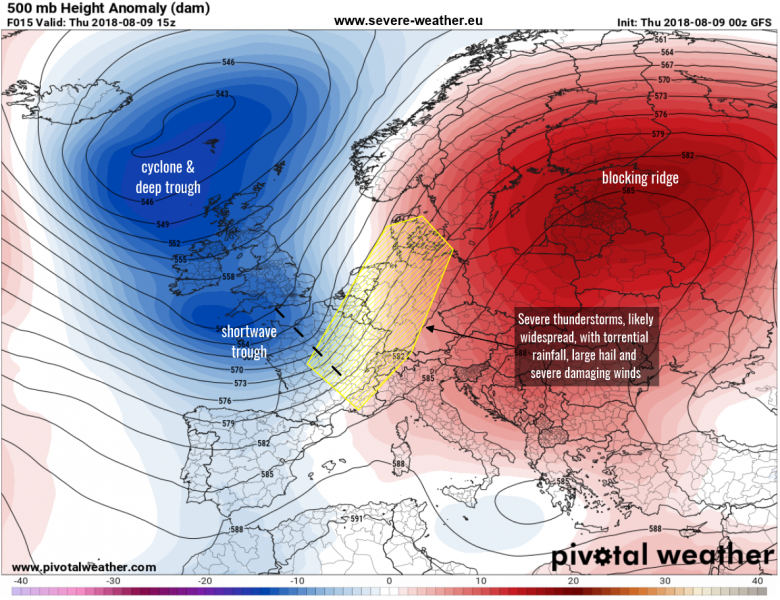 While strong convective activity is already ongoing across France where large storm clusters have initiated in the past few hours.

The environment ahead of the front is expected to destabilize further by the early afternoon, once the frontal boundary and widespread forcing pushes in. It is likely that the ongoing storms will maintain further NE while new storm development is expected, more discrete in nature ahead of the main surface front. 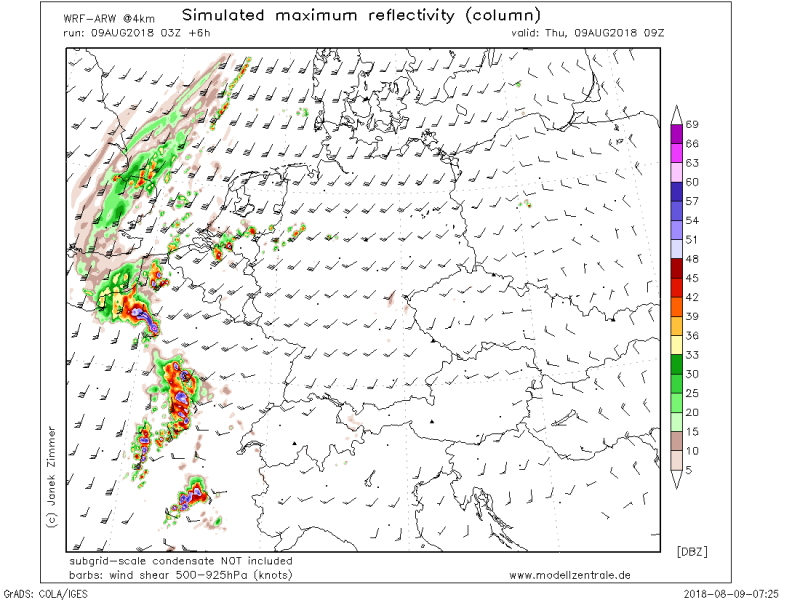 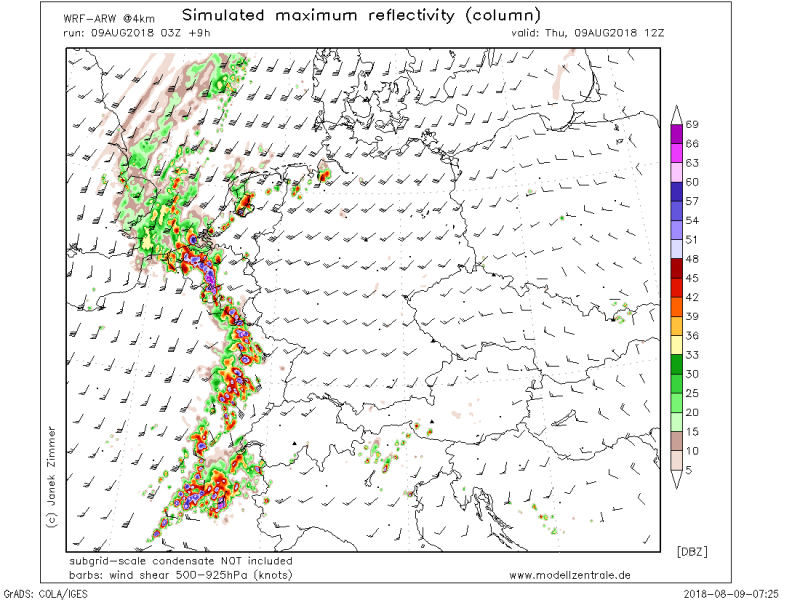 With moderate instability (MLCAPE locally up to 2000 J/kg) being overspread by strong deep-layer shear (35-50 knots), storms will organize into intense multicells and supercells. Good 100-200 m^2/s^2 storm-relative helicity will also be available, maximized over Benelux, closer to the surface low where low-level wind field will be stronger and with more easterly winds near the warm front. This suggests tornado threat cannot be ruled out there as well, as enhanced helicity and LL shear will support rotating mesocyclones closer to the ground. 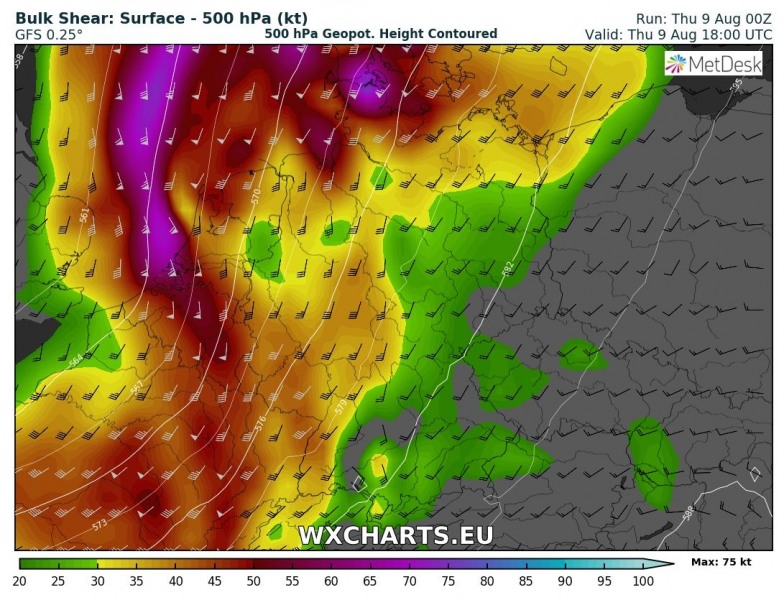 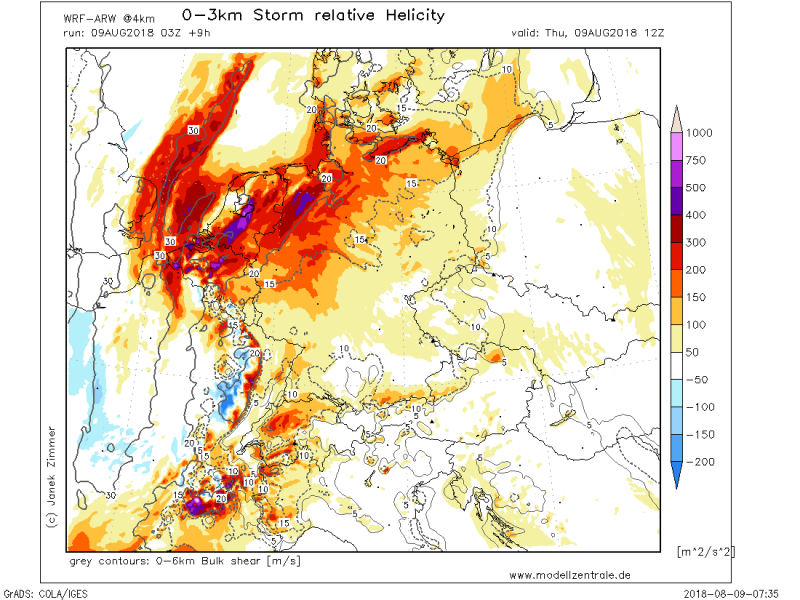 A various model comparison for instability, ARPEGE, GFS and ARW models are all pointing towards moderately strong MLCAPE available, locally even up to around 2000 J/kg by early to mid afternoon. 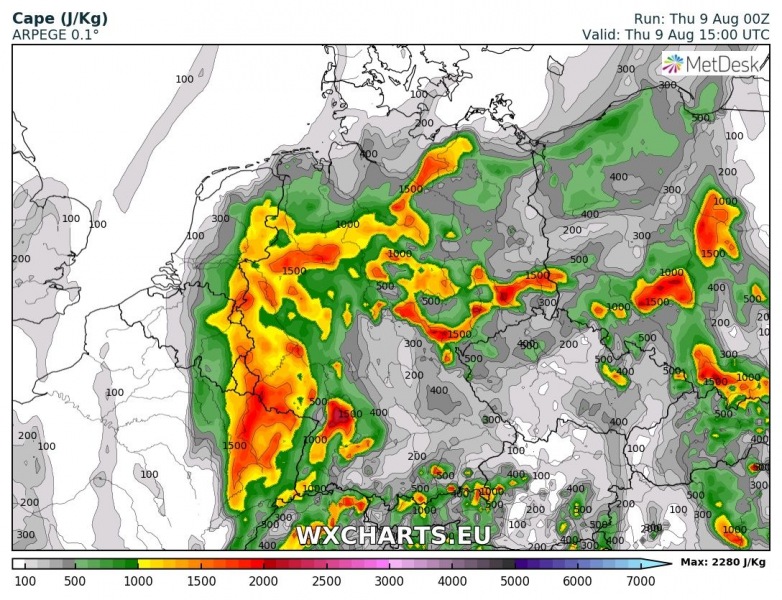 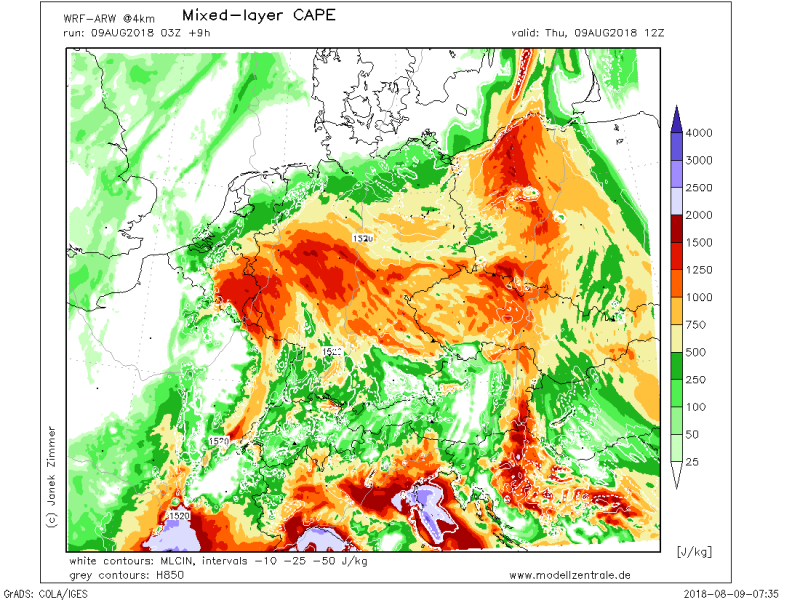 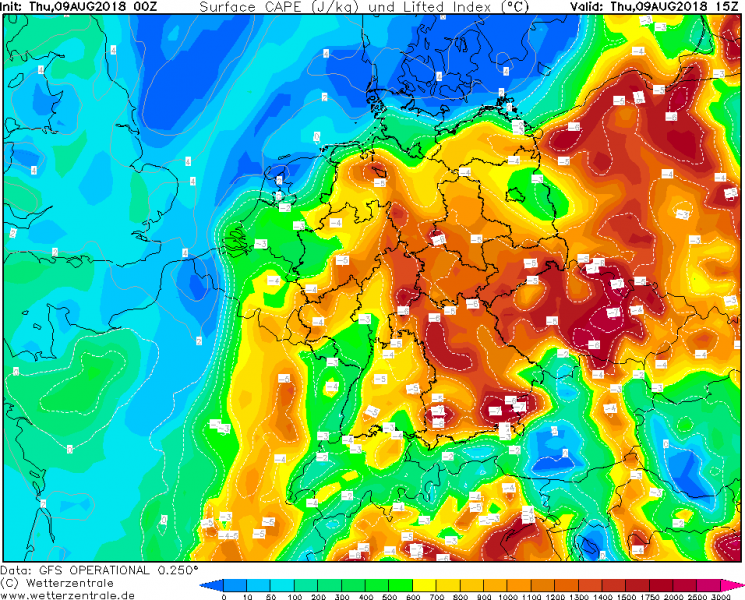 Storms will be spreading towards with time through the afternoon hours where undisturbed boundary layer heating should allow a persistently robust environment, so intense supercell thunderstorms are likely to continue into WNW Germany. 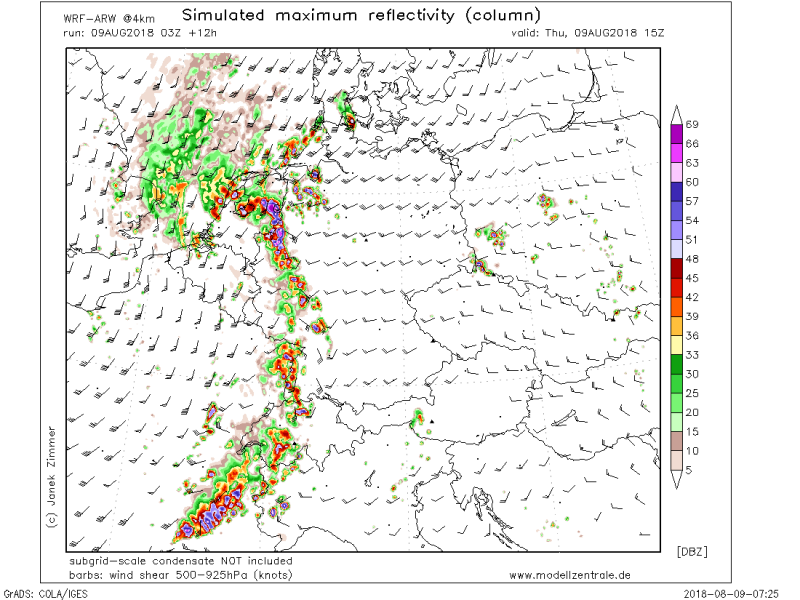 Some high-resolution models are also suggesting extremely severe wind gusts will be possible with the most robust storms. Gusts in excess of 120-130 km/h are not ruled out, especially if intense squall-line or bowing segments develop. A more unidirectional/speed shear does support such a threat. 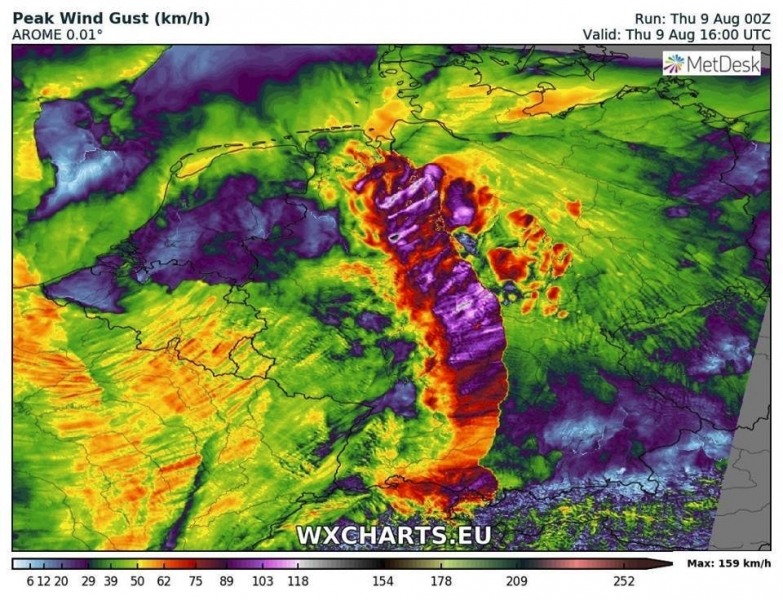 Later in the afternoon and evening hours, the frontal boundary and main activity pushes into N Germany where a corridor of strongly enhanced storm-relative helicity and low-level shear develops, as the window between the warm front and the progressing cold front narrows. This will establish an even more dangerous environment. With the strong easterly component of low-level winds, helicity could increase into 300-500 m^2/s^2 range which becomes supportive of strongly rotating (potentially tornadic) storms there. 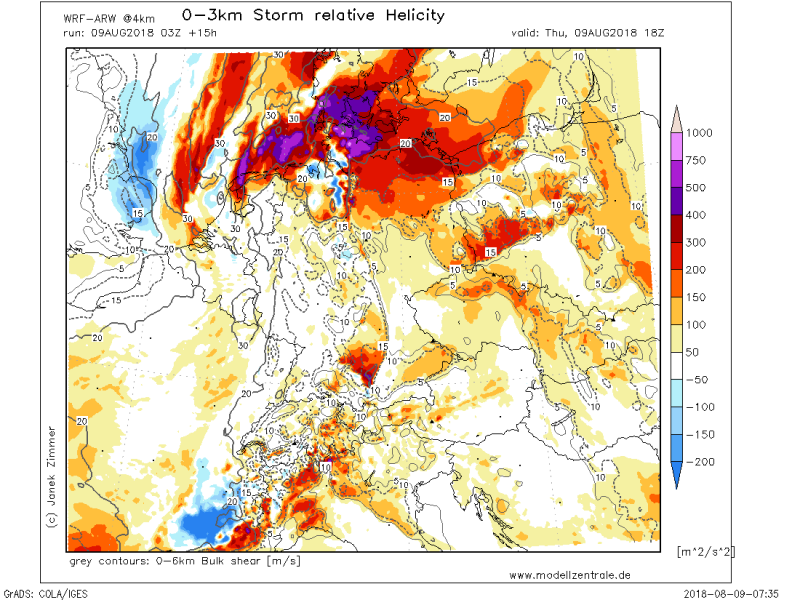 As there should still be more than 1000 J/kg of MLCAPE available into the evening and night hours, storms will maintain severe modes while spreading across N Germany towards S-SE Denmark and NE Germany through the first half of the night. 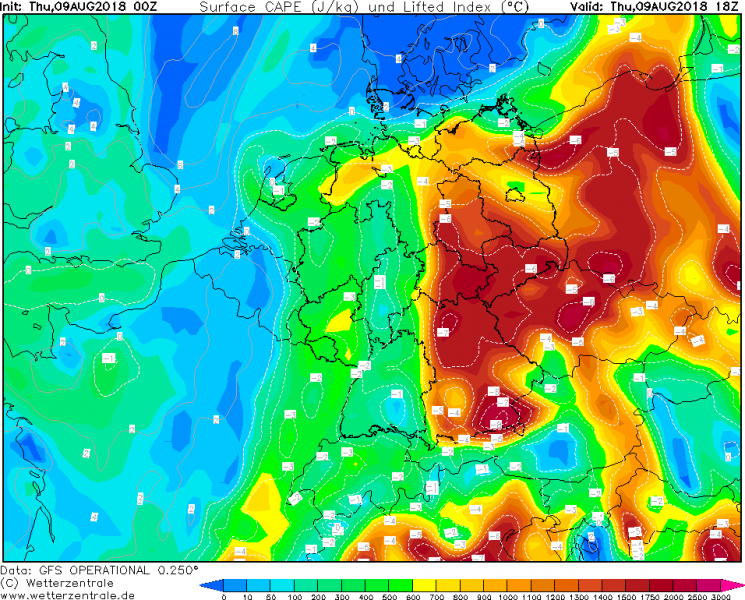 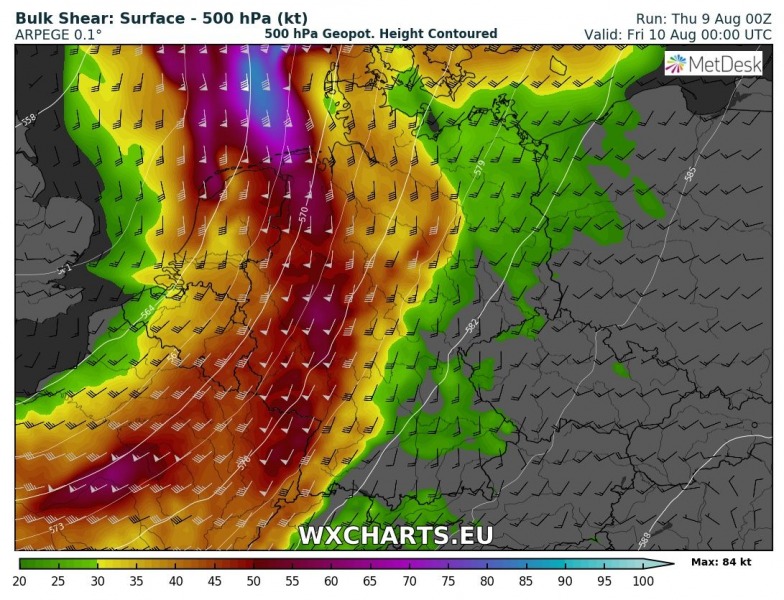 Simulated radar for 18 and 21 UTC time frames this evening: an intense line of storms moving across N Germany is indicated. Merging into larger clusters (MCS) is likely as well, which suggest the primary threats will be a widespread damaging wind gusts and excessive rainfall along their path. 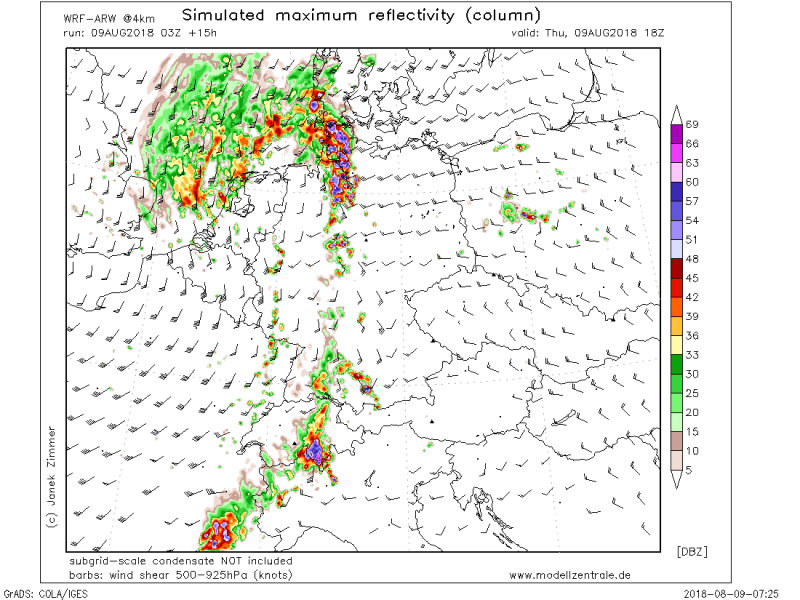 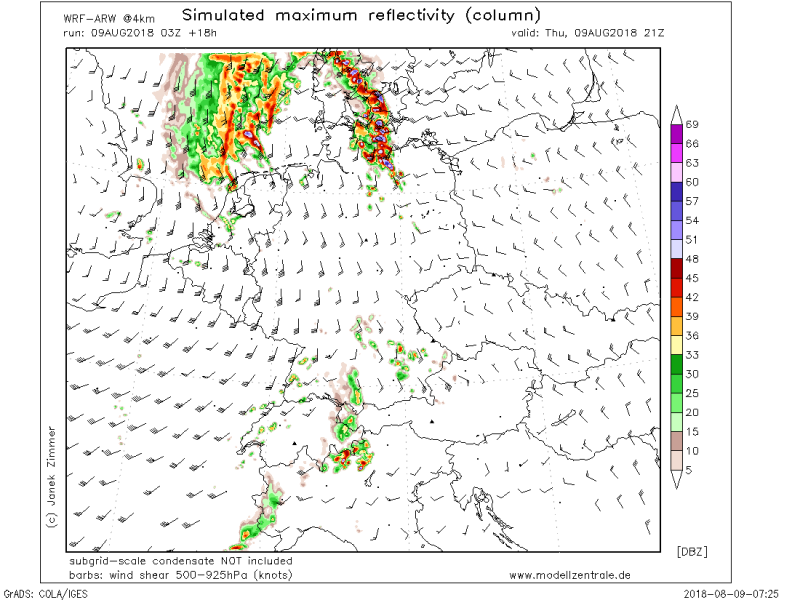 A gradual weakening of the storms (clusters) is expected overnight as instability dissipates further NE.

Rainfall sums across Germany and Benelux today, as seen by the ARW model. 40-80 mm of rainfall possible in some regions, locally even more where the most intense storms will occur. Flash floods are indeed quite possible there. 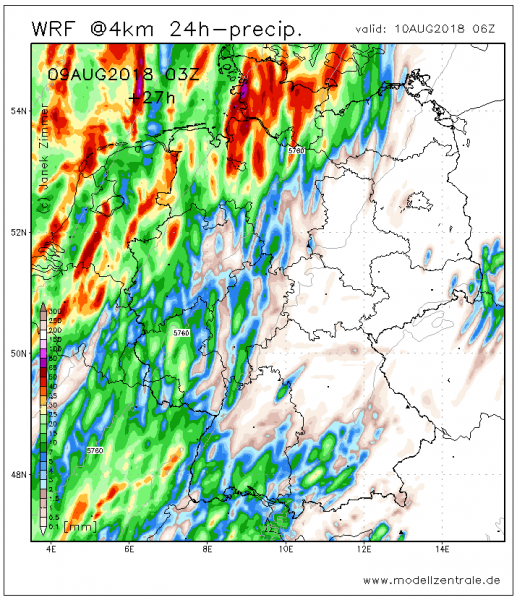 Rainfall accumulations are even more concerning across SE France where the overlap of high instability, strong shear (which is mostly parallel to the frontal boundary) favours a robust environment for training storms, conductive for persistent intense rainfall through the afternoon and evening hours. This will likely lead into an excessive amounts of rain locally across the W Alps and significantly enhance flash flood threat. 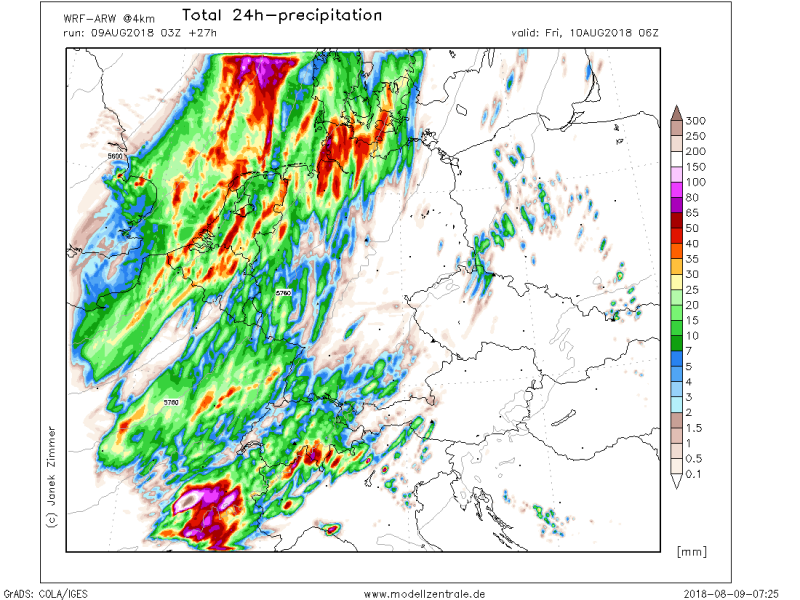 Much needed refreshment arrives behind the cold front, so much cooler airmass will be spreading across western Europe in the evening and overnight hours. Much colder airmass will also be advecting into S France and N Iberian peninsula. 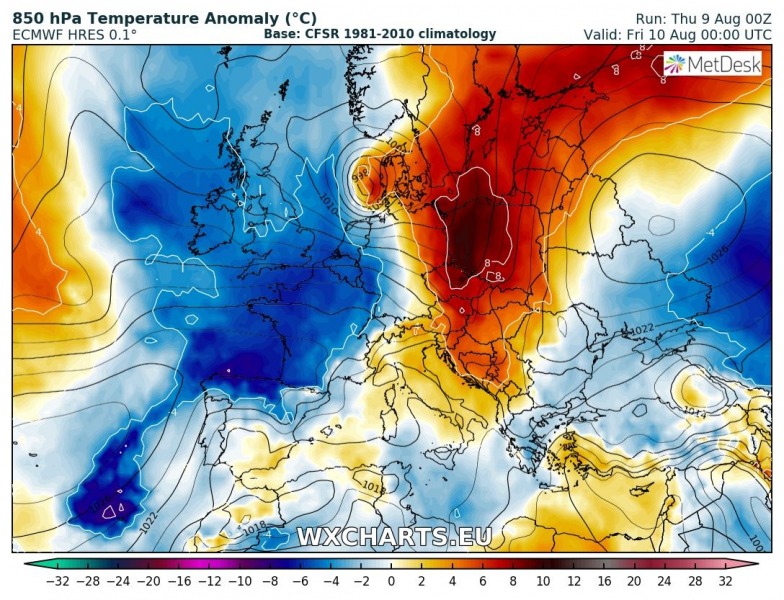 Another area of severe storms development today is over Finland,where severe storms with damaging winds and tornadoes are possible this afternoon.