A relatively short but intense snow blizzard event is expected across the western half of Iceland tomorrow morning, Saturday, Jan 4th. The event is related to the rapidly intensifying cyclone to the northwest of Iceland, creating dangerous heavy snowfall and severe winds with blizzard conditions across the Southern Peninsula, the capital Reykjavik, Snæfellsnes and Westfjords. Heavy snowfall changes to rainfall during the day due to strong warm advection from west to east, but remains over the Highlands.

The pattern responsive for this severe event is a new trough developing from the Labrador Sea towards southern Greenland, developing an intense cyclone towards Iceland. Conditions will worsen significantly with the rapid intensification of the cyclone. A strong ridge expands to the south across the rest of North Atlantic and west-southwest Europe. 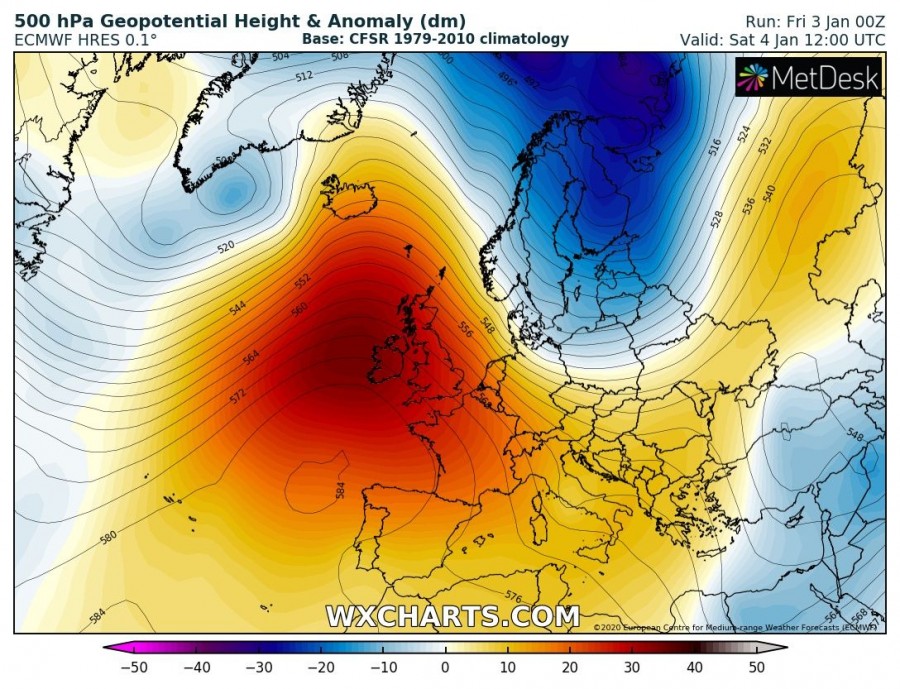 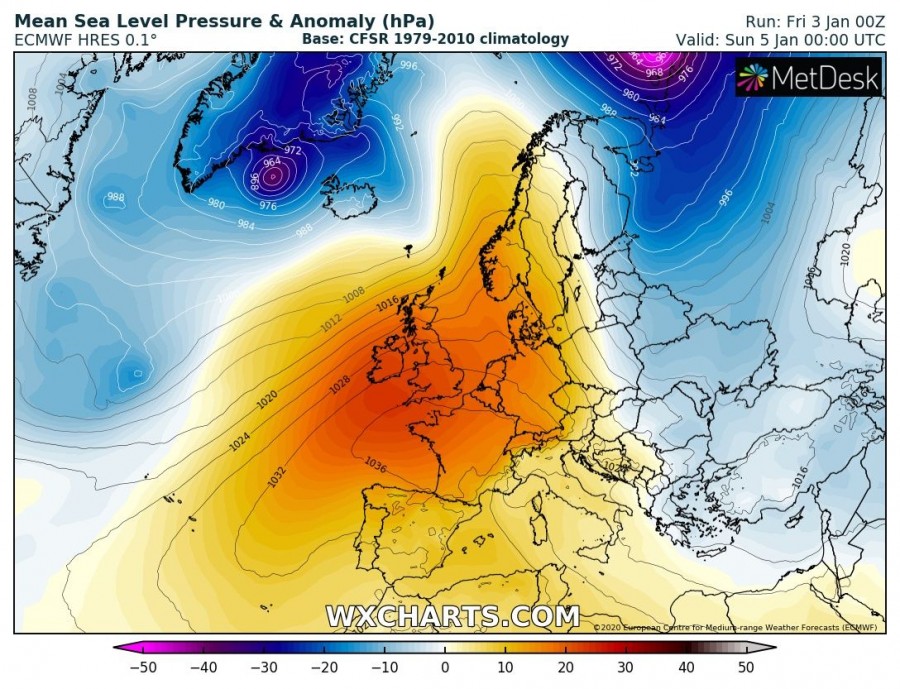 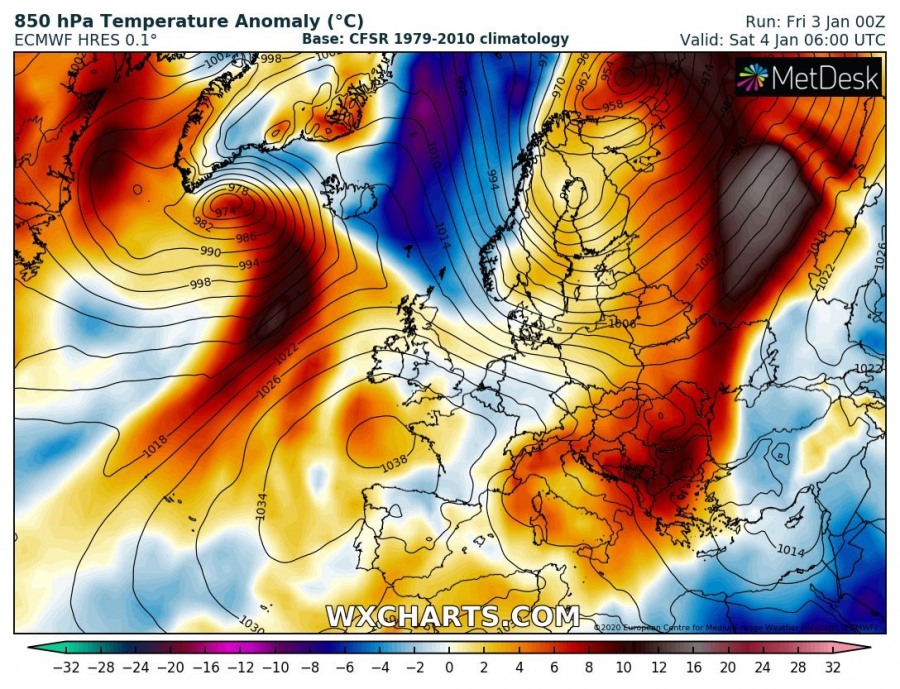 Here is a 6-hour sequence of the deep cyclone developing tonight along the southern tip of Greenland and rapidly intensifying while moving towards Iceland on Saturday morning. The central pressure drops for around 25 mbar during the first 12 hours od rapid deepening – from around 980 mbar as of 00 UTC, Jan 4th to around 955 mbar as of 12 UTC, Jan 4th. Then, pressure remains similar or slightly dropping until Sunday while cyclone travels between Iceland and Greenland. During the morning hours, a very sharp frontal boundary delivers intense snowfall with blizzard conditions across the west-southwest Iceland (with southeasterly winds ahead of the surface front), then sharply changes to rainfall and westerly winds after its passage. Very intense snowfall and blizzard will remain over the northwest Iceland, bending northwestwards towards the low center and extreme south Greenland. 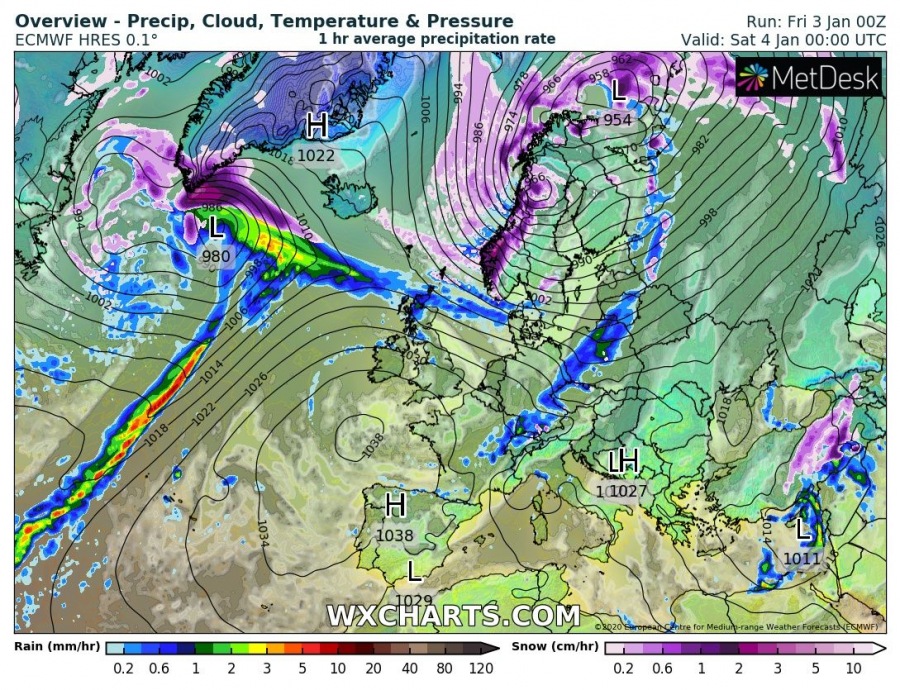 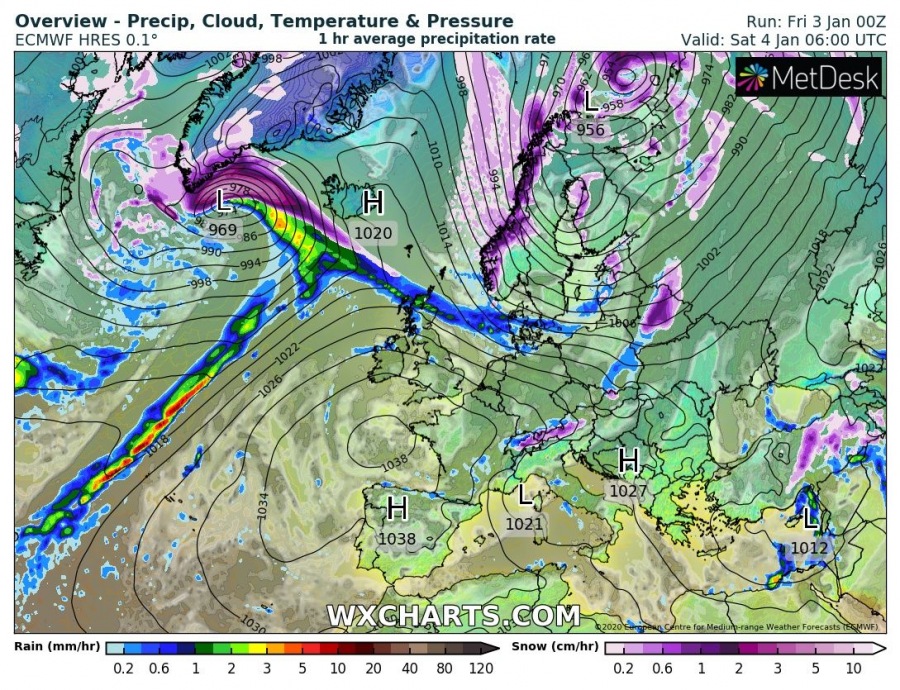 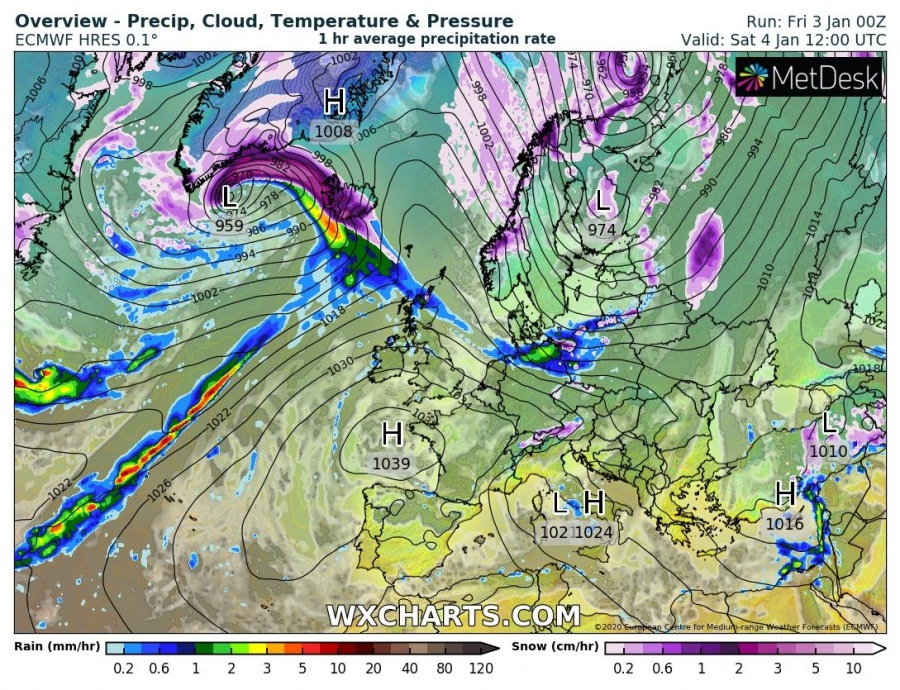 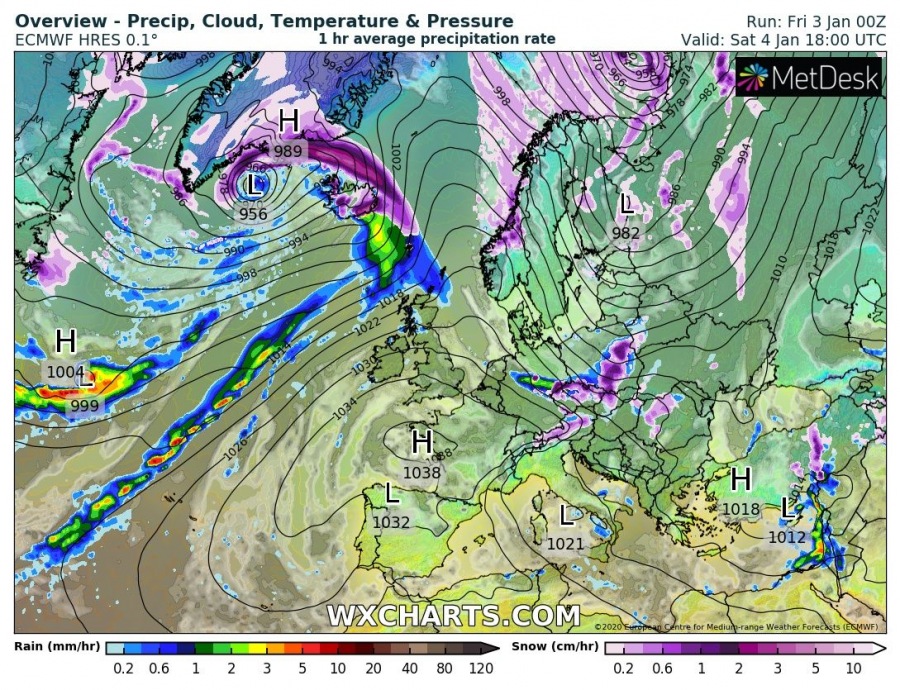 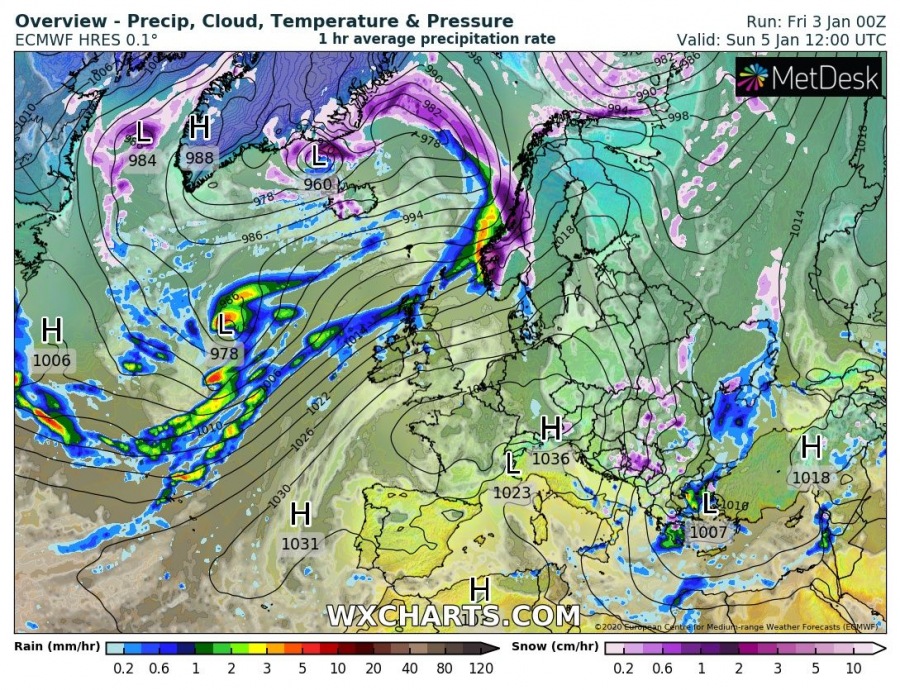 There will be a short window of very intense snowfall and blizzard conditions in the morning hours, before it all changes to rain with the arrival of much warmer air mass later in the day. Severe to locally extremely severe winds (above 120-140 km/h) are expected, creating whiteout conditions. It will be very dangerous also across the capital Reykjavik, the peak of the event moves through during the mid-morning hours. 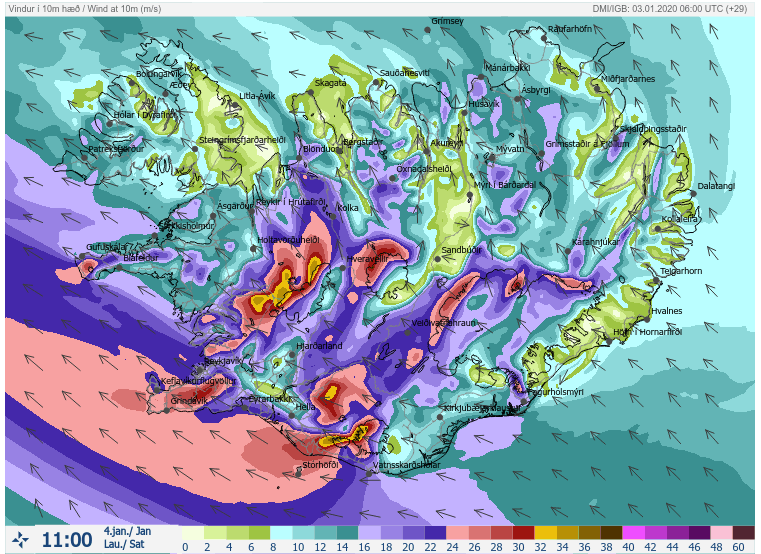 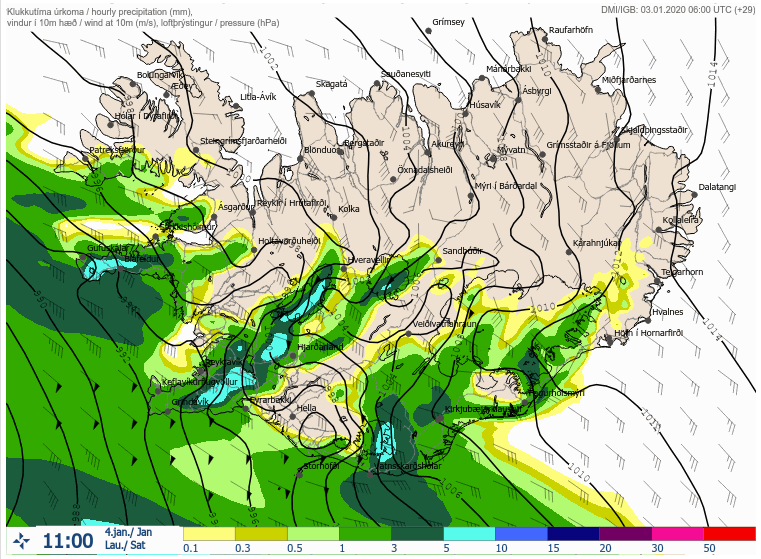 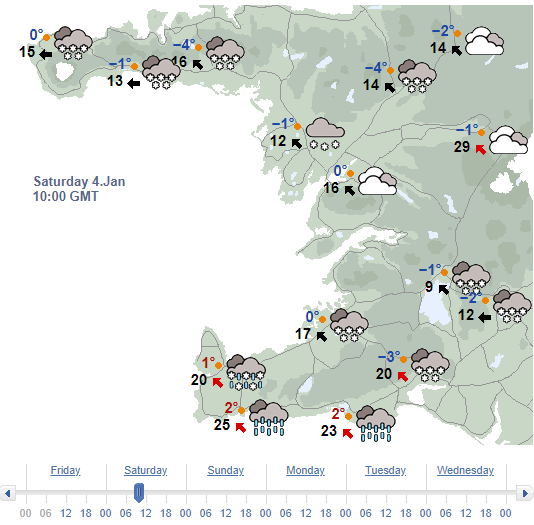 An orange (level 2 of 3) warning has been issued for a large part of Iceland through Saturday daytime, regarding the severe to extremely severe winds and locally a temporal (several hours) blizzard conditions. Intense blizzard will remain over the Highlands through the whole event. 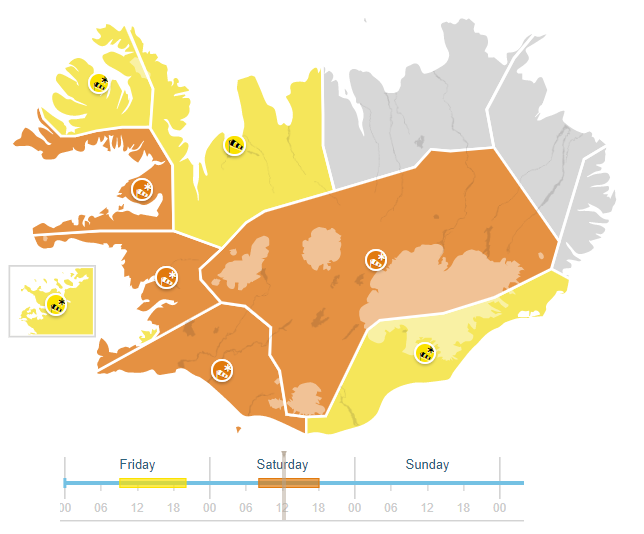 Peak gusts are expected to be severe, likely exceeding 100-120 km/h and much higher along the fjords across the western half of Iceland, violent in the mountains (180+ km/h possible): 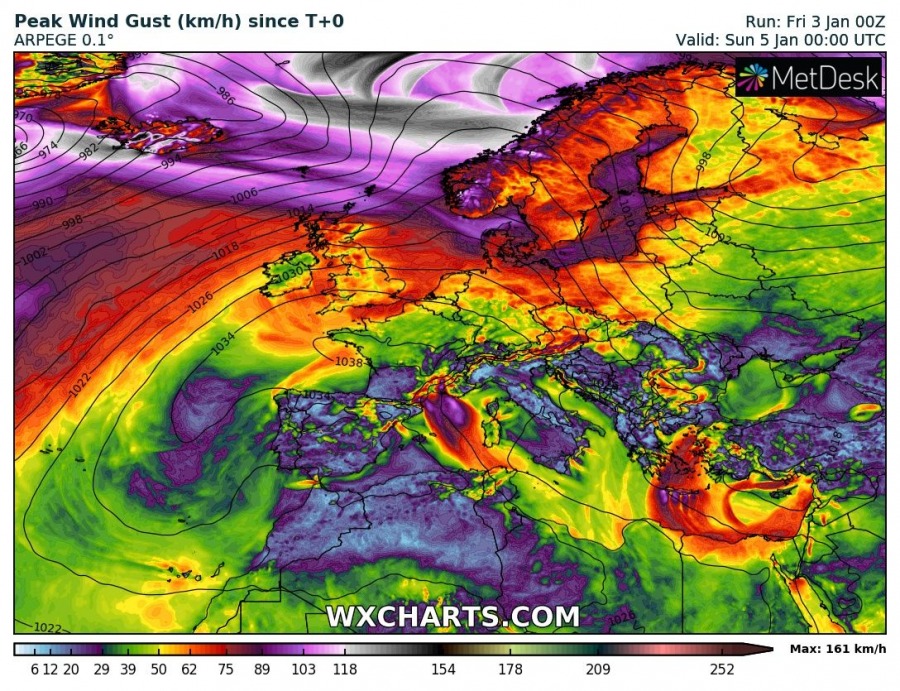 Stay alert for dangerous weather conditions and stay tuned for updates and live coverage with our reporter from Reykjavik tomorrow!