Contrary to the much above normal activity of North Atlantic troughs and extremely deep surface cyclones over the past few months, the NAO index flips into strongly negative these days. This means the mean sea-level pressure is higher over the North Atlantic than it is further south, usually over the Azores. This weekend, a very strong upper-level ridge dominates the whole North Atlantic and western Europe – it’s associated surface high-pressure system significantly strengthens and pushes the sea-level pressure to almost 1055 mbar in its center. That’s extremely high for the region.

On Friday evening, the surface pressure is already touching the 1050 mbar mark, centered just south of Iceland. The oceanic buoy #4401565 is reporting 1050.1 mbar. 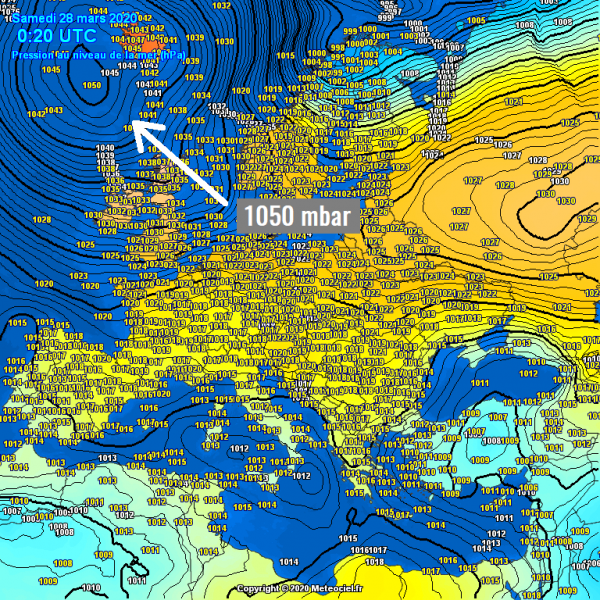 The general pattern over the Northern Hemisphere indicates this very strong upper-level ridge taking place over the North Atlantic this weekend, the anomaly of the geopotential heights in its center is strongly positive! 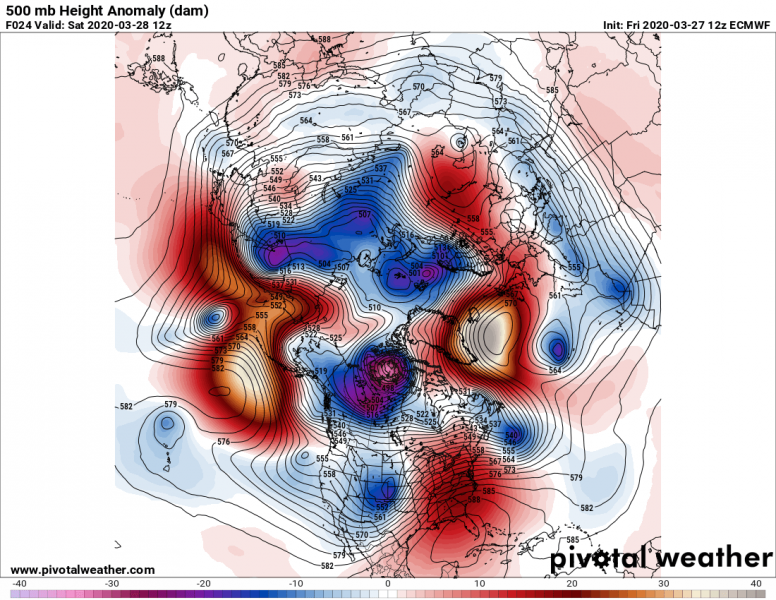 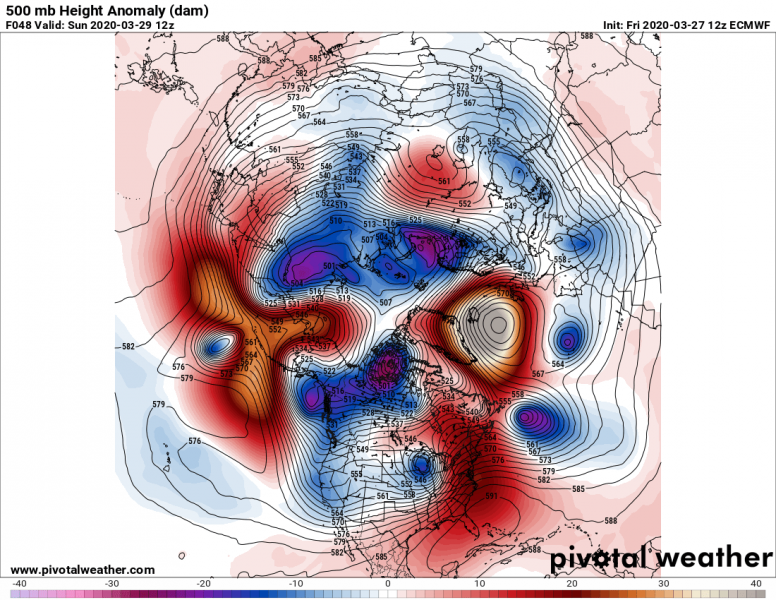 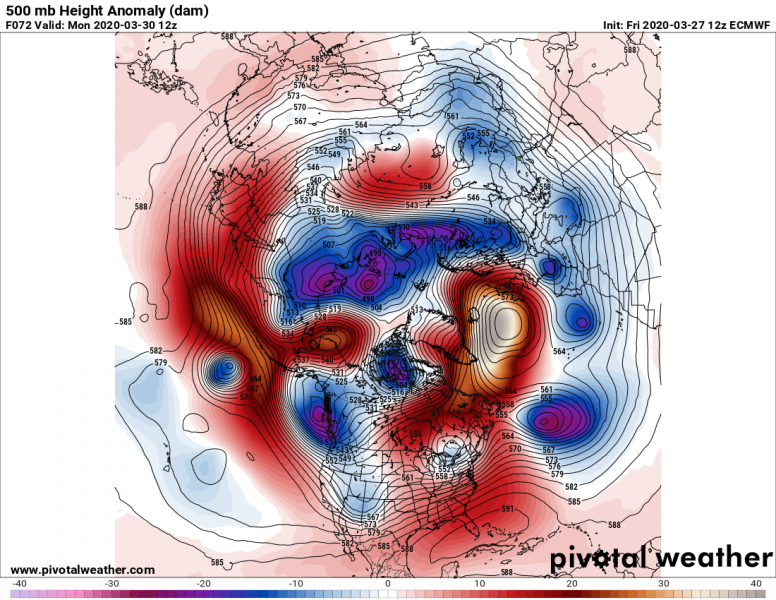 With the further strengthening of the upper ridge over the weekend, the surface pressure will be rising. While models were actually slightly underestimating the pressure tonight (see the observed 1050 mbar at midnight, March 28th), model guidance suggests it will likely push up to around 1052-53 mbar by Saturday afternoon. Even higher – up to near 1055 mbar – by Sunday late morning and afternoon, then starting to fall down again gradually on Monday but should remain very high until Tuesday when the ridge collapses. Models are hinting the highest pressure readings across southern Iceland, western Scotland and Northern Ireland might exceed 1050 mbar threshold as well, while the highest pressure will remain further west. Attached is the sequence of the rising pressure over the North Atlantic and western Europe through the weekend into early next week. 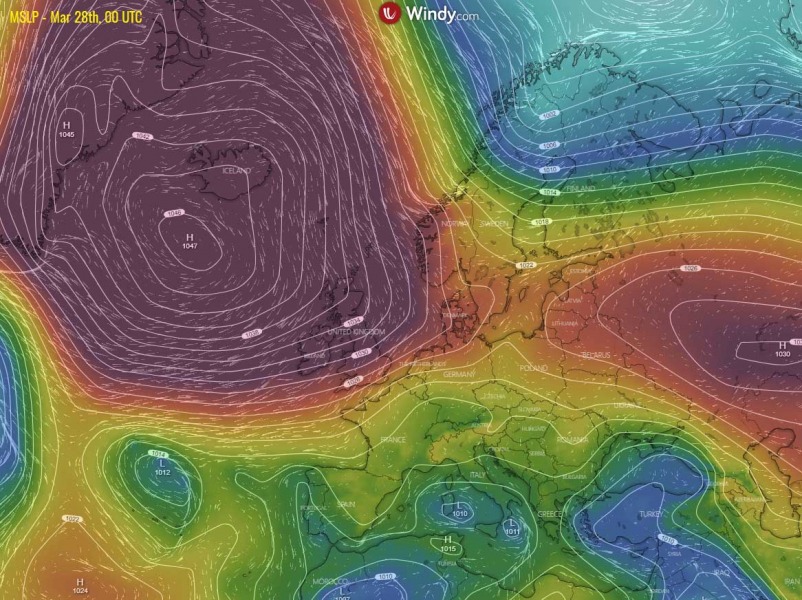 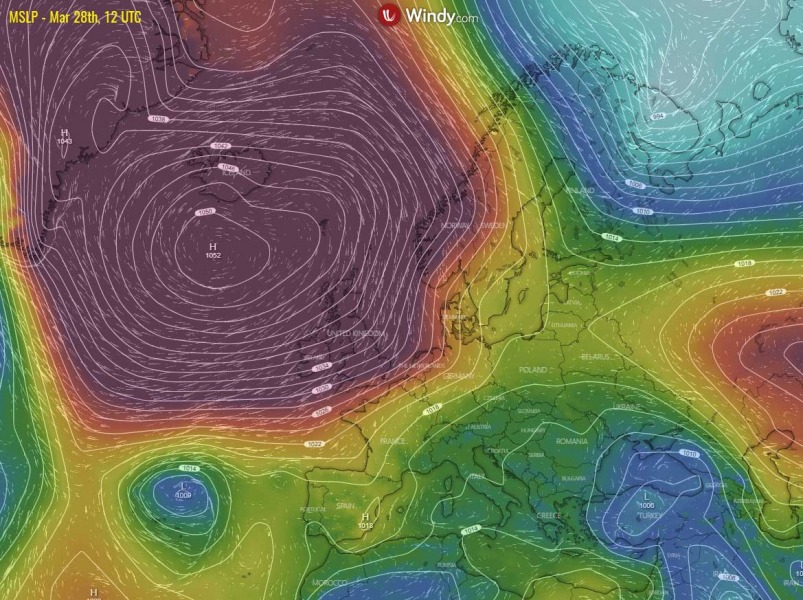 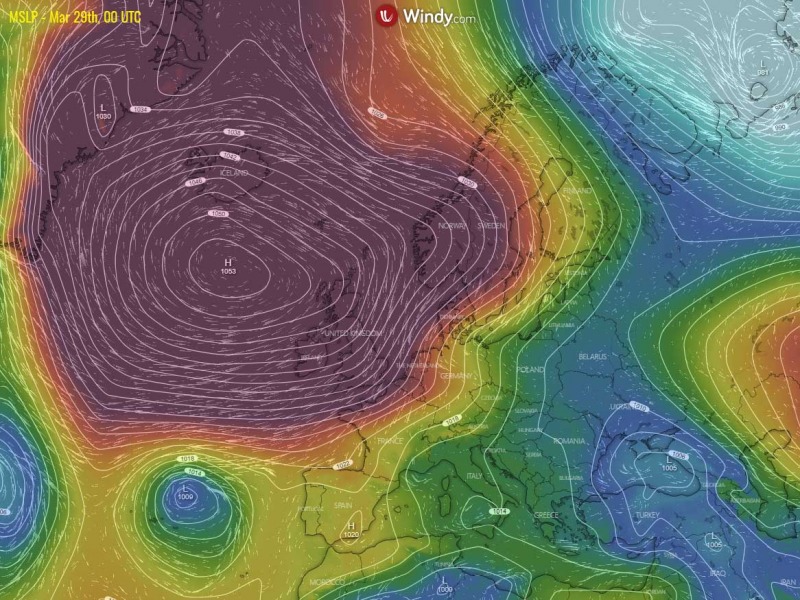 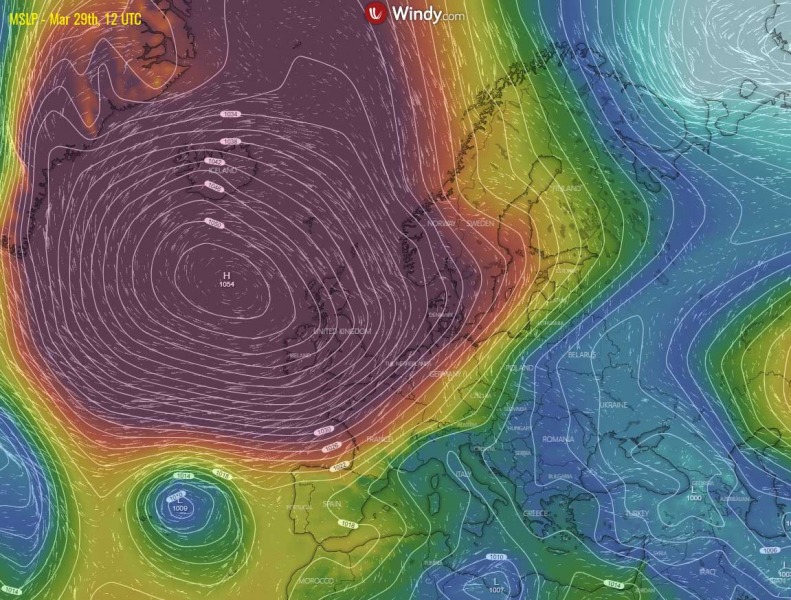 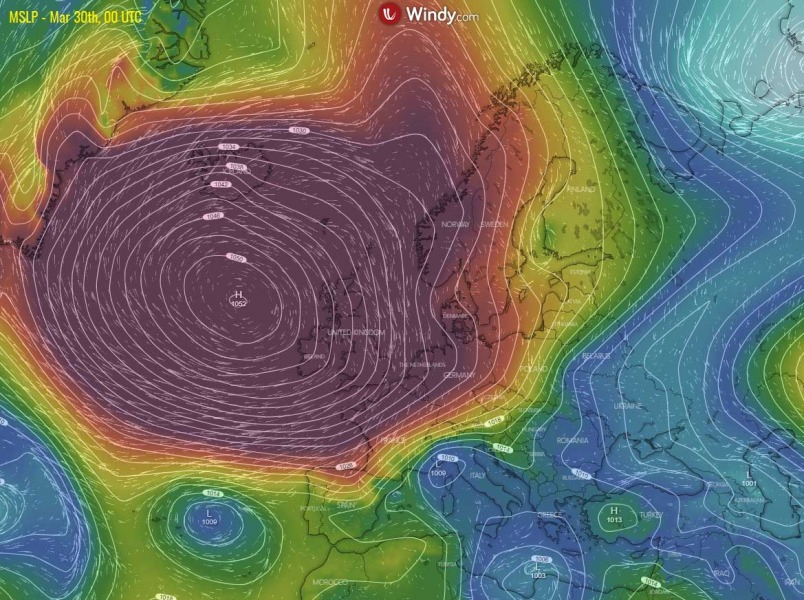 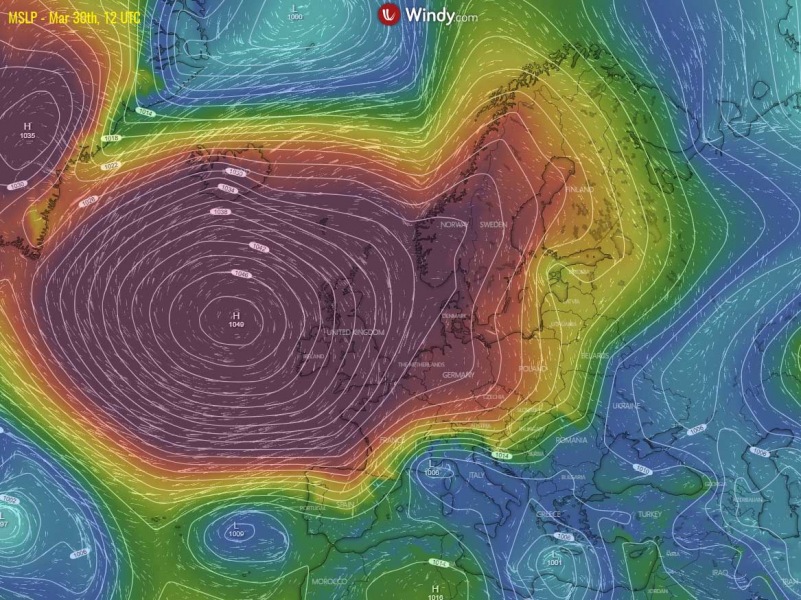 For the comparison, here are a couple of official data of the highest mean sea-level pressure records observed over the North Atlantic and western/northern Europe until now:

We can notice there have been some new pressure records set in late January, during a very powerful high-pressure system sitting over western Europe. See the analysis below:

Aside note: The highest ever observed surface pressure record in Europe is 1067.1 mbar, recorded on the 22nd and 23rd of January 1907 in Pärnu, Estonia and Riga, Latvia.

Globally, the highest (adjusted to) sea-level pressure ever recorded was 1083.8 mbar at Agata in Evenk Autonomous Okrug, Russia on Dec 31st, 1968.

The result of such a strong blocking ridge will be a strong northerly (meridional) flow on its eastern side, delivering a strong Arctic outbreak across the European continent. The average temperature through the period from the end of March into early April will be significantly colder than the long-term average across a very large part of Europe. Attached are 850 mbar and 2 m temperature 5-day anomalies: 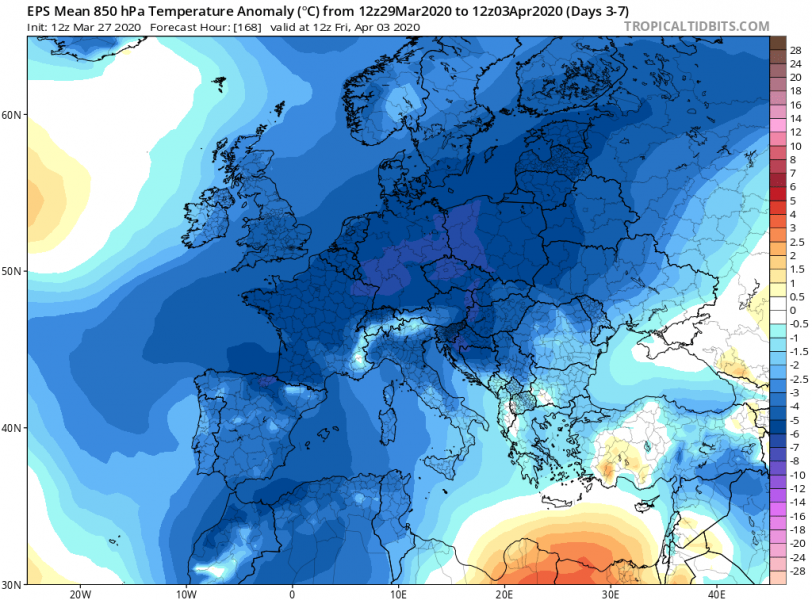 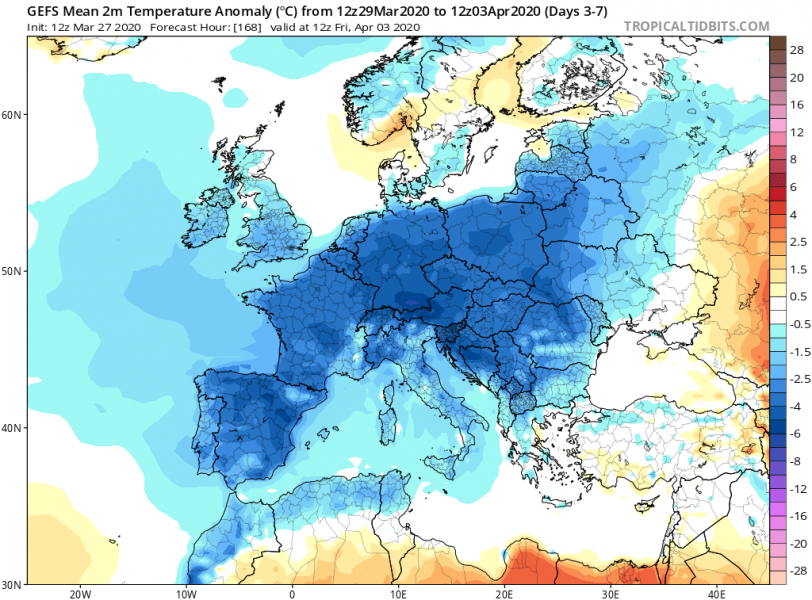