While the main feature of interest is the weekend’s large North Atlantic cyclone, the dynamic pattern in front of this activity should bring colder weather into Ireland, UK, Benelux, France and Spain afternoon tomorrow. A much colder air mass than normally will likely spread across southwestern Europe, the western Mediterranean and northwest Africa over the weekend. The colder pattern should deliver some fresh snow into higher terrain on northern Spain and Pyrenees.

The developing pattern reveals persisting ridging over the Azores with waves crossing the North Atlantic through the rest of this week. One wave deepens over western Europe and digs deep far south into central Europe and the Mediterranean on Thursday. Against the ridge to its west, a more northwesterly flow establishes and results in strong cold advection across Ireland and UK first (Thursday), then gradually spreading into Benelux, France and Spain the next day (Friday). The coldest air mass develops on Saturday while maintaining over the Iberian peninsula, the western Mediterranean and northwestern Africa (Algeria), also extending into Sunday. 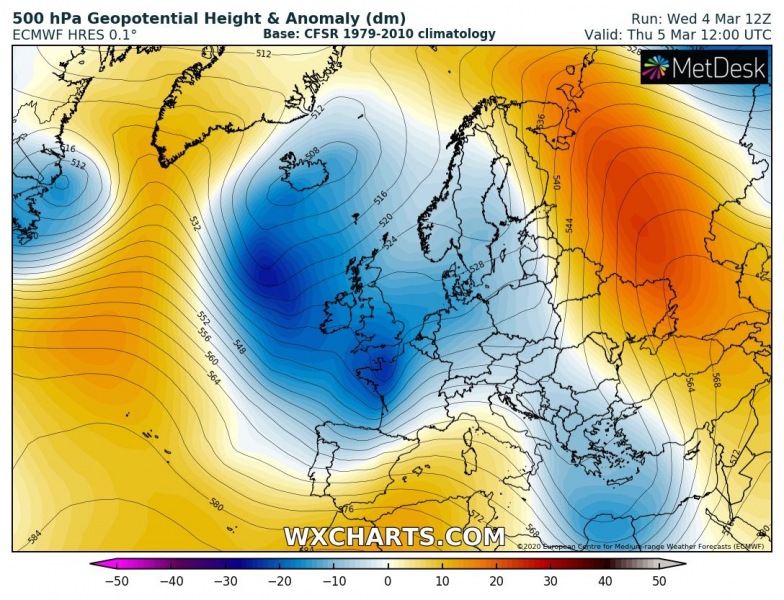 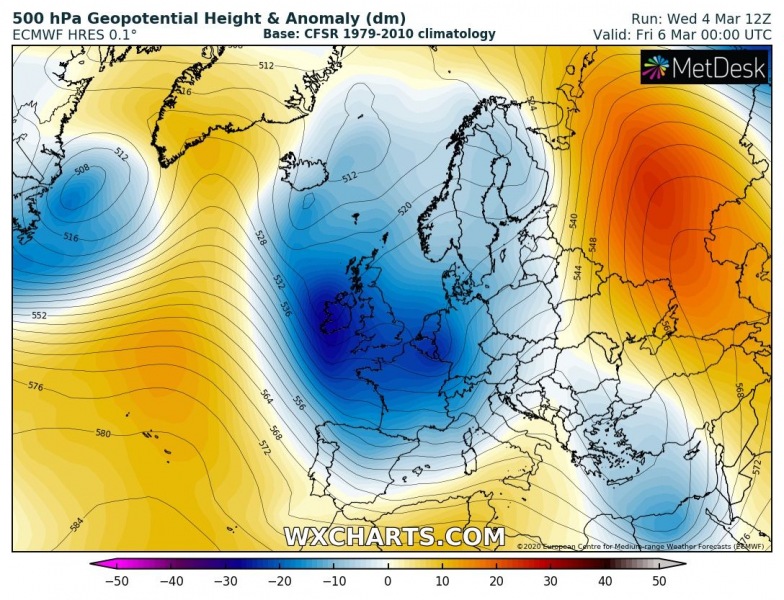 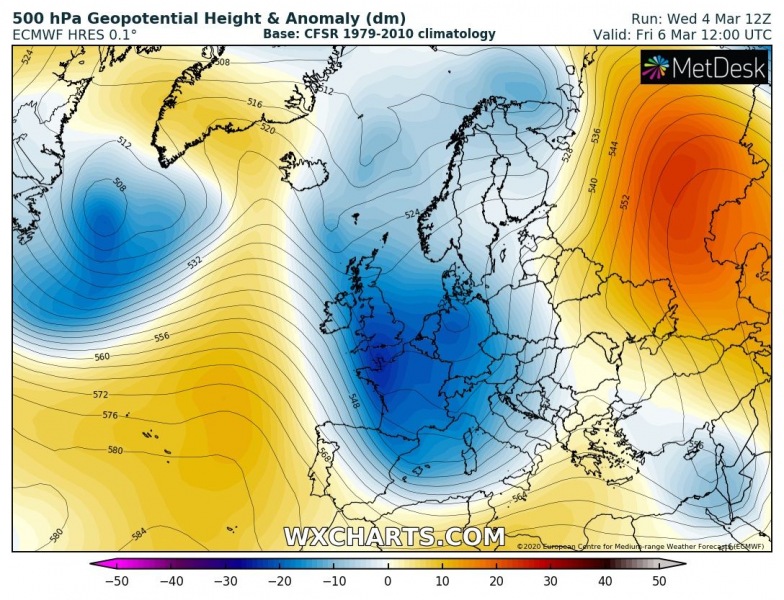 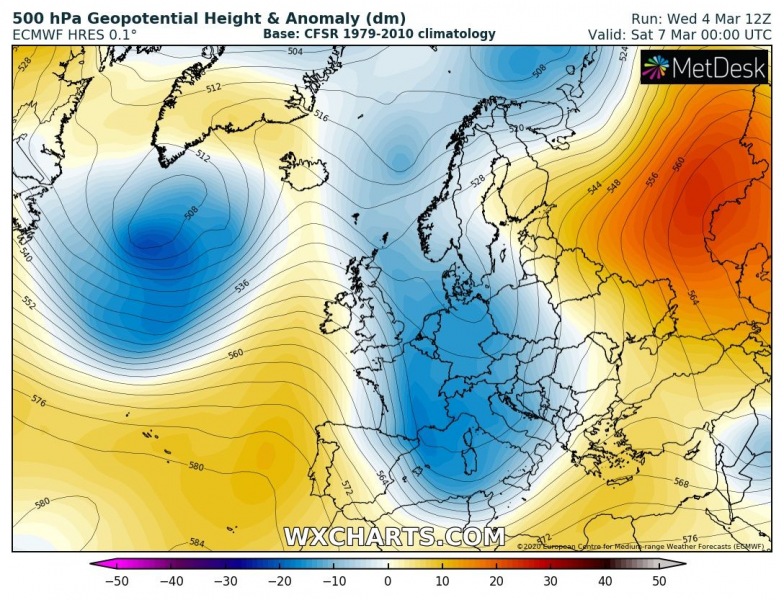 The cold advection in nicely visible on the 850 mbar temperature anomaly: 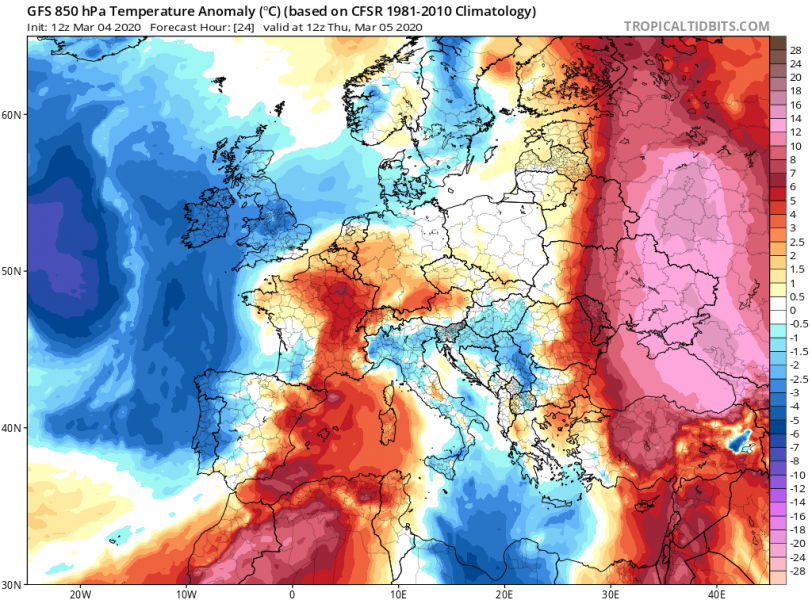 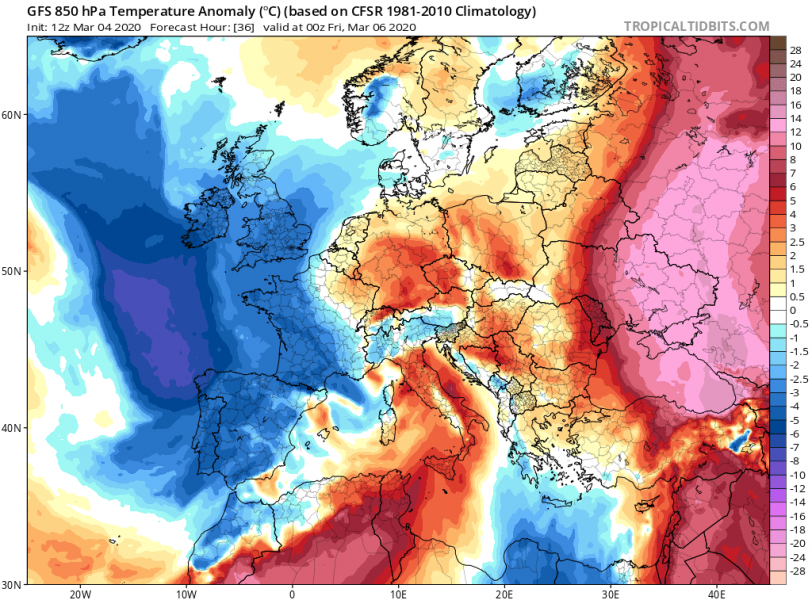 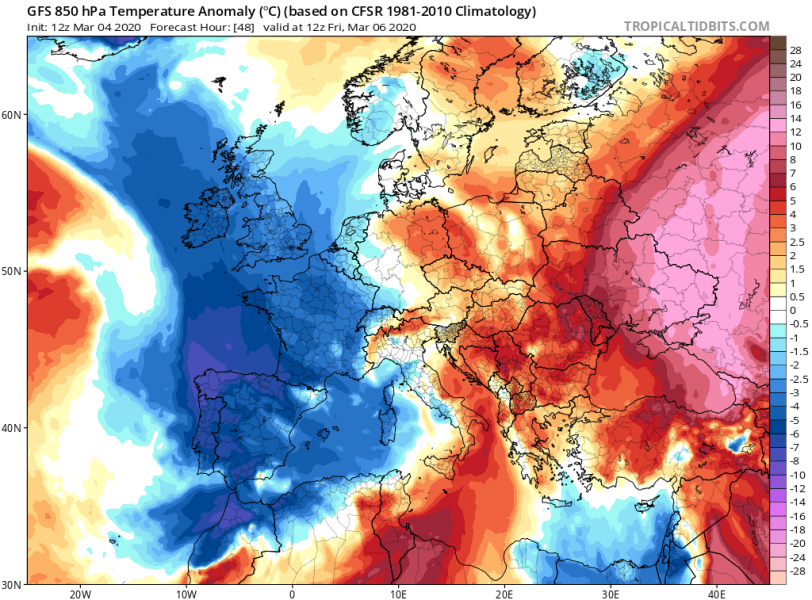 We can see that the low-level air mass is also responding to the cold advection aloft, first introducing colder weather across Ireland and UK through the afternoon tomorrow (Thursday), then quite rapidly spreading into Benelux, France and Iberian peninsula on Friday. It should be a frosty Friday morning across much of the UK. The cold maintains across west-southwest Europe also on Saturday. But warming is expected towards Sunday when large North Atlantic cyclone slides in with potentially severe winds and high swell from the west. 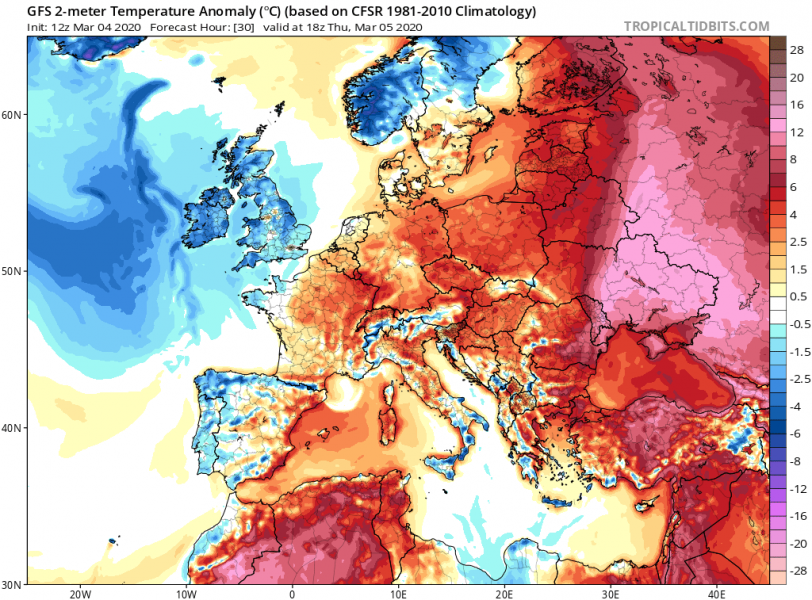 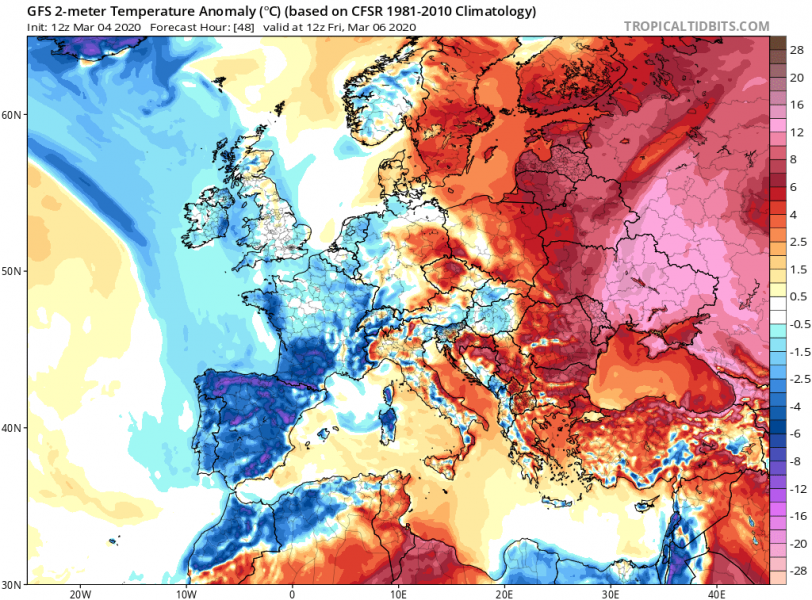 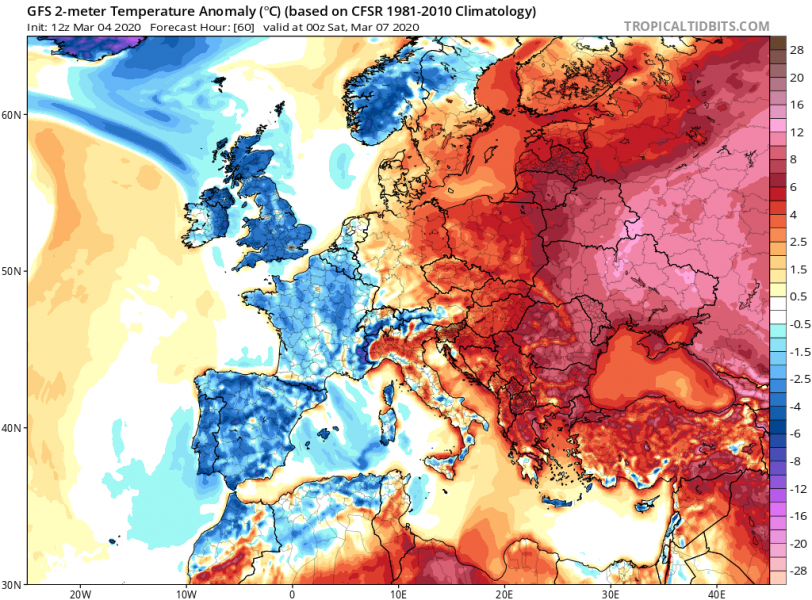 Being placed between the strong Azores high-pressure system and deepening trough across west-central Europe, strong northwesterly mid/upper-level flow establishes across the Bay of Biscay. In the lowest levels, a relatively strong pressure gradient pushes severe winds partly towards western Ireland and across the Bay of Biscay into western France and northern Spain. Wind gusts should reach 90-110 km/h across a broad area, even higher than 120-130 km/h locally (e.g. northern Spain). 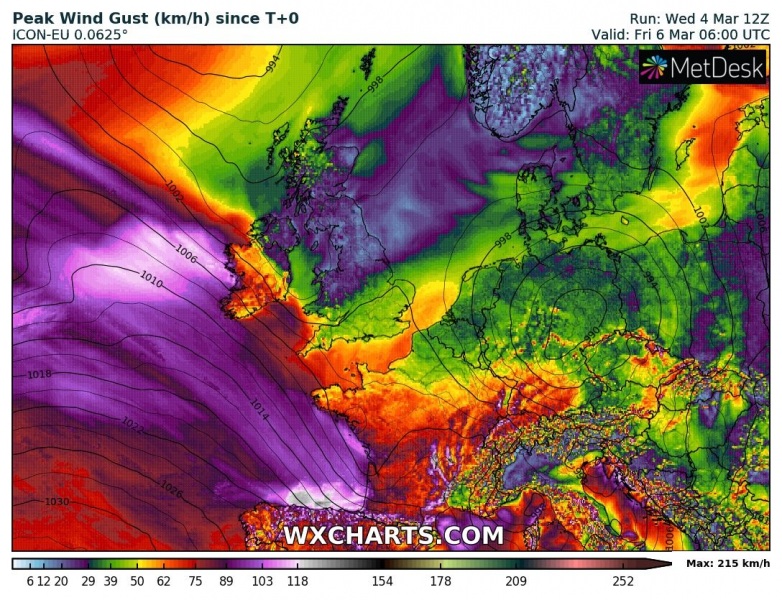 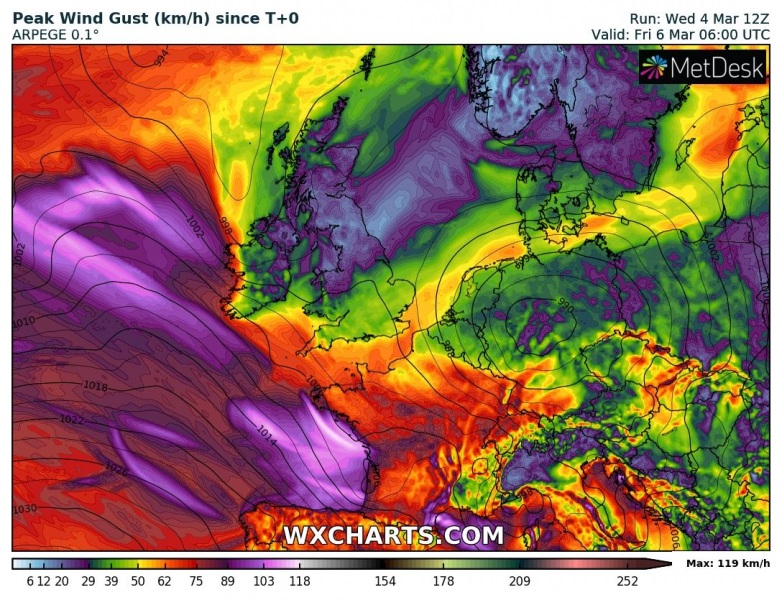 See also a discussion regarding the weekend’s depression with high swell potential: