A strong cold advection is spreading across Europe this evening, associated with the cold outbreak. The event is intensifying tonight into early this coming week. Long-range model guidance is hinting this might be one of the final cold blasts of such intensity for some time. Hopefully, as this outbreak will again produce damaging frost and extremely cold mornings for early April in some parts of Europe!

The current surface analysis over Europe reveals a powerful high-pressure system across the North Atlantic and western Europe, resulting in the Arctic outbreak across northern Europe with strong cold advection further south into central and western Europe. The surface cold front is extending from western Russia towards the Alps into southern France this evening, quite rapidly moving south. Attached are pressure analysis, windchill temperature map and peak wind gusts today – we can see the strongest winds are across western Europe where the strongest pressure gradient is present: 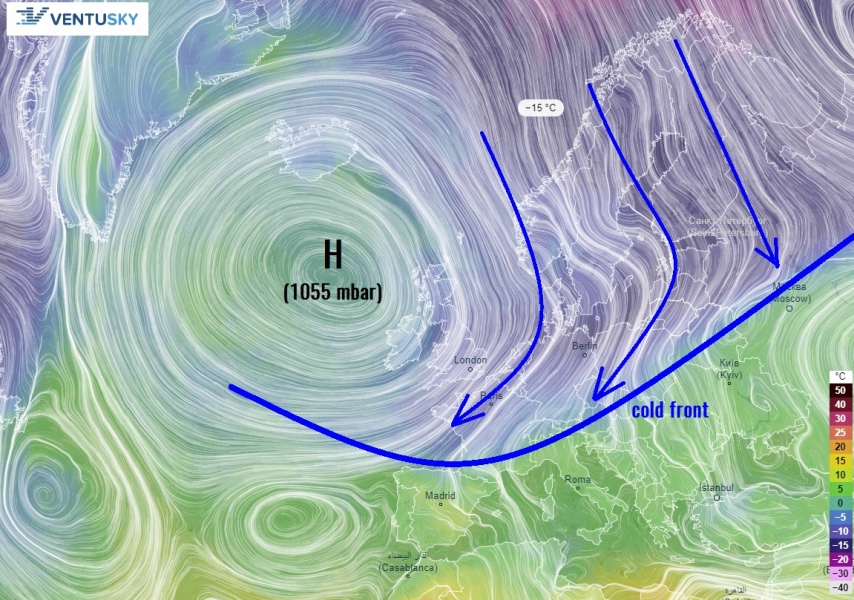 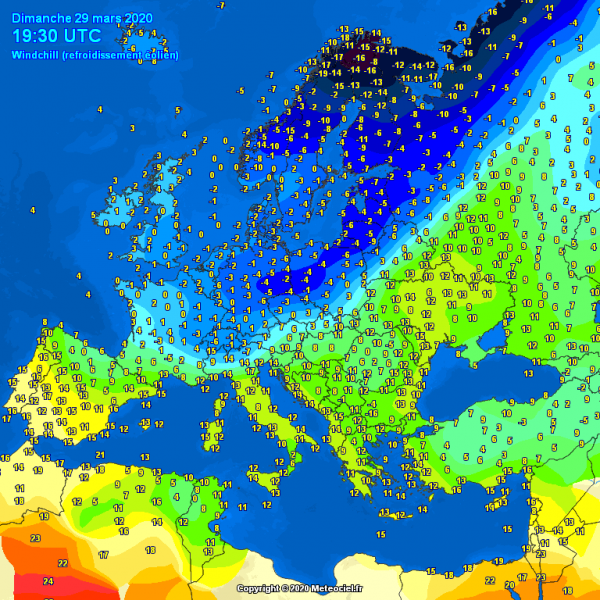 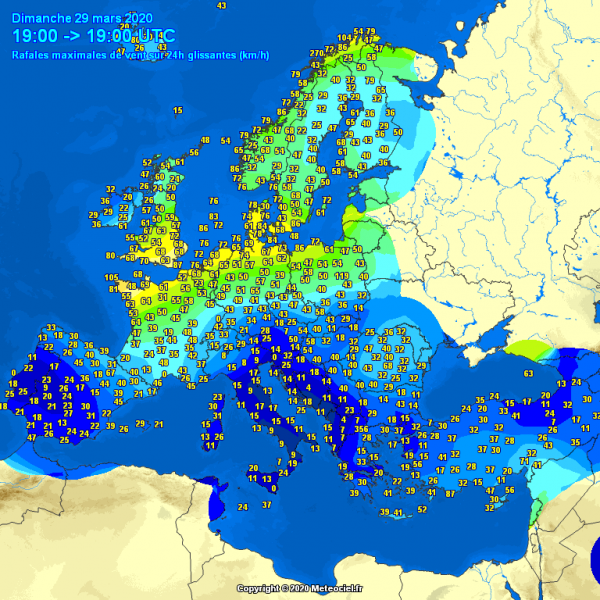 The surface high-pressure system has peaked this afternoon, reaching 1054-1055 mbar in its center over the North Atlantic. Peak pressure readings across western Scotland and Northern Ireland were around 1051 mbar as well. 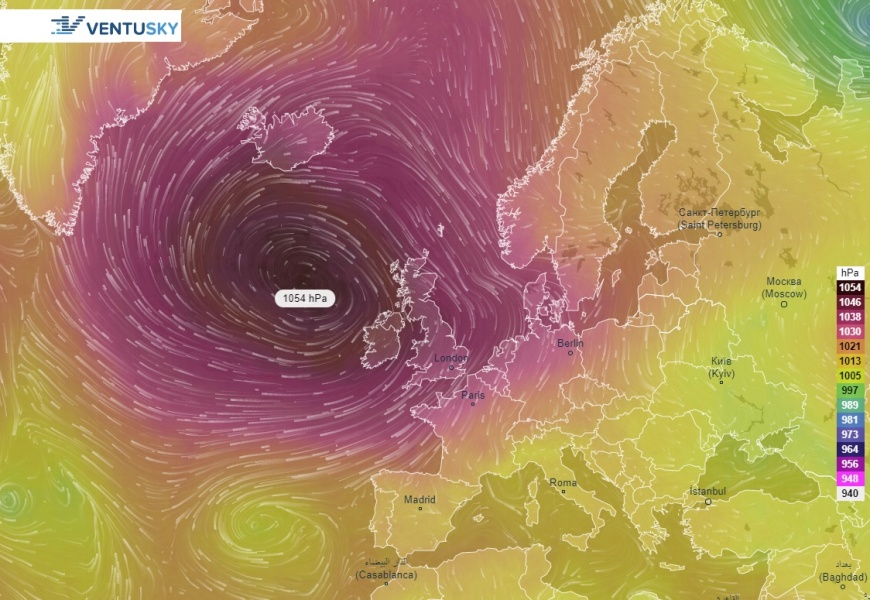 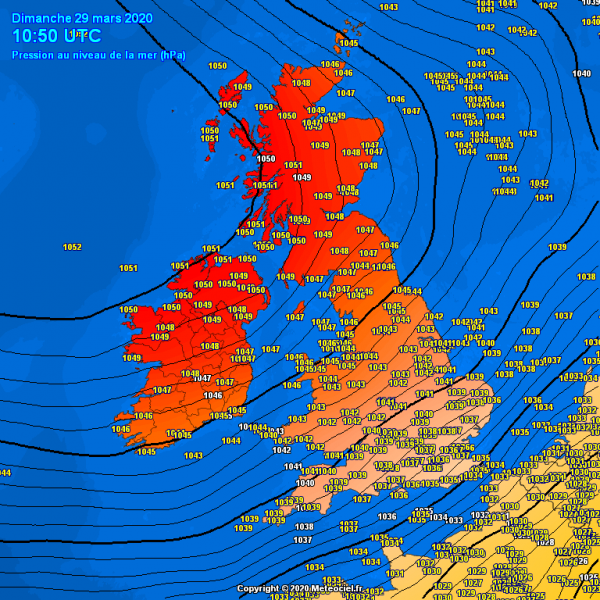 The upper ridge and the high-pressure system are now gradually losing its strength and are expected to weaken through the remainder of March. The eastern part of the ridge will also push surface pressure higher across central Europe, allowing stronger colder advection into the eastern half of Europe over the next 48 hours. 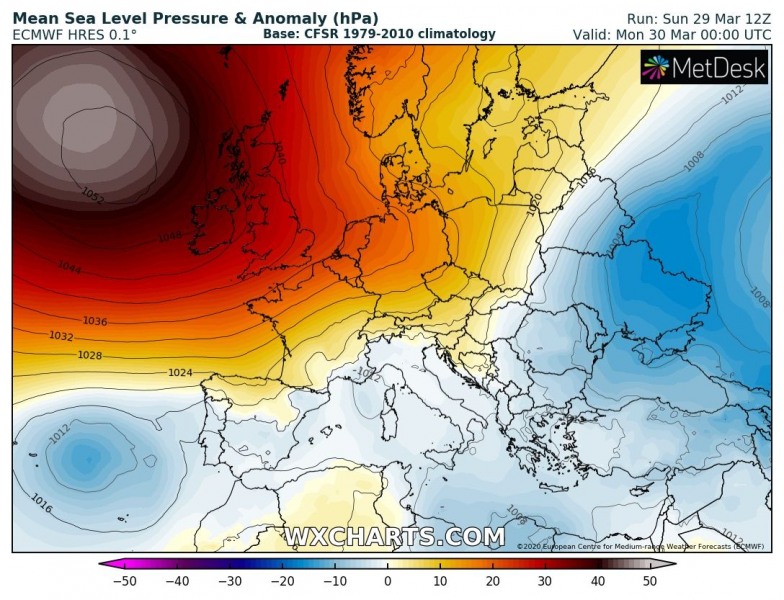 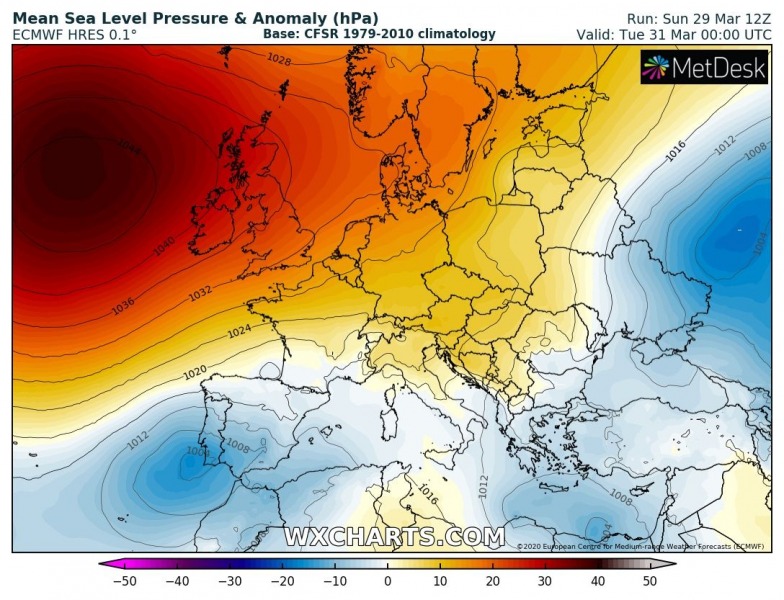 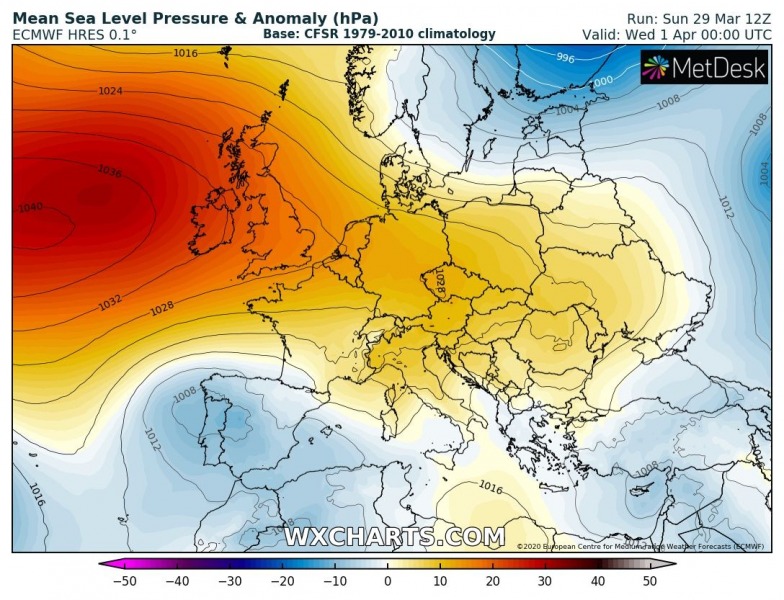 This is the progression of the cold outbreak across Europe until April 1st. A much colder airmass continues across west-central Europe tonight, reaching Iberia and northern Mediterranean tomorrow morning. The cold blast intensifies on Monday through Tuesday/Wednesday across east-central Europe and the Balkans, vanish over the Iberian peninsula but remains strong there as well. 850 mbar level (approx. 1500m ASL) temperatures over the eastern Europe and the Balkans will be more than 10 °C colder than normal for the end of March! Through early April, pattern flip over the North Atlantic results in decaying cold outbreak across whole Europe, the cold pool remains over the Balkan peninsula until Friday. 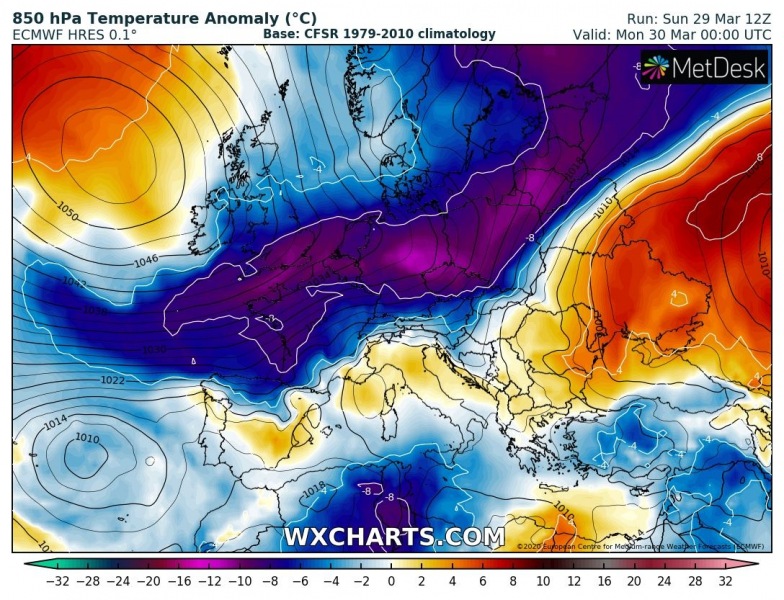 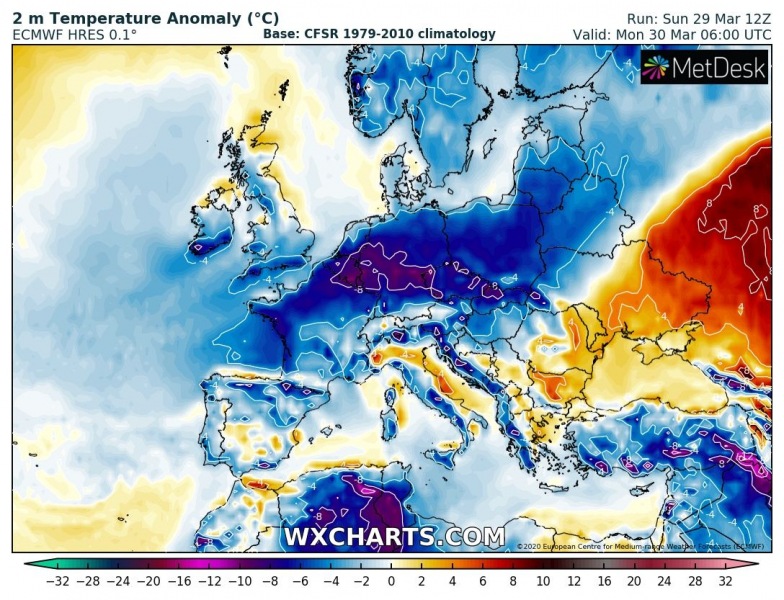 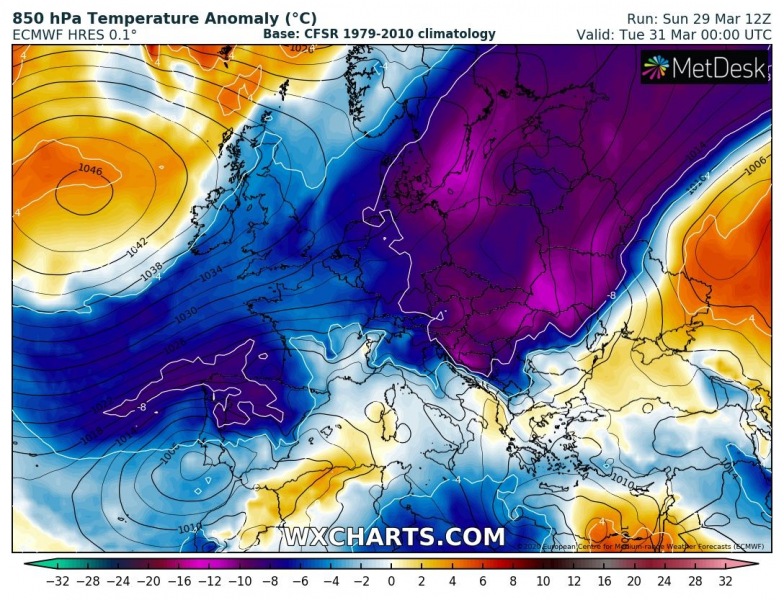 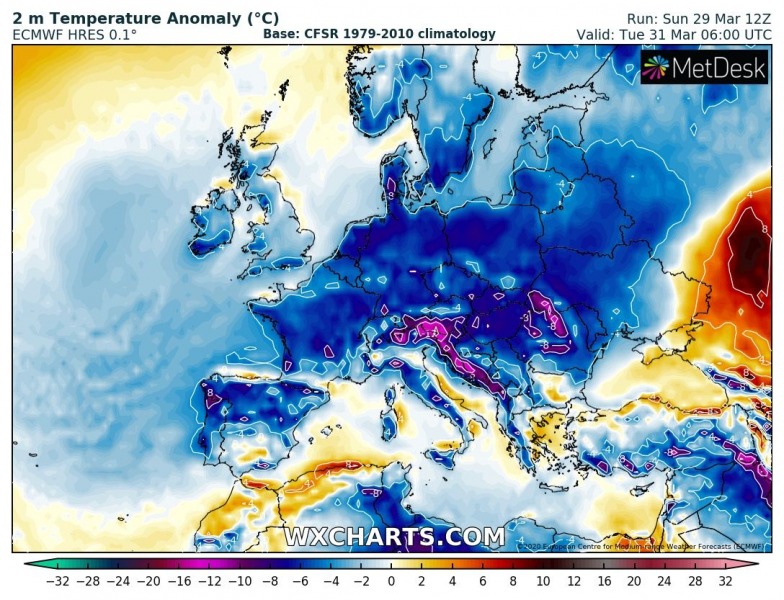 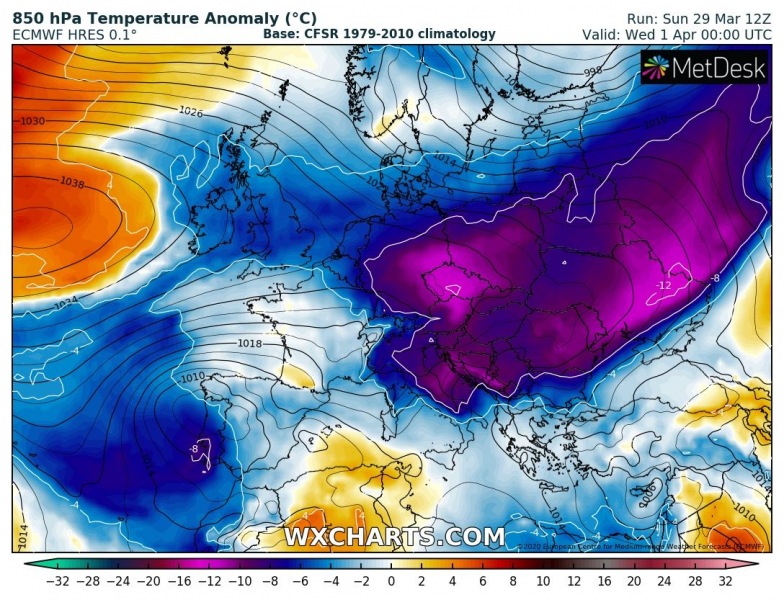 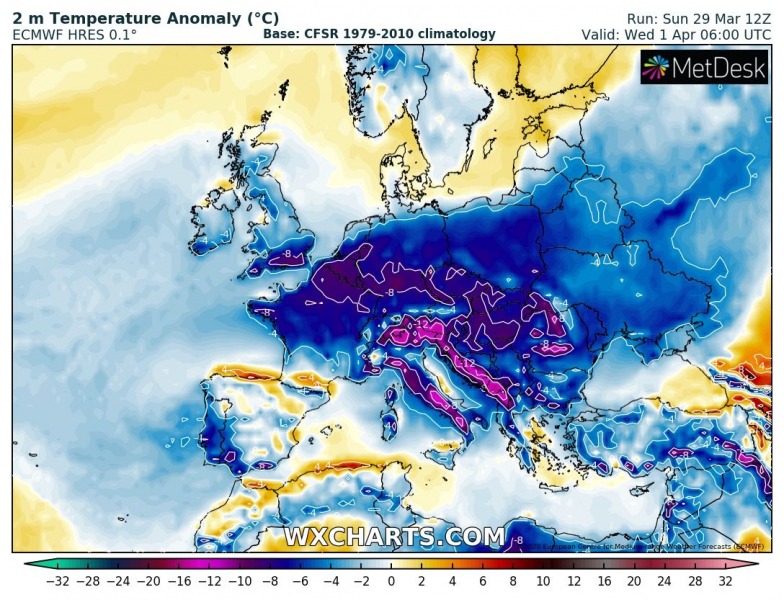 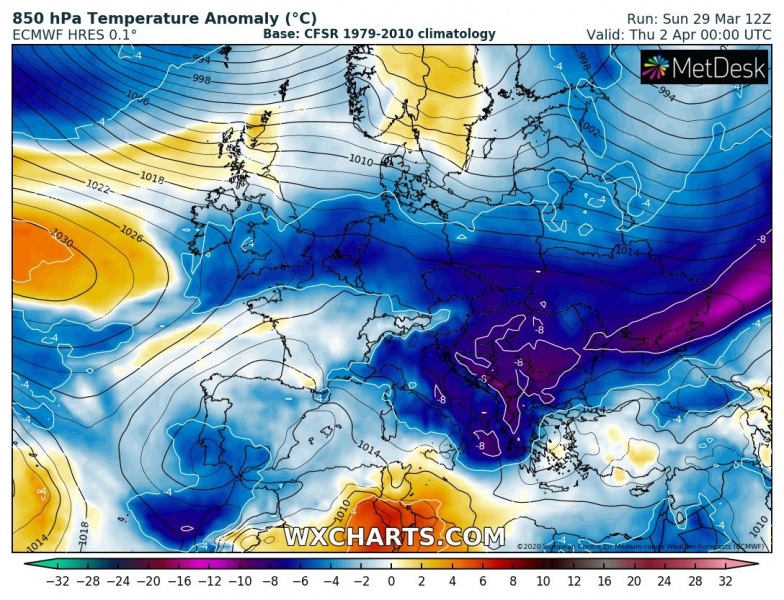 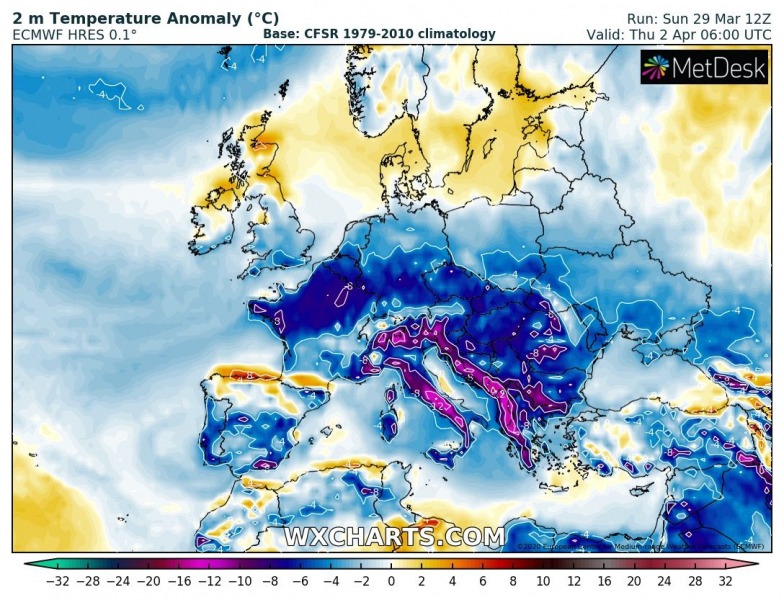 The northerly moist advection will deliver quite some fresh snow into the Alps, while a secondary surface low forming over the central Mediterranean on Wednesday, should bring a strong snowstorm over the southern Balkans – locally more than 50 cm of fresh snow is again quite possible there through early April! (Stay tuned for more details on snow forecast on Monday). 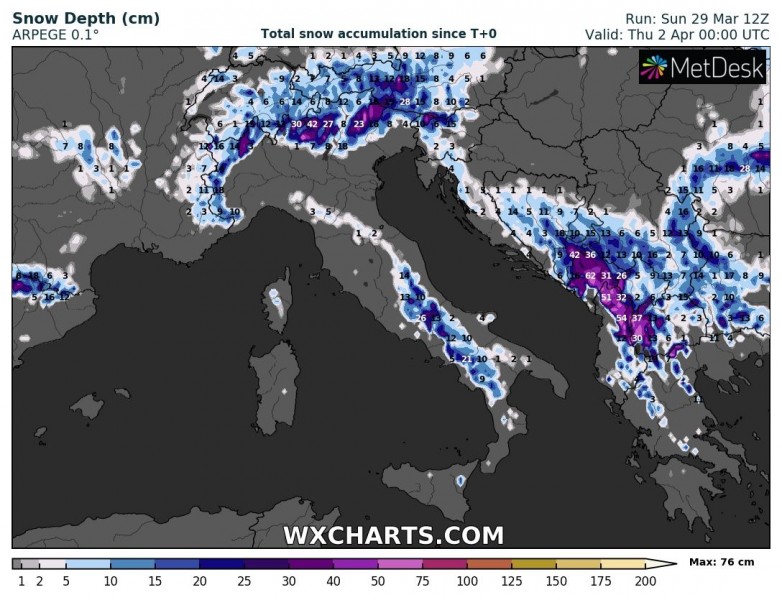 The cold outbreak will also flush away the high PM10 air pollution which was spread across a large part of our continent this weekend: