We are just seeing a pretty strong outbreak of cold air mass into east-central Europe this week, there is more coming soon! It appears likely another *very* powerful ridge/high-pressure system will form over North Atlantic and introduce a significant cold outbreak into western and potentially also southwestern Europe through the final days of March. Even snowfall will be possible! Although the air mass is indeed coming from the Arctic region, it does not mean the cold will be very extreme. But the last days of March will be much colder than normal, that’s pretty much likely to expect based on the global ensemble model guidance.

NEW UPDATE: Unusually intense Arctic outbreak will spread across much of Europe through the end of March – additional frost damage is likely

What it can be seen on the overall pattern over the North Atlantic and European continent, is again upper-level ridging developing over the North Atlantic towards the weekend. Both global models GFS and ECMWF are hinting the formation of a *very* powerful and large upper ridge and surface high-pressure system, potentially even reaching more than 1050 mbar in its center. That is pretty extreme! This will then support an advection of the air mass with meridional (northerly) flow, directly from the Arctic region into western Europe and further south through the last days of March. The southward moving short-wave trough on the eastern side of the ridge will deepen significantly over southwest Europe after the weekend. 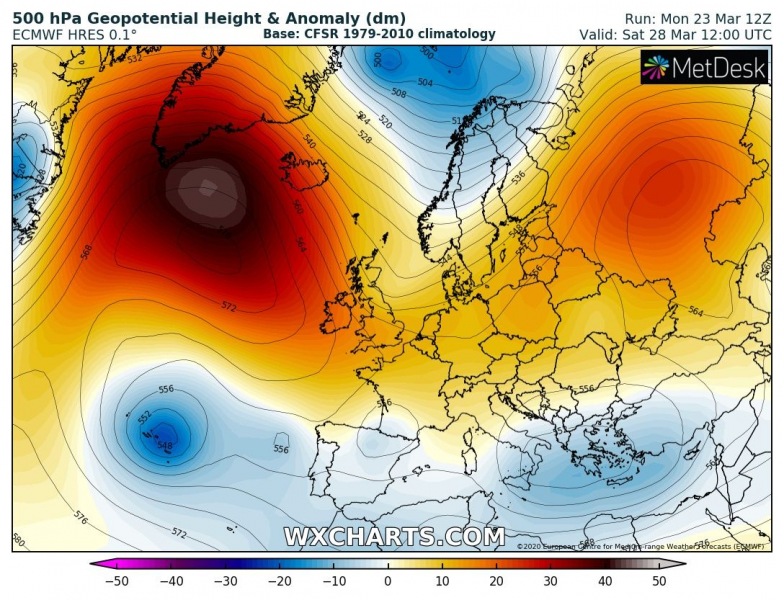 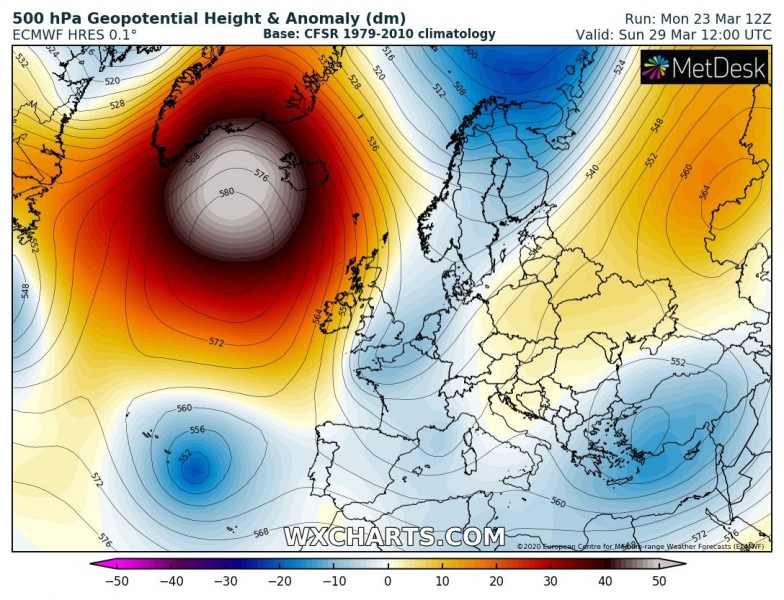 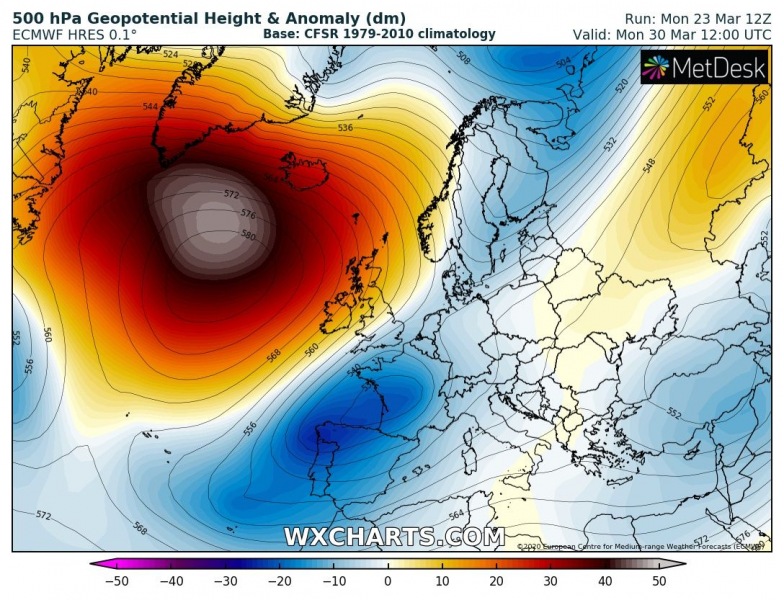 The cold advection starts during Friday’s night, soon after the faster-rising pressure of the North Atlantic high-pressure system. A very cold air mass collects over the Greenland Sea and spreads directly south towards the North Sea, Scandinavia and UK on Saturday. On Sunday, when the upper-ridge becomes the strongest and the related trough/core over western Europe deepens, the cold advection intensifies and continues further south into France and towards Iberia. It maintains even colder temperatures over the UK! GFS and ECMWF models more or less agree on this solution until Sunday, then some uncertainties are seen how the pattern turns on Monday. This needs to be monitored further in the coming days. 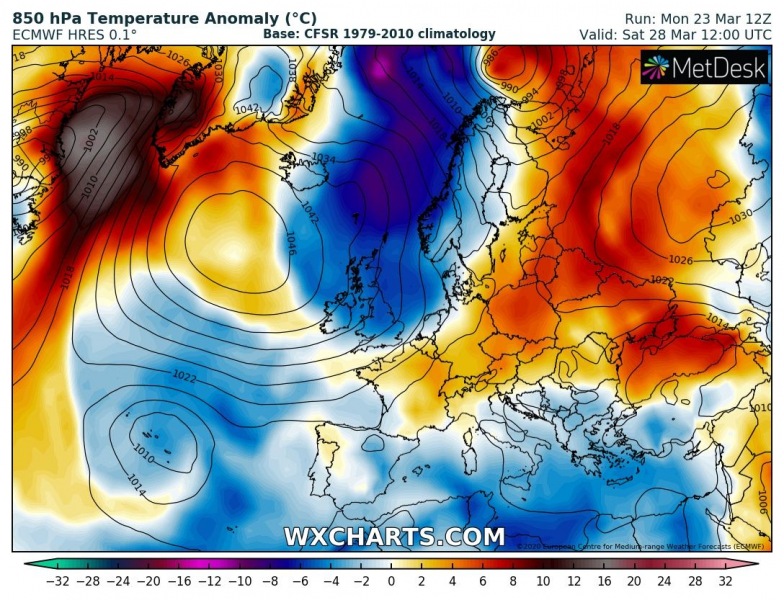 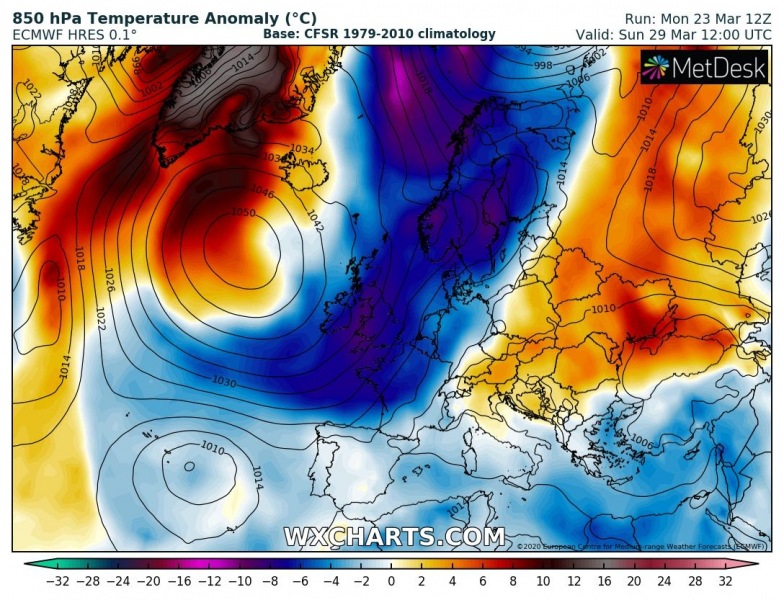 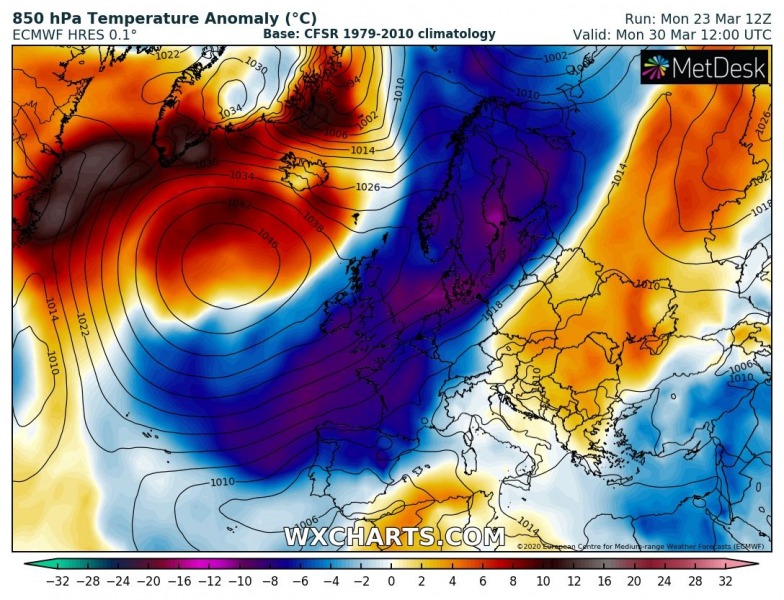 Here is the closer view of the cold outbreak spreading across western Europe, starting from Saturday morning until Monday when it also pushes across the Bay of Biscay, France and Iberian peninsula: 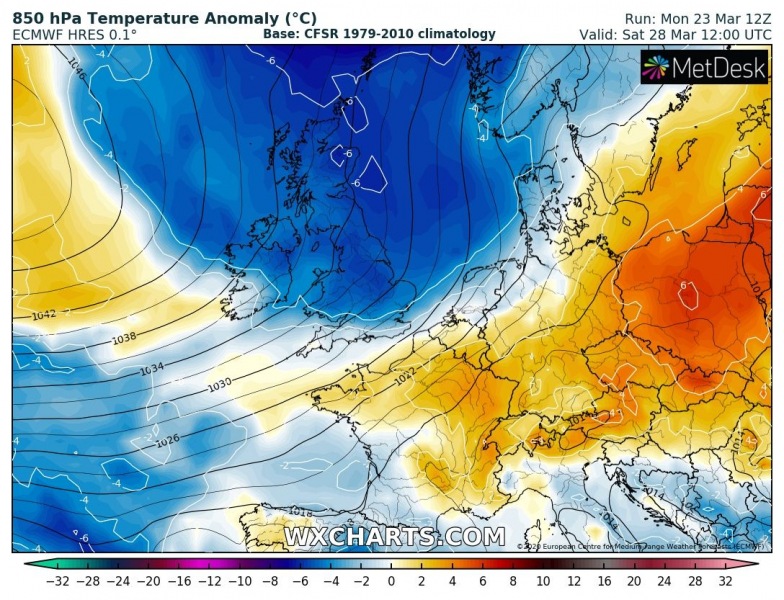 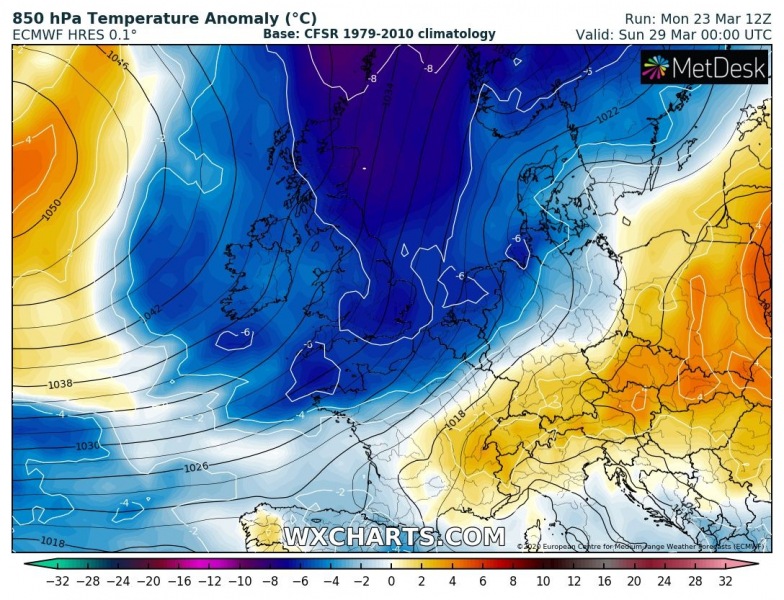 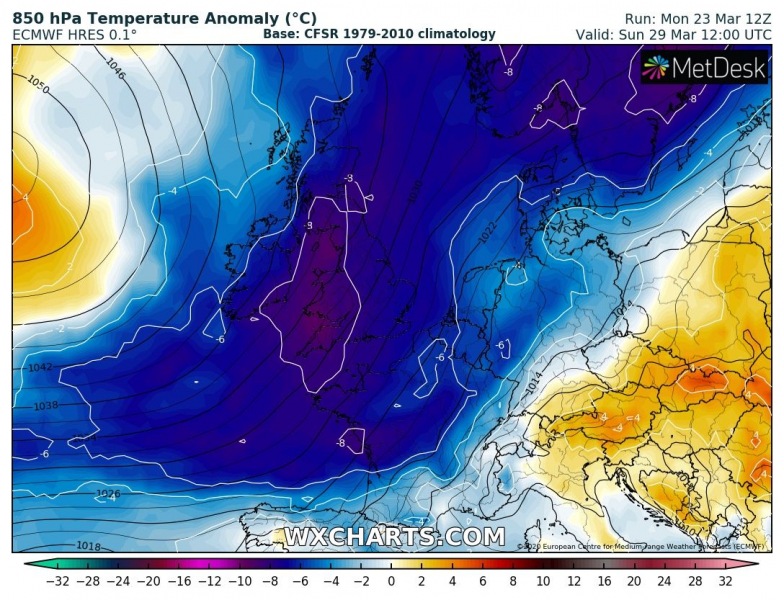 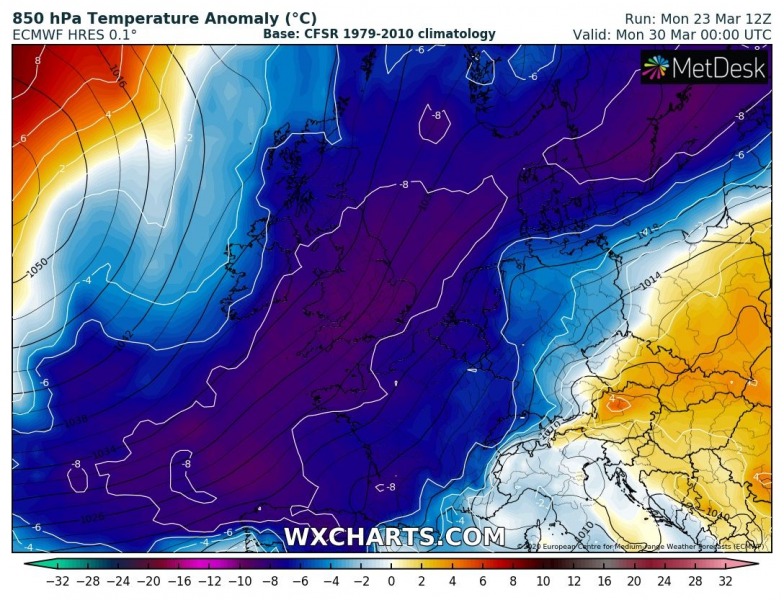 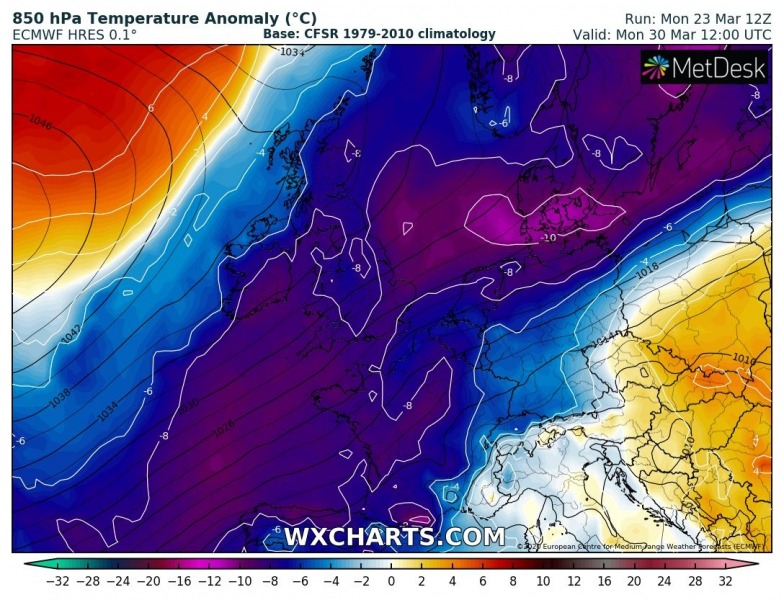 The last days of March will therefore be quite cold across western Europe, with potentially frosty mornings across UK, Ireland, and Wales. Also over Benelux and northern France. Depending on the position of the high-pressure system center, the persisting winds might help to limit a significant frost occurrence. 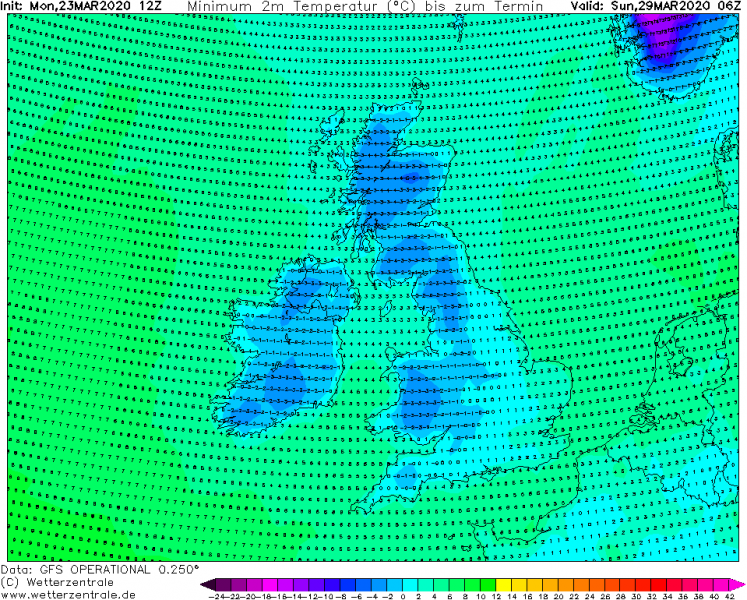 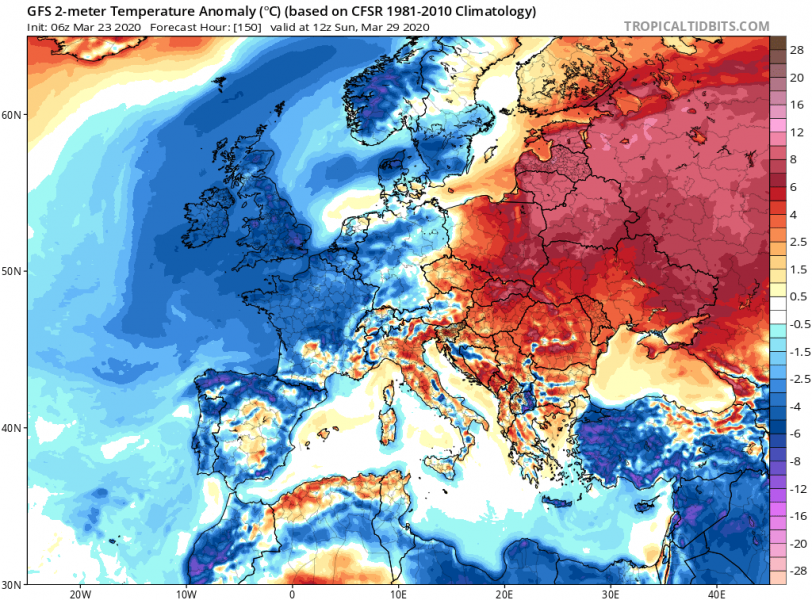 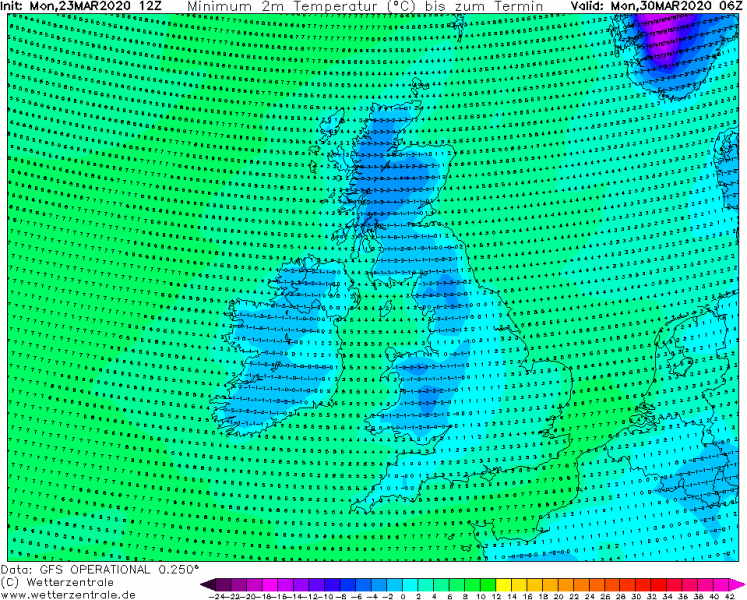 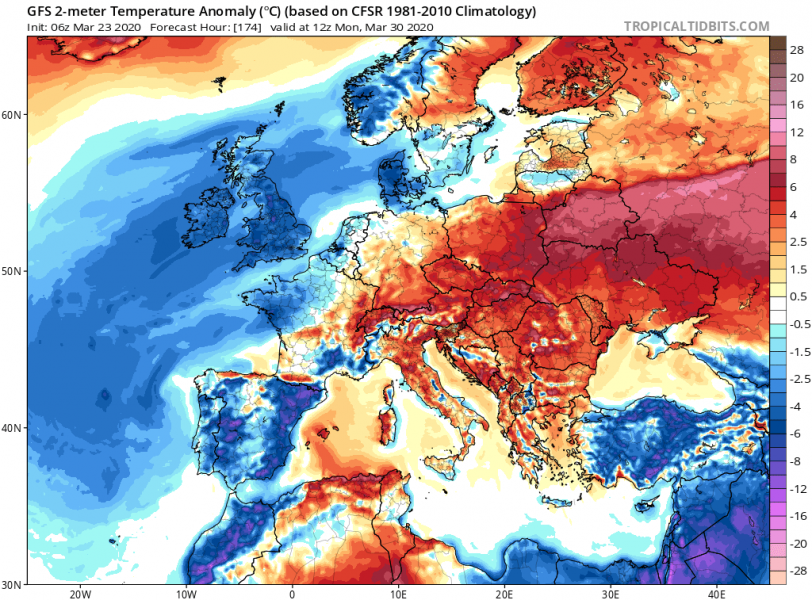 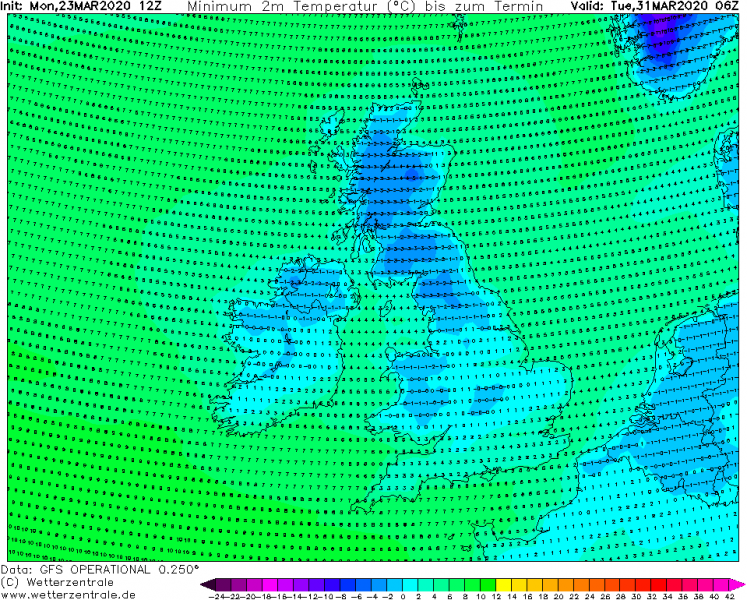 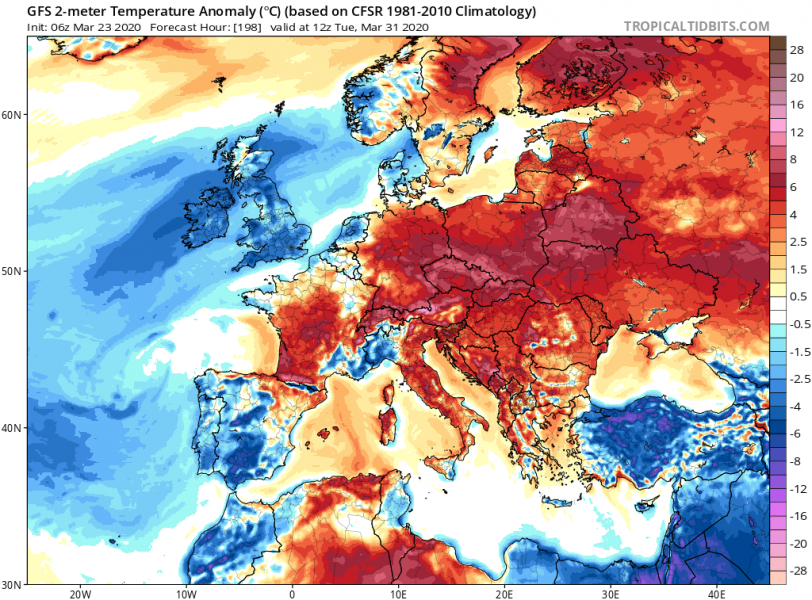 Snowfall is also possible with the very cold air mass spreading across western Europe, attached are GEFS model snow probability maps from Saturday through Monday. Chances are quite hgih based on the latest model guidance. However, there will be no significant frontal systems over the UK and Ireland, so the potential for thick snow is rather minimal for now. 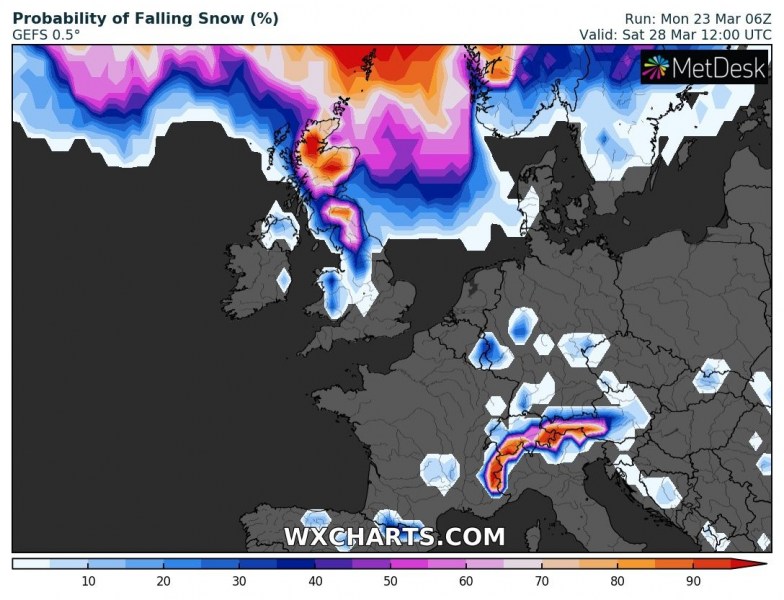 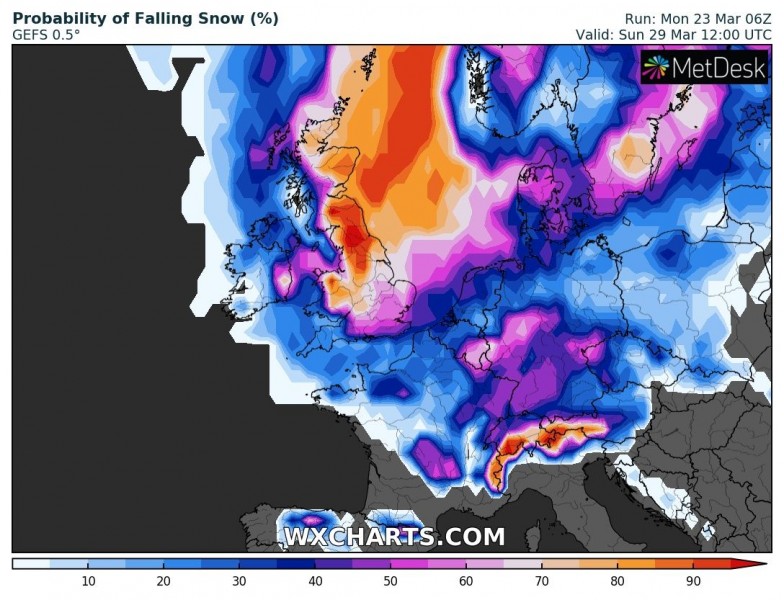 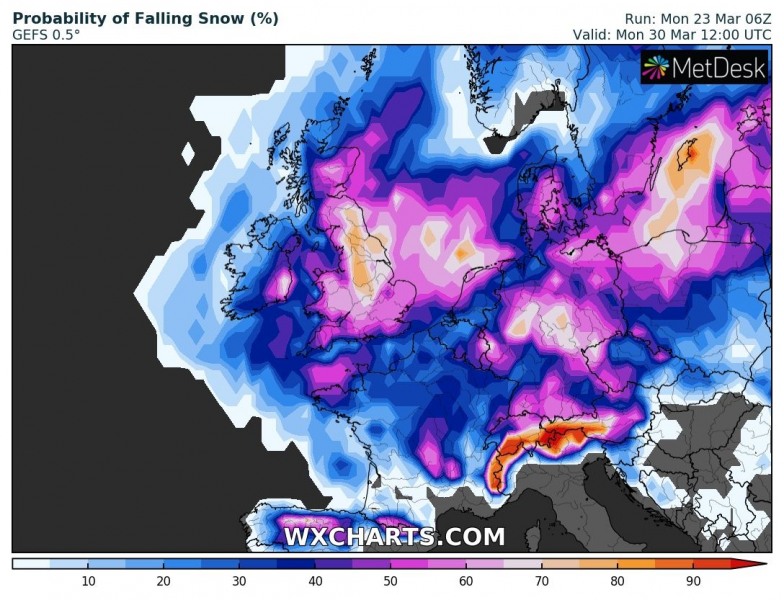 Although this pattern evolution seems rather far in advance on the mid-range, ensemble models are hinting it quite confidently over the last 2 days. We will continue monitoring it further and will be posting updates in the coming days – stay tuned.

Meanwhile, the first cold outbreak is already ongoing across east-central Europe and the Balkans this week, resulting in much colder weather and lots of snow in some areas: