Skip to Content
+++ Extreme amount of rainfall with major flooding threat expected across the northern Mediterranean and southern Alpine region this weekend and into early next week – Sunday through Monday, October 27-29th +++ 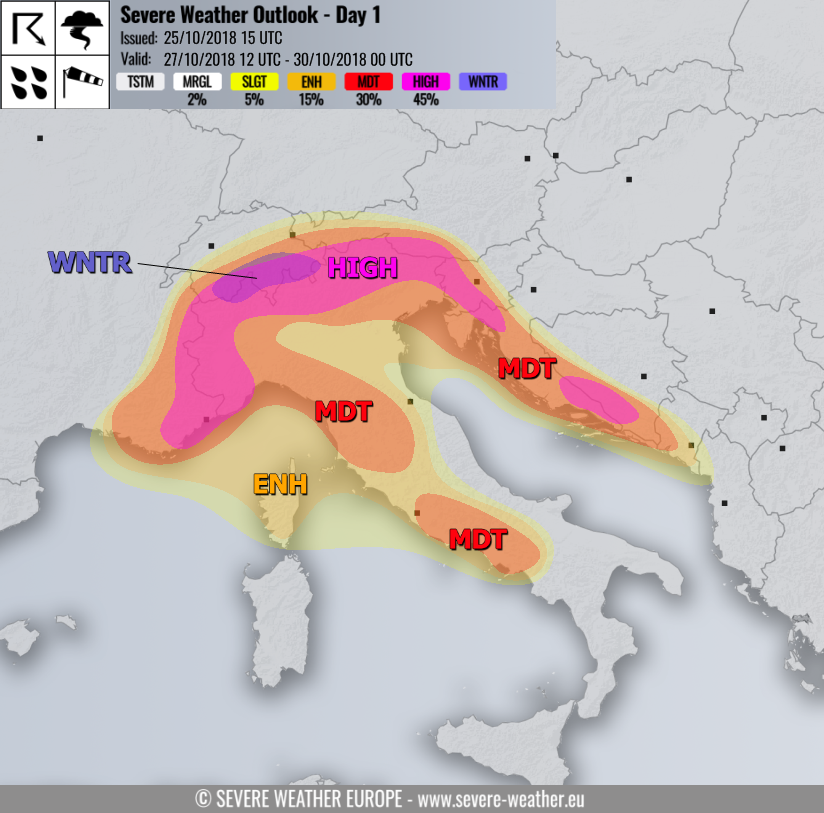 The pattern across Europe brings a major flip this weekend. The ridging over the N Atlantic and western Europe will collapse with an Arctic outbreak pushing towards the Iberian peninsula and western Mediterranean. Ridging will then strengthen over eastern Europe. This will establish a stalled baroclinic / frontal zone across central Europe with several deep cyclones across the north / central Mediterranean. Intense southerlies will advect very moist, warm and unstable airmass towards the Alps. Convective and orographic rainfall will result in extreme amounts of rainfall through 4-5 days period, likely in excess of 300-400 mm in some areas. In addition, severe storms with tornado threat will develop across the eastern Ligurian and northeast Adriatic seas.

HIGH risk has been issued for southern and western Alps across extreme SE France, N/NW Italy, S Switzerland and Austria, W Slovenia and extreme NW Croatia with threat for extreme amounts of rainfall through the 72 hour period. A combination of persistent strong orographic rainfall, combined with severe convective storms and torrential rainfall will likely lead into huge amounts of rainfall across large areas, reaching total rainfall sums 200-300 mm with locally even more than 400 mm possible. Such amounts of rainfall in relatively short period of time are expected to produce flash floods and enhance threat for damaging flooding and landslides in the mountainous terrain.

HIGH risk has been issued for extreme south Croatia into south Bosnia and Herzegovina where another rainfall maximum is expected due to persistent strong orographic precipitation. Additionally, convective bands are likely to enhance rainfall amounts and sums in excess of 200 mm are expected. Local flooding is likely to occur as well.

MDT risk has been issued for parts of central Italy and south Apennines where another rainfall maximum is expected, due to strongly unstable airmass advecting inland into the mountainous terrain. It will produce both orographic and convective precipitation. Rainfall sums could reach 150-200 mm locally. An additional severe threat is expected across the eastern parts of Ligurian sea and northeastern Adriatic sea where severe convective storms will form. These will be fueled by very moist and unstable airmass, driven by the persistent very strong south/southeasterly low-level winds. Very strong deep layer and low level shear will be in place, resulting in robust environment conductive for intense severe storms. Threat will exist for very intense rainfall as well as severe winds and tornadoes, given the strongly enhanced low-level shear and helicity.

ENH / SLGT risks have been issued for surrounding areas of HIGH / MDT risks where excessive rainfall are expected as well, but less robust than across other areas.

WNTR risk areas have been placed across parts western Alps where an excessive amount of snowfall is likely through Sunday and Monday, locally reaching close to 100 cm of fresh snow above 2000 m elevation. This will enhance the risk for avalanches.

Please refer to the mesoscale discussion for more details: