As discussed in one of our previous outlooks, the significant results of a Sudden Stratospheric Warming and related Polar Vortex split earlier this month, are now coming into effect. Next week, a strong ridge / high pressure system strengthens over the Arctic region while a very dynamic pattern establishes across western, central and southern Europe. A channel / corridor from the northern Atlantic will develop a ‘train of deep troughs / systems’ moving across western Europe towards central Europe and the Mediterranean – this will significantly enhance winter weather with severe phenomena as well, including flooding, intense snowfall and blizzard conditions in some regions.

The pattern evolving this weekend will gradually intensify next week. Ridging over the Arctic region will strengthen and allow systems to develop over the western Europe and intensify on their way towards the Mediterranean. A deep trough develops over the UK on Tuesday and rapidly deepens while moving across France on Wednesday, Jan 23rd. The trough becomes a really big and particularly extremely deep system when it enters the central Mediterranean on Thursday. A day after, it remains generally over the same region while gradually moving towards the Balkan peninsula. 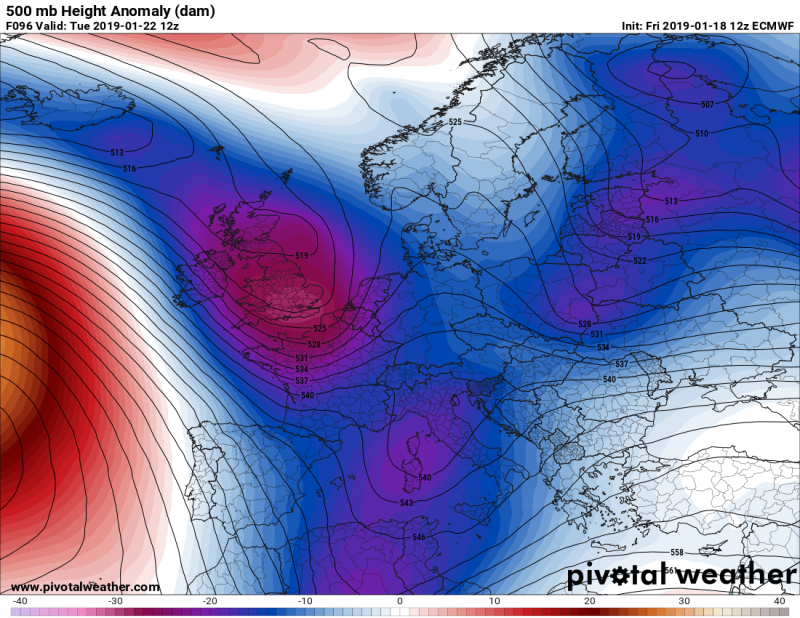 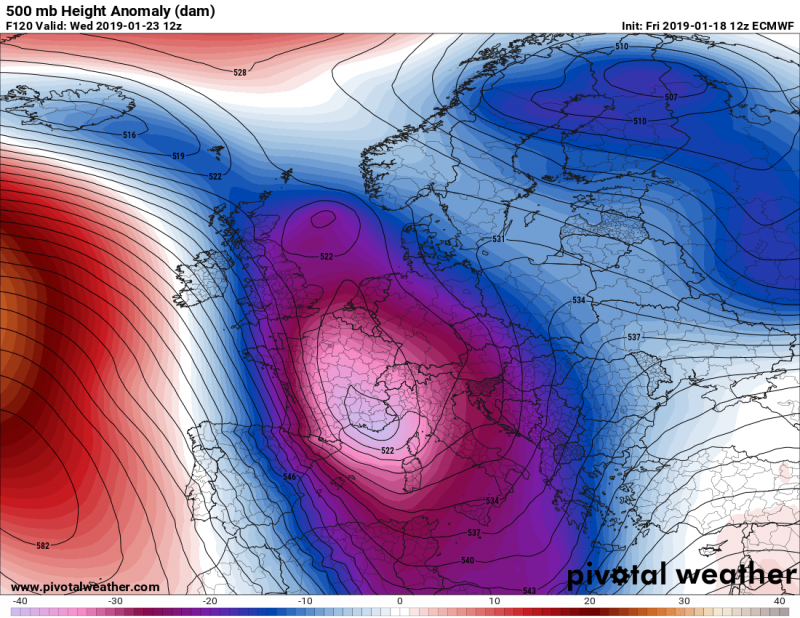 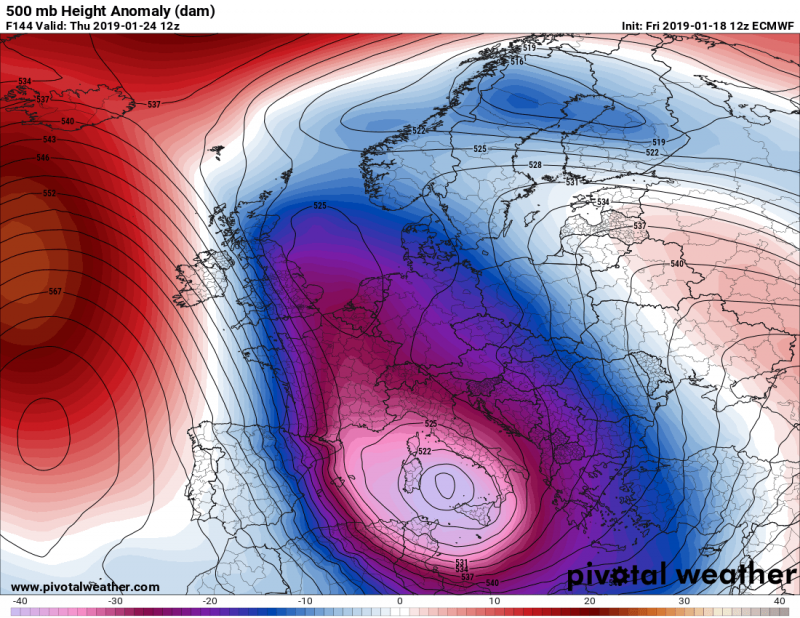 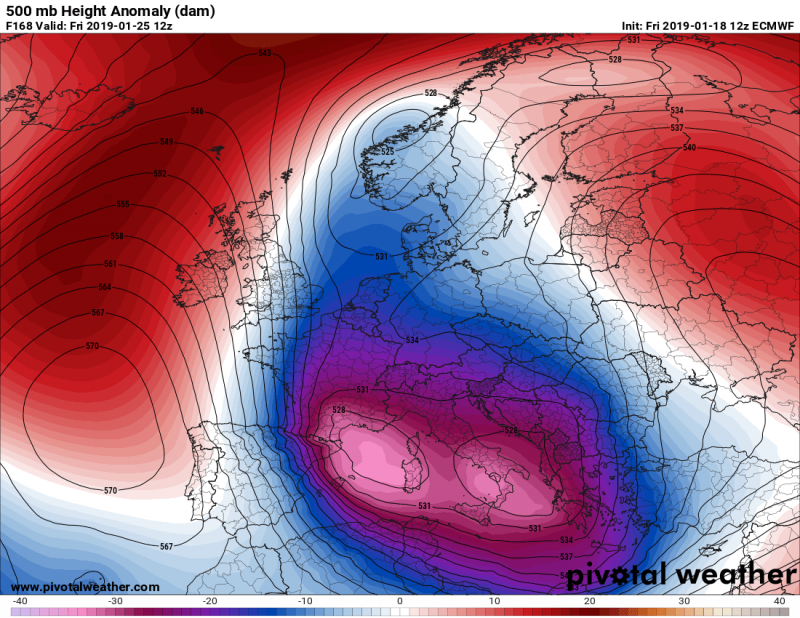 In response to the deep trough across central and southern Europe, much colder weather is expected for the western half of our continent. New, much colder airmass pushes across the western Europe on Tuesday. Cold air advection intensifies on Wednesday when the parent trough significantly deepens on its way towards the north Mediterranean. On Thursday, the trough develops a very deep cyclone across the central Mediterranean and an intense cold outbreak spreads across the region. The pattern then establishes a textbook corridor of a very strong meridional flow, delivering extremely cold maritime airmass directly from the Arctic region across west-central Europe towards the Mediterranean over the weekend days. 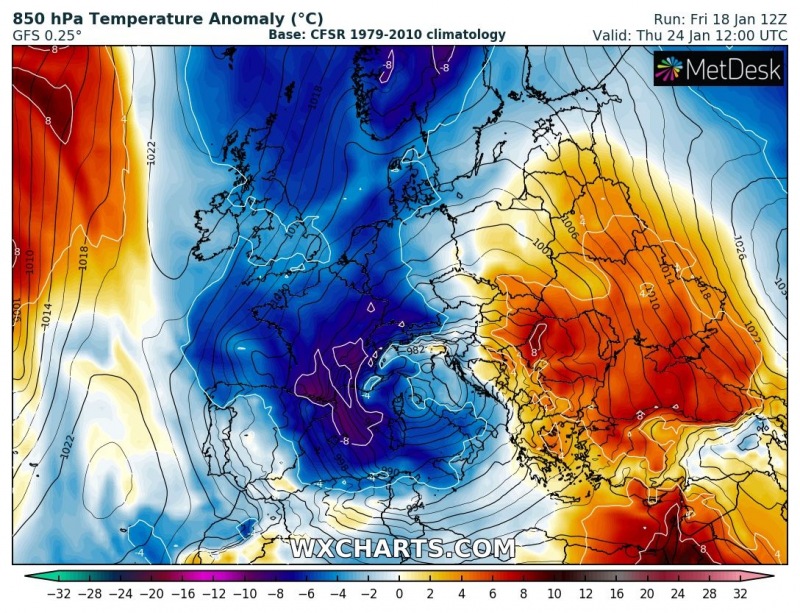 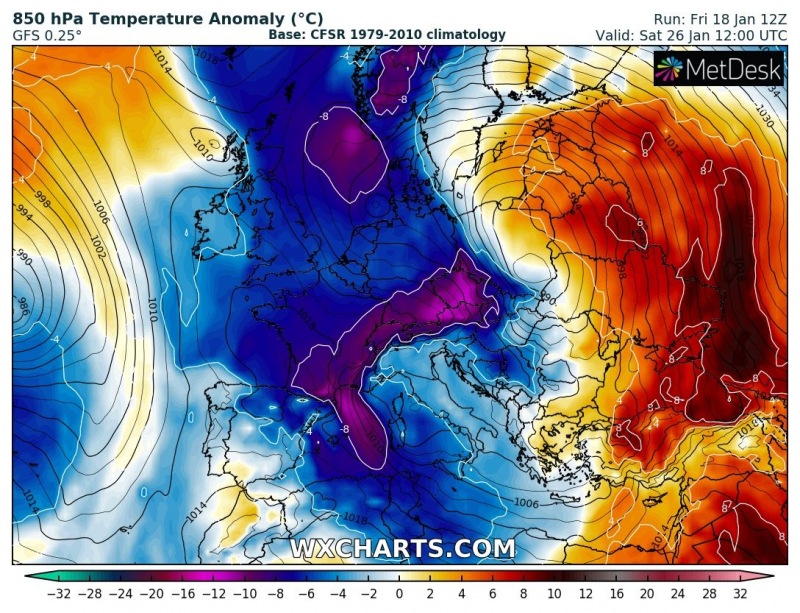 Looking at the mean sea level pressure maps, once the trough enters north Mediterranean, it soon develops a classic lee cyclone over the Ligurian sea – a Genoa low. -the cyclone then rapidly deepens into 970-980 mbar severe system while it is gradually moving across Italy towards the western Balkan peninsula. Such a very deep system will likely develop all kinds of severe weather, including damaging southerly Scirocco winds across Tyrrhenian and Adriatic sea and also severe storms with damaging flooding under extreme shear around the cyclone. Also intense and excessive snowfall locally – details on these events will be better known in the coming days when some uncertainties regarding the exact position of the cyclone clear.

Aside note: notice the ‘train of cyclones’ ongoing across the north Atlantic and western Europe towards the Mediterranean – this will bring very dynamic weather through all week in many areas. 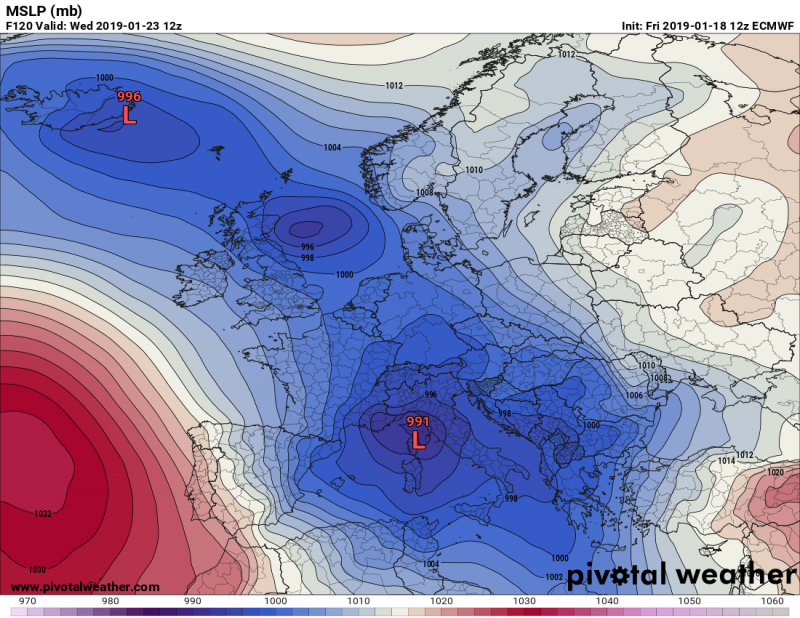 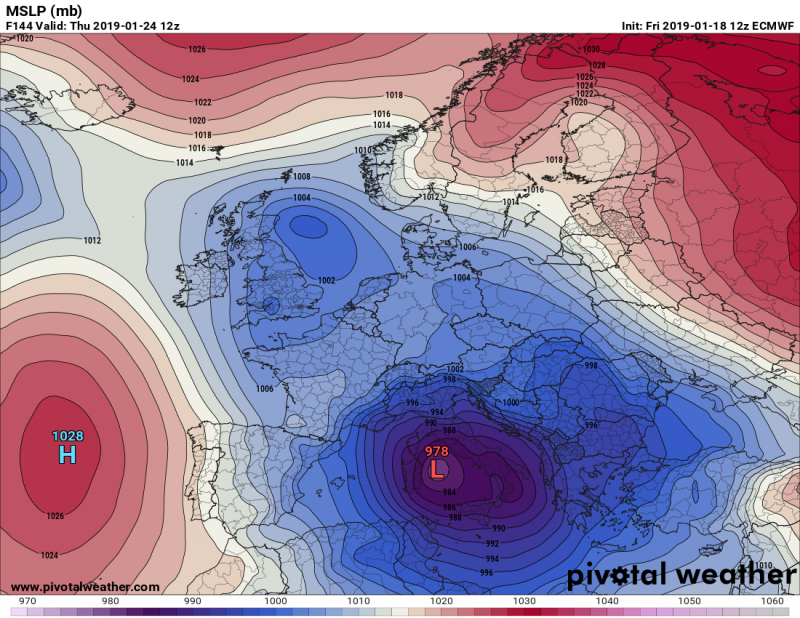 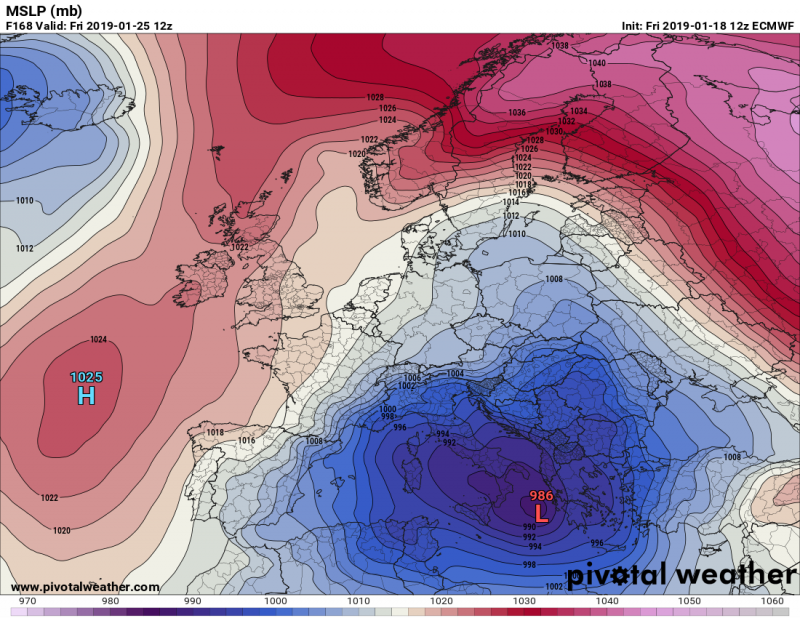 A quick look at the 5-day anomaly maps indicate the period through the rest of January will be much colder than average for western half of Europe, as well as north-central Europe and most of the Mediterranean. Warmer weather is likely over the east-southeast Europe through this period, however. 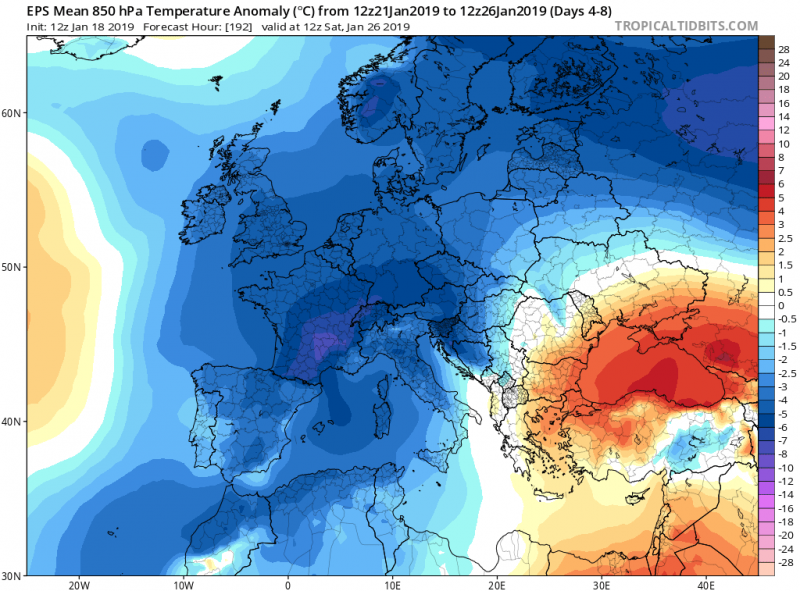 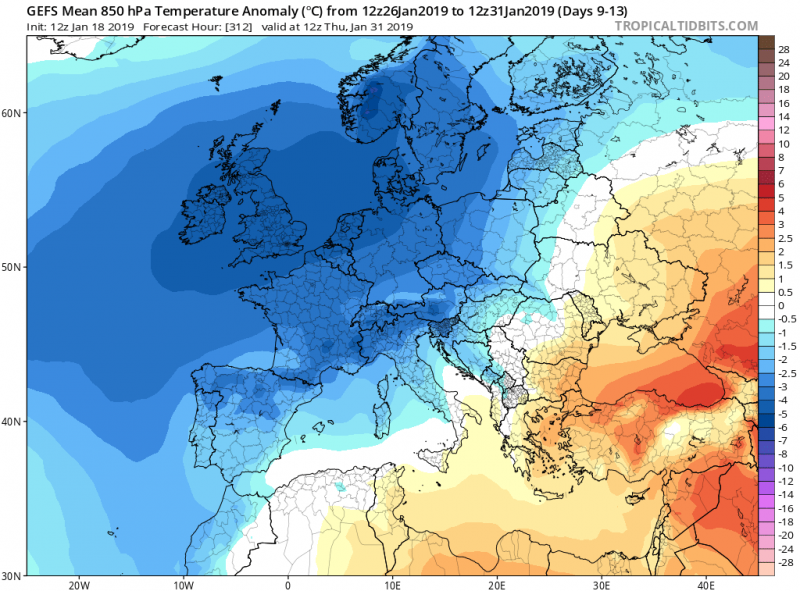 More details on the cyclone evolution will be available soon – stay tuned!