Autumn is upon us, which means that the winter forecasting season has begun. September seasonal forecasts are what we often call “an early look”, since the forecasts are on a 3-5 month lead time. That usually means lower confidence, but sometimes these early look forecasts can provide basic trends and hints of the potential development.

There is one very important thing to keep in mind before looking ahead, far into the meteorological future: Seasonal forecasts are used as a guidance for larger scales only, averaged over longer periods of time! They are used to forecast chances of trend deviation from the norm (warmer, colder, lower pressure, higher pressure,…), on a continental or global scale, and averaged over 30-90 (or more) days. Seasonal forecasts are never trying to forecast the temperature in Paris, on January 28th, 2020, at 12:48 for example, since that is impossible so far ahead (for now). The essence of seasonal forecasts, as an example, is to calculate if in entire January (or any other month), average air pressure over the North Atlantic or North Pacific (or any other region) will be higher or lower than the long term (usually 30-year) average for that month. Or if the chances for strong anticyclone formation in February over Siberia are 30% or 60%, and how that % is changing over time (getting less likely or more likely). That is what the long range forecasts are all about. Knowing all this, we can understand why the old saying “if we can’t even forecast 3 days ahead, why do we waste time forecasting 3 months ahead?” is kinda false. Because long range forecasts are something completely different than the weather forecast we watch on TV every night. One is forecasting the temperature on your backyard for every hour, for the next 2 or 3 days, while the other one forecasts if air pressure over the Atlantic ocean will be higher or lower in January and February, compared to the 30-year average. It is kinda like comparing oranges to bananas. Both are fruits, but they grow on completely different trees and taste differently.

What to look at? 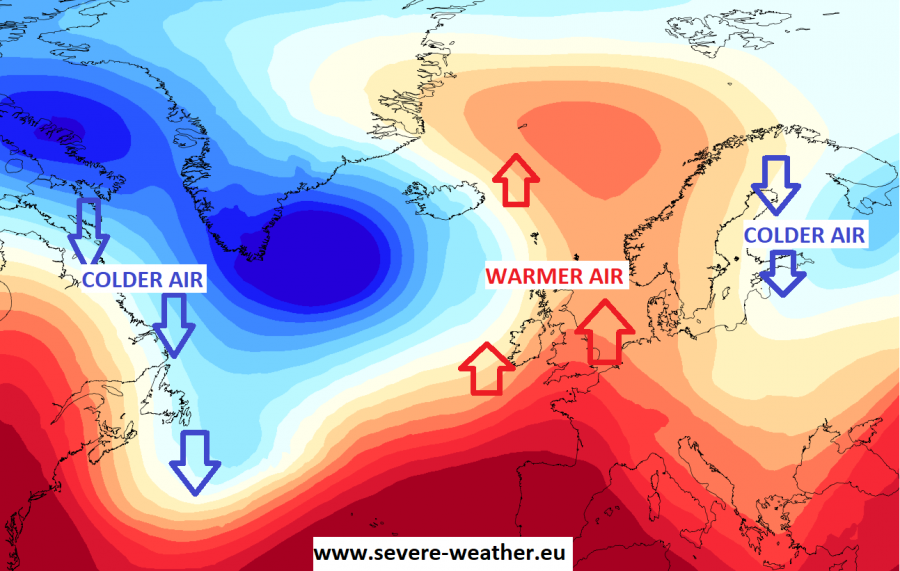 The most common long range parameter used, is probably the 500mb (or 700mb for the CFS model) geopotential height anomaly. Simply put, it forecasts air pressure anomalies (higher/lower than the 30-year average). It is general knowledge that air pressure drops with altitude. So geopotential height tells us at what altitude the air pressure has a certain value, like 500mb or 700mb.  We can usually find 500mb pressure between 5-6 km altitude, and 700mb around 2,6-3,1 km altitude. In a strong low pressure system, we can find 500mb geopotential heights lower than 5 km altitude, and in a strong high pressure system, above 5,8 km altitude. In long range forecasting, we usually look at geopotential height anomalies, rather than mean values, since we are looking at monthly averages over large regions. 500mb or 700mb geopotential height is not the same as surface pressure (mean sea level), but it gives a much better idea of the global circulation and weather patterns, which is really the essence of seasonal forecasting. From the geopotential height anomalies, we can interpret where troughs and cyclones are more likely to appear (negative values – lower pressure), and where ridges and anticyclones are more likely to appear (positive values – higher pressure). From this, we can further interpret where we are more likely to see warmer air, for example on the east side of a low pressure area, or the west side of a higher pressure area, where we usually find the warm south-southwest flow. The opposite goes for the cold air, which we usually find on the west side of a low pressure system, where the northern flow is. You can refer to the example image above, where the colder/warmer air movement is, relative to pressure systems.

There are many long range models and forecasting systems. They are pretty similar to ordinary weather models in basic principles. They calculate global circulation, but taking into account all the elemental planes (coupled models), like the atmosphere, oceans, ice, ground (terrain and soil), etc… over longer time ranges. They usually consist out of 20-50 or more individual calculations and scenarios in one month, each one with slightly modified starting conditions (ensembles), averaging them all into a single final forecast. The most widely used forecasting system are the ECMWF and UKMO seasonal forecasts from Europe and the CFSv2 model from USA. The most “successful” on average is perhaps the ECMWF forecasting system, but results may vary greatly from season to season.

Below we see the ECMWF forecast for the upcoming winter (3-month average). It shows lower pressure in the Atlantic, and likely stronger cyclonic activity, and higher pressure over Europe. This is a typical positive NAO (North Atlantic Oscillation) pattern. This means warmer conditions for most of Europe, since the air flow across Europe is mostly from west and southwest, bringing mild and moist air from the Atlantic and the Mediterranean region. We can see a similar situation over North America, with low pressure in the west and high pressure in the east. Looking at the temperature anomaly forecast, we can see the warmer air under higher pressure areas, but this is perhaps a bit of a flaw in the models. For example, if we have a high pressure area over Europe, it means that colder air will flow down on its east side, as it spins clockwise. So in this case we should be seeing colder temperatures in Eastern Europe and the Russian parts, for example. But the model generally shows above average temperatures there. Also, with high pressure over Europe, we usually get cold air pooling in the lowlands and fog/haze, which can cause lower temperatures at the lowlands, while areas higher than 1.000 meters above sea level can get sunshine and warmth. 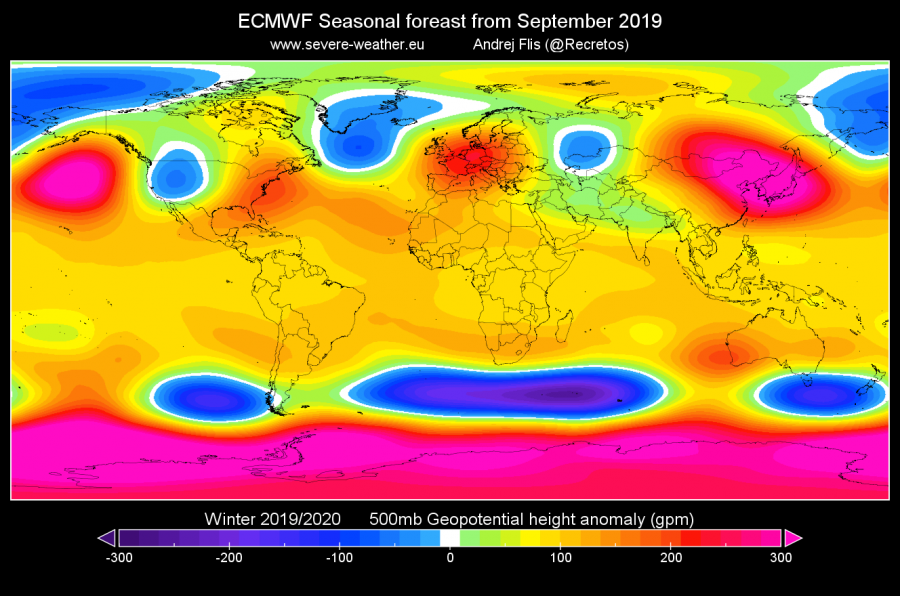 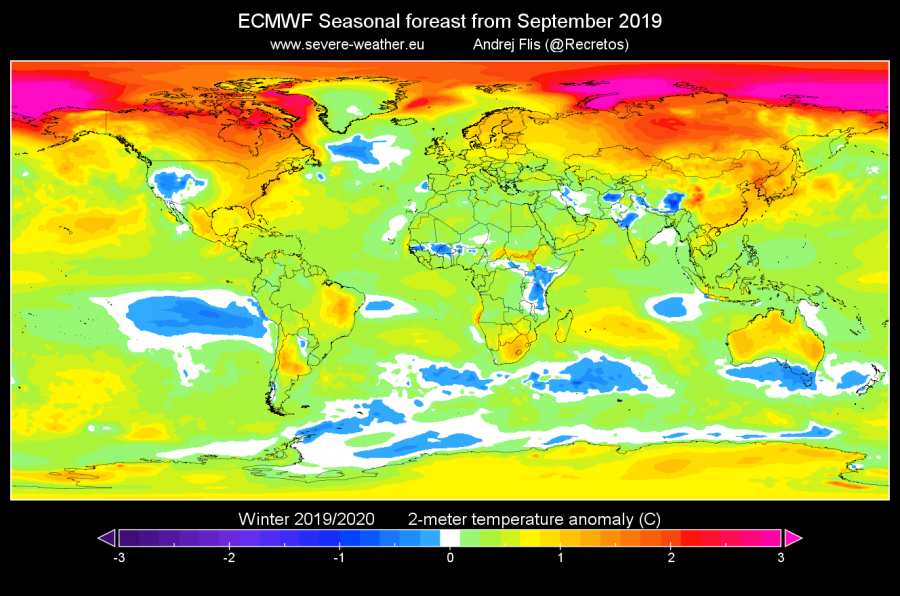 Staying in Europe, we have the UKMO seasonal model from the UK Met Office. It essentially shows a similar thing as the ECMWF, raising the confidence for a positive NAO pattern, and a milder winter in Europe. The difference is the strength/size of the low pressure area over North Atlantic. It is reaching into Canada, which would indicate more west flow into eastern USA, perhaps even northwest flow over NE USA, which would promote colder temperatures. But again, we do not see that on the temperature anomaly forecast. 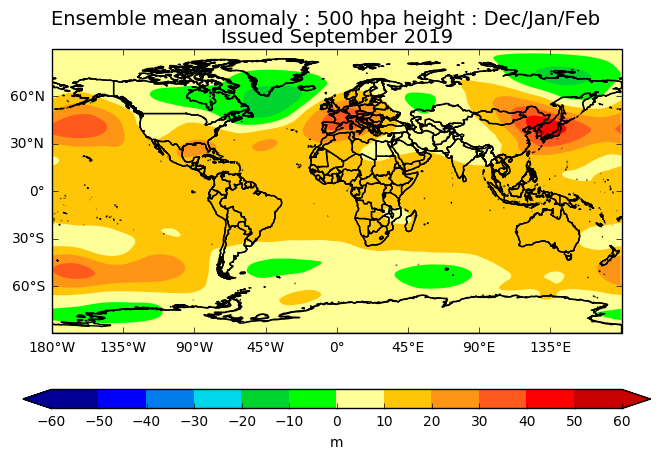 Going across the Atlantic to USA. There we can find the CFSv2 long range model. Yet another model that has lower pressure in the North Atlantic and higher over Europe. Again we see warmth over Europe and USA, but just like the UKMO above, this model also has more of a northwest flow over NE USA, and shows near normal temperatures there, opposite to the warmer tendency by UKMO. Unlike the ECMWF model, it actually has higher pressure in western USA, which is another factor in favour of normal to colder temperatures over eastern USA.

Last but not least, we have the Chinese long range model, from the BCC (Beijing Climate Center). It too has lower pressure in North Atlantic, but also has lower pressure signal over Eastern Europe and Russia. That would mean below normal temperatures over those regions and also parts of central Europe, but the temperature forecast does not reflect that yet again. 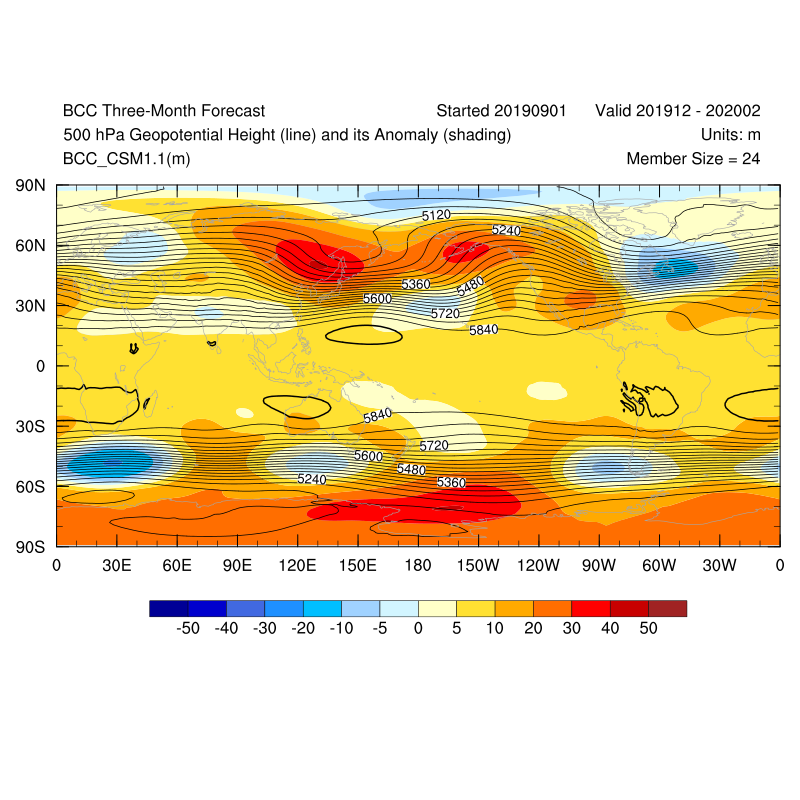 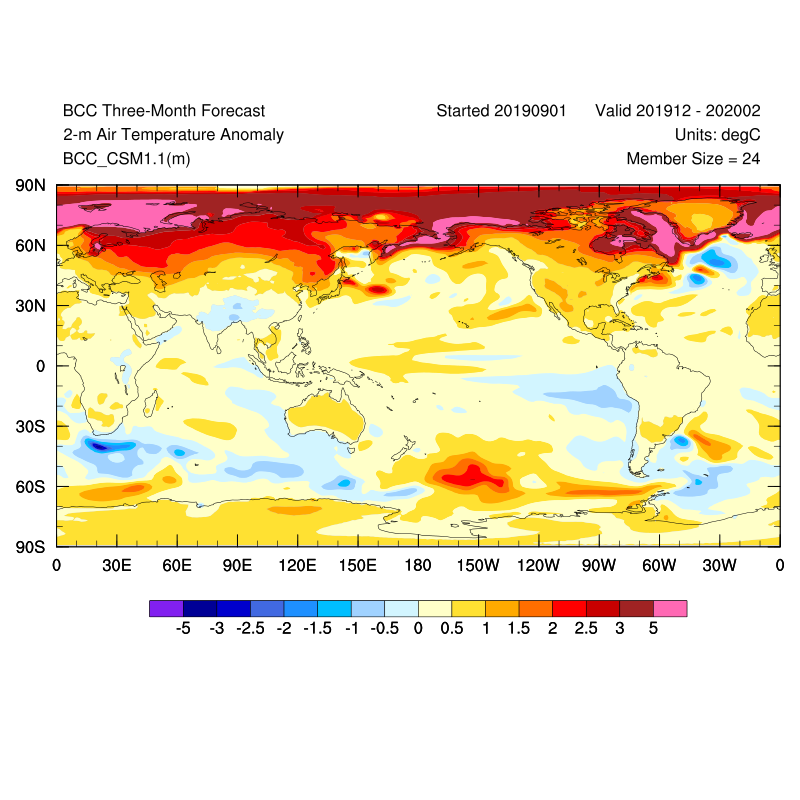 Most forecasts call for lower pressure than normal in the North Atlantic, and higher pressure over Europe, which means generally  milder winter in Europe. But, if you are a winter lower, do not despair! These forecasts are an average picture over 3 months (Dec-Jan-Feb), and show the general prevailing weather pattern. Even if the models would be completely accurate, it does not mean that such milder weather would last for 3 months. There can still be cold fronts and snowfall in between such milder patterns. The difference is that instead of the usual 20 snow days for example, you only get 8 or 10 snow days. So the models dont suggest what the weather will be like for 3 months straight, but just how it might look 40-60% of the time.

We will keep you updated on any important stratospheric development, and we will also check the long range models again, when they update in October.