Summer 2021 is slowly and steadily approaching. But we still have over a month of springtime left, so we decided to take a look at the early summer trends for 2021 across Europe and North America.

The weather never starts and never ends. It is in a constant flow, from one season to another. Our weather is connected globally through space and time, so we will first look at its progression from winter to spring, going into summer 2021.

FROM WINTER TO SUMMER

All of the clouds (and the weather that we feel) are found in the lowest layer of the atmosphere called the troposphere. It reaches up to around 8 km (5 miles) altitude over the polar regions and up to around 14-16 km (9-10 miles) over the tropics.

Above it, there is a much deeper layer called the stratosphere. It is a very dry layer, around 30km thick. This is where we can find the famous ozone layer. In January, a warming event occurred in the stratosphere over the North Pole, that changed the weather circulation across the northern hemisphere. 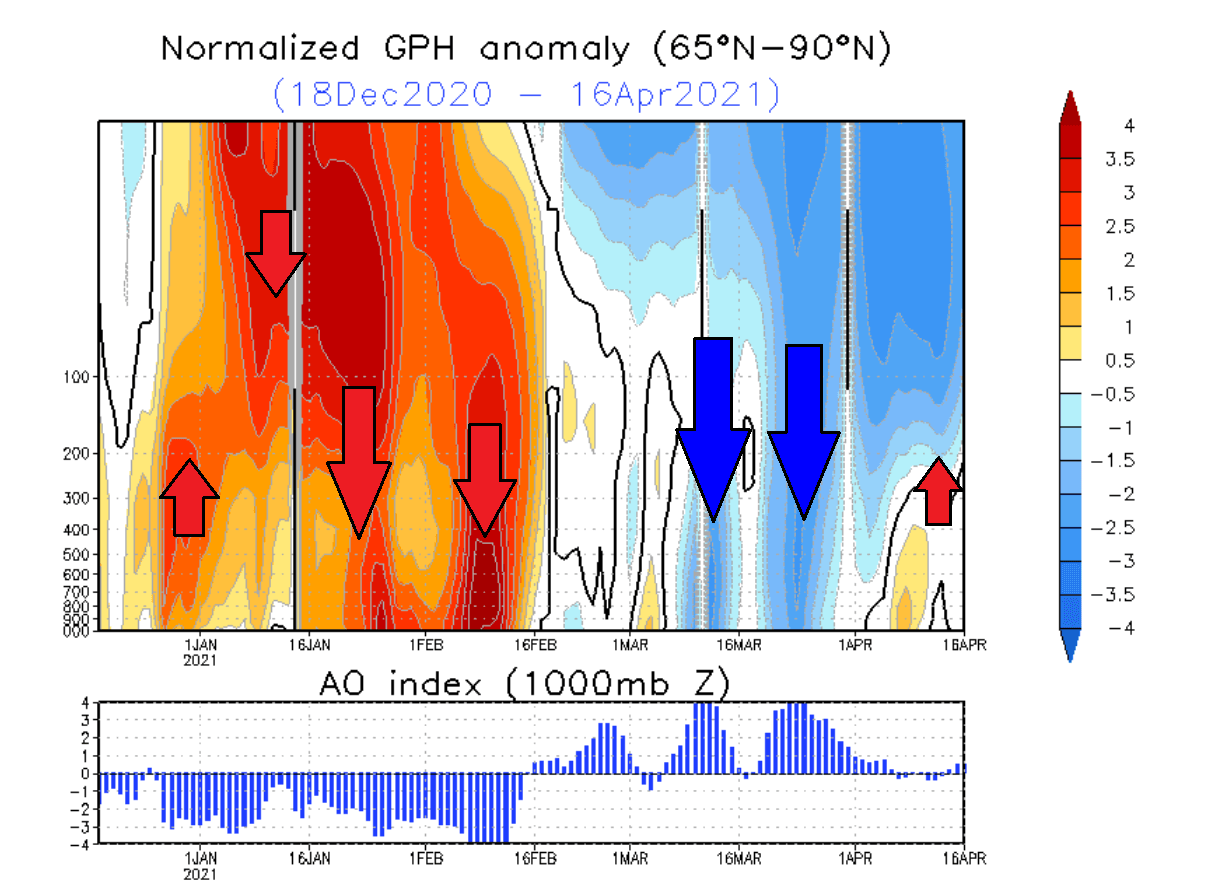 You can see strong positive values in the stratosphere in early January, associated with the higher pressure buildup during the stratospheric warming event. The event and/or its influence was slowly descending towards the surface over time. It reached the lower levels by mid and late January.

This persisted well into February, influencing the weather circulation even when the stratospheric warming was already over.

The image below shows the winter 2020/2021 pressure pattern, spanning from December 2020 to February 2021. You can see the strong dominant high-pressure area over Greenland and the North Pole. This high-pressure system was most powerful in January and February, following the stratospheric warming and the collapse of the Polar Vortex. 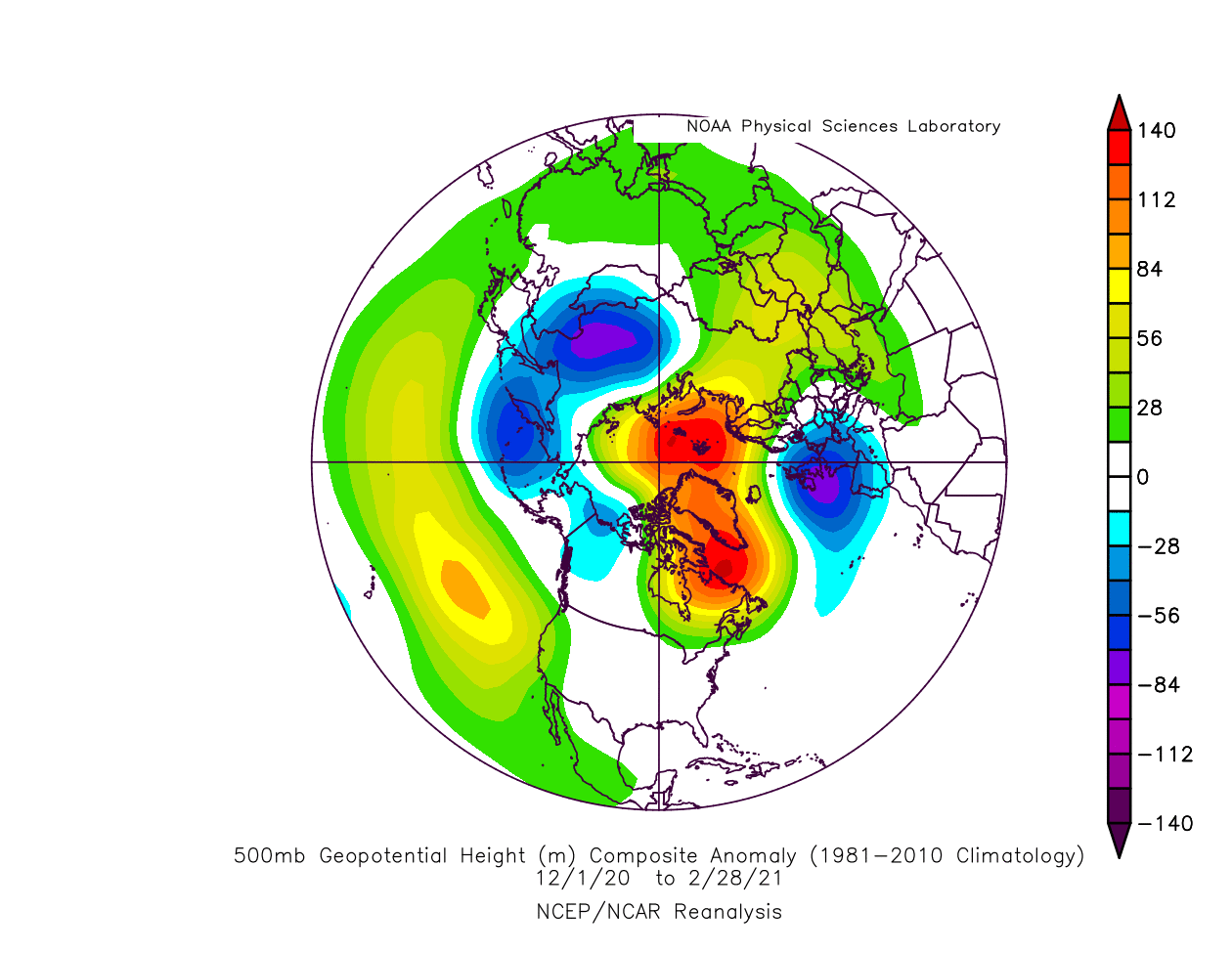 We produced a video that shows the temperature at around 5km altitude over the northern hemisphere and is a great example to showcase the polar weather circulation. You can nicely see how the polar circulation works across the Northern Hemisphere. It reveals quite a disrupted flow, with frequent colder air extensions into the United States and Europe.

A strong high-pressure system over the Arctic can really disrupt the weather circulation and can unleash the cold air from the Arctic regions towards the south. The image below shows the temperature anomalies in Winter 2020/2021. Warmer than normal temperatures were present under the high-pressure system over eastern Canada, Greenland, and the polar regions. Cold Arctic air was pushed out heavily into Siberia. 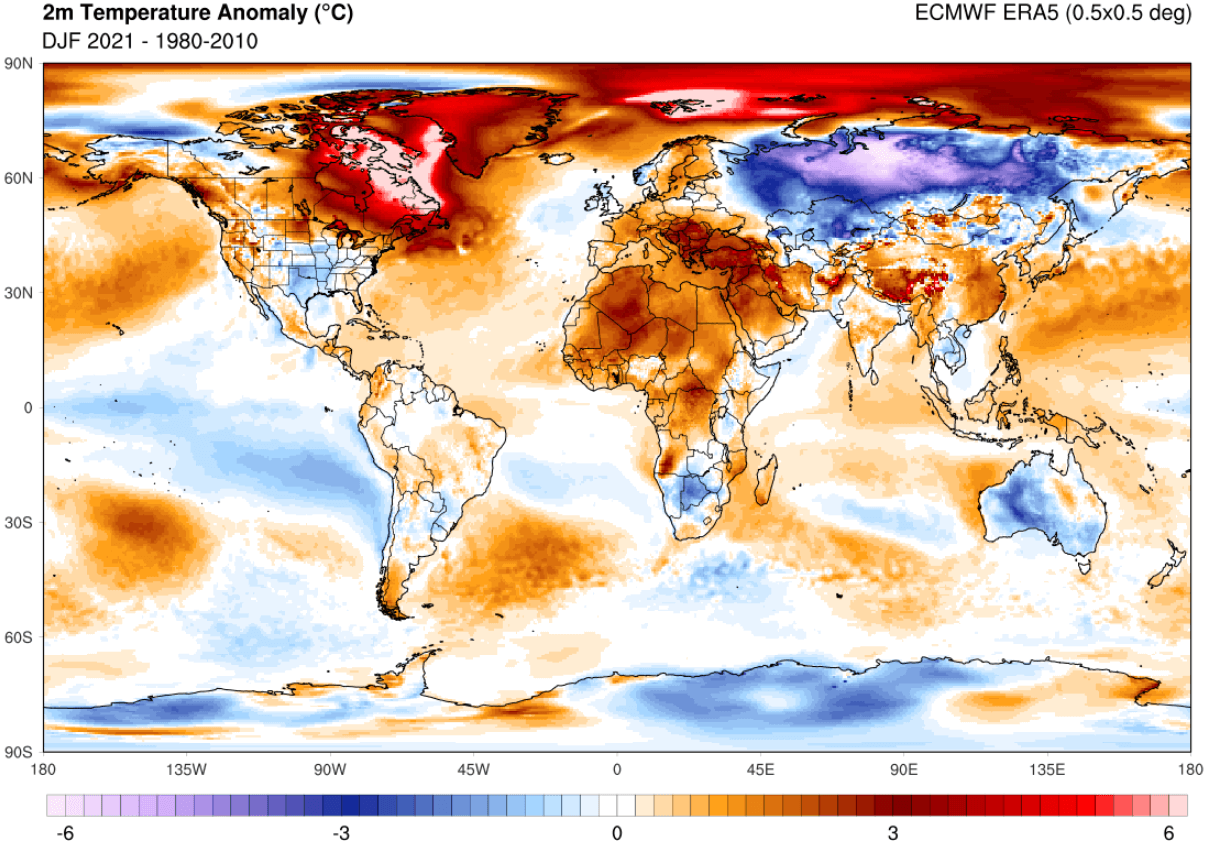 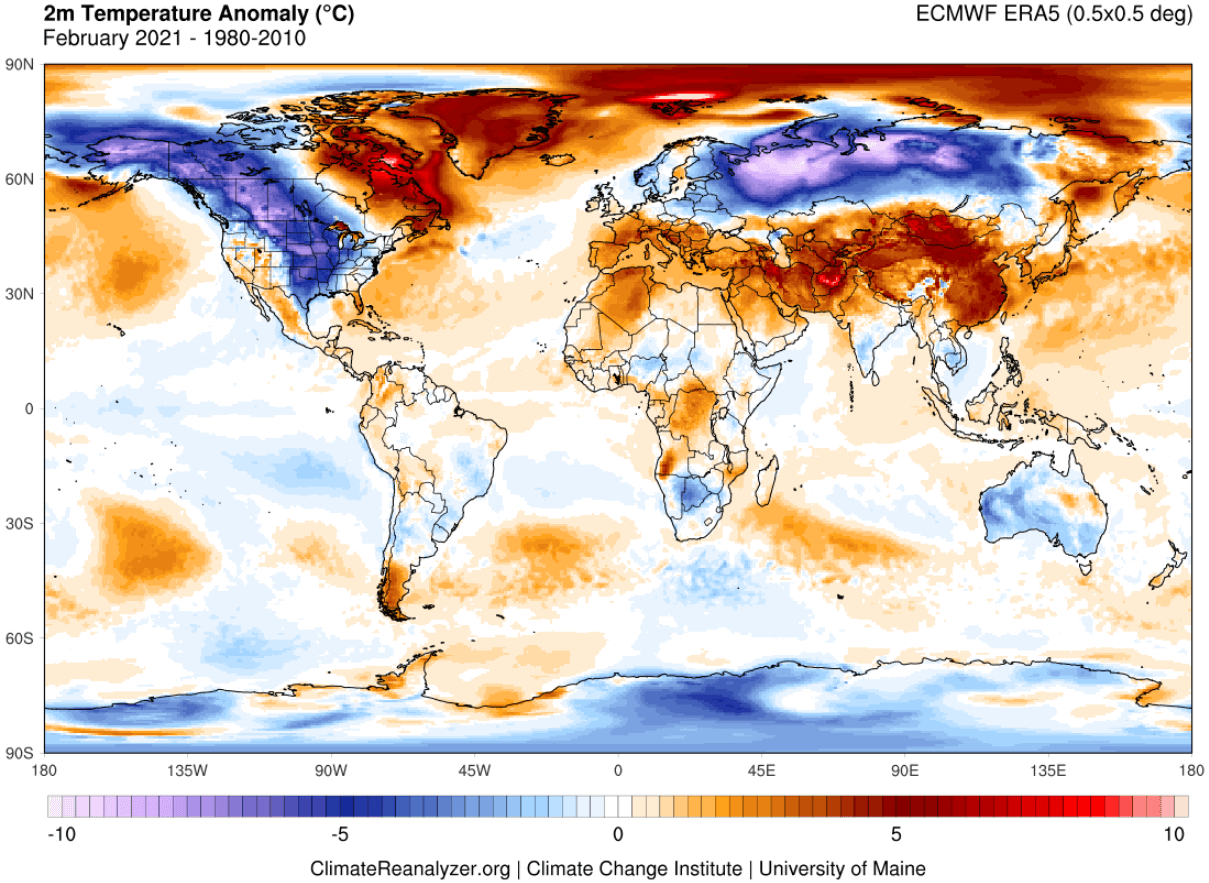 Meteorological spring began on March 1st and has so far brought a bit different pressure pattern. The image below shows the pressure anomalies from March 1st to April 18th. Lower pressure is now more dominant over the polar regions. A strong North Pacific blocking is now active, with a high-pressure area also over northwestern Europe.

Such a pressure pattern has brought warmer than normal temperatures into the central and eastern United States. But colder air was transported into Alaska and Northern Canada, and also into parts of central Europe, with a few snow events. 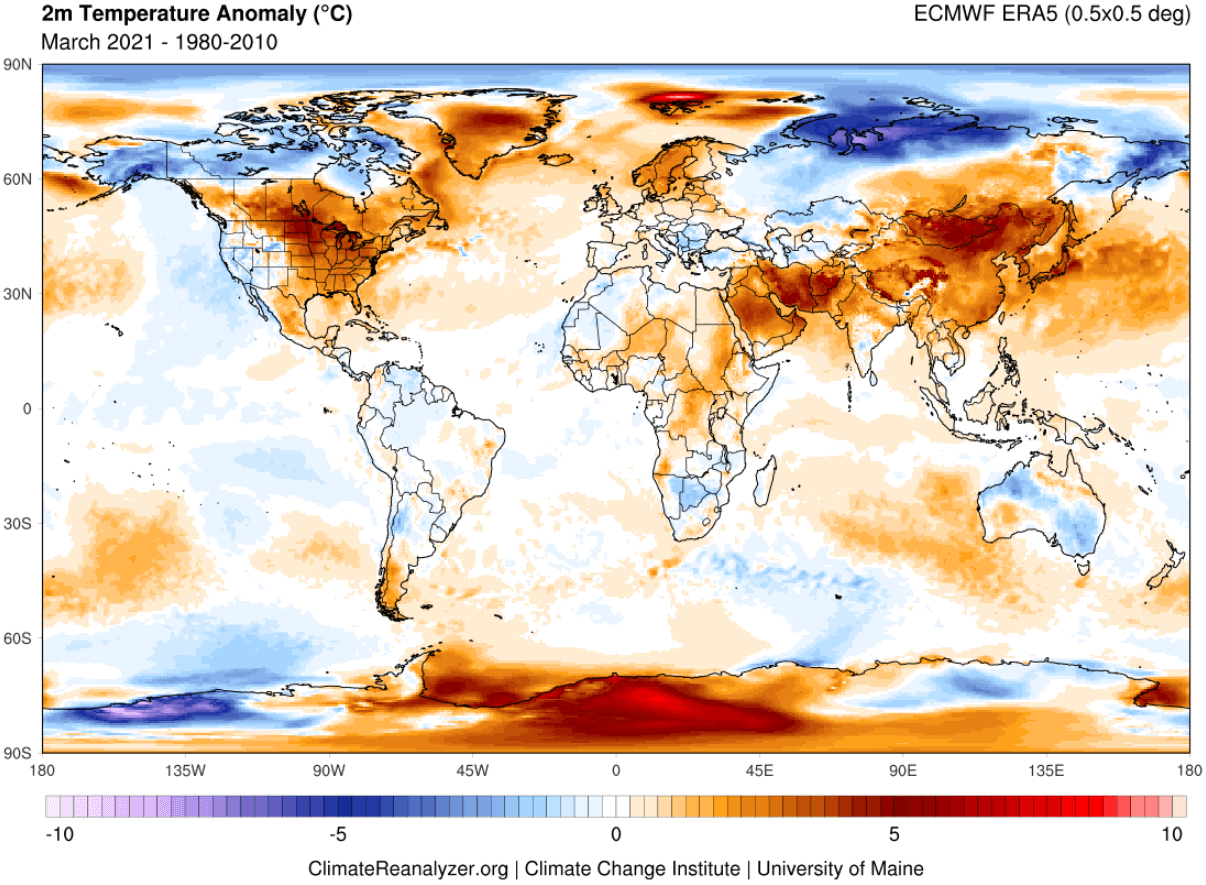 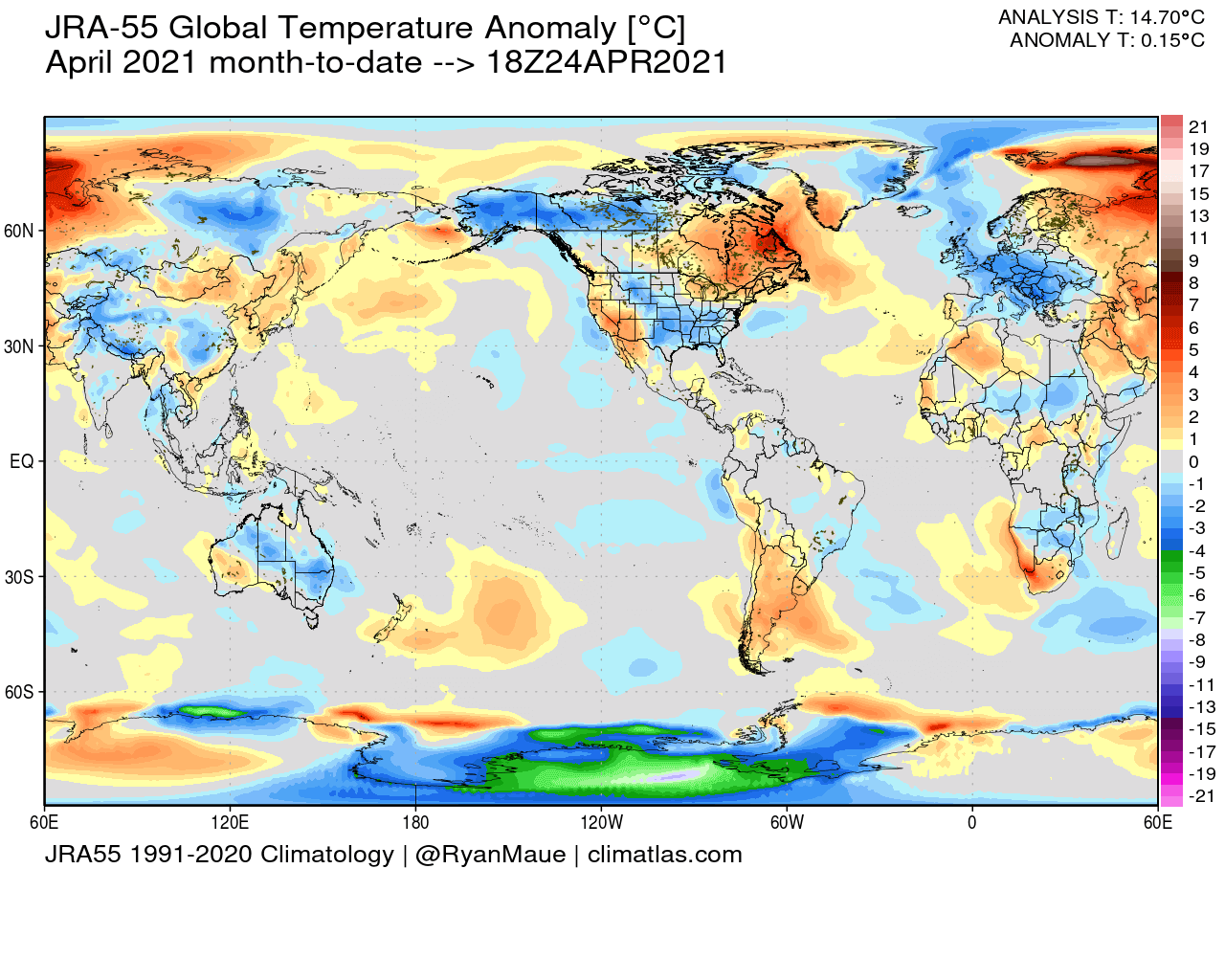 So far, 2021 is not really abnormally warm for this time of year. There are several areas across the world that stand out in cold anomalies. Siberia, Alaska, south-central United States, Europe, and Australia stand out with cold anomalies. On average the temperatures are still warmer than normal globally, but 2021 is perhaps starting surprisingly on the lower end of the past 10 years. 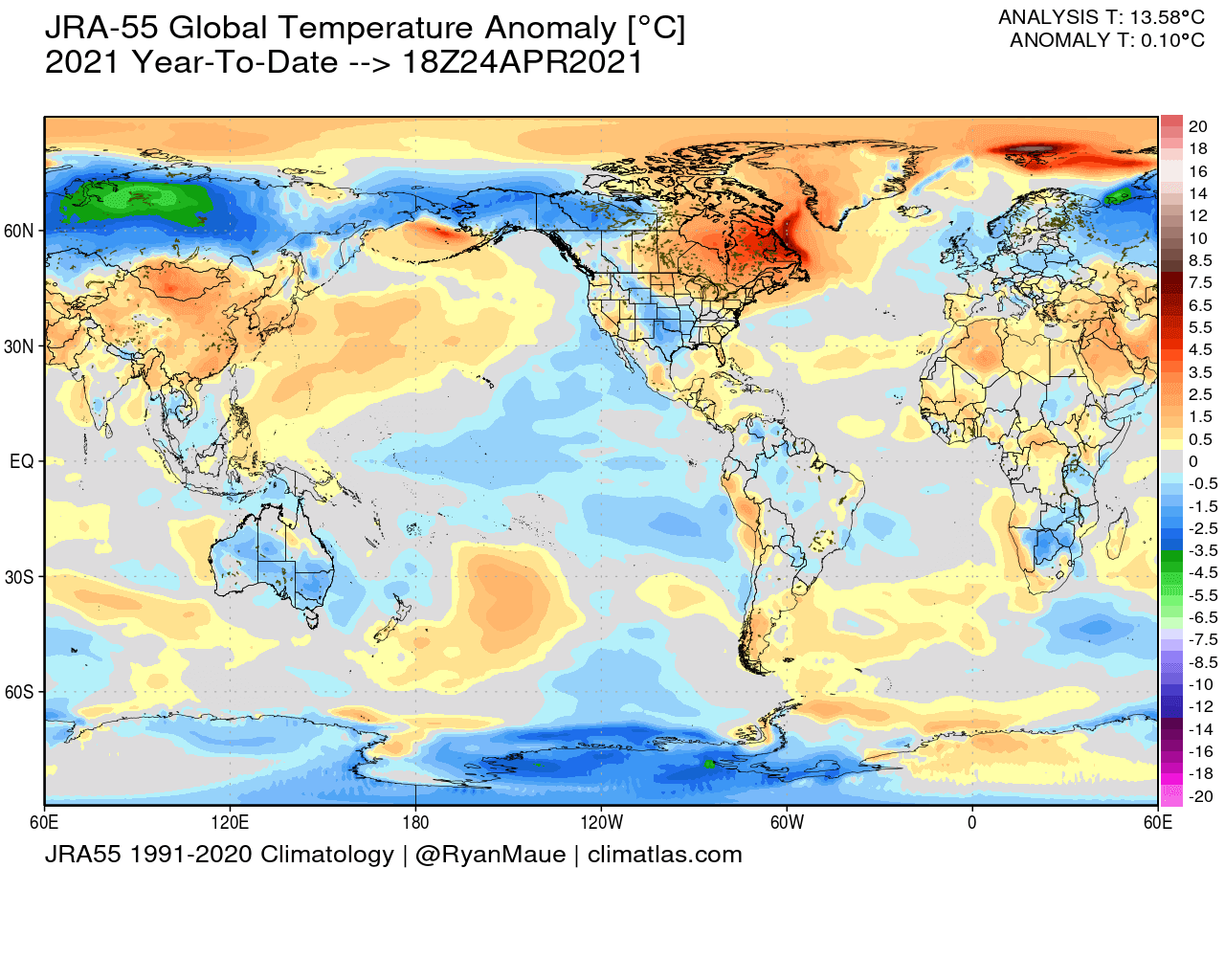 The graph below shows the global temperature anomaly from 2012 to 2021. You can see that so far, 2021 is starting off with the lowest global temperatures in the past 6-7 years. That is also partially due to the cold ENSO phase (La Nina) in the tropical Pacific ocean. 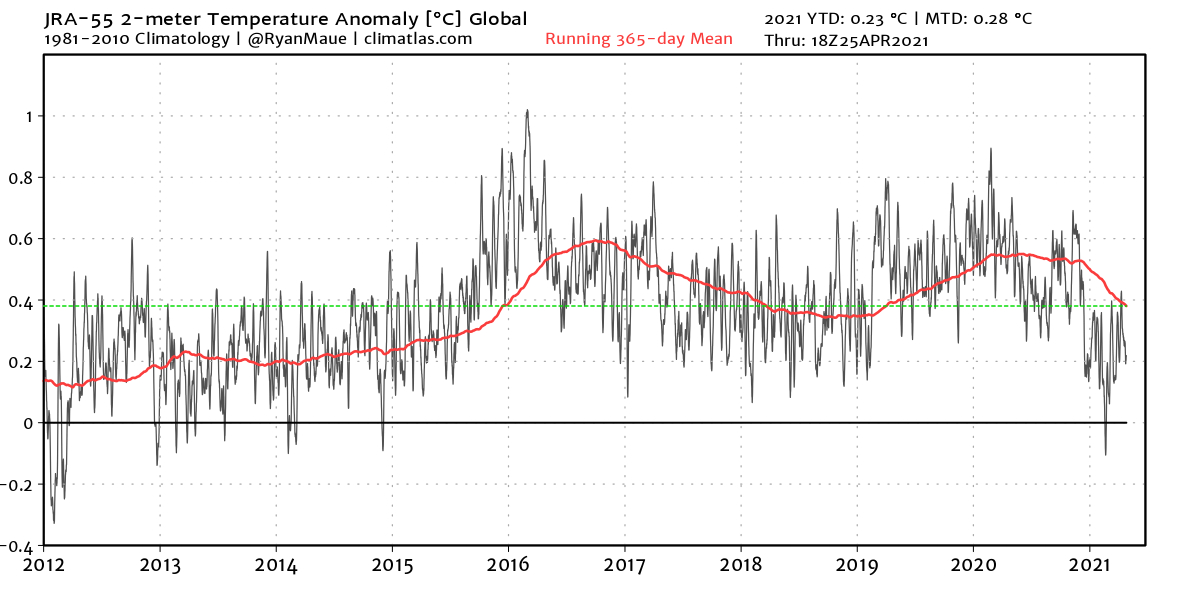 But will this trend continue for the rest of 2021? We will now check out what the latest summer trends are. For the Summer 2021 forecast, we decided to focus on the 3 main (or most used) seasonal models. The ECMWF and UKMO from Europe, and the CFSv2 from the United States. Graphics are from the Copernicus Climate EU project and the CPC/NCEP.

All these forecasts show an average picture over the course of 3 months (June-July-August) and reveal the general prevailing weather pattern forecast. This does not mean that such weather conditions would last for 3 months straight. It only shows/implies how the weather patterns might look 40-60% of the time.

Starting off with the ECMWF pressure pattern forecast below. You can see higher than normal pressure over the North Pacific. Also, much of the northern hemisphere is under higher pressure anomalies. That of course is not entirely realistic and is partially a product of the long lead time of the forecast. 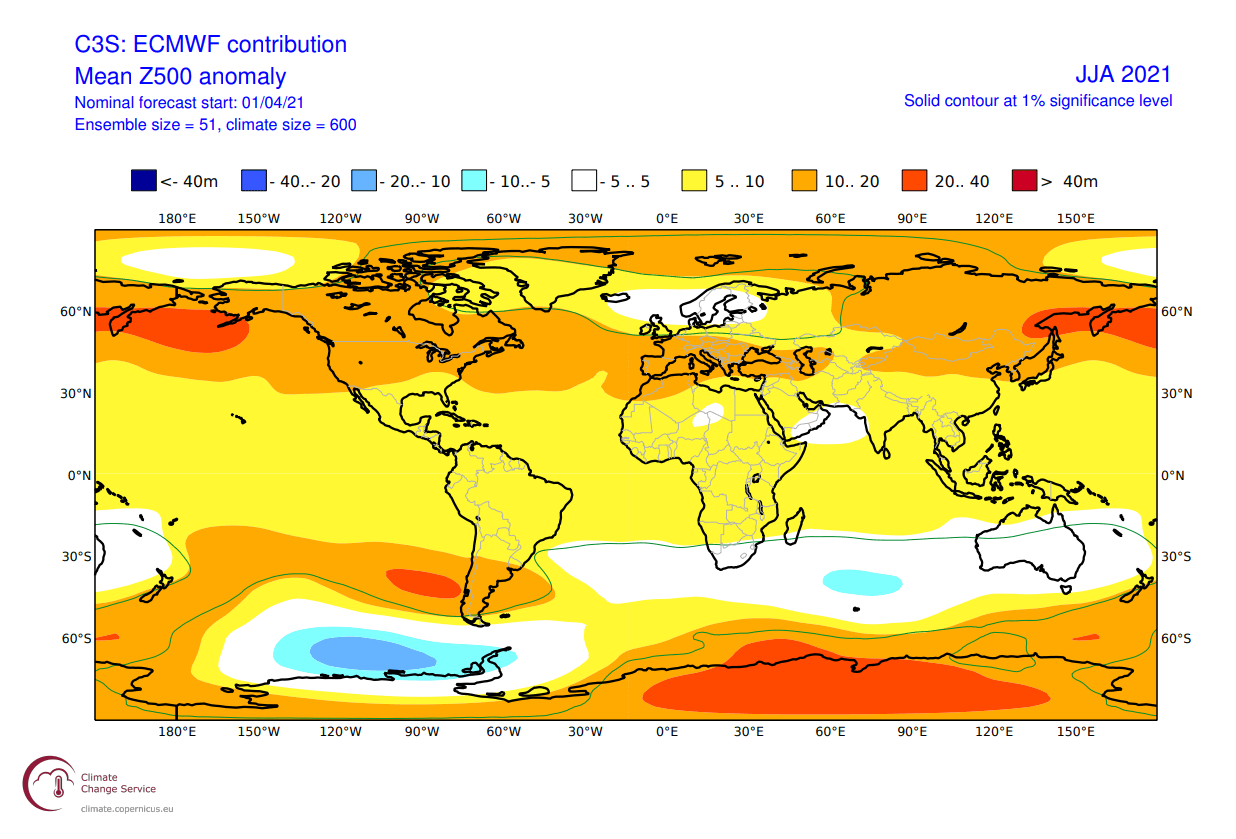 Global air mass temperature forecast from ECMWF reveals something interesting. Of course, we see neutral Northern Europe, under the low-pressure region and warmer towards the south. But notice the warmer than normal northwestern United States and southwestern Canada. That could imply a lower pressure area in the eastern North Pacific, near the west coast of the United States. 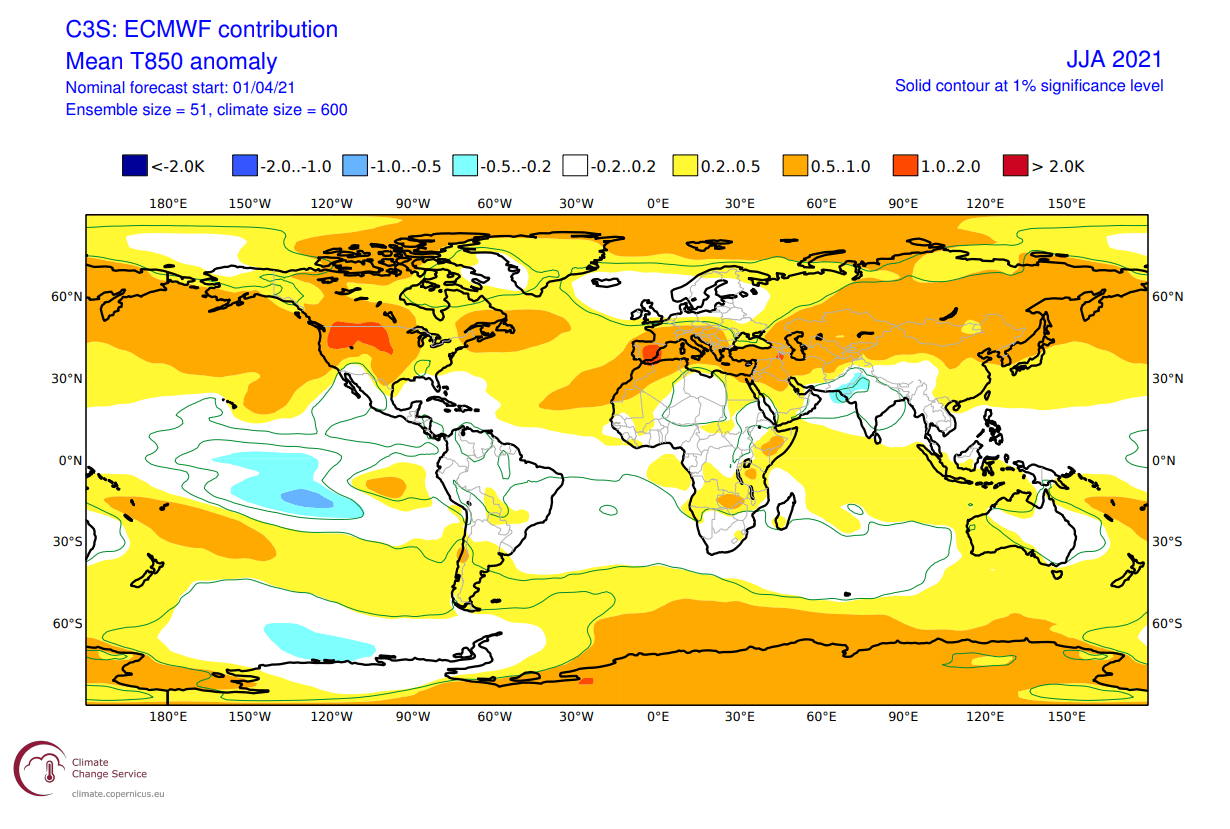 Looking closer at surface temperatures, first over Europe. We can see much of southern and south-central Europe being warmer than normal. This is due to the expanding higher pressure area from the south. Northern Europe and Scandinavia are closer to average temperature. These conditions imply that strong summer heatwaves are possible, perhaps lasting longer than normal, and with higher temperatures. 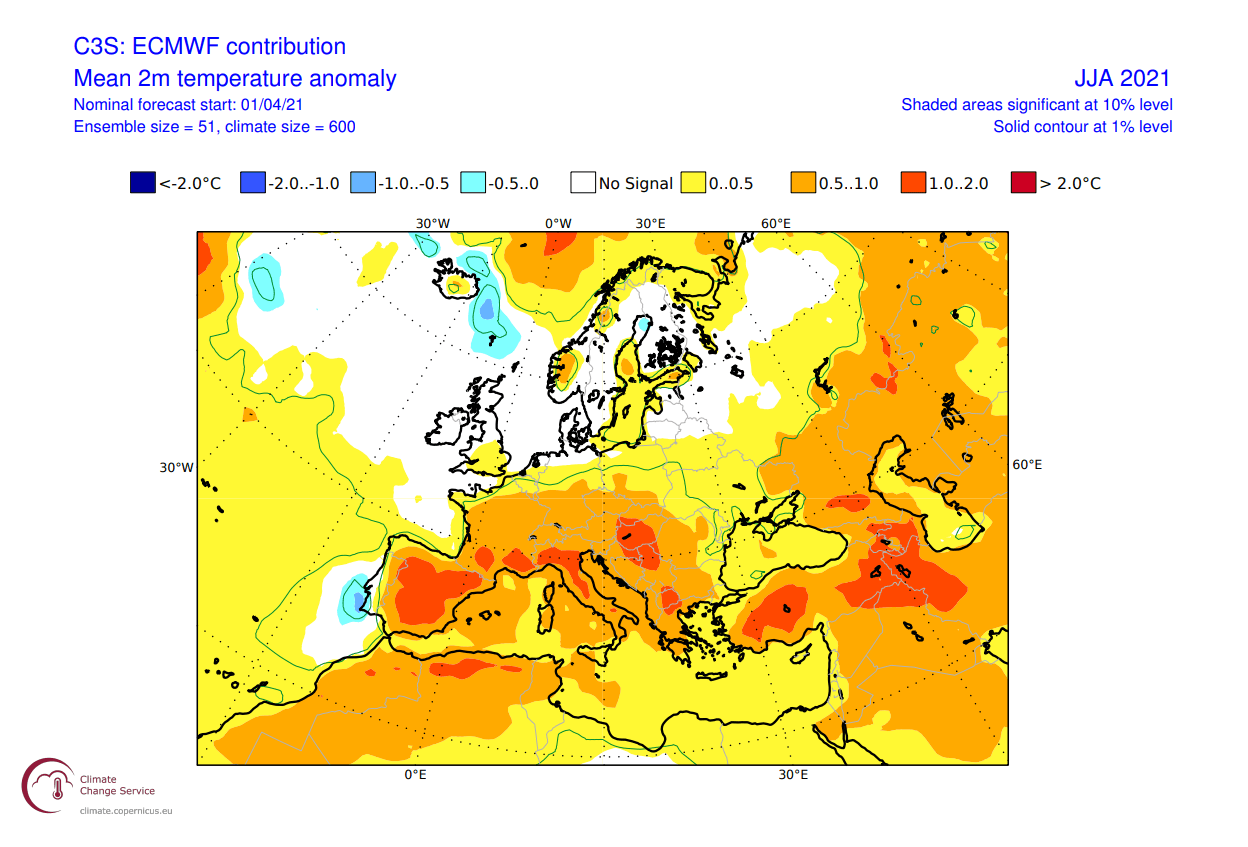 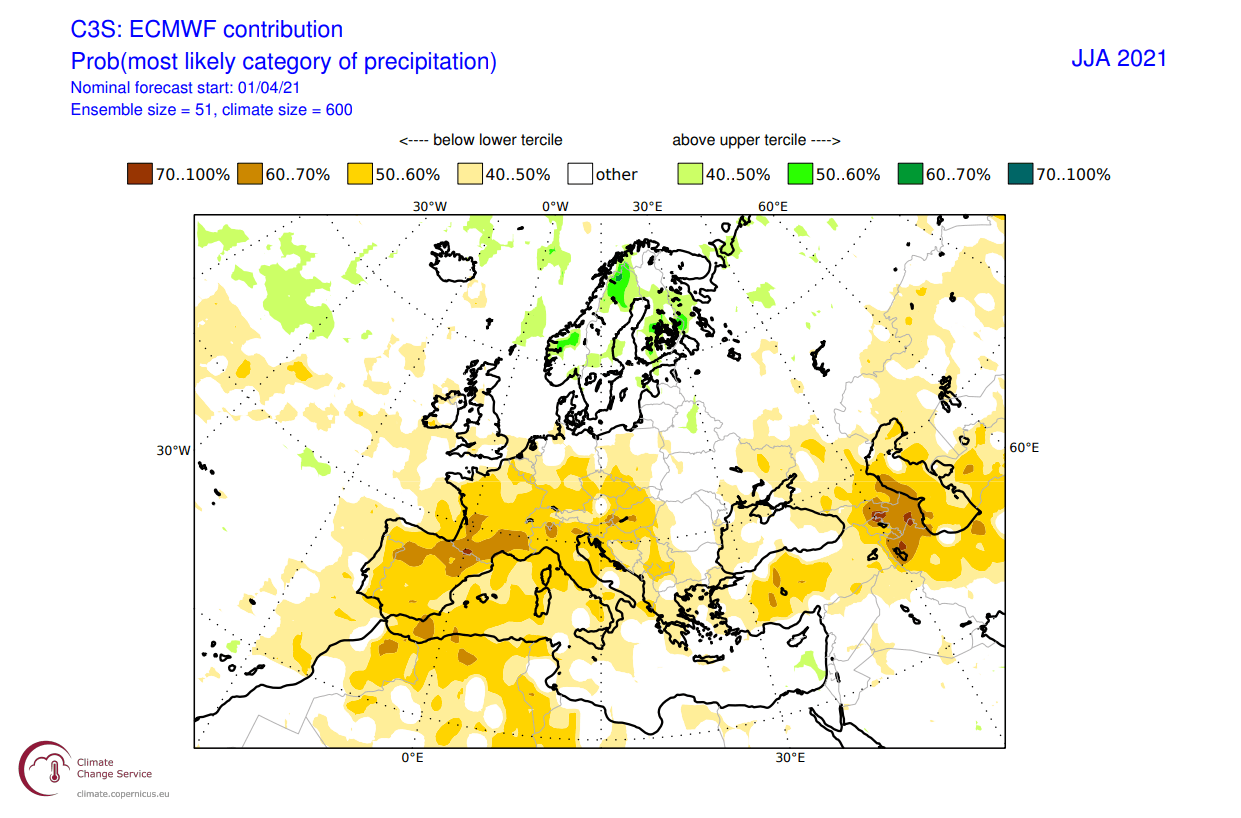 Some negative temperature anomalies are shown along the west coast, due to the colder than normal ocean temperatures in the eastern North Pacific. 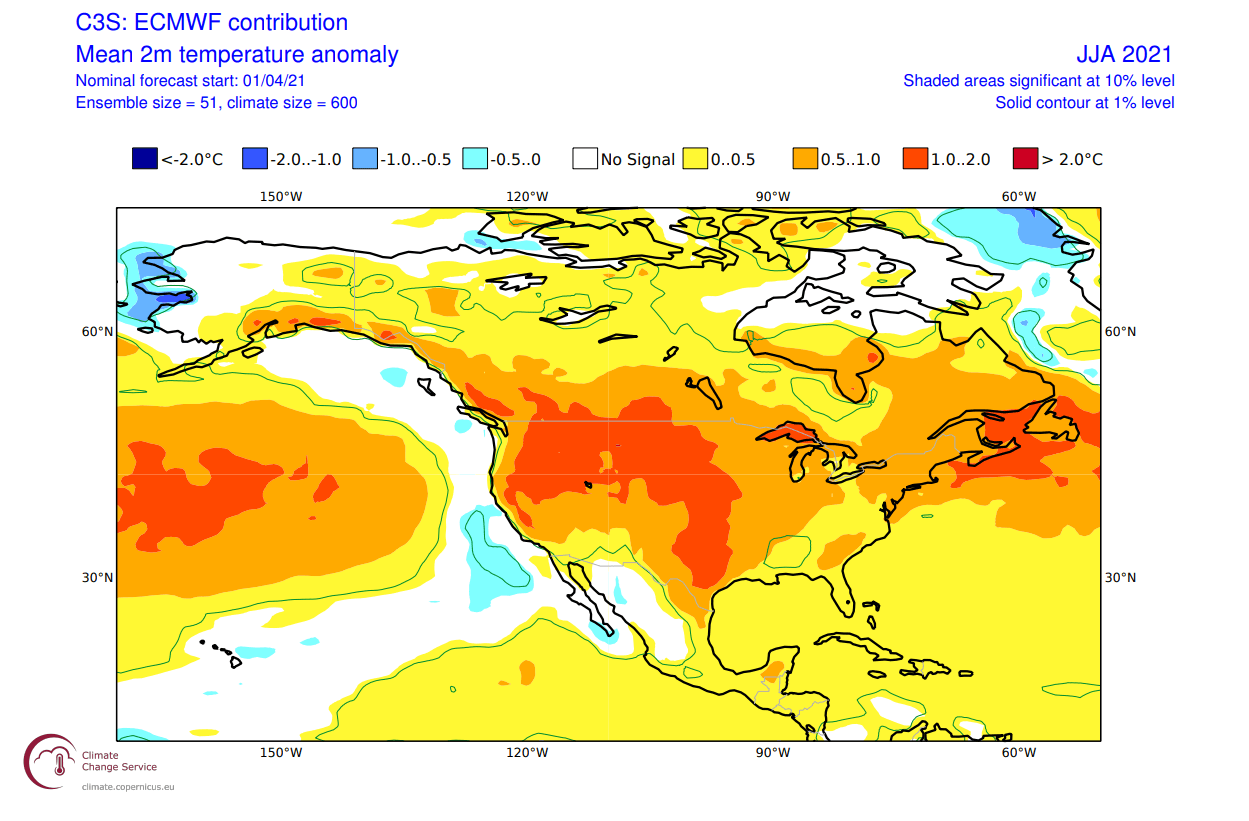 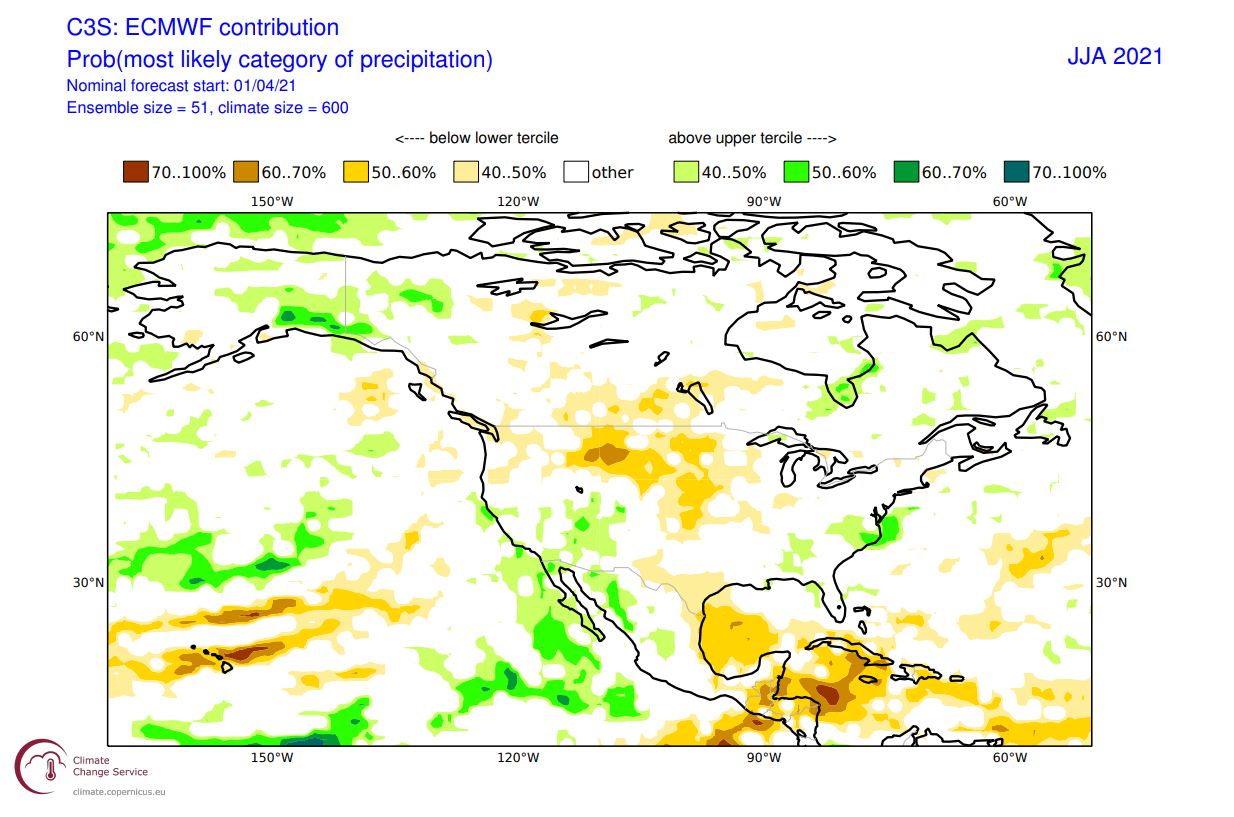 Studies done in past decades implied that there might be a connection between precipitation amounts in winter and in summer over the southwestern United States. 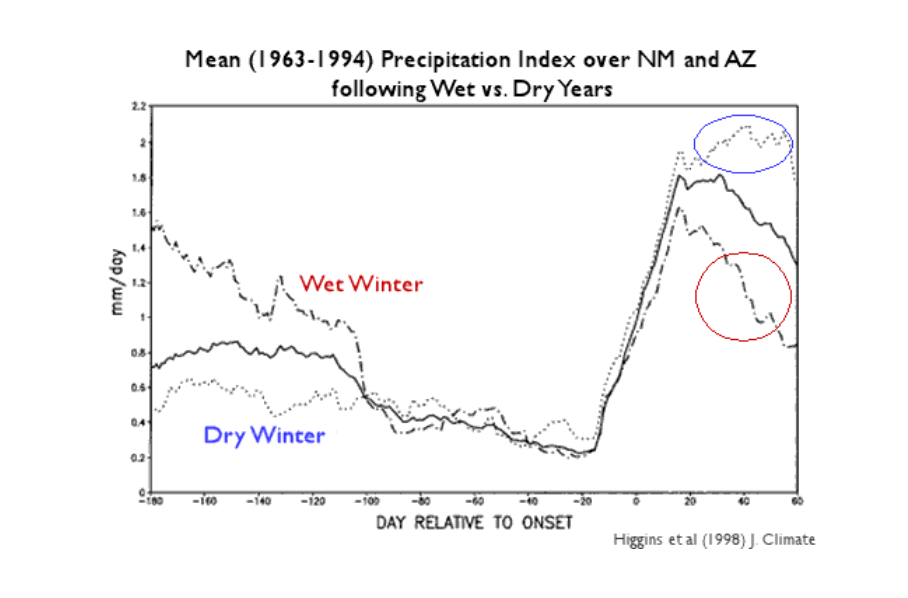 The image below shows the current drought conditions across the United States. You can see exceptional drought conditions prevailing over the southwestern United States, following a dry winter season. This would imply, based on the historic data above, that the summer monsoon might be stronger than normal, which is exactly what the ECMWF rainfall forecast suggests. 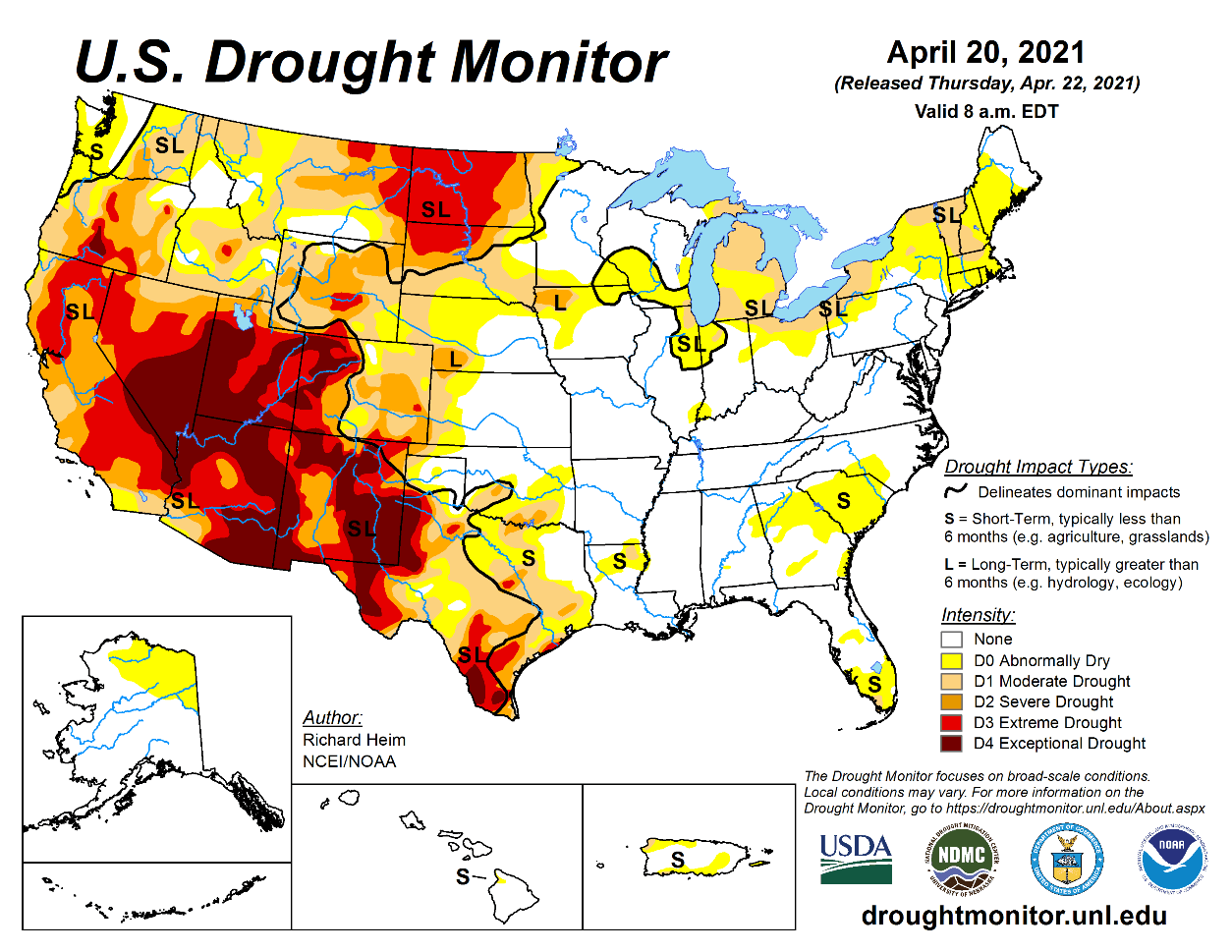 Our second model of choice is the UKMO model, from the United Kingdom Met-Office. This has also been a good performer over the past seasons, so we include it in our standard “suite” of model forecasts. 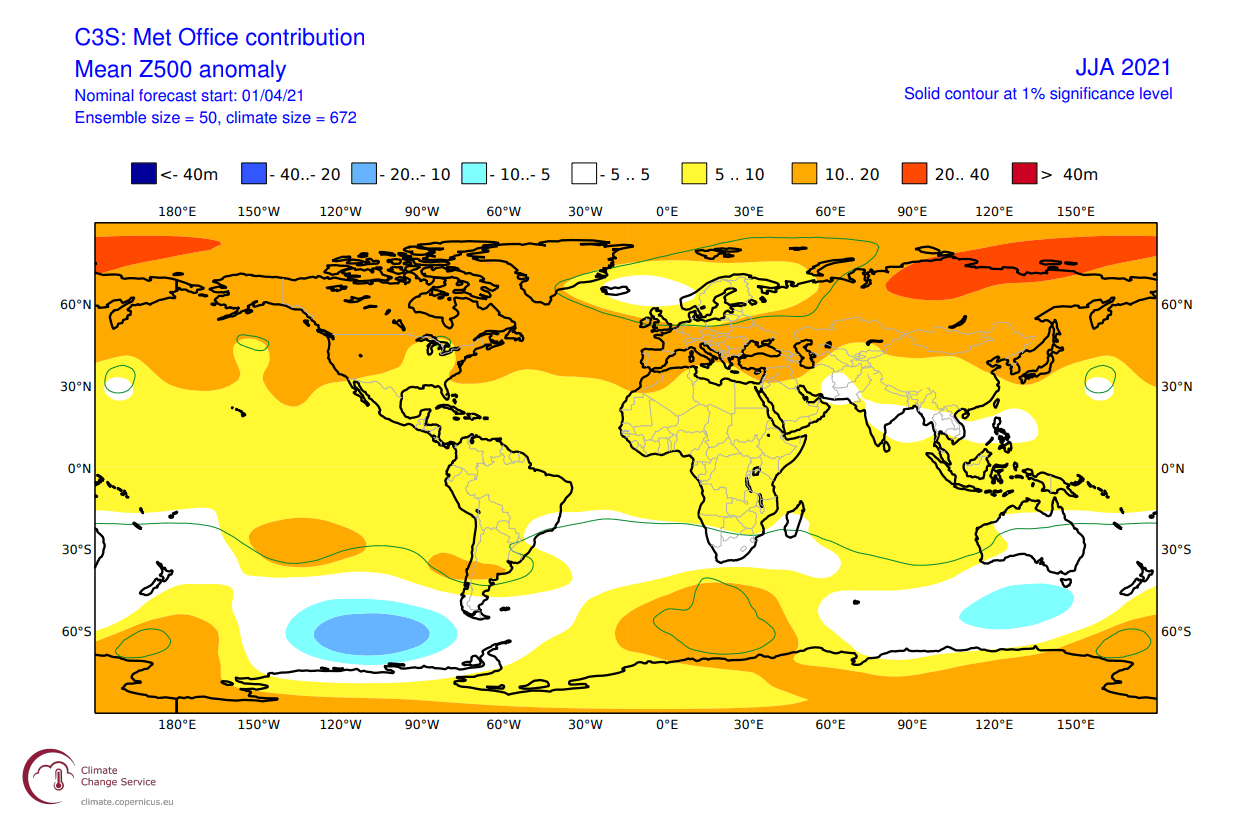 The air mass temperature anomalies follow this pattern, and so we have a zone of much warmer temperatures over Siberia. We see warmer air mass over southern and central Europe, and over parts of the northern United States. 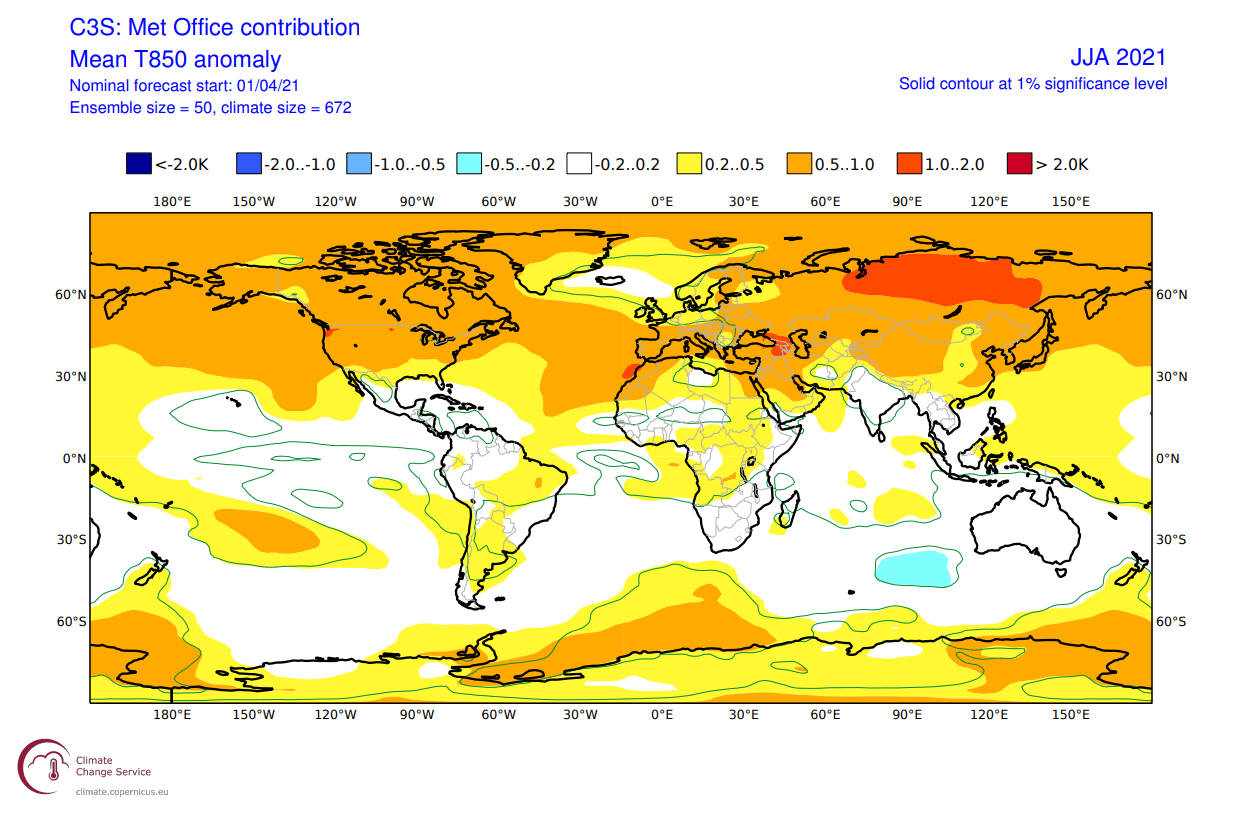 That is because the UKMO model has pulled the low-pressure zone further back over northwestern Europe. Such positioning enables warmer southerly flow into Scandinavia. 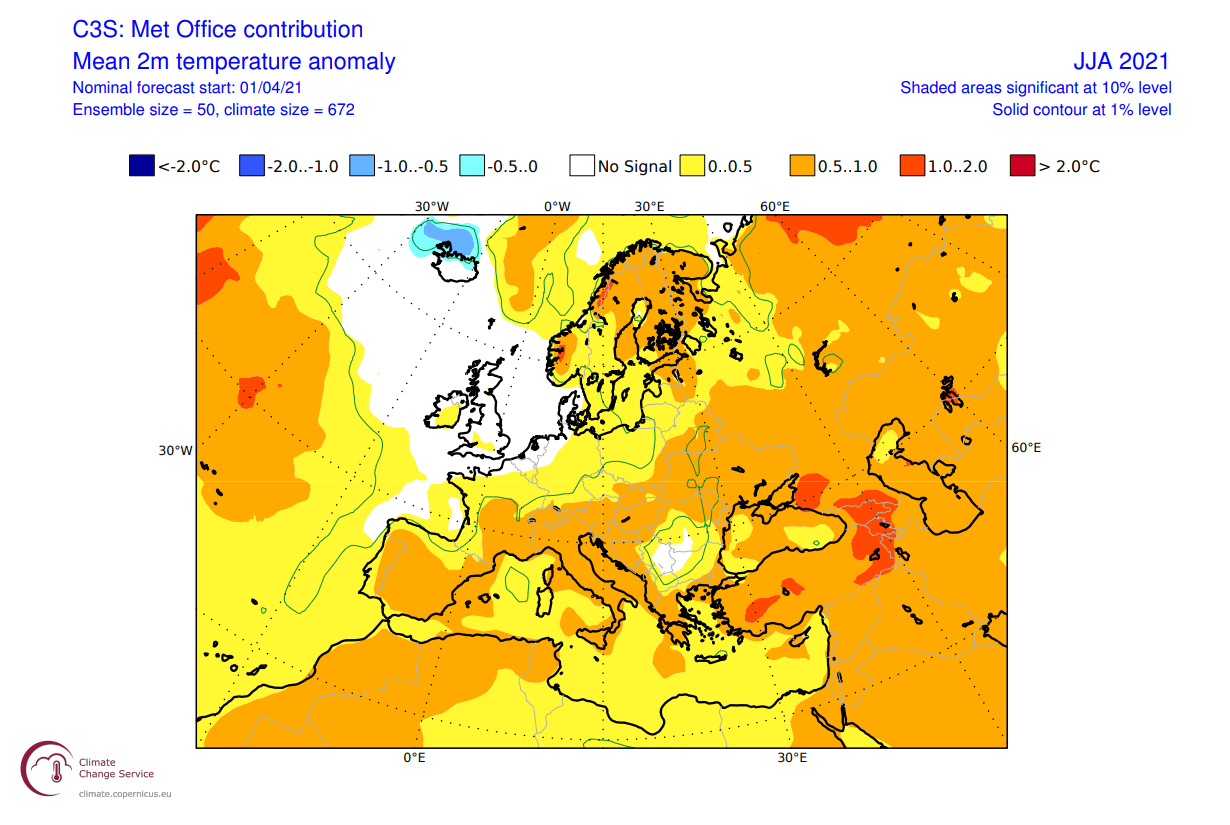 The rainfall forecast supports that idea, as we can see wetter conditions over Scandinavia, implying a warm and moist southerly flow. Normal conditions prevail over the British Isles, while we can see drier summer conditions over western Europe. The drought conditions are not as strong as in the ECMWF forecast, likely due to the less amplified high-pressure zone extending from the south. But both models agree on drier and warmer than normal conditions in Spain and France. 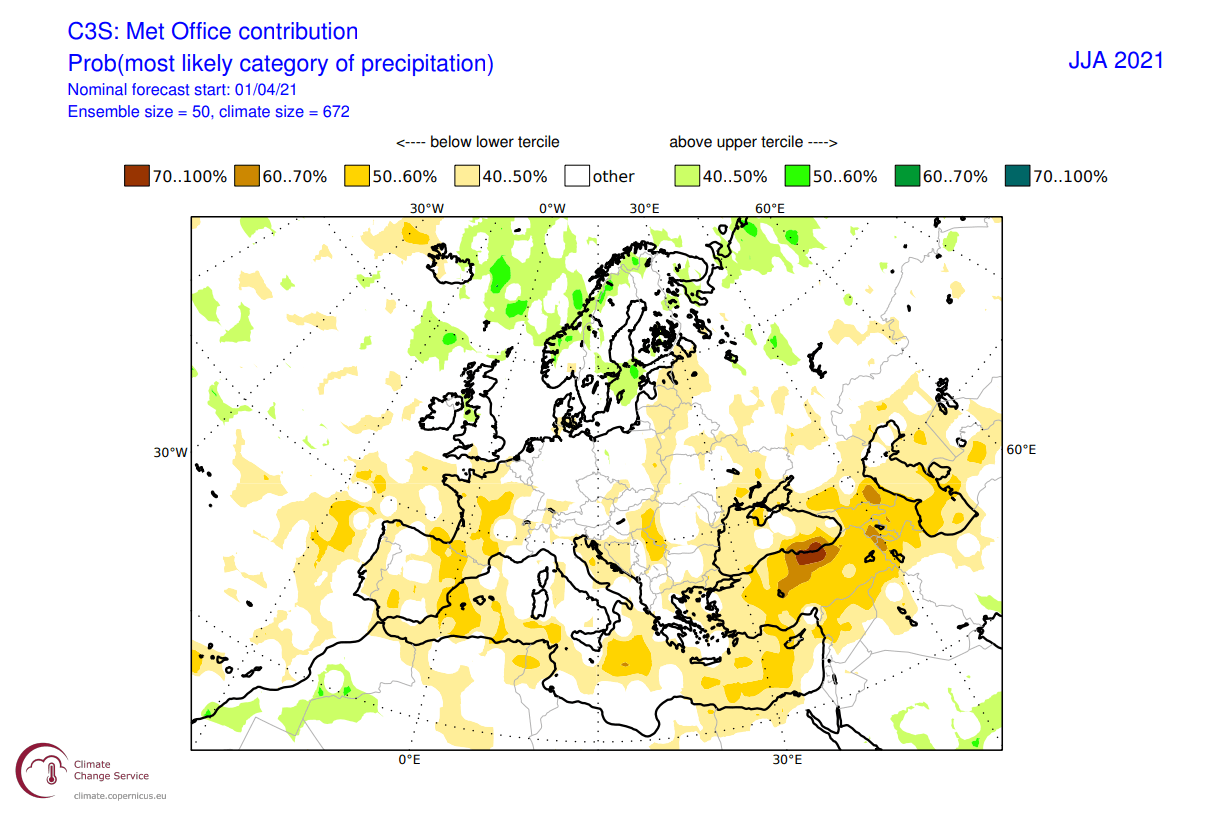 The UKMO summer temperature forecast is quite uneventful over North America, as it has most of the continent under warmer than normal conditions. Stronger warmer anomalies are indicated over the midwestern United States. Canada is also shown with mostly above-average temperatures. In reality that is less likely, with more variation possible, like in the ECMWF forecast.

Here we can also see the negative anomalies along the west coast, as the water temperatures remain colder than normal. 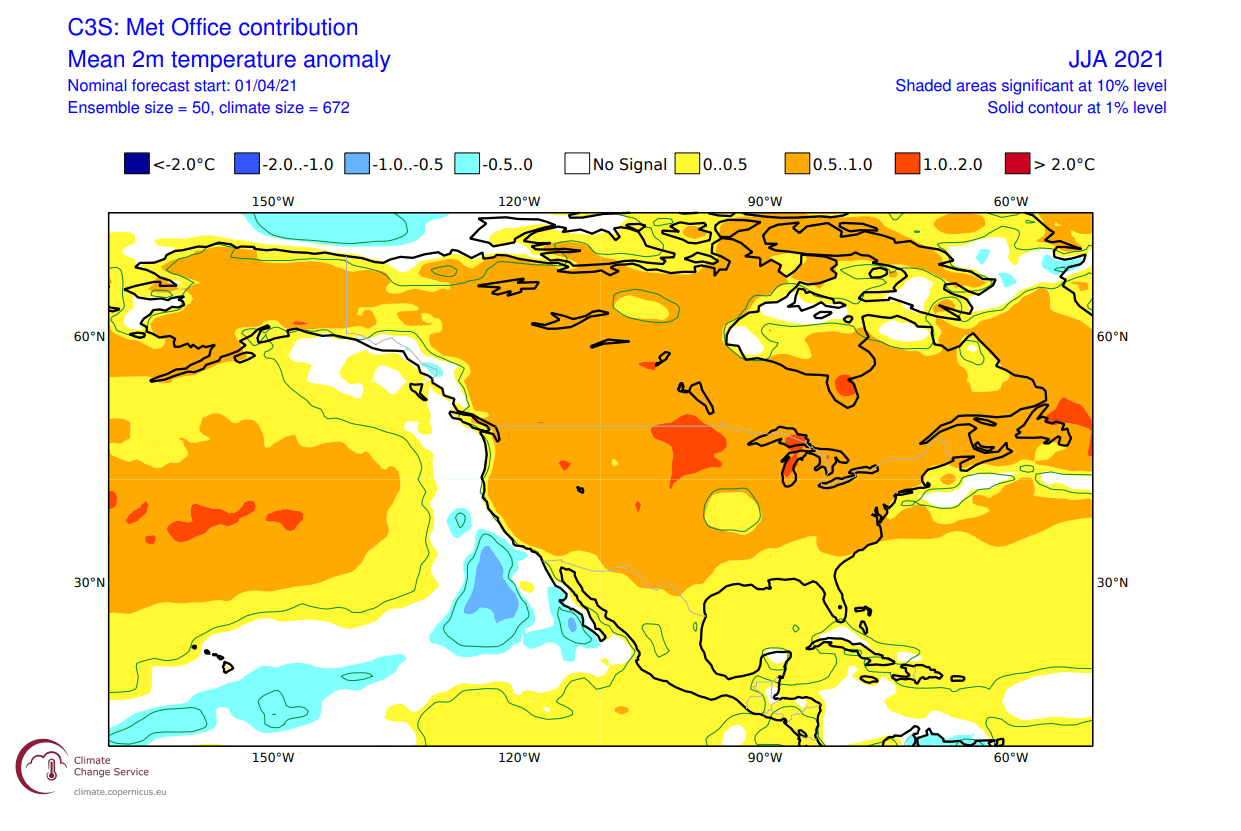 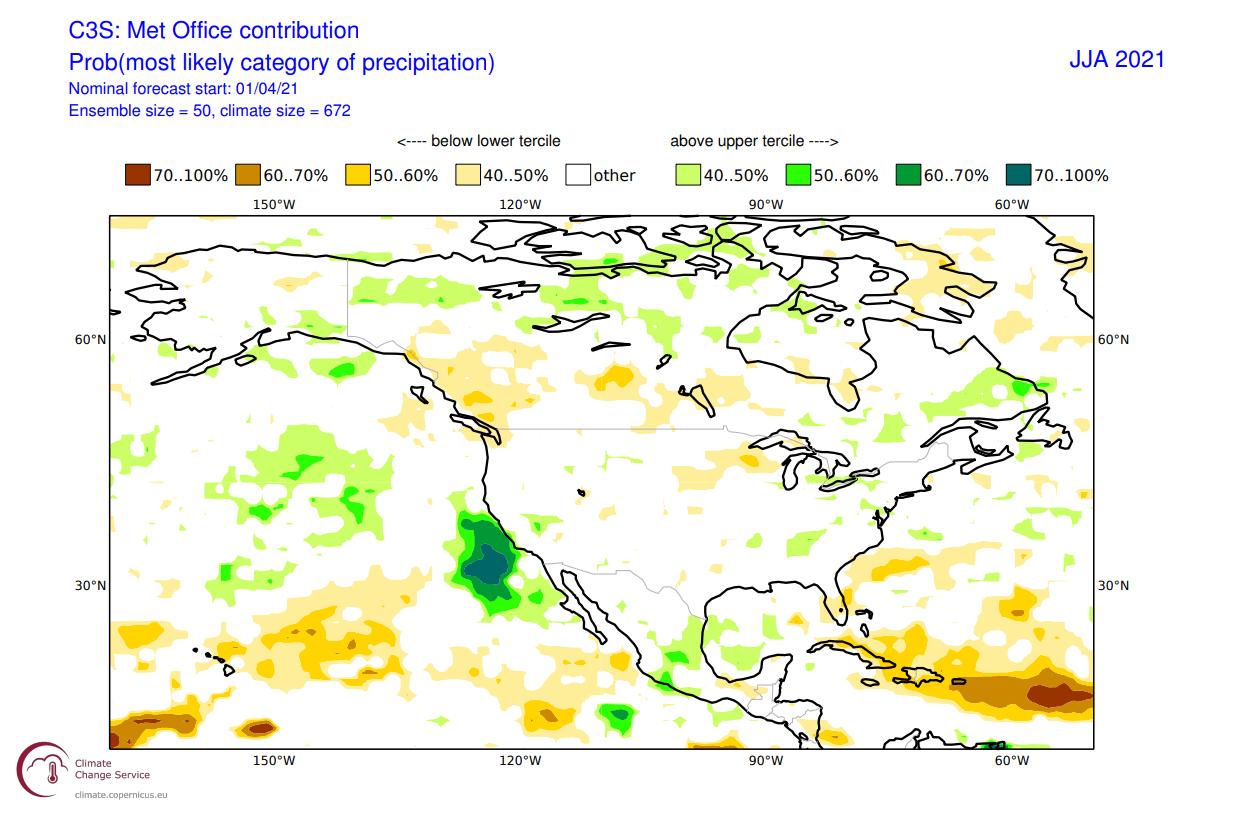 As a counterbalance, we decided to always use the main North American long-range weather model, the CFS version 2 from the NOAA/NCEP in the United States. It is usually less reliable than the UKMO and especially the ECMWF, but it offers another perspective on the long-range trends. 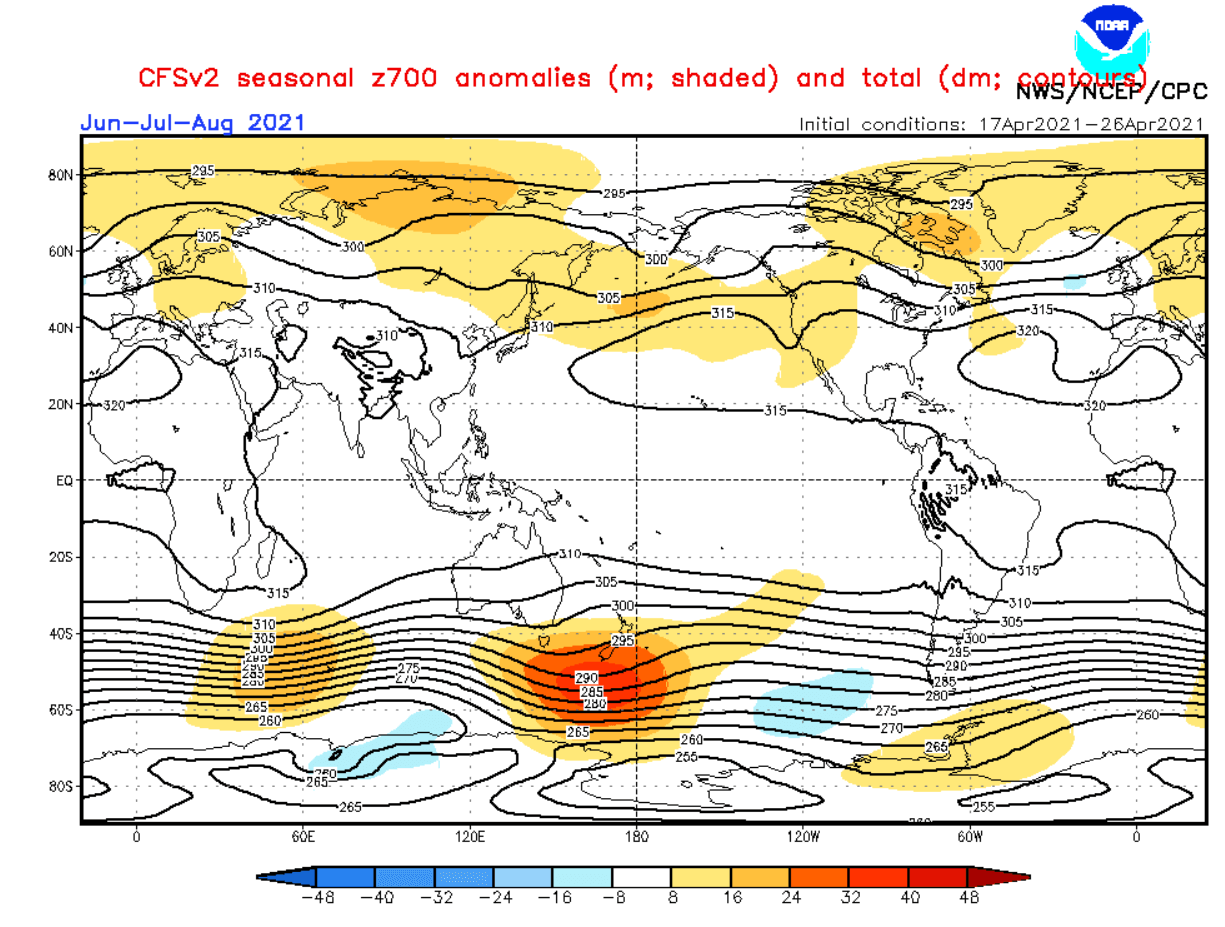 Looking at the air mass temperature anomaly forecast, it shows quite a blowtorch across the Arctic Circle. It also suggests much warmer conditions over Siberia and a warmer than normal zone over Europe and the northwestern United States. 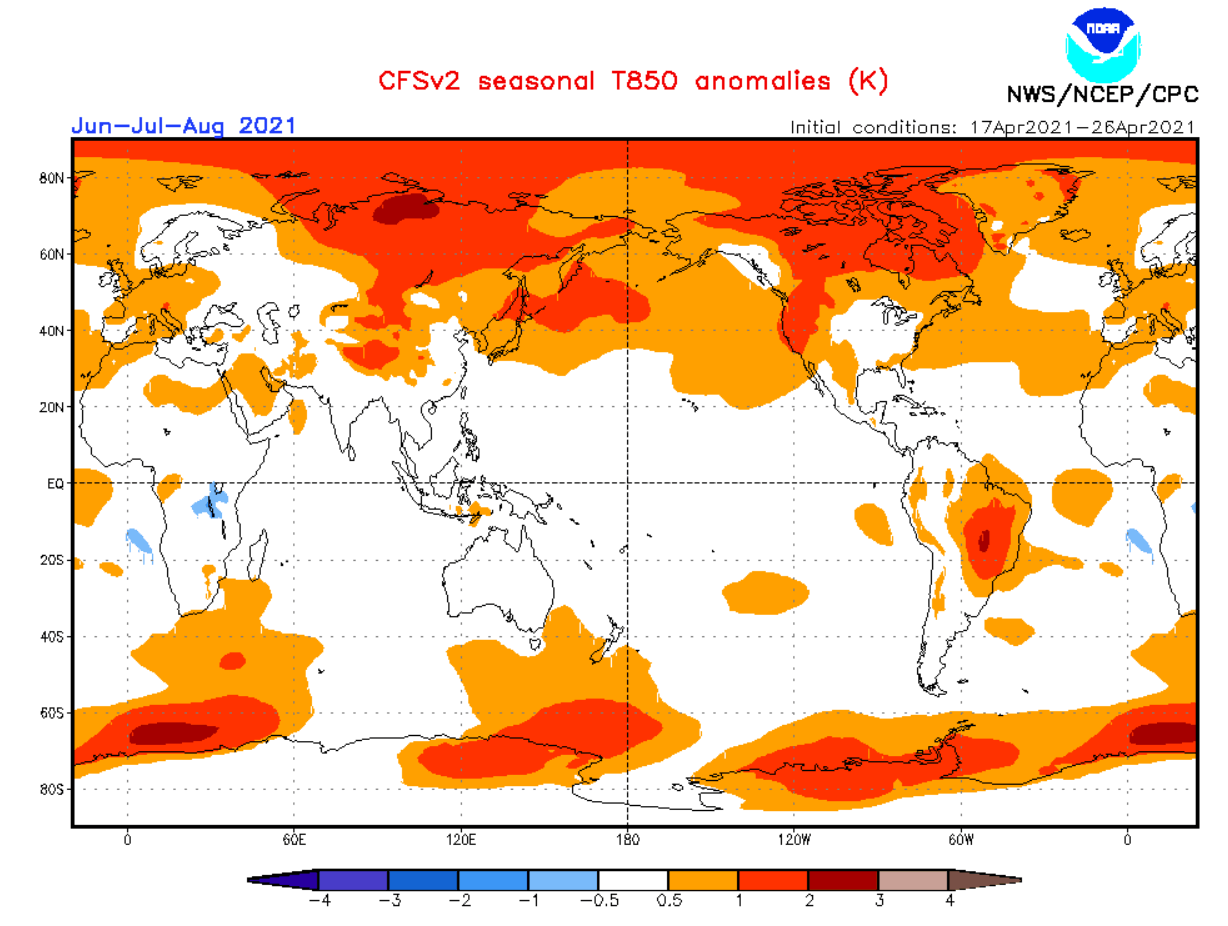 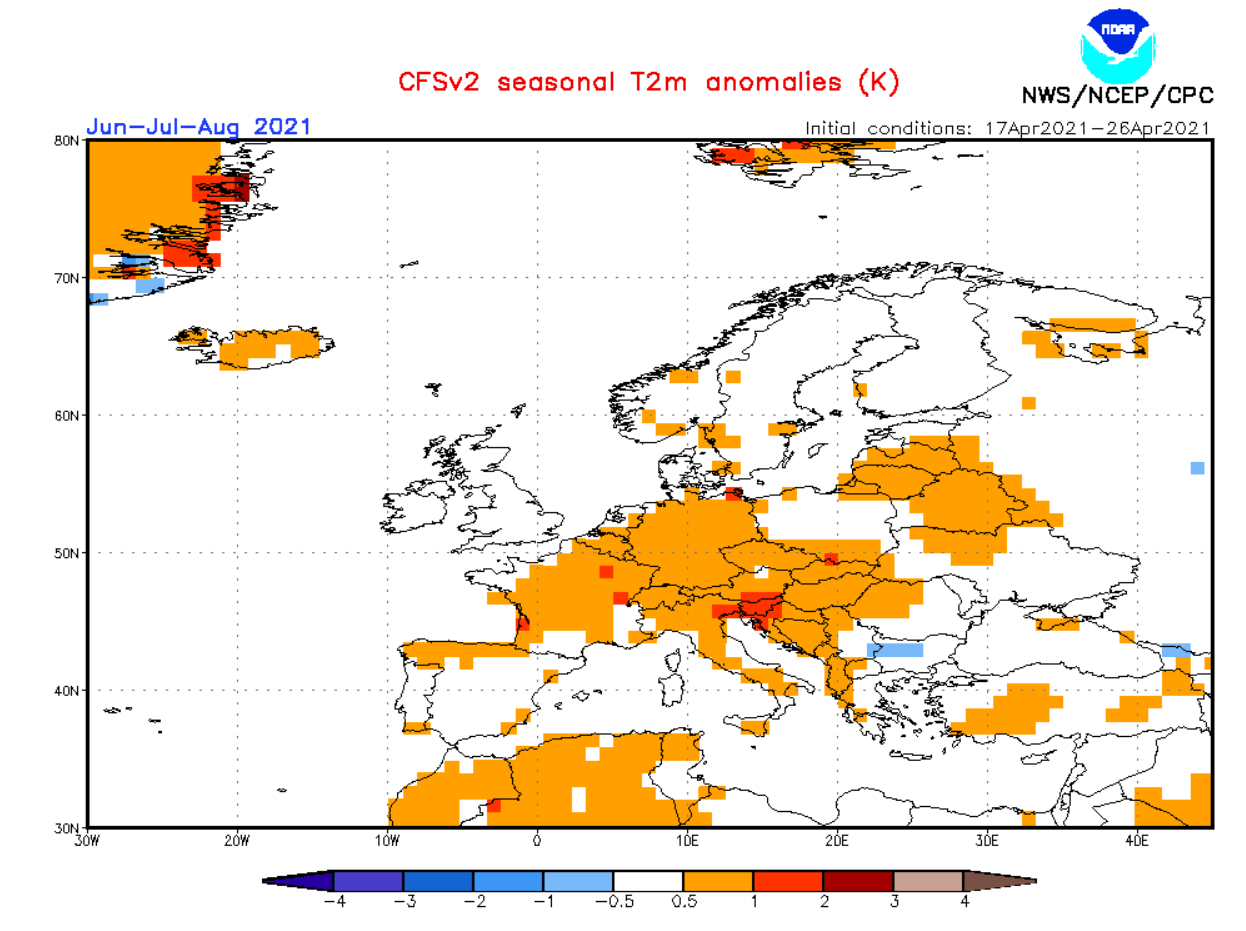 There is quite a difference between the CFS and the previous two European models when it comes to rainfall. Here we actually see wetter than normal conditions over western Europe. That is mostly because the CFS has pulled the lower pressure zone further back into the North Atlantic, enabling the warmer but moist flow into western Europe. 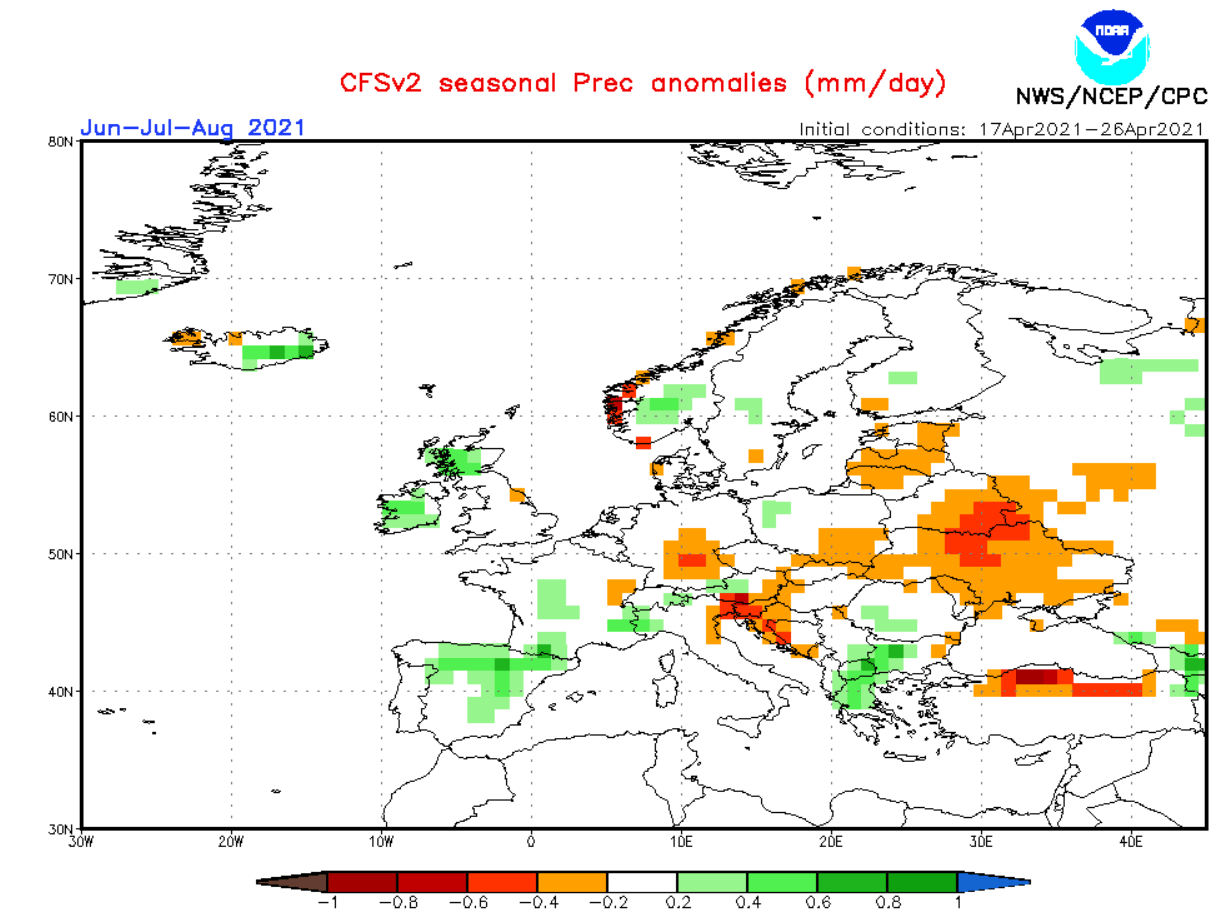 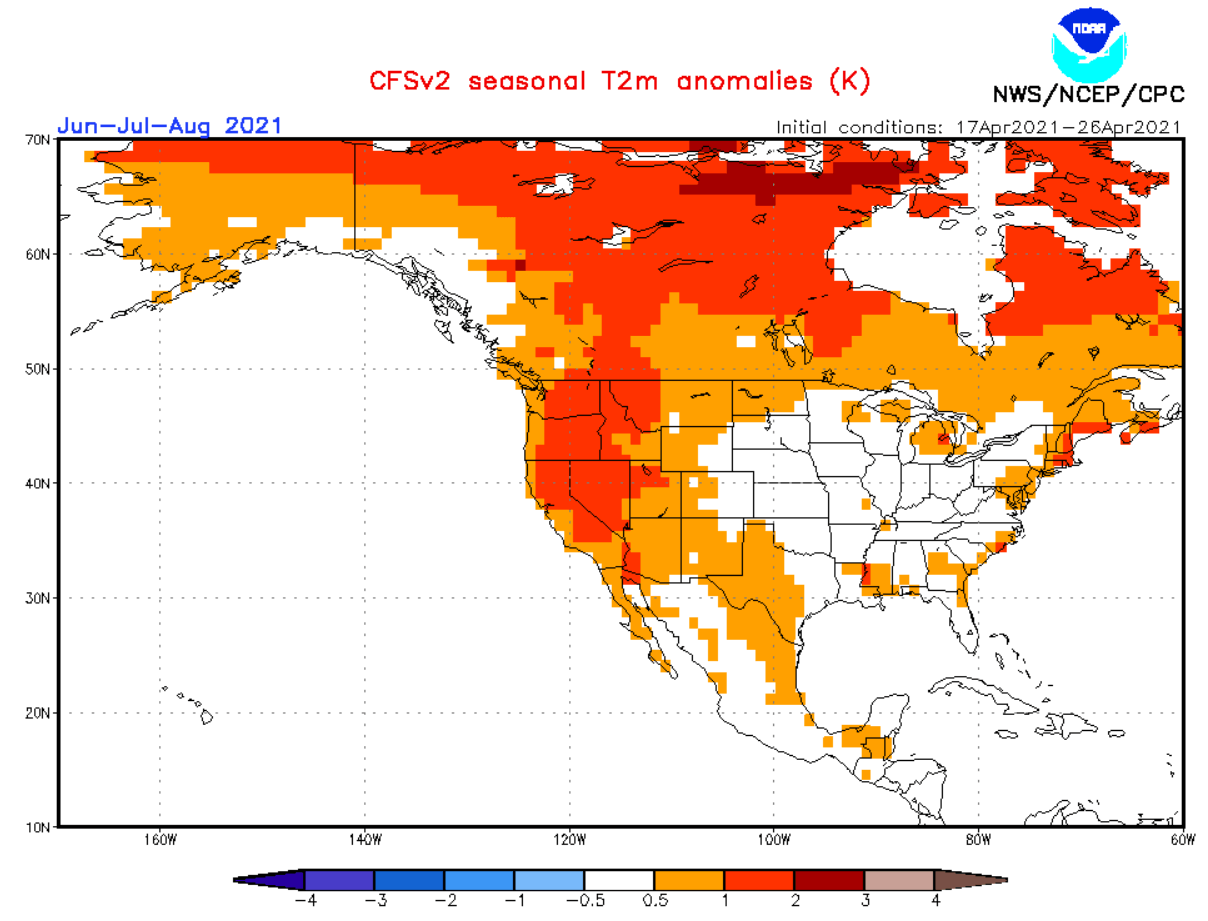 Wetter than normal conditions over central and eastern United States coincide with the neutral temperature anomalies in this region. This implies more unsettled weather, with above-average thunderstorm frequency. Much drier conditions prevail over the northwestern United States and southwestern Canada. There are no direct signs of a stronger than normal southwestern summer Monsoon. 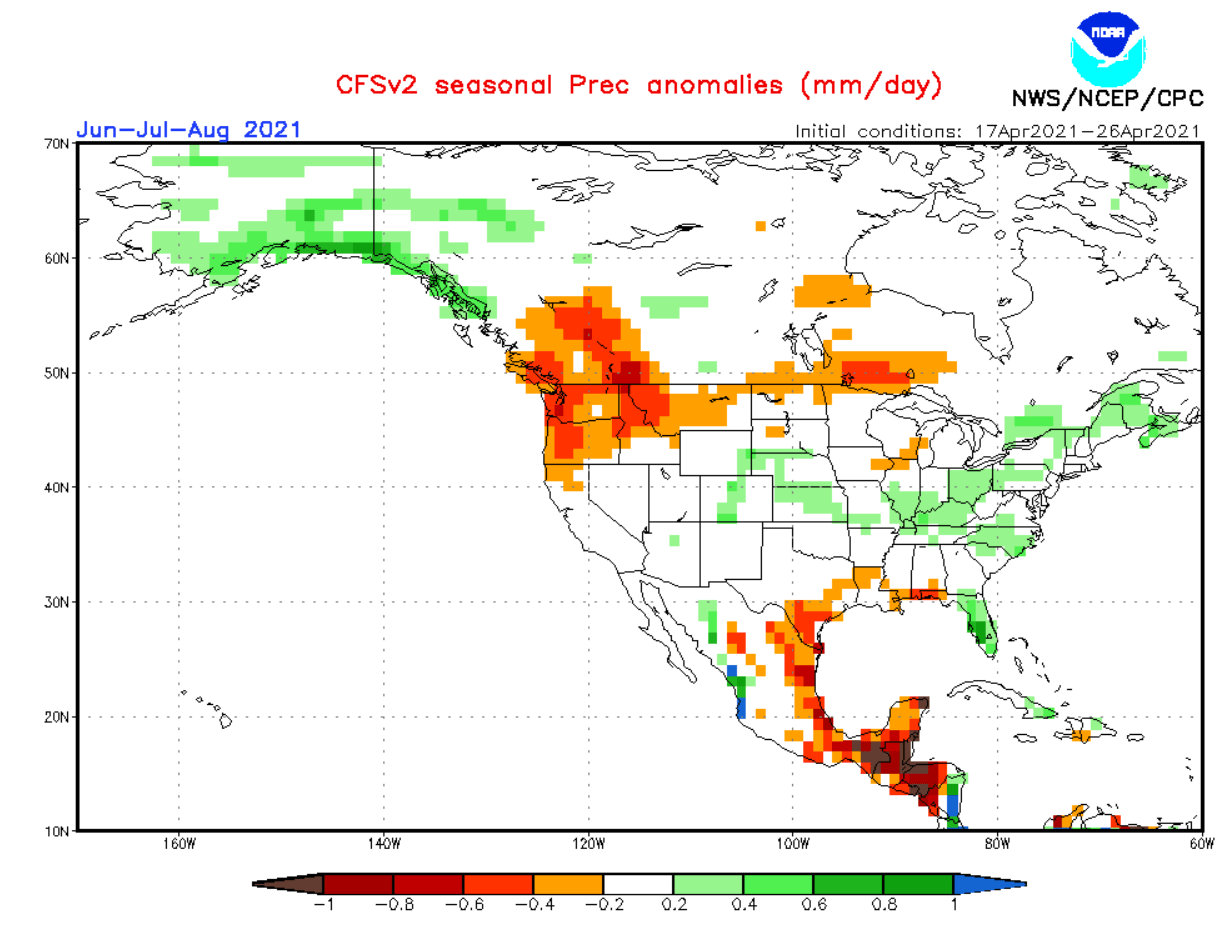 There is a general agreement between the models, that a low-pressure zone develops somewhere over northwestern and northern Europe. High than normal pressure will prevail over the northern United States and southern Canada, controlling the weather patterns over North America.

In Europe, mostly warmer than normal conditions are expected across much of central and southern Europe. Normal conditions are expected over the British Isles, but here the weather development strongly depends on the positioning of the low-pressure zone over northern Europe. Scandinavia is also dependant on the low-pressure zone. Its positioning means a difference between cooler westerly to northwesterly flow or a warm and moist southwesterly flow.

Stronger summer monsoon conditions are likely over the southwestern United States, which would come as a relief to exceptional drought conditions currently ongoing in the region.

An important piece of the summer weather puzzle is the Arctic sea ice. This is the peak of the Arctic sea ice melt season and can have implications for the weather development into Autumn. The ECMWF temperature anomaly forecast shows above-normal temperatures over the arctic ocean. Much warmer conditions are present on the North Atlantic ocean side of the Arctic. 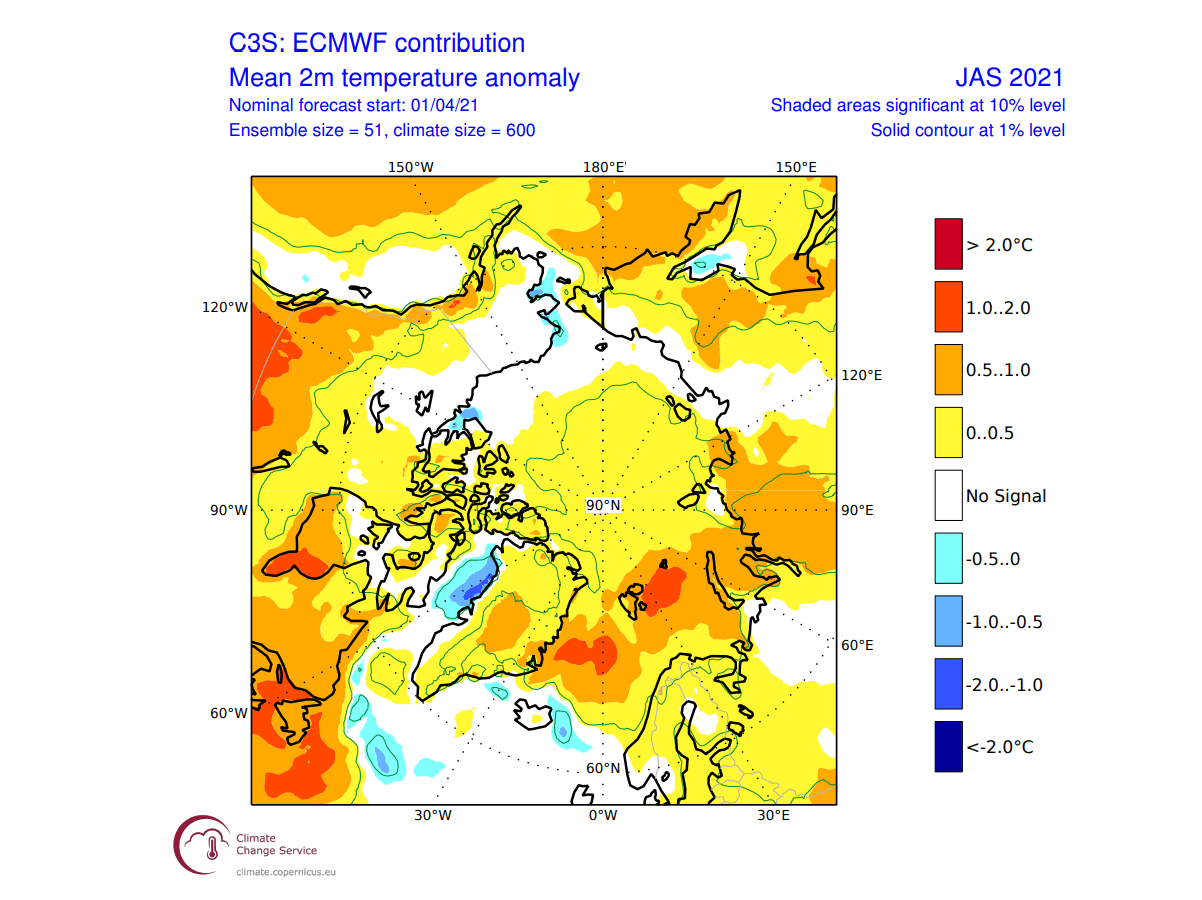 Below you can see the CFS forecast of the Arctic sea ice concentration in September. We tend to focus on September, as it is the month when the sea ice area is at its lowest point. This forecast shows a very small sea ice area, which would be a certain record. The lowest value so far was reached in September 2012, at just 3.4 million km².

Looking at the Arctic sea ice extent graph, it is quite shocking to see such a forecast. The model predicts the peak of the melt season well below 4 million km², nearing 2 million km². This would be an ultimate record, not far away from the “Blue Ocean event“, which means that the Arctic is nearly ice-free, with less than 1 million km² of sea ice left. But this model has a known history of overly pessimistic Arctic sea ice forecasts.

We will keep you updated on the global weather activity and weather trends, so make sure to bookmark our page. Also, if you have seen this article in the Google App (Discover) feed, click the like (♥) button to see more of our forecasts and our latest articles on weather and nature in general.