While Europe is currently still under the effects of a strong north Atlantic ridge and an Arctic outbreak across the Balkan peninsula and Mediterranean, model trends indicate this pattern should persist for another week. Meanwhile, cold weather will also spread towards the Iberian peninsula and the western Mediterranean. Te upper ridge moves into the Arctic region and allows colder weather also for the western Europe which is currently under the effects of unusually warm weather (excluding lowlands trapped under a strong thermal inversion).

If we take a look at stratosphere maps, a quite impressive and textbook Polar Vortex split is present this weekend. Notice the strong ridge over the Arctic region, centered over Alaska and Russia. Two well-defined vortices can be seen – one over the eastern Canada and another, larger one, over Europe. 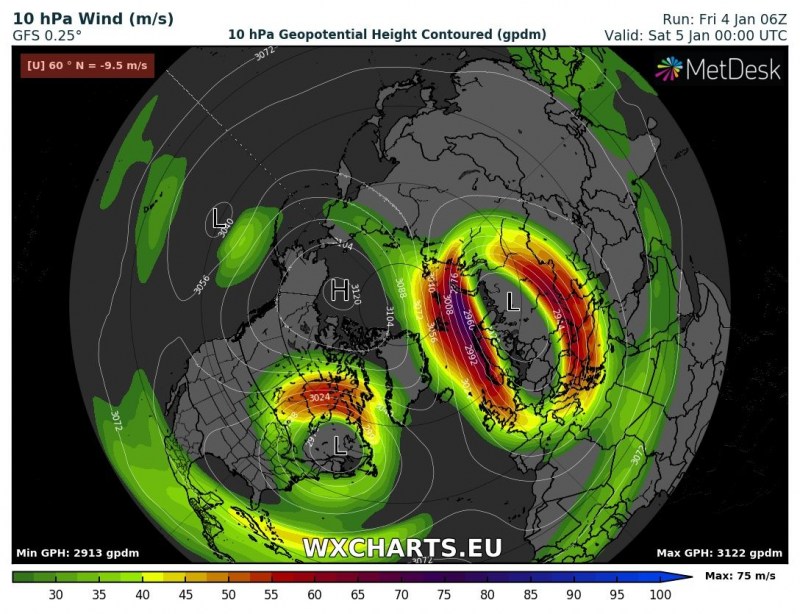 Looking several days ahead towards mid next week, we can see the ridge remains in nearly the same position while the vortex over Europe expands, while the Canadian one weakens. In short this means mid-latitudes are in for a long period of more dynamic winter weather, extending up to several weeks once the effects fully propagate into the troposphere. 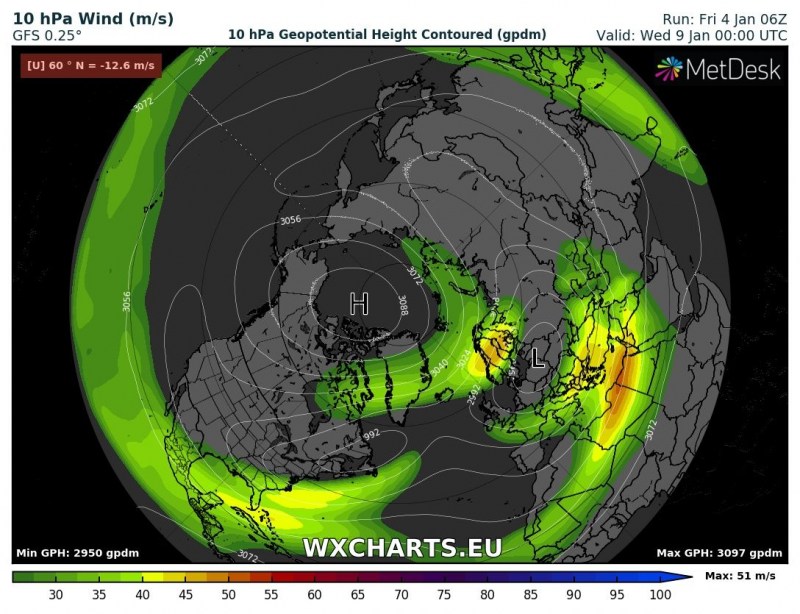 Temperature anomaly map analysis in the stratosphere indicates both vortices with colder temperatures over Europe and North America, while still very significant (more than 50 °C above normal) temperature (ridge) remains over Russia. Overall, a strong ridge dominates the Arctic region while remnants of the main Polar Vortex have been pushed into mid-latitudes. 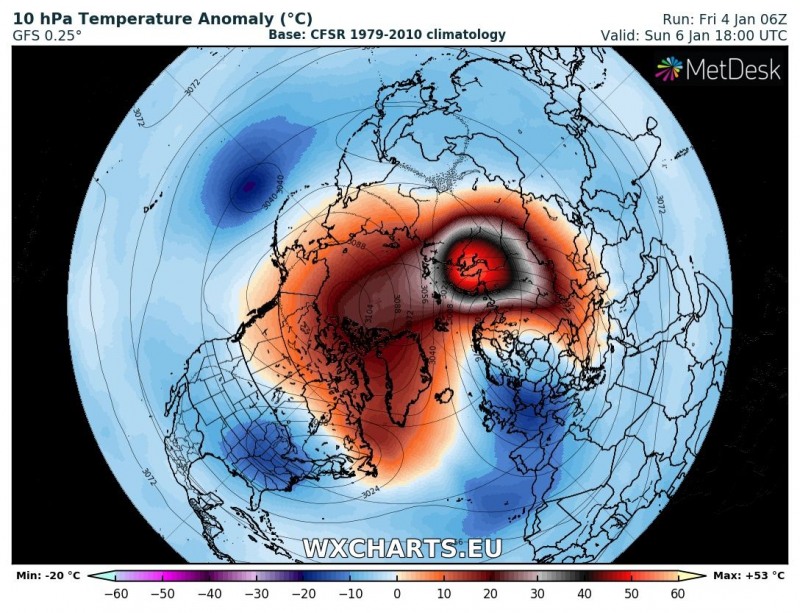 To understand the effect in general, we take a look over the 2m temperature anomaly map through the 5-day period. Both periods, January 10-15th and January 15-20th, are trending into much colder weather for most of Europe. While the earlier period indicating very cold weather across the south-central and southwestern Europe, the latter indicates cold weather spread also across the western Europe as the northern Atlantic blocking ridge advects and strengthens into the Arctics, resulting in troughs moving further west (remember: SSW means reversal zonal flow in mid/high latitudes). 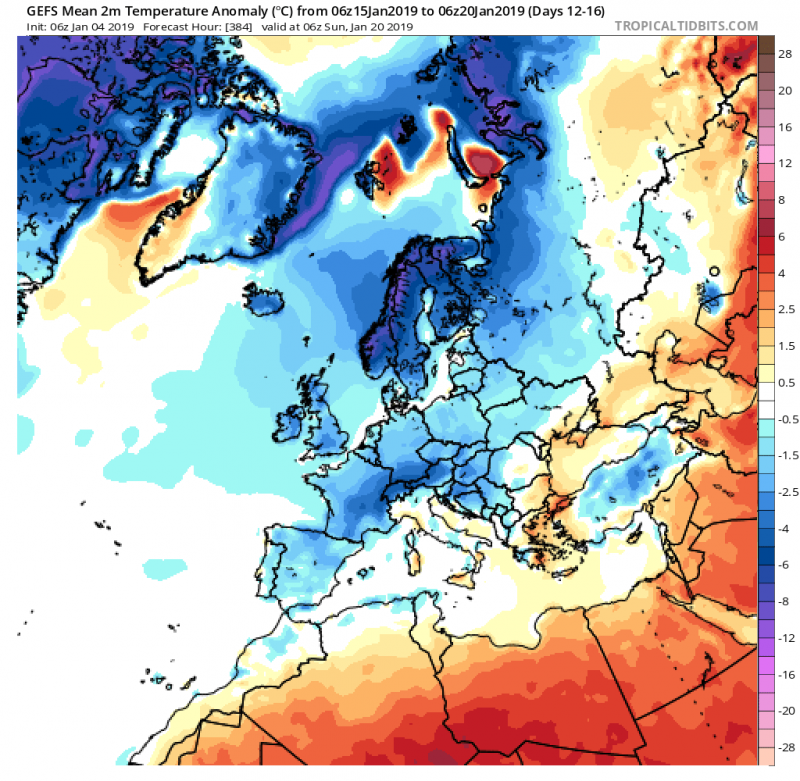 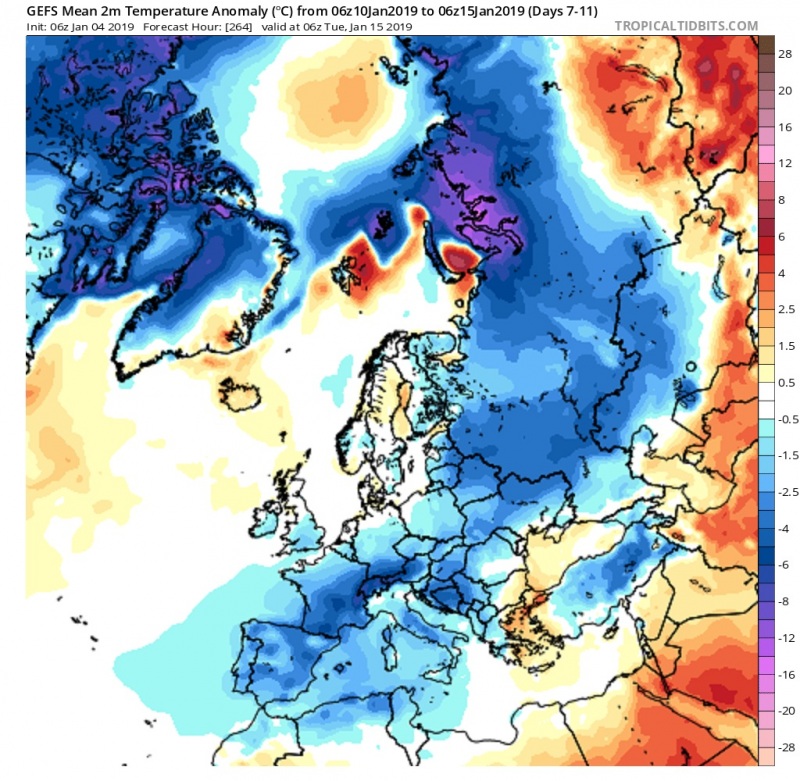 The next 5-day period will remain similar to the previous one, colder weather over the eastern half of Europe and warmer further west. Significantly warmer weather is expected over northern Europe as the ridge strengthens into the Arctic region. 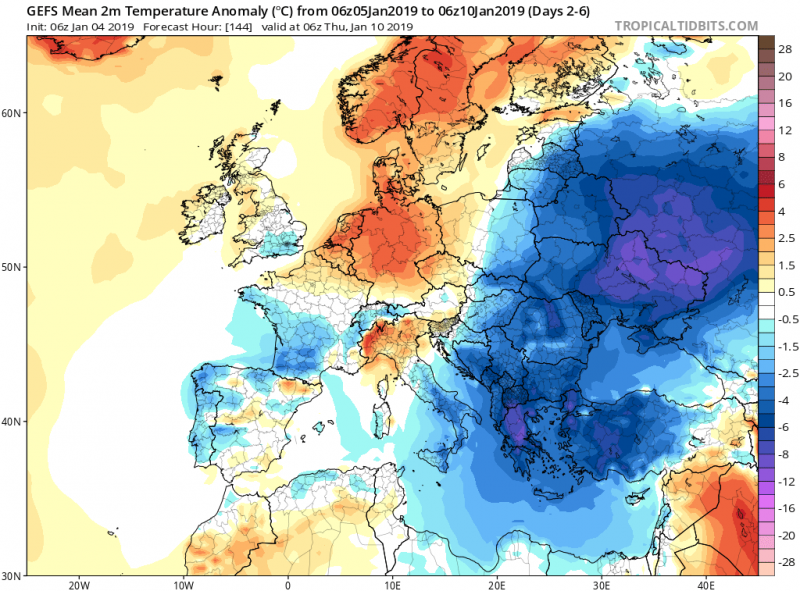 Detailed ensemble forecast maps based on ECMWF and GFS models (GEFS / EPS) across the Europe by mid next week – both models agree on the intense outbreak pushed into the central Europe, affecting also western and southwestern Europe. 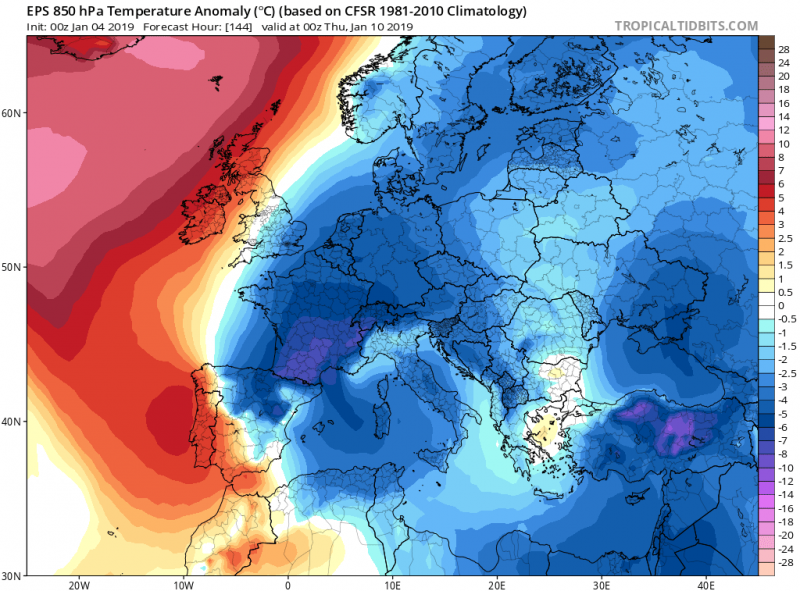 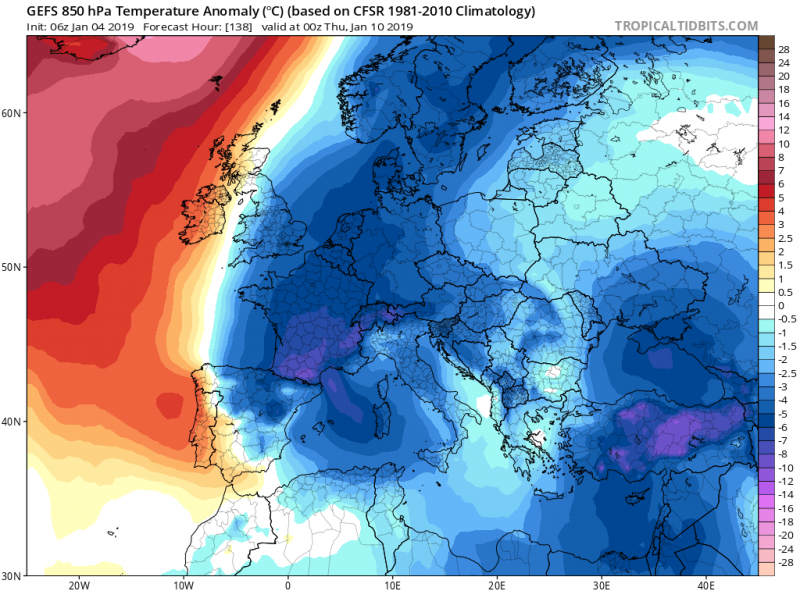 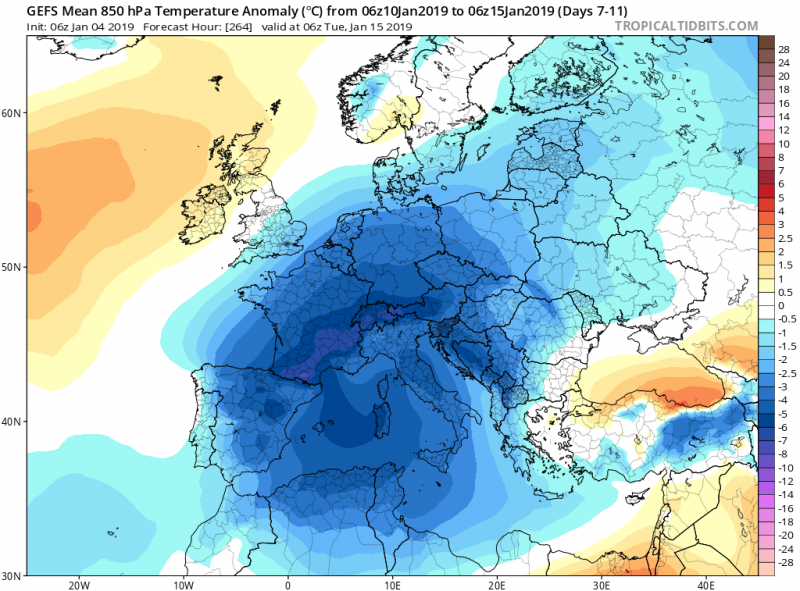 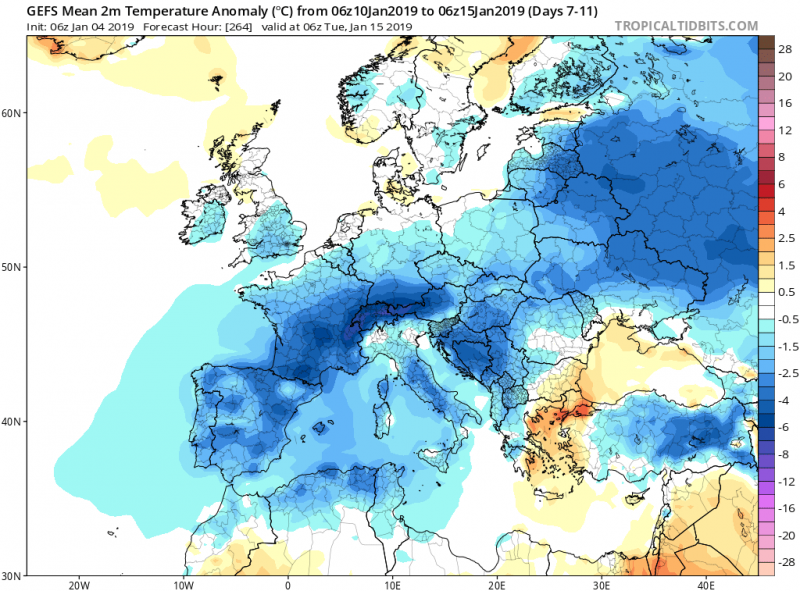 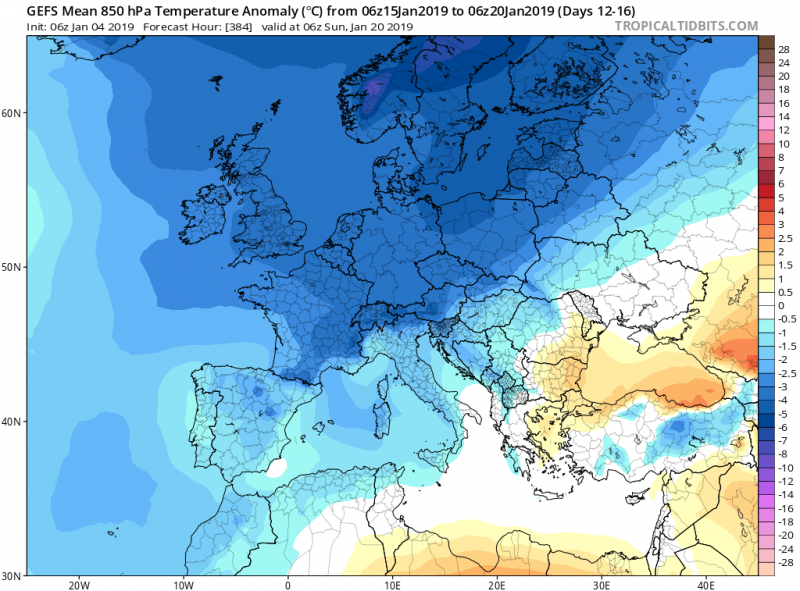 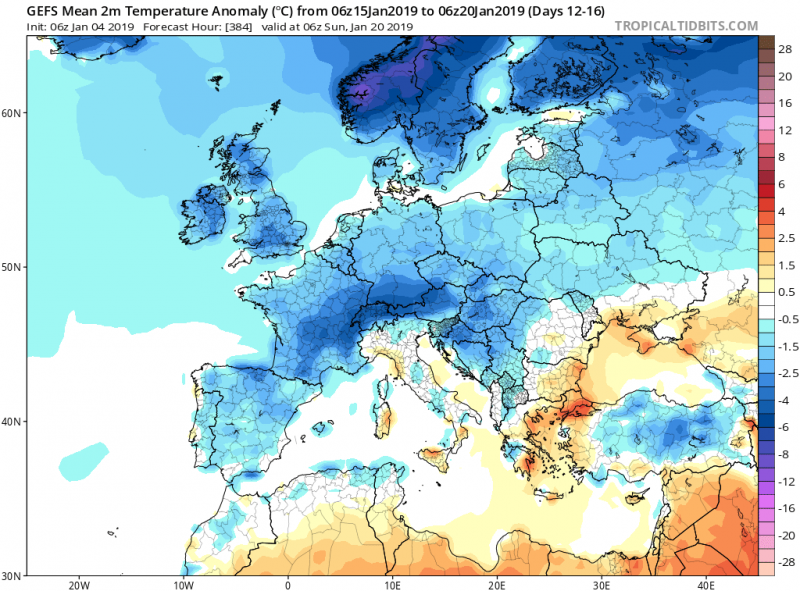 Here is the probability of snowfall across Europe for January 10th, 15th and 20th based on the ensemble GFS (GEFS) model. We can see quite some chances for snowfall in many parts of Europe. This time frame, around mid January, is the early effect of the Polar Vortex split and comes 2-3 weeks after the SWW. This is a typical lag between the warming in stratosphere and effects in the lower troposphere. Given the remnants of the Polar Vortex staying over Europe at the same time, we can expect an extend of winter weather as well. 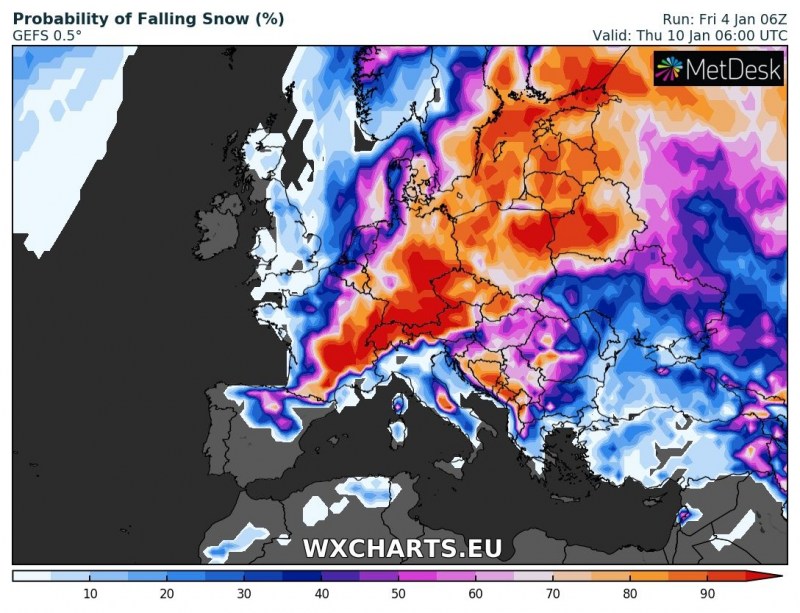 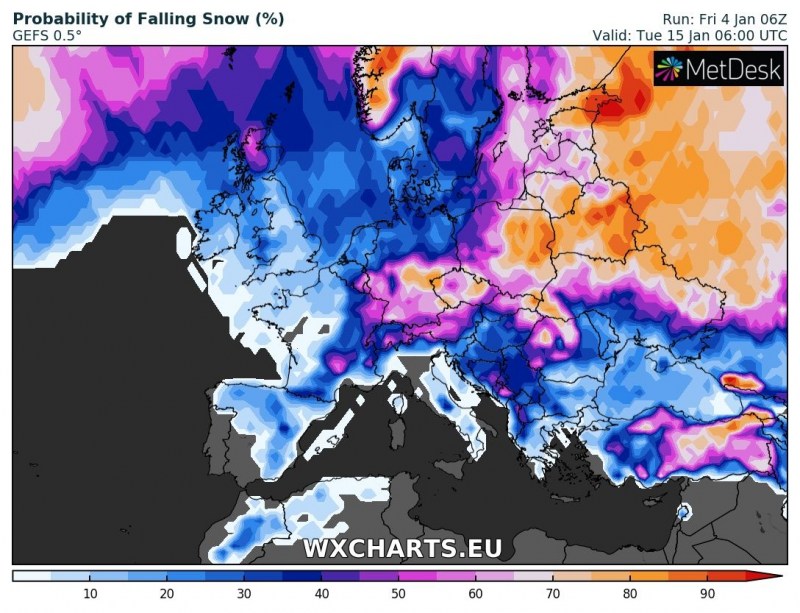 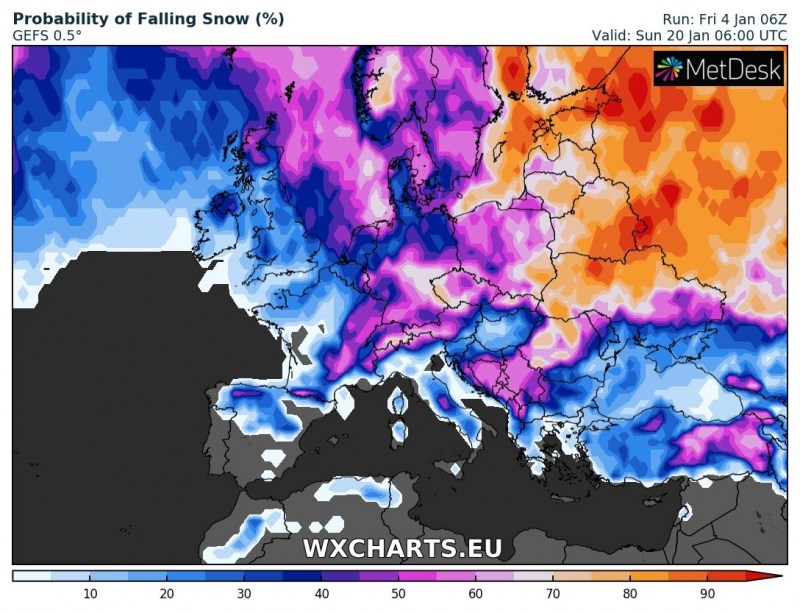 We will continue monitoring the evolution of the Polar Vortex dynamics – so stay tuned for further updates in the coming days!