The official start of the new Winter season 2022/23 is approaching fast. And the weather across North America is forecast to become extremely cold through the remainder of this week. A significant Arctic cold outbreak will spread across much of the United States, resulting in January-like temperatures for 100+ million people. In addition, a potentially historic winter storm will dump several feet of snow on the shores of Great Lakes Erie and Ontario, precisely Buffalo.

The general weather pattern across the North American continent has shifted into more wintry mode over the recent weeks, snow has been reported well south into the central United States and to the East. Freezing mornings have already been experienced across states in the South.

Farther north, much colder weather spread from Canadian prairies into the northern states followed soon by the major winter storm and the very first blizzard of the season 2022/23. Temperatures even below -25 °F have been observed from Montana to Dakotas and Minnesota in places. It was breaking records for the month as well.

This week, the pattern is shaping up a new, record-breaking Arctic cold blast into much of the CONUS starting late Thursday, and extending into the weekend. Temperatures will be significantly lower than normal for mid-November. Actually, daytime temperatures will be as cold as we usually experience in the middle of January. 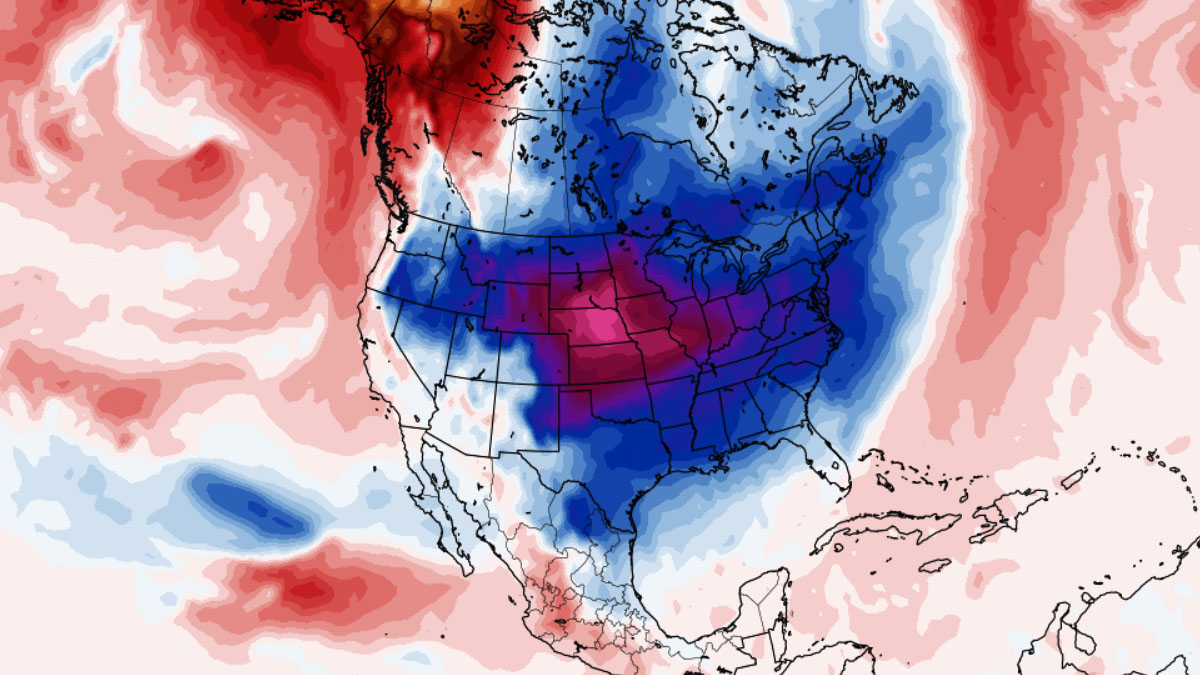 The upcoming days are forecast to bring proper winter-like weather, many records are likely to be shattered.

In response to the typical dipole weather pattern set up across the United States, cold weather is maintained across the country. Meaning we have a blocking High on the West and lower pressure to the East, resulting in the general flow from the north-northwest.

This Wednesday afternoon, temperatures across the CONUS stayed below freezing across the Northern Plains and a large part of the Midwest, and farther east around the Great Lakes. Winds were helping the temperatures to feel even lower, with windchills in the mid-10s F from Montana across Dakotas to Iowa and Minnesota.

With the arrival of another strong cold push in the upper levels from the north, the cold pool will intensify and move from Canada into the Midwest and onto the Great Lakes through the coming days and over the weekend. With the stronger north-northwesterly flow establishing aloft, additional blasts of much colder Arctic weather will drag deeper toward the South and also toward the East Coast.

One of the greatest results of the most significant Arctic blast of the winter season will be the major snowstorm for the Great Lakes. Precisely on the eastern shores of lakes Ontario and Erie deposited downwind of the winter storm’s trajectory.

Here is the official forecast chart from the NWS Office in Buffalo, NY. Some areas could receive as much as nearly 50″ (4 feet) of snow through Sunday. 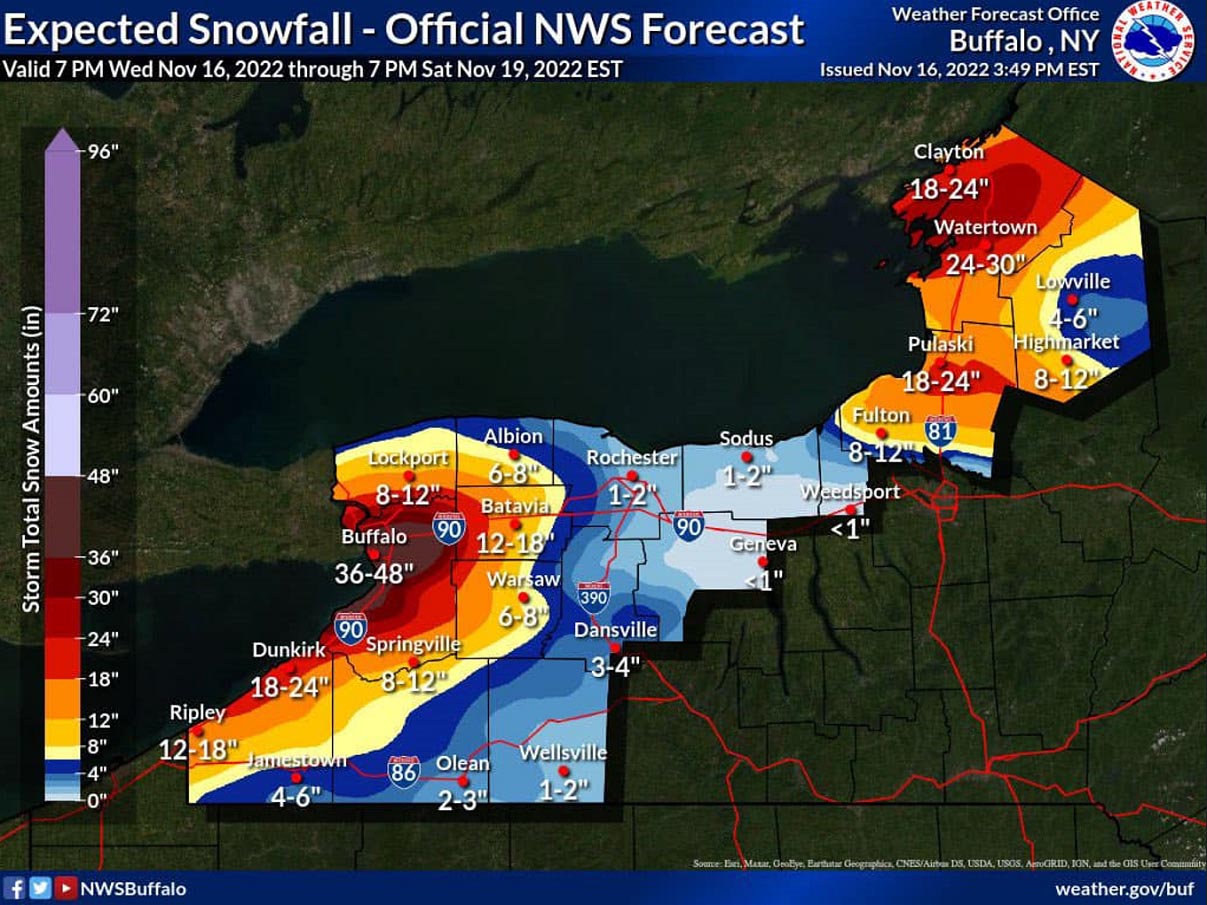 Below is the video animation, revealing the spread of the upcoming Arctic cold temperatures from central Canada into the central United States and farther toward the East Coast later into early next week. We can quickly see how particularly intense and frigid air mass is forecast to arrive in the region.

Days will stay well below normal for tens of millions across the nation, as from Friday through Sunday around 90 percent of the Contiguous U.S. will experience below-normal temperatures and cold. Also combined with chill winds.

Temperatures will gradually begin rising after Monday from the west as a strong High establishes and warming begins. The coldest air will remain confined to the northern and northeastern states and over Canada next week.

Let’s dig deeper into the upcoming significant cold weather event. We will cover the progress of the cold air across the nation and bring details of the major winter storm with potential historic snow for the Great Lakes.

A textbook dipole weather pattern has been established from the northern Pacific and western North America with a deepening and significantly colder upper trough to the east. It is forecast to bring frigid cold airmass into a large part of the United States in the coming days.

As the surface, a blocking High strengthens across the western portions of the continent, the channeling flow from Canada towards the south will introduce a new, powerful intrusion of very cold, Arctic air mass far towards the south. The core of the low aloft is pretty deep, meaning the air mass will be extremely cold in the upper levels. 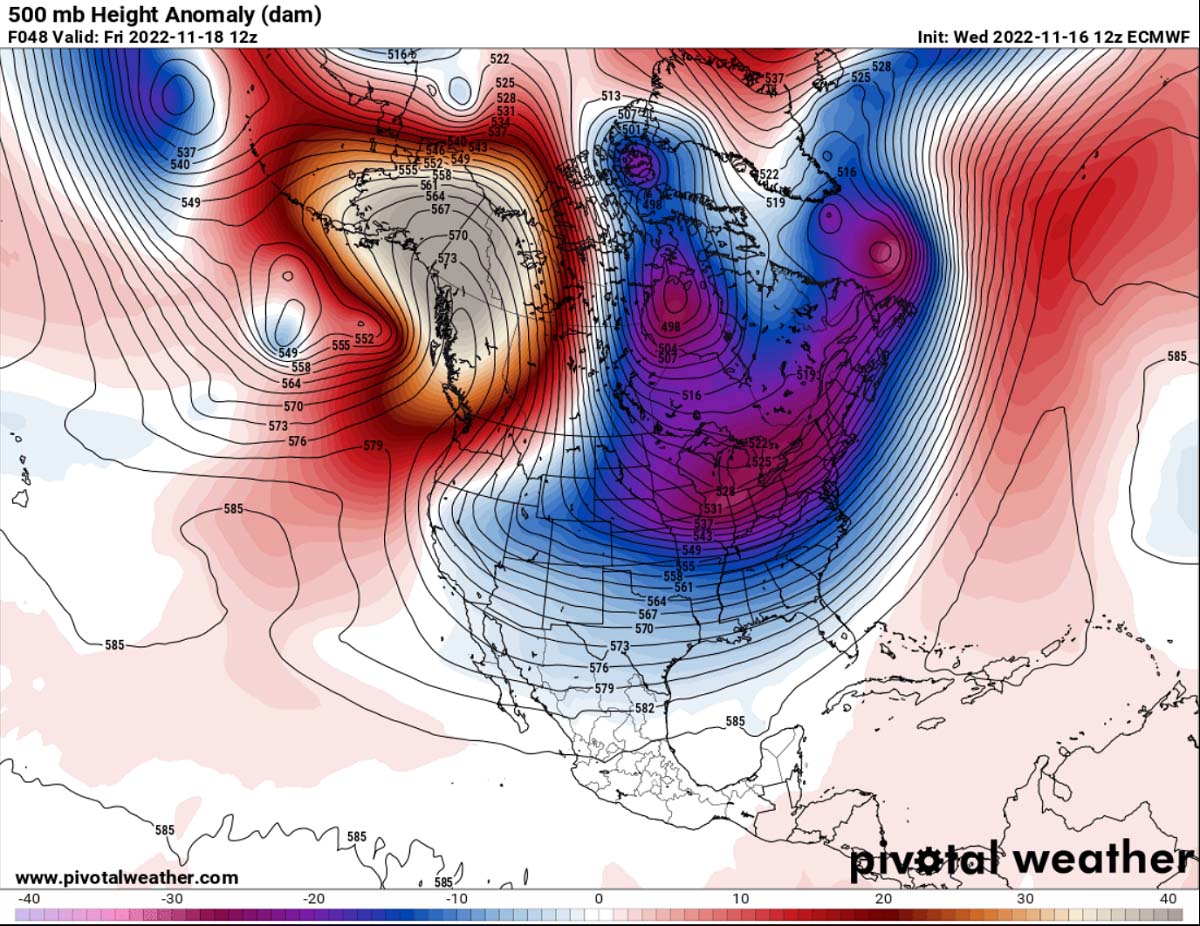 Normally, the development of a high surface pressure follows under such a strong blocking High aloft. The extensive high-pressure system will dominate most of the North American continent after Friday, having the highest pressure across the Pacific Northwest in Canada down to the northern Rockies in the United States. This will create a strong pressure gradient against the much lower pressure to its east.

In other words, winds will increase in the channel between the two large-scale features. The following chart below hints at a large pressure difference between western Canada (nearly 1050 mbar) against the departing low-pressure system over eastern Canada (999 mbar), so almost a 50 mbar difference. 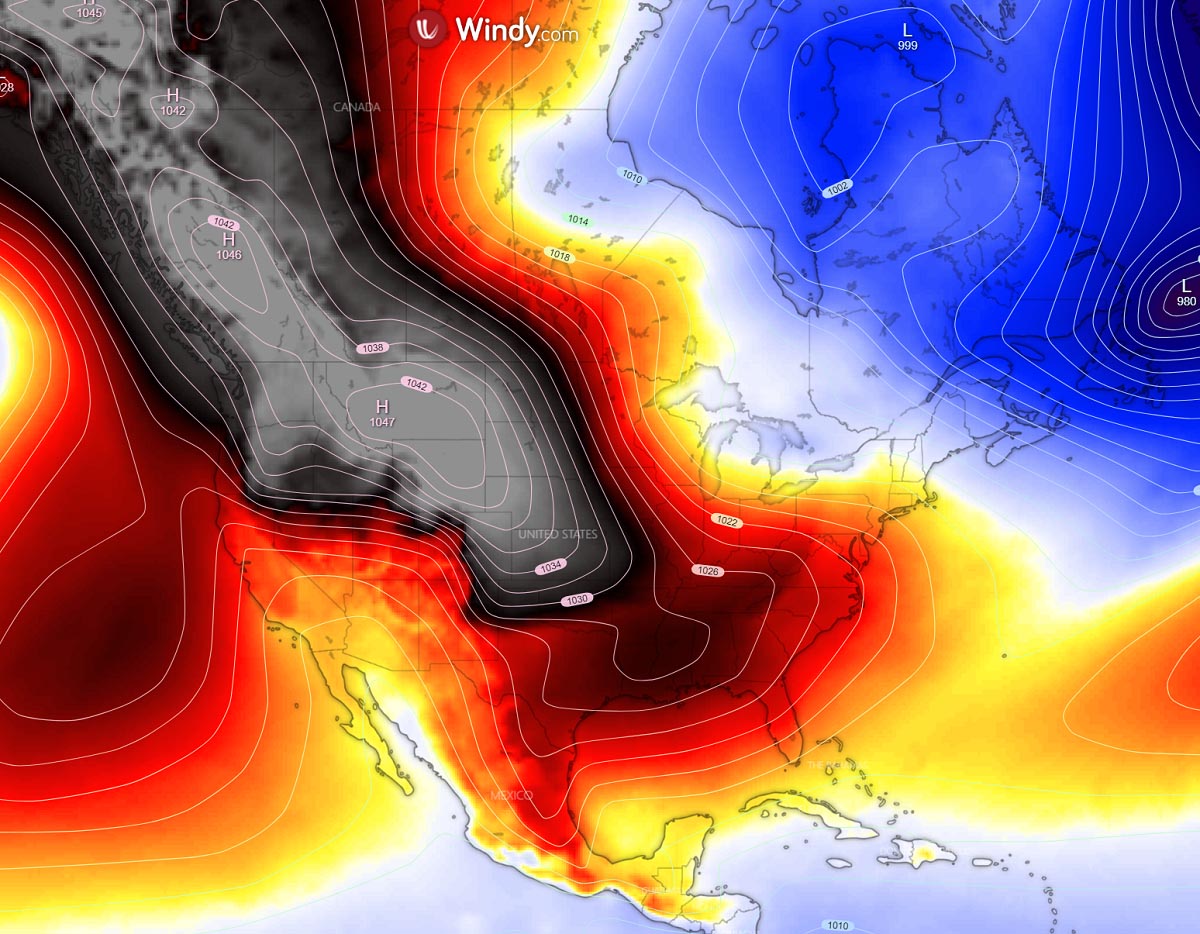 These enhanced winds in between will lead to a massive transport of much colder, frigid cold Arctic air mass from central Canada towards the central and eastern U.S. in the core of this Arctic blast. Putting regions from the central Plains and Midwest across the Great Lakes into a deep freeze.

The cold pool will be very large and will be the coldest of the winter season 2021/22 so far for the central and northern United States. Temperatures will be near 20 to 30 degrees Fahrenheit below average. 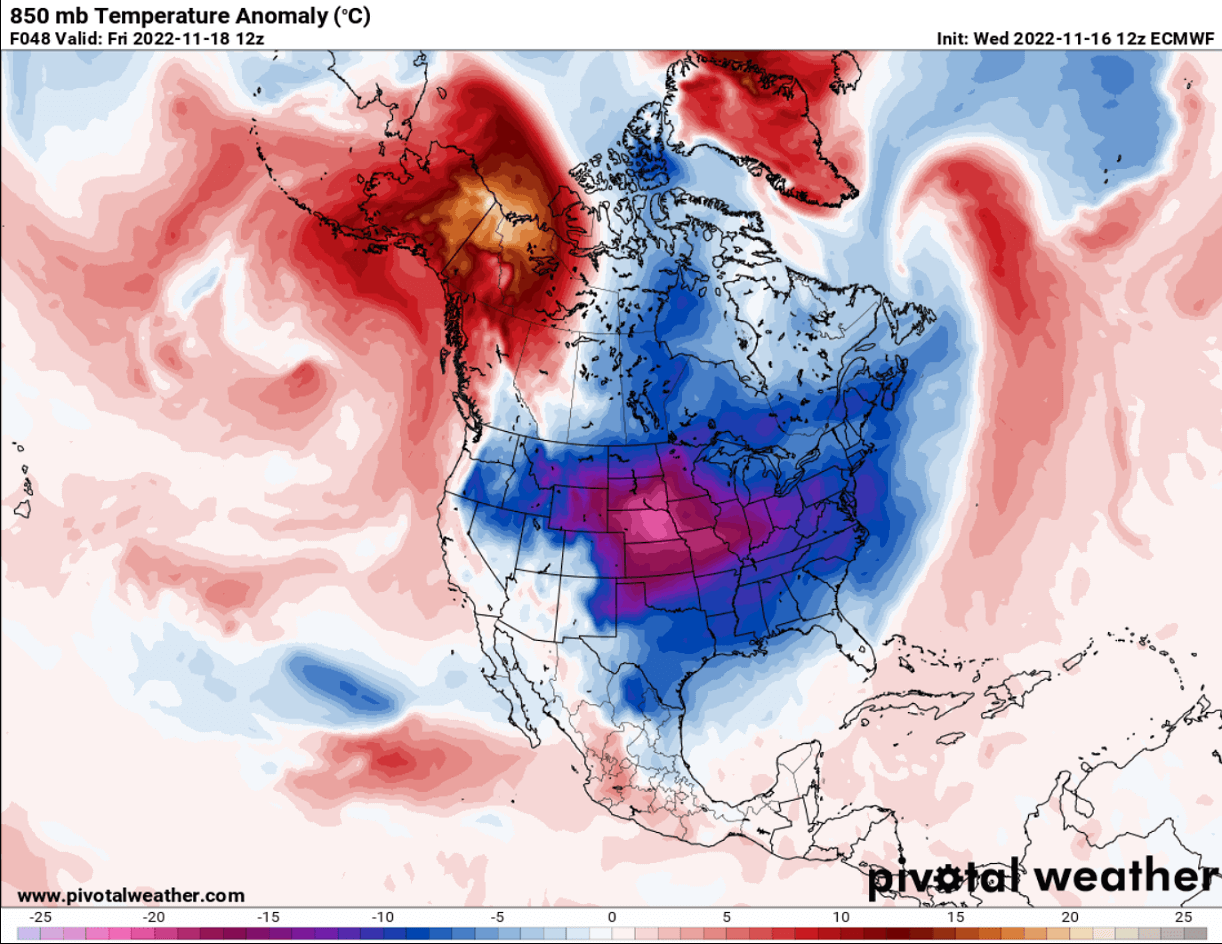 Basically, most of the United States will experience well-below-normal temperatures on Friday and Saturday as we see from the chart below. Temperatures around 15-20 °F below will be from the Gulf Coast across the Midwest, even colder farther north.

Therefore, temperatures will be the coldest across the far north, from Dakotas to Montana. With daytime temperatures on Friday and Saturday around 30-40 °F below normal. 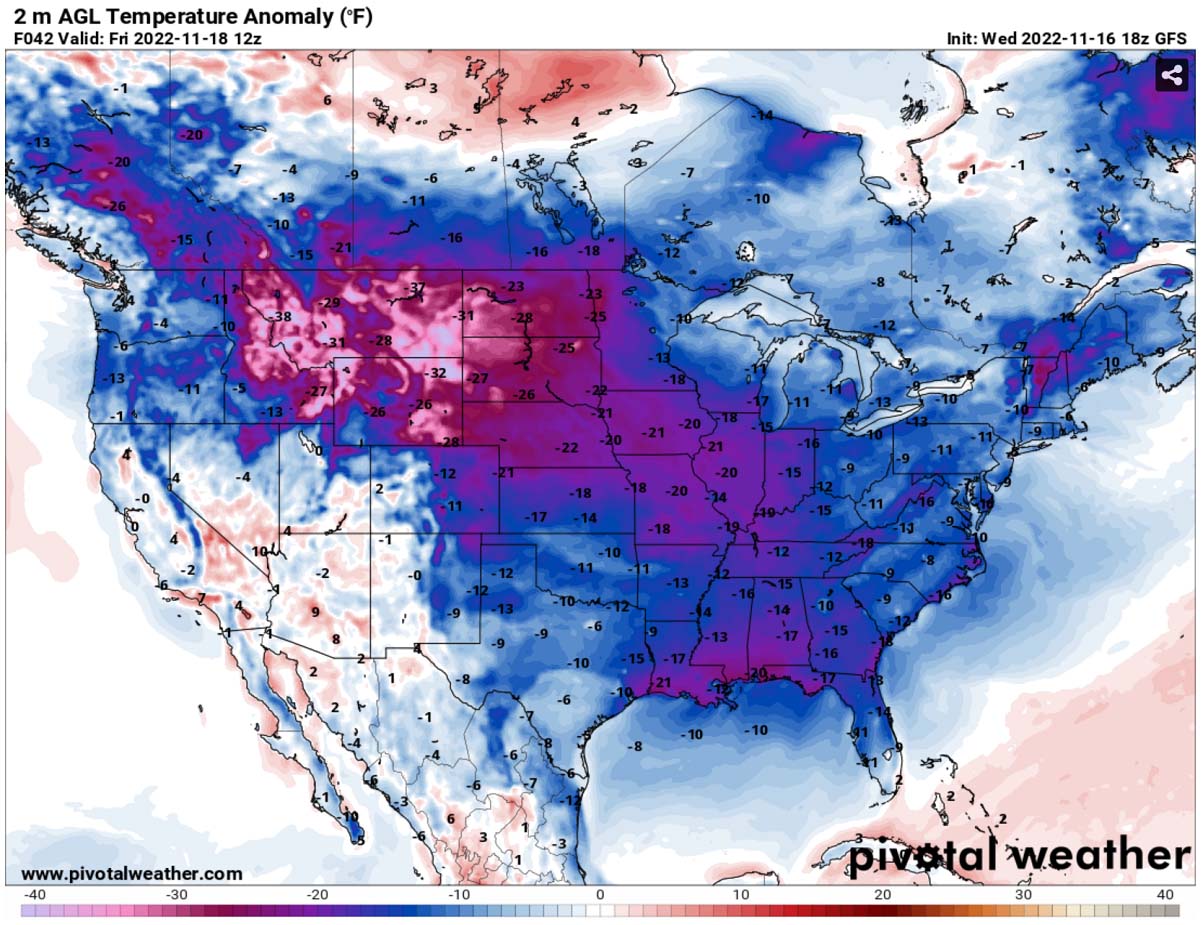 Daytime temperatures are forecast to dip into the mid-10s on Friday through Sunday afternoon across the north. And indeed push much lower through the night hours from tonight until Sunday night. It has not been as cold yet this season for many across the country, exposing tens of millions to the extreme cold.

Temperatures should stay below freezing from Oklahoma/Texas Panhandle to Ohio Valley northward on Friday. With temperatures in the mid-40s from north Texas across the mid-Mississippi Valley towards the Mid-Atlantic. 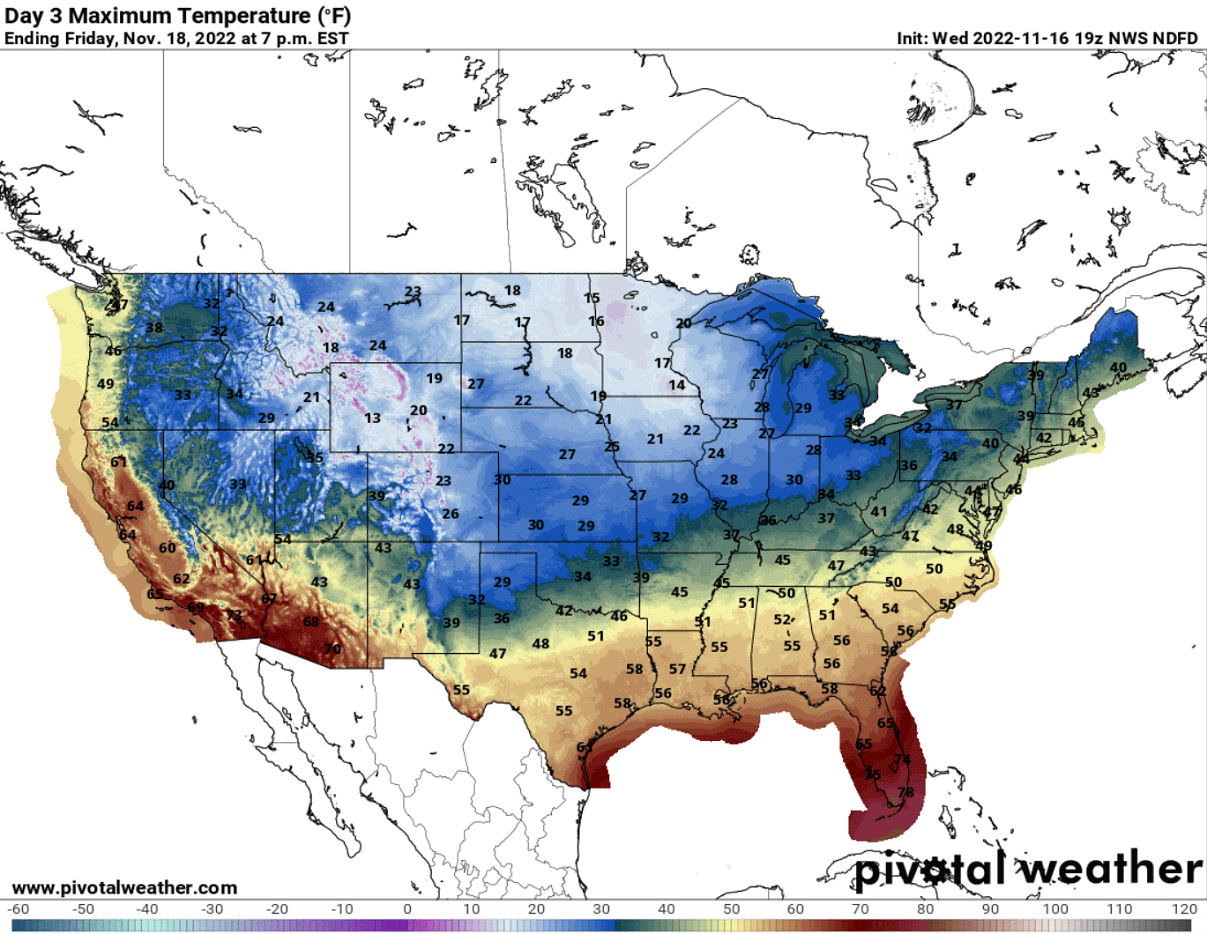 After Sunday, the cold air will be gradually advancing further northeast, but will not warm up significantly until early next week.

When we observe how anomalous is the outbreak of cold Arctic air mass compared to the normal values, we often use Meteogram charts. Attached below are the Meteogram charts for Des Moines, Iowa (left) and Washington D.C. (right) where both clearly reveal that the Arctic blast will be very strong.

We can see that the core of the Arctic cold will be nearly 20 °C (that is nearly 40 °F) colder than normal. This is indeed pretty significant for mid-November.

As we can see on the Meteogram forecasts above, the cold pool will not be particularly long-lived. Temperatures should come back to around normal values after Nov 20th, so early to mid-next week.

HISTORIC LAKE-EFFECT SNOW IS FORECAST ALONG THE LAKES ONTARIO AND ERIE, WITH UP TO 4 FEET OF SNOW LIKELY

Typically, when a significantly cold air mass travels from Arctic Canada towards the southeast, it also spreads across the Great Lakes quite frequently. This effect cools down the surface water of the lakes and leads to their freezing. However, as we are still in the early winter season this mid-November, the lakes are completely ice-free according to the NOAA report this week.

And also the water temperatures are relatively high despite the recent cold events. Meaning the reservoir of warmer and moist air above the lakes will result in a major winter storm with very heavy snow, known as the lake-effect snow until Sunday. 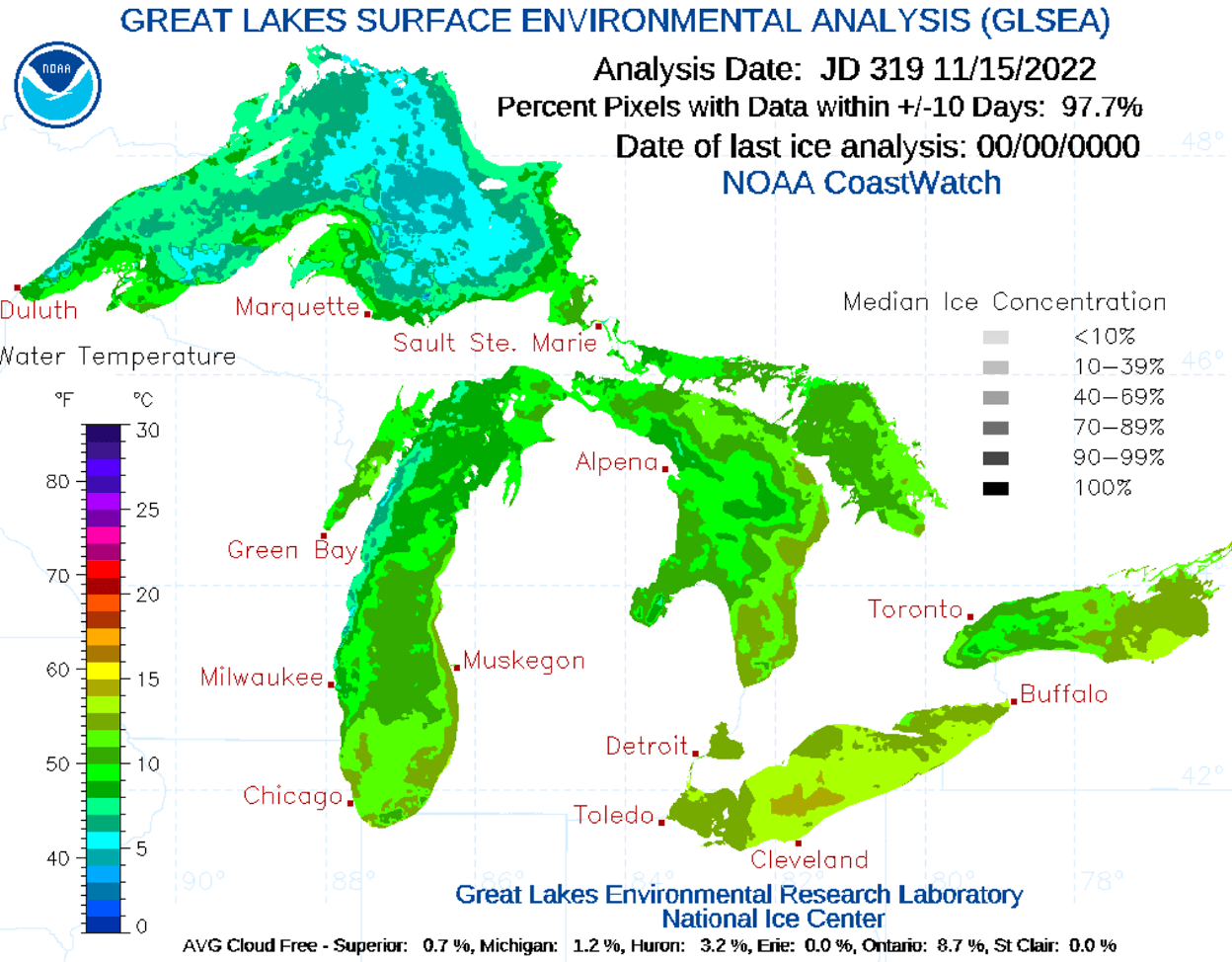 Normally, until the ice coverage doesn’t increase across the majority of the lakes, any of the Arctic cold blasts arriving from Canada are prone to develop significant lake-effect snow across the Great Lakes. Meaning, the more ice-free the Lakes waters have, the higher potential is there for lake-effect snowfall and also the highest snow accumulations.

The lake-effect snow is a rather common occurrence across the Great Lakes region during the late fall and winter months. It develops when cold air, often originating from Canadian Arctic, moves across the still relatively warm waters of the Great Lakes. 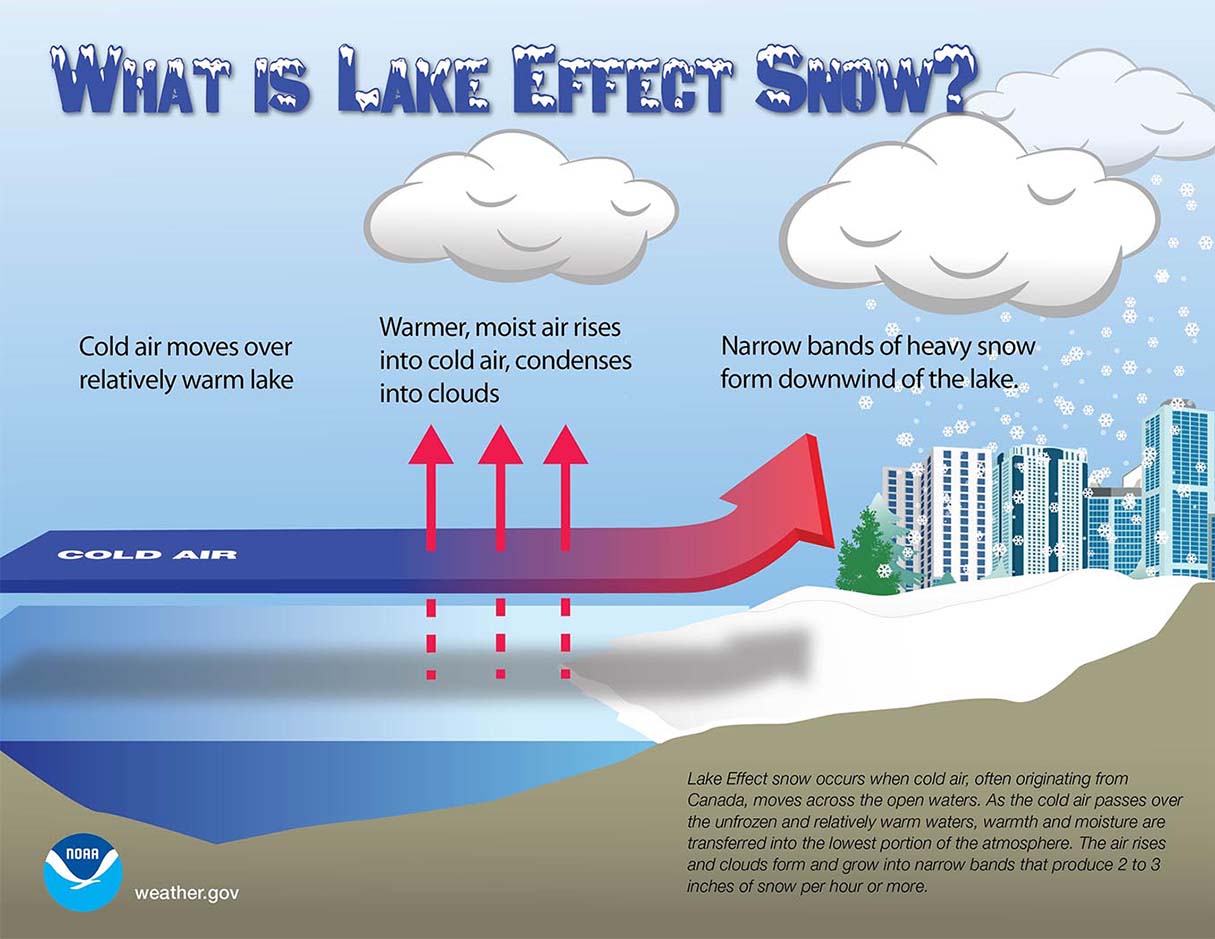 As we see on the schematic chart above, with the cold air mass moving over the unfrozen and always warmer waters of the Great Lakes then the coming air, warmth, and moisture are transferred into the lowest portion of the atmosphere. With the air masses rising, it leads to clouds form. Typically growing into a narrow band that produces heavy snow bands with 3-5 inches or even higher snowfall rates.

The most important key component in the process is the wind direction. It determines which areas will receive the most intense lake-effect snow and indeed the highest accumulations. The heaviest snow typically occurs in very narrow bands and squalls. It may be falling in one location, while the Sun may be shining just a mile or two away in either direction of the snow band core.

The intensity of the Arctic cold and wind direction associated with the upcoming blast is forecast to trigger a very significant 3-day round of lake-effect snow starting Thursday night. Thanks to much colder temperatures and the near-ideal wind direction arrival onto the lakes Erie and Ontario. 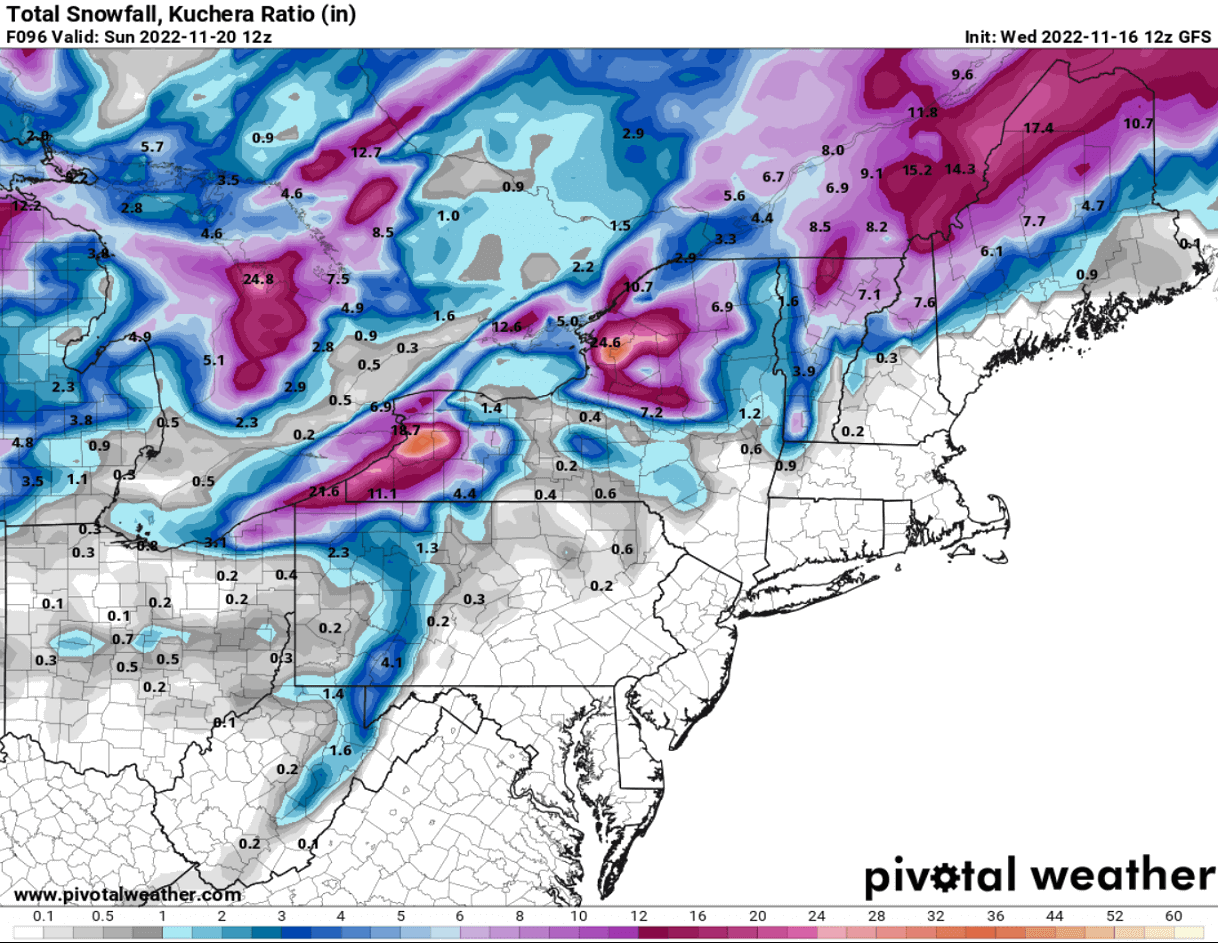 The most intense snowfall with this winter storm is forecast for the areas around Buffalo, NY, and Watertown, NY. Both will be the worst hit and could end up with 3-4 feet of new snow by Sunday afternoon.

A significant amount of snow is also along the whole southern shores of lake Erie and the southeast shores of lake Ontario. Expect significant travel disruptions in these areas, with road closures due to massive amounts of snow, blowing snow, and near-zero visibility at times. Snow intensity will be very high to the extreme at times, especially where the most significant snow bands will form.

It is very likely that thundersnow will also occur, given the quite strong temperature difference between the lake waters and the Arctic cold air aloft.