After the stormy weather in the South recently, this week brings a significant change in the general weather pattern across Canada and the United States. A large and deep trough enters northwestern CONUS, releasing a powerful winter storm. Major snowstorms with blizzards and heavy snow will blanket the northern Rockies and Dakotas to Minnesota.

In the winter storm’s wake, the most significant cold outbreak of the season is forecast to spread into southern Canada, as well as into Montana and western Dakotas. With temperatures near 30 degrees below normal for early November.

A progressive weather pattern will take place across a large part of the North American continent, extending into the mid-November days. The coldest air of the season is forecast to gradually spread across the Great Plains and Midwest through late this week into the weekend, reaching the eastern U.S. as well. 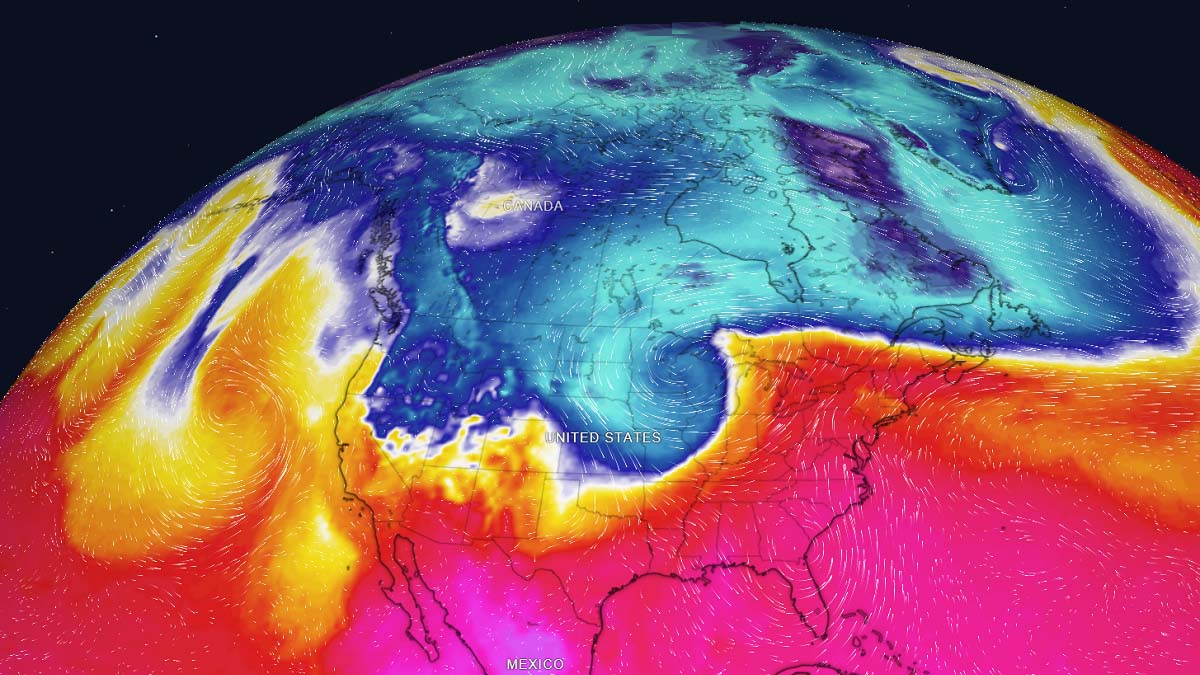 Until the winter storm finally reaches Midwest, unseasonably warm weather will continue from Texas to the upper Midwest as southwesterly winds will advect a lot warmer air mass ahead of the developing winter storm.

The attached video animation below is revealing how the pattern evolves with a strong frontal system associated with deep surface low. The system will eject the Rockies and turn towards the Upper Midwest in the second part of this week. The cold will reach Midwest for the Veteran’s Day on Friday.

The winter storm will first develop across the West and Northwestern U.S., dumping significant amounts of snow on California’s Sierra and Southern California’s mountains. After Wednesday, the system will gradually advance toward the northern Rockies with a major snowstorm developing as the surface low deepens.

A DEEP UPPER LOW DEVELOPS, WINTER STORM IS FORECAST TO BRING HEAVY SNOW AND BLIZZARD TO THE NORTHERN U.S.

The general weather pattern that is forecast to result in the first significant winter storm across the United States and southern Canada is characterized by an impressive and very deep upper trough. It is gradually evolving into an upper low while moving across the northern Rockies late this week. 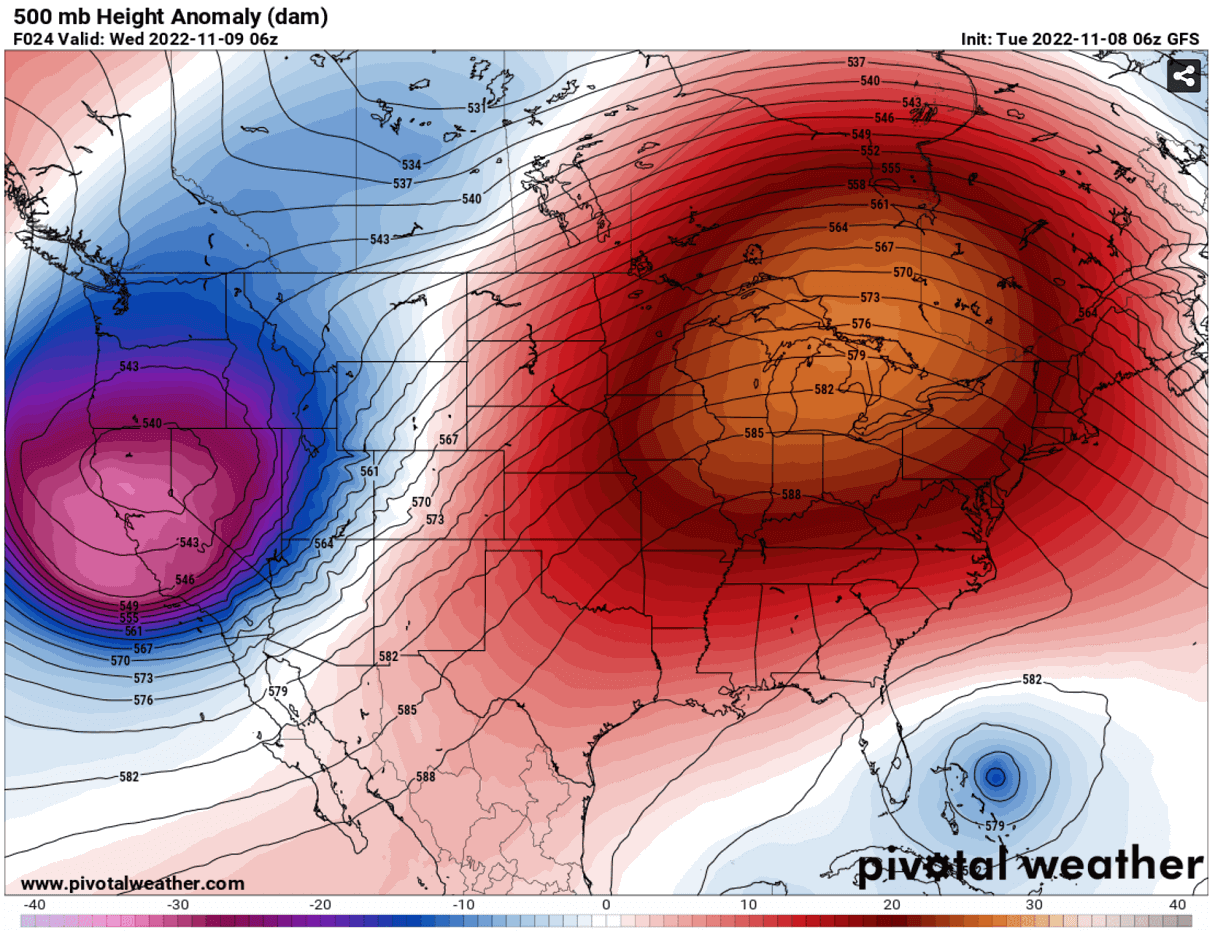 The upper wave is particularly deep in its early stage, emerging from the Pacific Northwest before its core moves towards the Rockies after Wednesday. This will gradually release a strong surface depression in the Rocky mountains Lee side. Meaning conditions will be rapidly deteriorating with the winter weather, including heavy snow and blizzard conditions forecast to intensify for the Dakotas and towards Minnesota. 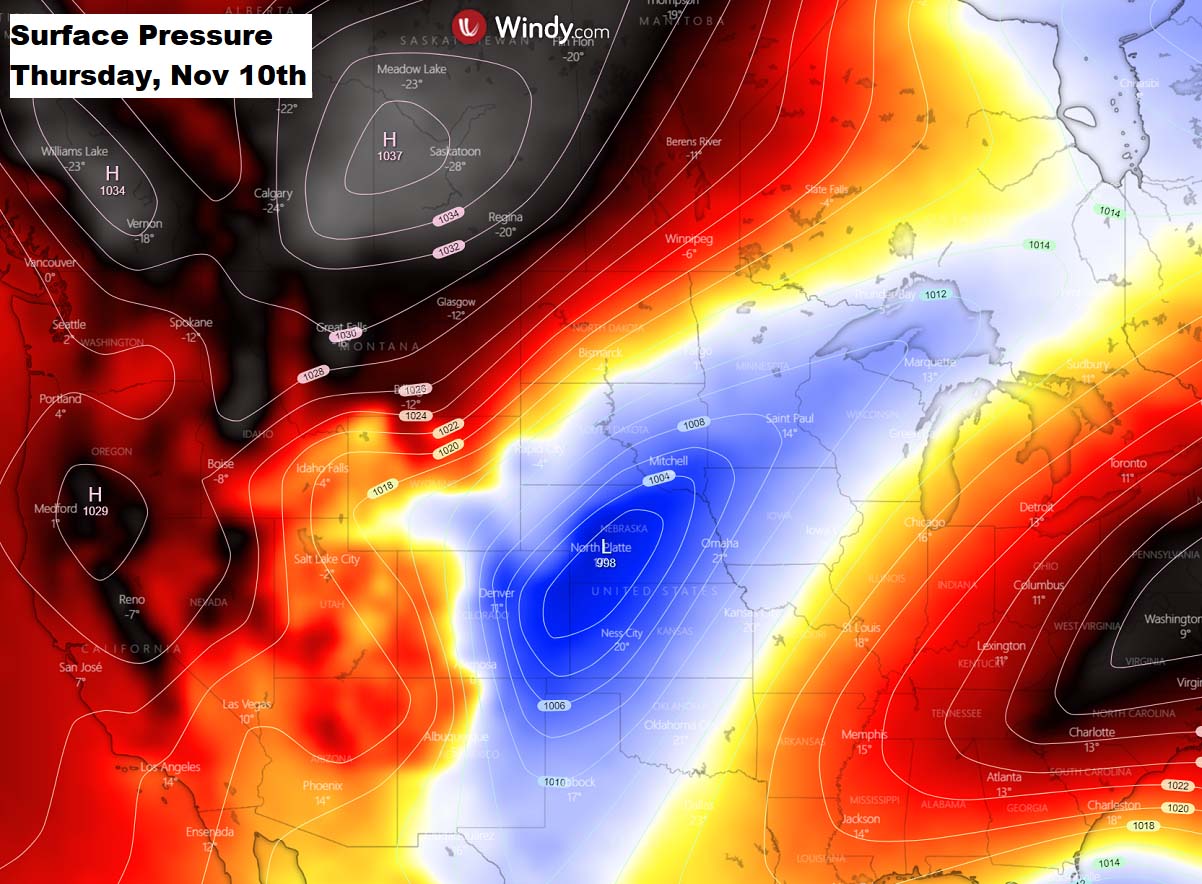 Winter Storm is forecast to develop heavy snow for the Northern Plains on Thursday, gradually spreading east while the system continues towards Minnesota and northern Wisconsin Thursday night into late Friday.

Snow will be very intense across the northern Rocky Mountains towards Dakotas and accumulate fast. Heavy snow accumulation will also lead to slippery travel conditions for travelers across the region.

Snow accumulations are forecast to be the highest from western Dakotas to northern Minnesota, with many areas receiving about 6-12 inches of snow. Locally, even more snow, 15-20 inches is possible. Near the core of the traveling surface low. Precisely from northwestern South Dakota across south-central and eastern North Dakota into far northern Minnesota and south-central Ontario, Canada. 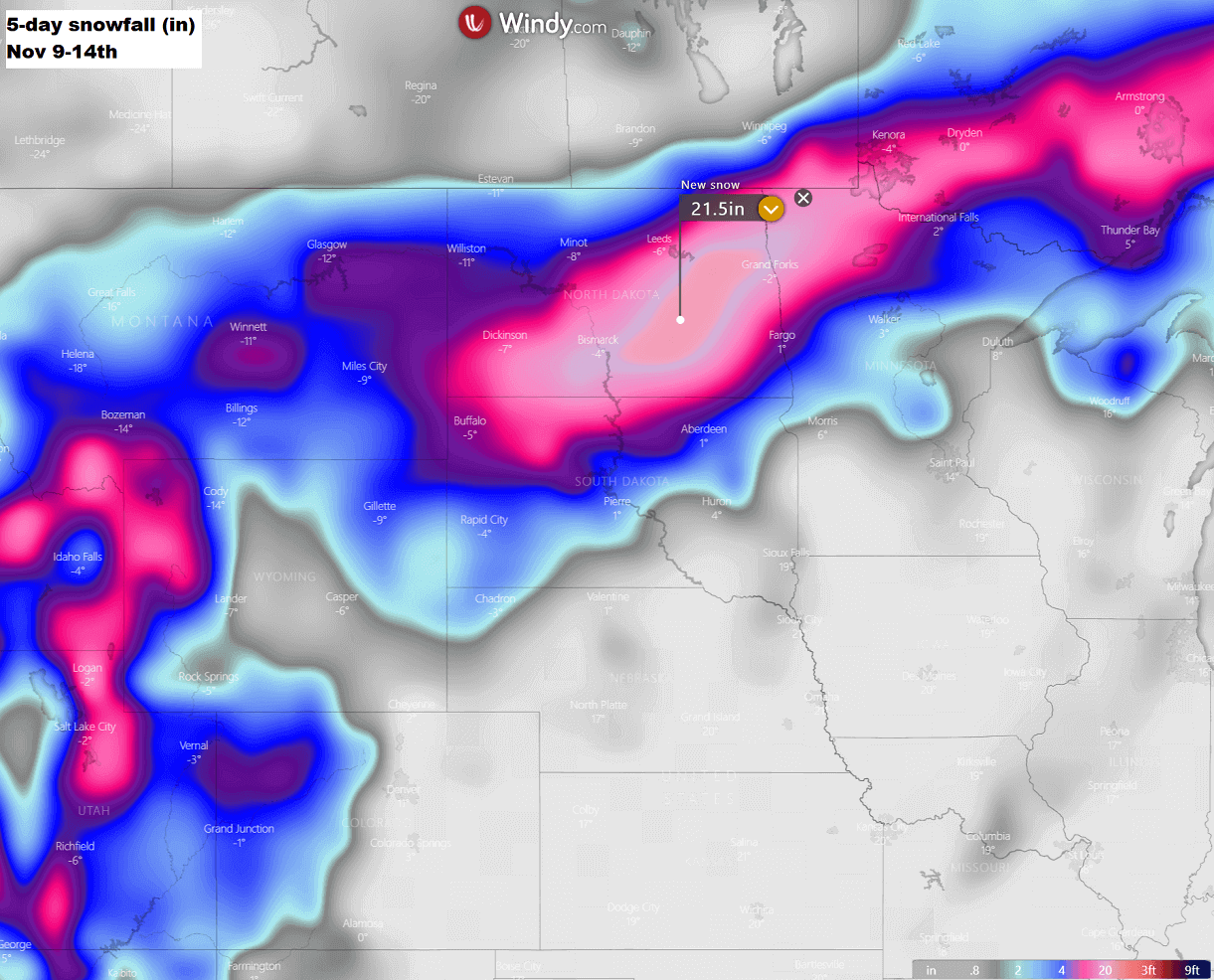 The tight pressure gradient will develop strong to locally severe winds from mid-Thursday into Friday, with frequent gusts above 50 to near 60 mph across the Northern Plains. The strongest winds will spread from the Dakotas into northern Nebraska and Minnesota, and further into Ontario later on.

This combination of heavy snow and strong winds is forecast to produce blizzard conditions. We can expect significantly reduced driving conditions with near-zero visibility due to blowing snow. Expect closure of roads, including stretches of Interstates 29, 90, and 94 which are typically most affected by these types of winter storm events.

A combination of both convective and orographic snowfall is forecast, high moisture and increasing winds will push the snow accumulations up quite fast after late Tuesday for the Rockies. Up to 2 feet of snow is reasonably possible. 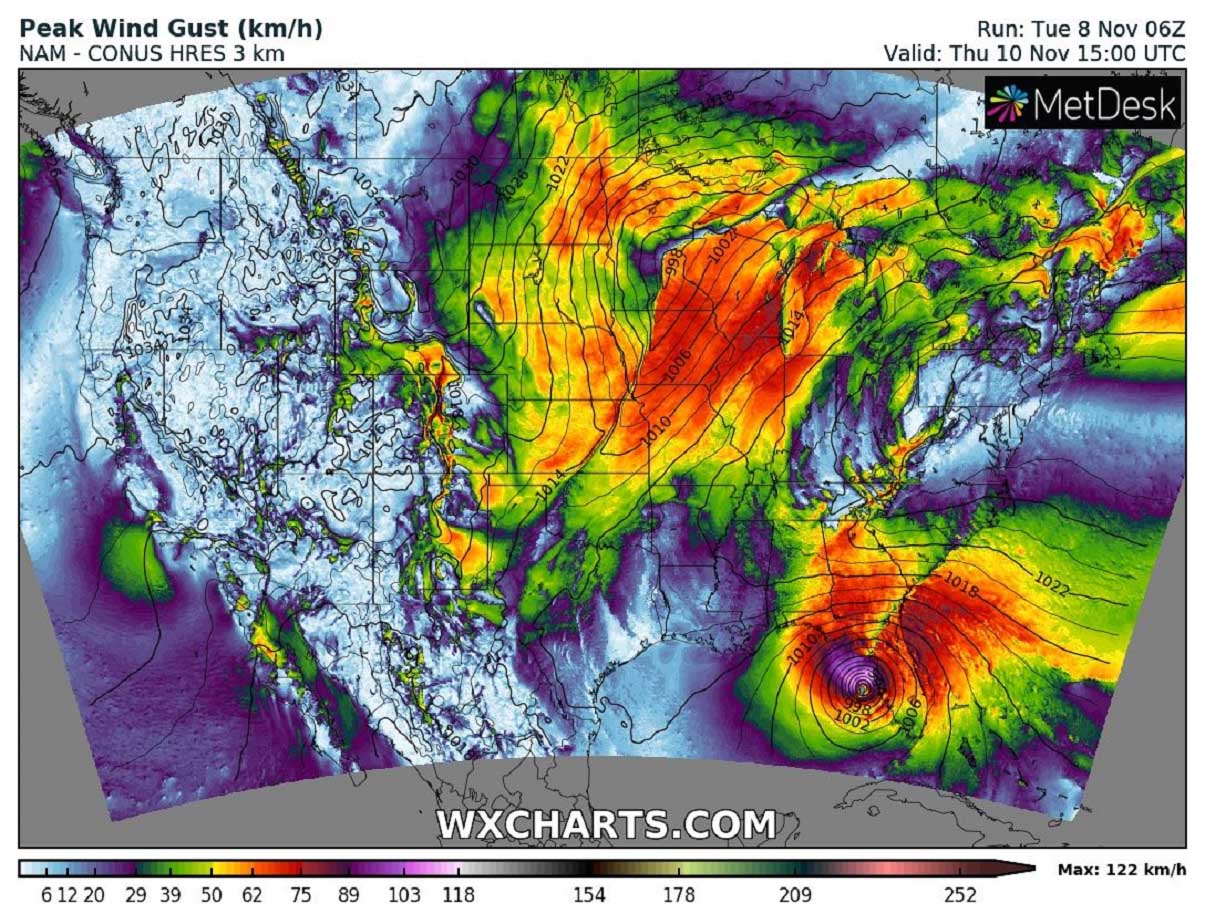 Travelers across the Northern Plains from Thursday into Veteran’s Day on Friday should consider being cautious about rapidly changing and deteriorating conditions as the winter storm intensifies. It is also advised to delay unnecessary travel for the storm to pass.

Areas farther south and east of the storm’s core and heaviest snowfall could take advantage of enough warmer air aloft to produce a narrow band of sleet and freezing rain, precisely from South Dakota to central Minnesota Thursday into Thursday night. Roadways may become icy. 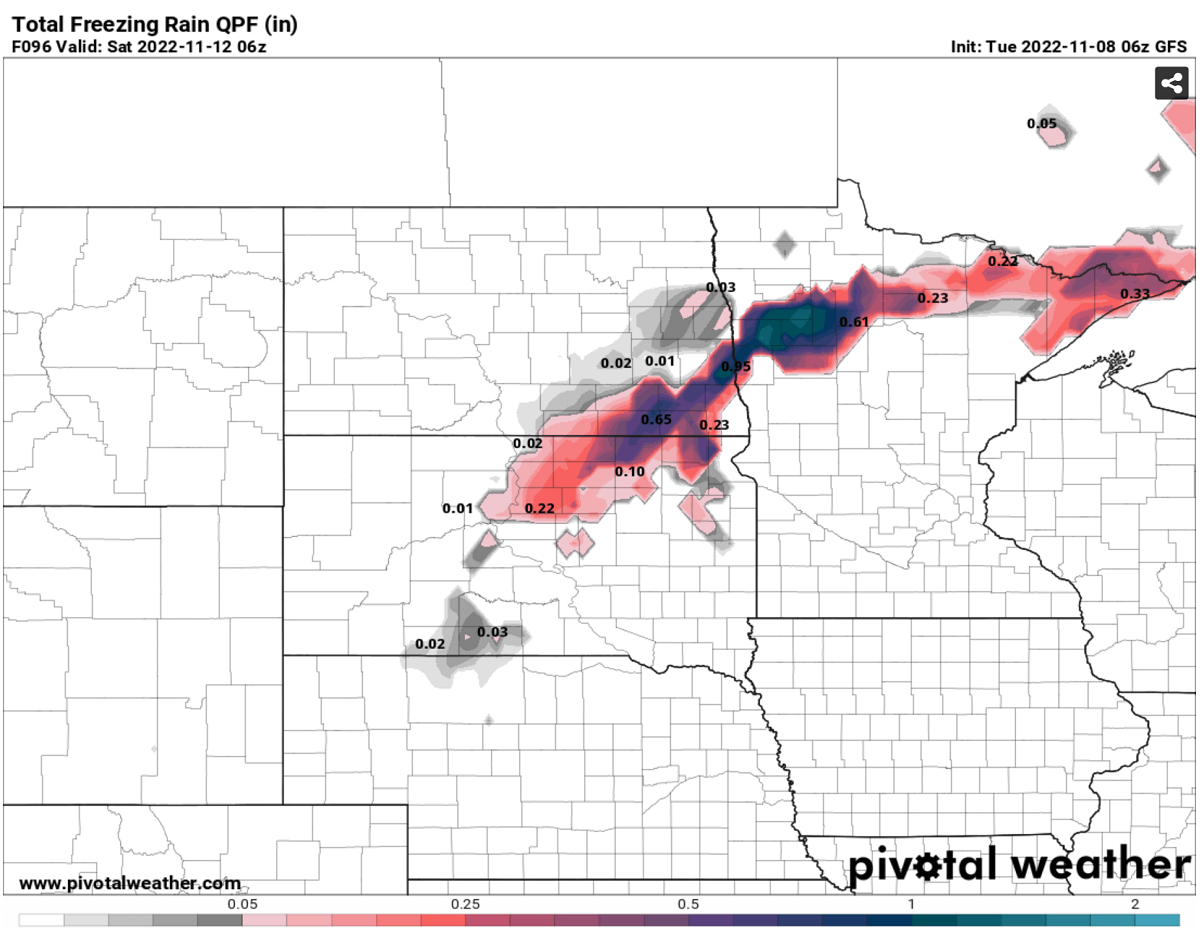 Temperatures will also become lower with time from Thursday into Friday as the winter storm advances east-southeast. Much colder weather with extremely cold temperatures will spread in the system’s wake. First developing over southern Canada, gradually spreading into Montana by mid-week, then continuing into the northern Plains towards the weekend days.

THE COLDEST AIR OF THE WINTER SEASON FOR SOUTHERN CANADA AND PARTS OF THE NORTHERN U.S.

This pattern across North America is a typical weather setup when a major winter storm develops into the north-central Contiguous U.S., but also introduces a very advection of Arctic cold airmass in its wake. Therefore, southern Canada is forecast to experience much lower temperatures than have been recently observed.

The temperature anomaly will be particularly significant across the Alberta and Saskatchewan provinces starting Tuesday into Wednesday and Thursday. Extremely cold air will be gradually also spreading into Montana by Wednesday. This winter storm will deliver the coldest air mass of the season. 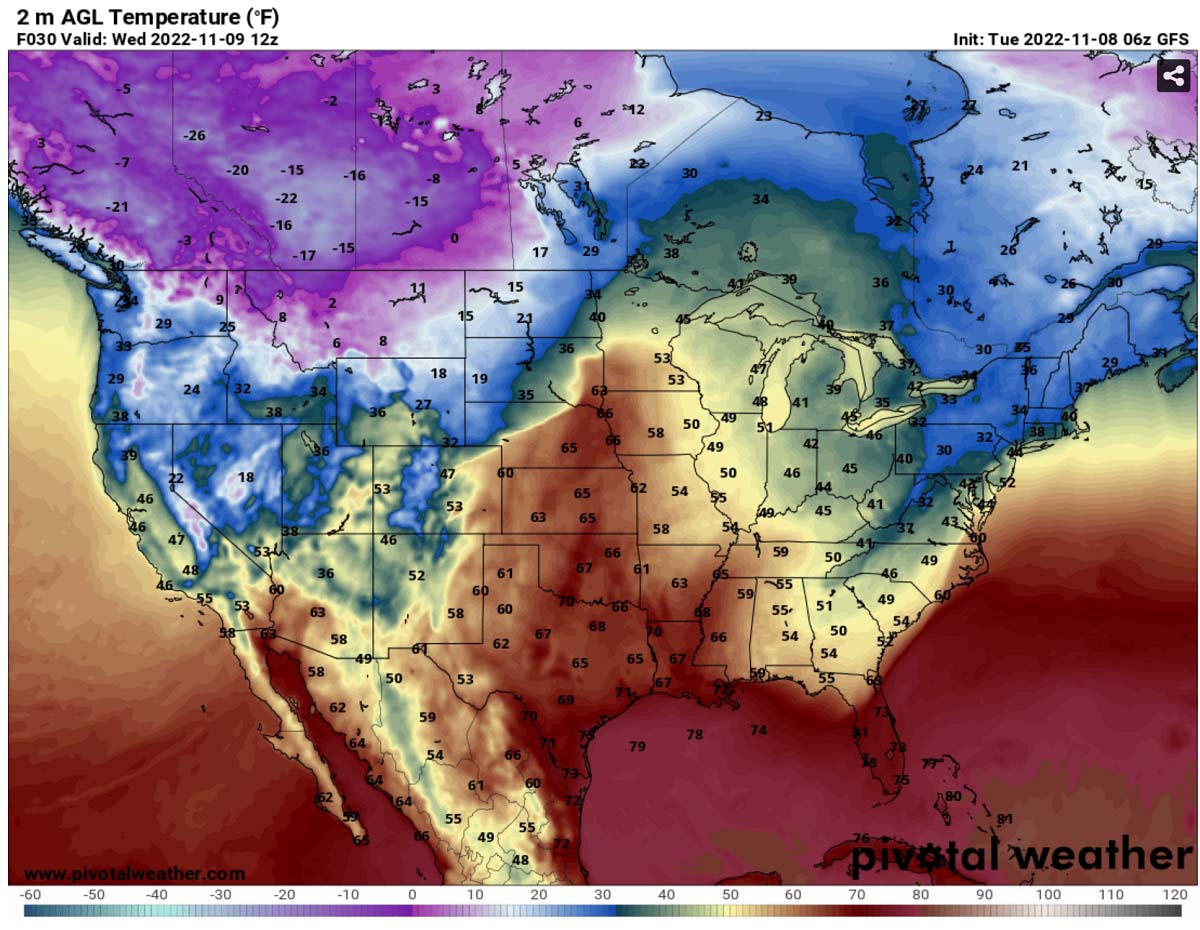 That is around 40 °F colder than normal for the region.

With the winter storm progressing further east on Thursday, the temperature contrast between the areas ahead of the cold front and in its wake will be pretty impressive. While temperatures will be near 25-30 degrees warmer than normal on the front end, those will be nearly 30 degrees colder on the other. 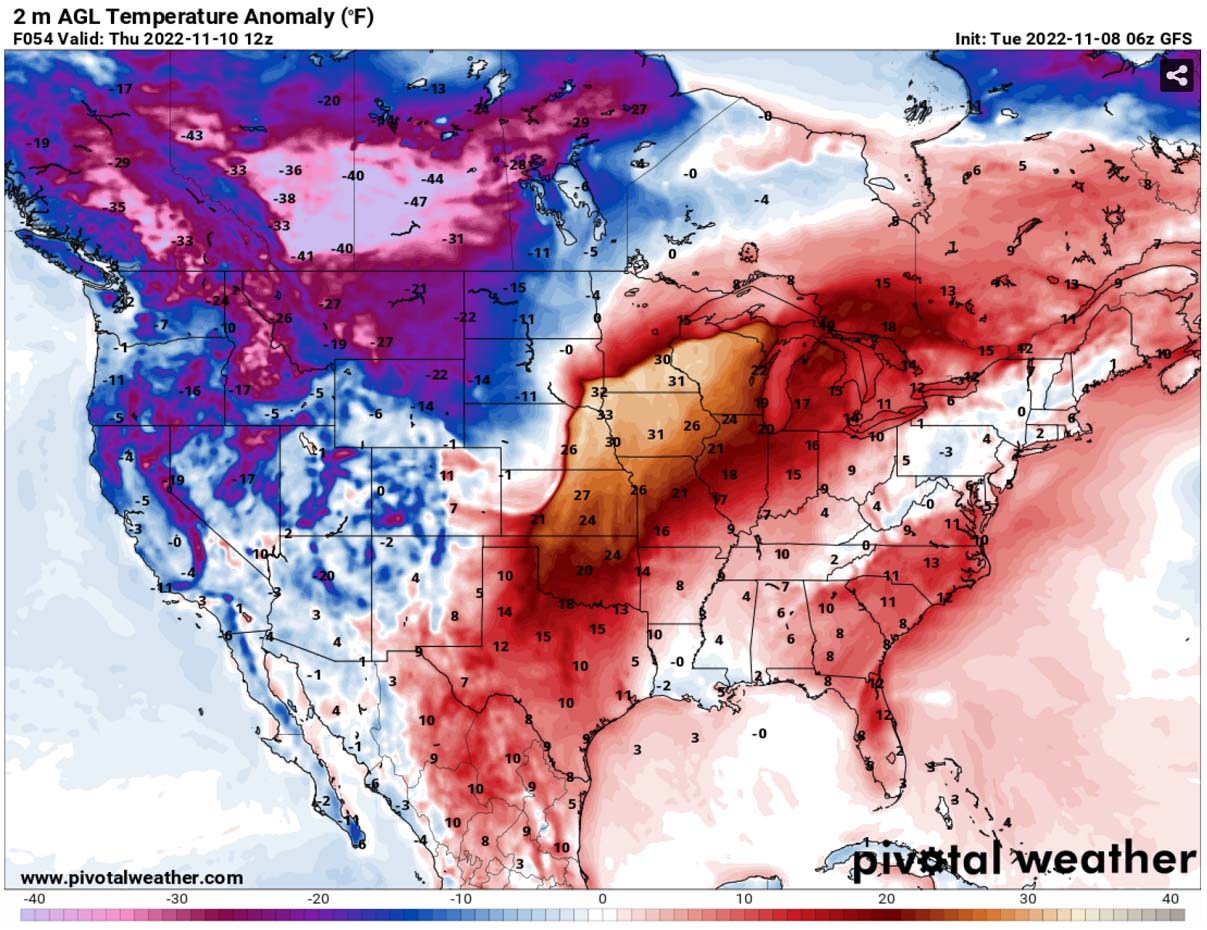 This can also hint us why the winds will be so significant and support severe blizzard conditions for the areas from western Dakotas to Minnesota.

These extremely low temperatures could also potentially challenge some daily record lows for the region across Montana into Alberta. Tuesday thru Friday are forecast to be the coldest days for Alberta and Saskatchewan, Canada. While Friday and especially Saturday will bring the most significant, even frigid cold into both Dakotas. Strong winds will result in extreme windchill temperatures.

WINTER STORM MOVES EAST TOWARDS THE WEEKEND, SPREADING COLD AIR INTO MIDWEST AND FARTHER TOWARDS THE EASTERN U.S.

The winter storm will mature towards the weekend, with a large closed cold upper low progressing east across the Great Lakes and central Canada. This is a secondary stage of the pattern evolving, developing a strong upper High over western Canada and Pacific Northwest. 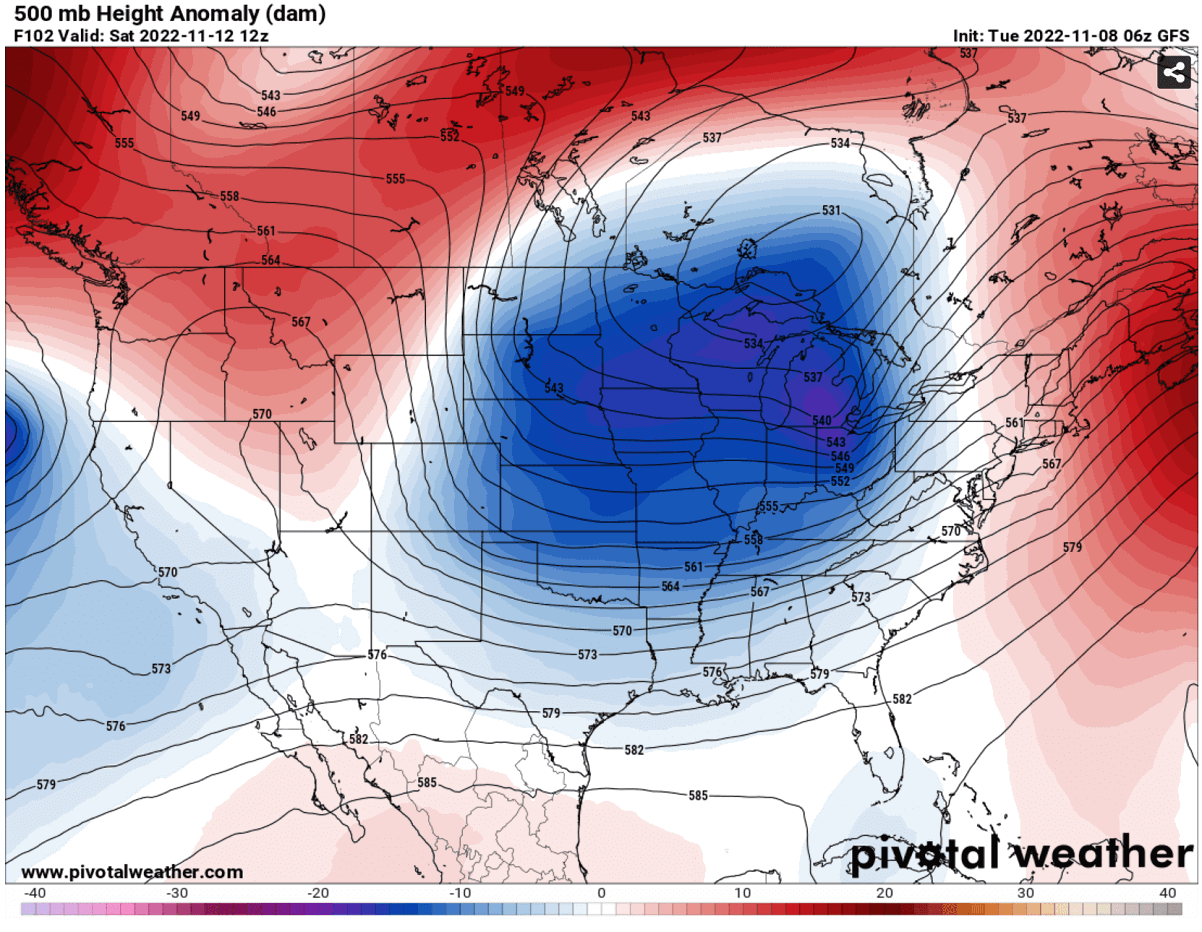 Thus, allowing the much colder air mass to move generally towards east-southeast in its wake. Gradually spreading across the Midwest towards the south-central Plains, Mississippi and Ohio Valleys towards the eastern United States over the weekend.

While the most significant Arctic cold temperature on Saturday will be over Dakotas, also Nebraska, Iowa and Kansas will experience 15-20 degrees colder temperatures than typically for mid-November. 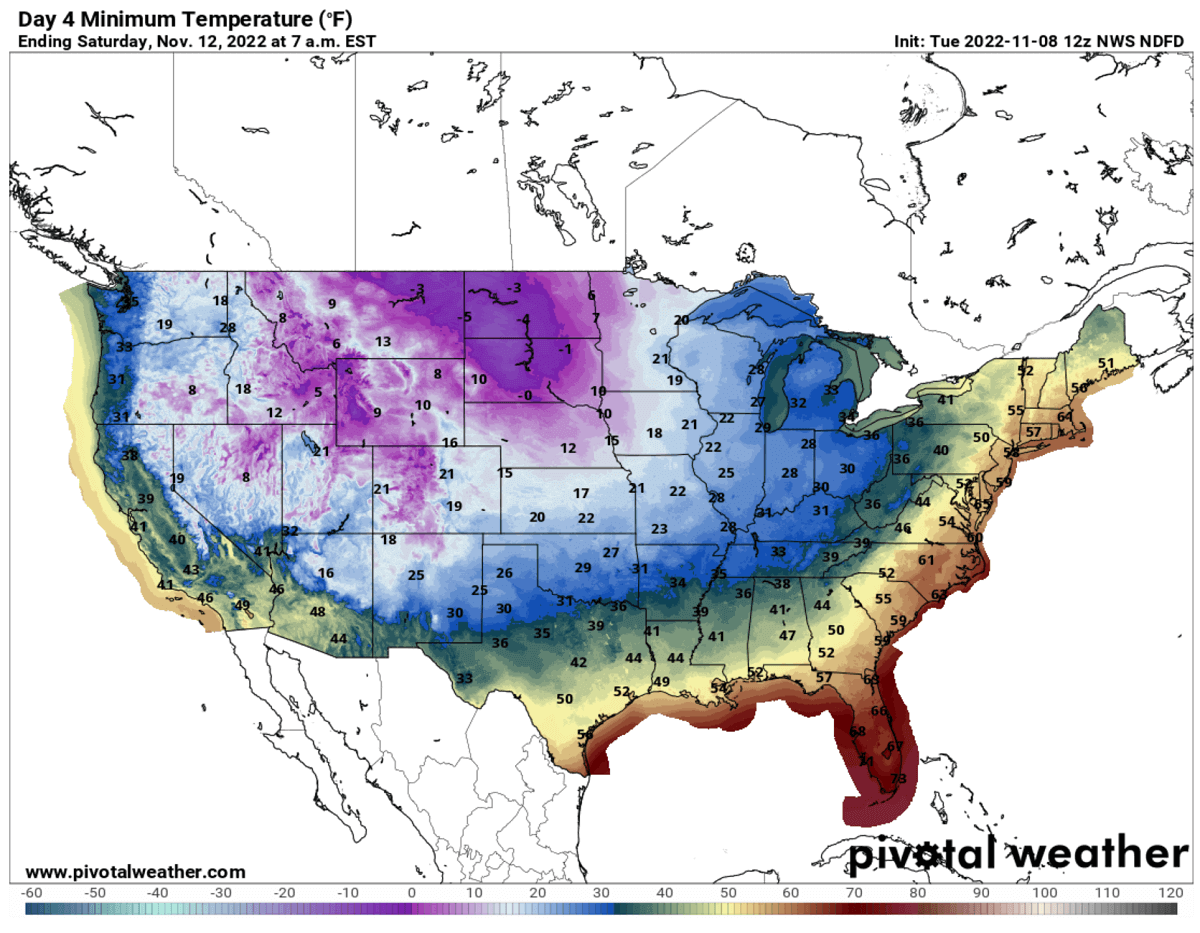 By Saturday afternoon and evening hours, much colder weather will also reach the South and Southeast U.S. Monday into Tuesday next week will be a cold day for many, with morning freezing temperatures as far south as south-central Texas, possibly also northern Louisiana and northern Mississippi.

Temperatures should gradually continue towards the East Coast as well, bringing temperatures much colder than are observed this week. Those are forecast to be around 15-20 degrees lower than normal as well. 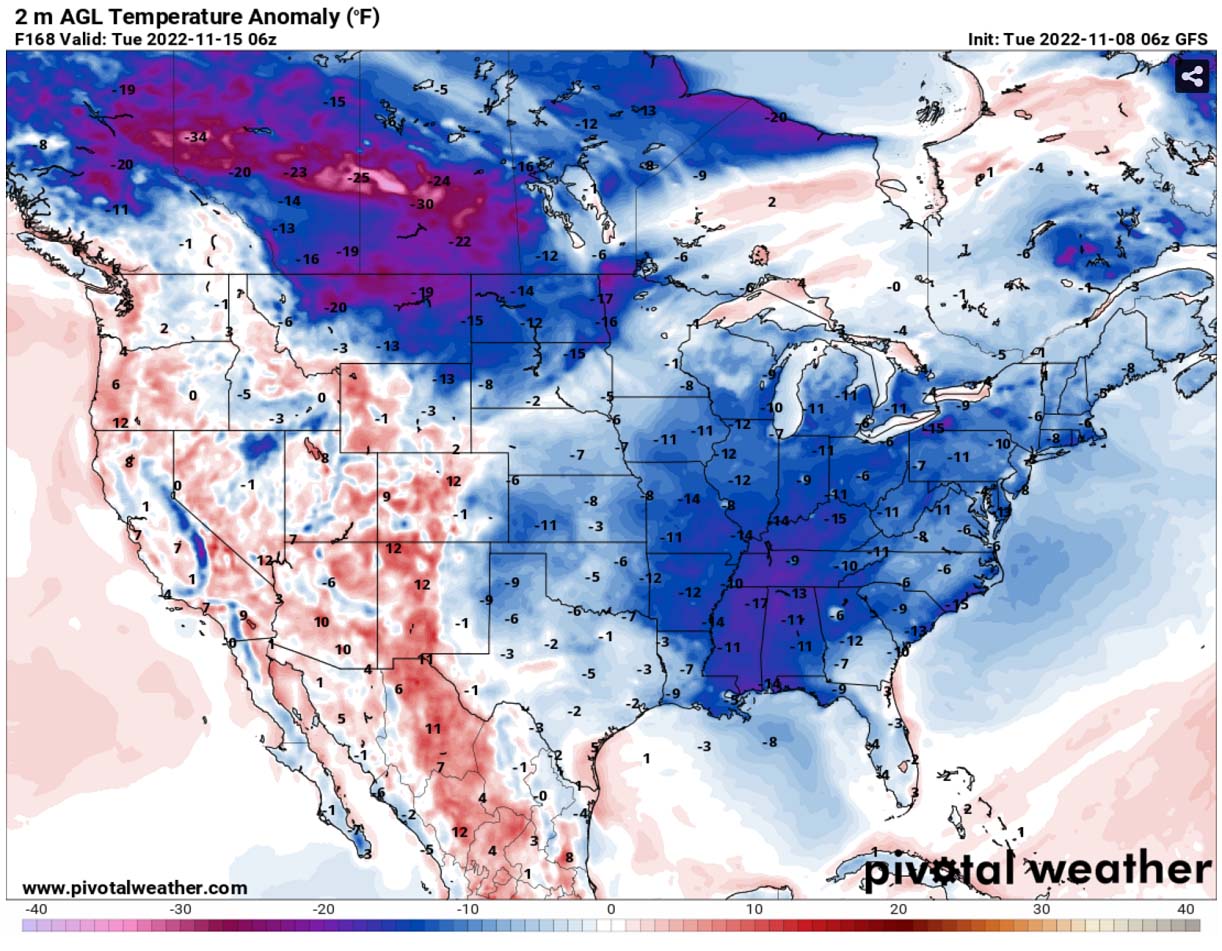 Farther north over western Canada, another and potentially even more significant outbreak of frigid cold airmass is seen on the chart above as well. That could be the next Arctic blast into the United States through mid-November.

Stay tuned for further updates on the developing patterns across North America in the coming weeks.

Interested in how the winter will be? Here is our most recent outlook for the upcoming months: