Just a week after Easter Sunday deadly tornado outbreak across the Southeast US, another dangerous pattern is developing this weekend. A new deep trough is moving across eastern Continental US and will introduce dangerous severe weather outbreak across central Louisiana, Mississippi, Alabama and Georgia tomorrow, on Sunday, Apr 19th. The potential is there for damaging winds, large hail and tornadoes, possibly even strong and destructive ones.

The overall pattern over North America indicates a deep trough over eastern Canada and the eastern half of CONUS with west-northwest flow across the Southeast US. At the surface, a secondary low will significantly deepen while traveling across the southern and Southeastern US on Sunday.

The surface warm front will be slowly advecting northward through Sunday, resulting in strongly unstable air mass to the south of it, overlapped with very strong deep-layer shear. Elevated storms will be likely forming along the warm front by early afternoon while cold front begins developing surface-based storms over Lousiana. With its progress further east, storms will organize into severe storms, including intense supercells with destructive winds, large hail, torrential rainfall, and tornadoes. There will probably be two rounds of storms. The first round will move through the late afternoon as widespread severe storms are possible over Mississippi and Alabama while the final round develops along the leading cold front in the evening, rapidly spreading east across the Southeast US. With the increasing shear (60-90 knots) and strong to extreme instability (even above 3000 J/kg), the potential is there for strong tornadoes as well. Especially from eastern Louisiana across central Mississippi and Alabama through late afternoon and evening hours. Ovenight to Monday, activity will be gradually moving east into Georgia as well. Storms will likely merge into large convective clusters (MCS) as low-level jet and helicity increase in the evening, while extremely unstable air mass from high dewpoints remain in place south of the warm front. 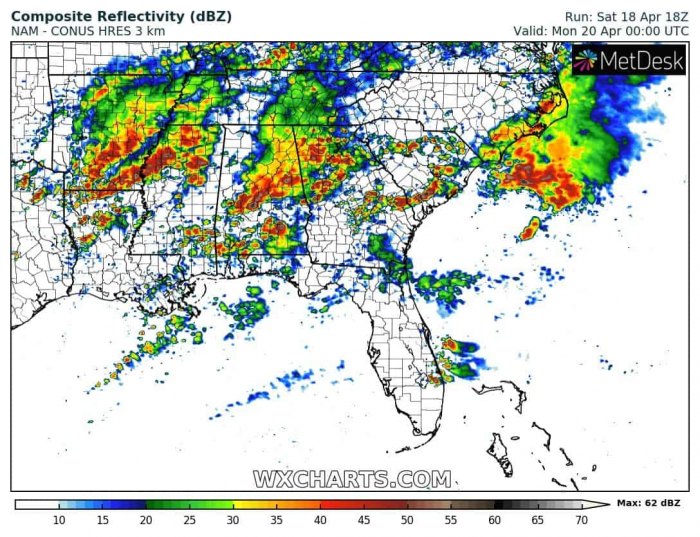 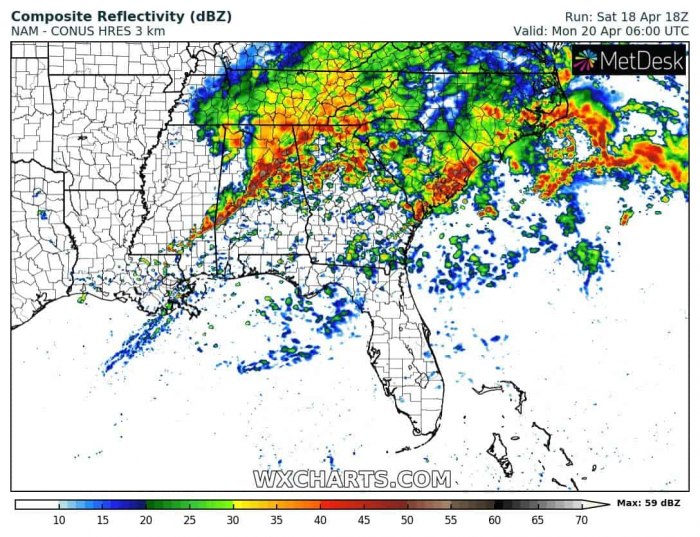 Here is an Infrared satellite simulation from the afternoon into night hours. We can see several large storm clusters, one over Louisiana by mid afternoon moving across Mississippi and Alabama in the late afternoon, followed by another large storm complex with the robust storm activity along the cold front in the evening and night hours.

Widespread storm activity and the large clusters will result in an extreme amount of rainfall near the trailing warm front and then cold frontal activity. A broad swath of 4-8 inches is likely from eastern Louisiana across central Mississippi and Alabama into northern Georgia, leading to dangerous flash floods! 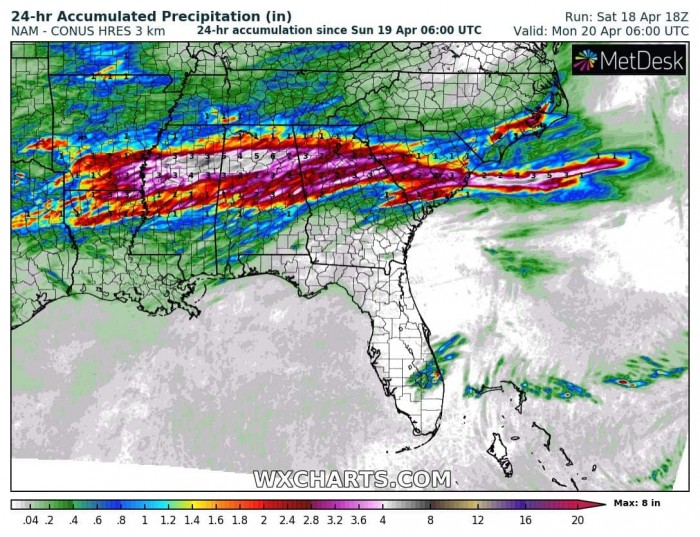 This could become another destructive severe weather event, even deadly by potentially strong tornadoes. Stay alert for dangerous conditions and follow up warnings from your local NWS offices.