A tornado season is usually ramping up across the southern United States during early April. This Sunday – the Easter Day – it is becoming increasingly likely a severe weather and tornado outbreak across the lower Mississippi valley, Southeast US and Tennessee valley. A rather volatile setup could result in numerous tornadoes, potentially even significant long-tracked tornadoes, as well as widespread severe winds and very large hail. Some major cities are in the risk area, e.g. Jackson (MS), Birmingham (AL) and Tuscaloosa (AL).

What is shaping up on the forecast models is a pretty dangerous weather pattern with a very deep trough across the northern US, and a short-wave trough moving into the southeast US (Dixie Alley). A powerful southwesterly jet stream is rounding the base of the trough. At the surface, a relatively strong surface low is moving from the central Plains across the Mississippi valley into Tennessee valley while deepening into the mid 980s mbar by Sunday afternoon. This delivers a significant increase in the dynamics with very strong deep-layer shear and moisture advection across the Southeast US. 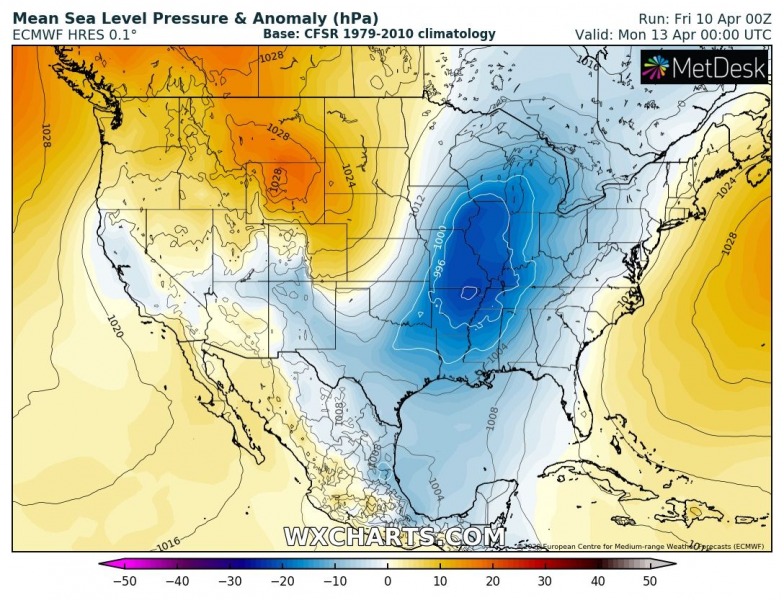 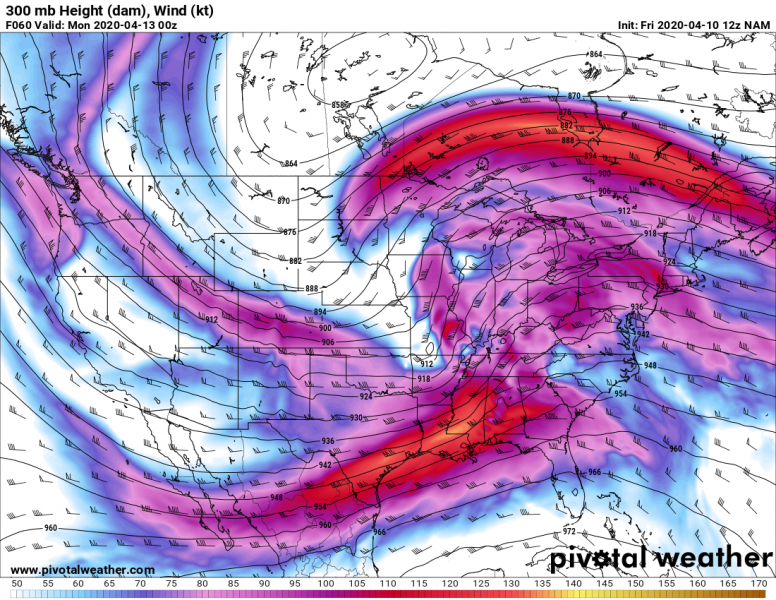 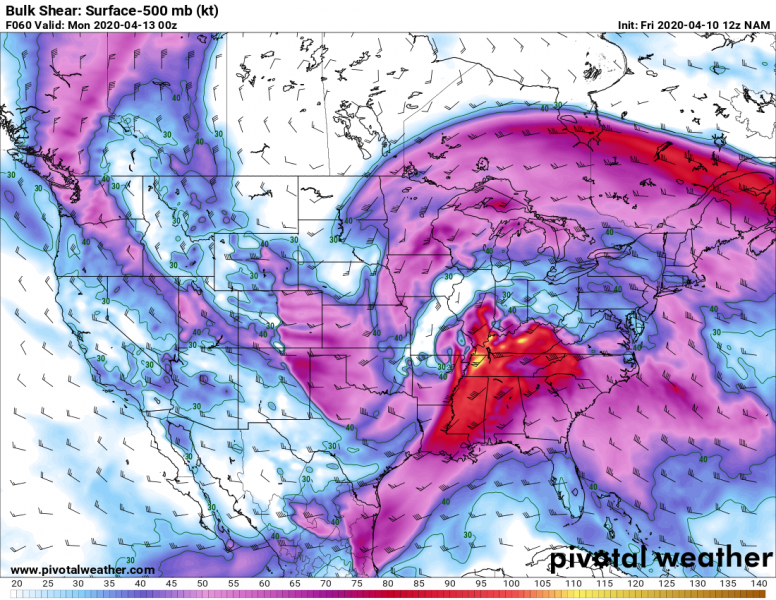 Here is the 3-hour sequence for Sunday from 1 pm through 7 pm across the Southeast US. Strong southerly moisture advection results in widespread elevated storms in the early-mid afternoon hours while the frontal boundary becomes the main focus for dangerous surface-based storms from the west – Arkansas, Louisiana into Mississippi and further east-northeast into Tennessee and Alabama through the late afternoon and evening hours. A strongly unstable airmass, coupled with increasing deep and low-level shear/helicity will develop a volatile environment with scattered to widespread severe storms (supercells) ahead of the moving front. These will support all kinds of severe weather, including severe winds, tornadoes, very large hail, and flash floods. The strengthening wind shear should also support long-lived supercells and tornadoes. An intense squall-line could potentially develop along the leading cold front, introducing destructive winds. 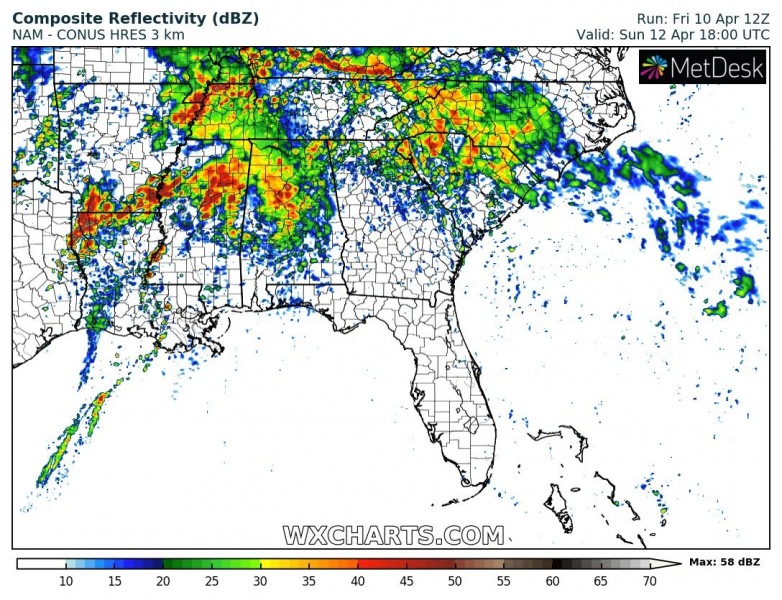 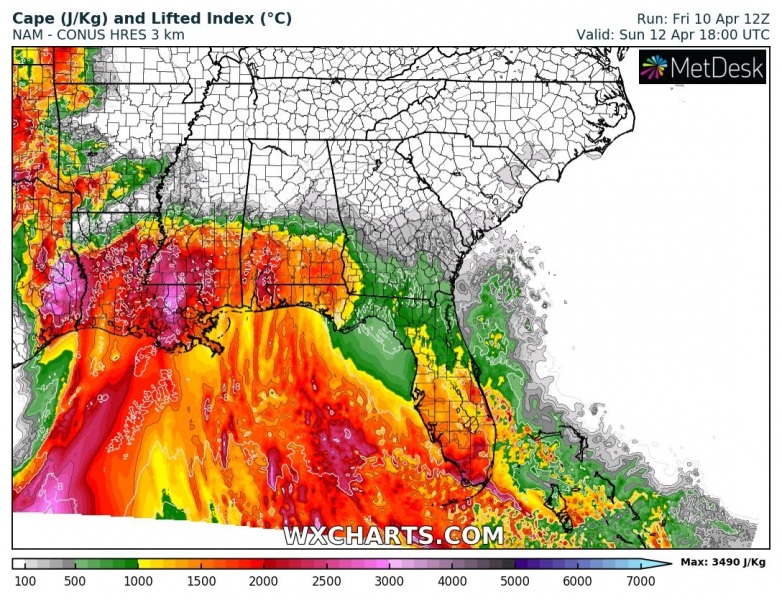 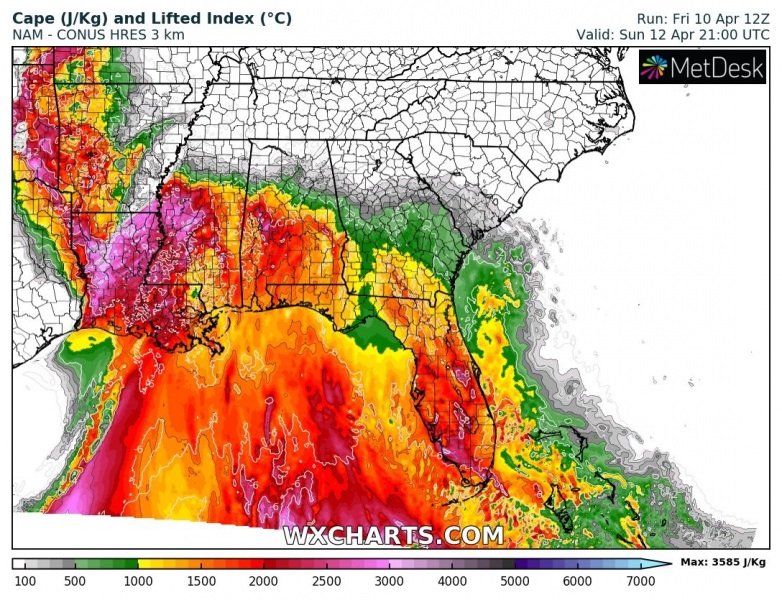 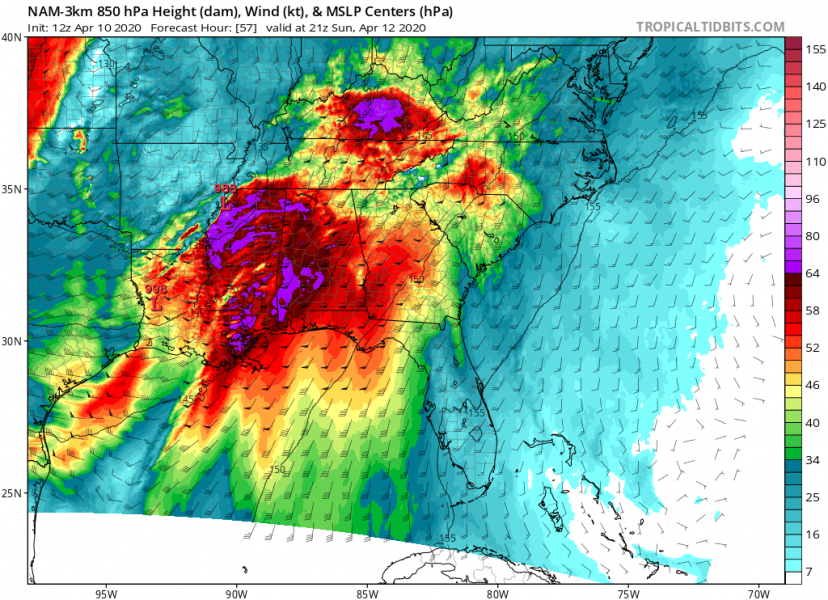 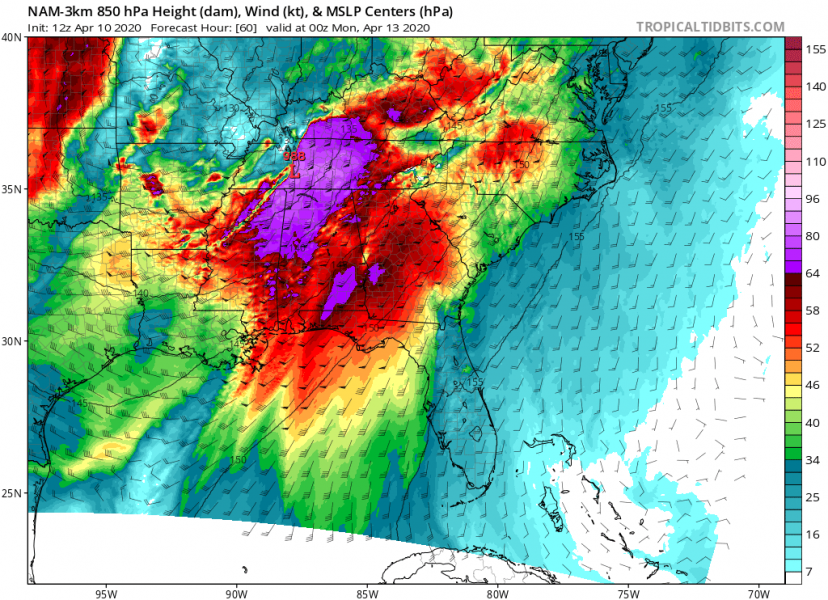 The deep-layer shear will be particularly strong in the evening hours as the low-level jet increases significantly. This will create an extremely dangerous situation across the Mississippi and northern Alabama where an overlap of very strong shear, helicity, and strongly unstable airmass will occur. There are higher probabilities for a widespread severe weather outbreak there, including numerous tornadoes. A volatile environment should support significant long-lived severe storms, moving into populated areas. Attached is the outlook by NOAA Storm Prediction Center (SPC) with a MODERATE risk issued. And the forecast sounding for northern Mississippi on Sunday late afternoon – a particularly dangerous situation, supporting of significant tornadoes with more than 90 knots of shear and 500+ m^2/s^2 storm-relative helicity. Such an environment could result in destructive and deadly tornadoes! Also widespread wind damage.

There is a potential of the outlook upgrade into HIGH RISK on the next updates. 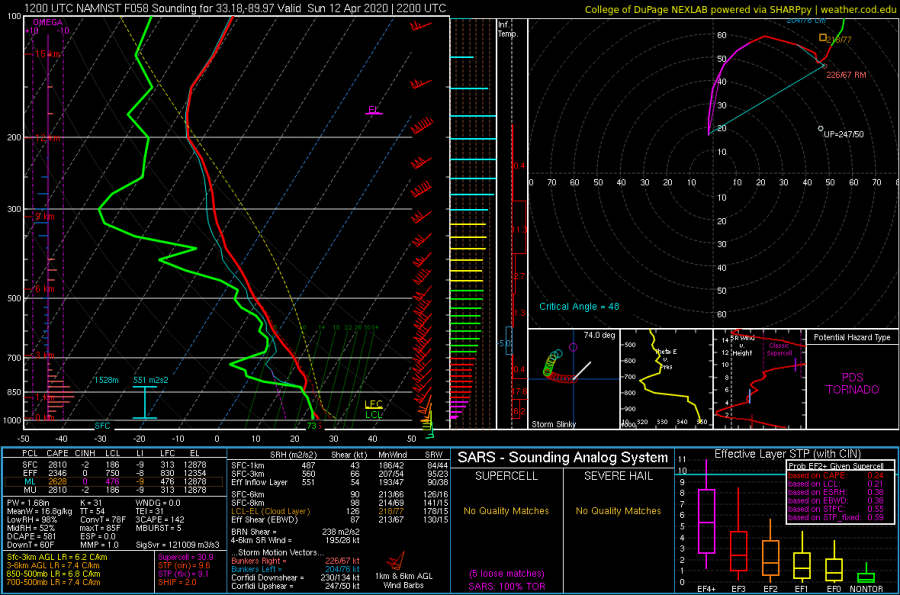 Quite a high amount of rainfall is likely to accumulate with the widespread storm activity and training storm clusters as well, potentially reaching 5-7 inches (120-180 mm) in about 24 hours period. This should lead in dangerous flash floods threat in some areas, e.g. southern Arkansas, northern Mississippi, and Alabama into Tennessee. 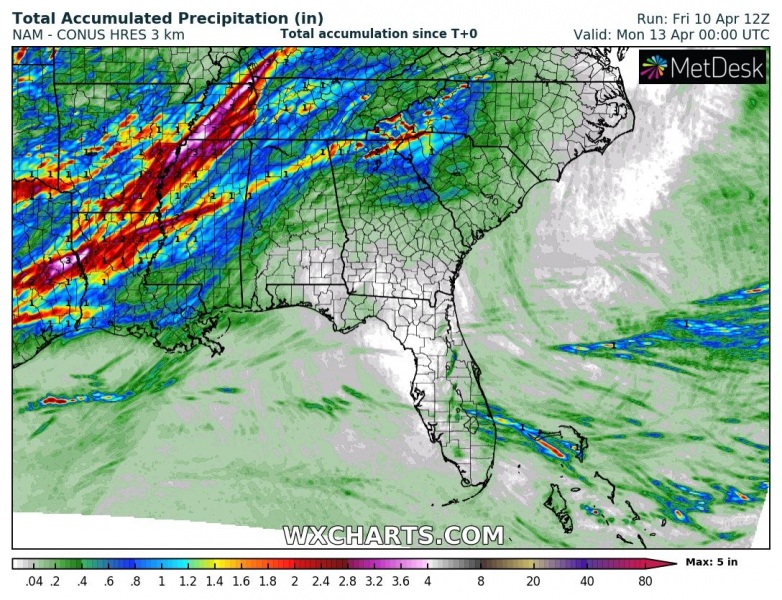 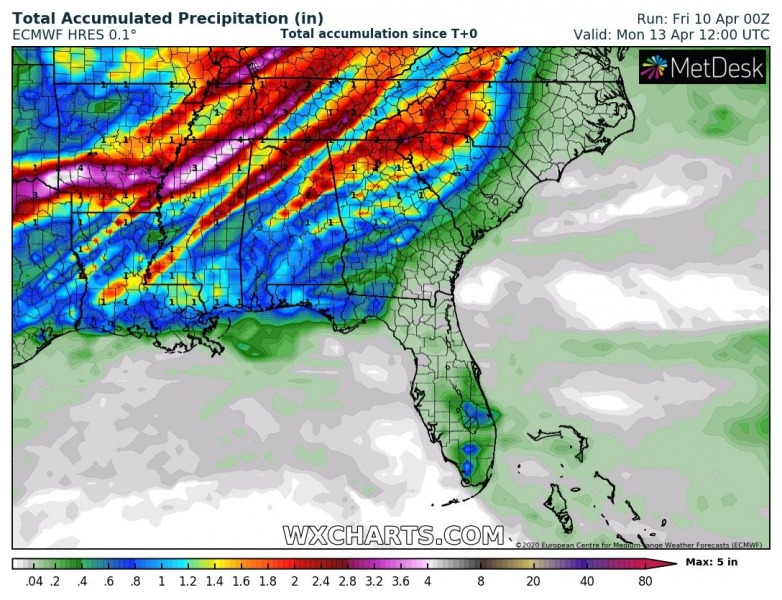 Stay alert for this potentially life-threatening situation developing for Easter Day 2020 and follow the warnings from your local NWS office over the weekend! Stay safe!

Behind the severe weather outbreak, an intense Arctic cold outbreak spreads across the United States: