Severe drought is a rather a common occurrence in Chile, but the current one is setting a record-breaking longevity, entering its tenth year. The river flows and reservoirs running dry due to drought worsening, being at their historically low levels. Years of resource exploitation and lax legislation have resulted in most reservoirs in the central parts of the country running dry. Now, there are more than 400,000 families and nearly 1.5 million people approximately, whose water supply depends on tanker truck deliveries. Animals are dying due to lack of available water.

According to the paleoclimatologists who look for clues of past climate conditions in tree rings, the estimation is that no drought in Chile’s modern meteorological record (since 1915) has lasted longer. They are estimating that the last ‘megadrought’ of this scale probably occurred in this region more than 1000 years ago, explained René D. Garreaud, a scientist at the University of Chile.

Rainfall amounts lately have been very poor, actually on the extremely low values! Over the last 10 years (since 2010), precipitation in central Chile has been below normal each year by an average of 20-45 %. Around Santiago, the Chile’s capital, the lack of rain has been particularly extreme. Only 10-20 % of normal rainfall has been recorded between 2014 and 2019. And in 2019, the greater Santiago area and in Valparaiso, rainfall was almost 80 % below the previous record low. In the northern region of Coquimbo, it was even down by 90 %. While drought is now entering its tenth year, the situation is worsening and is critical. 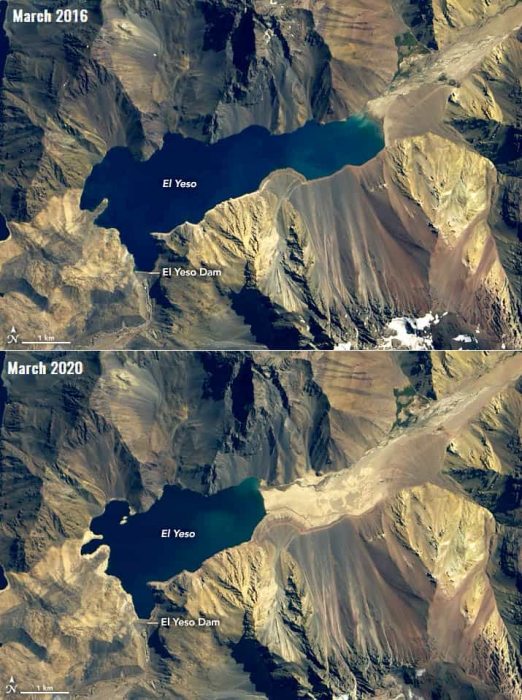 Graphics: Both images were acquired by the Operational Land Imager (OLI) on Landsat 8 / NASA

Reservoirs are normally filled with the water resulting from the snow on nearby mountains which indeed melts during the spring and summer seasons. Correlated with the significant decline in precipitation, there is also much less snow in the mountains. As we can also see on the images, the high peaks to the south and east, which would normally be snow-covered, are now without snow. And future trends are showing nothing positive in the rain/water improvement, unfortunately.

#Chile is going through a historic drought, which makes people more vulnerable to coronavirus. As people who are able to get away flee the country, water stress remains a top concern for many who are left. pic.twitter.com/1ThcVgoUl8