A massive winter storm Xylia developing over the Rockies and High Plains will impact Colorado, Wyoming, and Nebraska with historic 3-6 feet snow tonight through Sunday. Travels will be disrupted or impossible, damage to trees and powerlines likely. Further south, a Severe Weather Outbreak with damaging tornadoes and large hail is expected across Texas Panhandle and western Oklahoma on Saturday.

Soon after a warm period with above-normal record high temperatures across the United States recently, a major winter storm is developing. TWC has named it Xylia, given its potential historic impact for Colorado, Wyoming, and Nebraska this weekend. 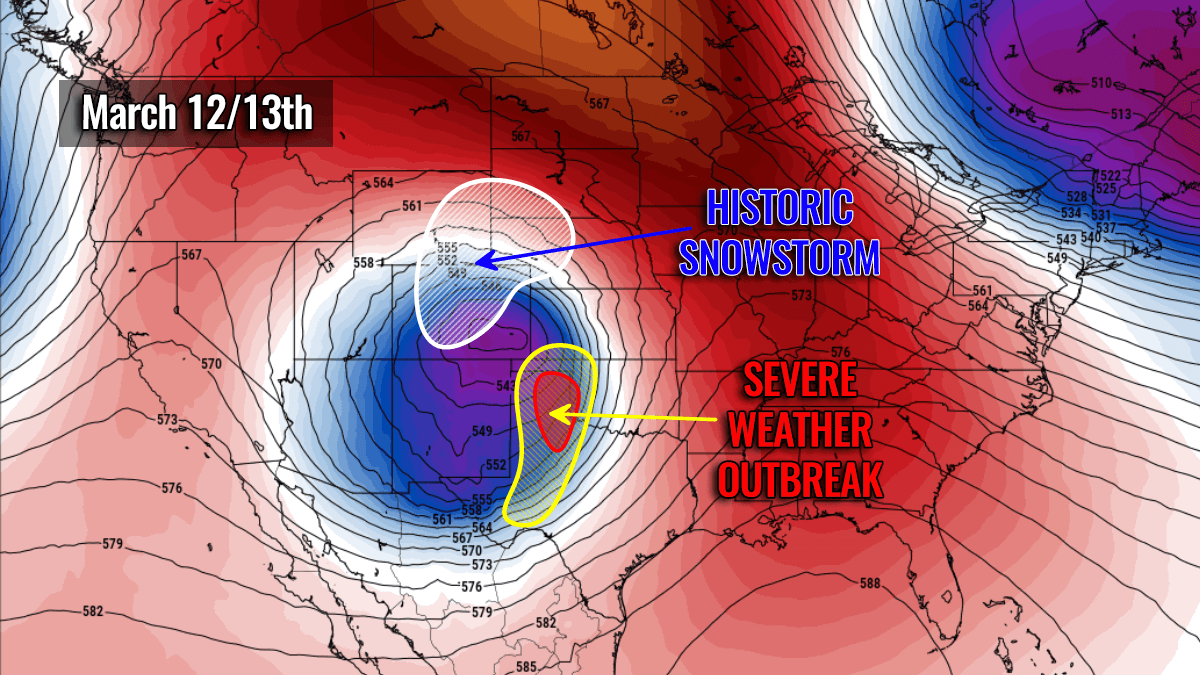 The first weeks of the meteorological spring are often very dynamic, as the increasing warming across the south is battling with remaining cold blasts from the north. March is surely the month for a strongly dynamic pattern across the central parts of the United States.

The High Plains, with Colorado, Wyoming, and Nebraska, in particular, are in for a major winter storm Xylia impacting with historic snow this weekend. Weather models are is a good agreement a massive 3-6 feet (1-2 meters) of snow is likely from the Front Range of the Rocky Mountains to Nebraska Sandhills and the Black Hills through Sunday night.

Winter Storm Warnings, Watches, and Advisories are now in effect for northern Colorado and east-central Wyoming ahead of the strengthening snow storm Xylia. Heavy wet snow will likely lead to nearly impossible travels in some areas along I-25 corridor between Denver urban area to Cheyenne. 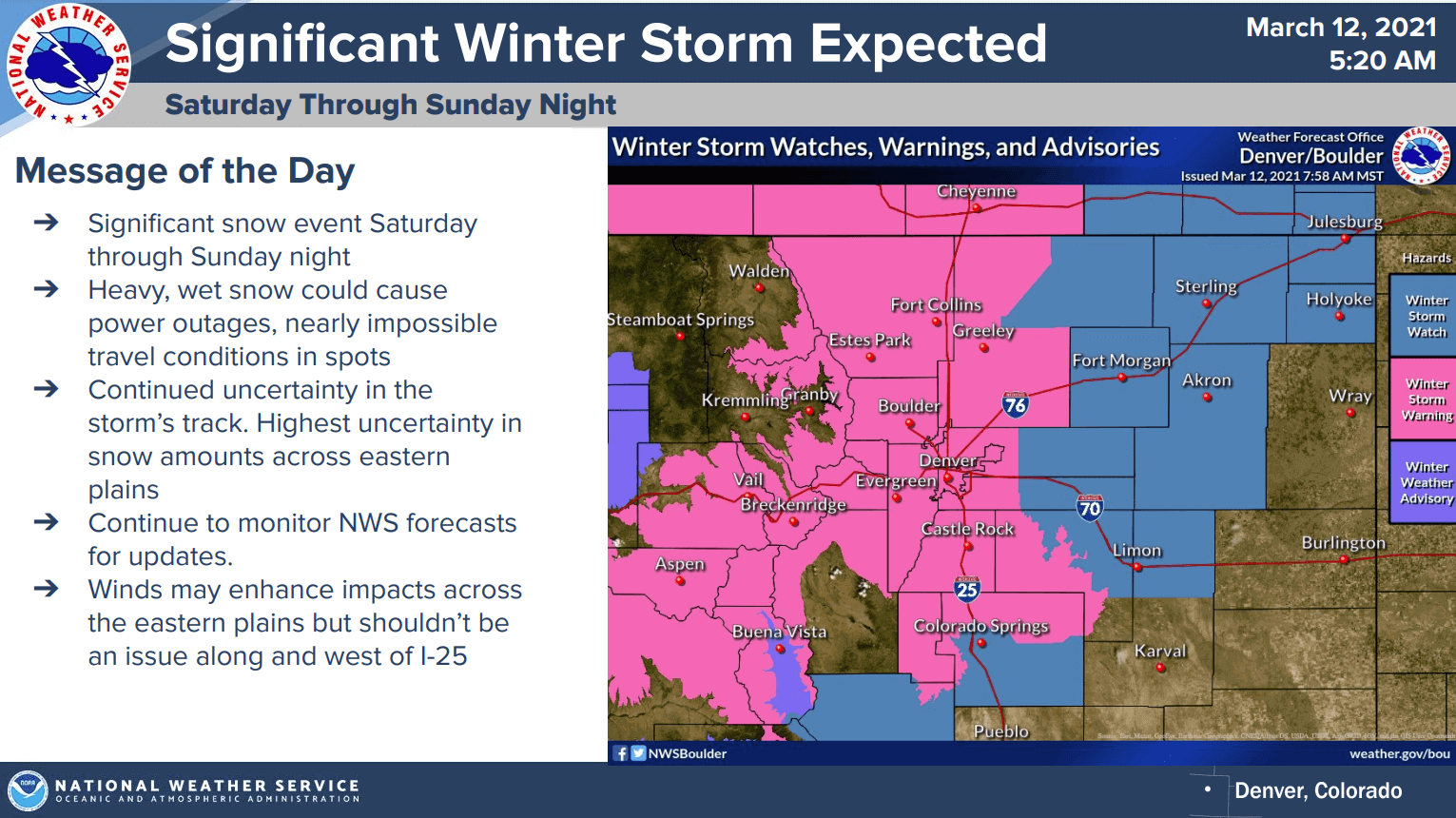 Both the state of Colorado and Wyoming have a history of major winter storm events in early spring. Actually, the statistic says that the highest amounts of snow are often observed in March. While the winter weather is gradually departing back north, the rapidly warming south is sparkling weather systems when frontal waves emerge from the West.

This Friday, a large upper-level low is strengthening/deepening over the Rockies, rising the concerns for a historic snowstorm for the High Plains over the next two days. A slow-moving system is clearly visible on the satellite imagery today. Attached below is an animation of various satellite channels:

The weather maps brought out the memories to the historical March 2003 snowstorm over the same area, with some great similarities with the upcoming event. The 2003 Denver blizzard snowstorm was an exceptional and historic event, with record snow by all means across the Front Range of the Rockies.

The upcoming snowstorm Xylia looks nothing less than a major snow event with potentially multiple feet of snow across northeast Colorado, southeast Wyoming, western Nebraska, and the Black Hills of southwest South Dakota. Definitely, a very dangerous winter storm to monitor closely and be prepared for. 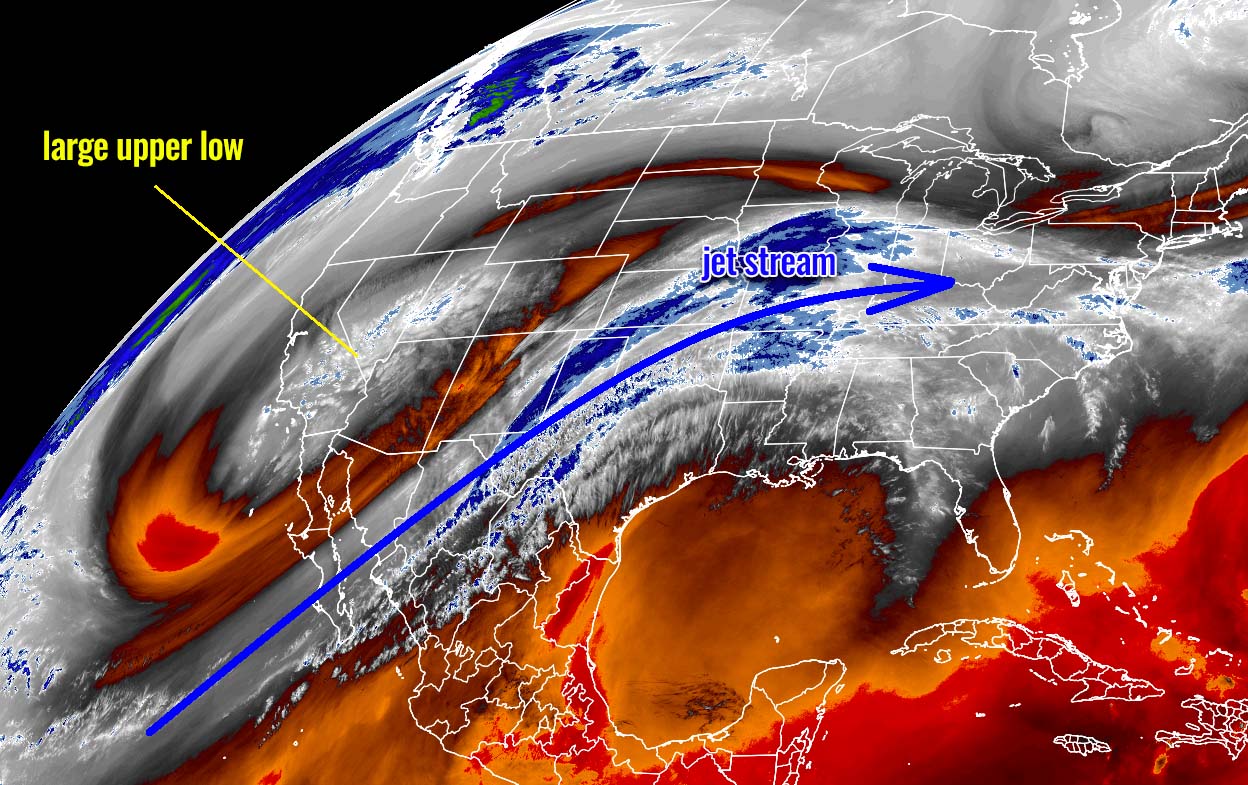 A powerful upper-level jet stream also pumps a lot of very warm and moist air mass from the Gulf of Mexico into the Southern Plains. Significant thunderstorms will be possible that could lead to a Severe Weather Outbreak across Oklahoma and Texas on Saturday. While the thunderstorms then spread also into Arkansas and Missouri by Sunday.

Looking over the weather pattern emerging across the Contiguous US this weekend hints at a very similar setup to match with the historic March 2003 snowstorm. The 500 mbar chart below depicts a large and very deep upper low over the southern Rockies, with its center over New Mexico and Colorado. Both events have it almost in the same area, so we could be facing similar historic snow coming up.

Such a setup normally means that a massive snowstorm develops along the eastern slopes of the Rocky Mountains, fueled by a strong upslope flow resulting in high moisture transport from the Plains towards the High Plains of Colorado, Wyoming, and Nebraska Sandhills.

The mid-March 2003 event was one of the worst snow blizzards over the last 150 years (records began in 1872) that struck metro Denver, Colorado. Heavy wet snow accumulating to around 3 feet in the area (31.8 inches in Denver itself) and up to more than 7 feet in the foothills brought a transportation collapse.

This was the second-biggest snow event ever to hit the Mile High City on record. The only greater event was the historic snowstorm at the beginning of December 1913, with 45.7 inches of snow recorded in just five days period.

Tens of roofs of homes and businesses were damaged or destroyed. The heavy snow also brought hundreds of downed trees, branches, and power lines. With snowdrifts to 6 feet (2 meters) in parts of the Denver Metro area as heavy snow was accompanied by sustained 30-35 mph north winds. Up to 135.000 people lost power during this historic snowstorm, and it took several days for power to be restored in some areas.

Higher across the foothills, snowfall amounts were nearly tripled the lower elevation accumulations. About 3 feet to more than 7 feet was locally reported, with some of the most impressive storm totals of 87.5 inches (222 cm) atop Fritz Peak and in Rollinsville, 83 inches at Cabin Creek, and 74 inches near Bergen Park.

The trigger for the upcoming winter storm Xylia is a deep upper low, emerging over the Rockies this weekend. The trajectory of the low is a rather typical track for major and potentially historic winter storms and snow events for the High Plains and the central Rockies. The low arrived from Arizona and is now turning northeast across New Mexico into Colorado, with a powerful jet stream spreading across the South Plains. 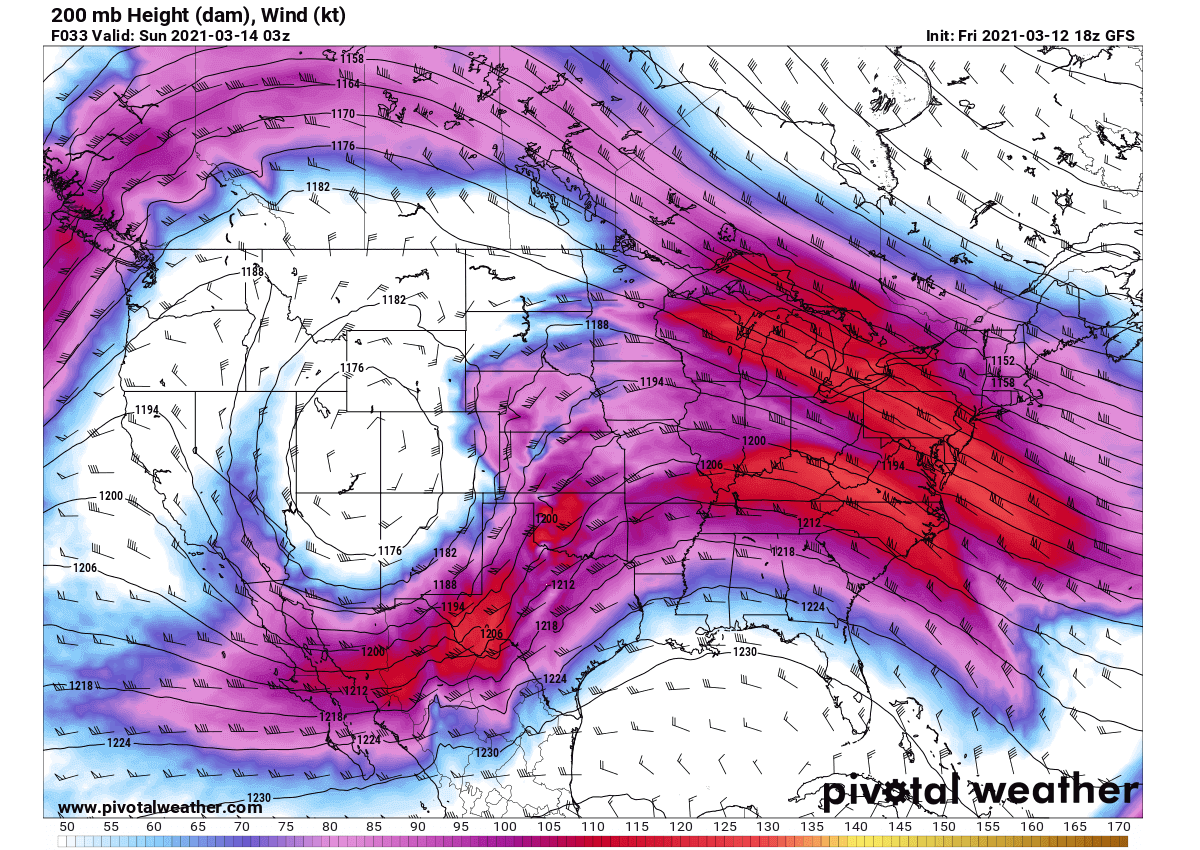 The upper low tracks across the Rockies this weekend and combines with the upper High and its associated surface high-pressure system strengthening across the northern Plains and Great Lakes. In other words, this means that the general flow turns east while intensifying towards the High Plains. Developing heavy snow towards the Front Range of the Rocky Mountains.

Under the low, a weak Lee surface cyclone forms over the southern High Plains, so the general flow converges towards the Front Range. This creates a basically near-ideal weather scenario for very heavy snow over the area. The low will be gradually drifting north over the weekend and the snowfall will spread across Wyoming, western Nebraska, and towards Blank Hills as well. 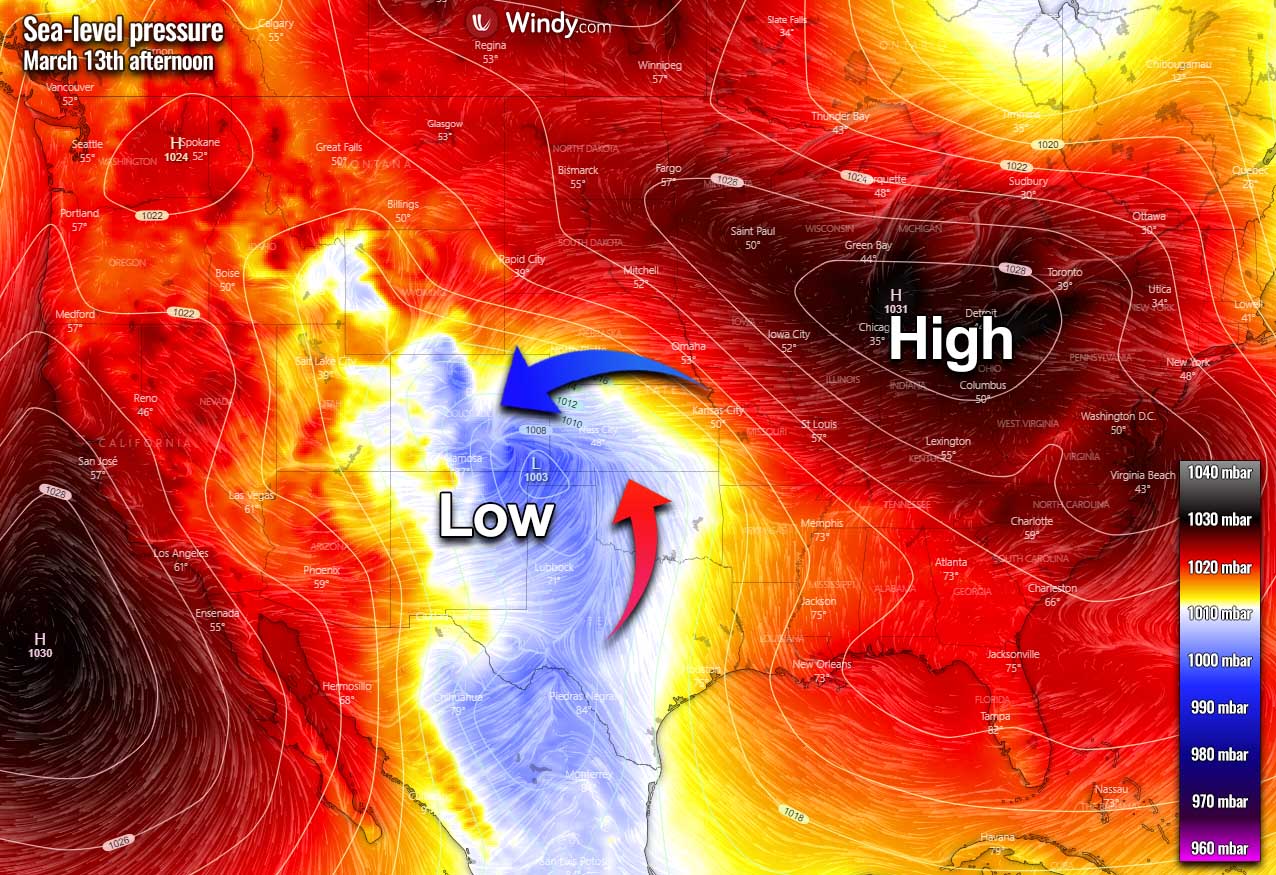 The general position of the low will lead to the enhanced low-level winds across the Plains, meaning *huge* moisture is transported towards the higher terrain further west across the Front Range of the Rockies. It seems that the worst part of the snowstorm to hit western Nebraska, southeast Wyoming, and northeast Colorado. A rather stationary low will support persistent heavy to locally extreme snowfall from late Friday through Sunday afternoon. 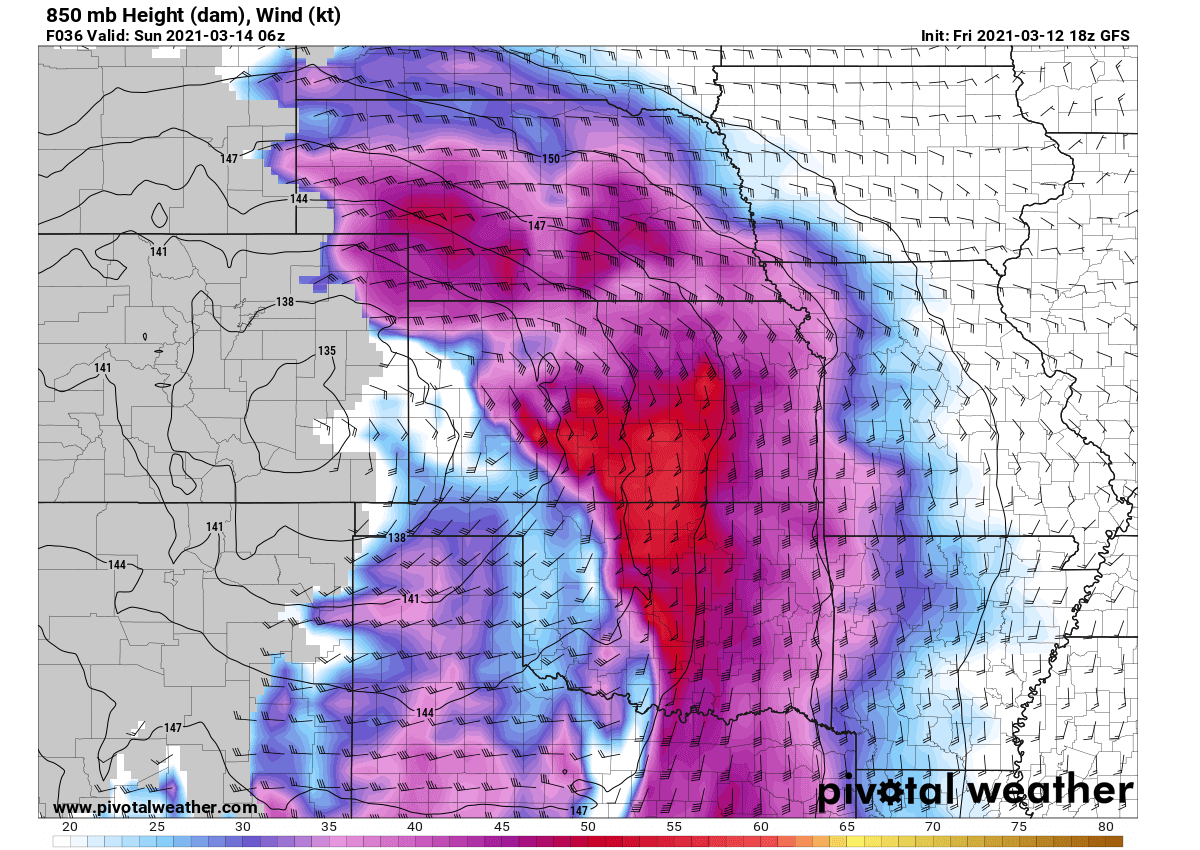 Snow will be intensifying over the Colorado Foothills, Front Range Mountains and gradually turn to (very) heavy snow tonight (Friday night), and continue through Saturday and Sunday. The greatest concern is the extreme amount of snow forecast as it will likely lead to almost impossible travels and damaging heavy wet snow to trees and powerlines.

There is still a high chance that a significant amount of snow will also develop across the urban corridor, including the Denver metro and the Colorado foothills. The latest forecast discussion warnings by the National Weather Service in Cheyenne, Wyoming and Boulder, Colorado hint at a potentially historic snowstorm as Winter Storm Xylia peaks on Saturday.

High transportation impacts and travel disruptions are expected, with almost impossible travels starting Saturday morning and continue until Sunday night. The worst weather conditions are likely to develop along the Interstates I-25, I-70, and I-80 in the High Plains and the Front Range with up to 2 feet of snow possible across southern Wyoming and northern Colorado.

Many roads may become impassable and could be closed this weekend. Especially across the mountains to the immediate west of Interstate I-25 where even more than 3 feet of snow could accumulate by Sunday night. 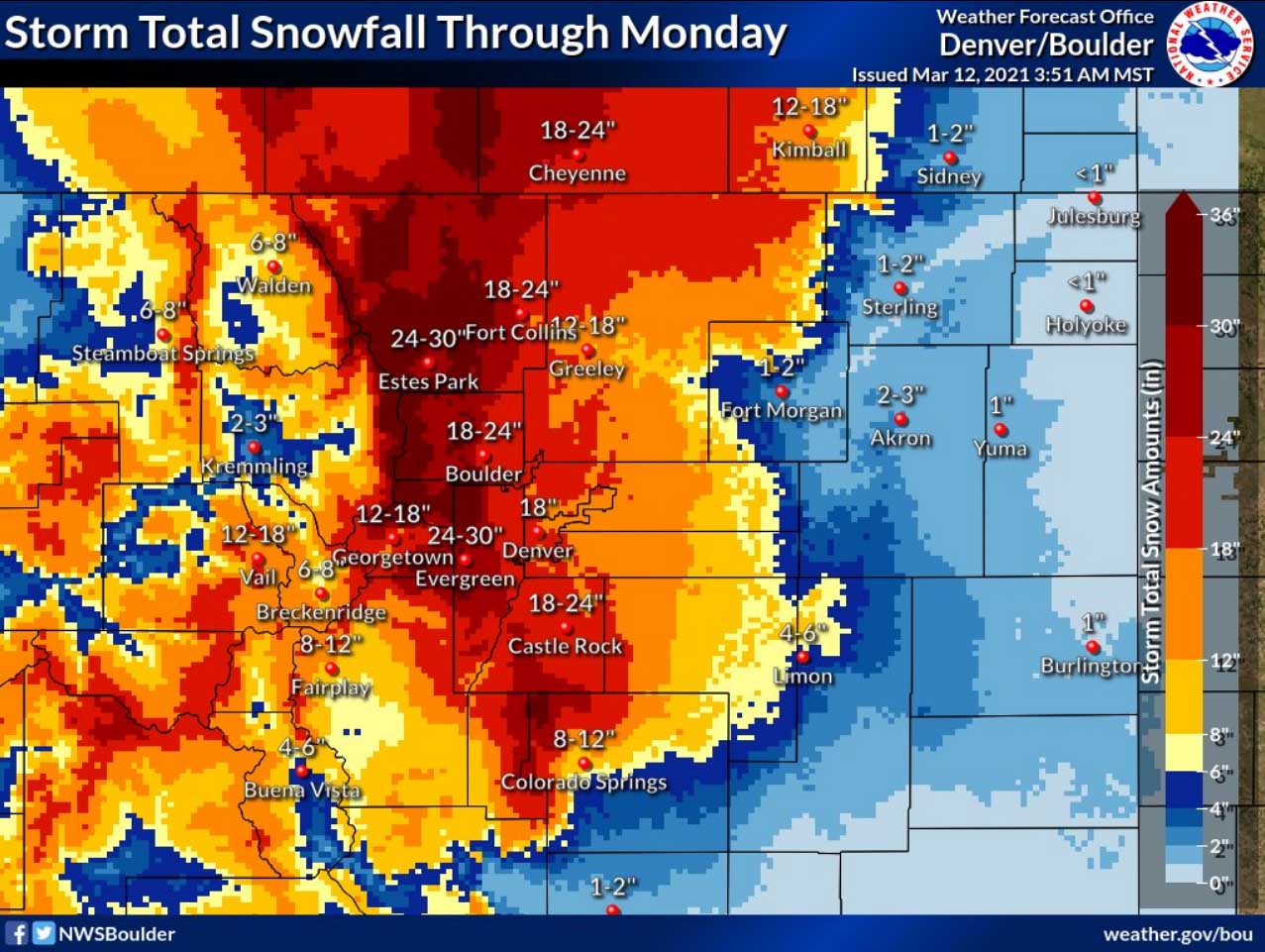 If you plan to travel into these areas, you might want to consider changing your plans due to this major Winter Storm Xylia snow event. You might be impacted by very dangerous and life-threatening conditions, and risk being stranded in deep snowdrifts and blizzard conditions with near-zero visibility.

While the Winter Storm Xylia brings a potentially historic snowstorm across central High Plains, the very warm and moist air mass from the Gulf of Mexico is also spreading across the Southern Plains. There is an increasing potential for severe weather outbreak across parts of Texas and Oklahoma on Saturday.

The Storm Prediction Center has issued an ENHANCED RISK of severe thunderstorms from the Eastern Texas Panhandle into western Oklahoma and northwest Texas.

Scattered severe thunderstorms are expected across the Oklahoma and Texas Panhandles, northwest Texas, and western Oklahoma on Saturday. The greatest severe threat is expected from mid-afternoon through the early evening hours. A few tornadoes, including the possibility of a strong tornado, and very large hail will be the primary hazards, with damaging wind gusts possible as well.

The first round of thunderstorms will first develop along the drying/front across the Panhandles tonight into Saturday morning. Then, a severe threat re-intensifies on Saturday as the low strengthens. 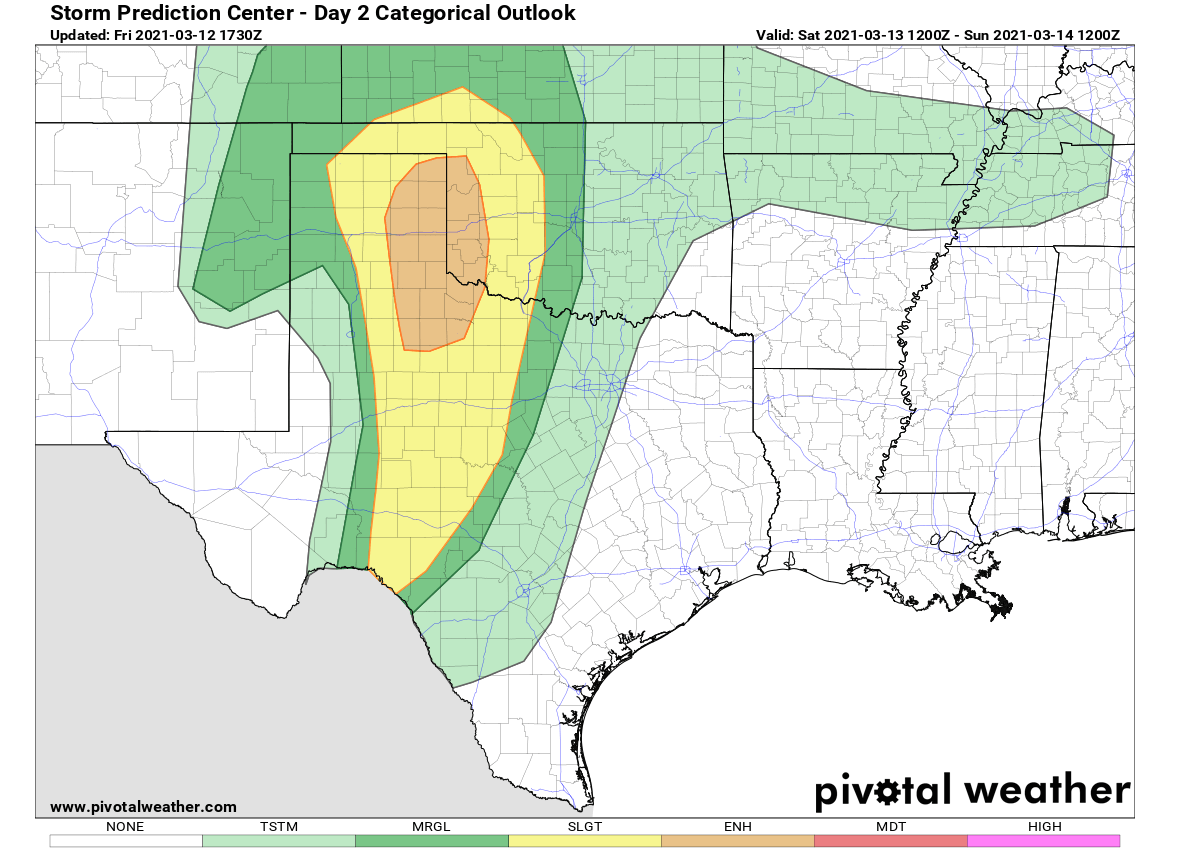 Moderate instability combined with an effective shear of 50-70 knots across the warm sector will be more than sufficient to support organized severe thunderstorms. Initial development will likely evolve into discrete or semi-discrete supercells, with an initial threat of large hail (potentially significant).

However, given the potential for at least a few hours of discrete supercell activity within a very favorable kinematic environment, SPC has opted to include an Enhanced Risk upgrade driven by the potential for strong tornadoes and very large hail.

A dangerous amount of rain is likely across southern Missouri, with 4-6 inches possible until Sunday. Persistent heavy rain could locally trigger flooding.

A major snowstorm with 3-6 feet of snow will hit the High Plains, including Denver, Cheyenne, and Nebraska Sandhills over the weekend

***The images used in this article were provided by Windy, PivotalWeather, and NOAA.