A powerful Winter Storm is underway, forecast to bring major snow with ice and pretty cold temperatures across a large part of the East, and Northeast U.S. this weekend holidays. The storm system has got the name Izzy and will impact more than 100 million people along its path through Saturday into Monday. The storm is triggered by the intense Polar Vortex lobe over Canada, boosting the winter weather forecasts, expected to result in major travel delays in both road and air traffic through Monday.

After an unusually slow start of the Winter Season 2021/22, it has been wild ice-cold, and snowy weather across parts of Canada and the United States over the past few weeks. Thanks to very powerful Polar Vortex dynamics recently, frigid cold temperature outbreaks are being pushed down from north to south across the North American continent. 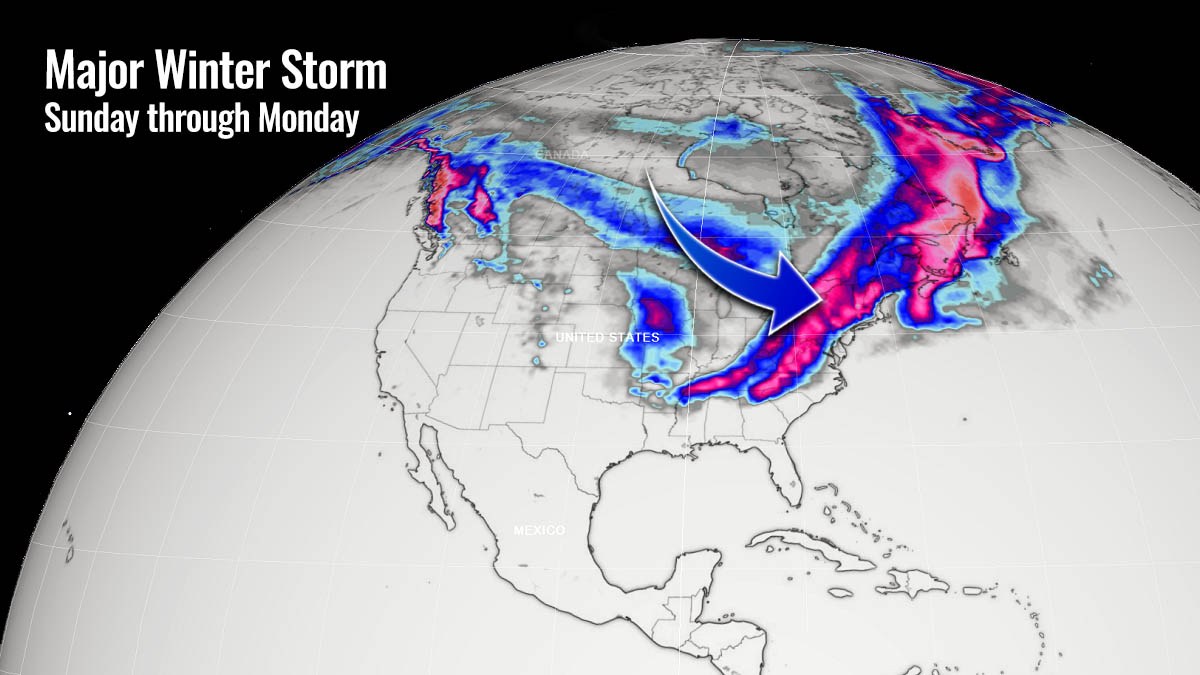 This Friday, a quick-moving winter storm was emerging across the northern Plains into the Ozarks with major snow across the Midwest. A zone of heavy snowfall and near-blizzard conditions with about 8 to 12 inches of snow is underway from the eastern Dakotas to northern Missouri.

Millions are already under the winter storm warnings across the Midwest with more watches and ice storm warnings in place ahead of the incoming storm for the East and Northeast U.S. 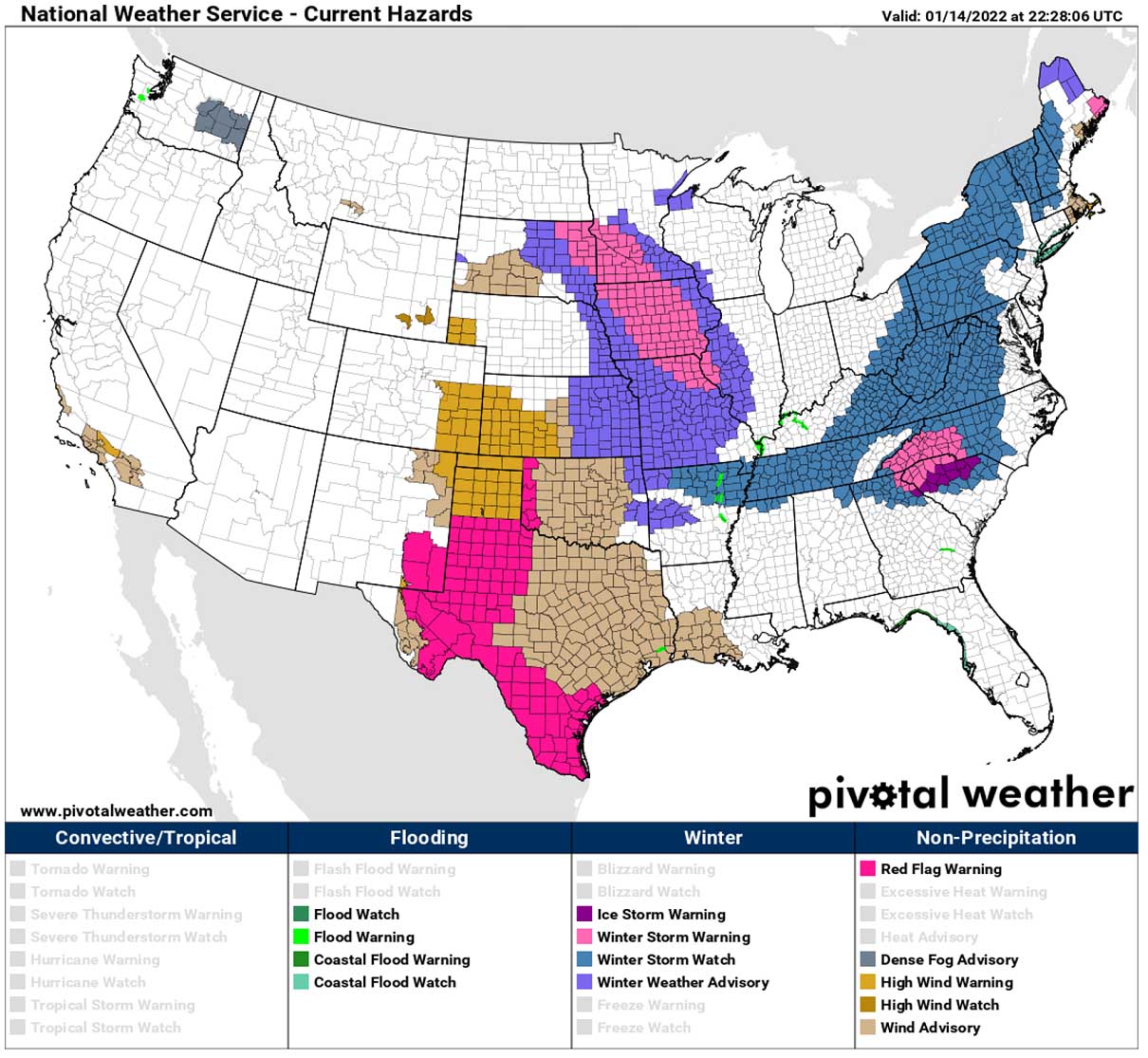 The system will then continue further south on Saturday into Sunday, emerging into the Southeast U.S., becoming a Major Winter Storm before turning towards the East Coast and the Northeast. Deep snow and ice storm will follow, with the Appalachians buried in feet of deep snow.

A lot of snow will also spread farther into Northeast U.S. and southeast Canada from Sunday night into Monday.

The video animation above hints at the spread of the winter storm Izzy with snow and ice across the U.S., followed by cold temperatures from Canada into the U.S over the weekend into early next week. Notice how a particularly intense system develops, bringing the frigid cold air mass into the nation once again.

It will be a very active weekend weatherwise, with huge travel impacts for more than 100 million people along Izzy’s path. Both major snow and potential ice storm will cause delays and potential damage.

Before we discuss deeper into the weather pattern development, let’s first see what is the main driver, Polar Vortex, actually is running these winter impacts.

There are 6 atmospheric layers around the Earth, where most of the weather dynamics for all life and property on our planet happen in the lowest two. Those are the troposphere and the stratosphere right above it. 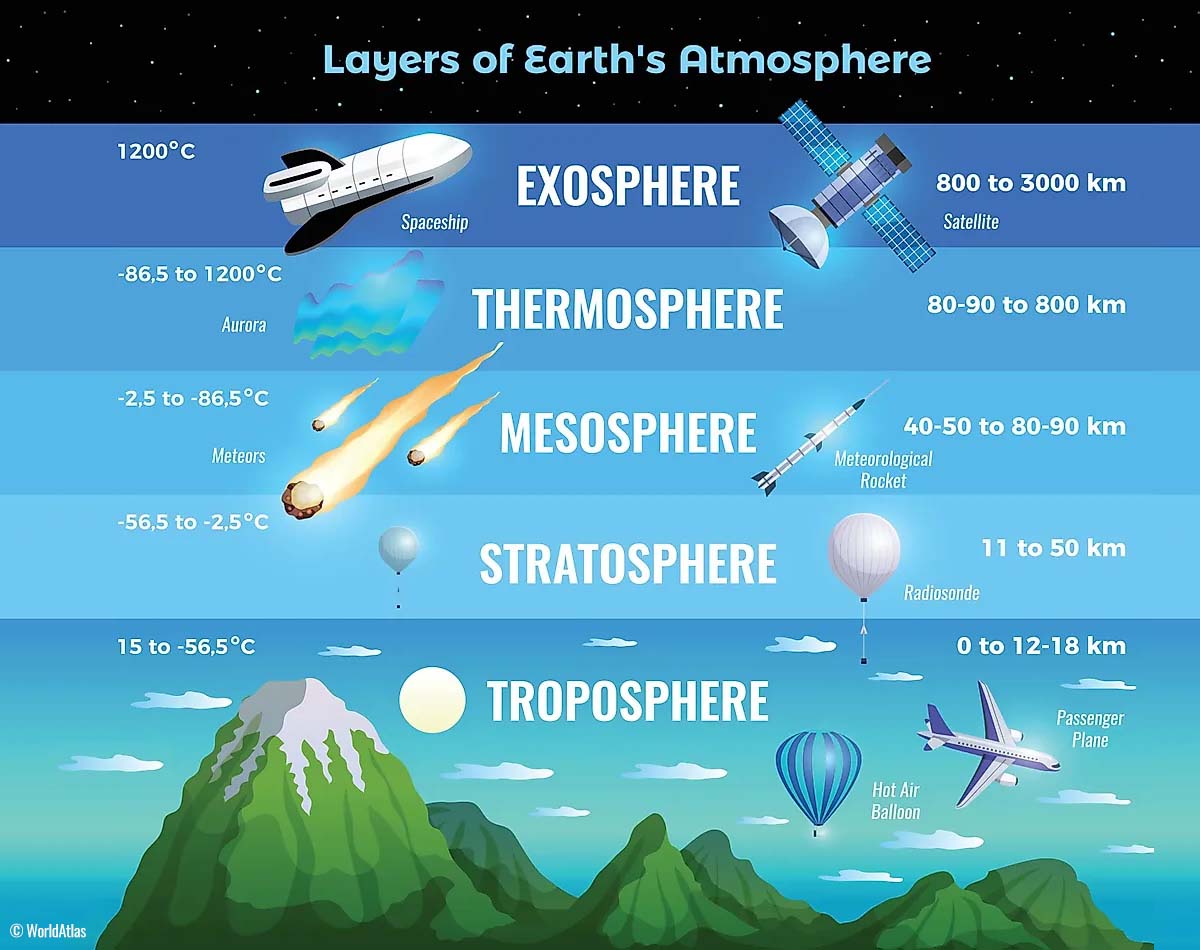 The lowest layer, the troposphere layer is where all the weather changes take place. The troposphere layer extends from the surface of the Earth, basically from the sea level up to 12 km into the sky. The depth of it, however, varies between 8 km to nearly 20 km. It is the deepest above the equator, and it gets thicker above the North and South poles. 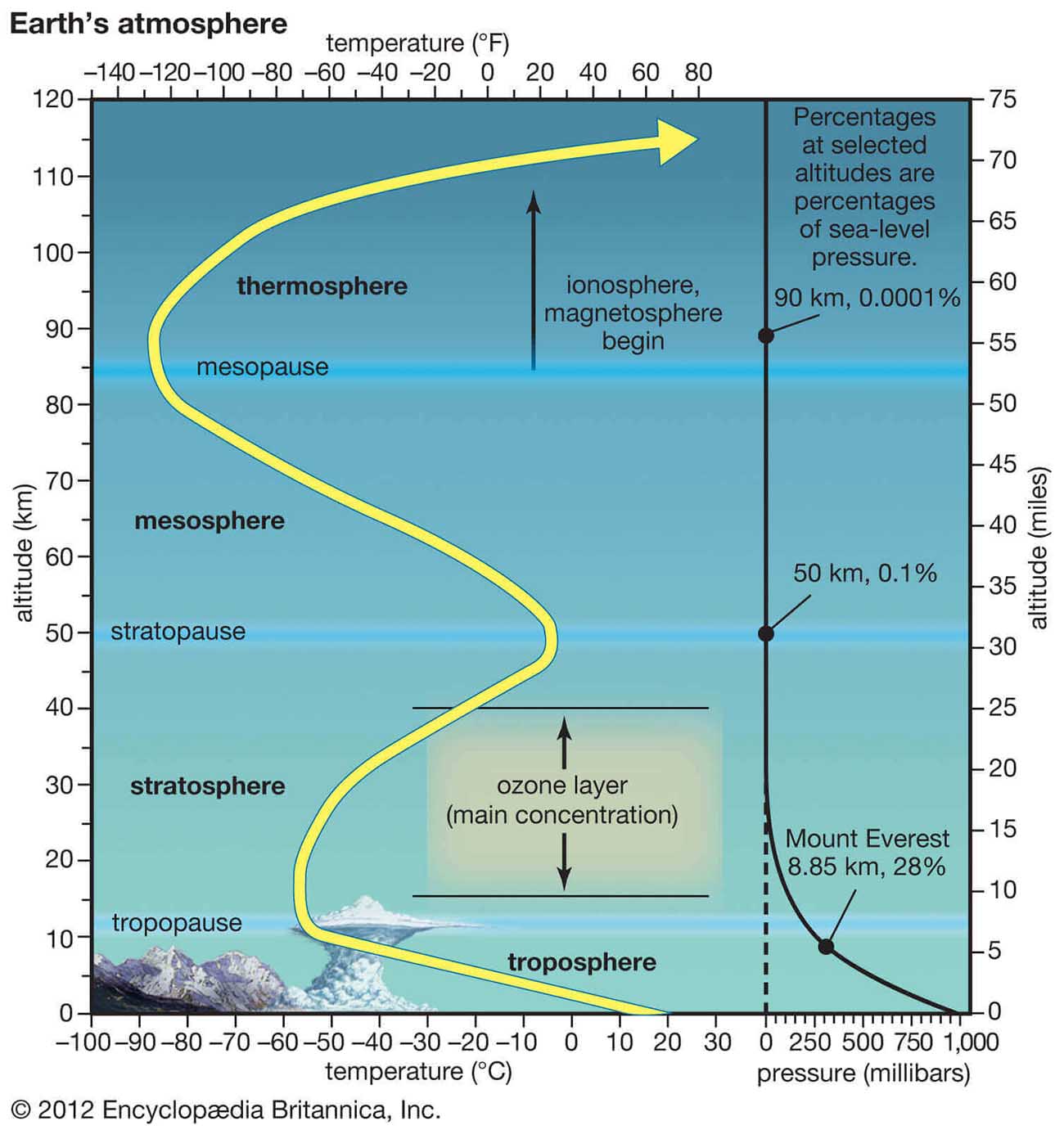 For the weather dynamics worldwide at any time, there is one very important feature in the stratosphere, known as the Polar Vortex. The Polar Vortex is an enormous, three-dimensional ring of very powerful winds, located at about 20-50 km above the Earth’s surface. It surrounds the North and South poles and is the strongest during the winter months. 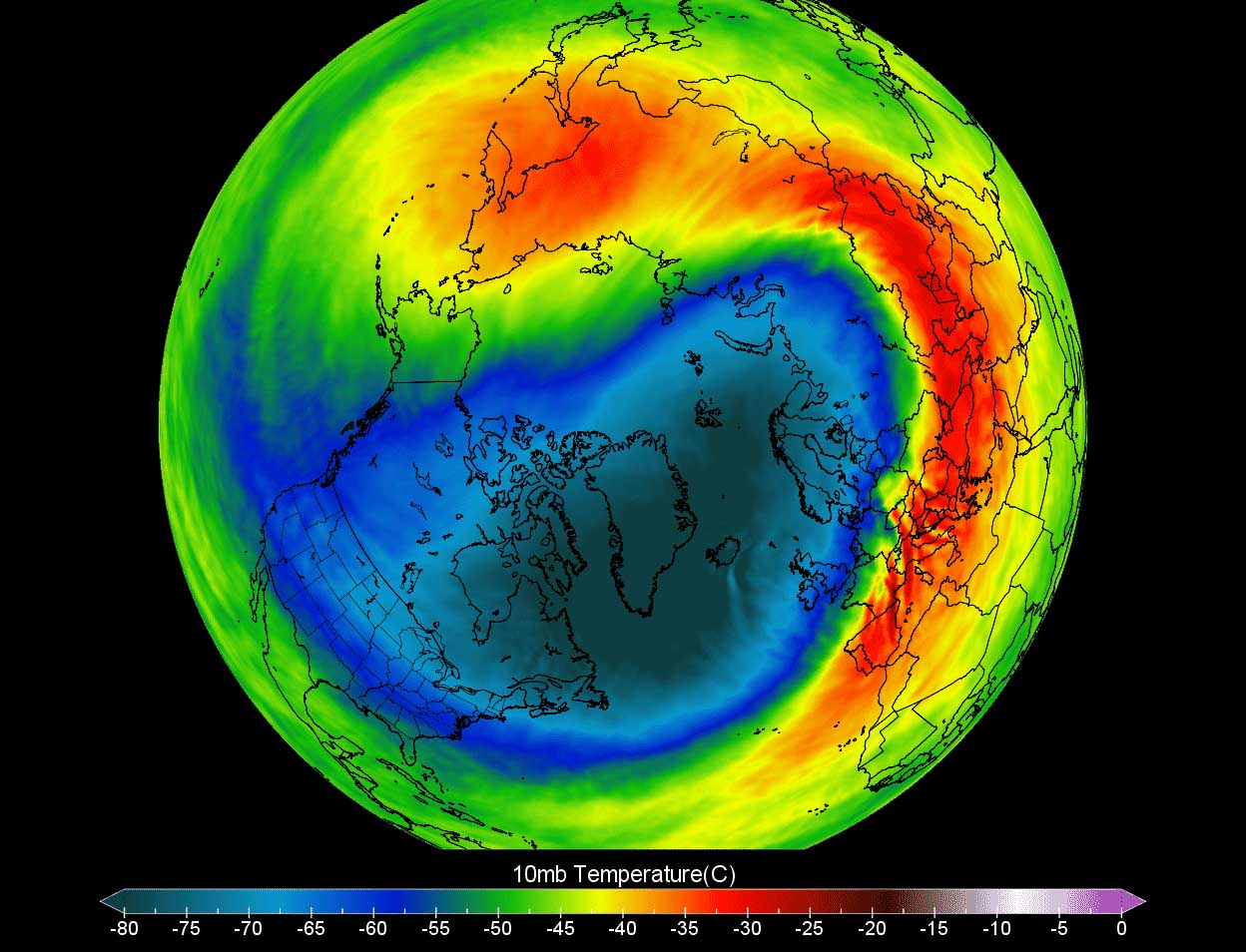 While the Polar Vortex spins high above our heads, it remains directly connected to the lower part of the atmosphere where we live. Putting it into a simple way, the Polar Vortex gives our daily weather a shape in many ways. It works as one large hemispheric circulation.

Formation of the Polar Vortex

Due to the inclination of the Earth’s axis over time, the polar regions receive much less sunlight from the autumn months onwards. The north pole is set into the position that it starts to cool down. While the poles are getting cooler with time, the atmosphere further south remains still rather warm as it continuously receives much more sunlight and energy from the Sun compared to polar regions.

So the lowering temperature over the polar regions also translates into lowering the surface pressure there. And a very similar process also occurs in the stratosphere layer aloft, leading to the strong temperature difference between the North pole and equatorial region. A large low-pressure, cyclonic circulation develops across the polar stratosphere. 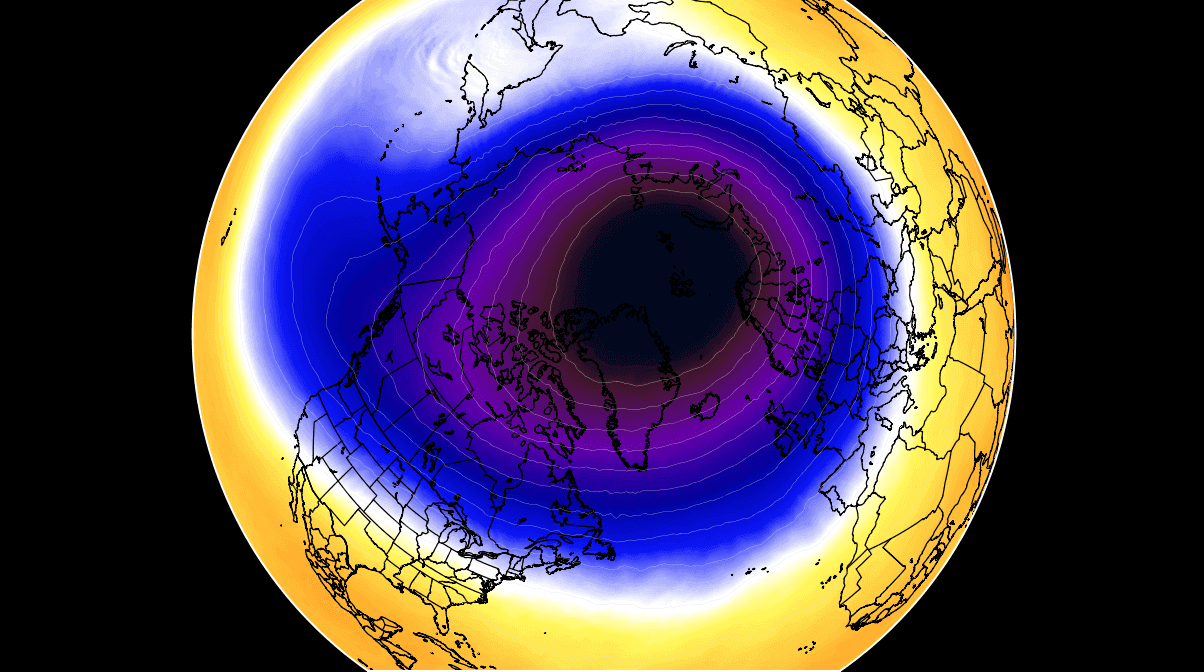 In other words, the Polar Vortex is basically acting as a very large cyclone, covering the whole North Pole, down to the regions in mid-latitudes. The same way it acts in the southern hemisphere. The weather chart above indicates a typical example of the Polar Vortex placed at around 30 km (18 miles) altitude, this is near the top of the stratosphere during the winter season.

BRUTAL COLD IN CANADA, LOTS OF SNOW IN THE WEST – A TYPICAL LA NINA WINTER

The weather pattern across North America has been very active from late December through mid-January, with often deep troughs sitting over the western part of the continent with high-pressure systems further inland. This is a typical weather pattern across Canada and the United States during the winter season that is boosted by the La Nina effects. 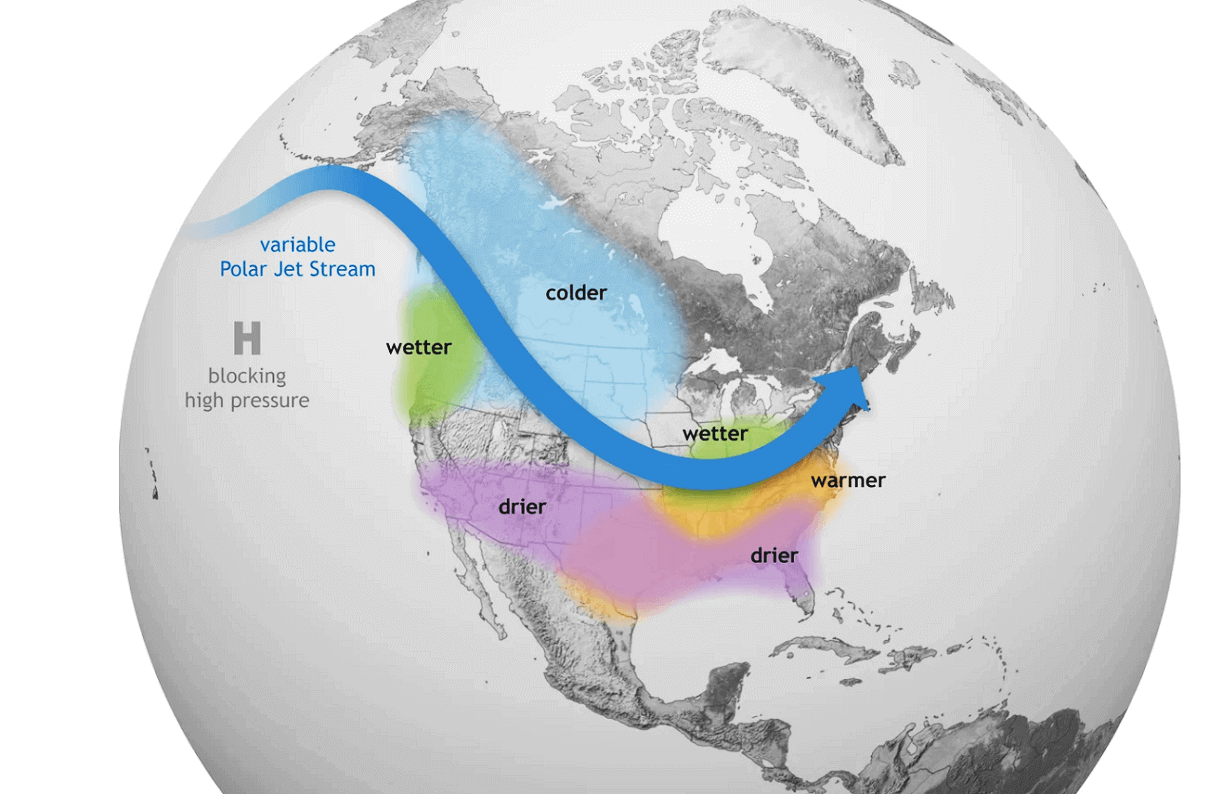 Such ENSO phase boosts the westerly jet, with multiple frontal systems racing into the Pacific Northwest, dumping tons of snow. Farther east over the continent, frigid cold temperatures develop and are often surging south, triggered by disruptions in the Polar Vortex spinning in the stratosphere aloft.

After the record snow for the Sierra Mountains of California in December, extreme amounts of snow buried the Pacific Northwest in British Columbia in Canada in early January. While areas further north and east have seen many days of frigid Arctic cold weather, temperatures surged even below -50 °C. 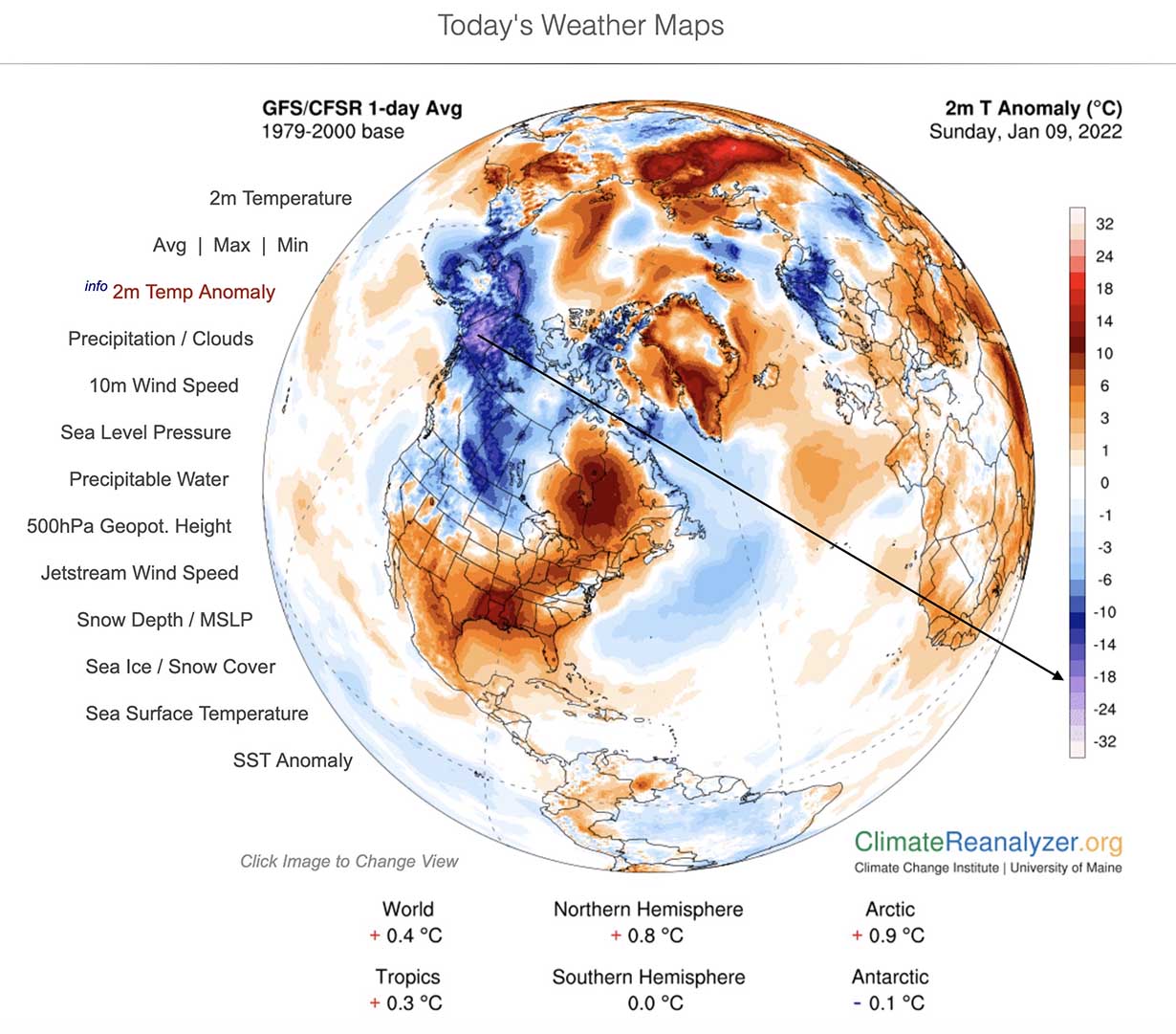 The lowest temperatures were observed over eastern Alaska and the westernmost Canadian states, Yukon and Northwest Territories. Down to -53.5 °C earlier this week. Being more than 20 °C colder than normal.

With a strong high-pressure system now developed over the central portions of the content, the pure north-northwesterly flow is resulting in another blast of much colder air mass towards the United States behind the ongoing Winter Storm. Friday’s Eve satellite picture over the Atlantic and U.S. reveals a monster storm off the East Coast, with a new one emerging into the central CONUS from the north. 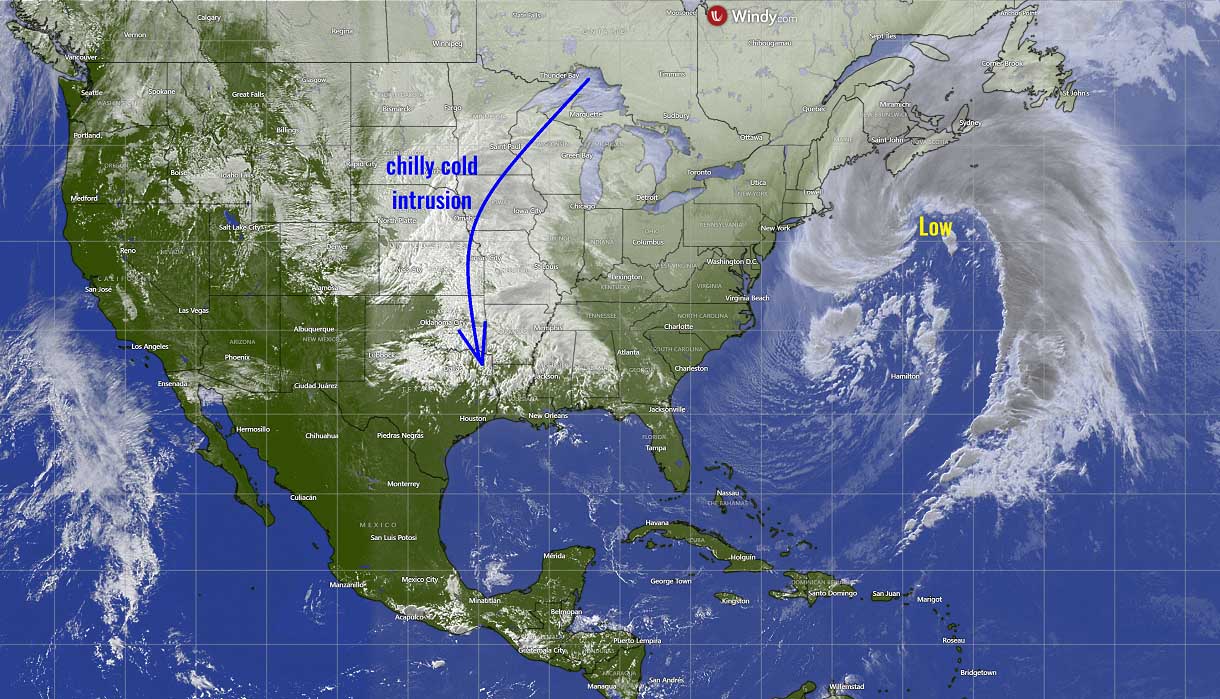 The hardest hit will be the Ozarks, receiving 8-12 inches Friday night through Saturday afternoon when the storm is finally over.

The cold in its wake will gradually increase once the system grazes farther east over the weekend and then Northeast and establishes a channeling flow from Canada next week. 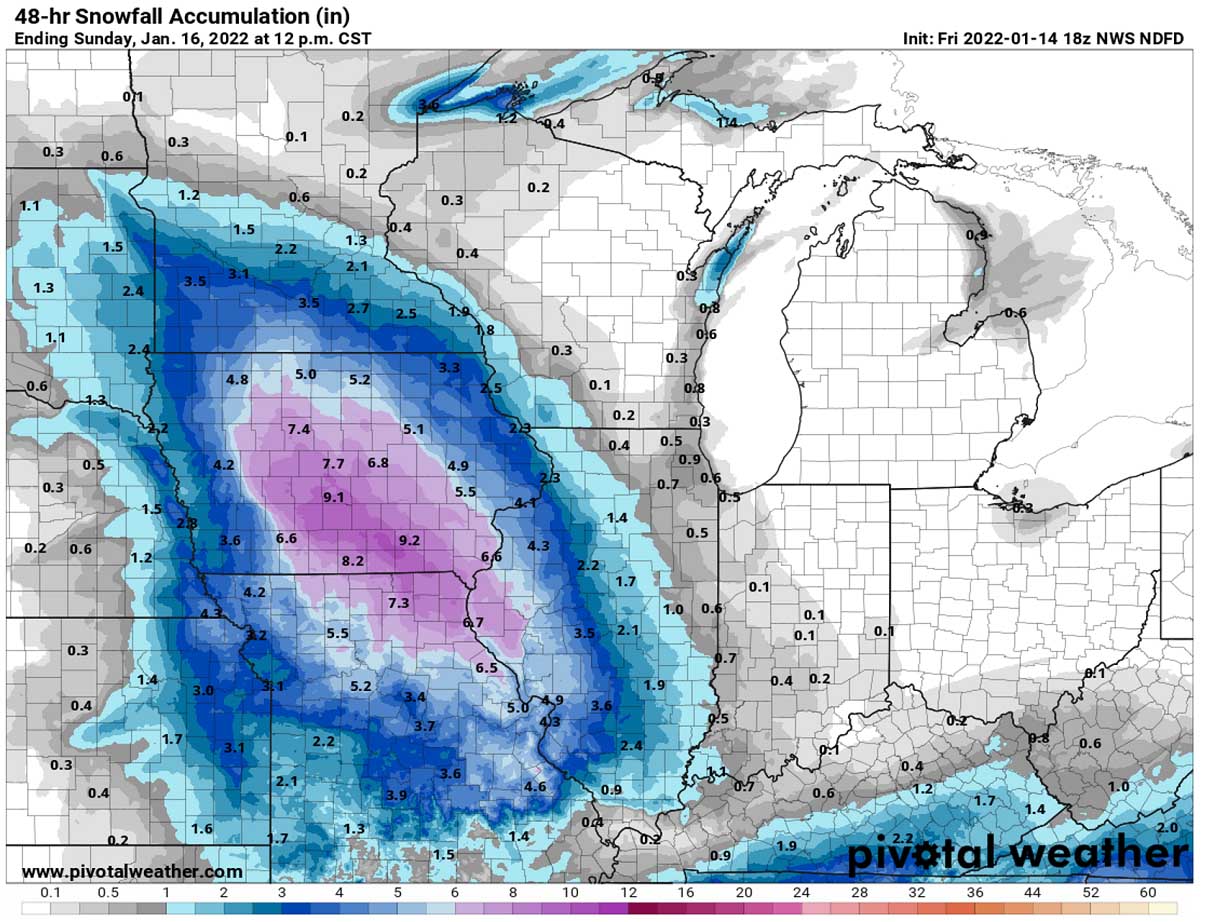 The holiday weekend is painting an interesting weather picture across North America, with strong blocking patterns across the west and central parts. To the south of its, a so-called Rex blocking pattern establishes, meaning a deep low will develop, being surrounded by the Highs. 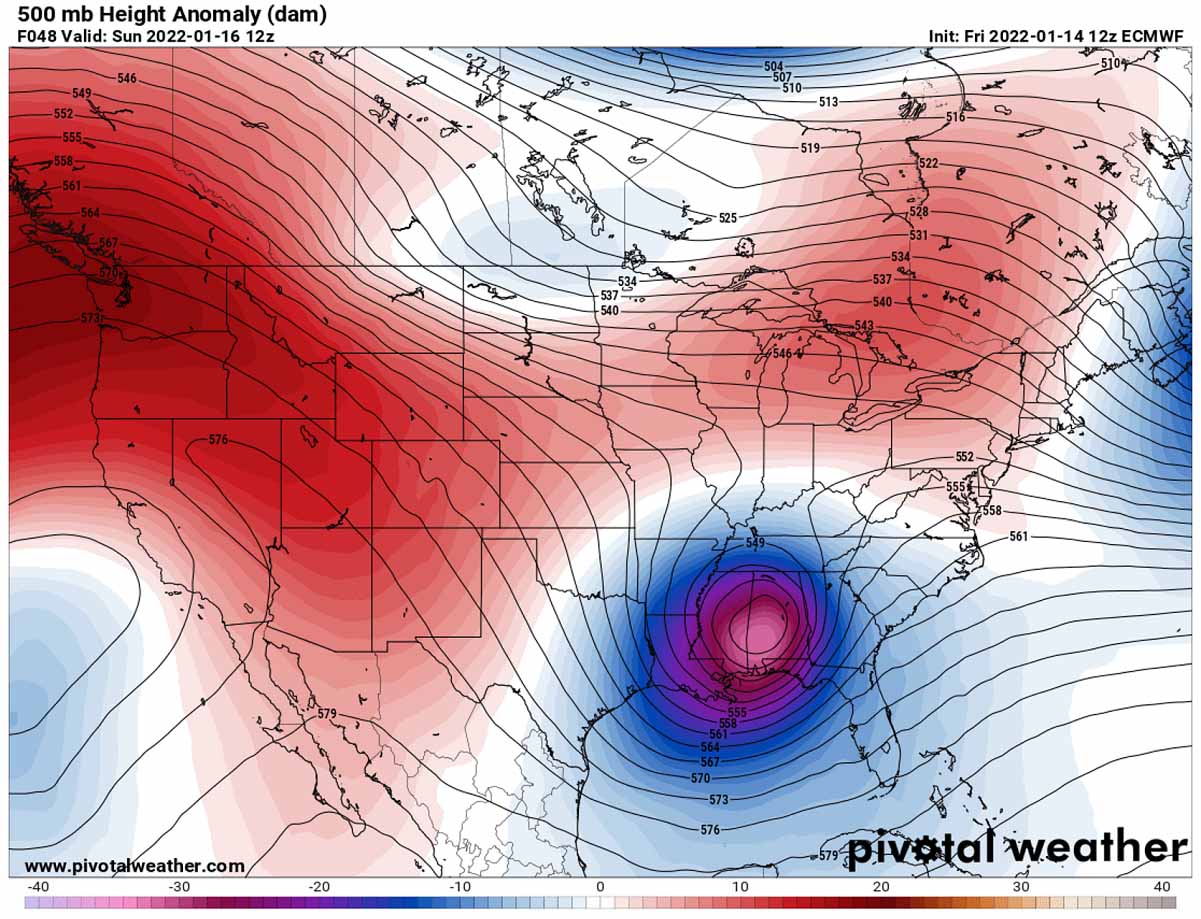 This will lead to the intensification of the surface frontal system, therefore Winter Storm conditions will worsen and bring major snow and ice potential also deeper into the East/Southeast on Sunday before turning towards the Northeast U.S. and southeast Canada on Monday.

The Arctic air mass settling into the Plains and the Ohio Valley from the north will interact with the low-pressure system and develop an area of moderate to locally heavy snow down the mid-section of the country from tonight into Saturday. 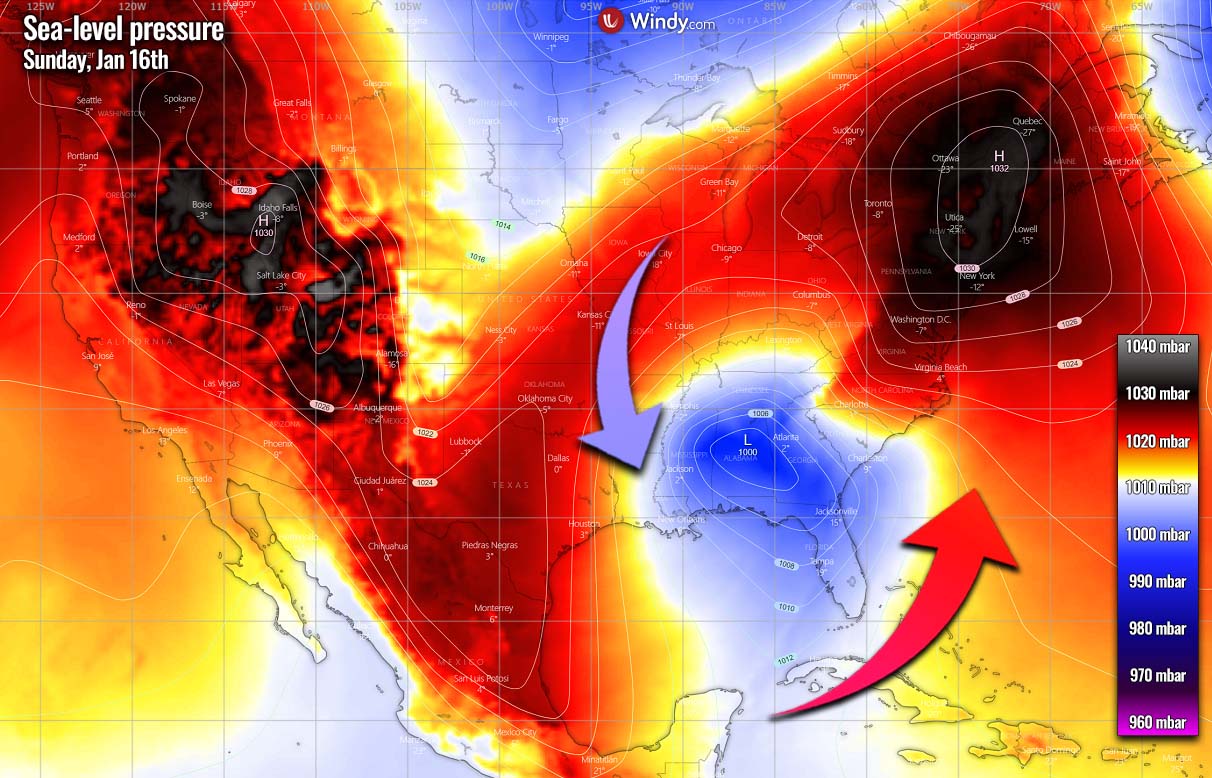 As a result of the surface pressure system under the low aloft, a combination of much colder temperatures and moisture from the south trigger heavy snowfall along the broad swath from Tennesee across Carolinas towards New England.

Up to 10″ of snow is forecast over western and far eastern Tennesee, extreme northwest Georgia, western Carolinas possibly up to 15″ in some areas. Even deeper snow across the Appalachians. Also farther north into Pennsylvania and New York states. More than a foot of snow is possible around the eastern Great Lakes into southern Ontario, Canada. 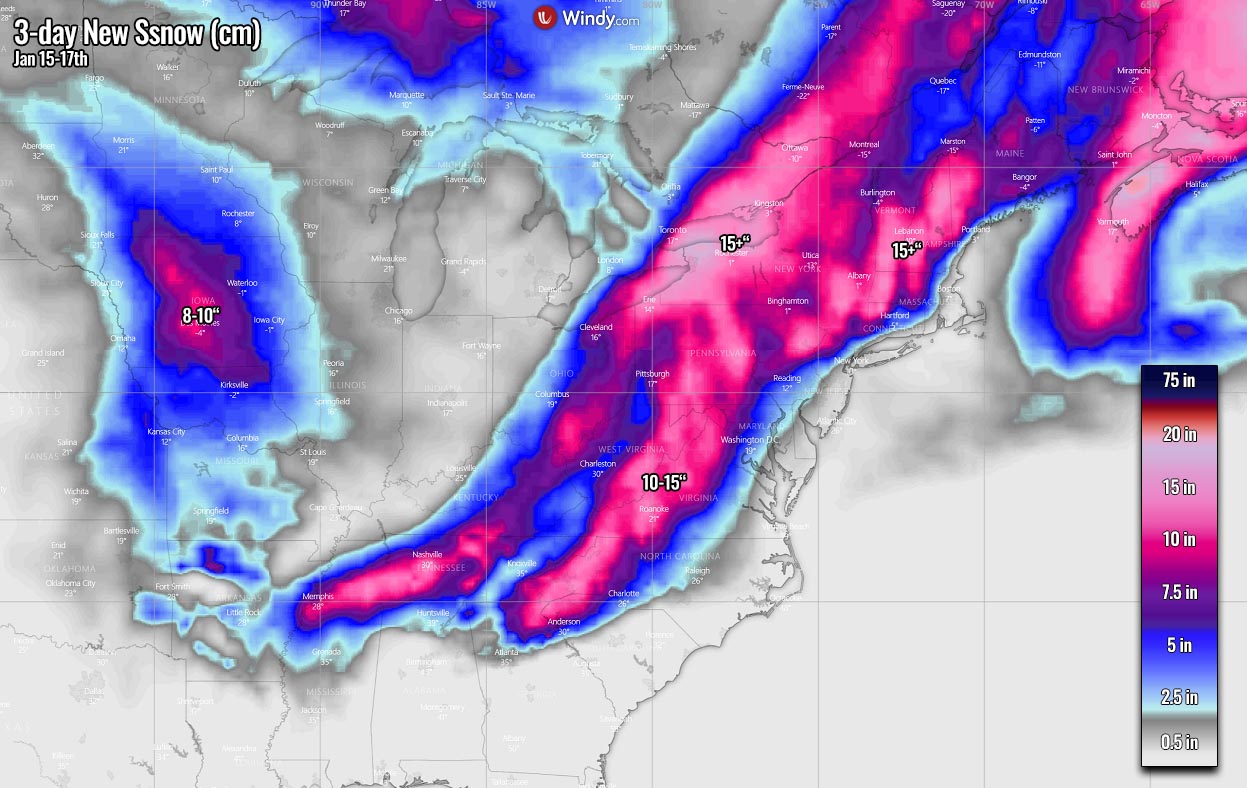 Heavy snow which could be mixed with sleet will also spread into the mid-Atlantic states on Sunday. The snowstorm will then continue across the rest of the Northeast Sunday night into Monday morning. More than a foot of snow seems likely across portions of New Hampshire and Vermont.

At the time the system emerges across the Mid-Atlantic, its central pressure considerably deepens into a powerful Nor’Easter storm. This will introduce strong to locally severe winds along the East Coast and New England. 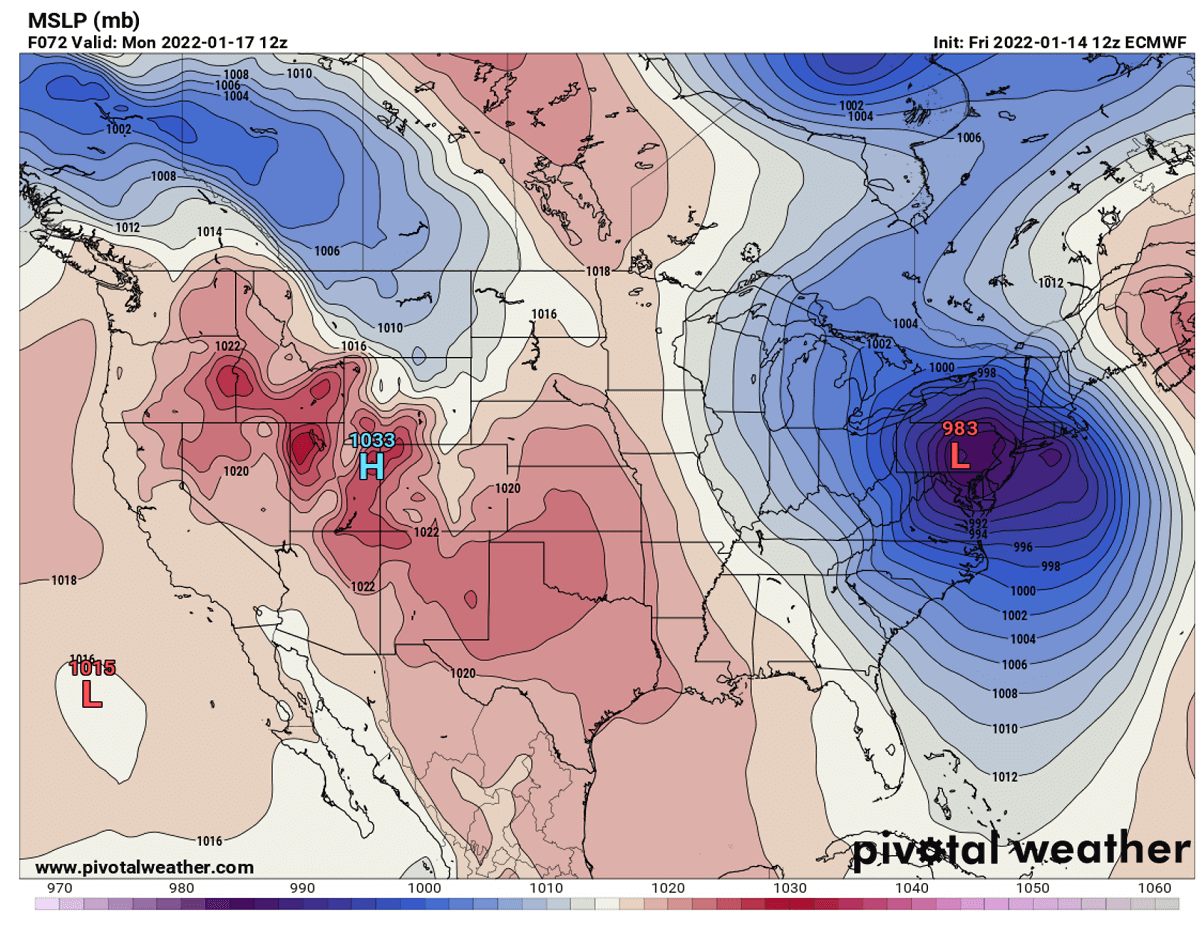 A major winter storm Izzy with heavy snow and blizzard conditions will continue across New England on Monday, becoming particularly intense for portions of Nova Scotia, Canada as well.

DANGEROUS FREEZING RAIN AND ICE STORM FOR THE MID-ATLANTIC STATES

With the significant air mass interaction between the warmer south and the cold northerlies, the upcoming frontal system could be dangerous for the Mid-Atlantic region on Sunday. There is higher weather model confidence putting a risk for icy conditions from the central Appalachians farther north-northeast through Sunday evening.

When proper weather conditions are met, freezing rain potential develops. Typically this happens when the layer of freezing air is so thin that the raindrops don’t have enough time to freeze before reaching the ground. Instead of the droplets would normally become snowflakes or sleet/graupel, the water freezes in contact with the surface. Thus, creating a coating of ice (black ice) on whatever the raindrops contact. 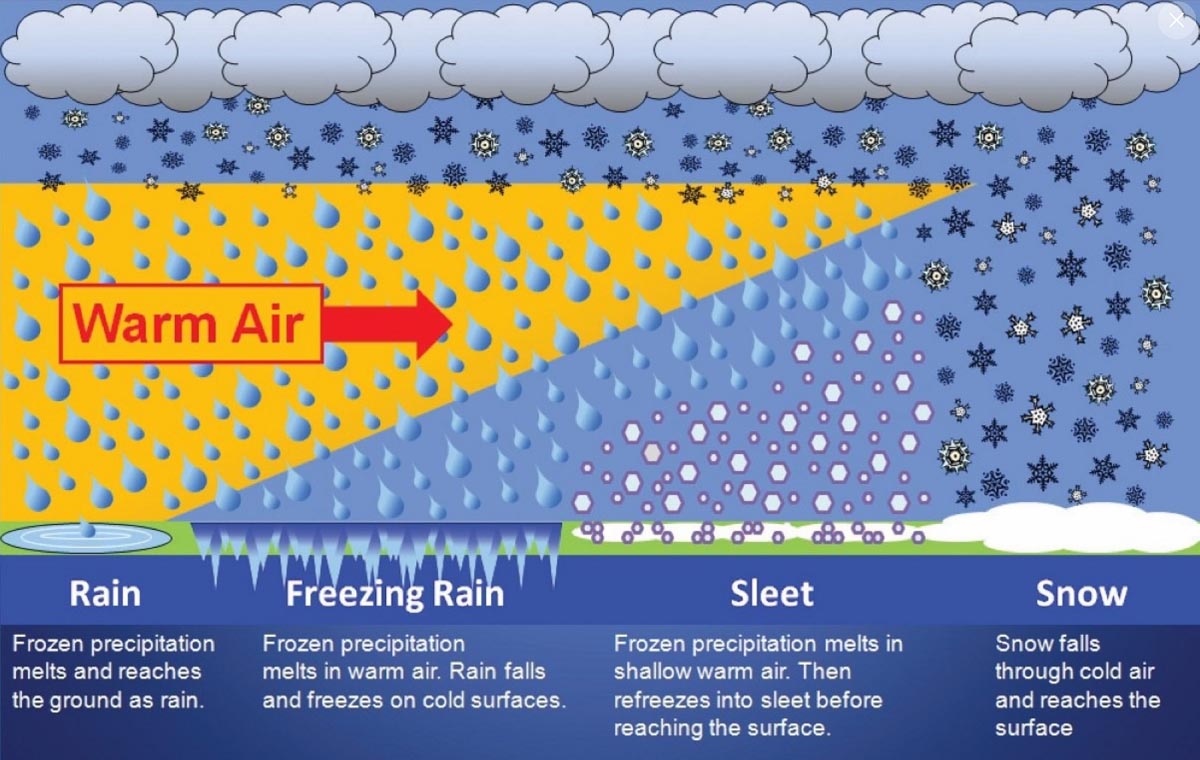 With a deep surface low traveling from the Southeast states strengthening towards the East Coast, a quite strong warm air mass is spread head of it in the mid-levels, while cold remains near the surface. Creating a high potential for freezing rain during part of the winter storm emerging from the southwest.

Although the amounts of freezing rain are not forecast to be particularly huge, at least portions of the Appalachians from western Carolinas into central Virginia could see up to around an inch of freezing rain. Such an amount could cause damage to trees and possibly even powerlines, especially as winds will also increase with the deepening surface low moving along the East Coast.

Even minor freezing rain events can still lead to dangerous driving conditions, power outages, and damage. Icy roads are often the main cause of deadly accidents on highways.

Soon after the frontal system ejects off to the Northwest Atlantic early next week, the general weather pattern develops more extreme, frigid cold from Canada into the central and eastern portions of the United States. Again, a strong dipole weather pattern develops over North America, meaning strong High over the western and deep low to the east, leading to Arctic cold air mass intrusion far south behind the winter storm Izzy. 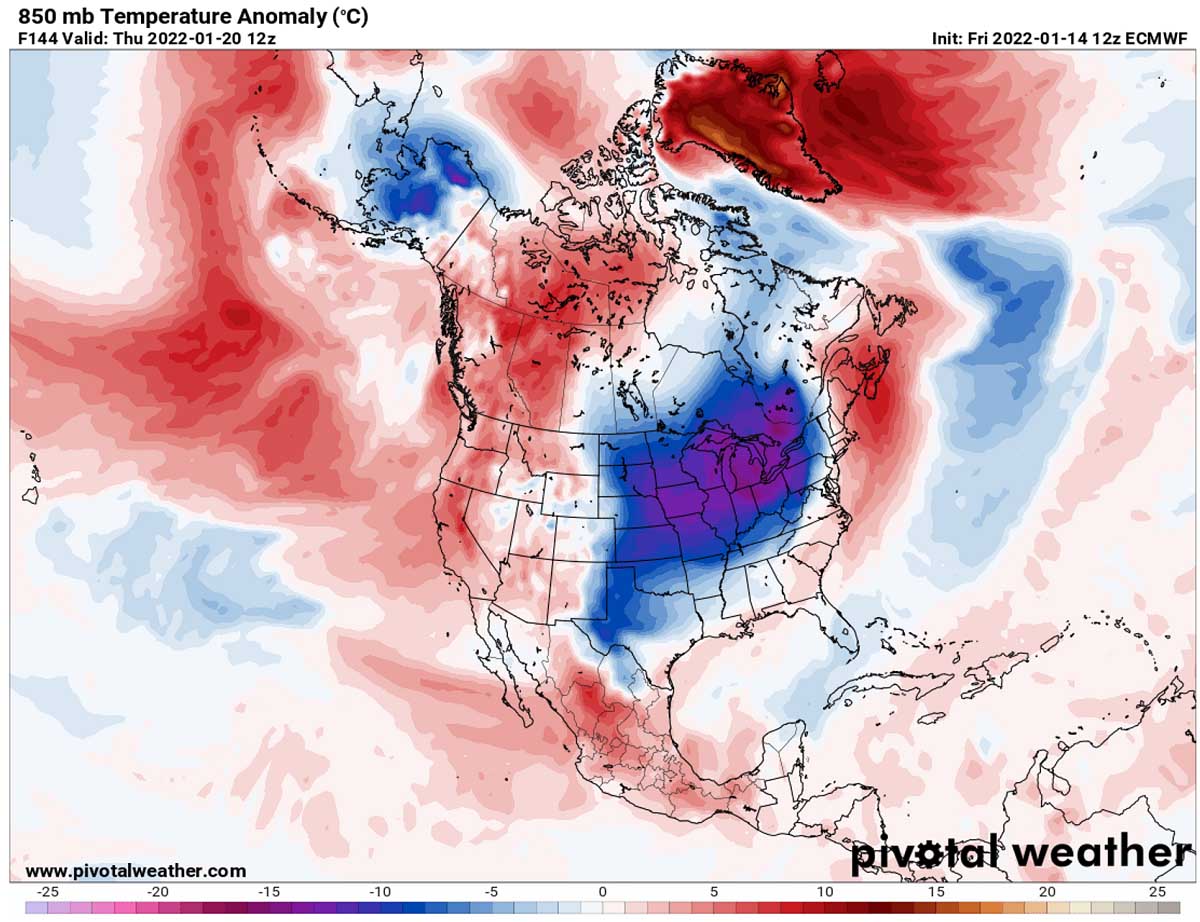 The strong blocking High on the west brings warmer than normal temperatures for the western U.S. and Canada. To the east, a deep low over the Northwest Atlantic introduces strong northerlies towards the Midwest and Great Lakes through middays next week. It will be particularly cold there and likely to bring more lake-effect snow as well.

Images used in this article were provided by Windy and Pivotalweather.

A cross-polar flow will bring waves of cold weather into the United States, boosted by the Polar Vortex as we head for the second half of January